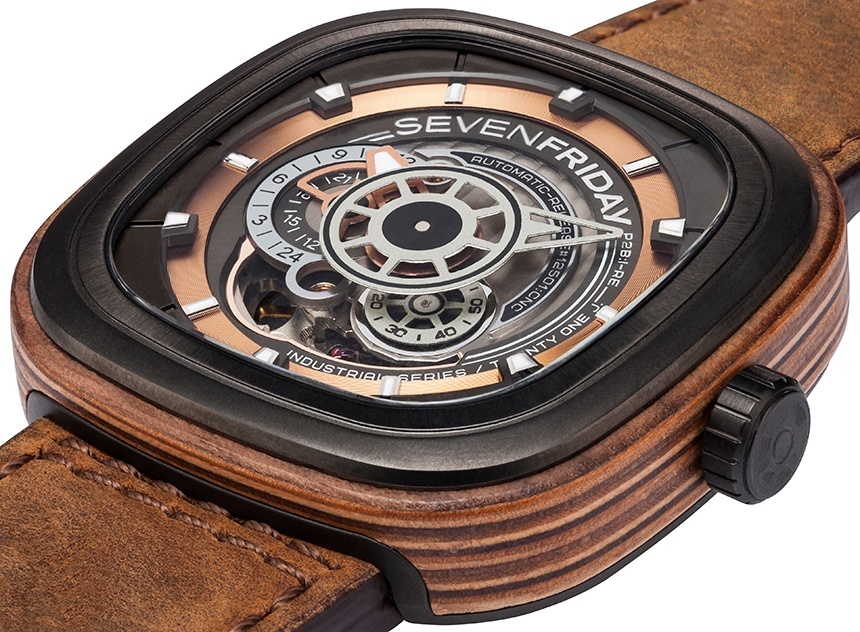 As if SevenFriday weren’t already a conversation-starter, something like this on your wrist is sure to get comments. Here, we have a new limited edition of the brand’s avant-garde flagship model, the P-series, with a case surrounded in wood. And we must give SevenFriday credit that this is not just another instance of a limited edition with mixed and matched colors – so don’t get too distracted by the wood because, in fact, there is much more to this SevenFriday P2B/03-W watch that is noteworthy. Refinements and upgrades on this model go a long way in adding to its appeal. 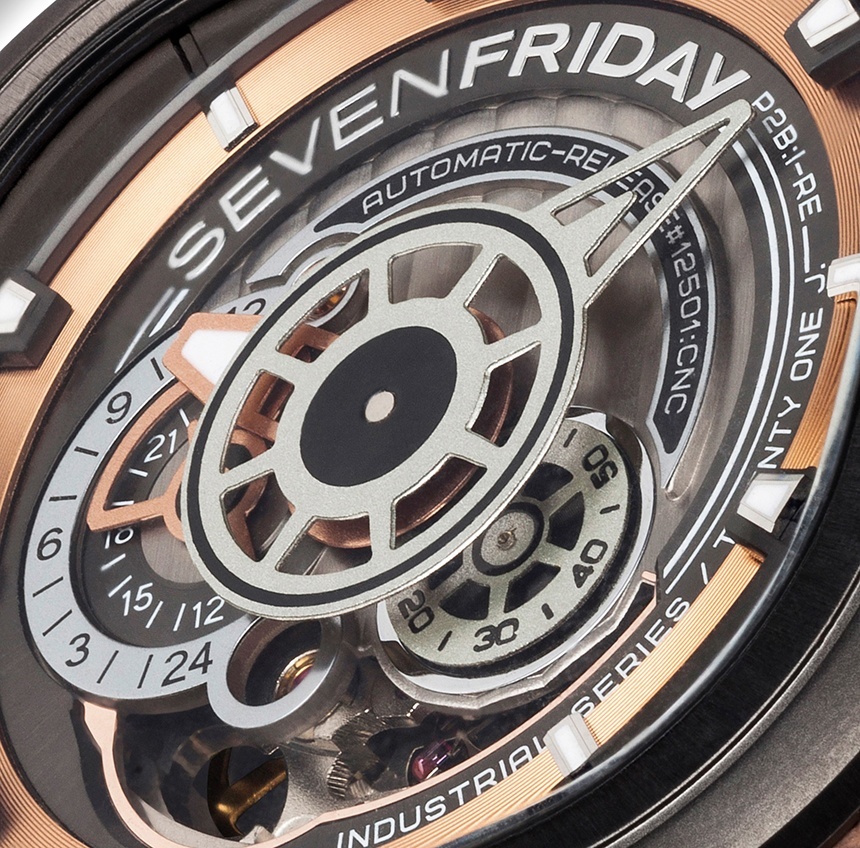 The brand’s die-hard fans will probably know that this is actually not the first time for SevenFriday to use wood in their watches – the first was back in 2013, with the P3/2, which I somehow missed at the time. Apparently, the model was nicknamed the “Woody” by the public, and SevenFriday now also actually refers to this new model as such (I will leave any puerile comments about the name to our clever audience). The earlier SevenFriday Woody was successful and sold out, so SevenFriday decided to bring it back, with the benefits of matured design and new technology. 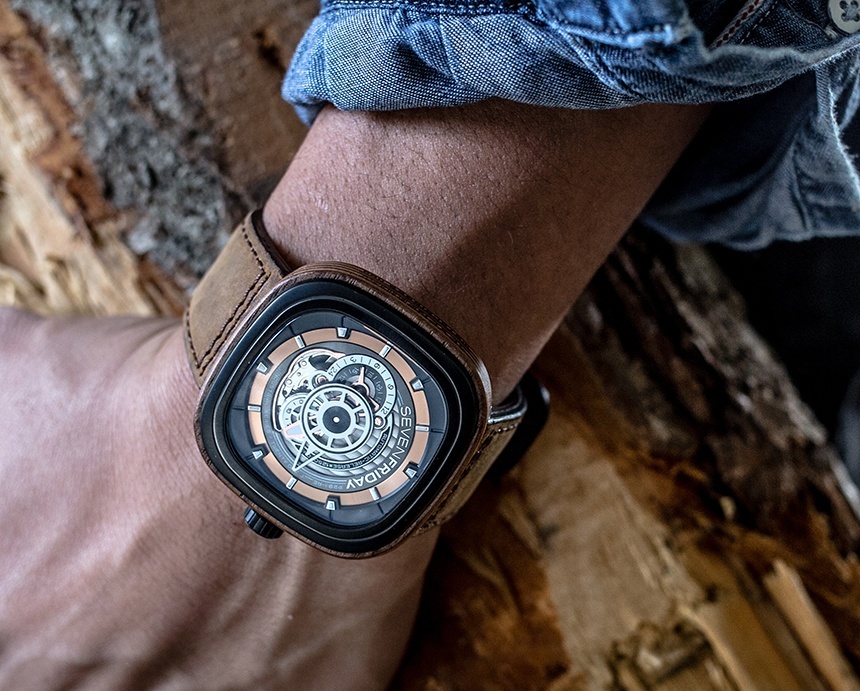 Now, if you are new to the brand, let me try to quickly summarize what you should know. SevenFriday is based in Zurich, Switzerland, and the designs are all Swiss. They have become a fashionista-favorite because, largely thanks to the Japanese movement and Chinese construction, they have managed to keep the prices down, while maintaining a distinctive and avant-garde design with plenty of personality, high-quality construction, and a solid following. These are large, eye-catching watches that remain wearable on more wrists because they are lugless – meaning the strap attaches directly to the case. We have discussed extensively each of these topics and more details about the brand before here on aBlogtoWatch, so I recommend checking out our other SevenFriday articles to learn more about them. 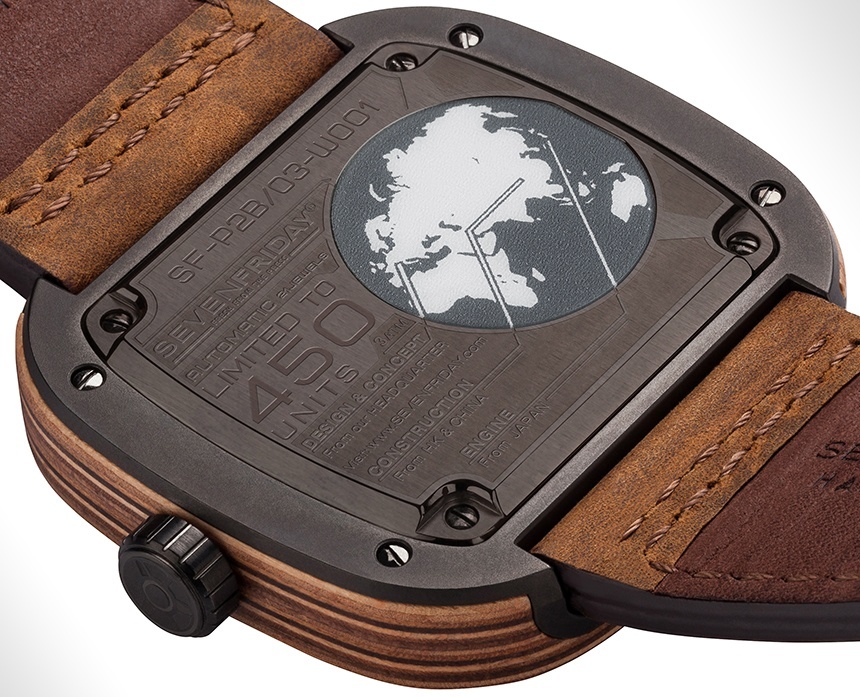 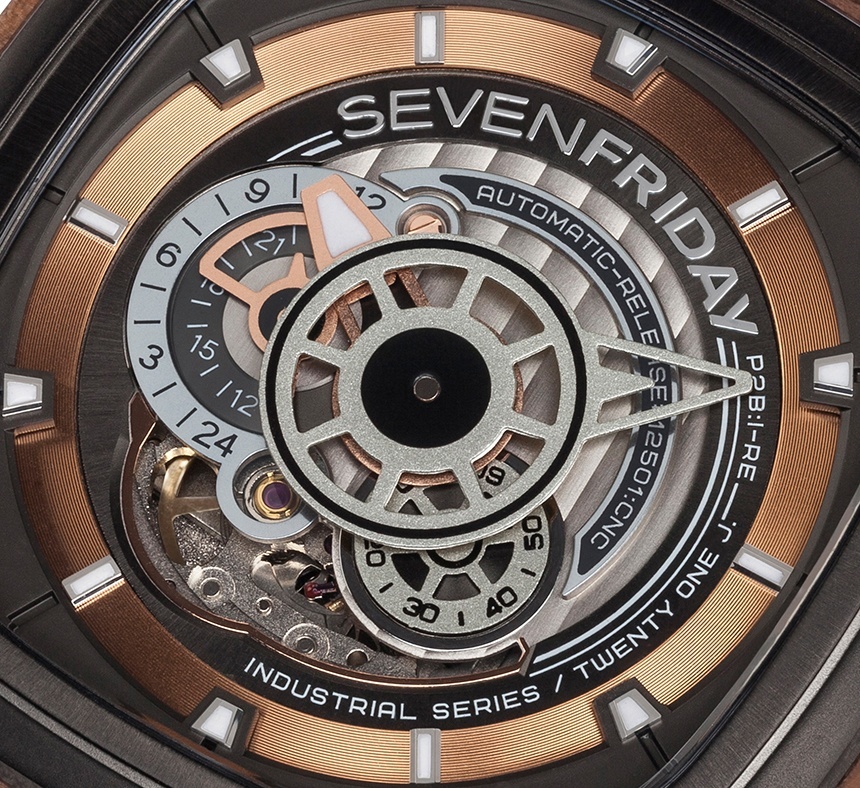 SevenFriday has three series, the P, the M, and the V – differentiated by cases and dials – and there are then numbered series within each of those. The design of this SevenFriday P2B/03-W Woody limited edition, falling within the P2 “Industrial Revolution” series, is “inspired by historic industrial production methods, hand hammered copper, old iron tools and the art of wood joinery.” If that’s not enough imagery for you, the brand provides pictures of the watch in a carpentry and woodworking setting. I somehow doubt these watches will find their way onto the wrists of many calloused hands. 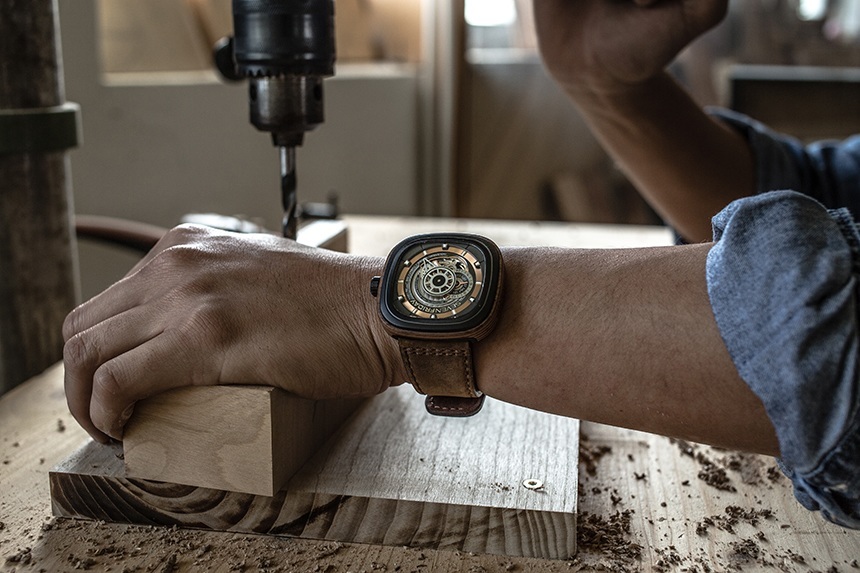 Aside from the lifestyle element that SevenFriday tries to evoke, their products seem to indeed be very fashionable at the moment, something they have been trying to match with better quality and construction for the price. They have done a good job of creating something unique and recognizable, and it really comes down to a question of your own personal style and taste whether this recognizable design speaks to you or not. Watches with a heavy fashion element are sometimes derided among us watch lovers, with the implication that quality has been put second, but SevenFriday has perhaps anticipated that criticism, and you really can’t say that about their watches. 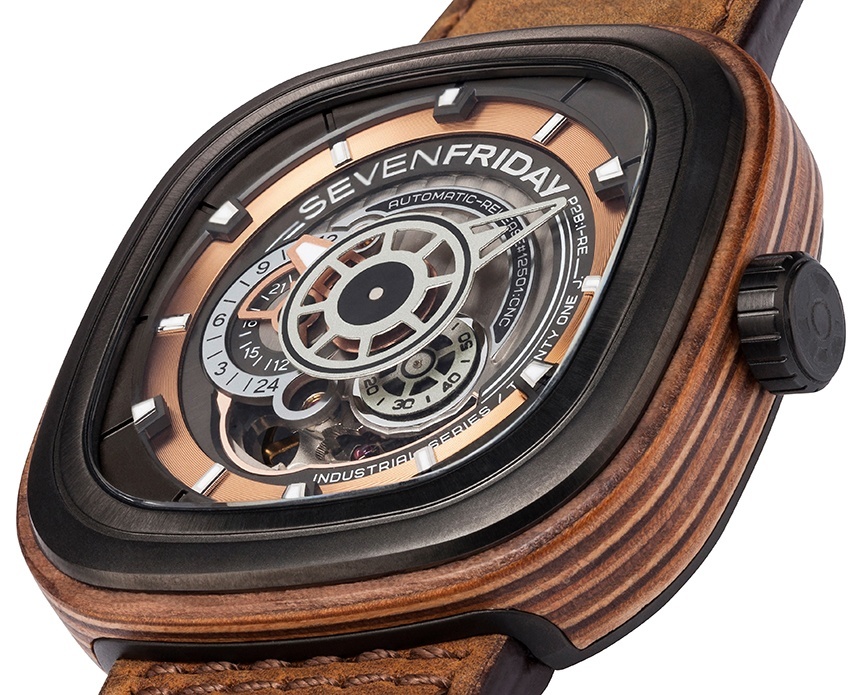 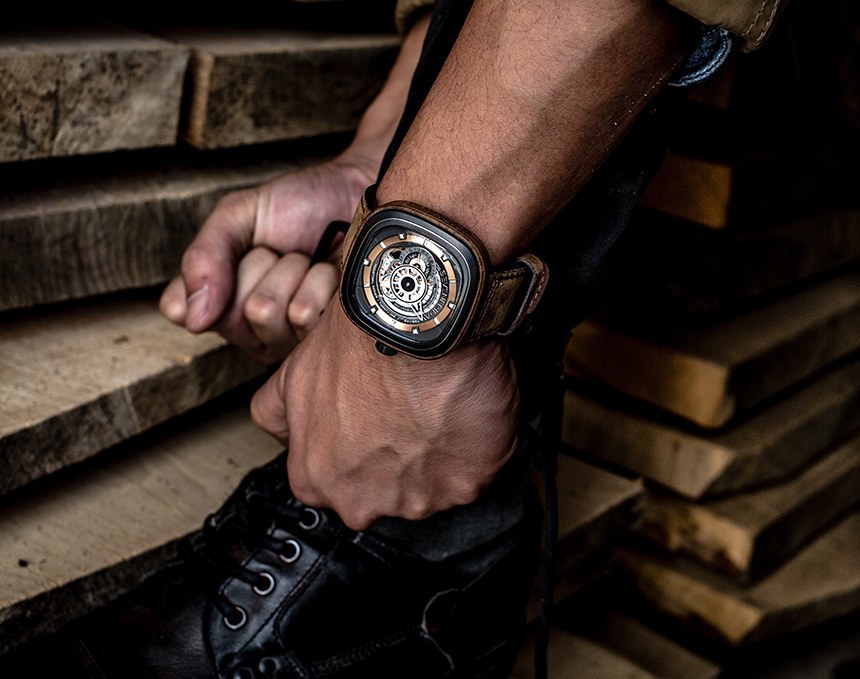 I don’t think we need to talk about the other “wooden watches” out there, do you? Just know that there are more watches out there using wood for the cases or other parts (check out the Related Posts below) – and even this guy who has actually made everything down to the movement from wood. Wood is, nevertheless, not a very common material for watches, and I do wonder how these external wooden elements on a watch will hold up over time. Probably, just fine, although we would advise against soaking them in water for too long.

Here, the SevenFriday P2B/03-W Woody surrounds the dark grey PVD-treated stainless steel case (which they call a “box”) with an outer wooden bumper (which they call an “animation ring”). According to the brand, this outer ring consists of seven layers of American walnut, beech, and cherry wood that have been individually shaped, lacquered, and layered. SevenFriday then worked with an Italian “luxury wood joiner” called Watschinger to bond them together – good to know there is a luxury wood joiner out there. 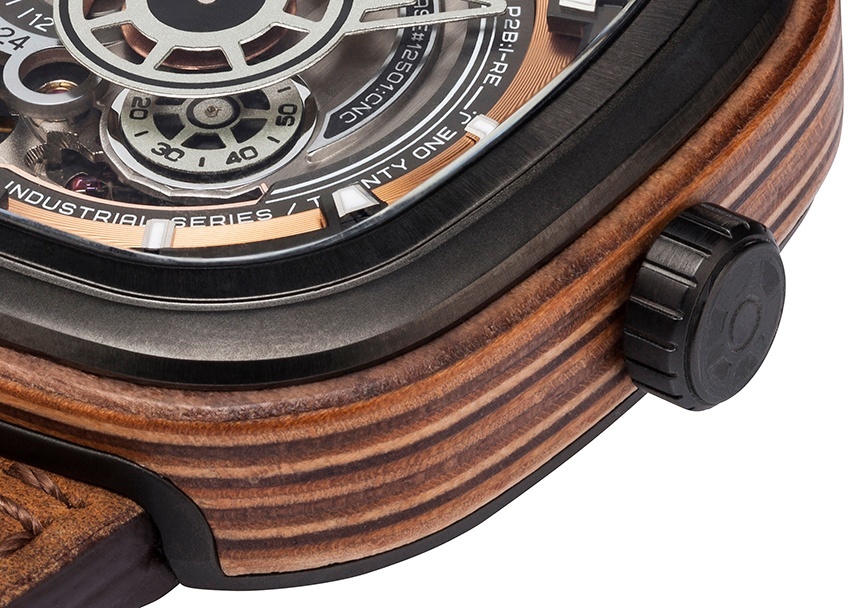 Now, I can finally get to the what is different and interesting about this SevenFriday P2B/03-W Woody model besides the wood. The dial immediately stands out with even more depth than on previous models. All of the markers are now raised, with six of them significantly more so than the others. Superluminova graces all of the hour markers as well as the hour hand – a first for SevenFriday – so you will be able to at least know the hour in the dark. Where four screws(?) decorated the dial corners on past models, inset lines now extend outward from the raised hour markers to great dimensional effect.

The disc for the seconds is now partially skeletonized, and the dial-side view of the automatic Miyota 82S7’s balance wheel is expanded. SevenFriday has played before with dial finishes we usually associate with movement decorations such as perlage, and this one uses Geneva stripes. The cumulative effect of all of these and other little design tweaks, for me, is a more refined, mature, and attractive SevenFriday P-series watch. 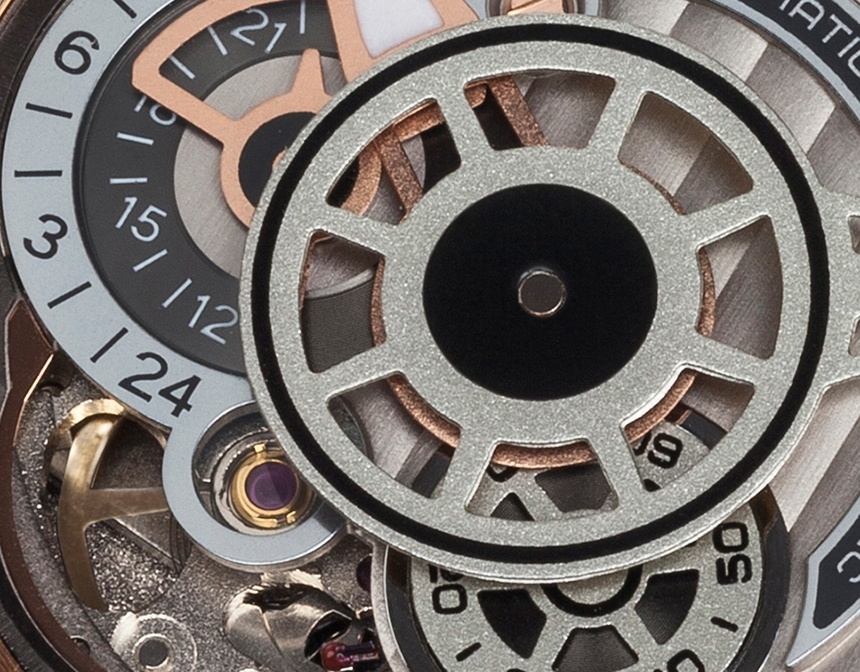 The 24-hour indicator that we know from other SevenFriday P-series models is also changed. Rather than a rotating disc, it is now two concentric half-scales each indicating half of the 24 hours. A single central hand with a short end and a long end points to the inner ring on the shorter side, which is then partially hidden when the longer end emerges to indicate the hours on the outer ring. As with the rest of the dial, it all intentionally looks much more complicated than in fact it is – time-telling is actually standard once you know what you are looking at.

Last thing: SevenFriday began incorporating an NFC or Near Field Communication chip in their new SevenFriday V-series watches (review here) for connecting with a smartphone and verifying authenticity, and they have included that technology here. I will not go into it too much since we discussed it in covering the V-series, but this seems like a cool, and under some circumstances perhaps even useful, and down-to-earth use of the technology. 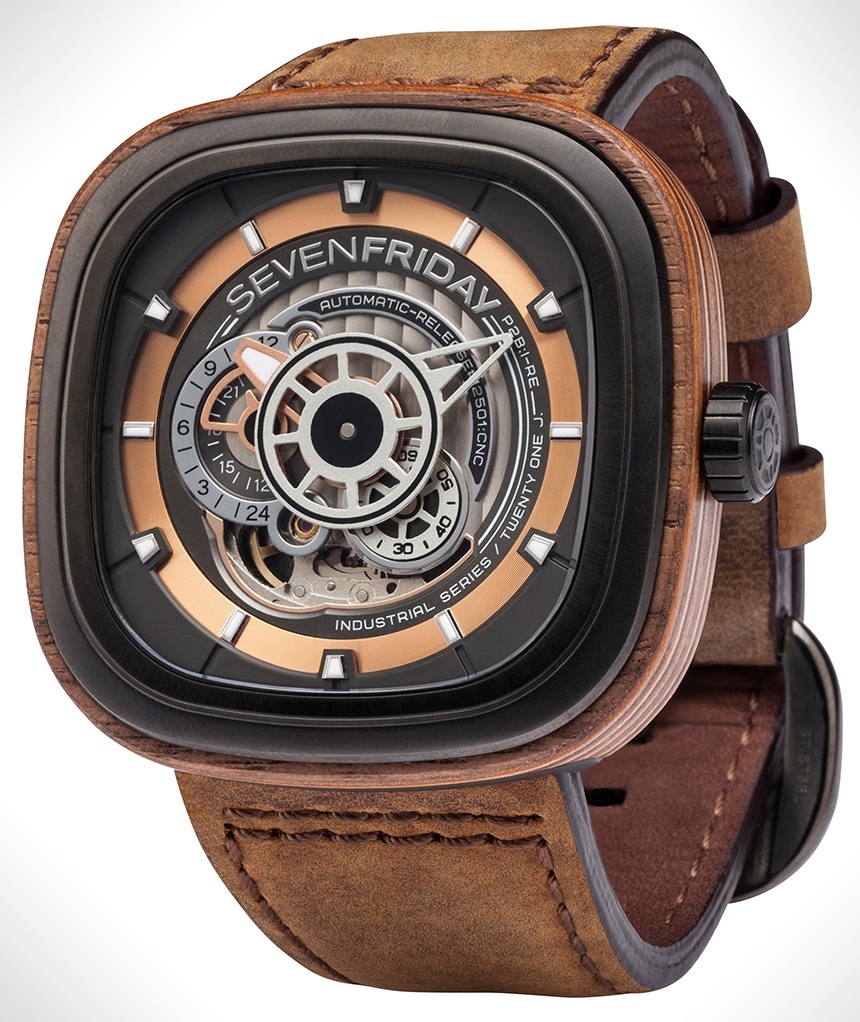 SevenFriday has come a long way, in my opinion, and some of the refinements and upgrades that this SevenFriday P2B/03-W Woody watch displays have added to the value proposition of the brand – something one would certainly expect as we are crawling near the $1,500 mark. Though, I still generally prefer the M-series. The SevenFriday P2B/03-W Woody “Off Series” (as SevenFriday apparently calls their limited editions) is 47mm wide, with mineral glass, water resistant to 30 meters – don’t go swimming in it – powered by an automatic Miyota 82S7 with 40 hours of power reserve, and comes on a brown vintage oiled leather strap – so you’re sure to be thematically coordinated with your toolshed. Available from early December 2015 and limited to only 450 pieces, price for the SevenFriday P2B/03-W Woody is 1,388 Swiss francs which, at time of writing, is very close to the US dollar. There’s a lot of competition at that price point, but not much that looks like this. sevenfriday.com