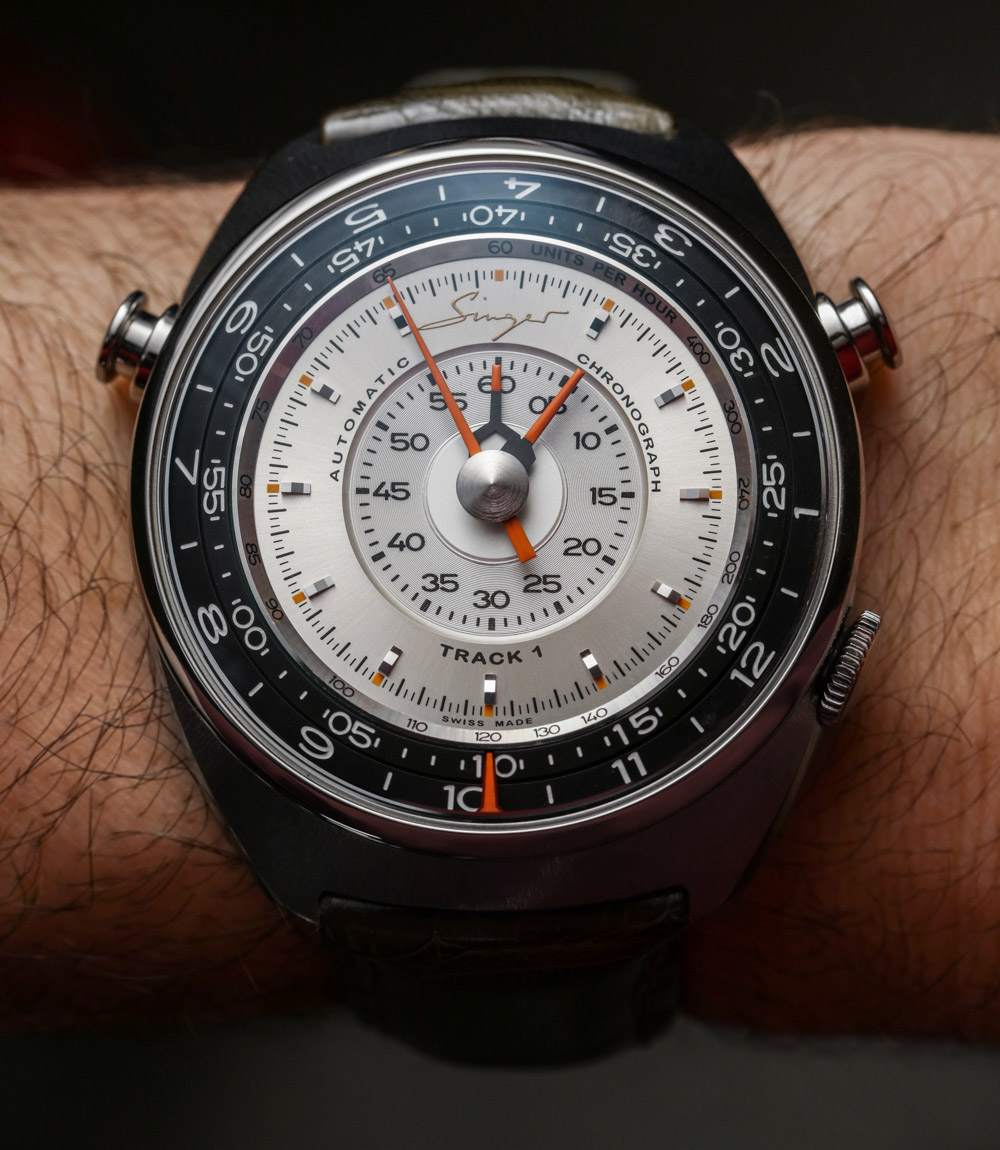 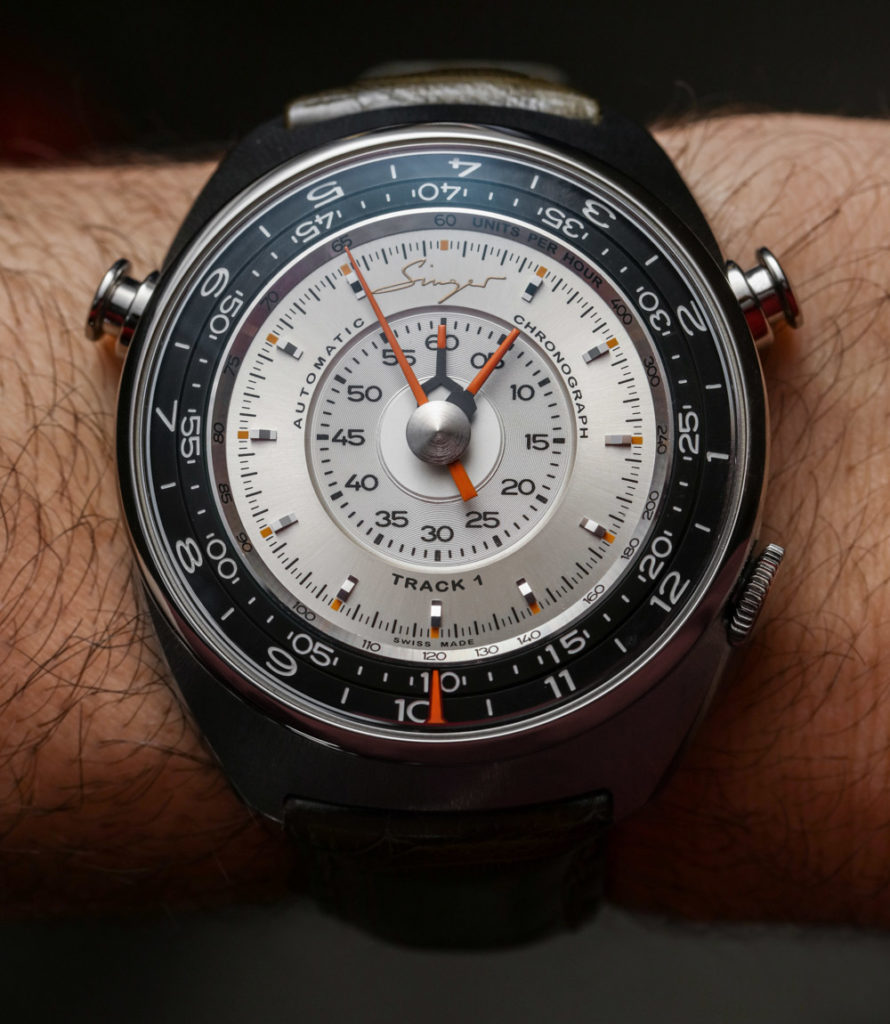 The Singer Track 1 (aka Track 1) is an unlikely product the likes of which the current watch industry needs. Representative of how collaborative projects in the high-end timepiece industry should work, the Singer Track 1 is a totally new timepiece with the brand name of a well-esteemed and very exclusive Porsche car modifier based in Los Angeles, California. It is at Singer Vehicle Design’s San Fernando Valley headquarters – a mere few miles from where I grew up – that I met with some of the team responsible for the Singer Reimagined Track 1 chronograph. It’s not everyday that a fresh (and destined to be rare) watch is launched almost in your backyard. 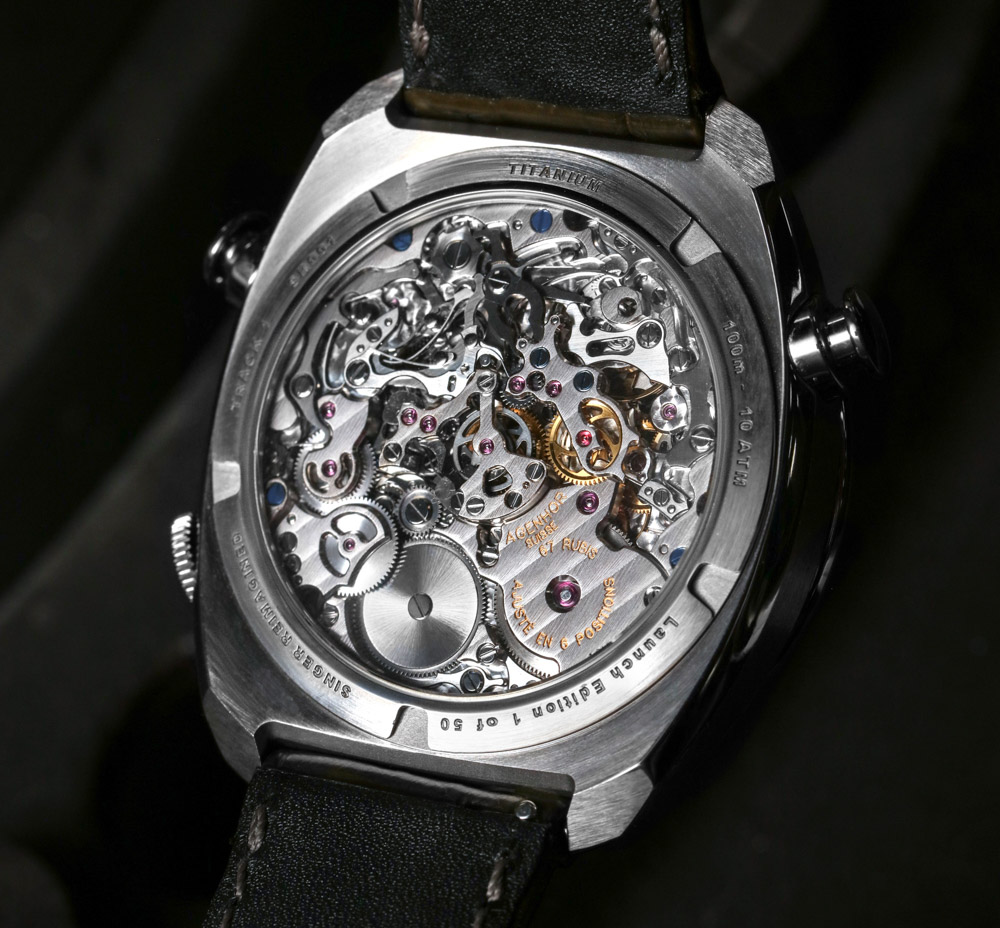 Everything about the Singer Track 1 watch makes sense if you look at the product creation’s story and team responsible for making the project happen. The story begins with watch designer Marco Borraccino, who had a vision of a watch which promoted chronograph reading legibility and that was an homage to 1960s-era racing chronograph timepieces such as those produced by Heuer. Marco happened to meet with (the Swiss watch scene is a pretty small world) well-known movement designer and manufacturer Jean-Marc Wiederrecht who founded the esteemed Geneva-based firm Agenhor. After Marco shared some concept designs with Jean-Marc, it had turned out – quite by coincidence – that Jean-Marc had a previously unimplemented mechanical movement concept which would fit Marco’s watch design idea. Without a brand or a partner to make the watch for, the duo decided they needed to go “independent.” 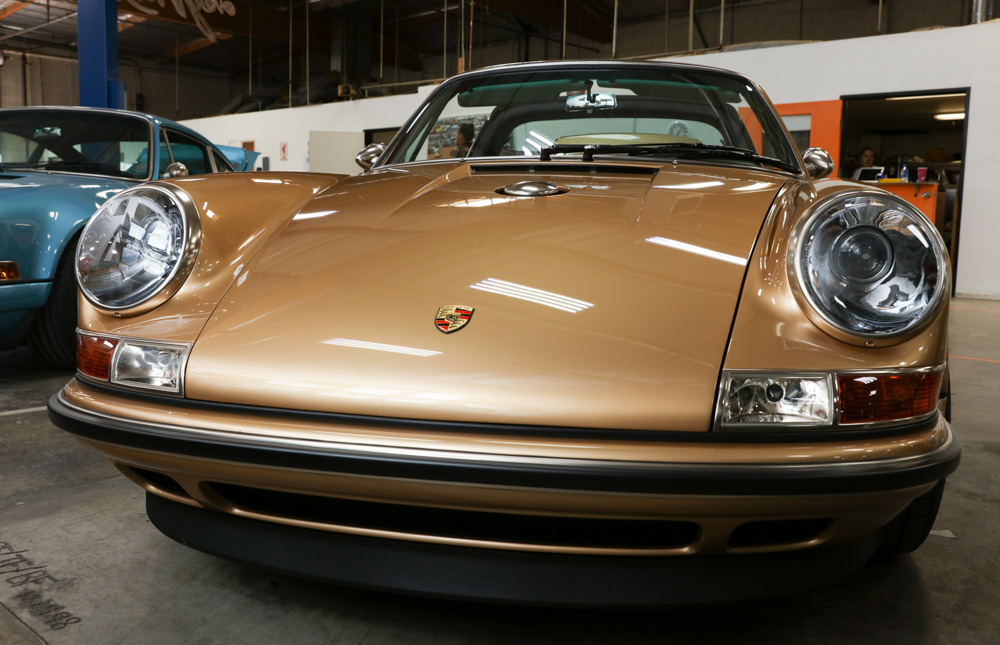 Application of actual design innovation is one of the biggest issues these days when it comes to novelty – the way watch lovers like to think about it. Years ago Mr. Borraccino might have been able to stroll into the offices of any number of Swiss watch brands to pitch his design idea and likely gotten at least a few bites. Borraccino would have had to adapt the design of the watch to the aesthetic DNA of a major brand, but could have likely sold it and had them do the rest in order to produce it. These days the dream of being a watch designer and going to an established brand to get your dream product made offers a vanishingly thin chance of success. If you want to do something new, you basically need to do it yourself.

With a rough idea for a watch design and a plausible movement supplier with an item that has never before been used in a watch, a galvanized Borraccino did what any fanboy would do – approach a favorite car maker whose personality he saw matching his ideas and suggested something a bit crazy to them. 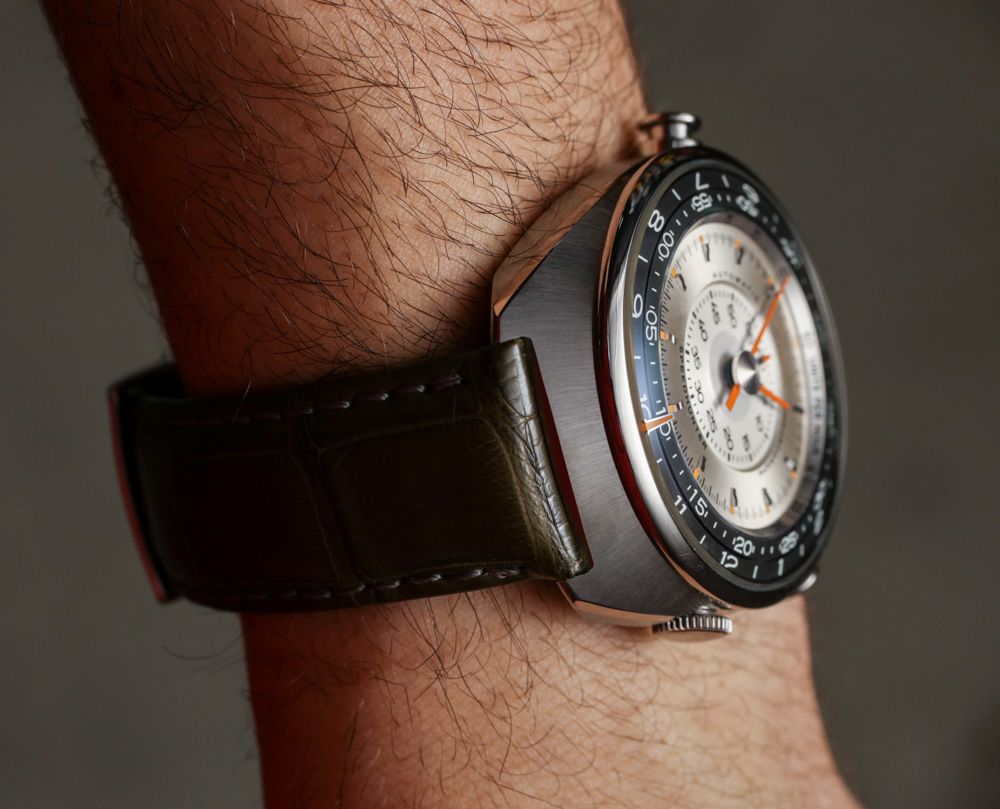 Flash forward and I’m here in California asking Rob Dickinson – founder of Singer Vehicle Design – what it feels like to have the brand’s first original design. See the funny thing about the Singer Reimagined Track 1 watch is that it is the first original product the company has come out with. Singer’s entire existence is based upon taking certain mostly 1990s-era Porsche 911 automobiles and lavishly customizing them for performance, quality, and to have a retro-sports car vibe. Adoring (and very wealthy) fans of the vehicle company, commission Rob and the Singer team to produce $500,000 and up “fantasy” Porsche 911 cars that look like throwback sports cars that never were. Rob’s passion is a fascinating expression in design because it is as if he is reference-engineering his sense of sports car nostalgia. Rather than seeking automotive examples of his youthful ideals, he merely finds clients who want to help him build them. 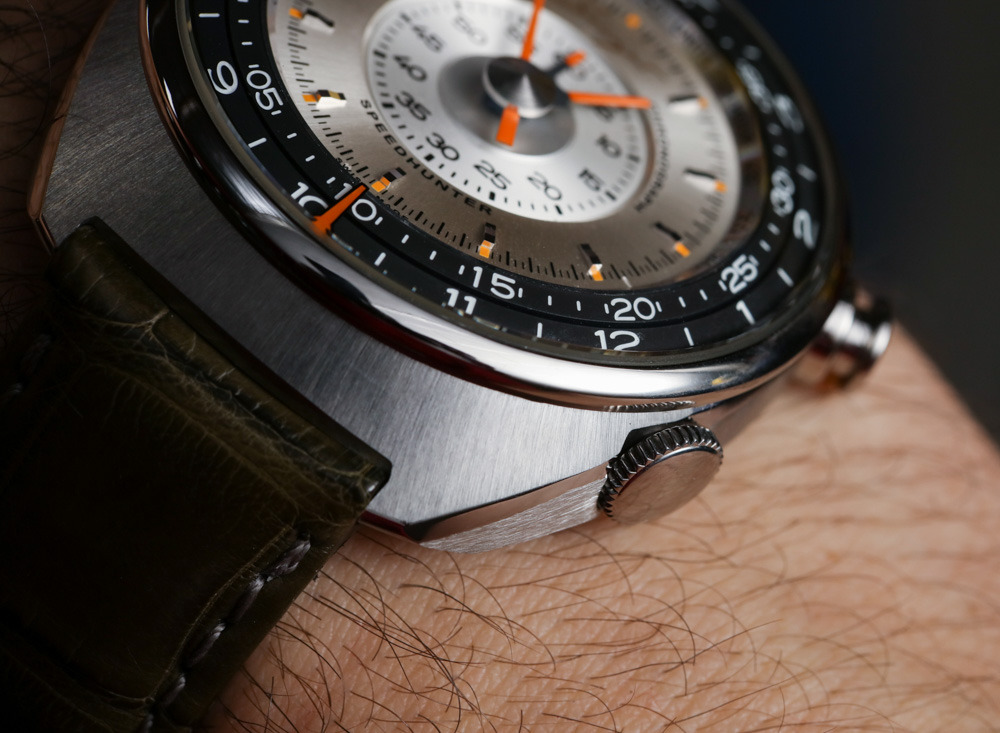 If you can see where the notion of painstakingly creating a fantasy 911 with Singer overlaps a love of fine timepieces, then you aren’t wrong. When Marco approached Rob with the interesting opportunity of making a watch together, that he could help design, that had the Singer name on it, well, how could he say no? Guys who do what Rob does, do so because they jump at unique opportunities like participating in the creation of a new luxury watch brand.

“Singer Reimagined” will technically be a separate entity from Singer Vehicle Design, and the goal is for the Track 1 watch to be the first of more to come. Singer will act as the sales entity to sell the watches, and the team in Geneva will fulfill and service orders. The relationship works for two levels. One because Singer will likely regularly have a good list of clientele able to pay a bit more for “the cool watch,” and because without a brand and story, Marco and Jean-Marc’s concept for a new luxury timepiece was not complete. 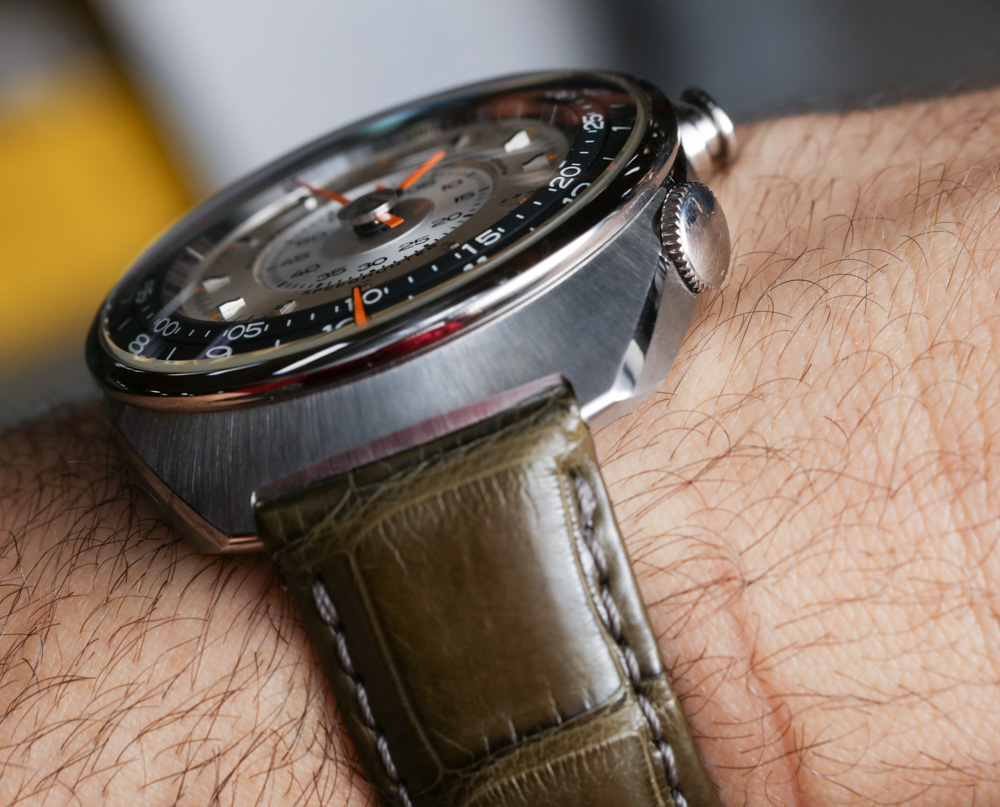 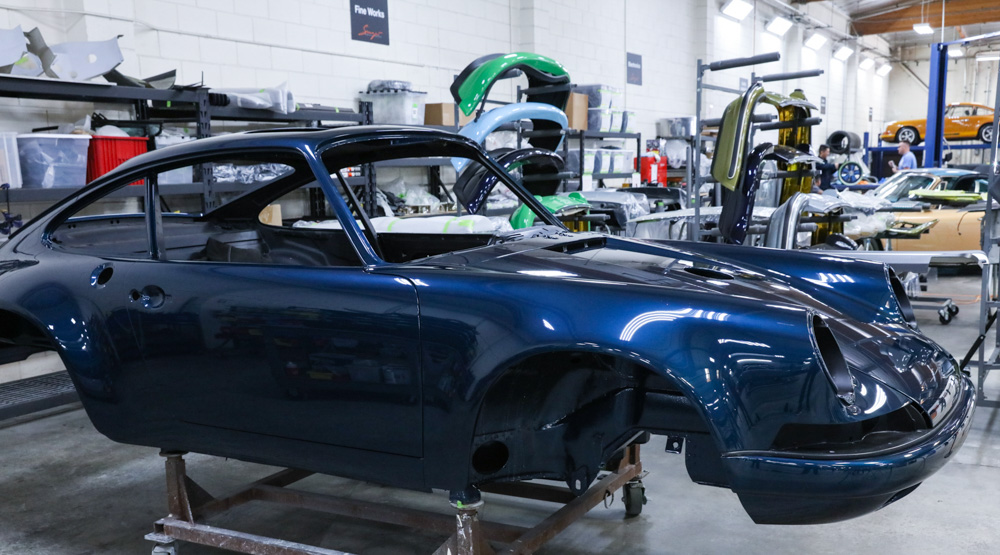 What we have here is very straight-forward and honest collaboration that is not only a smart decision in this tricky time for high-end watch makers, but also demonstrates the way that Switzerland can make best use of their design and manufacturing skills, in collaboration with others that bring other benefits to the table. Here that is Singer, who brings not only a large amount of esteem and legitimacy, but an opening to the world of well-funded and highly motivated custom car buyers. 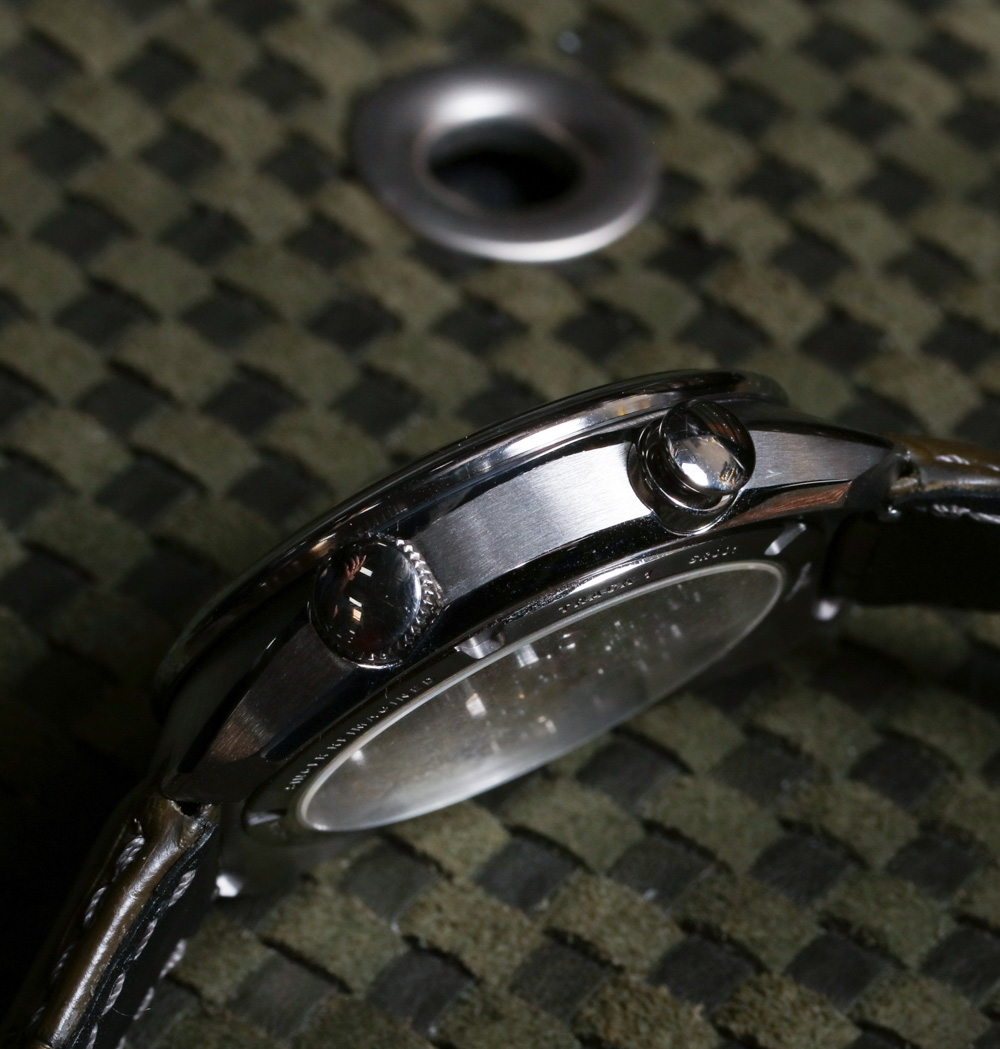 So let’s talk about the watch now that you more or less know the story of where the Track 1 design came from. At a glance on the wrist the watch is bold and impressive, though not gaudy or pretentious. The tonneau-style case shape easily pegs the design as a retro-sport watch as we’ve seen this look on diving, flying, and racing watches from the 1960s and 1970s. The Launch Edition of the Track 1 comes with orange and green accents to complete the vintage look. Though the team does promise additional variety in future models. 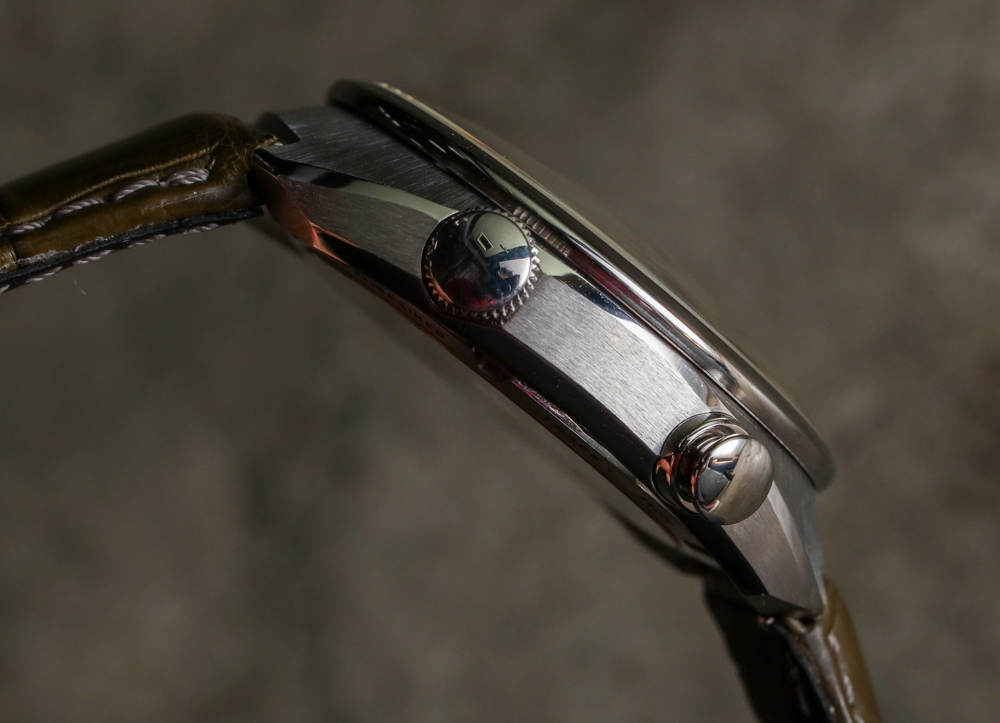 The entire point of the Track 1 (original name was actually the Speed Hunter – but that name will be reserved for something else) watch design is to make an analog chronograph more legible. Most mechanical chronograph watches rely on sub-dials to indicate most of the chronograph information. These sub-dials are underneath other hands, and for many watch lovers the process of reading the majority of analog chronograph watches isn’t simple or quick. Thus, what Marco wanted to do is dedicate the entire center of a watch dial to the chronograph, while placing the time elsewhere. 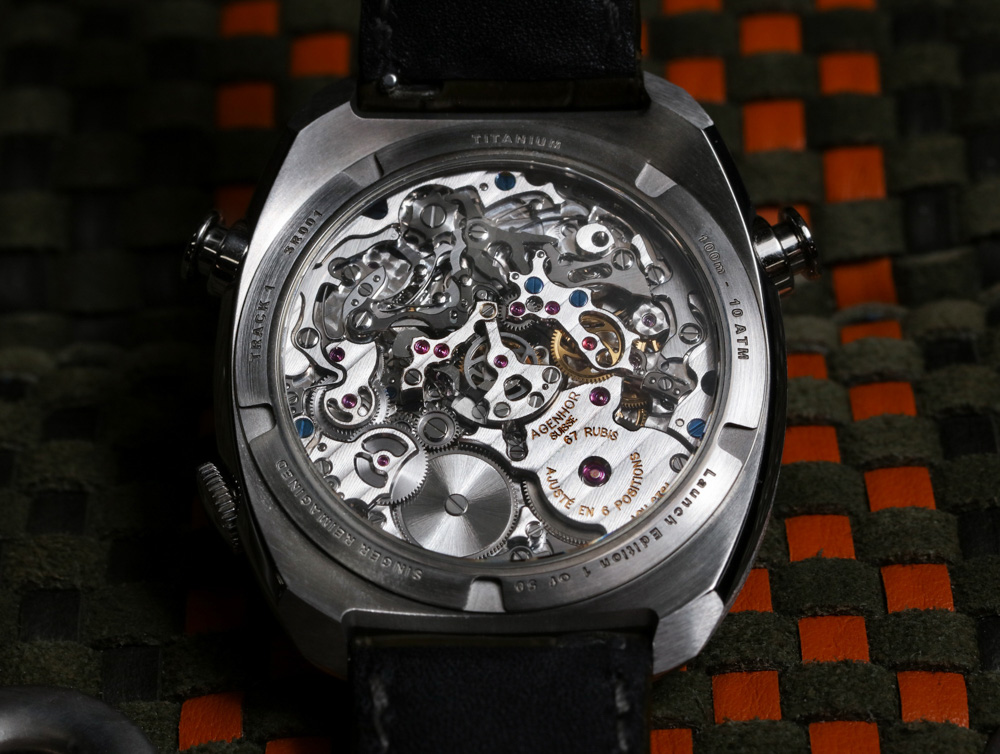 The time is indicated via two moving rings placed on the periphery of the dial. Time is read in a manner that is virtually identical to that of the MB&F HM7 Aquapod (hands-on here). If you look at the spot around 6 o’clock, there is a red line on the bezel, where you read the time. You simply see what markers on the ring intersect with the red line to read the current time. It takes a bit of getting used to, and for a lot of people seeing the watch for the first time, how the dial even works is not obvious.

Placing the time on the outside of the watch face allows for the center of the dial to be dedicated to something else – which here is a chronograph. More so, the Singer Reimagined Track 1 is the first watch in the world to do all this – so in addition to a cool design, there is the value of having a timepiece which did something “first.” The chronograph dial itself is simple and makes a lot of sense. Three hands – all centrally-mounted – are used to indicate the chronograph seconds, minutes, and hours. True enough, the chronograph is much more simple to read than most traditional ones – even if people looking at the Track 1 face for the first time believe that this is a display for the time. 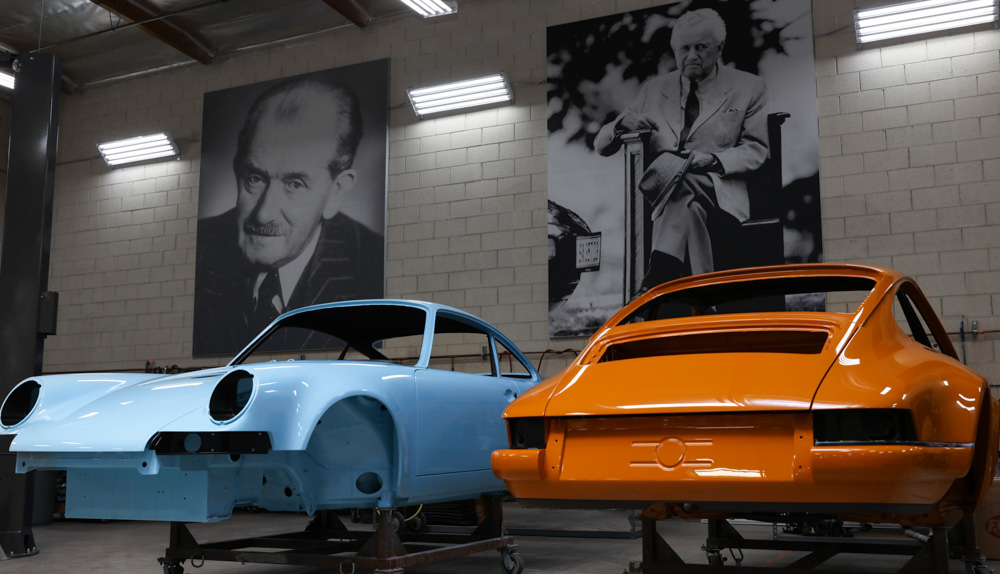 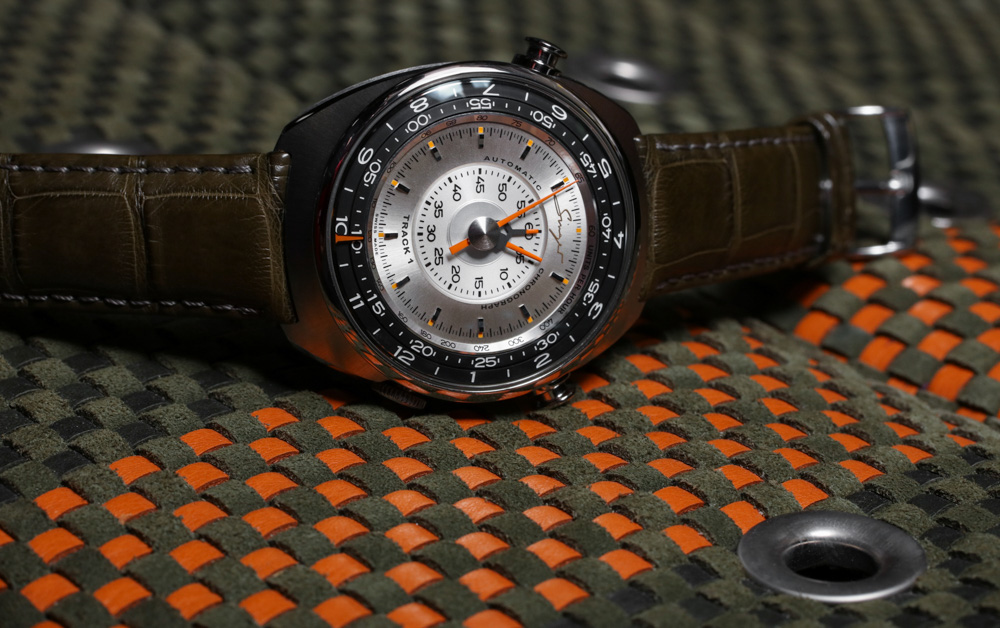 Marco and Rob worked closely on the design of the case and dial in order to make it look as retro, and period-appropriate as possible. Such as Singer modified Porsche cars are not about bling, neither is the watch. While the design has decorative elements for sure, there is a major focus on utility value, which I think will resonate well with both watch and automotive enthusiasts.