On the wrist, the Horological Machine No. 7 “Aquapod” felt as though it was easily the weirdest MB&F timepiece I’d ever put on. Those who know the brand will be quick to point out the severity of that statement. Pretty much all MB&F Horological Machine (HM) timepieces are weird by design, yet mostly very comfortable on the wrist. That means in order to be “the most” visually unconventional, the HM7 needed to go that extra distance – to beat out other close contenders such as the HM1, HM2, HM3, HM4, HM5, HM6, HMX, and HM8. That is actually all of the other Horological Machine watches, and I have realized that each in its own way has a very unique wearing experience. With that said, the HM7’s uniqueness, to me, was the most assertive. Perhaps that is because it is the first round-shaped Horological Machine watch MB&F has ever produced. 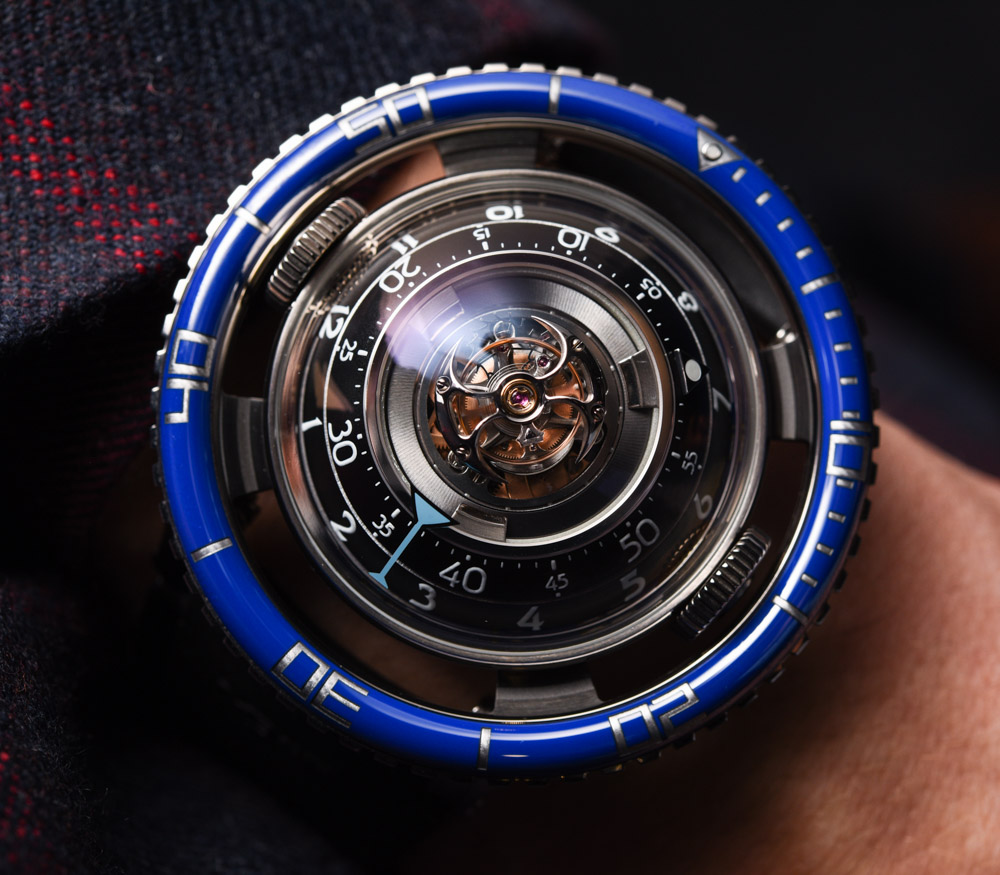 Like most HM timepieces, the MB&F HM7 Aquapod is expensive, technically interesting, built with very high quality standards, and utterly polarizing. Even among the aBlogtoWatch team – who tend to be rather open-minded – there was mixed sentiment toward the MB&F HM7 Aquapod. That’s fine and to be expected, as very few people out there have the same level of desire for each and every MB&F watch that Max Busser and team produce. Though, I’ve found that the watches produced by the brand which are the most conservative (relatively speaking) are actually the least interesting for me. Thus, I consider myself among those people who need a high degree of “craziness” to feed my passion for what MB&F produces. 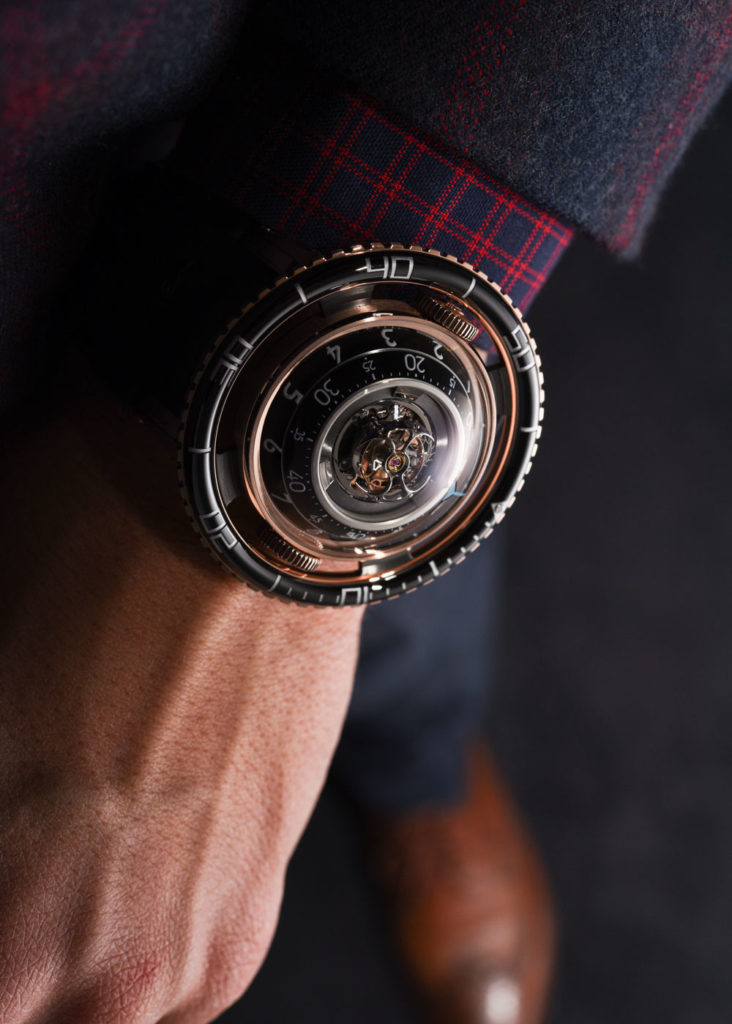 Just prior to SIHH 2017, MB&F released the Horological Machine No. 7 Aquapod watch and I wrote about it at length here. I don’t intend on reiterating each technical detail and fact, so if the watch is new to you, I suggest you click on the above link to our introductory article on the MB&F HM7 Aquapod to get acquainted with this limited edition watch collection. The debut versions (meaning that limited edition versions with material or cosmetic changes will come in the future) of the MB&F HM7 Aquapod are relatively numerous by MB&F standards and will come as 33 pieces in titanium and 66 pieces in 18k red gold. 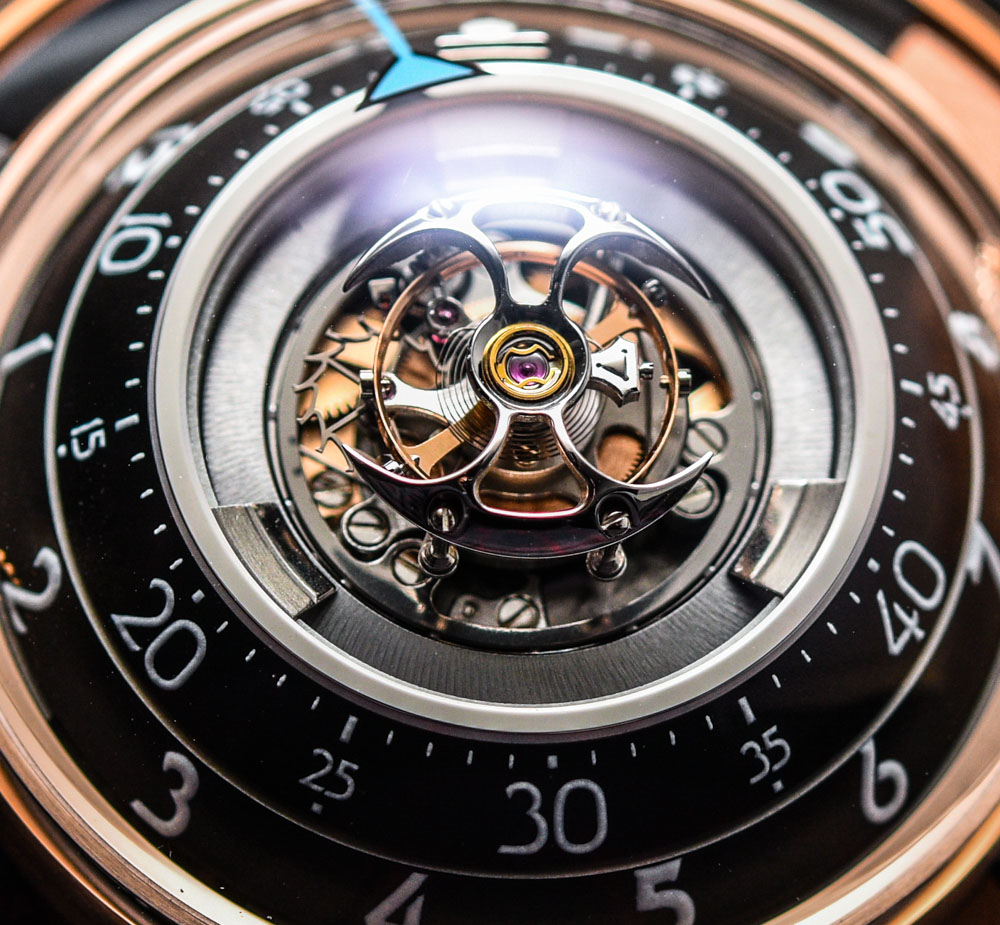 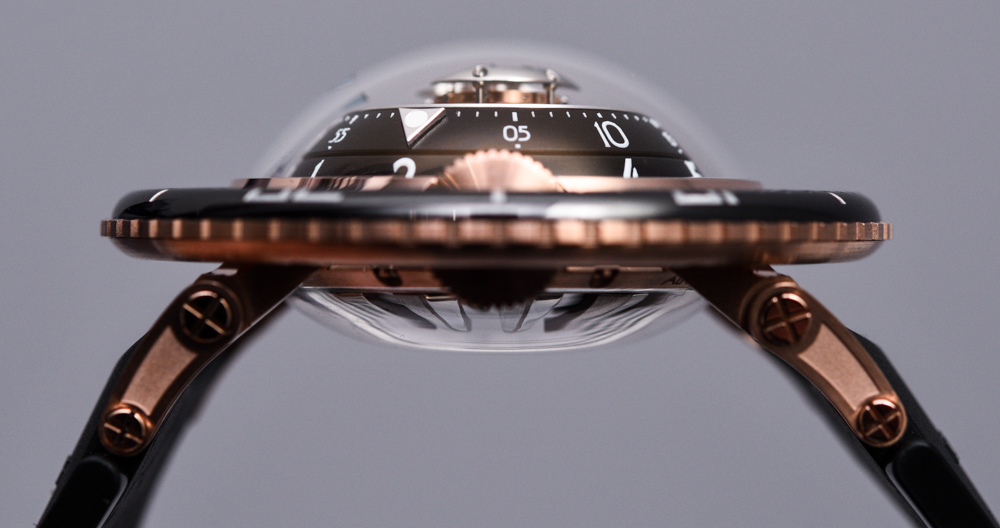 When writing about the MB&F HM7 Aquapod earlier in 2017, I found it interesting (and I mentioned it then) that more versions of the MB&F HM7 Aquapod watch would be produced in gold versus the more “affordable” titanium. This is, after all, about as close as MB&F has come to a sport watch (I suppose you might argue the same about the HM5) so you’d expect wearers to value the lightness of something like titanium. Then I needed to remind myself that, no, this is indeed a $100,000 luxury product – even with the titanium case. Though still, this awesome sea creature look-alike is so dangerously close to a diving watch… 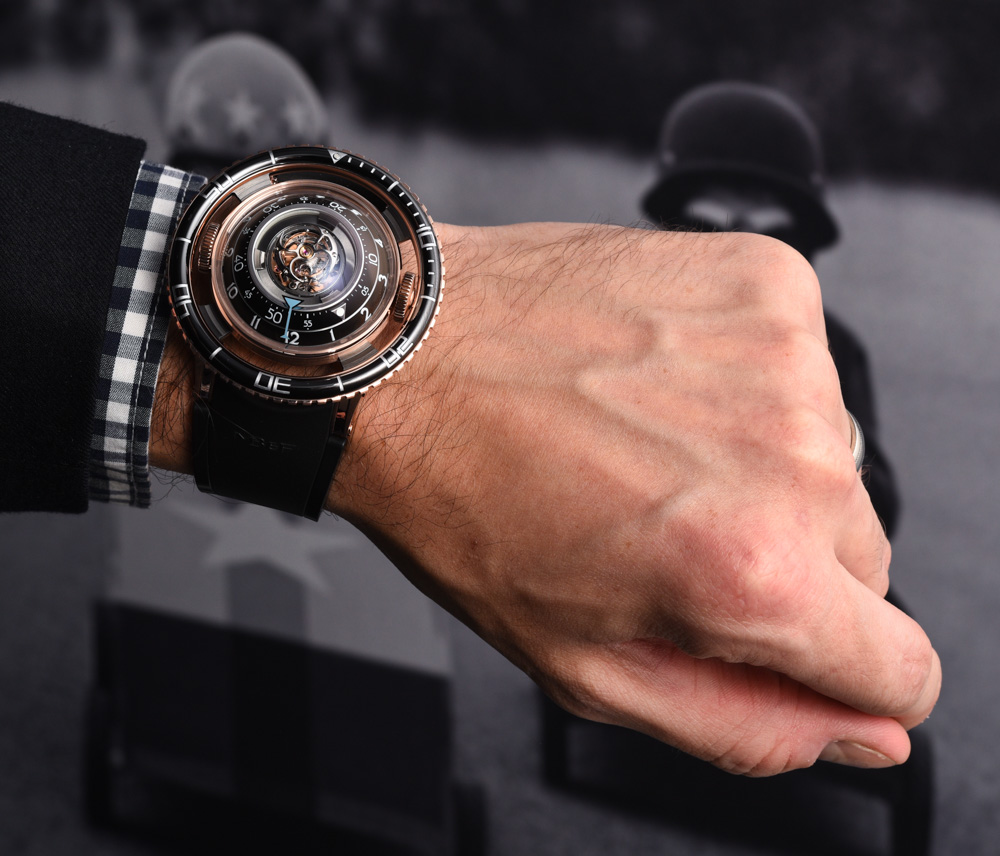 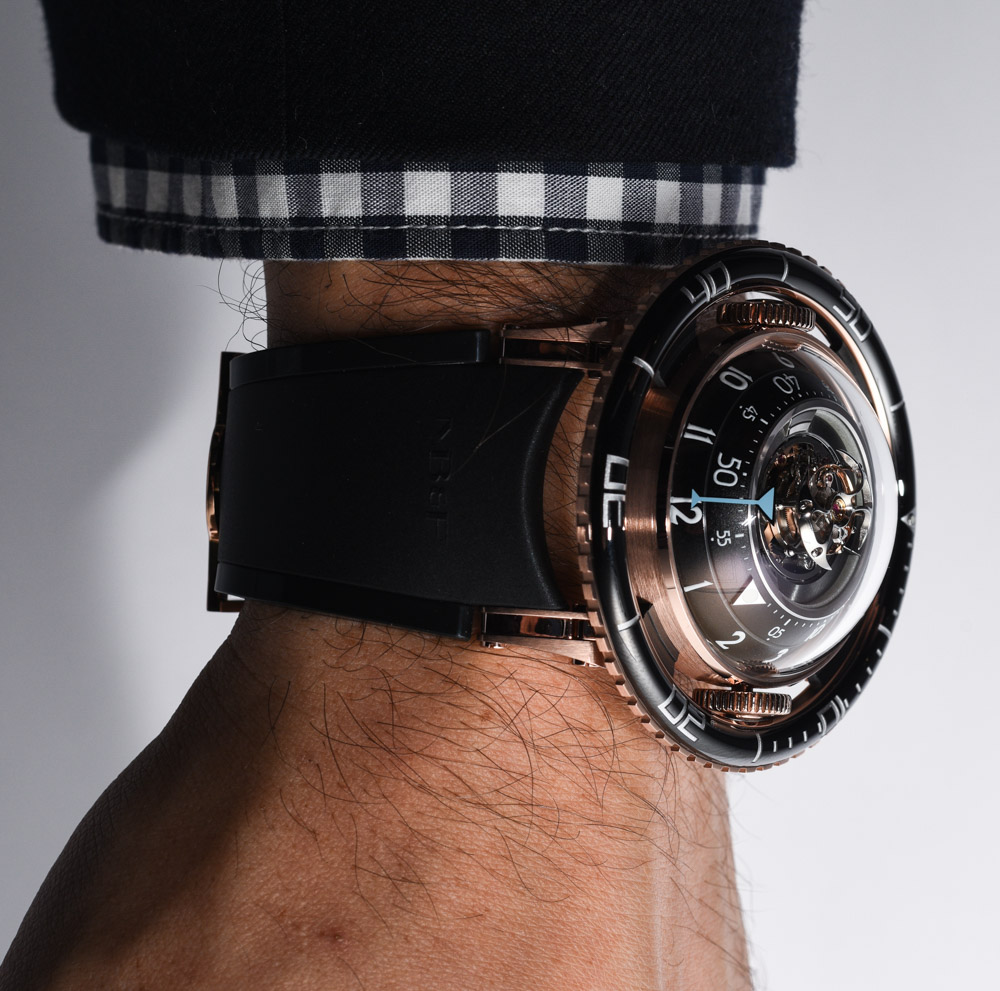 Unfortunately, my dream (and perhaps that of others) for an authentic MB&F diving watch will need to wait as the MB&F HM7 “jellyfish” has a case with only 50 meters of water-resistance. That is more than enough to take a light dip with it, but no vigorous swimming while wearing this watch is recommended. I asked the brand about what prevented the MB&F HM7 Aquapod from having more water-resistance. They indeed performed a series of pressure tests on the case. Apparently, the weak spots were the dual crowns on each side of the case, which are used to wind or set the time (respectively). It is possible that with some more hardcore gaskets or a screw-down system the MB&F HM7 Aquapod could increase its water resistant to 100 meters or so in future versions – but I have no idea if that will help MB&F sell any more of them. I suspect that even if I were among those people with the disposable income sufficient to purchase this watch, there would be a great number of other watches I would more immediately take into the depths than my precious MB&F. 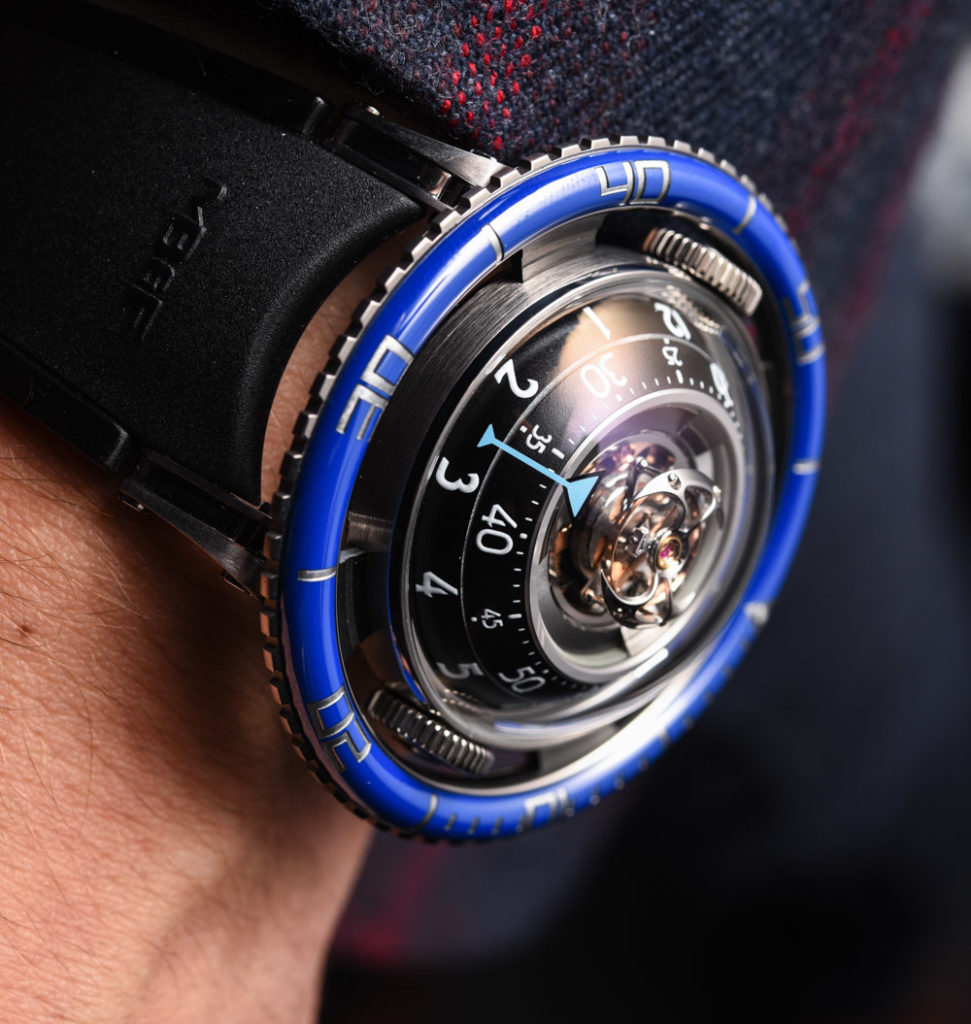 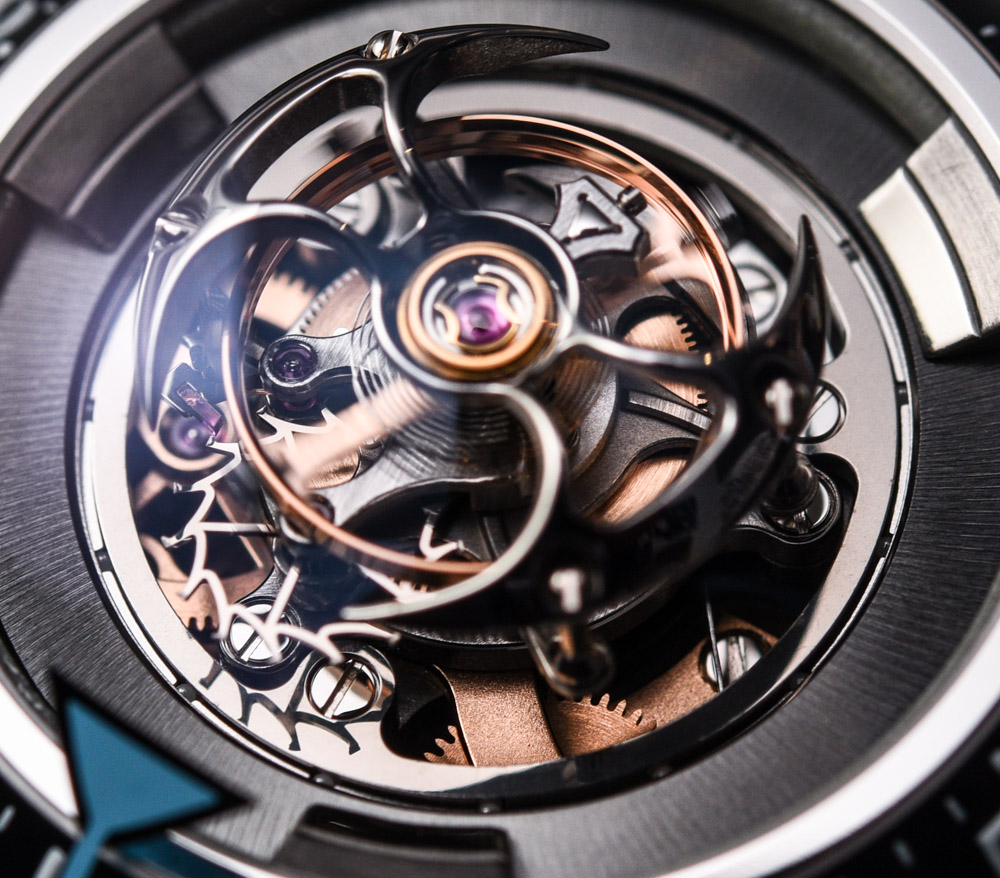 With that said, I think it is precisely because I love dive watches (and MB&F) that the MB&F HM7 Aquapod appeals to me as much as it does. I’m typically a believer in Max Busser and Eric Giroud’s (the actual designer) design sensibilities, so what the MB&F HM7 Aquapod does is combine at least two things I have a passion for. It is also visually wild, consisting of an inner sphere-style case with a flying tourbillon immediately framed by multiple angled rings that indicate the time, and a rotating diver’s style metal and ceramic timing bezel that feels like an MB&F nod to the Rolex Submariner. 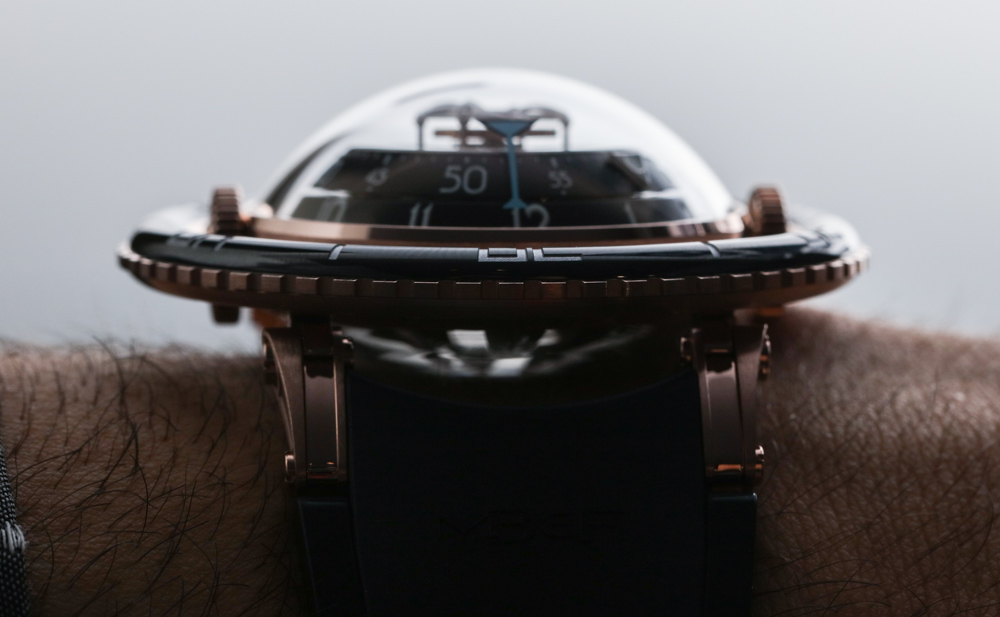 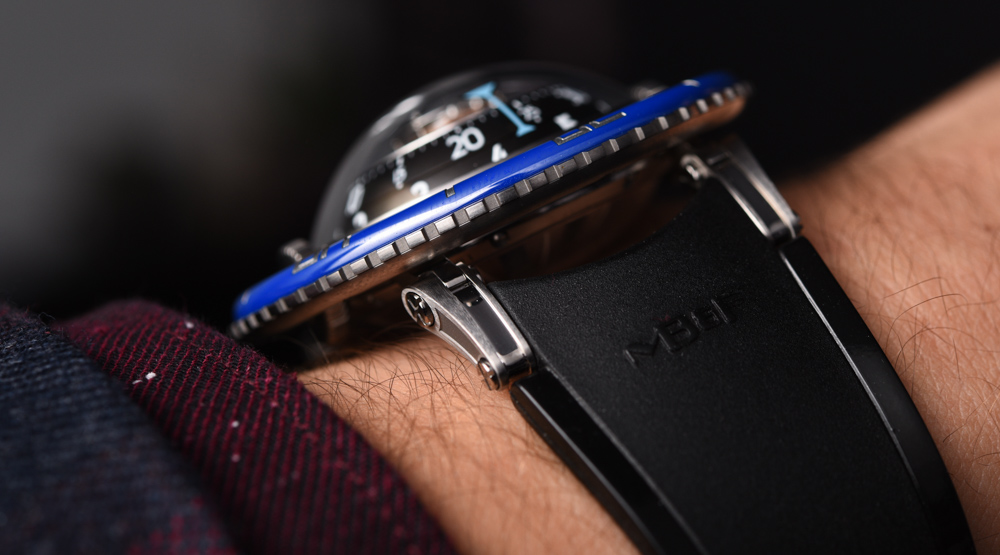 From the side, the MB&F HM7 Aquapod looks a lot like a 1950s- or 1960s-era idea of a UFO, which goes directly to MB&F’s enduring love of science fiction themes married to horological elegance. Even though the case is quite large at 53.8mm wide and 21.3mm thick, the bulk of the mass actually sits up above your wrist, making it very comfortable. Moreover, the high-end rubber strap is very comfortable (and neat-looking) and allows for a snug fit on the wrist. When paying the big bucks for something like an MB&F, you know for sure that you are investing in both design and ergonomics – seriously.

Even the action of rotating the bezel feels smooth, with assured clicks at each stop. This element of the watch feels no less well-engineered than the rest, and I can easily say that now that MB&F has designed a rotating bezel, they did a pretty nice job. Functionally, the watch is rather straightforward, offering the hours and minutes via the rotating rings, and the tourbillon cage more or less doubles as the seconds indicator. An electric blue line facing the wearer is where you read the current time. It’s actually quite easy to read once you get the hang of it. 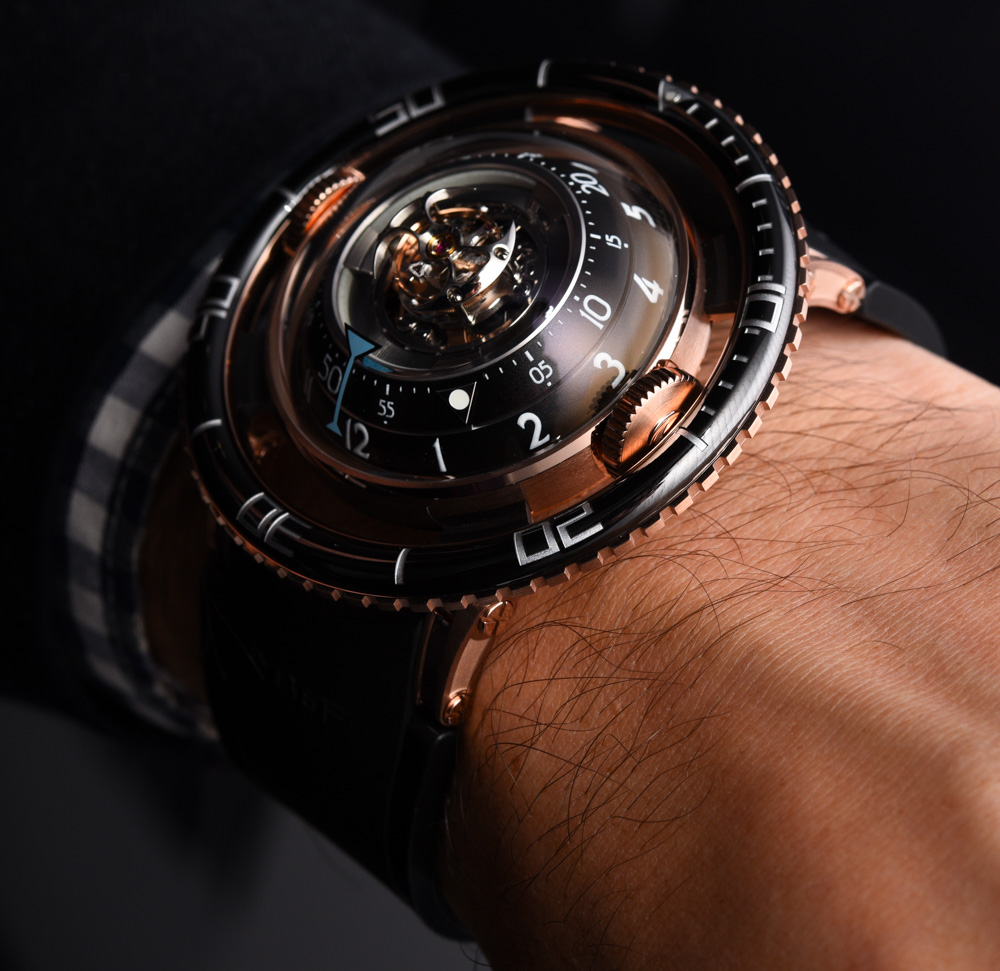 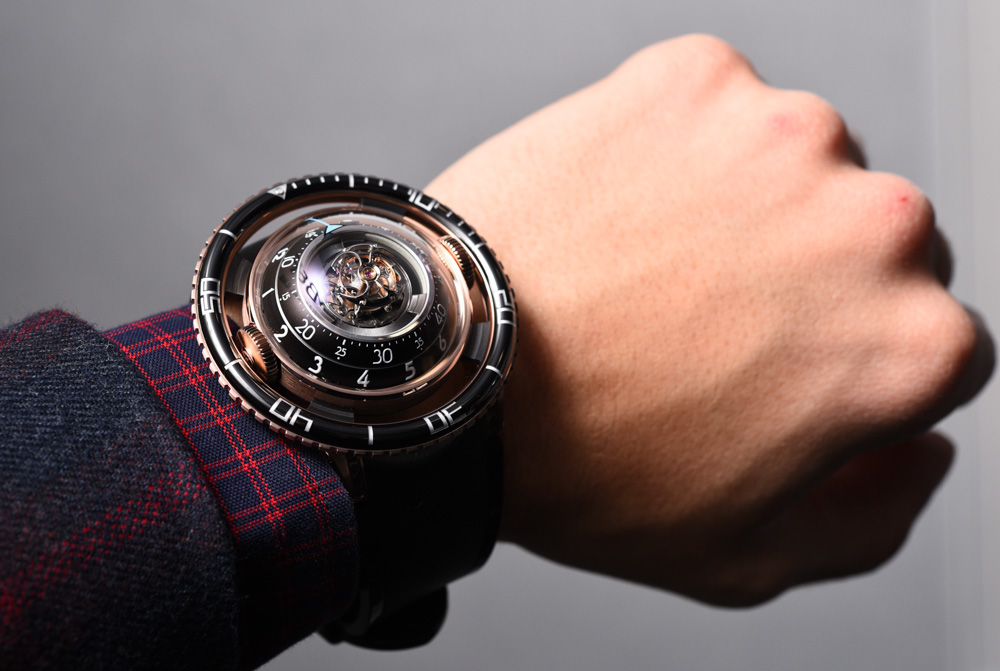 The closer you look at the rotating bezel and the rotating rings that tell the time, the more you realize all the subtle nods to traditional diving watches – like the Rolex Submariner, but not limited to it. The font used is exclusive to MB&F, but you can tell the numeral layout and design is thoroughly inspired by someone having spent years appreciating the look and feel of diving watches. Even the 60-minute indicator on the minute ring is an applied triangle with a lume pip, a style you’ll find on the bezels of many serious diving timepieces.