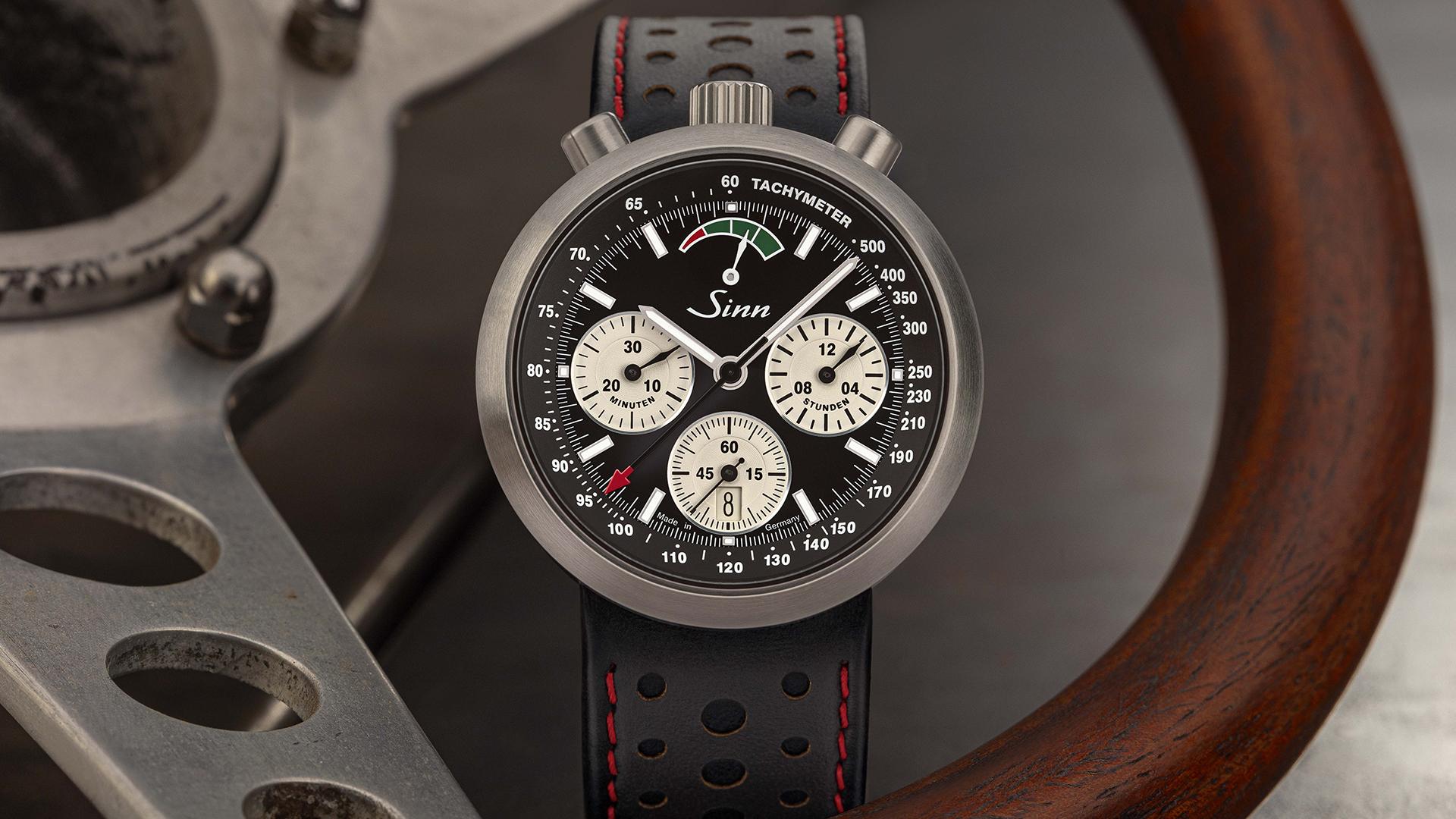 In terms of design, Sinn is generally better known for its stark Germanic utilitarianism than for loud outlandish statement pieces. Historically, however, this has not always been the case, and for its latest release Sinn has reached back in its catalog to the early 1970s to create a funky and charismatic revival of its original bullhead racing chronograph. The limited-edition Sinn R500 is a definite departure from the brand’s usual designs but balances its loud and brash concept with clean and straightforward execution. 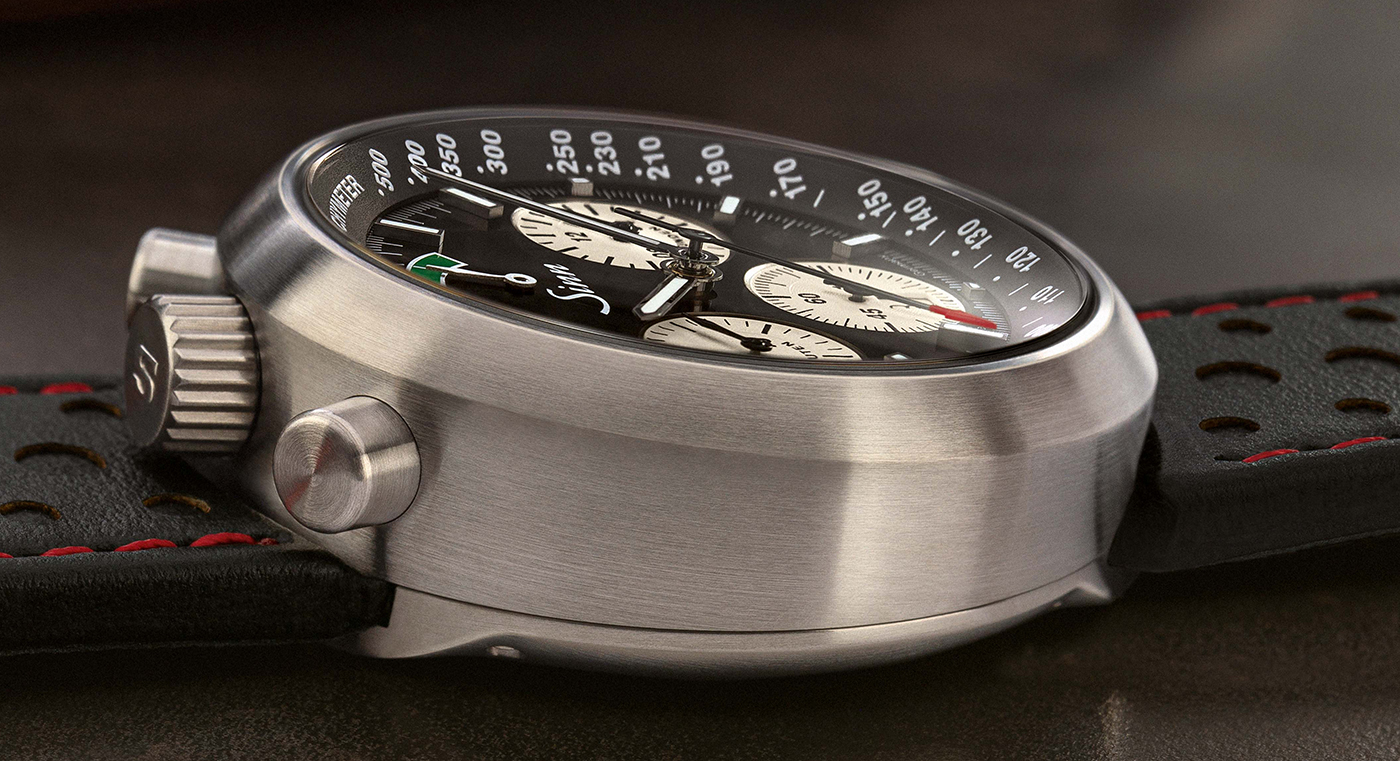 While bullhead chronographs are a rarity nowadays, the design concept is far from a new idea, with brands including Omega, Seiko, Citizen, Breitling, and Sinn itself creating distinctive and iconic riffs on the theme in the 1970s. What nearly all of these incarnations had in common is bulk. Most bullhead case designs are hefty, thick pieces designed for maximum visual impact on the wrist, and the Sinn R500 looks to interpret that trend in interesting ways. The 42mm brushed titanium case of the Sinn R500 is by no means small, with an overall depth of 16mm at its thickest point, but initial images indicate this may be surprisingly compact on the wrist. With a round lugless case shape, the lug to lug distance is the same as the diameter at 42mm, likely minimizing lug overhang on most wearers’ wrists. The vertical case sides, however, tend in images to emphasize the height of an already tall case. Thanks to the simple two-piece case design, the R500 offers a solid 200 meters of water resistance, but the most striking detail of this case comes from viewing the watch from the side. Like many bullhead designs, the R500 slopes from its thickest point at 12 o’clock down to its thinnest point at 6 o’clock, angling the face towards the wearer for at-a-glance reading. 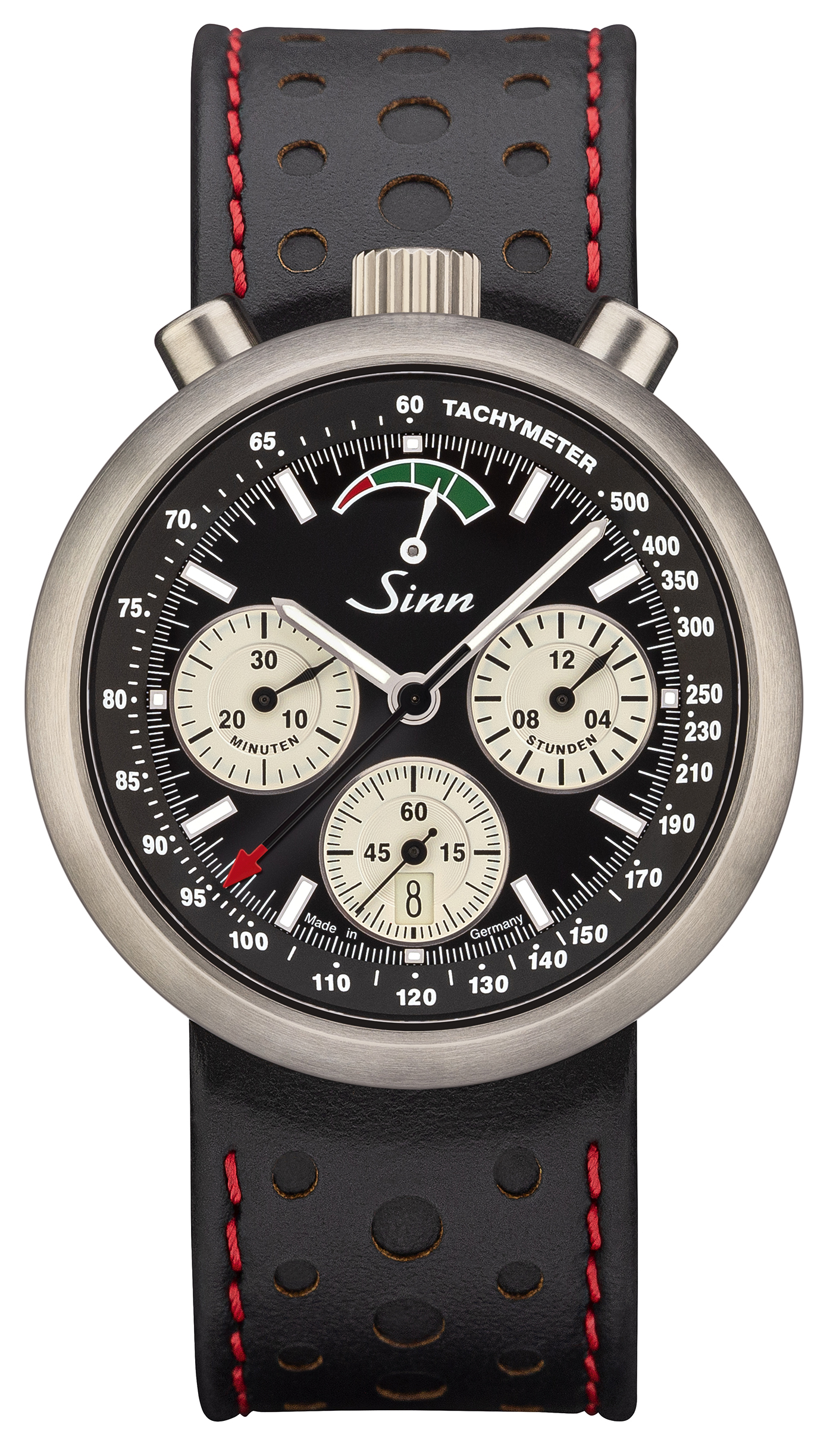 Although the case of the Sinn R500 is typically bombastic and striking for a bullhead chronograph, the dial design is a remarkably restrained interpretation of classic sports chronograph motifs. Surrounded by a tall sloping tachymeter rehaut, the matte black main dial surface is punctuated by three reverse panda style white chronograph subdials. Each subdial is accented with a polished outer ring and given further depth with a partial azurage finish. The pencil handset and applied baton indices are classically simple, allowing the bright red arrow tipped central chronograph seconds hand to become a natural focal point. The other splash of color on the dial comes at 12 o’clock, with a power reserve indicator in deep green and red. To maintain symmetry, the R500 moves its date display to 6 o’clock, integrating it cleanly into the running seconds subdial. 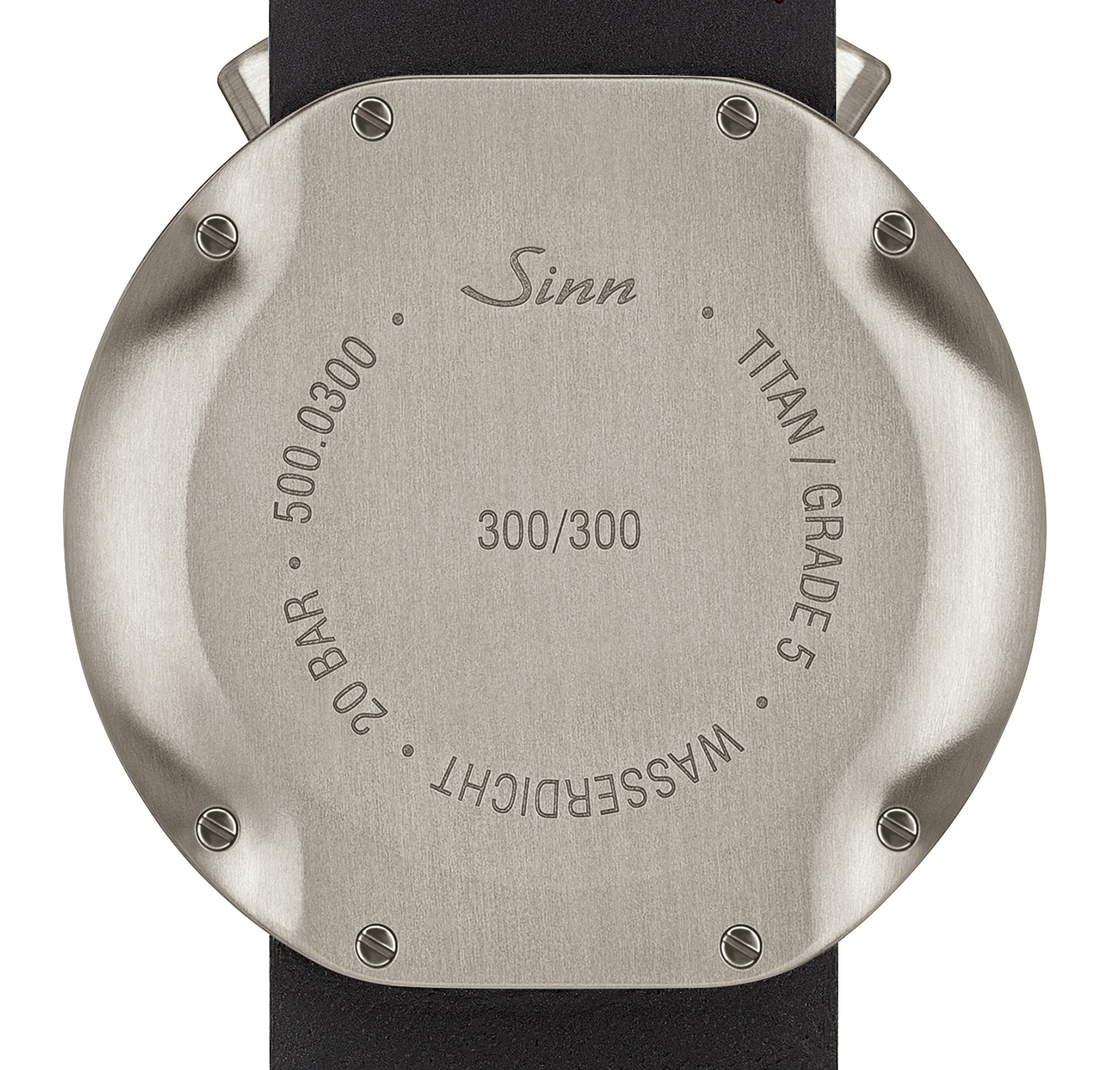 Sinn powers the R500 with a modified variant of the venerable Valjoux 7750 automatic chronograph movement. Beyond the inclusion of a power reserve complication, however, performance remains virtually unchanged from the baseline Valjoux 7750 with a 48-hour power reserve at a 28,800 bph beat rate. To complete the retro racing look, Sinn pairs the R500 with a black leather rally strap accented by vibrant red stitching. 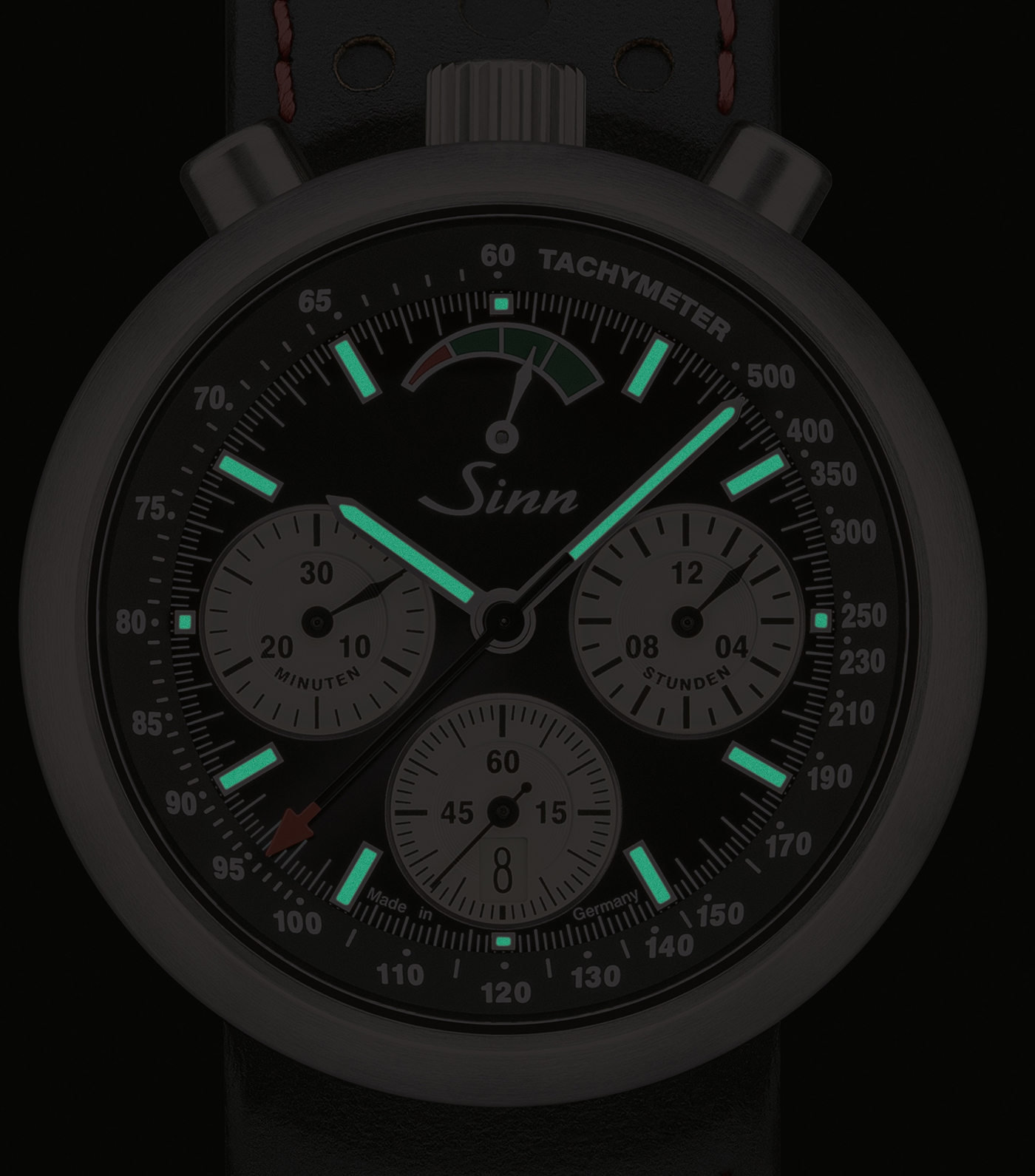