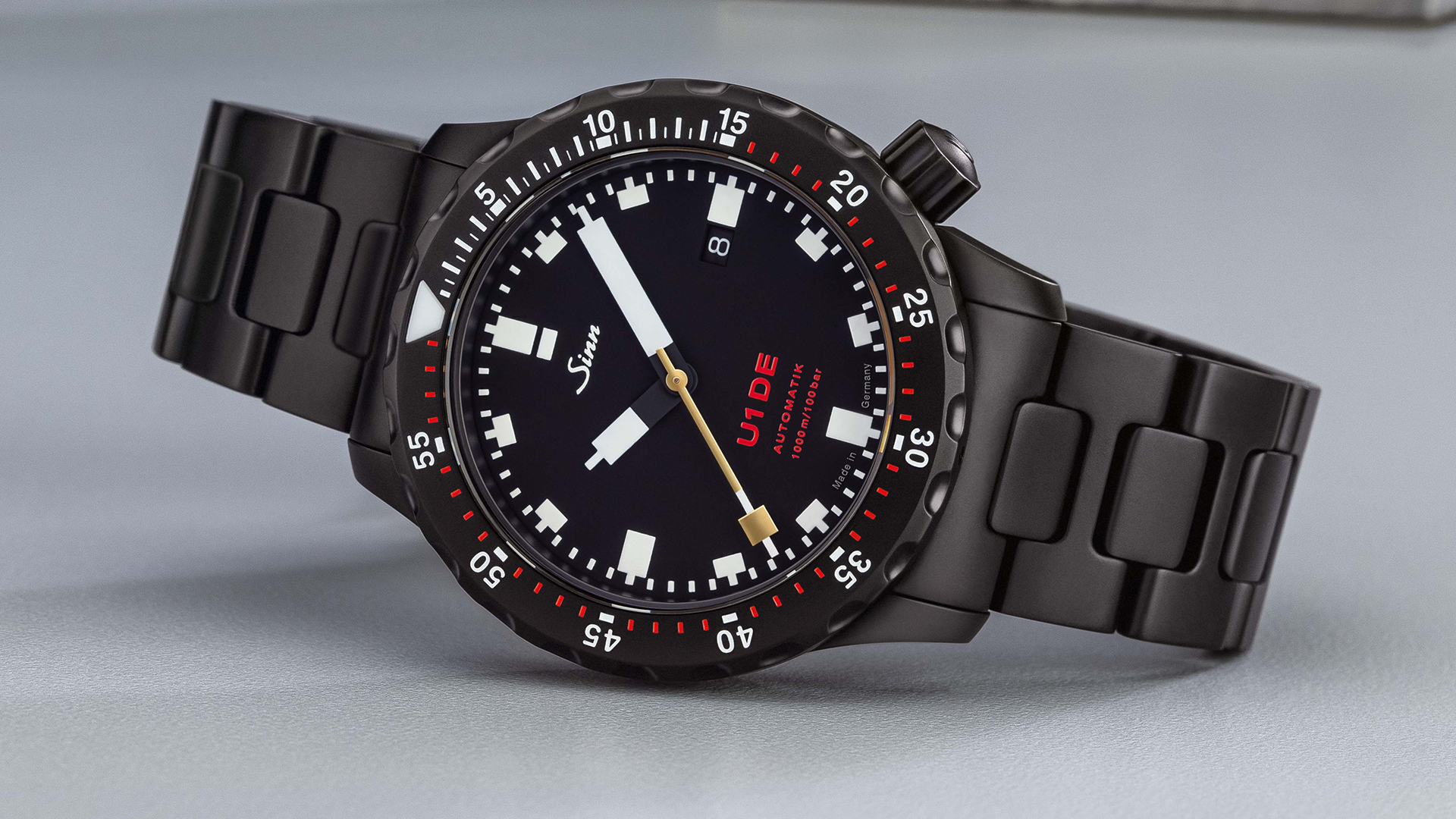 Undoubtedly one of the most sudden and impactful events of the late 20th century, the fall of the Berlin Wall and the reunification of Germany sounded the beginning of the end for the Soviet-aligned Eastern Bloc while ending decades of strife for the German people. With the 30th anniversary of the reunification between East Germany and West Germany approaching on October 3, 2020, German tool watch specialist Sinn is creating a special limited edition variant of its signature U1 diver to mark the occasion. The limited edition Sinn U1 DE is a surprisingly restrained celebration of German reunification, losing none of the brand’s legendary tool watch practicality while adding a touch of Teutonic flair.

The 44mm case of the Sinn U1 DE follows the classic no-nonsense U1 formula, with its wide scalloped dive bezel and distinctive 4 o’clock screwdown crown. While the case form itself, rendered in German submarine steel and hardened with Sinn’s unique Tegimented process before receiving a black hard coating, may be nothing new, the story behind this case is in itself a celebration of the reunified Germany. Since 1998 Sinn has partnered with case manufacturer SUG for its cases, and while Sinn is based in Frankfurt in the west, SUG is headquartered inside former East German territory in the watchmaking hub of Glashütte. This combined eastern and western expertise is celebrated in the U1 DE’s special engraved caseback, which highlights both company logos along with an inscription commemorating the 30 year anniversary of German reunification. Like its regular production stablemates, the U1 DE is designed for function first, and boasts a massive 1000 meter water resistance rating. 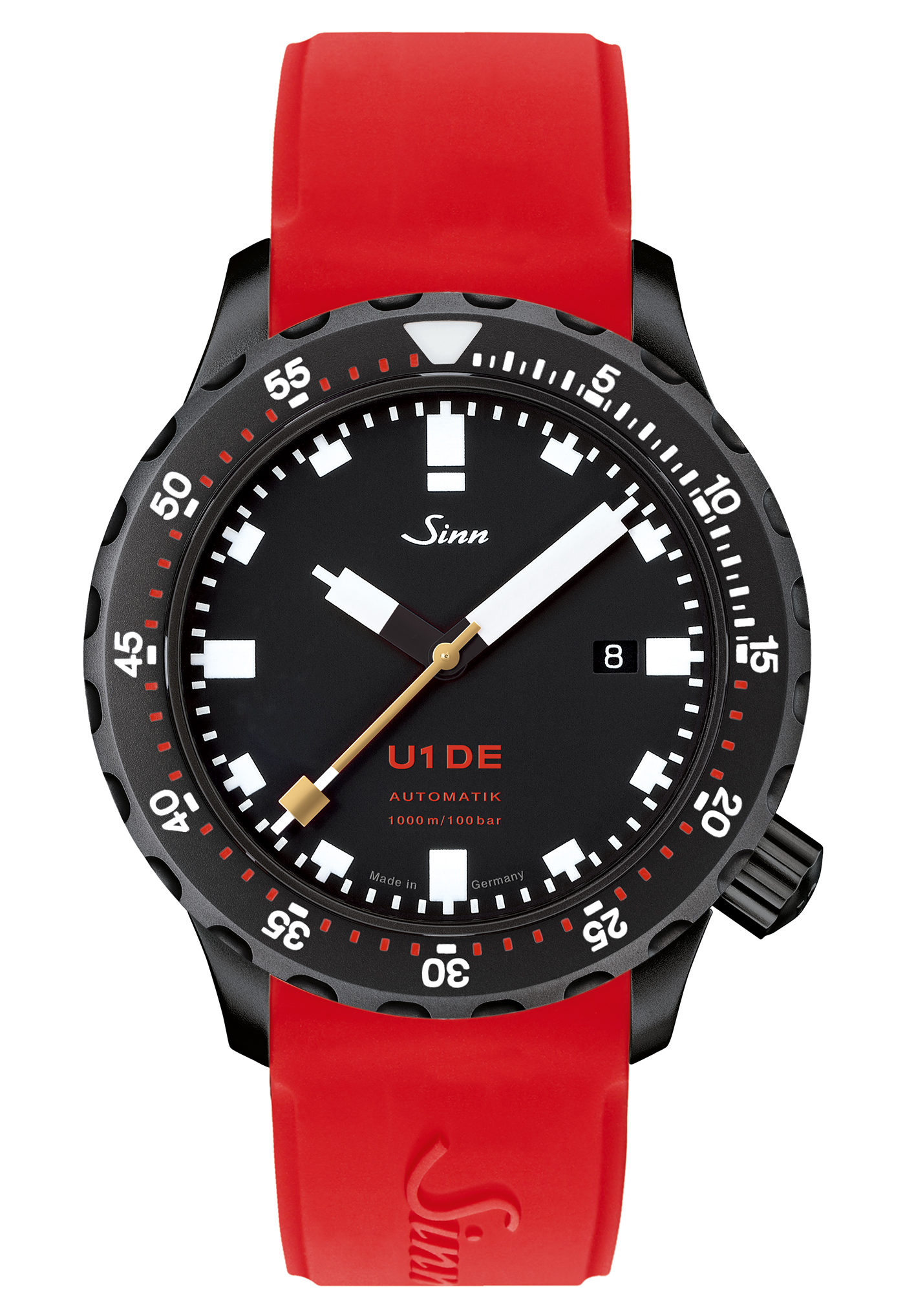 Sinn’s approach to celebrating the German reunification through the dial of the U1 DE is both unobtrusively low-key and pleasingly Germanic in its execution. Like the case, this dial is nearly identical to the classic U1 look, with its instantly recognizable squared off syringe hands and matching printed rectangular indices. The eye-catching gold-plated seconds hand, however, immediately stands out against this clean utilitarian backdrop. Beyond being a dynamic flash of color, however, this is another tribute to the united Germany. Together with the matte black main dial and bright red dial text at 6 o’clock, this seconds hand forms the three colors of the German flag. It’s not an immediately obvious visual touch, but even without making the visual connection the gold central seconds adds an attractive flash to the combination. 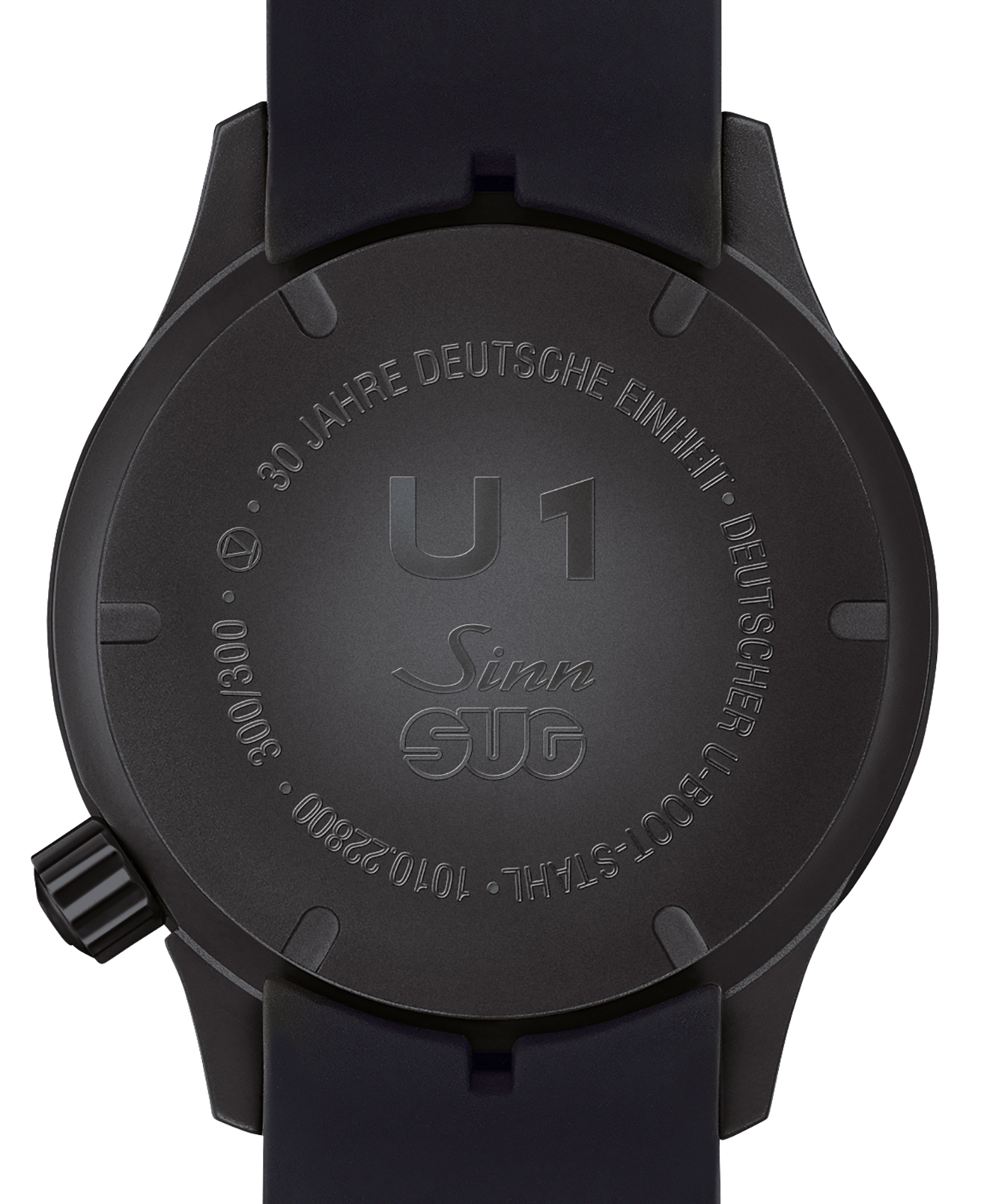 Sinn powers the U1 DE with the Sellita SW200-1 automatic movement. This ubiquitous workhorse caliber has made its way into a wide variety of timepieces over the years but remains a solidly reliable performer. Performance specs include a 38 hour power reserve at a 28,800 bph beat rate. 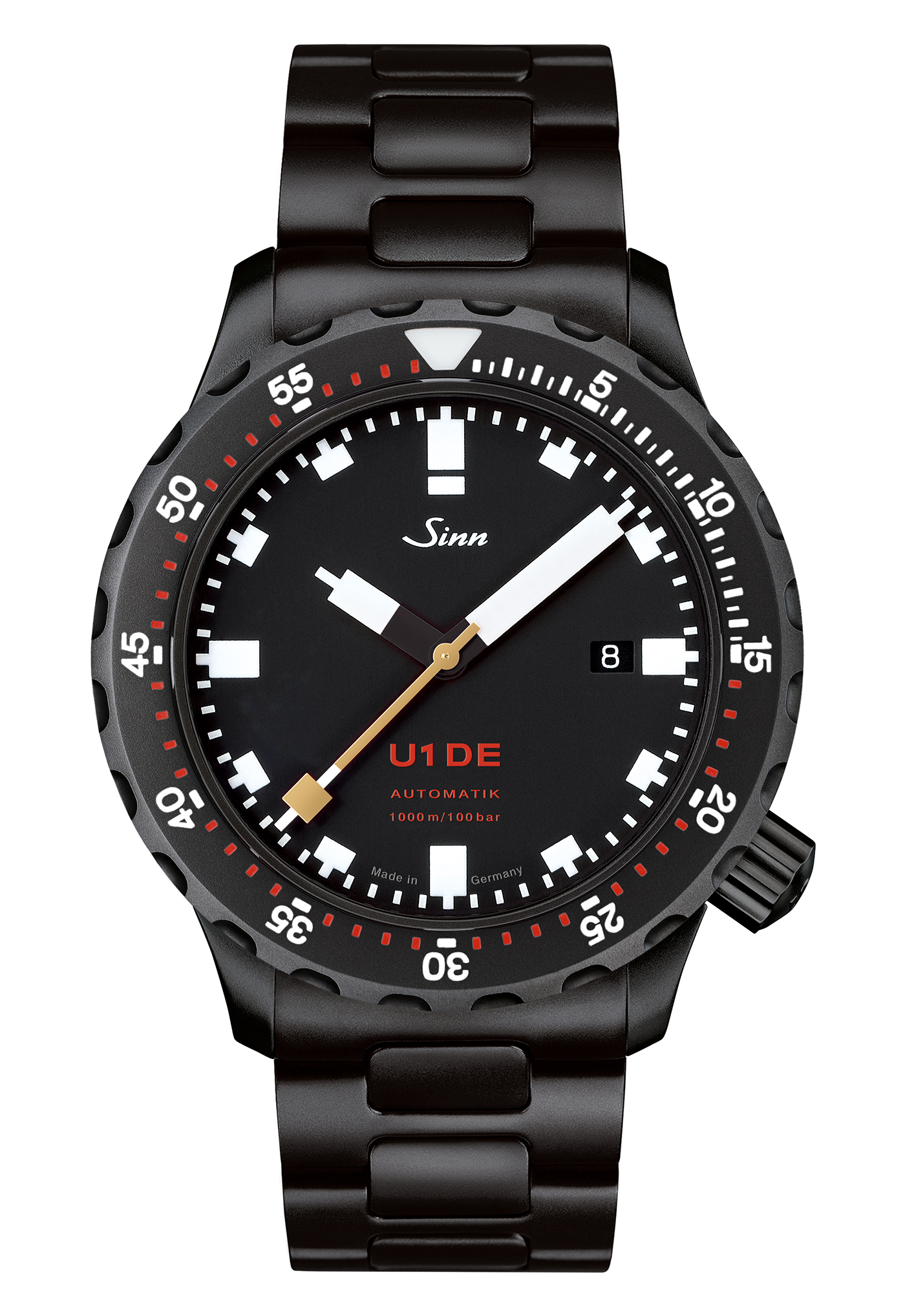 In terms of strap options, Sinn offers the U1 DE with three selections from its standard lineup that help to complete the patriotic black, red, and gold color scheme. The first among these is Sinn’s rounded H-link bracelet in stainless steel with the brand’s black hard coating. This is the most versatile and luxe of the three, helping to create a more unified feel for the entire design. The other two options are embossed silicone straps in either black or a blazing red. Durable, comfortable, and an excellent option in warmer climates, these straps help to inject more of a sporty, casual energy into the U1 DE, particularly in red. 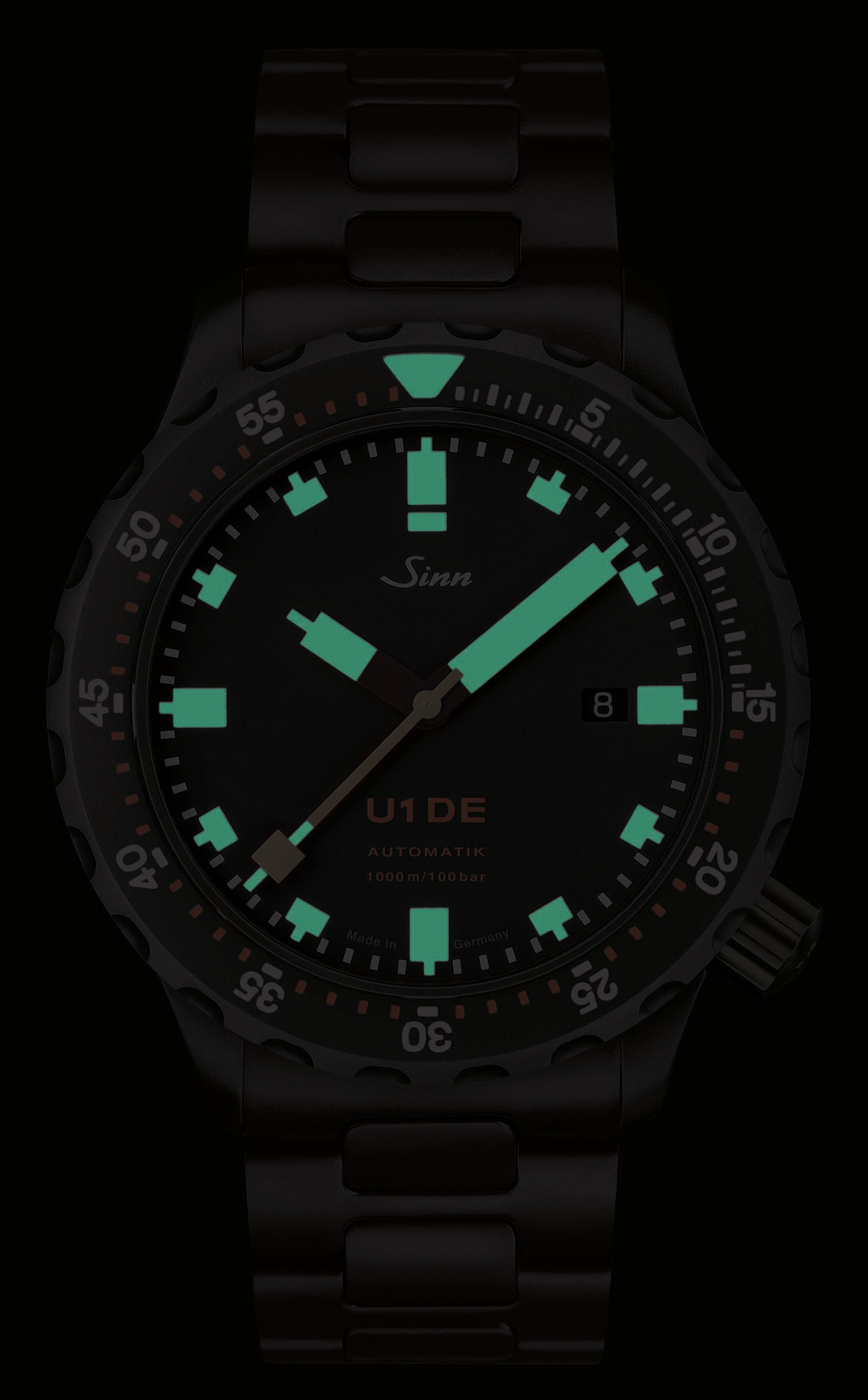 While a surprisingly restrained visual tribute to the reunification of Germany, the Sinn U1 DE stands as a handsome and subtle addition to the brand’s tool watch lineup. Only 300 examples of the limited edition Sinn U1 DE will be made, available now through authorized dealers at a starting MSRP of $2,840. For more information, please visit the brand’s website.