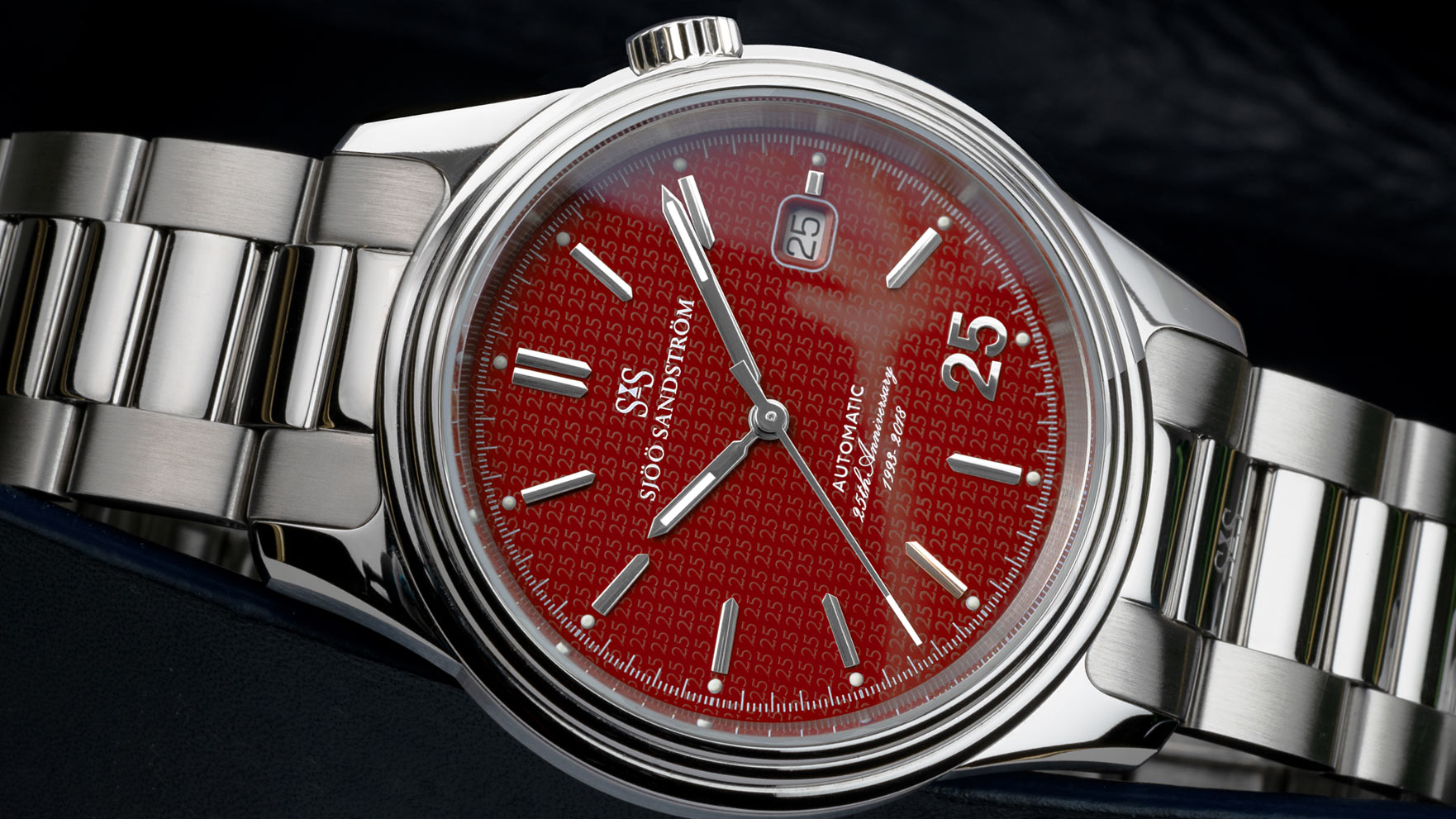 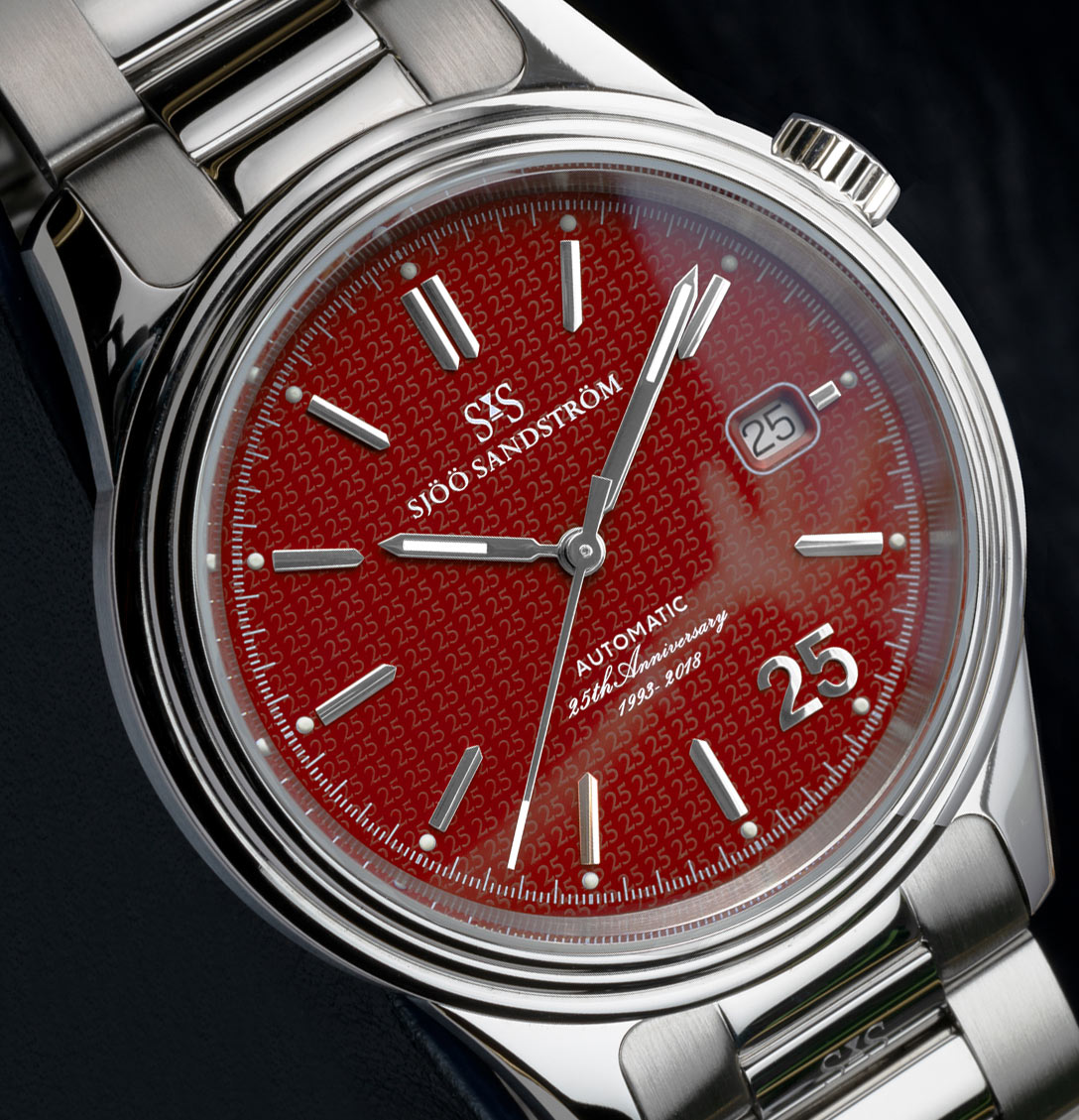 As with most folks in the watch world, I’ve got certain things that I’m drawn to in a watch. Sometimes, those are easy to put a finger on like a particularly preferred complication, and other times, it’s something you don’t even realize until you look back and connect the dots. For me, my interest in Sjöö Sandström started in that first bucket with reviewing their GMT-equipped Worldtimer and has morphed into the second category. In some undefinable way, I’ve become drawn to smaller-make watches coming out of countries that find themselves on the colder seas (Norwegian, North, and Baltic, for instance). That’s why I was interested to receive news of the latest from Sjöö Sandström, the Sjöö Sandström Royal Steel Classic Anniversary Edition. 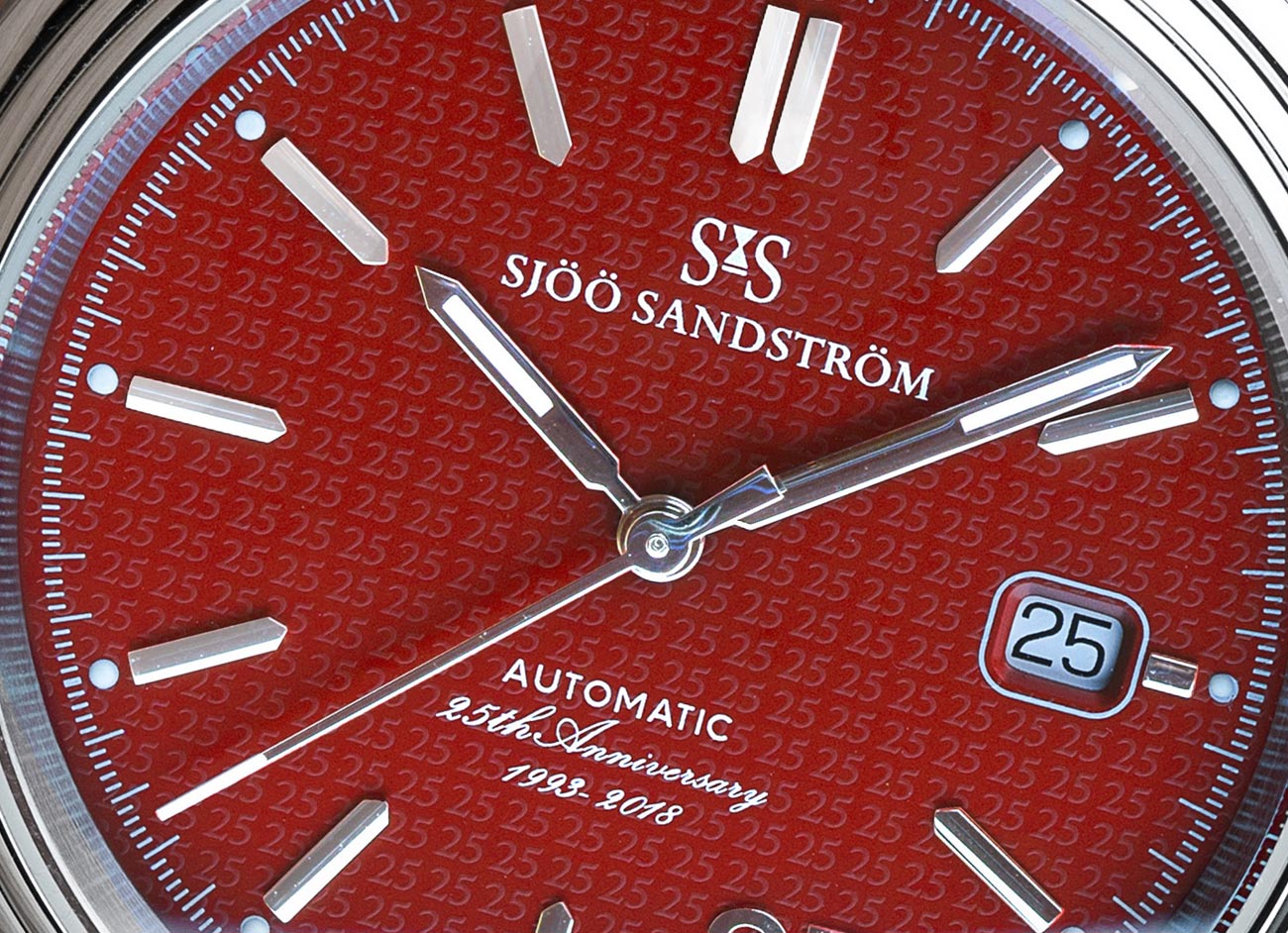 What you may not have realized – but that the Sjöö Sandström Royal Steel Classic 41mm Anniversary Edition makes perfectly clear – is that this is a brand that has been around for 25 years. No mean feat in today’s world of manufacturing ups and downs, not to mention fickle consumer tastes. However, when a brand starts out winning a design award just two years after their launch, as Sjöö Sandström did in 1995, they’re off to a good start. While that award-winning watch, the Automatic S1, may not be in the collection today, certain design choices such as the 2 o’clock crown position and their stacked bezel design have carried forward.

Both of those elements make themselves known on the Sjöö Sandström Royal Steel Classic Anniversary Edition. This is, of course, an extension of the 41mm Royal Steel Classic line. As I wrote in a different article, this is a watch that is very much what I would consider entry-level for the brand, both in terms of price, and in terms of getting introduced to the design they build into their watches. While a “simple” three-hander might seem an odd choice to celebrate an anniversary with, it points to the sort of elegant simplicity that I appreciate from them. 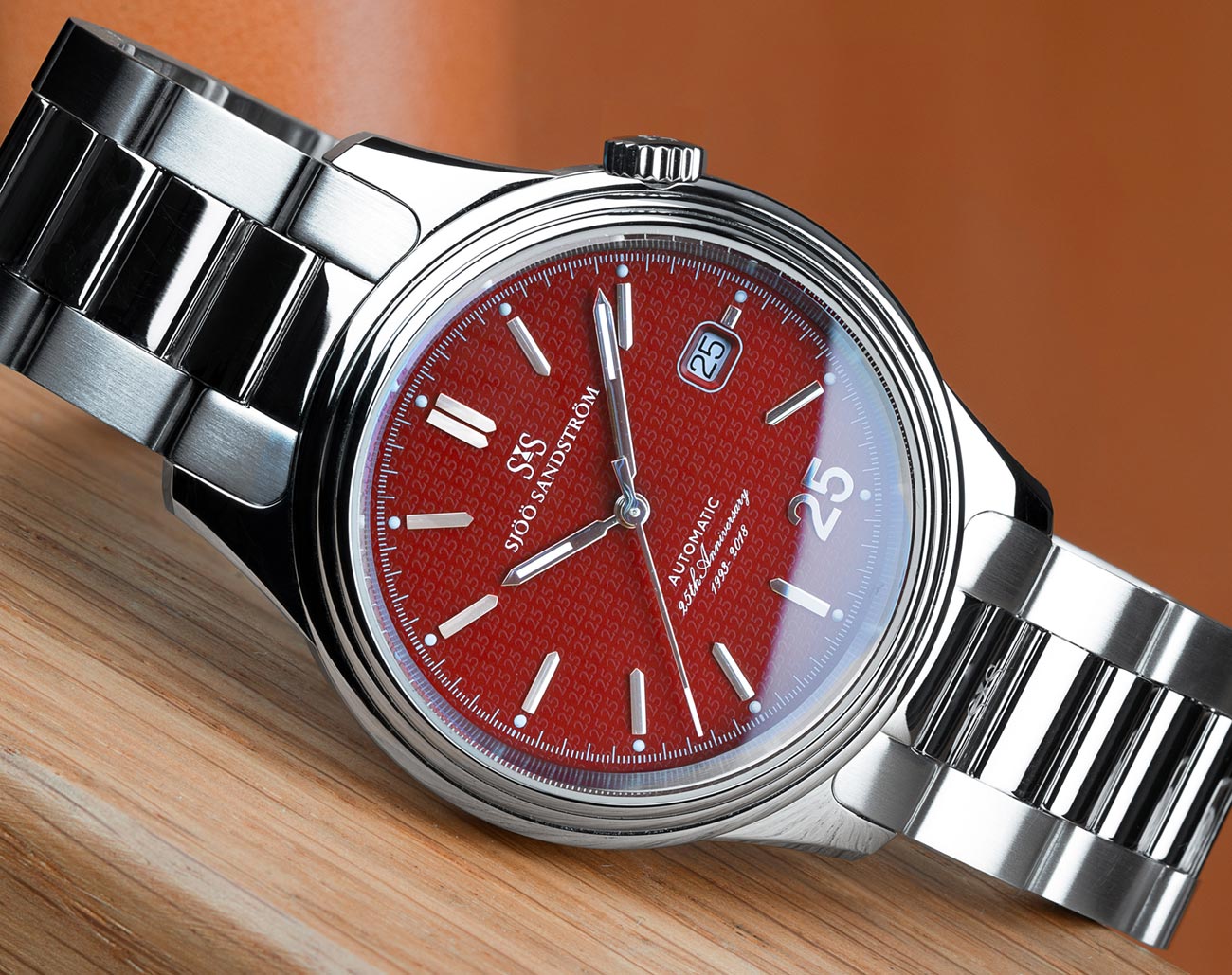 As you might expect for a luxury watch, the Sjöö Sandström Royal Steel Classic 41mm Anniversary Edition features sapphire crystal, a Swiss automatic movement (probably ETA or Sellita) with 42 hours of power reserve, and one of the nicest bracelets that I’ve experienced. No, I’ve not seen a Royal Steel Classic in person, but it is quite similar (if not identical) to the bracelet on the World Timer (complete with rounded-off lug corners), and it’s one I’ve become enamored with. It keeps a clean profile with its smooth, sportier surface, but then brings some flash to the mix with the polished center links – and then there’s the engraved logo below the bottom lug. The 41mm wide steel case has a solid case back with a large engraved “25,” and it is water-resistant to 100m.

The dial of the Sjöö Sandström Royal Steel Classic 41mm Anniversary Edition also brings some flash to the party. While the brand has not been afraid of bold colors on their existing models, the red they’ve gone with here certainly grabs the eye. Then you notice the large, polished 25 in place of the 5 o’clock index (feels a bit racing-inspired), and then the eye notices the dial has a pattern. Closer inspection reveals that like many other luxury brands have done, there is something embossed onto the surface of the dial. In this case, it’s a repeating “25,” further underscoring that this particular edition is a rather special one. The hands and pips at each of the hour markers are equipped with Super-LumiNova. 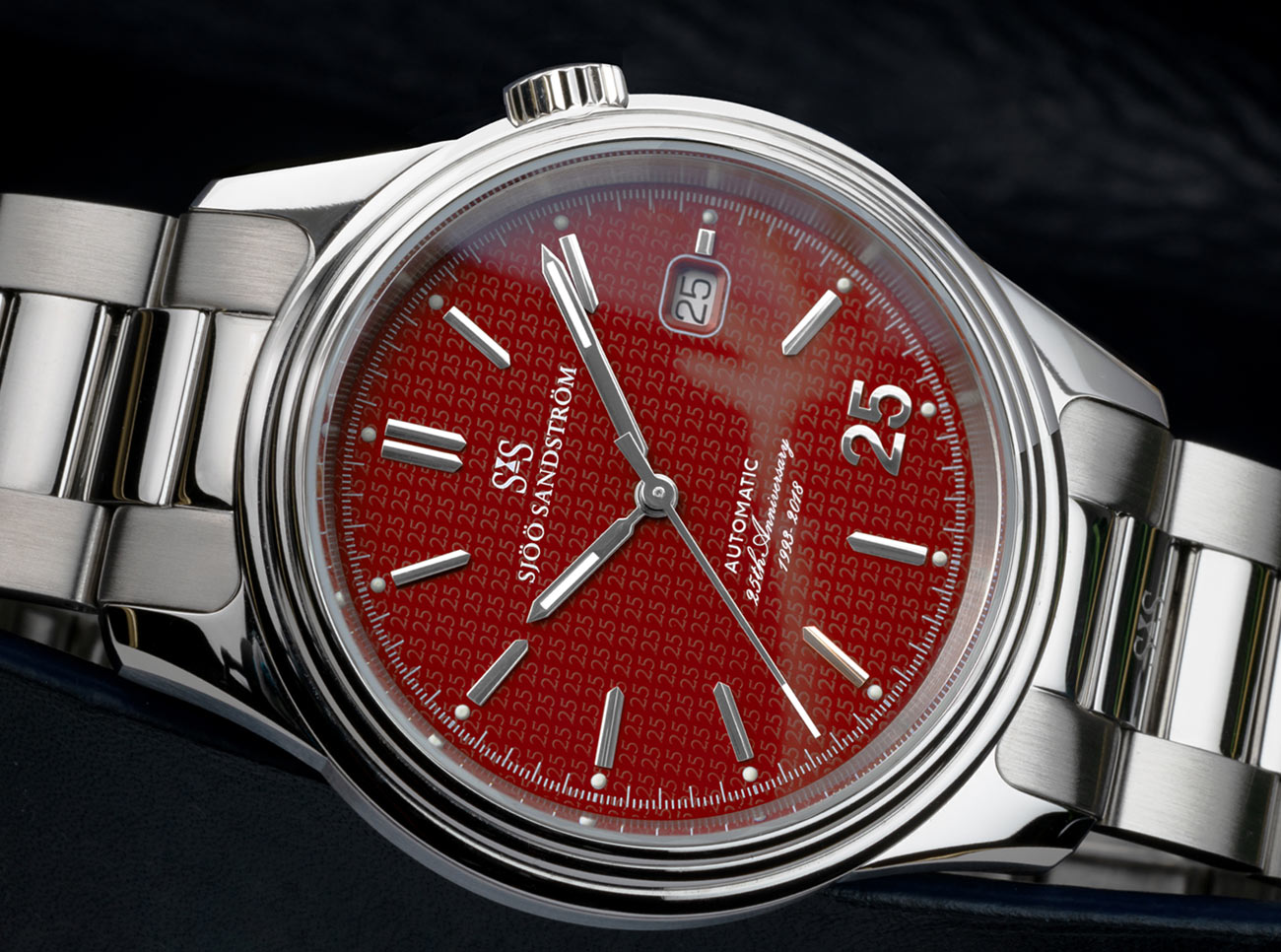 For those looking to celebrate the anniversary of the brand by owning a Sjöö Sandström Royal Steel Classic 41mm Anniversary Edition, you’ll be part of a rather select club. Only 100 of the lady in red will be produced, commanding a price tag of 22,100 SEK – once you remove the VAT, that’s about $2,000 with today’s exchange rates. Past that, you’ll need to wait until the next anniversary, I suppose. Or, if you like the looks of the Royal Steel Classic, there are five other variants available, with pricing ranging from $2,000 to about $2,800, depending on finishes and bracelet or strap choices. As I say, the Sjöö Sandström Royal Steel Classic is a solid representative of the brand, and the anniversary edition is an appropriate way to celebrate. Learn more at sjoosandstrom.se.