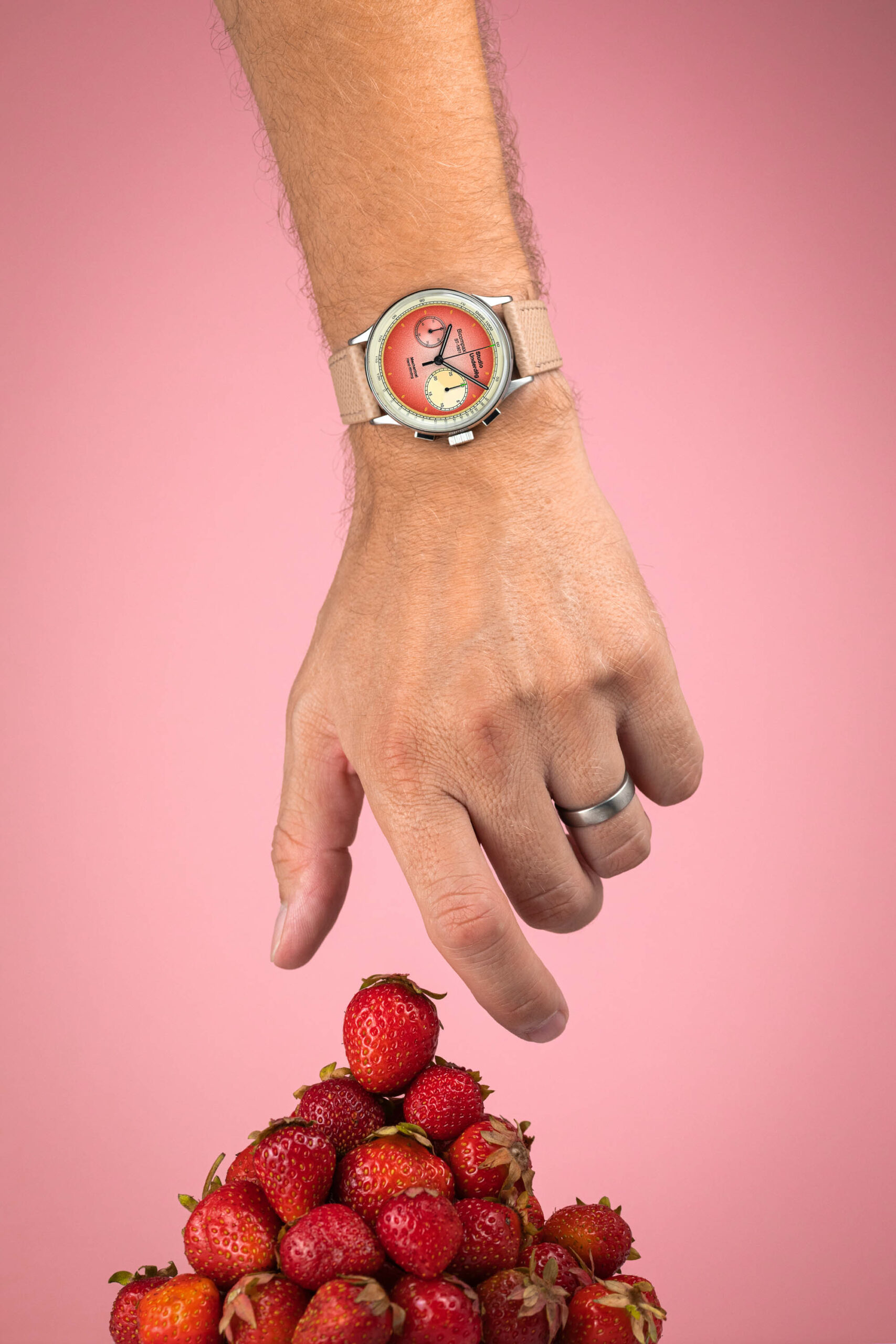 As a brand that is committed to embracing the fun and playful side of watchmaking and not taking itself too seriously, Studio Underd0g frequently draws its design inspiration from unlikely and sometimes even borderline irreverent sources that include everything from watermelons and eggplant emojis to mint chocolate chip ice cream and a pair of sneakers. Like many small-scale independent brands, Studio Underd0g is (more-or-less) a one-man operation, and the company even jokes about this on its website, featuring three different photos of the founder on the “About Us” page, with corresponding captions that designate “Richard” as the Founder, “Rich” as the Head of Design, and “Ricky” as the Marketing Manager. 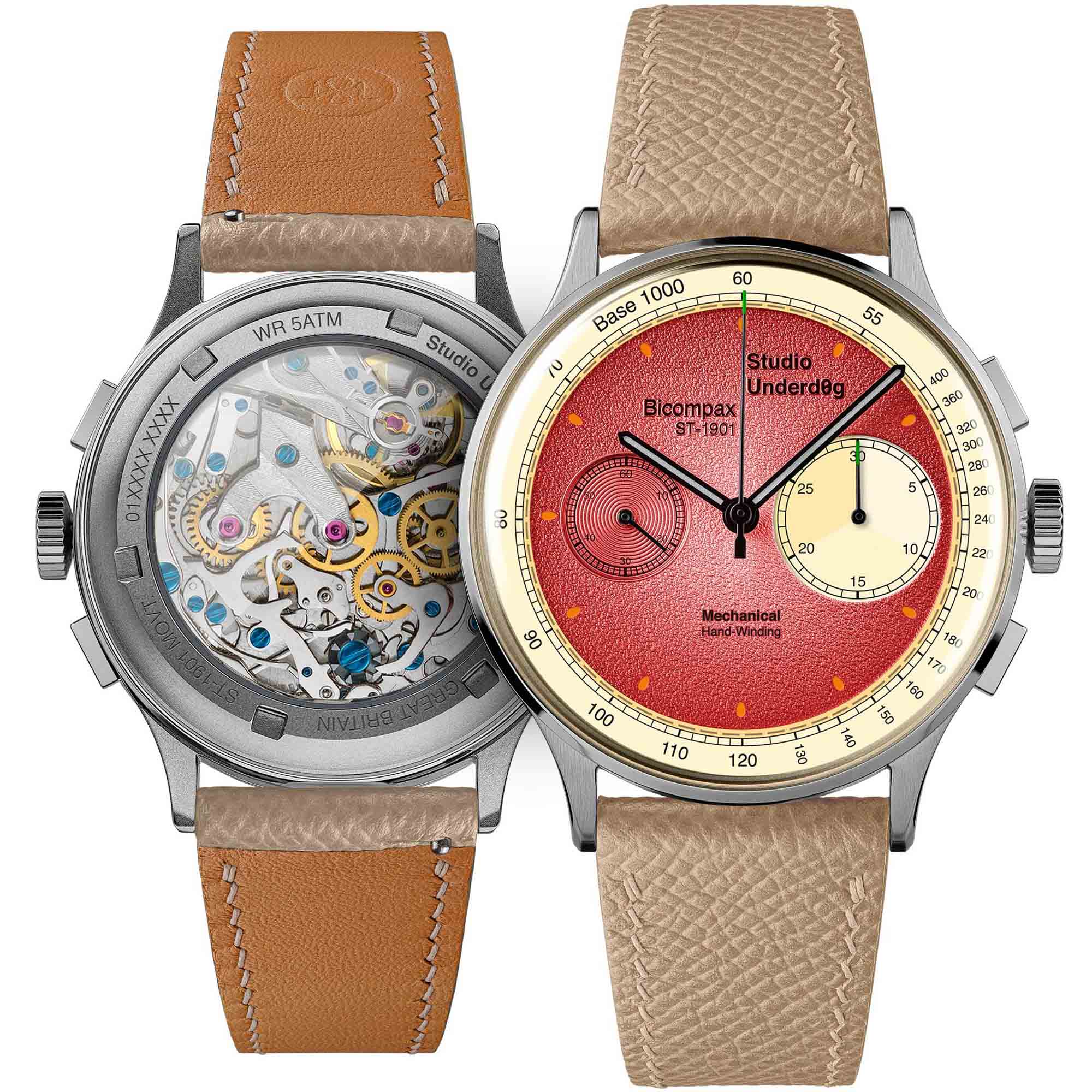 Studio Underd0g’s latest release started out as a joke within Instagram’s comments section between Richard (or maybe it was Rich or Ricky) and watch and tennis journalist Miguel Seabra, who was an early advocate of the independent brand. Miguel had mentioned that his vision of a perfect day involved soaking up the British summer sunshine while watching a game of tennis and enjoying some strawberries and cream. Fast forward a short while, and a few prototype colorways later, and Studio Underd0g is now formally launching the Strawberries & Cream chronograph watch. Like past releases, the new model is not so much an entirely new watch as it is a fresh take on the brand’s signature budget-friendly mechanical chronograph design, which offers a fun and funky color profile inspired by a classic summer treat. 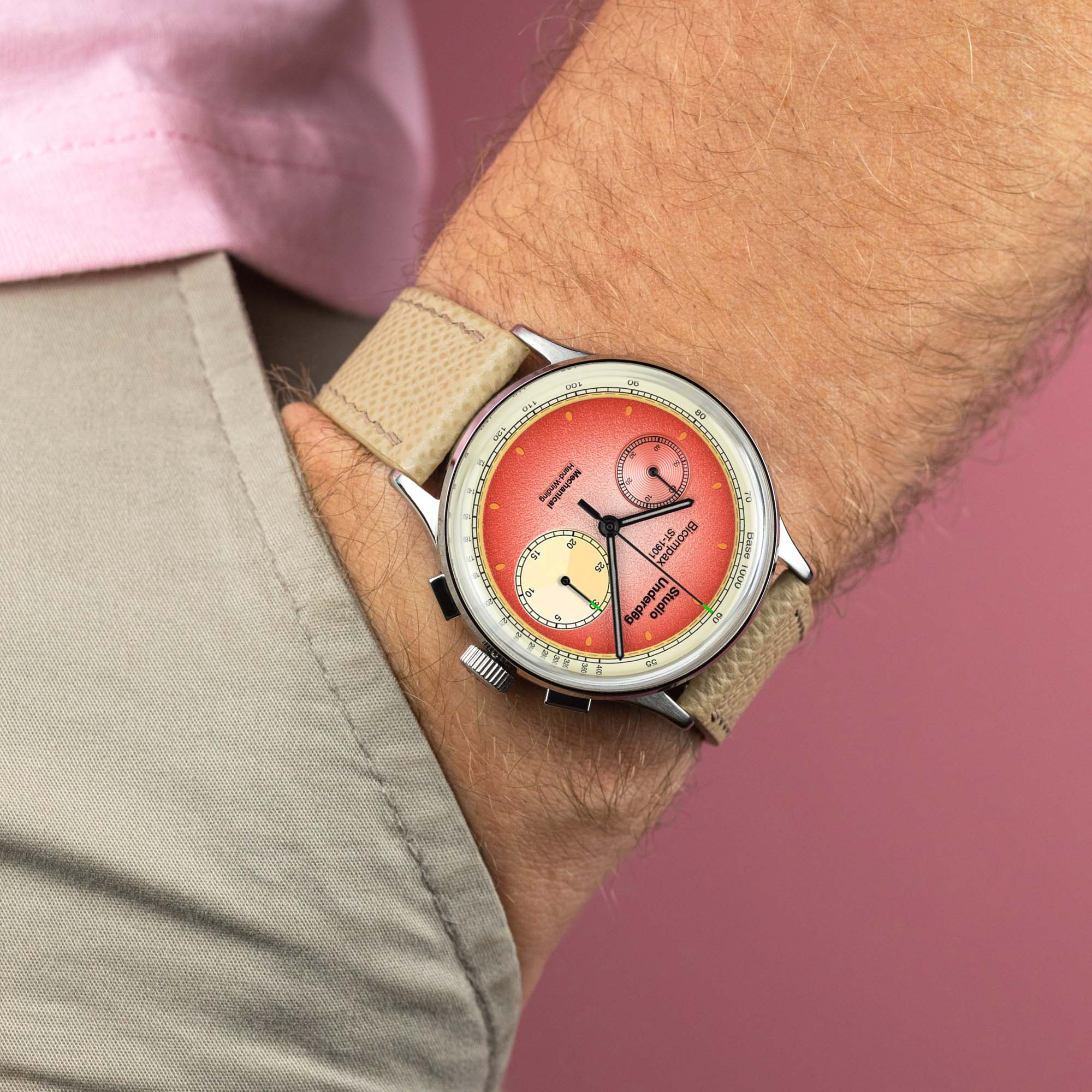 The 316L stainless steel case of the Studio Underd0g Strawberries & Cream watch will be instantly familiar to those who have previously handled the brand’s releases, and it measures 38.5mm in diameter by 44.5mm lug-to-lug, with an overall thickness of 13.6mm (10.8mm excluding crystal), and a standard lug width of 20mm. Fitted to the top of the case is a double domed sapphire crystal, while the screw-down exhibition caseback features a flat sapphire crystal and helps provide the watch with 50 meters of water resistance. A signed crown at 3 o’clock enables winding and time-setting, while the pair of pushers adjacent to it offers command of the mechanical chronograph complication. 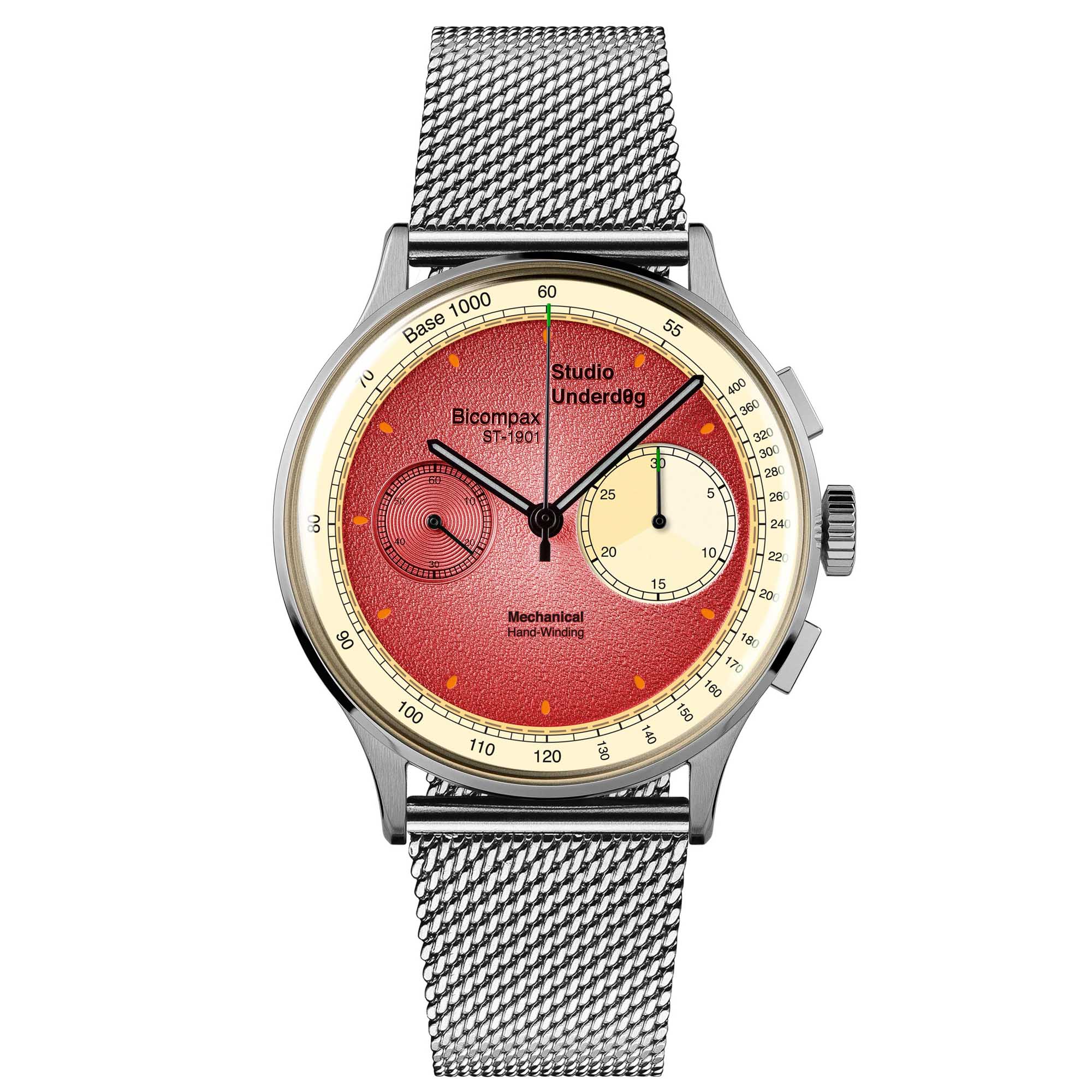 The dial of the Studio Underd0g Strawberries & Cream watch is where the design inspiration becomes immediately apparent. Surrounding a textured red/pink center section is a cream-colored ring containing a tachymeter scale, while a large cream-colored register for the chronograph sits at the 3 o’clock location. The hours and minutes for the time are displayed by a pair of centrally-mounted hands that are joined by the chronograph seconds hand, while the running seconds appears as a smaller register at the 9 o’clock location, which matches the red/pink surface of the dial surrounding it. Small pops of green on the tips of the chronograph hands serve as a reference to the stems of the strawberries, while Super-LumiNova C3 offers easy access to the time in the dark. 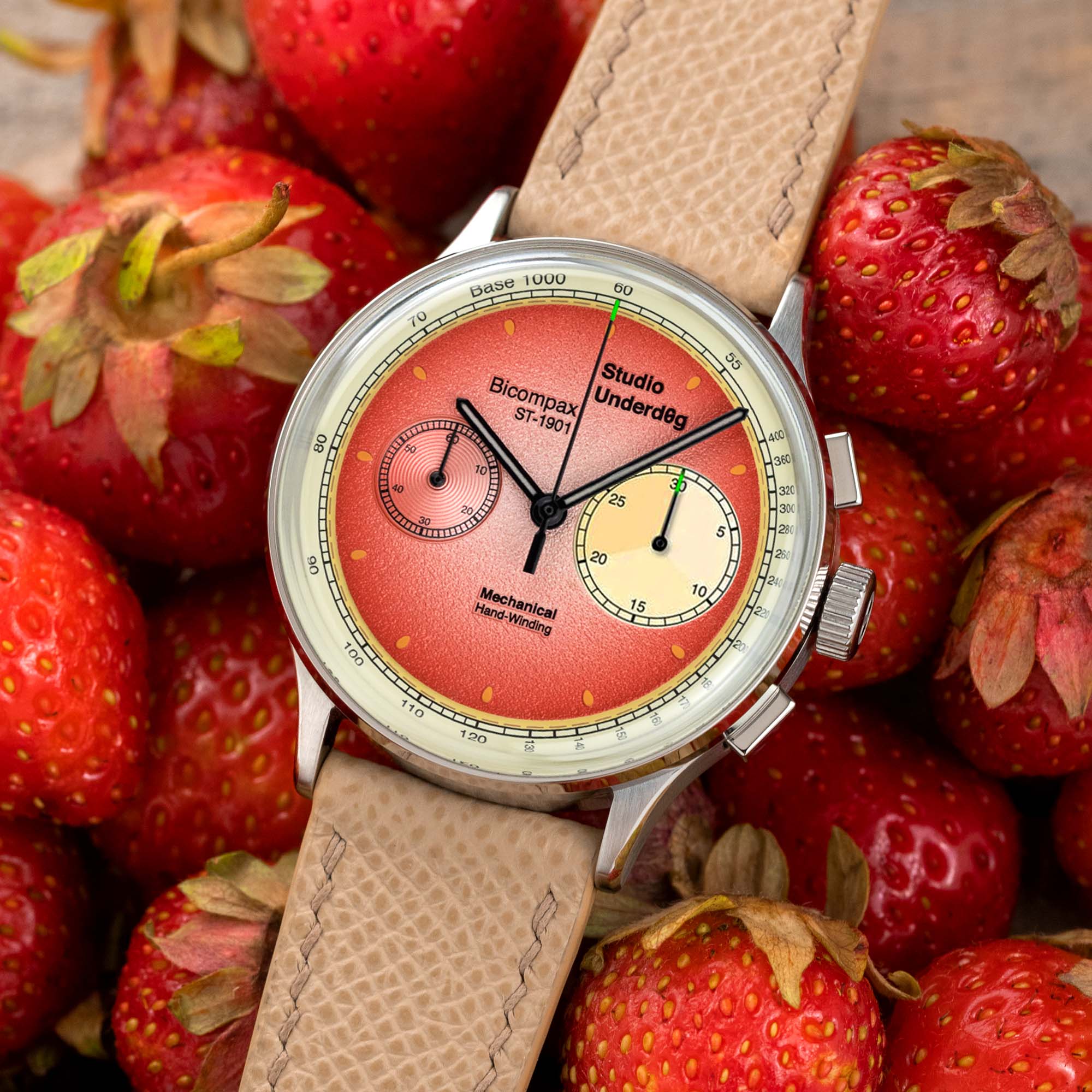 Powering the Studio Underd0g Strawberries & Cream is the Seagull manual-wind cal. ST-1901 chronograph movement, which features a column wheel and swan neck regulator. The movement itself follows the design of the Swiss Venus cal. 175, which had its tooling and technical drawings sold to the Chinese Air Force during the early 1960s. Running at a frequency of 21,600vph, the Seagull ST-1901 offers users a 50-hour power reserve (or 45 hours with the chronograph running). Additionally, while Seagull movements can sometimes have a reputation for being a bit hit-or-miss when it comes to QC and regulation straight from the factory, Studio Underd0g has partnered with Horologium, which will carry out a full independent QC inspection process on the watches. The process includes demagnetization, accuracy/rate review (three positions), and regulation wherever necessary. A report card is included with every watch and each one will come backed by a two-year limited warranty. 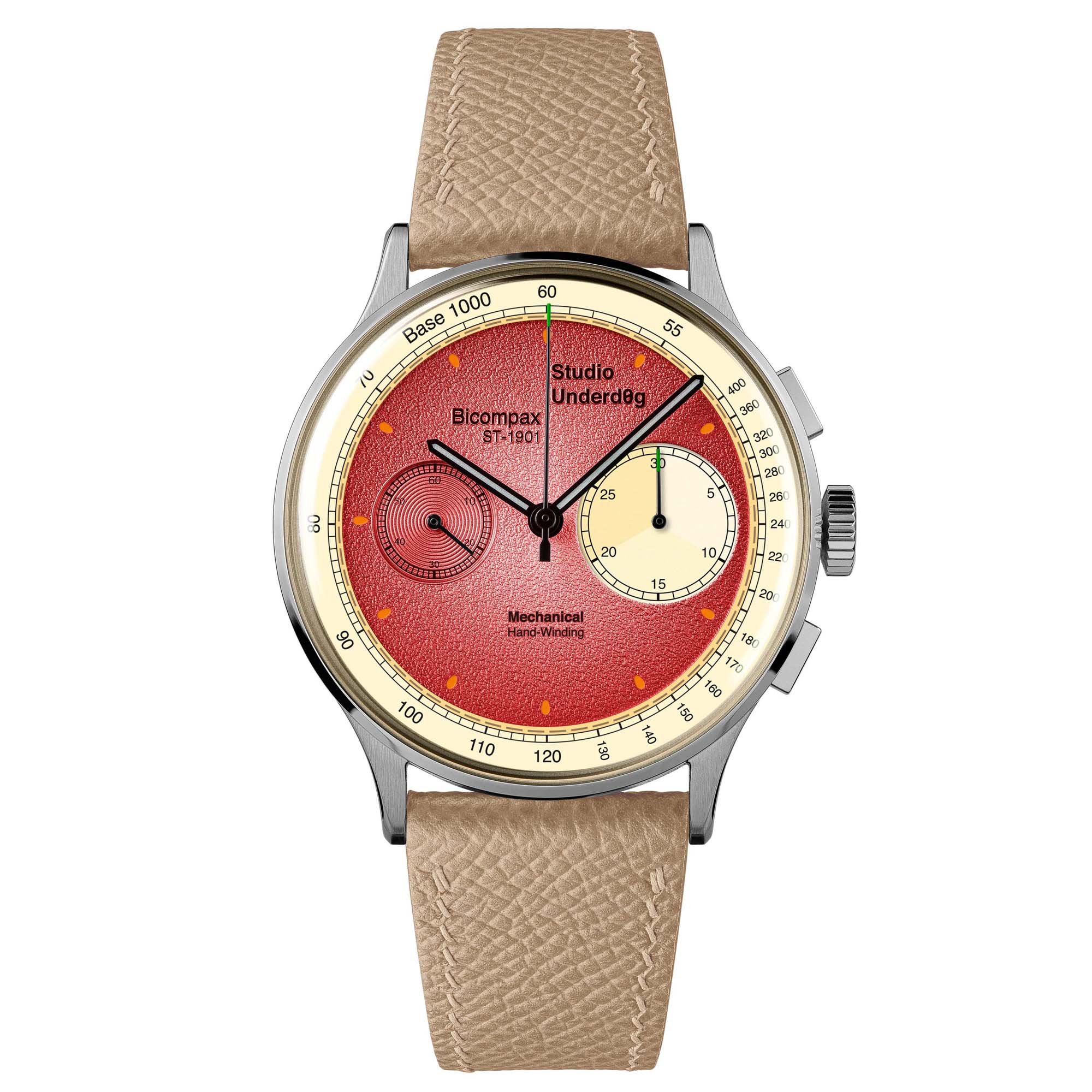 Given that Miguel Seabra is a self-confessed “strapoholic” when it comes to watches, Studio Underd0g felt that it was only right for the Strawberries & Cream watch to come with two different strap options, and both are included with the watch when purchased. In addition to a tapered stainless steel Milanese mesh bracelet, the Studio Underd0g Strawberries & Cream includes a beige Epsom Calfskin strap that was handmade by fellow British independent company The Strap Tailor (AKA David Richards), and involves a unique multi step tanning process that takes nearly a month to complete. 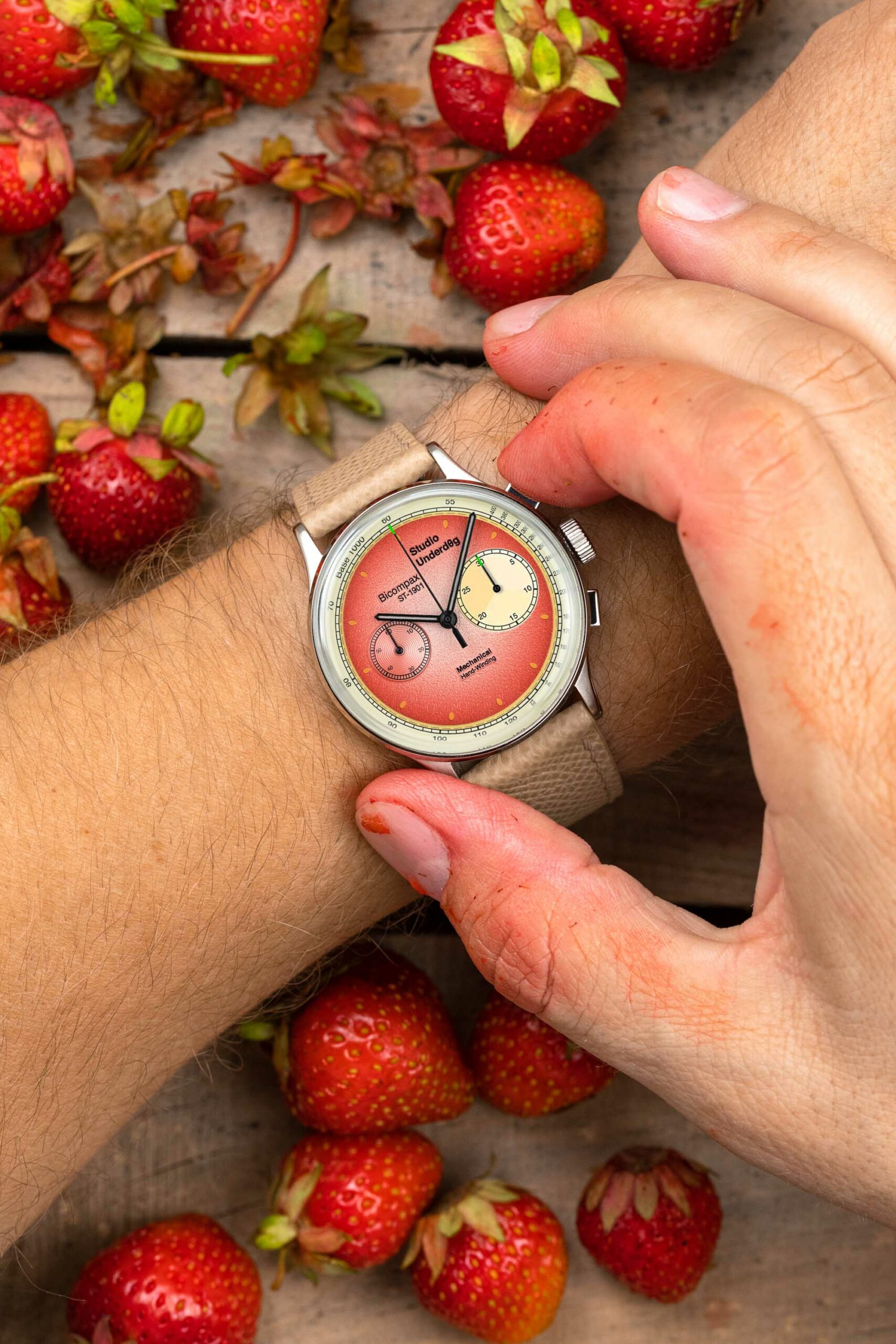 As a brand created by someone who loves watches, and that primarily caters to other watch enthusiasts, Studio Underd0g wants to make sure that its products end up in the hands of people who actually want to own them, rather than flippers who are hoping to make a quick profit. Consequently, Studio Underd0g will be making the Strawberries & Cream watch available for pre-order from the 9th to the 16th of August 2022 with an official retail price of $675 USD. Once the 7-day pre-order window has closed, the order page will not be reopened and the watch will not be produced again. With this approach, interested buyers will have plenty of time to place their orders, without having to worry about all available examples ending up in the hands of resellers within a few minutes of launch. For anyone who missed out on the brand’s past limited edition releases or for anyone who simply loves strawberries and cream, this latest release from Studio Underd0g offers enthusiasts a fun and affordable way to add something truly different to their respective collections. For more information, please visit the brand’s website.