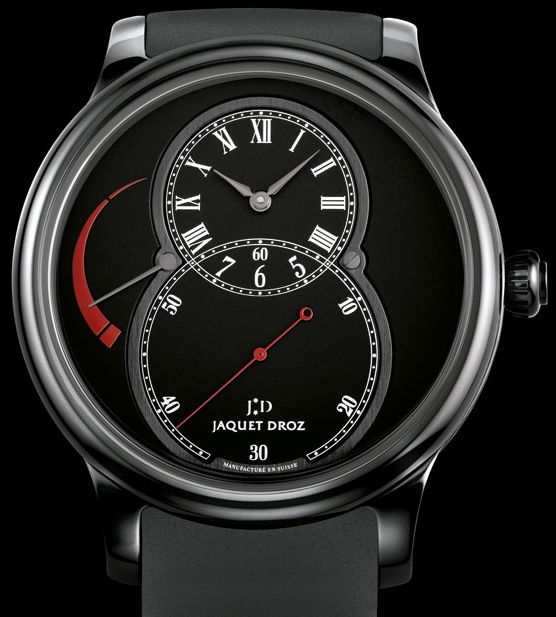 After the recent design success that Jaquet Droz had with its (silly named) Grande Second Sport Utility Watch, the company began to realize an emerging market for the brand that included a younger constituency. The next step it seems is a more toned down, but equally energetic watch which is the Ceramic Power Reserve.

The case is entirely ceramic, which is of course one of the haute materials being used lately. Ceramic cases always have a sheen to them, but can vary in terms of gloss. I’d guess that this Jaquet Droz is somewhere in the middle. You’ll probably agree judging from the pictures. The watch comes in either black, with a matching rubber strap. You can get a similar Jaquet Droz watch in white ceramic, but that model does not have a power reserve. I’d have to say that I am reminded of Bell & Ross with their latest BRS watches. Perhaps not the design, but more the overall feeling and tone of the watches. They seem to be aimed squarely at the same market. 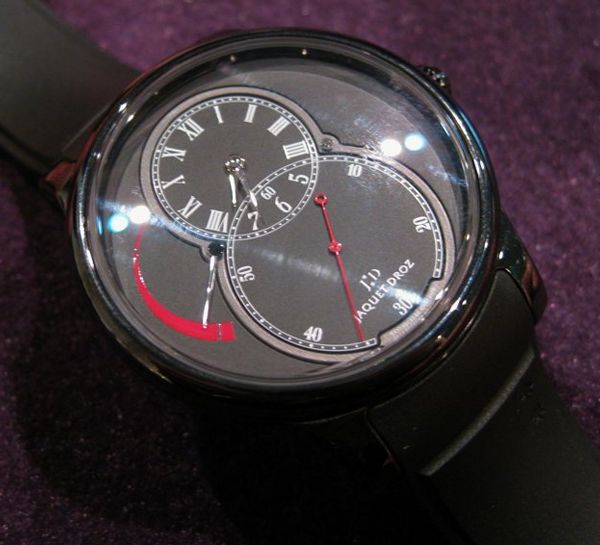 The dial shares the typical Jaquet Droz Grande Seconds motif, which has been, and still it nice. The addition of the elegant power reserve indicator is a nice and sport touch, especially when done in red to compliment the red seconds hand. The overlapping hour and minute dial, and seconds dial are framed with a raised metal section that contrasts well with the matte black dial color. A screw on the right side of the dial interacts nicely with the stem of the power reserve indicator. While this look is undoubtedly classic Jaquet Droz, your eyes require little effort in understanding that this is a more interesting and playful design. I call it suave because it does not try very hard, and still looks nice. I do feel as though this watch IS a smooth character.

Inside that watch is an in-house automatic mechanical Jaquet Droz caliber 4063D with double barrels that has a 68 power reserve. The movement is viewable through the see-through caseback window, and the rotor is actually done in 22k gold. The watch is water resistant to 30 meters, which is enough, but don’t go giving with it. The rubber strap is nicely textured, and the deployment is steel (PVD coated), not ceramic. Best of all, the watch is largely sized at 44mm wide. I think this is a great looking timepiece, but it won’t come cheap. Figure about $10k – $15 retail.

Thanks to PuristSPro.com for some of the Jaquet Droz Ceramic Power Reserve watch photos used.