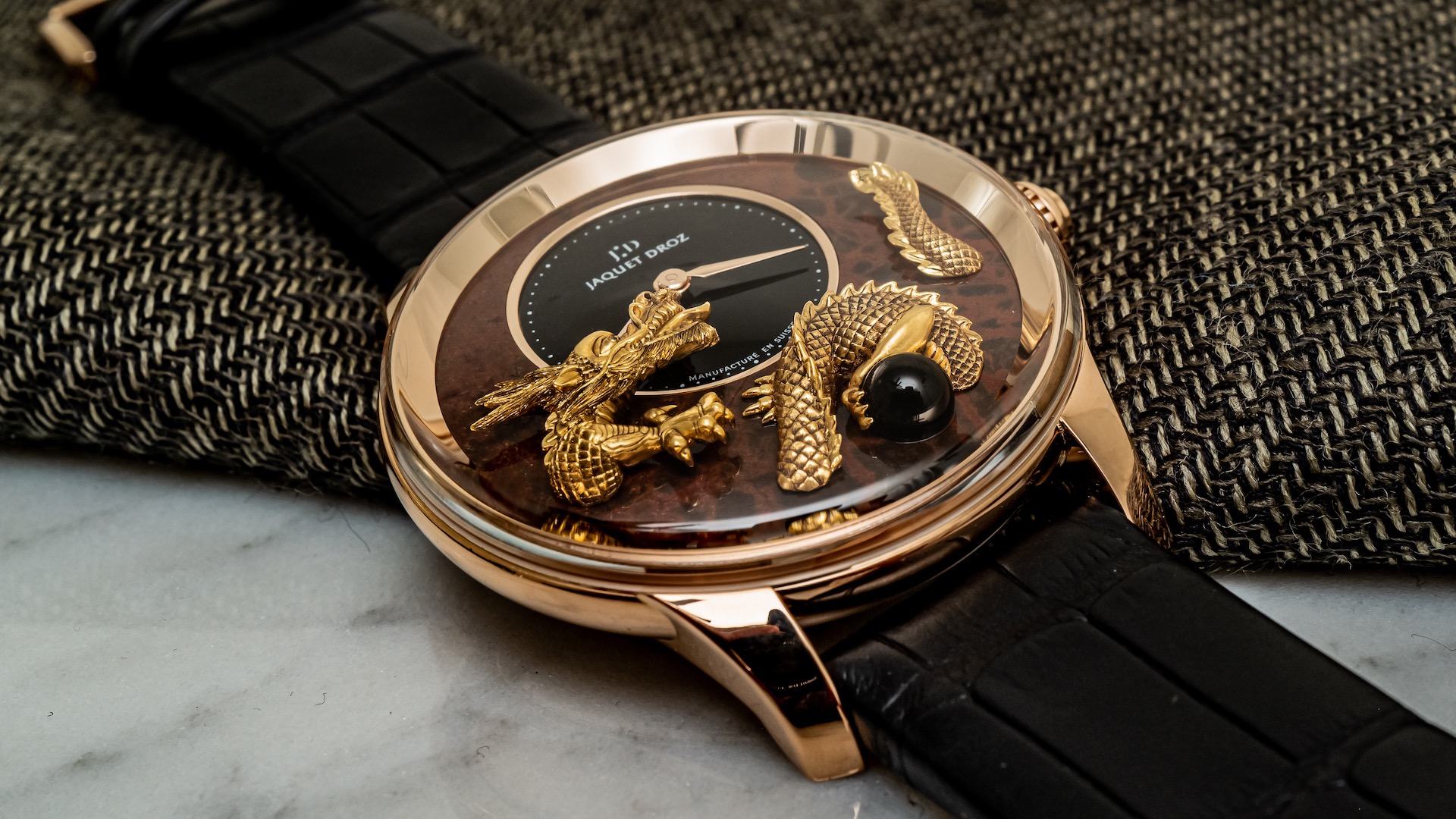 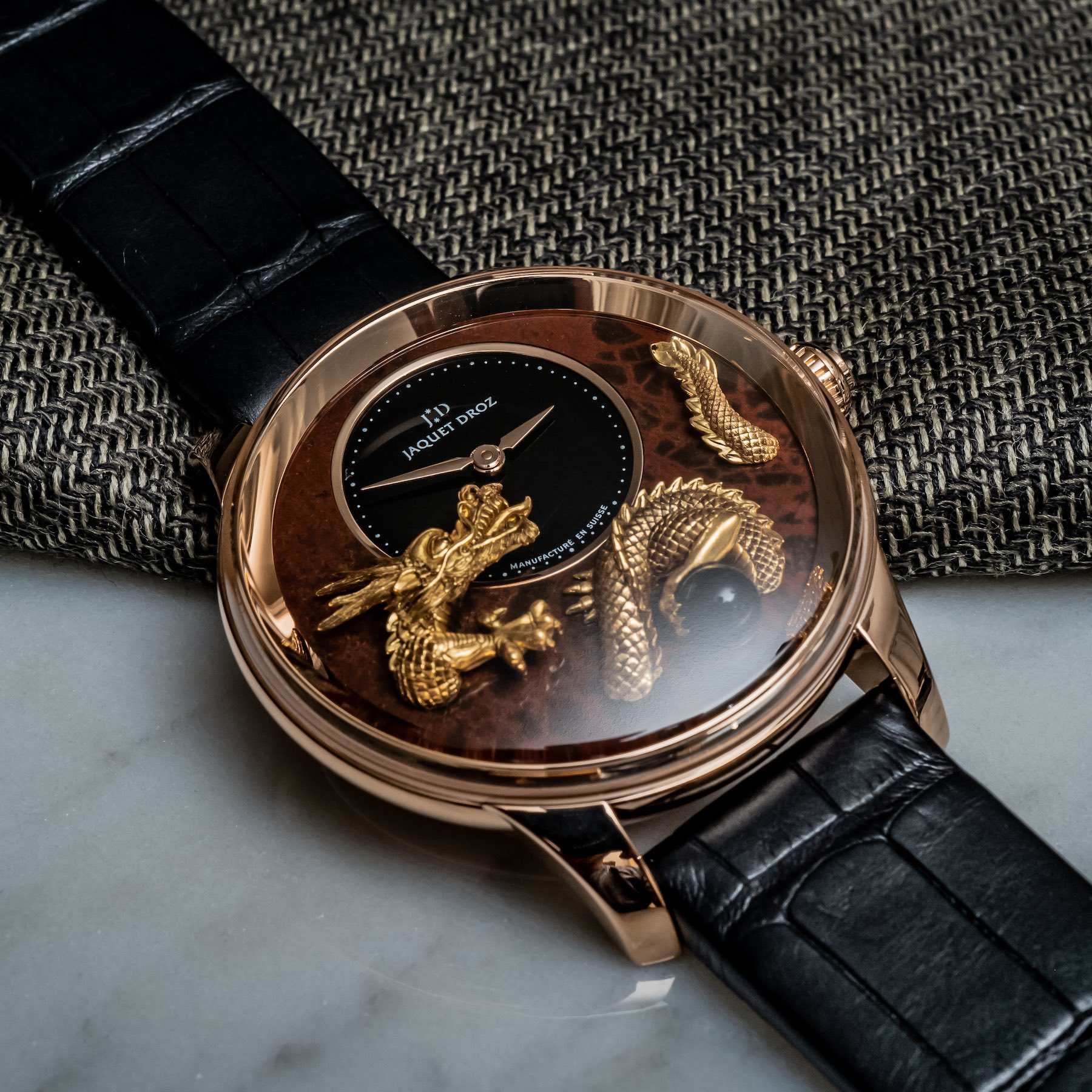 For many of us, Jaquet Droz is best known for its Regulator-style Grande Seconde watches and its absolutely captivating automaton Charming Bird that debuted just back in 2013. However, since its founding in 1738, Jaquet Droz has a long history of creating some truly breathtaking pieces that most people will never get to see in person, let alone touch and wear. I recently had such an opportunity to spend a week with such a piece. Released earlier this summer, the Jaquet Droz Petite Heure Minute Relief Dragon is an exquisite representation of a timepiece that is better described as a work of art.

In the prolonged drought of a design environment with a compulsive prediction for minimalism, I drank up the elaborate decadence and sculptural artisanship of the Jaquet Droz Petite Heure Minute Relief Dragon. 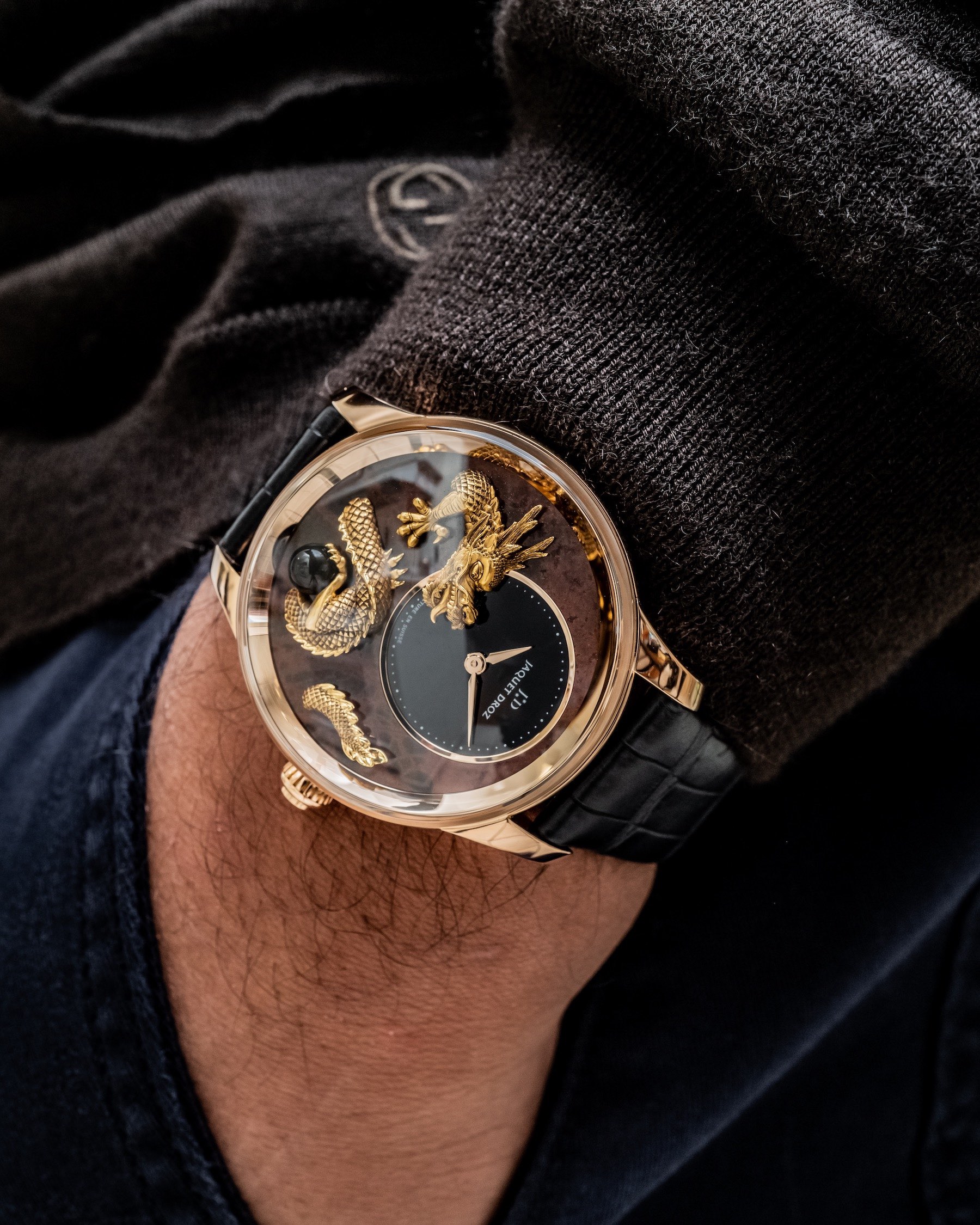 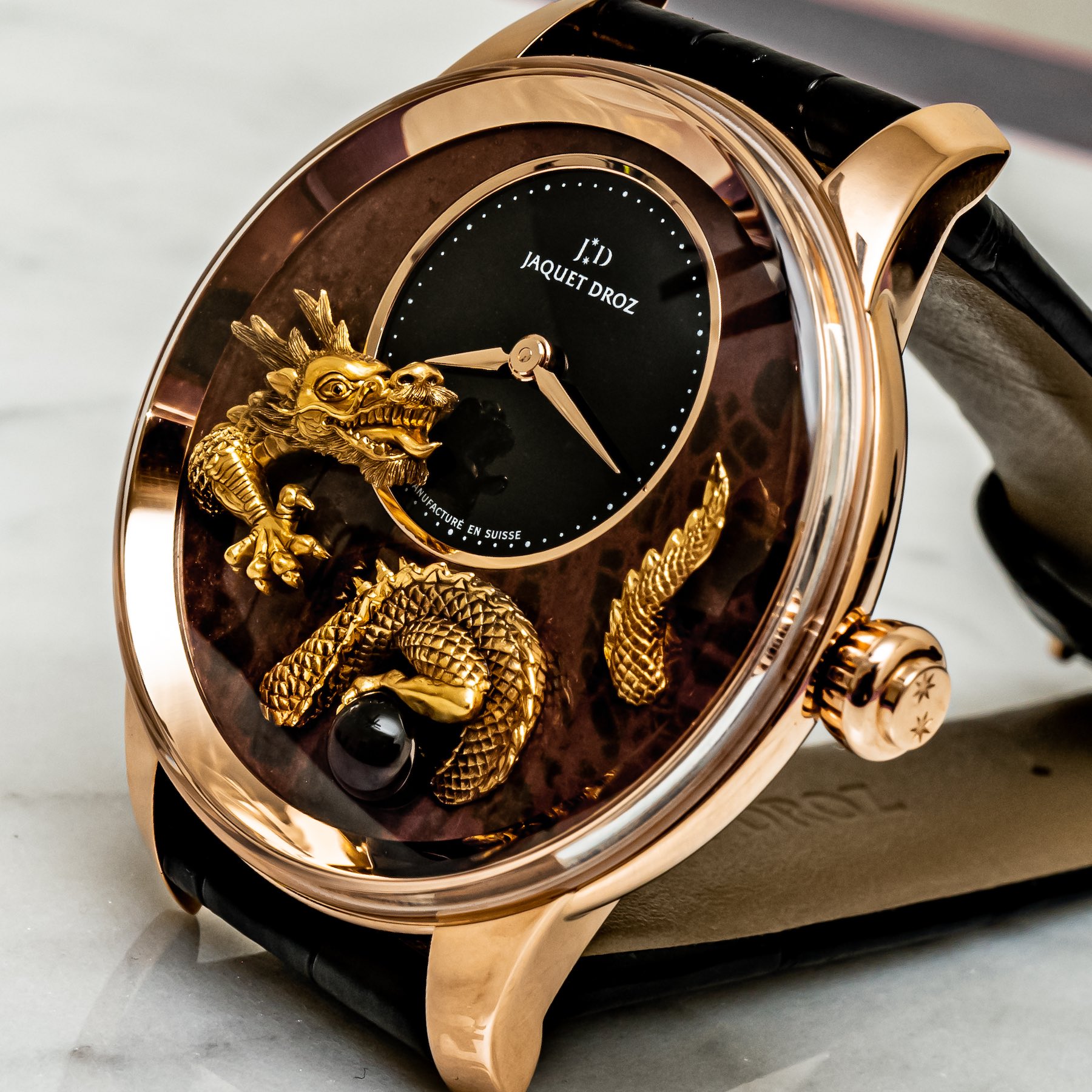 This isn’t the first or close to the costliest Jaquet Droz I’ve handled, but I am still pretty sure the first words to come out of my mouth were all expletives when I first picked it up. Note that this is not one of Jaquet Droz’s automaton pieces like the famous Charming Bird, but rather a more, for lack of a better word, traditional timepiece. The Jaquet Droz Ateliers D’Art collection is where the brand’s most elaborate and intricate pieces are created — by hand, of course. The elaborate painting, enameling, Paillonné enameling, Intaglio printing, and what we see here, sculpted and engraved ornamentation work from Jaquet Droz, is all done under the Ateliers D’Art. 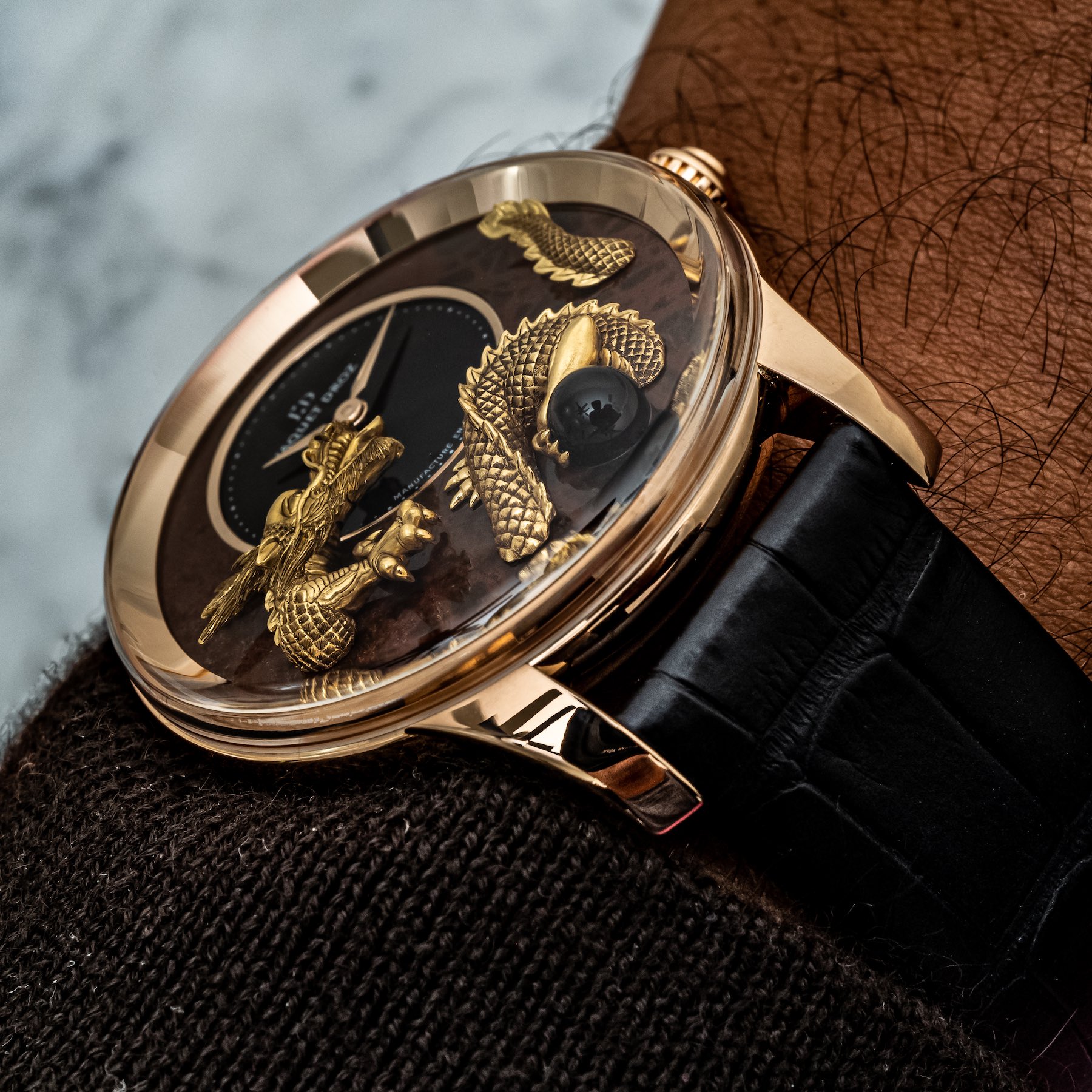 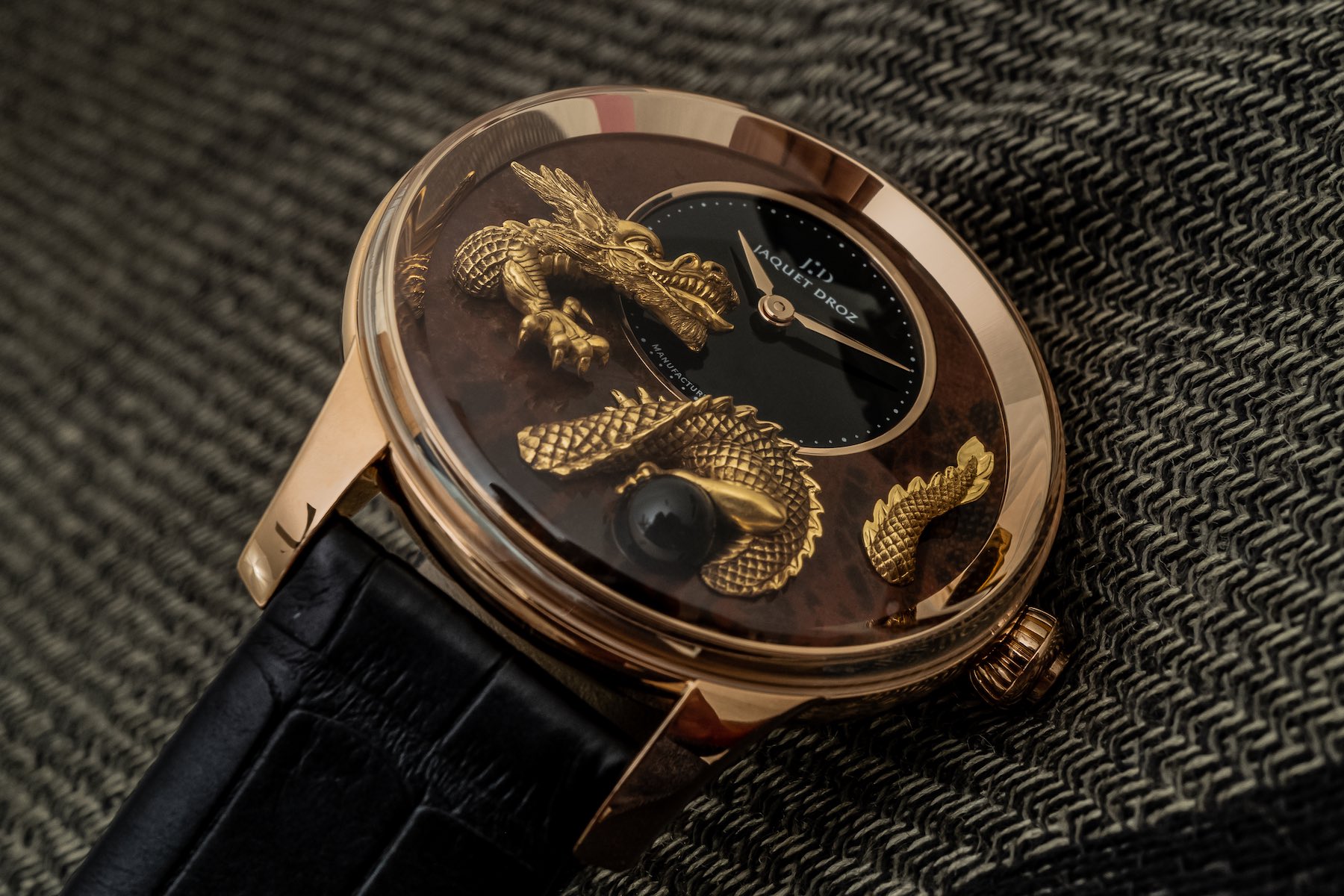 Here, Jaquet Droz creates an interpretation of the Earth Dragon, which is the fifth element in the 60-year Chinese calendar cycle. I want to briefly note that Jaquet Droz actually has a long history in China, dating back to the late 1700s when it was the first-ever clockmaker to be imported into the country. In fact, Qing Dynasty Emperor Qianlong was a personal collector, and several Jaquet Droz pieces are preserved in the Forbidden City Palace Museum. I’m not going to be naive and ignore the buying power and importance of the Chinese market, especially these days, but I do think Jaquet Droz’s history in China is unique and worth understanding. 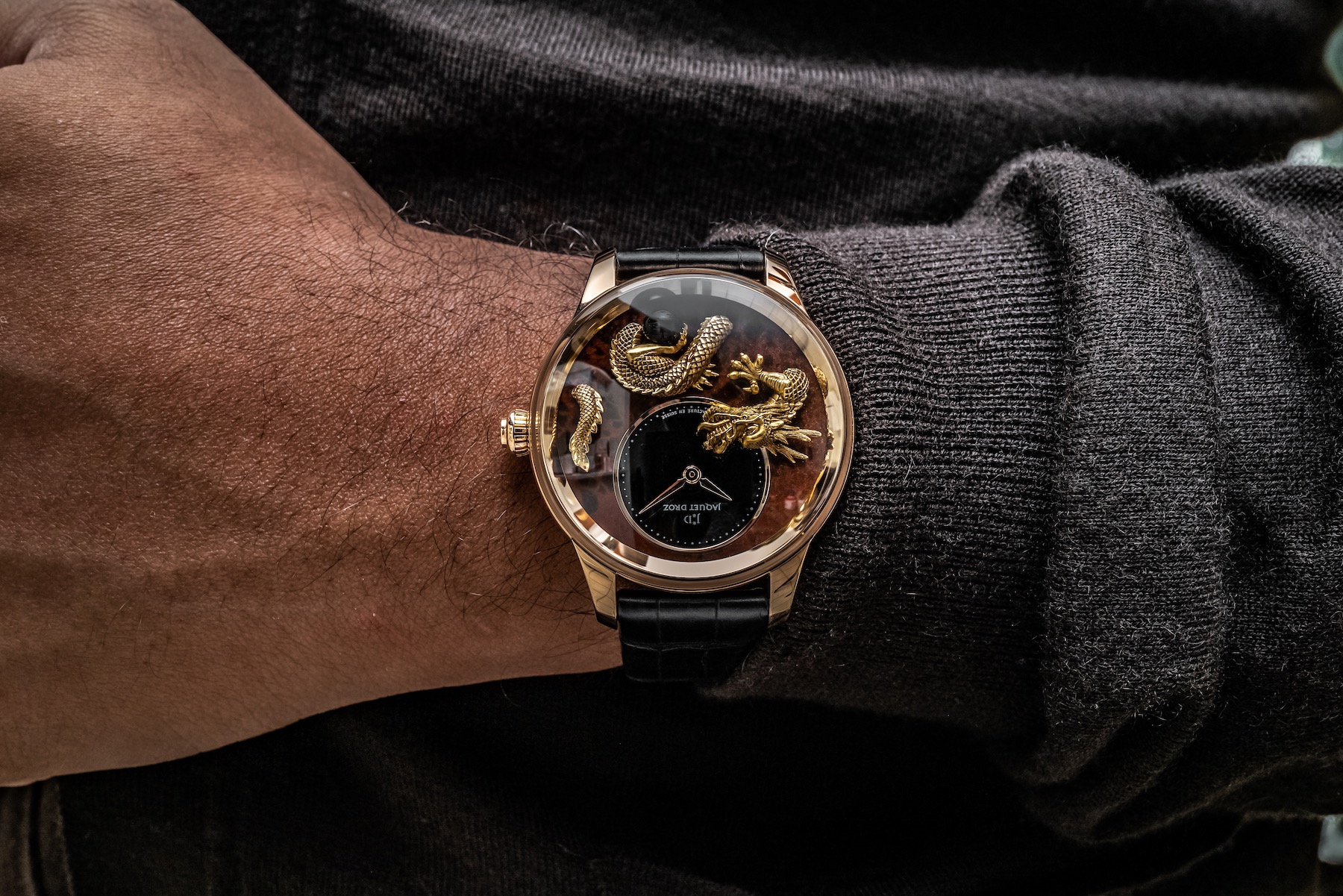 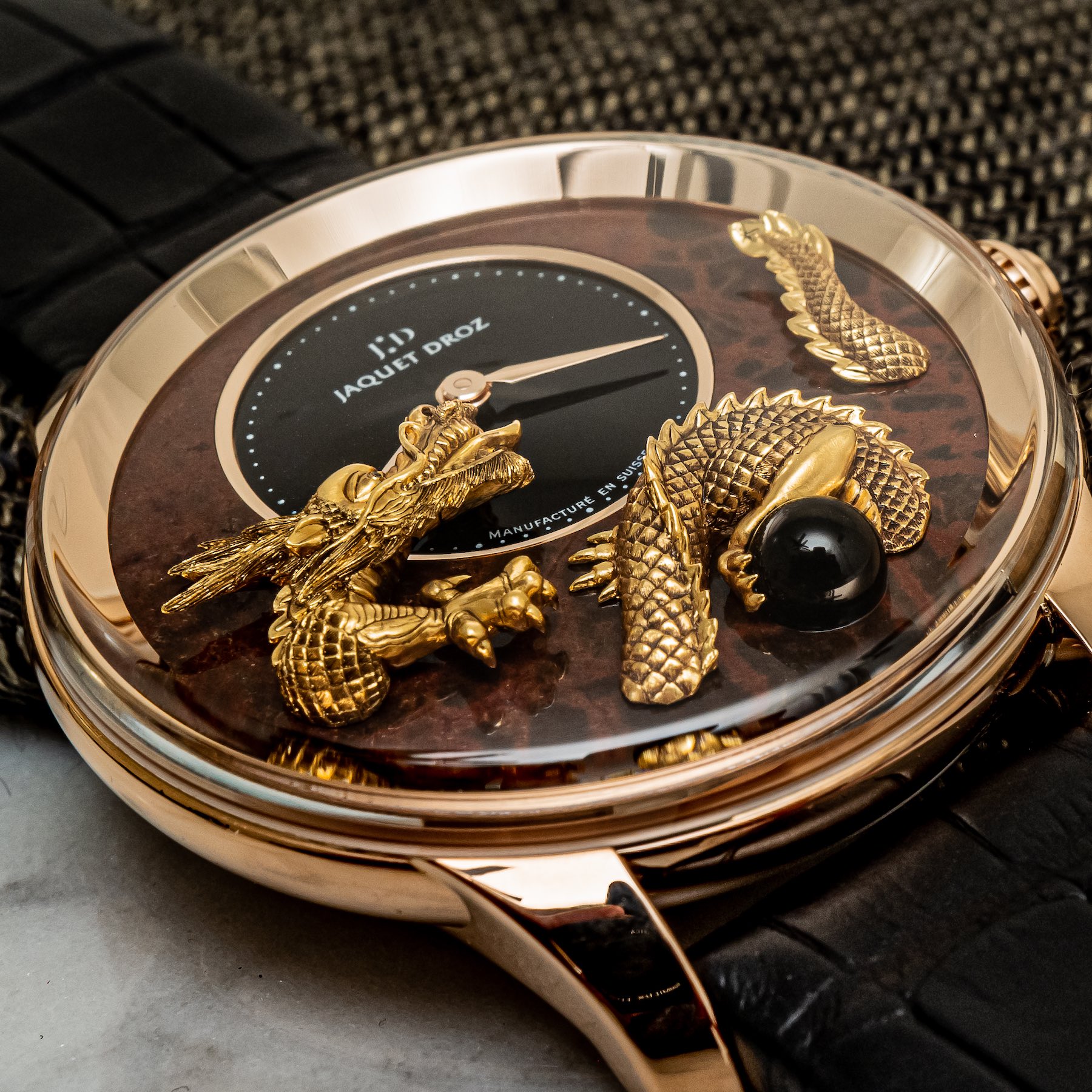 Obviously, the eye is immediately drawn to the golden dragon stretching across the dial. The mythical beast is done in solid 18k yellow gold with each part hand-engraved, down to each scale, claw, and the entire face. The subdial at 12 o’clock with the red gold hour and minutes hands is done in black onyx, which makes for a brooding pond of deep black on the dial that is echoed by the onyx bead the dragon has clutched in its claws. If you didn’t know already, I’m sure you can deduce that black onyx carries some positive symbolism, specifically wellbeing, luck, and prosperity. 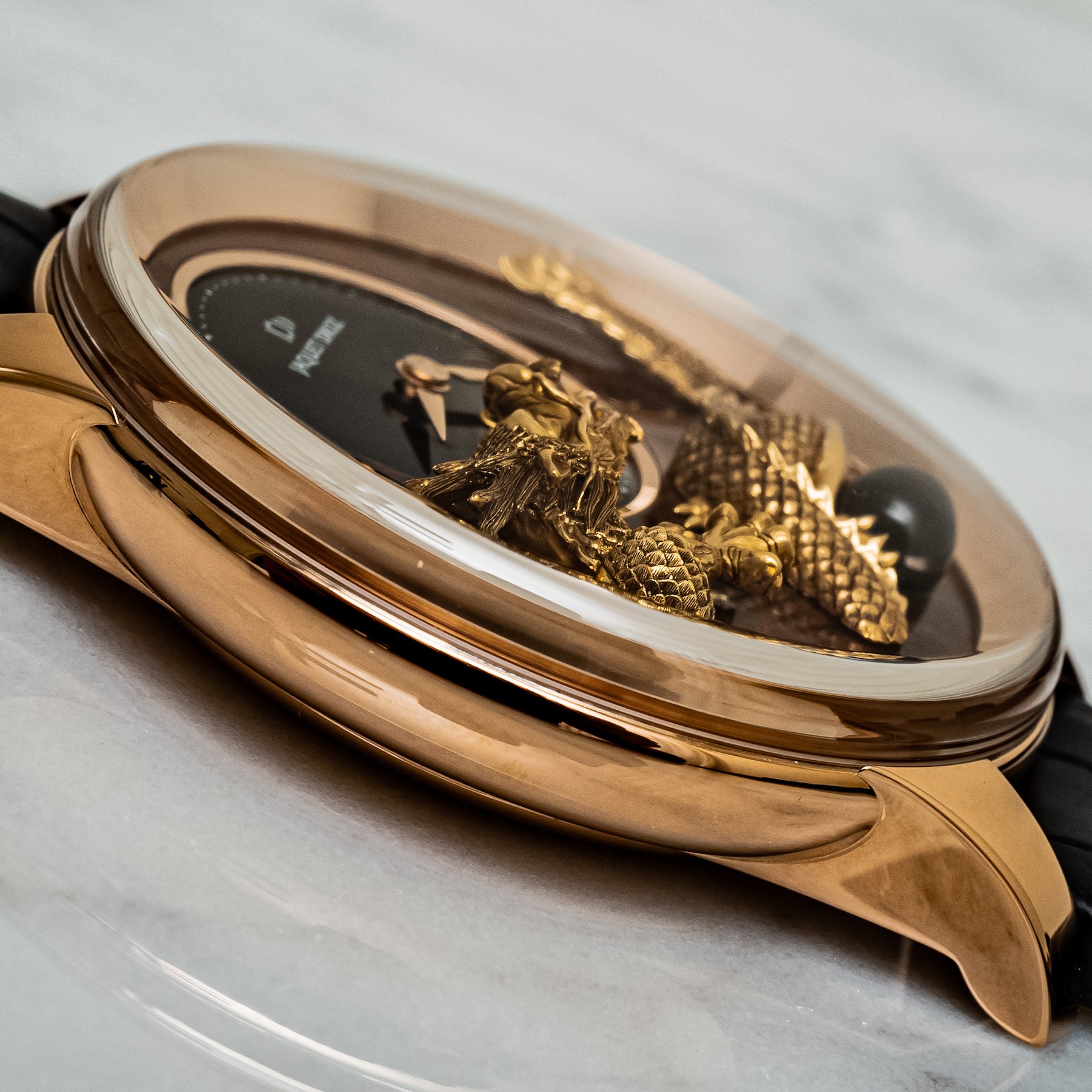 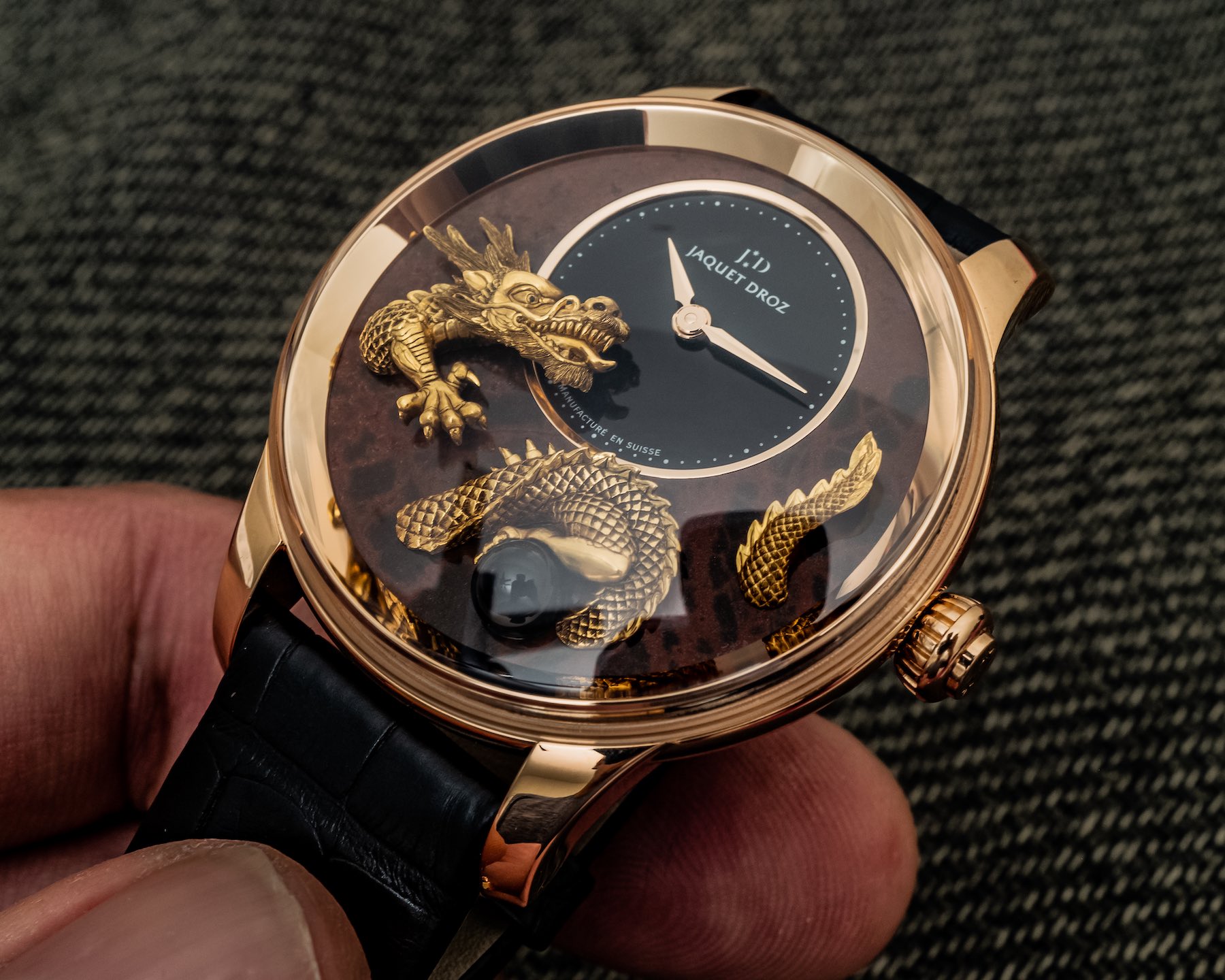 Admittedly, I couldn’t visually identify the material comprising most of the dial that the dragon is weaving in and out. It makes sense as “Spiderman” Jasper is a variant of the gemstone that I don’t believe I’ve seen before, though the “web-like mineral veining” makes for a rich and moody backdrop (the color lies somewhere between brown, ochre, and burgundy) that feels wholly appropriate here. Naturally, the stone is cut, softened, and polished by hand. 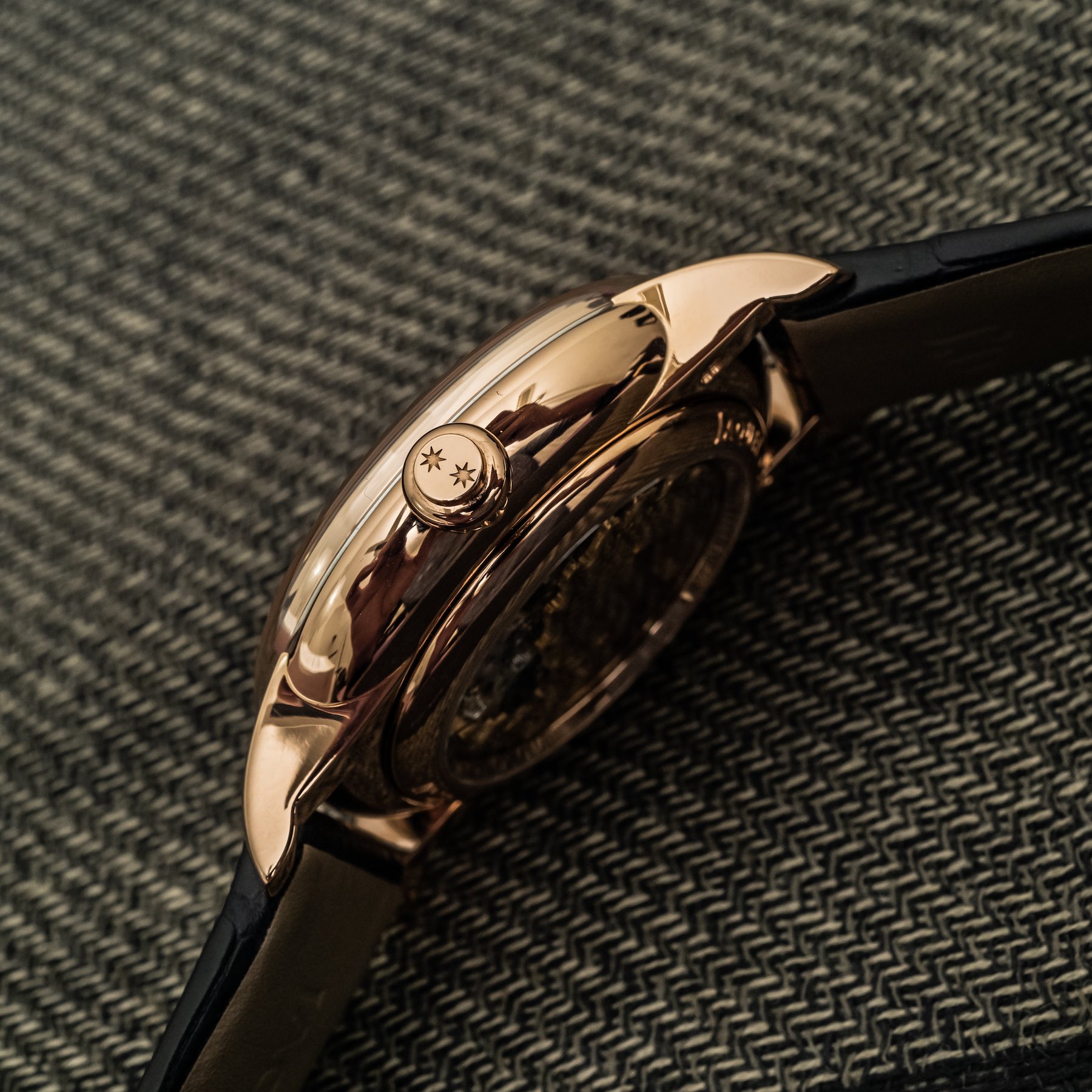 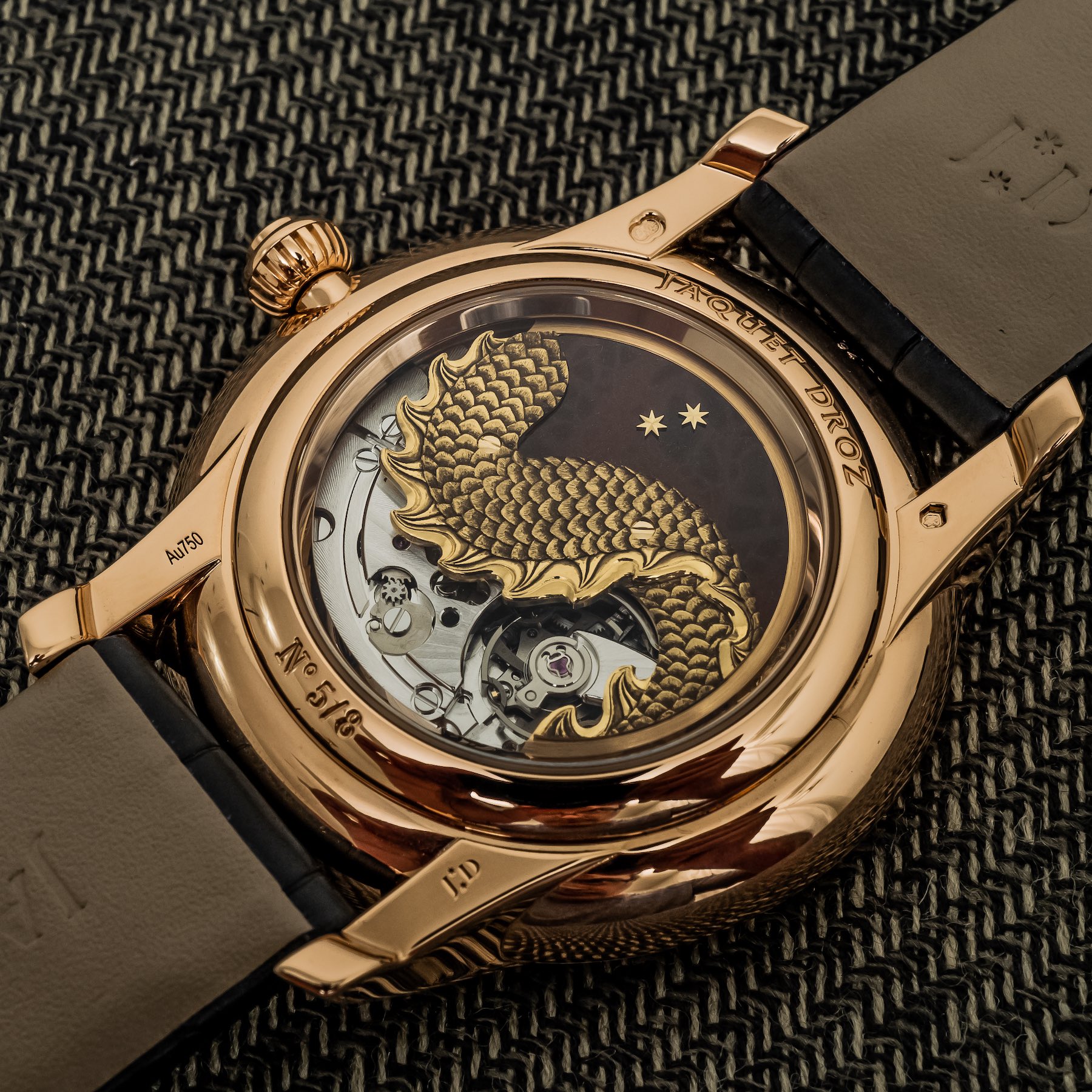 The Jaquet Droz Petite Heure Minute Relief Dragon case is done in 18k red gold and measures 41mm-wide and 13.77mm-thick with a water resistance of 30M. Turning the case over reveals the 2653.Si movement, which we’ve seen in some Jaquet Droz Petite Heure Minute pieces, as well as the Loving Butterfly Automaton (though that had added modules for the automaton portion). This automatic movement has a silicon balance spring and pallet lugs. With 28 jewels, the Jaquet Droz 2653.Si operates at 28,800 vph and has a 68-hour power reserve.

Technical details aside, the centerpiece of the movement is the rotor, which carries the dial design over to the case back. Done using Spiderman Jasper and yellow gold for the dragon, the rotor ties everything together here. The quality of the shading done on the scales is really quite intricate, which is even more impressive in the metal when considering it’s all done by hand. 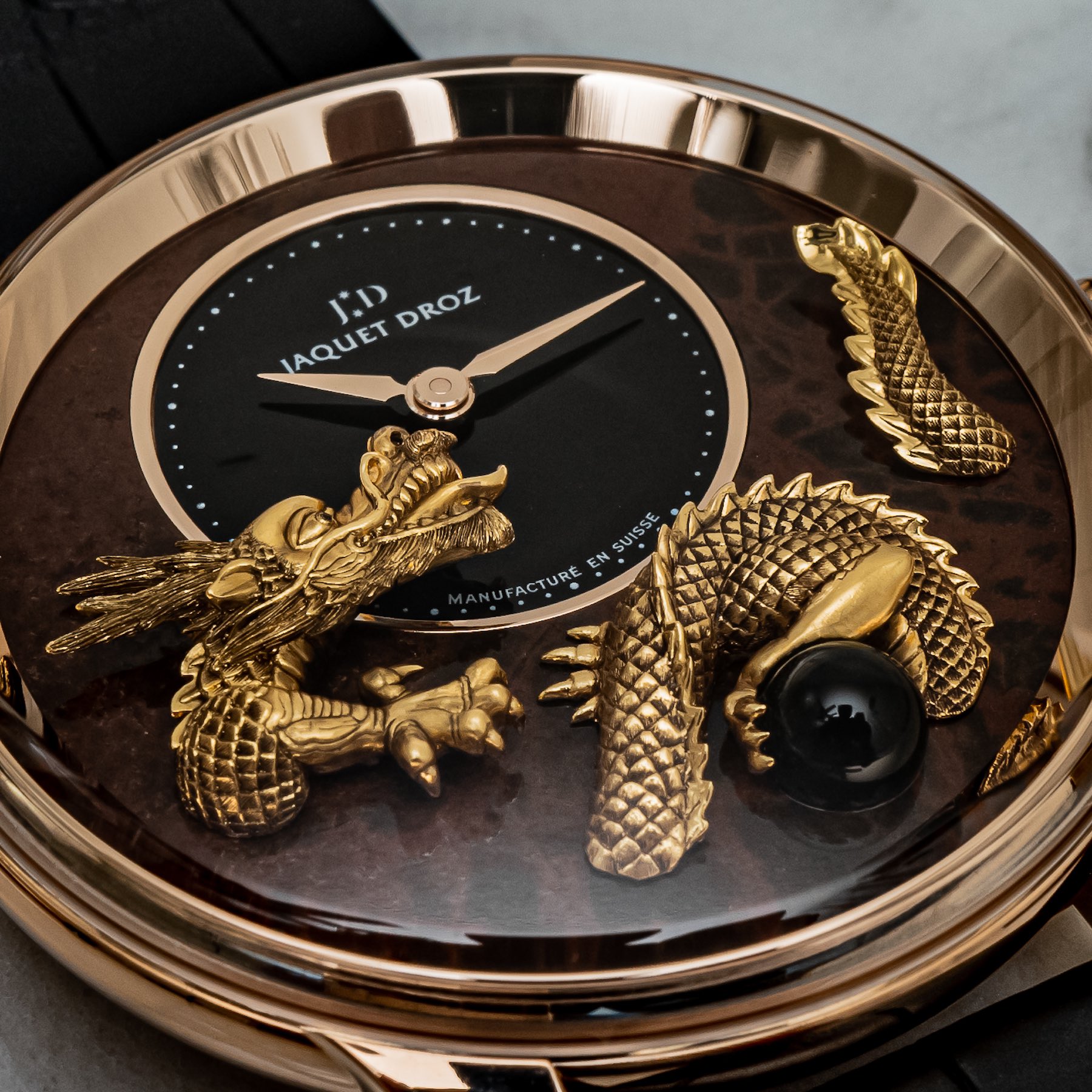 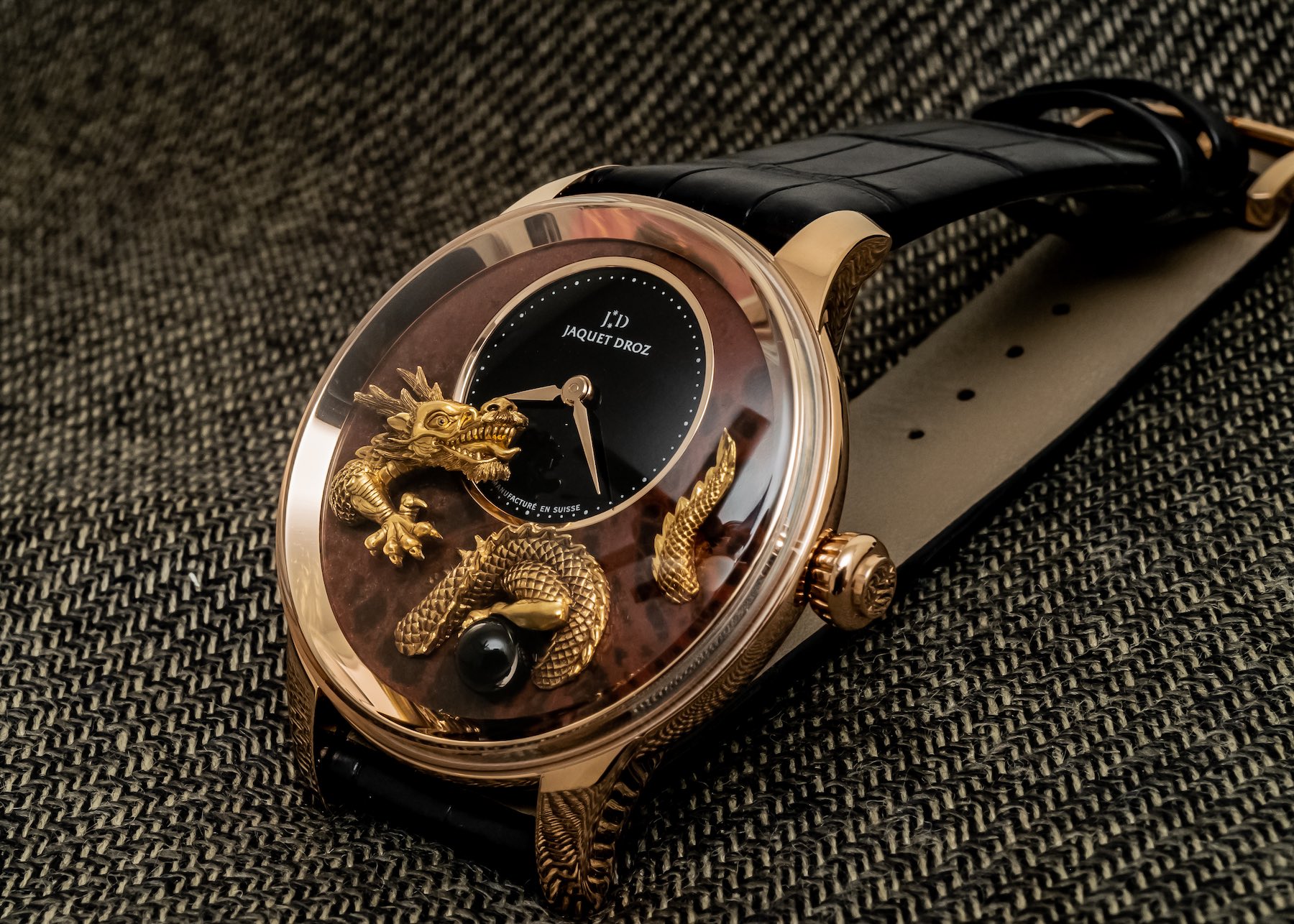 The Jaquet Droz Petite Heure Minute Relief Dragon is a special piece for a very specific kind of collector who appreciates the intricate work done at the Ateliers d’Art, and it’s actually considerably less expensive than the multi-six-figure automaton pieces the brand offers. Limited to eight pieces, the Petite Heure Minute Relief Dragon is priced at $74,300. You can learn more at jaquet-droz.com.