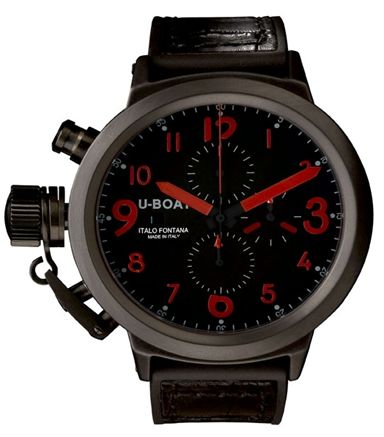 Like many celebrities Sylvester Stallone is a big watch lover. Unlike others he is attributed with making a brand popular in Hollywood (Panerai), and working closely with watch companies. Accordingly, Panerai has even released models with the “Slytech” name in honor of Stallone for his love and participation with the company. Stallone love’s Panerai so much, he even proudly wears them in some of his movies most recently Rambo 4. See what watch Stallone wore in Rambo here.

Not to be a one watch brand man, Stallone has a fondness for big watches. A recent company that has interested Stallone is U-Boat, an Italian designer producing well made watches with distinct retro-military-nautical themes. Some might consider these watches “over-size,” others think they are just right. See the video below of Stallone testing a few new U-Boat watches (to what I am sure must be to Panerai’s dissatisfaction with their smaller, large watches at 44-46mm).

I love Stallone’s remarks about Arnold Schwarzenegger in the clip. “Arnold is up to 60, I get a 55 and Arnold has to get a 60.” Of course he is talking about the diameter of the watch face. 55 is really big, and 60mm, is well bigger. Regardless of the fact that large watches are in, there are more reasons to get one beyond trend conformity. Large watches make a bigger statement, are easier to read, and provide much more room for interesting complications or design themes. In order to compensate for their size, U-Boat watches place their crowns and chronograph pushers on the left side so that they don’t dig in to one’s wrist and are less prone to snag or get damaged. This is becoming more and more popular with large or activity orientated watches. 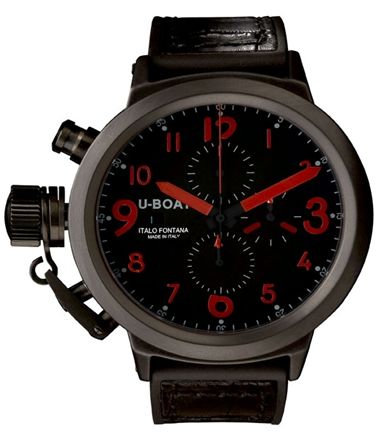 Be it known that Stallone is not particularly tall. He is a well-built guy, but he and Schwarzenegger both wold not be considered particularly tall. I mention this to impress upon you that you don’t need to be a massive person to pull off the large watch look.

U-Boat has been releasing some impressive watches as of late. I have been taking more notice of them, and like where they are going. The sizes range from as low to 45mm and up to 55mm (likely more soon). While you can get watches in steel and gold, they now offer large ceramic cases on the Flightdeck models. Both the gold and ceramic models shown are 55mm and Flightdeck models, but another model U-Boat offer that I like a lot is the “Thousands Of Feet.” I’ll likely cover that more at a later time. Inside are all Swiss automatic movements. The configuration looks like a Valjoux 7750, but the size of the watches would suggest use of the new ETA Valgranges movement which offers the same features as the Valjoux 7750, but is larger. Speaking of chronographs, you’ll notice the large screw cap on the crown connected via a little clasp to the bottom side of the watch. This is a bit of a vestigial element on the watch, but is meant to assist with water resistance. It used to be that one method of ensuring a water-tight case was to seal in the crown. Since then, other effective means have come out, like crowns that themselves screw in, or tighter gaskets that don’t allow water in at high pressures. If you want to adjust the crown on this watch, you unscrew the cap, it dangles on the little hinge so that it does not get lost, and a smaller crown is revealed underneath.

U-Boat watches are pretty sturdy, and have a nice feel for such watches. They are undoubtedly the highest quality watches to display this theme, though they are not the only watches that combine retro military looks and with submarine conventions.

Stallone may have found a worthy compliment to his vast Panerai collection. I love seeing his reactions to watches and what he may pick up next. I wonder what an entire line of Rambo watches would look like. That is one way into relative movie retirement mode for Mr. Stallone if he is still wants something fun to do.