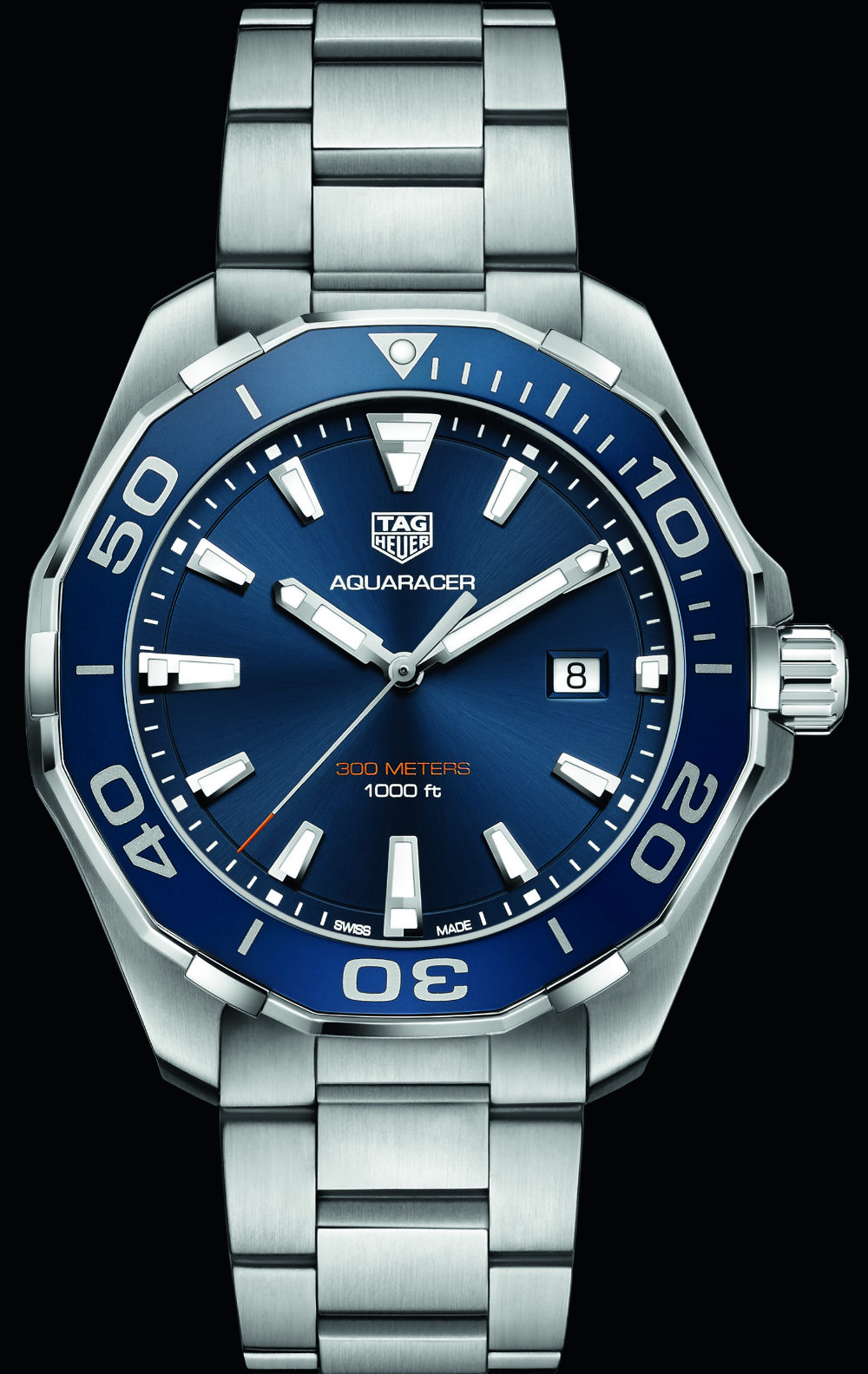 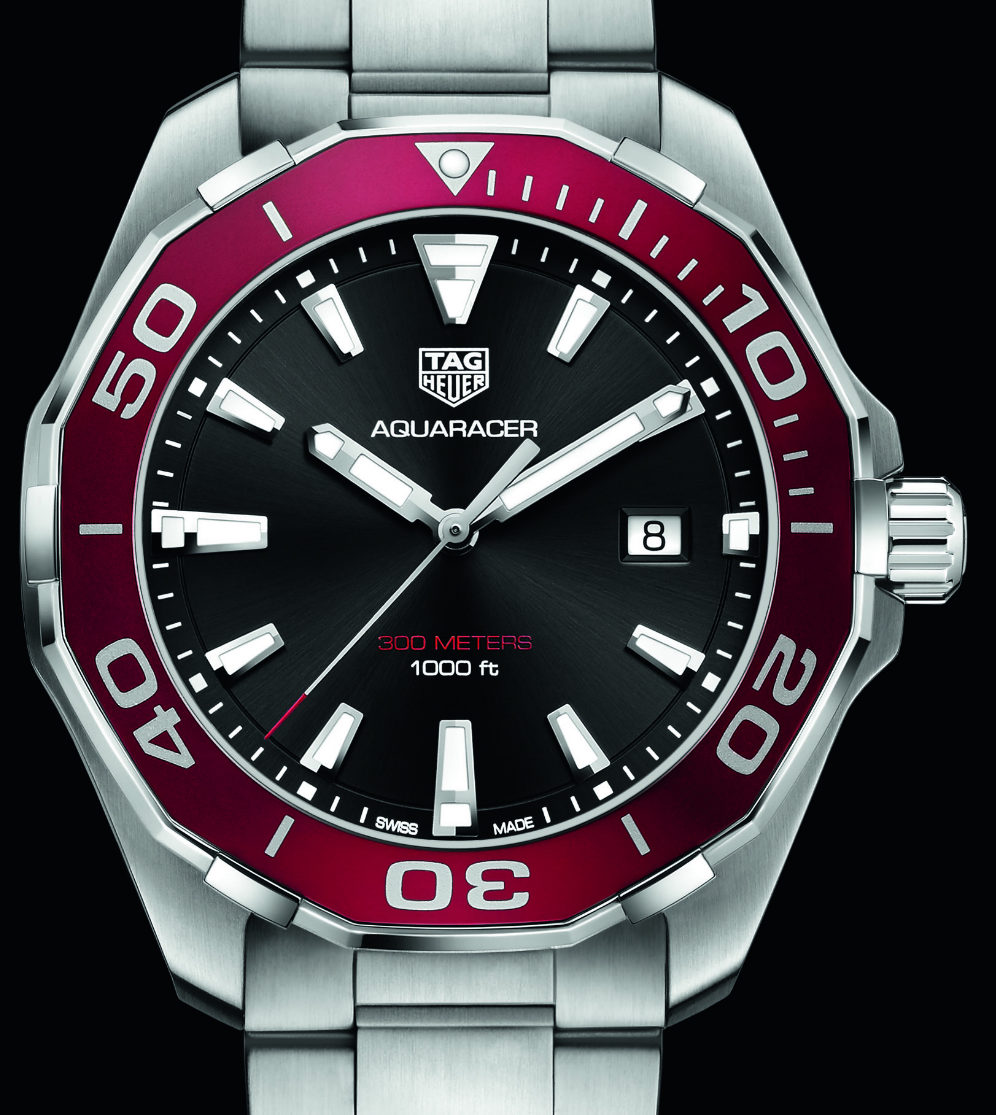 While the headlines at SIHH 2017 are more or less dominated by incredible complications and equally incredible price tags, it’s nice – almost refreshing – to find that some brands like TAG Heuer haven’t totally abandoned accessibility and are still committed to producing a quality “gateway drug” into watches. And while that drug may differ for nearly every type of watch collector out there, it’s safe to say that there are still a good many of them whose first “nice Swiss watch” is powered by the approachability and simplicity of a quartz movement. For this latter group of watch fans (or anyone chasing the convenience of an attractive, well-made “grab-and-go” watch), TAG Heuer continues to support its popular and economical quartz line by introducing some exclusive color treatments and a 43mm case to its perennially capable Aquaracer line.

It’s worth noting that if we go all the way back to the humble origins of TAG Heuer’s signature dive watch, remember that its debut in 1982 wasn’t powered by an automatic movement, but a quartz one. And ever since, TAG has been consistently offering quartz options within the collection, even while other luxury brands like Omega quietly phase out much of the variety of their own quartz selections. TAG’s commitment has been admirable, but it also serves as a proof point that not only is there still demand, there’s enough demand to warrant growing the TAG Heuer Aquaracer 300m quartz collection from its single 41mm offering to a trio of 43mm offerings that more closely mimic the design language found on the line’s premium selections (in the past, the quartz and automatic variants were given dramatically different design executions). 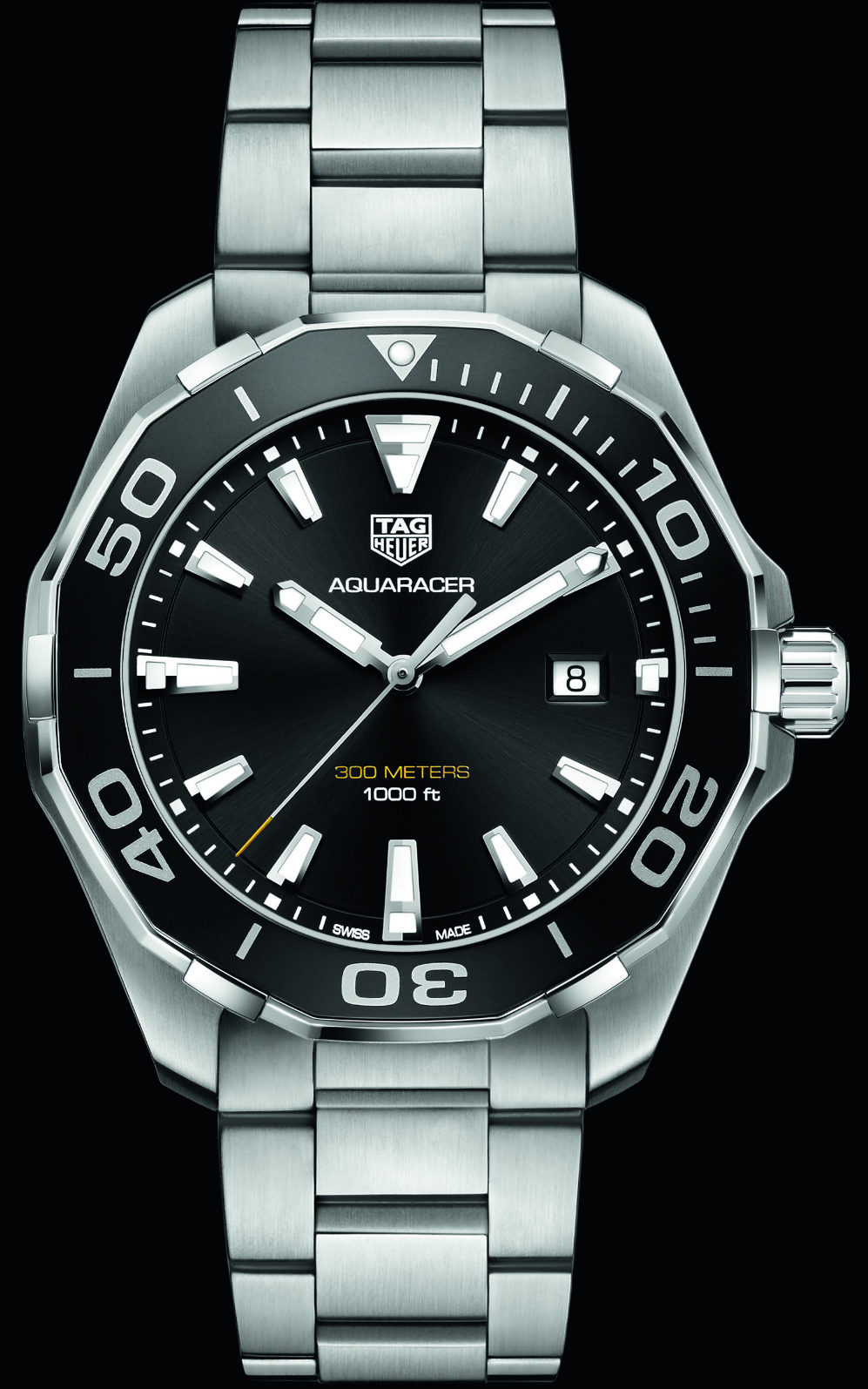 Speaking of premium, the automatic TAG Heuer Caliber 5 Aquaracer 300 starts at around $2,400. So to bring the price down well below the $2k mark, TAG Heuer had to do more than just swap out the movement – for this iteration, the bezel is now anodized aluminum (instead of ceramic) in either black, or cheerful hues of red or blue. The magnifying cyclops is also omitted from the crystal, and the dial loses its luminous seconds hand and textured “shutters” in favor of a clean sunburst effect. The end result is undoubtedly much cleaner and simpler, yet still faithful to the Aquaracer collection’s DNA through the preservation of the bold handset and applied indices, screw-down caseback with diver’s helmet engraving, and the six grippy studs on the bezel – all of which have become semi-permanent hallmarks of the collection. 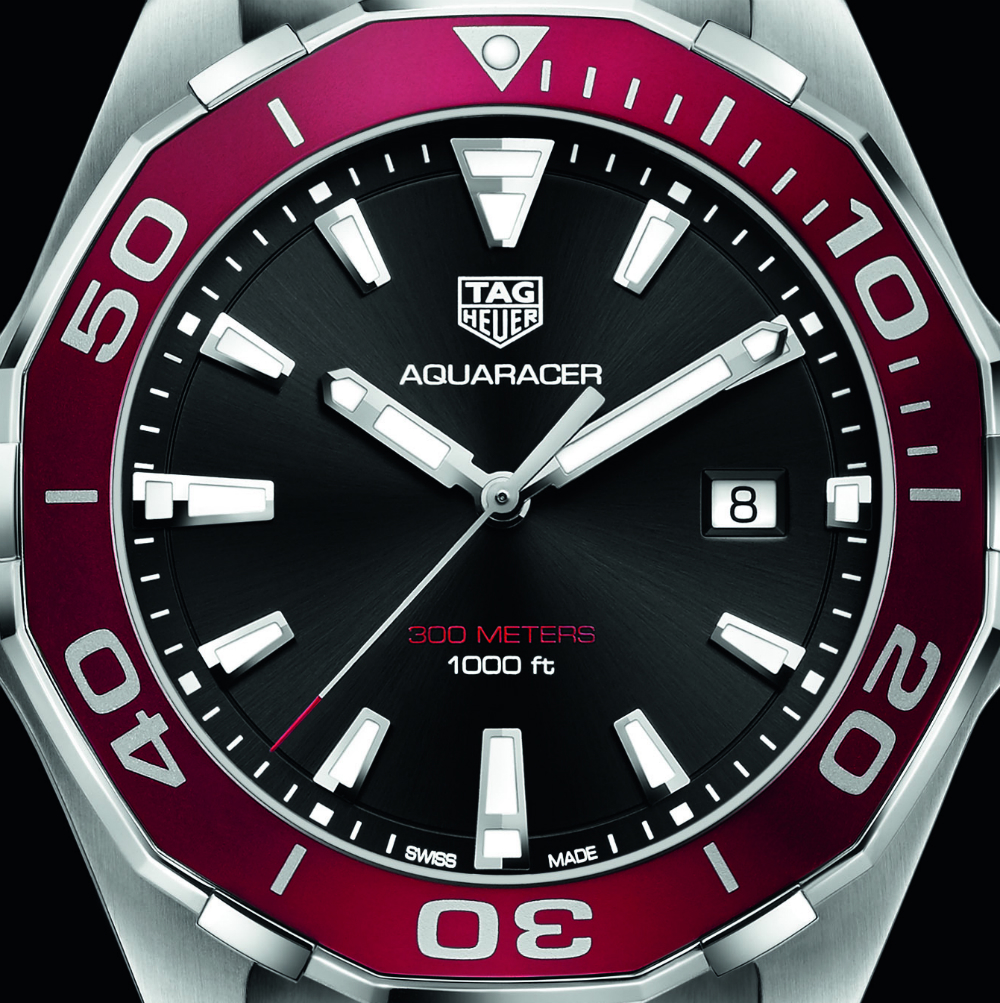 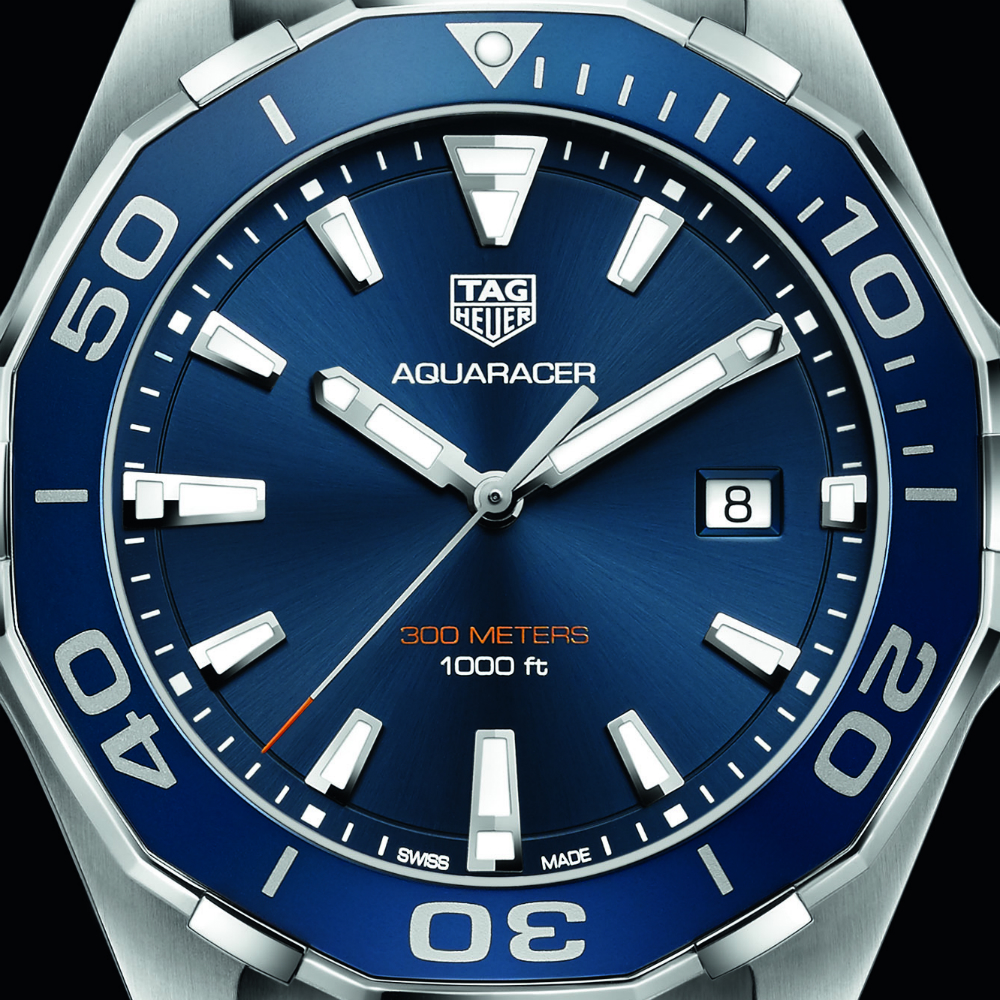 Now, though we obviously have yet to crack one of these Aquaracers open, we’d wager that TAG is sticking with the Ronda 6003 movement that it’s been using for the past few years in this collection. Granted, the 6003 is a far cry from a Grand Seiko 9F, but it’s still a repairable, gold-plated movement with four jewels that should provide its owner with a lifetime of reliable, worry-free wear, with around 40 months between battery changes. 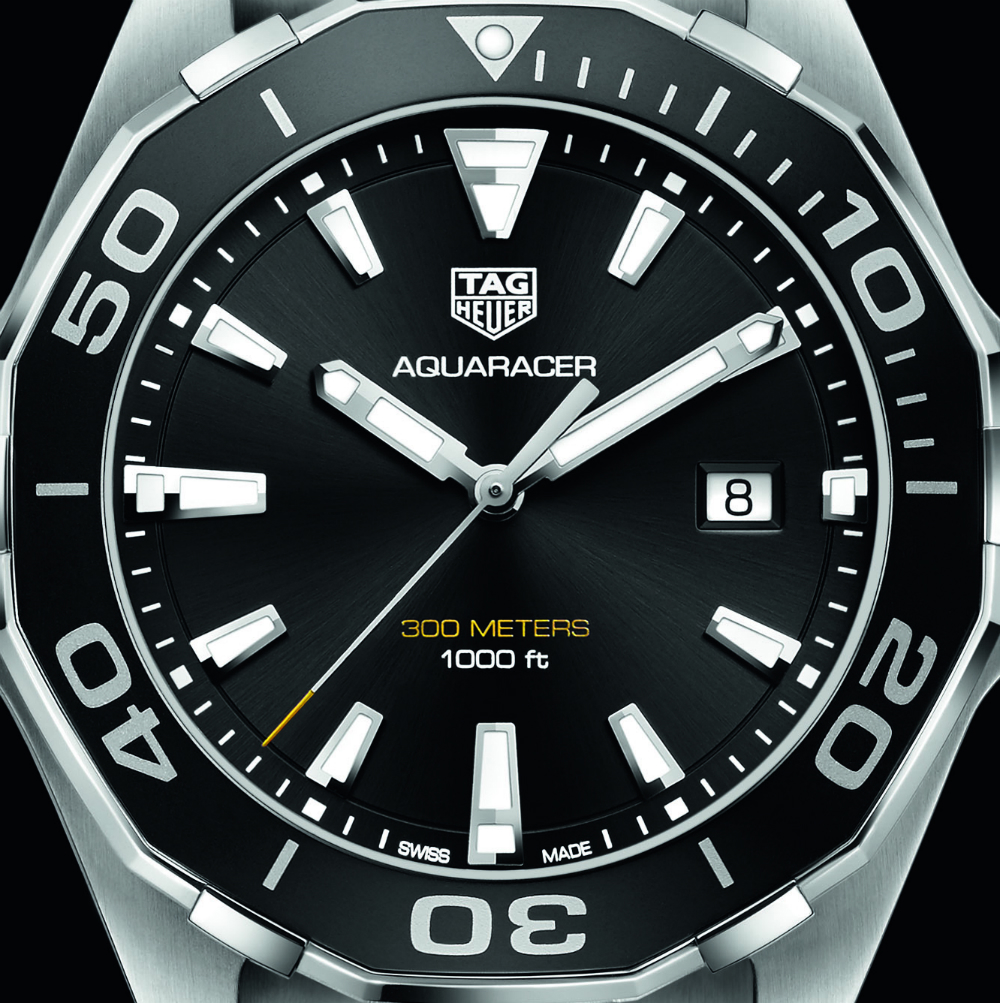 As with many brand-new releases, pricing has yet to be officially confirmed, though we’d wager the price for the 43mm TAG Heuer Aquaracer 300m Quartz should be somewhere in the neighborhood of its 41mm companion currently available, which starts at $1,600. It’ll be available in three variants: red (ref. WAY101B.BA0746), blue (WAY101C.BA0746), and black (WAY101A.BA0746). tagheuer.com