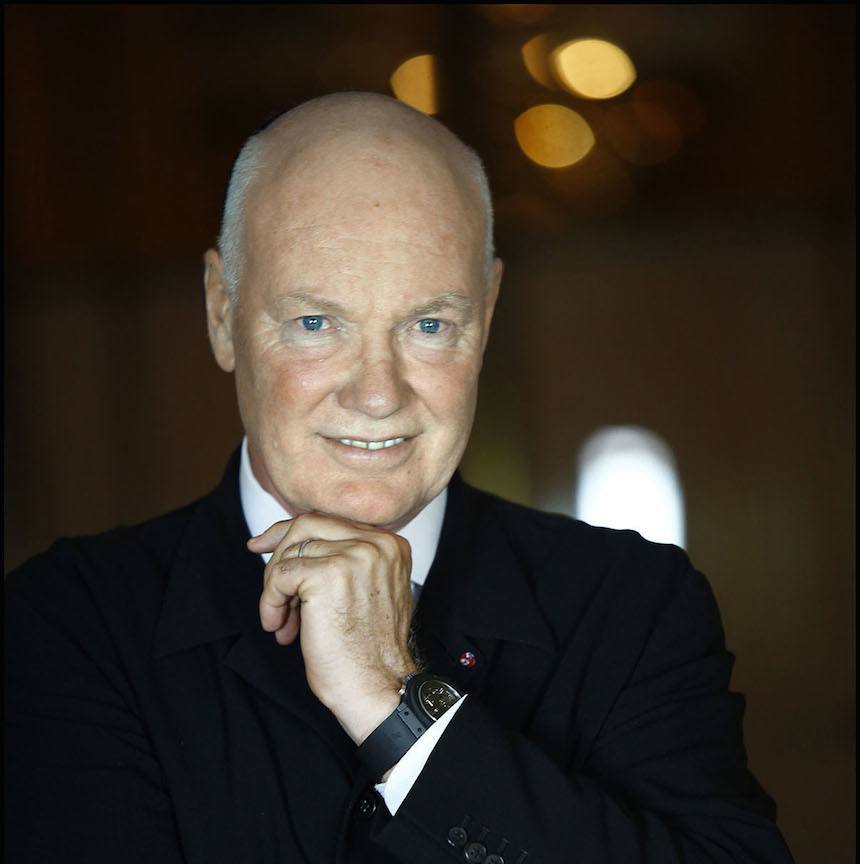 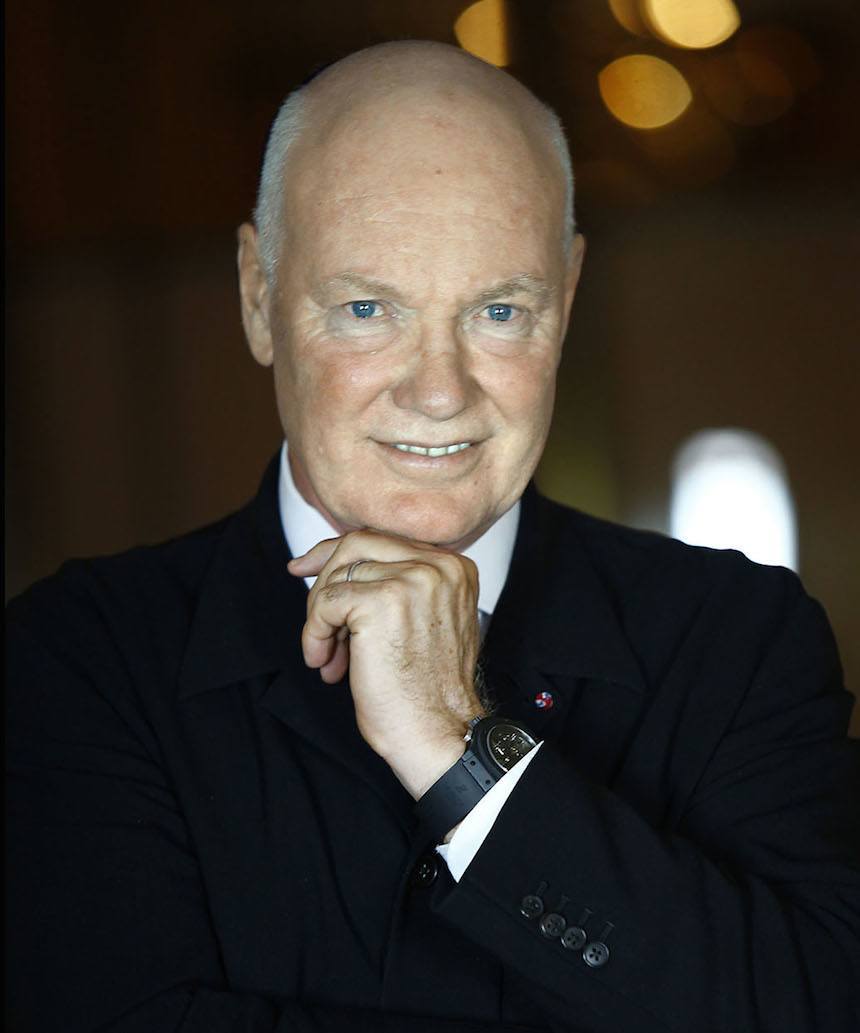 One of the world’s most popular luxury watch brands is TAG Heuer, whose recent history has been a bit tumultuous. A few days ago, TAG Heuer CEO Stephane Linder stepped down after being in the role for only about a year. Linder had replaced long time TAG Heuer CEO Jean-Christophe Babin, who amicably left to move to another company in the LVMH group – as Bulgari’s new CEO. News of Stephane Linder’s departure was accompanied with the announcement that watch industry legend Jean-Claude Biver would take his place as the interim CEO of TAG Heuer. 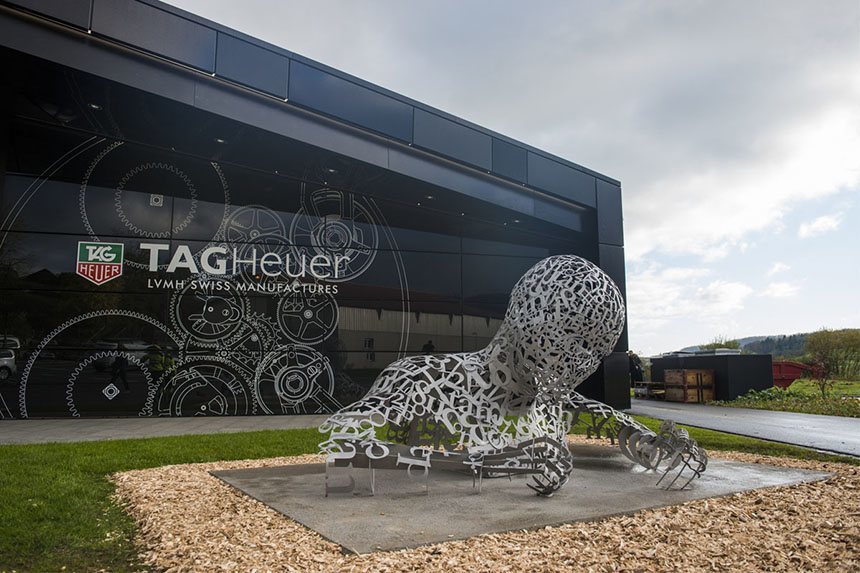 Jean-Claude Biver first gained fame working at Omega, and then the watch brand Blancpain – the latter company, he sold for a hefty sum to the Swatch Group. Jean-Claude Biver then purchased the ailing brand Hublot and brought it back from the brink of bankruptcy in the mid 2000s. A few years ago, Jean-Claude Biver sold Hublot to LVMH for over 300 million Euros. He remained the CEO of Hublot for a while before handing over the reigns to Ricardo Guadalupe. Jean-Claude Biver remained the Chairman of Hublot, and more recently acquired a new role heading the watch division of LVMH that more-or-less includes overseeing Hublot, Zenith, and TAG Heuer (though LVMH owns other companies that produce watches, according to Jean-Claude Biver, the group considers them to be more “jewelry,” such as Bulgari). 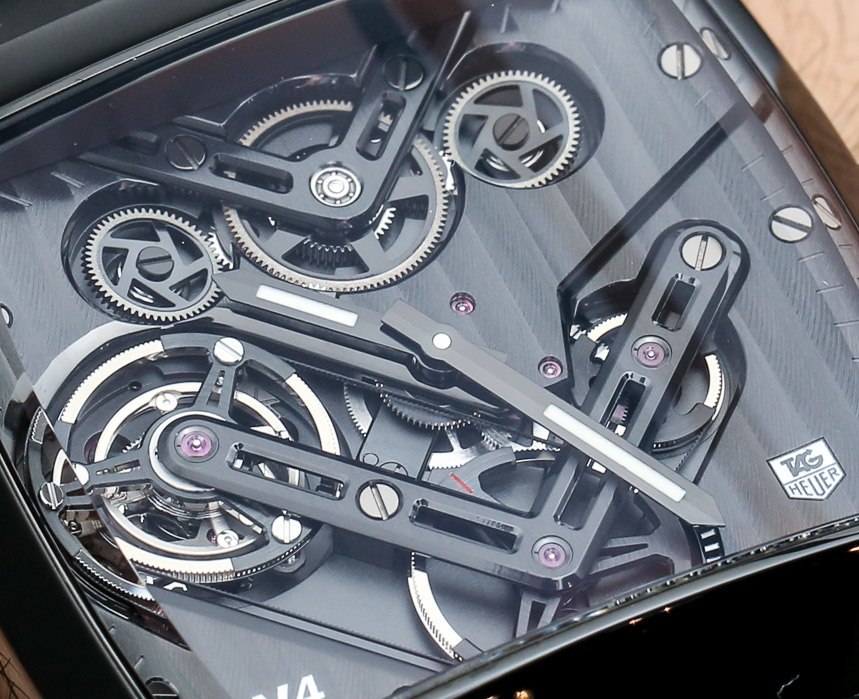 One of Tag Heuer’s ventures into “haute horlogerie” territory: the Monaco V4 Tourbillon that uses belts in the movement

In October of 2014, TAG Heuer was reported to be laying off employees and potentially reorganizing. One major “cut” was the production of their also recently announced in-house made and designed Calibre CH80 Automatic Chronograph movement. Speaking personally with Jean-Claude Biver after the news, he explained more-or-less what was going on with TAG Heuer – it was time to get back to its roots. Over the last decade or so, TAG Heuer had attempted to climb from a brand selling $1,000 – $3,000 watches to a brand selling $3,000 – $5,000 watches, and later a brand also selling $5,000 – $8,000 watches.

More so, TAG Heuer has a division dedicated to producing “haute horlogerie” ultra-high-end watches, such as the Monaco V4 Tourbillon, and a host of exotic ultra precise chronographs. While cool, according to Jean-Claude Biver, TAG Heuer was losing its path, and suffering as a result. While dropping most of the ultra high-end manufacturing of the brand, TAG Heuer is known to be working on a smart watch that will be released sometime during 2016 – which will definitely be big news as TAG is the only major fine Swiss watch manufacturer that is known to be working on such a release (although there surely are others secretly also working on their solutions).

LVMH also needed an entry-level brand – something that TAG Heuer was historically very adept at filling. Rumors abounded that Jean-Claude Biver and Stephane Linder ran into some disputes over the changes at TAG Heuer. Linder was a sales leader for the company in the US before being asked to return to Switzerland to be CEO. Jean-Claude Biver was the man in charge. No doubt the changes at the company were difficult, but I agree with Mr. Biver that, while TAG Heuer produced some extremely cool stuff, it was losing what it was best at. There was also too much internal competition now between TAG Heuer and Zenith. Speaking of Zenith, Jean-Claude Biver has mentioned his intent for the company to focus once again on El Primero movement based sport watches. 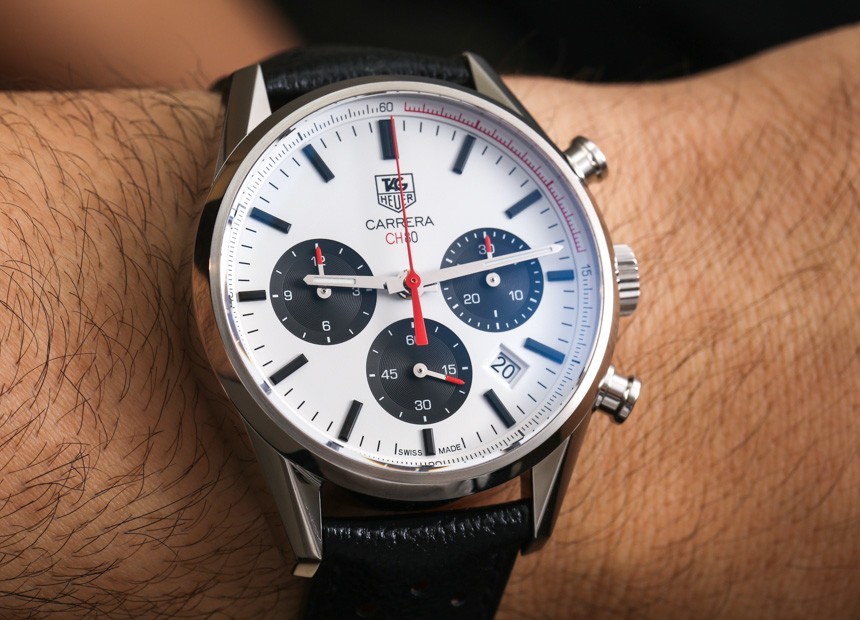 The beautiful – and short-lived – Carrera CH80, one of the casualties of TAG Heuer’s recent repositioning

Stephane Linder’s removal as CEO from TAG Heuer is, I believe, linked to the changes at the company. I further believe that Jean-Claude Biver is stepping in as interim CEO because there is no one else for the job right now, and because TAG Heuer needs the “Biver touch.” Biver was more-or-less in charge of the company from a top level anyways, given his larger role at LVMH, so it makes sense for him to be in charge of the brand for a while – ideally, for him, a short while. For several years now, it has been known that Jean-Claude Biver has wanted to work less and some have even discussed his wishes to retire. He can certainly afford it, but Jean-Claude is a bit of a fellow workaholic and I understand his personal desire to “fix” TAG Heuer. Speaking to Jean-Claude again about TAG Heuer and his new role as interim CEO, he had the following interesting things to say:

Ariel Adams: You’ve just taken the role as interim CEO of TAG Heuer, based on your larger position heading strategy for watches at LVMH. Did you anticipate the former CEO Stephane Linder’s departure? What do you intend on doing during your time as CEO?

Jean-Claude Biver: I have already contributed to reorganizing a few brands such as Blancpain, Omega, and lately, Hublot. Each time, I try first to learn, listen from the management before making any decisions. I also try always to help the management and to make any effort in order to maintain as much as possible the existing management. I have done exactly the same this time, and therefore, did not anticipate any departure of anybody. Now that I have taken the position as interim CEO, I will pursue the implementation of the new policy, which is to concentrate all our efforts on our strong and historical price segment, which is the segment between $1,500 to $5,000. 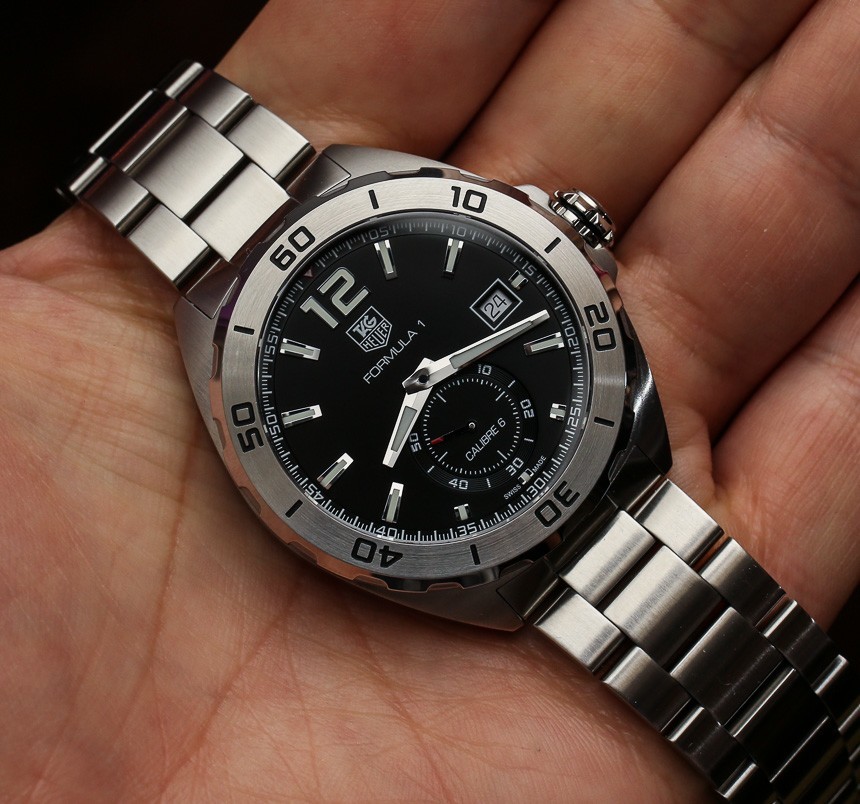 The new TAG Heuer Formula 1 Calibre 6 Automatic in brushed steel is priced at $1,800 – considerably more affordable than the average price point recently seen from the brand

Ariel Adams: In the last year, you’ve helped TAG Heuer change their direction by refocusing the product strategy of the company, and helping them realign with their more traditional focus on appealing to a large customer base with more accessible prices. In searching for a new full-time CEO, what type of qualities should they have? What types of activities do you want them to focus on for the next few years at TAG Heuer?

Jean-Claude Biver: For the time being, I am now looking for a new CEO, and should we have one in a few months, I will want to promote somebody who is already a member of our actual management team at TAG Heuer.

Ariel Adams: There has been talk that LVMH, like other major luxury groups, are reorganizing their marketing and product development efforts in light of the slowdown in China, and the reality that brands need to focus more on a “world market” and, once again, on the West. How have these changes affected the internal culture at TAG Heuer? What role will TAG Heuer play in LVMH’s larger watch brand portfolio over the next few years?

Jean-Claude Biver: Contrary to other Swiss Watch brands, TAG Heuer has never been very much dependent on the Chinese market. That’s the reason why the Chinese slowdown has not had any important impact on our sales. TAG Heuer will be the leading watch brand at LVMH, the same as it has been since LVMH bought the company at the end of the 1990s. 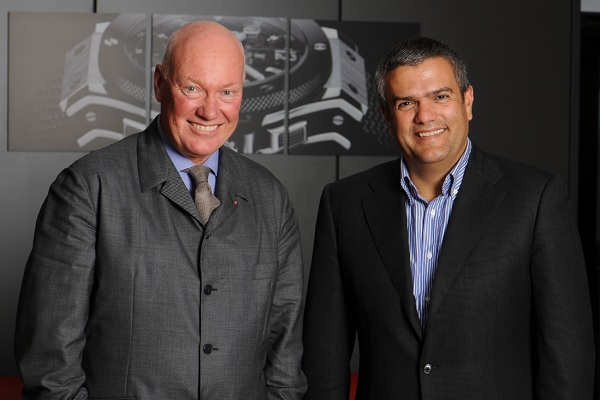 Jean-Claude Biver (left) with Ricardo Guadalupe, his replacement in the CEO position at Hublot

Ariel Adams: TAG Heuer has traditionally been considered an excellent entry-level and mid-tier luxury watch brand – with, of course, a heavy emphasis on a sporting lifestyle. What will you do in the coming months to further strengthen and reinforce this position for the brand?

Jean-Claude Biver: We will follow and pursue this politic and positioning of the brand. We will try to attract even more than before the young generation and young customers. Also, thanks not only to avant garde and attractive products, but also together with new ambassadors coming not only from the sports world, but also from lifestyle or the music world.

Ariel Adams: How long do you intend on being the interim CEO of TAG Heuer? What personal strategy will you use to focus on these new duties while still monitoring other LVMH brands such as Hublot and Zenith?

Jean-Claude Biver: I don’t know how long I am going to stay, but I am ready to stay for at least 18 months. I want to implement, first, our new positioning and new message with my team, and then, we will see. I have no problem to also monitor Hublot (which I know quite well) and Zenith (where I have one of my best friends as CEO). tagheuer.com