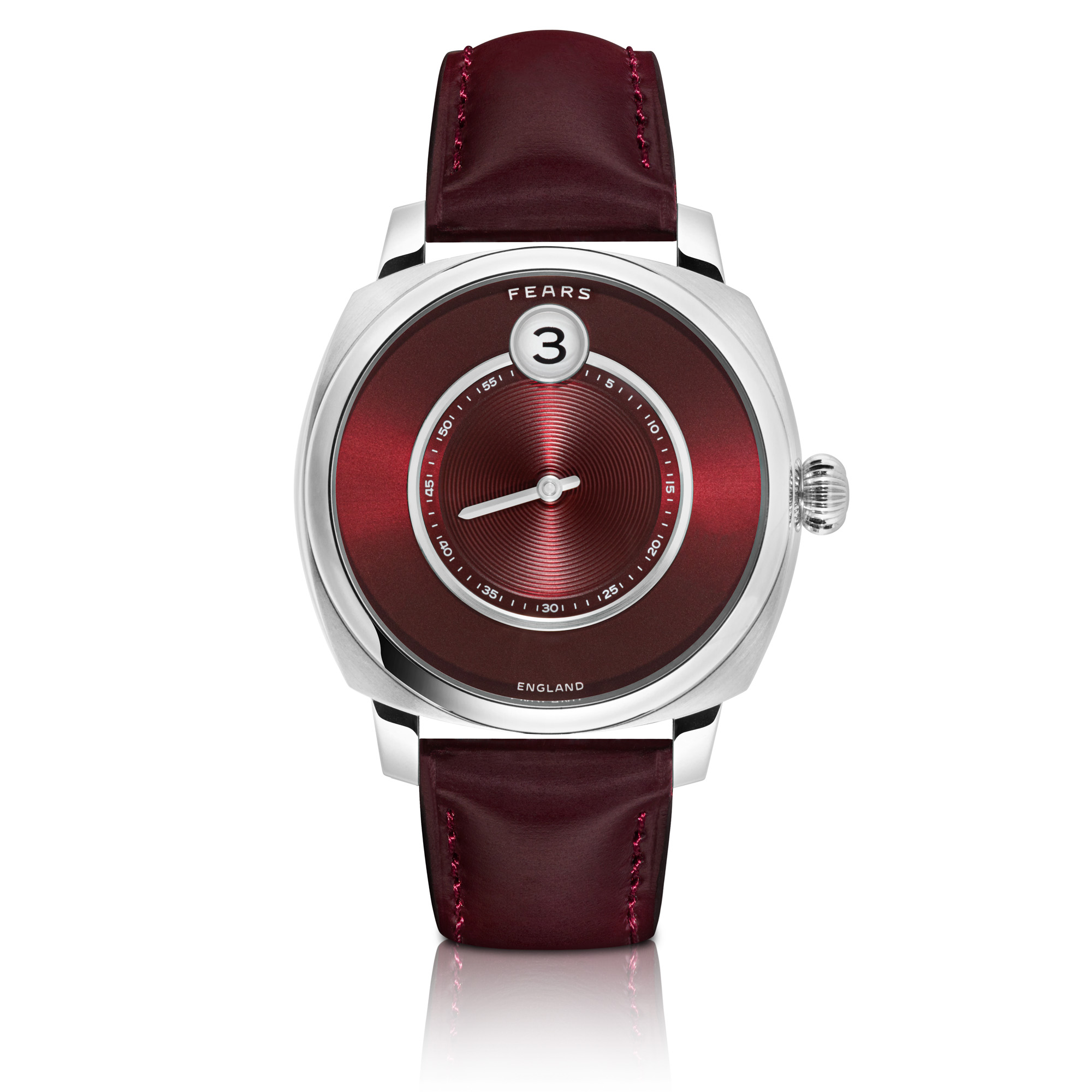 Ever since it was officially founded in 2020, the Alliance of British Watch and Clock Makers has had the goal of uniting its various industry members, and forging new partnerships between them. In addition to currently containing 77 different trade members, all of which are British brands operating within the space, the Alliance of British Watch and Clock Makers also offers a club member program. This program is open to anyone, and is intended to raise awareness for British watch and clock production among a wider group of collectors and enthusiasts. Although the organization has only been around for a short while, it is already producing tangible results, and two of its founding members — Fears and Christopher Ward — have teamed up to produce the Alliance’s very first collaboration watch. Officially known as the Fears Christopher Ward: Alliance 01, the new model represents an aesthetic blend of both brand’s unique design languages, and all of the proceeds from the collaboration piece will be donated to the Alliance of British Watch and Clock Makers in order to help fund and support its efforts around the world. 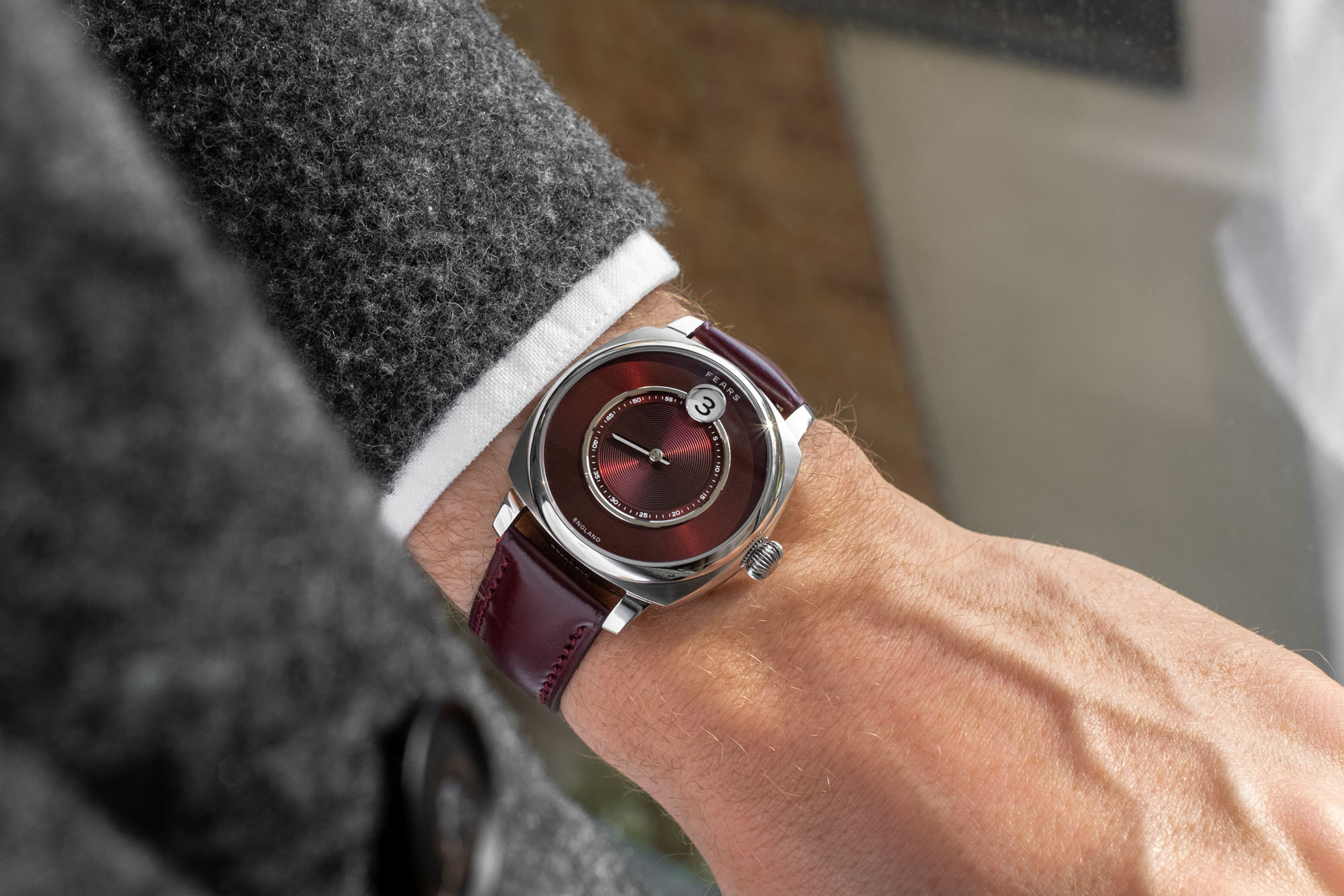 From an aesthetic standpoint, the new Fears Christopher Ward: Alliance 01 very much still has the core DNA of a Fears watch, and this is largely due to the design of its case. Crafted from 316L stainless steel with brushed and polished surfaces, the cushion-shaped case measures 40.5mm diameter by 12.8mm thick (measured to the top of its curved crystal), and it offers an overall profile that will be instantly recognizable to those who are familiar with the Brunswick models from Fears’ contemporary catalog. The underside of the lugs feature small Alliance of British Watch and Clock Makers hallmarks as a subtle way to denote the collaboration, while at the 3 o’clock location sits an onion-shaped winding crown that offers access to the internal movement. The reverse side of the watch gets fitted with a traditional solid caseback, while the top side of the case receives thin domed bezel with a high-polished finish that surrounds a sapphire crystal with anti-reflective treatment on both sides. Fitted to the 20mm lugs is an oxblood red two-piece strap, which is handmade from British calf leather and lined with Alcantara for a comfortable feel on the wrist and a classic overall appearance. 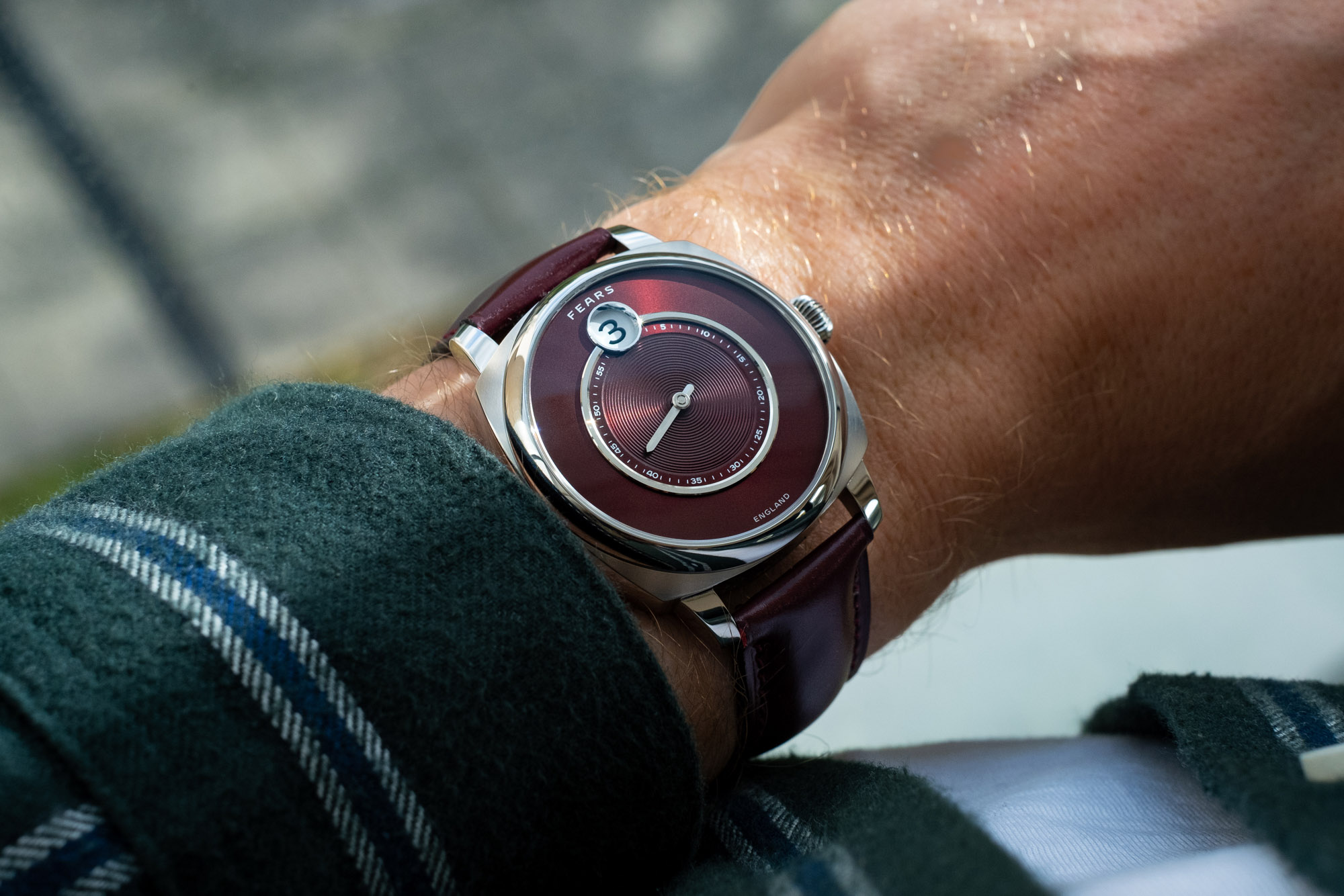 Christopher Ward starts to come into play with the movement that powers the Fears Christopher Ward: Alliance 01 collaboration watch. Rather than being a standard time-only movement with a duo of centrally mounted hands, the 25-jewel Sellita SW200 automatic movement inside the watch is fitted with the JJ01 jumping hour module. The Caliber JJ01 originally appeared inside Christopher Ward’s jumping hours watches, and while the brand currently does not offer a jumping hour model in its lineup, this novel module has made a return to power the new Fears Christopher Ward: Alliance 01 watch. Since the movement itself is based on the Sellita SW200, you get the familiar specs of an operating frequency of 28,800vph (4 Hz) with a power reserve of approximately 38 hours, although the real focus of this movement is its jumping hours display. Rather than having a standard pair of hands to display the hours and minutes, a lone minute hand resides in the center of the dial, while the corresponding hours are displayed by a disc, with the current hour appearing through a window in the dial that automatically jumps to the next value when the minute hand passes midnight. 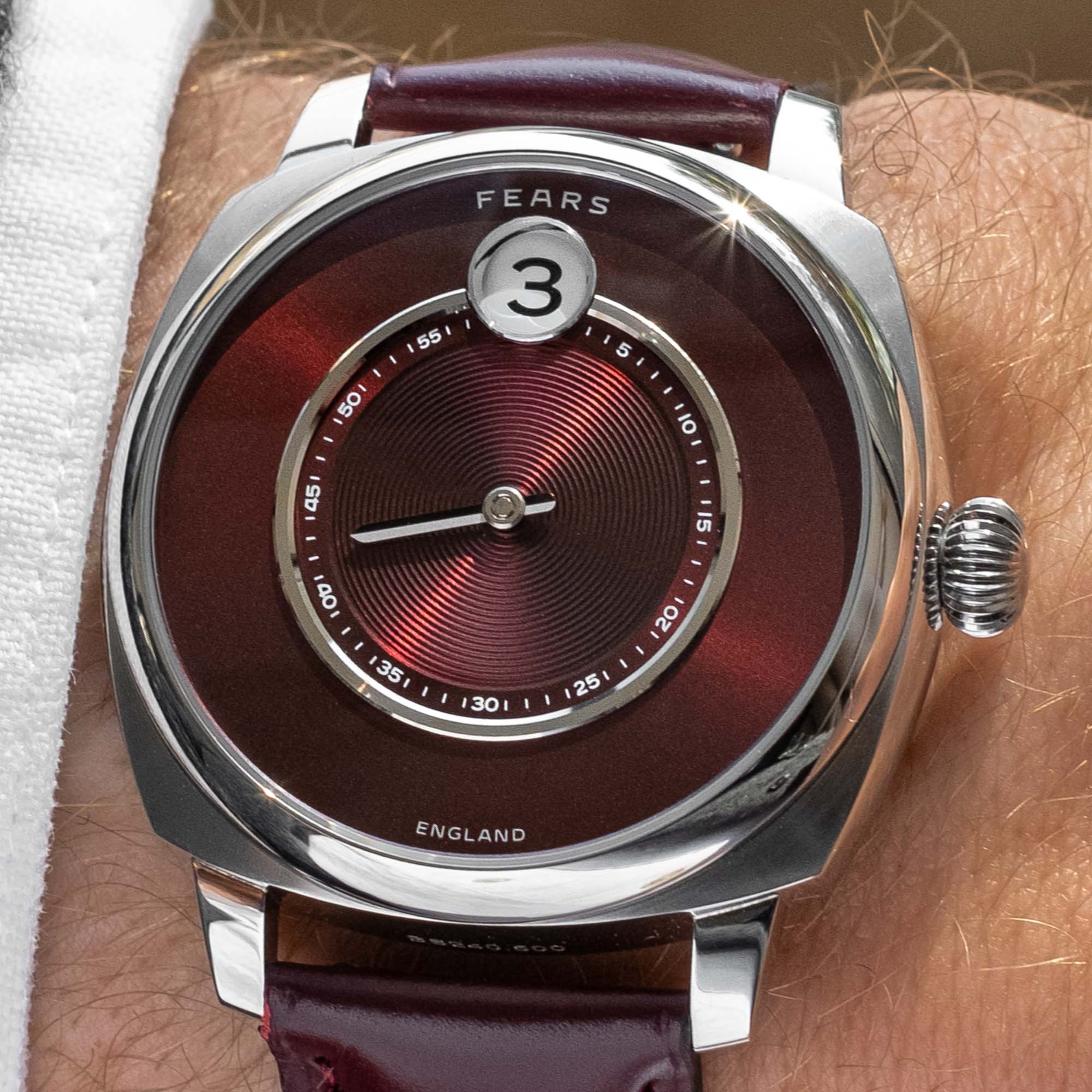 To display the model’s signature jumping hours display, the Fears Christopher Ward: Alliance 01 uses a rich burgundy red dial with a concentric layout to its design. The outer section of the dial features a sunburst finish, while the inner section is adorned with concentric rings engraved into its surface. Separating the two sections is a subtle printed minute track surrounded by a polished rhodium-plated chapter ring that features beveled edges. At the very center of the dial is a rhodium-plated and diamond-polished “Fears” minute hand, while bisecting the two concentric sections at the top of the dial is a circular aperture that displays the current value for the jumping hours mechanism, with the hours disc itself printed in black numerals against a white background. Other than the “Fears” name at 12 o’clock and the word “England” opposite it in small letters at the 6 o’clock location, there isn’t any other text on the dial whatsoever, and the fact that it requires no hour markers enables the watch to offer a very classy and minimalist aesthetic, despite not actually being overtly dressy in its overall design. 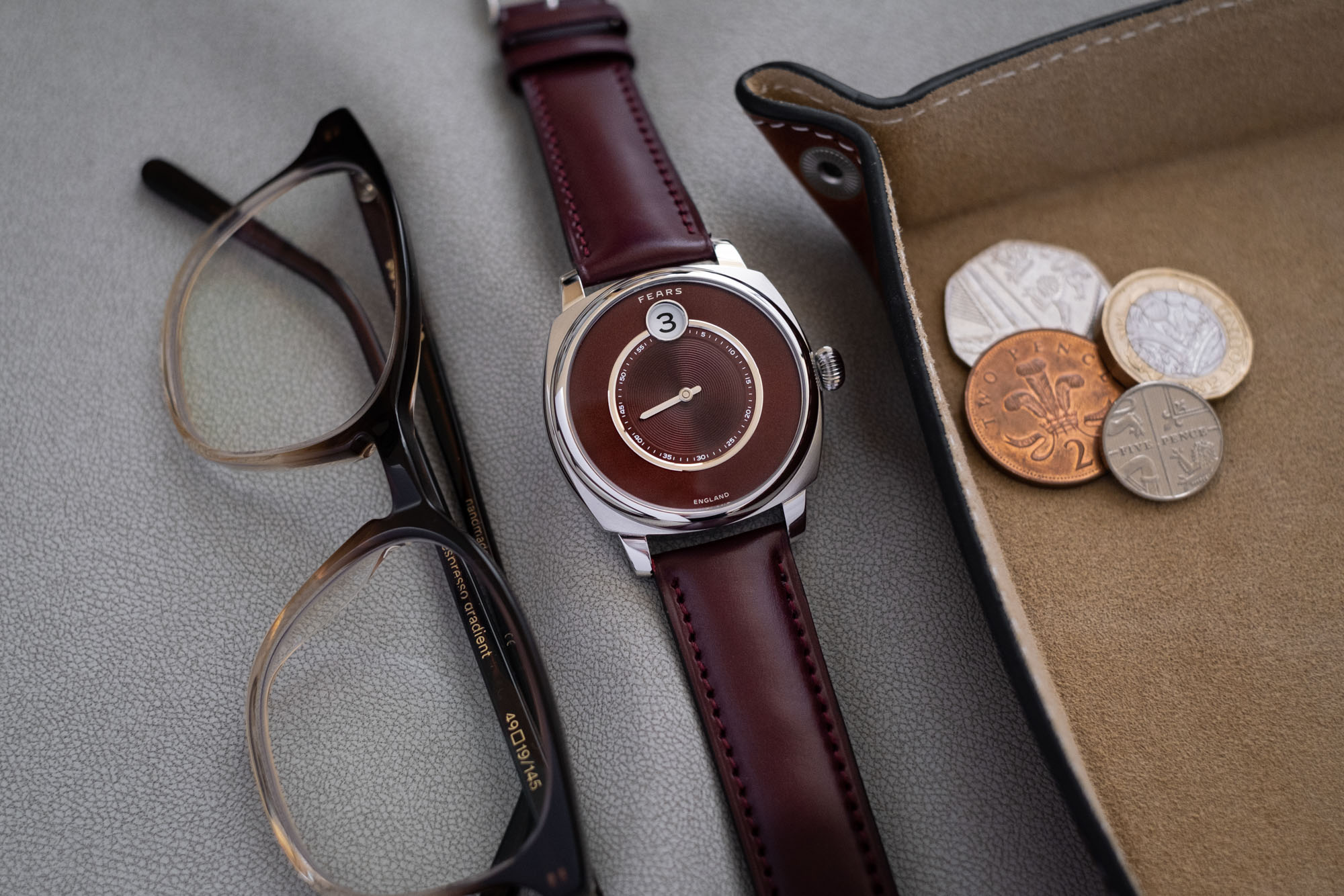 Both Fears and Christopher Ward are known for delivering high quality at fairly reasonable prices, and it is therefore only natural for their collaboration model to adhere to a similar set of principles. With an official retail price of £3,950 including VAT (£3,291.67 ex. VAT), which works out to about $4,000 USD for those of us here in the United States as of press time, the Fears Christopher Ward: Alliance 01 is priced right in line with the rest of Fears’ current catalog and only represents a small premium for its more complicated, jumping-hour movement. With that in mind, not only is the collaboration watch only being produced as a limited edition of just 50 pieces, but it is also only going to be available to Club members of the Alliance of British Watch and Clock Makers — and on a first-come, first-served basis with orders opening on January 27th, 2023. Given that all of the proceeds from the sale of the watches will be donated to the Alliance itself, Club members who purchase the watch can essentially think of it as adding to their collections, while also making a generous donation to their very own organization. For more information on the Fears Christopher Ward: Alliance 01, or to join the Alliance of British Watch and Clock Makers, please visit the Alliance’s website.