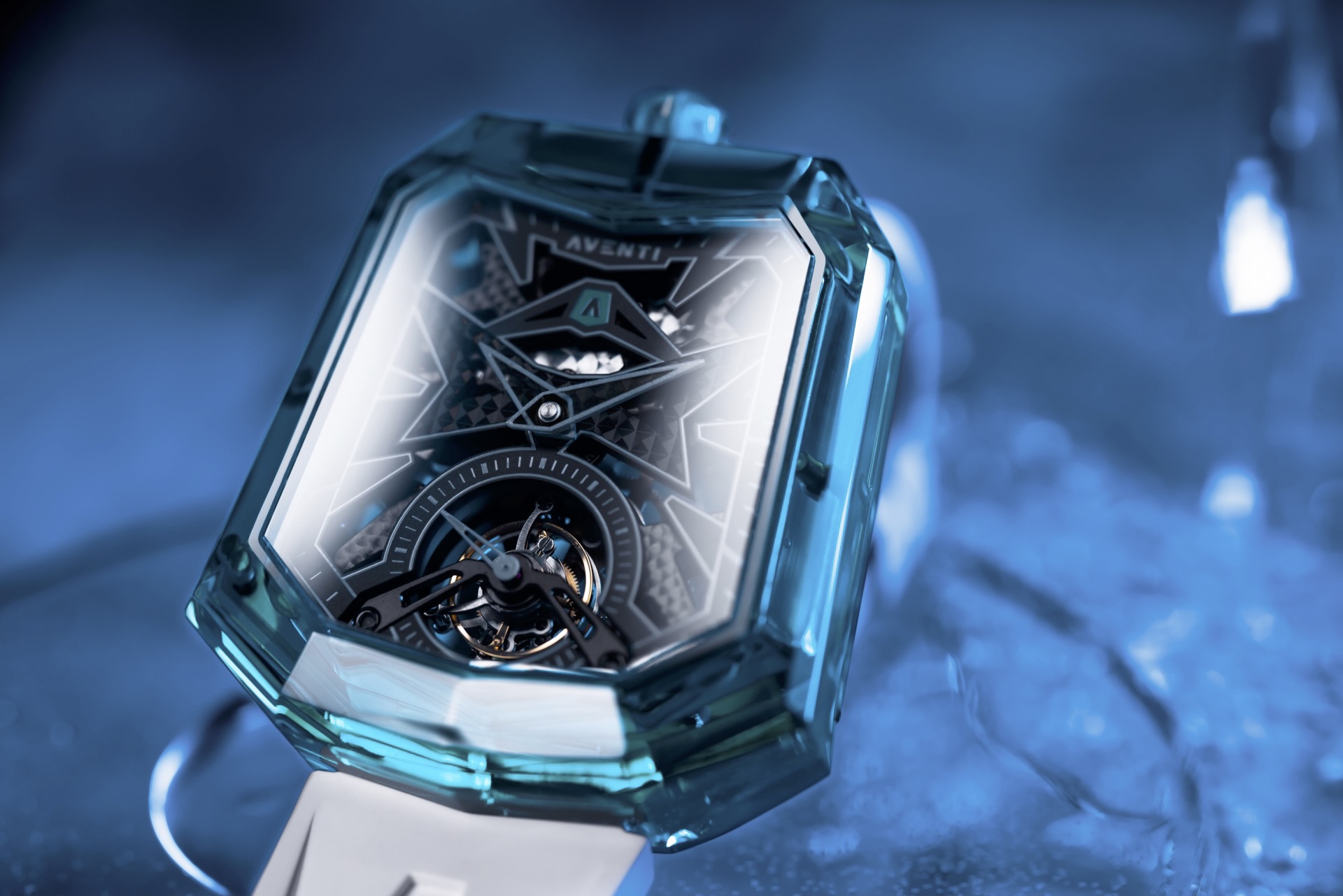 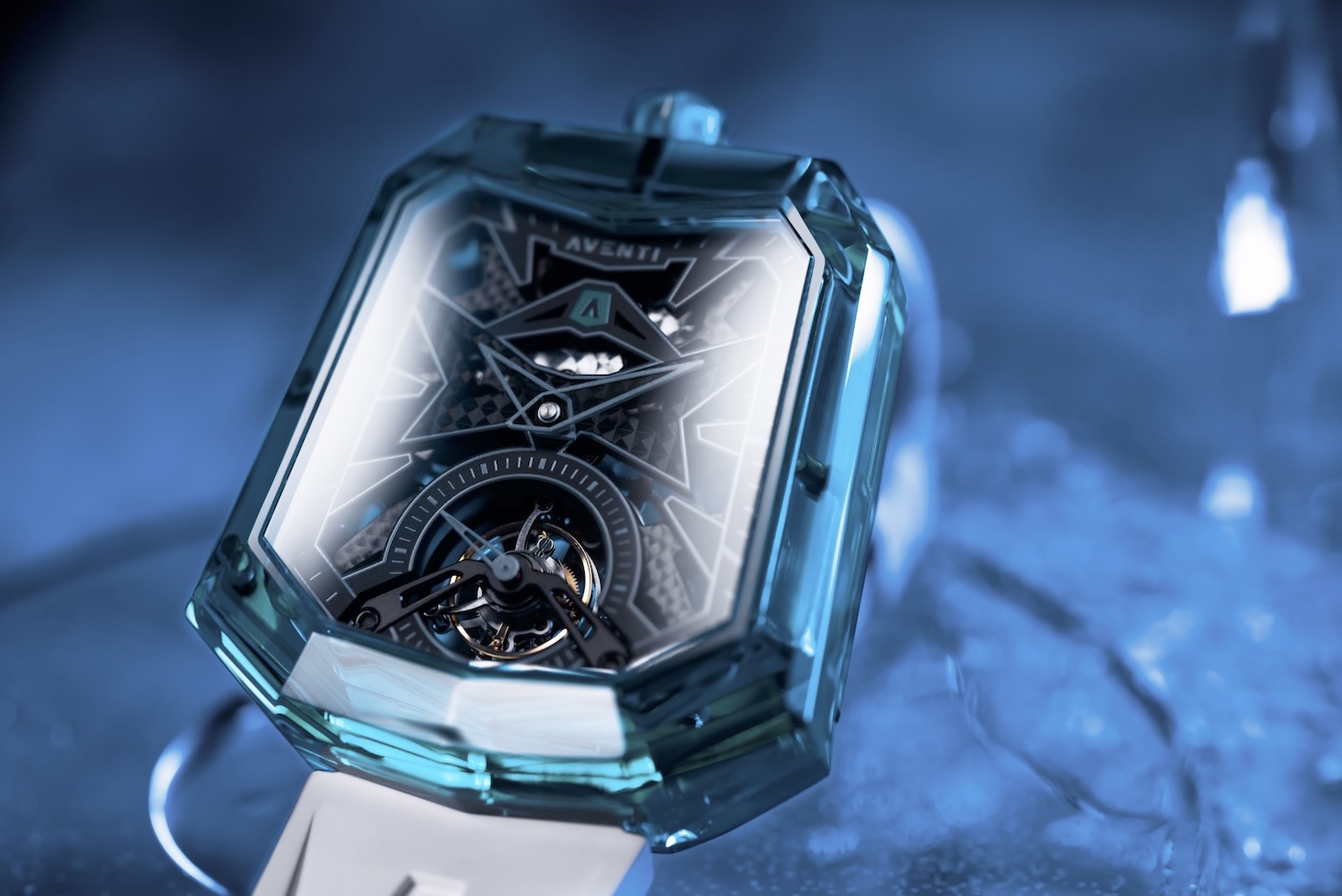 Swiss watchmaking began as a true cottage industry, with individuals and brands specializing in creating each element of a watch, honing their craft over decades and across generations. In developing a new watch, watchmakers were able to source parts — from dials to hands to hairsprings — from the best possible sources, those whose entire business and reputation were built around perfecting their niche craft. In recent years, the industry’s focus shifted toward in-house and vertical integration. Aventi asked the simple question: why? When developing a new watch, why not put your trust in the people and companies that have been honing their craft for decades, if not centuries? Aventi’s newest release, the Wraith A15-01 SaphiteTM Paraiba, demonstrates exactly what’s possible in modern horology when you lean on the expertise of the best designers, suppliers, and watchmakers from across the globe. Pick your superlative to describe the Aventi Wraith: innovative, ultramodern, avant-garde, futuristic. However you choose to talk about the Wraith, one thing is certain — there’s nothing else quite like it in the world of horology. 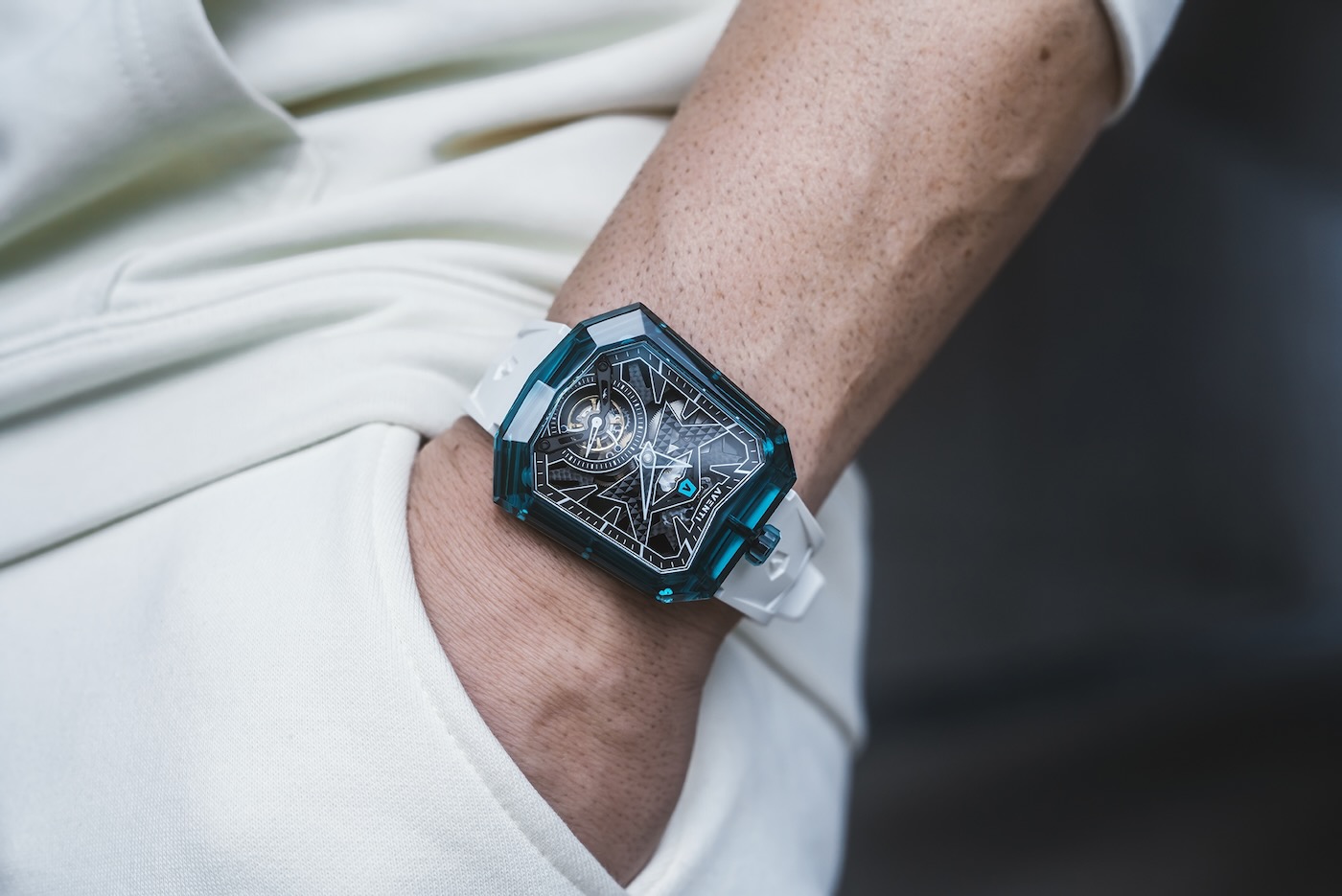 There is no Aventi factory; there is no Aventi showroom. Instead, Aventi creates its watches by finding the best possible partners from around the world to craft each and every component to the highest possible standard. To design the movement, partner with some of the most respected names in modern watchmaking; for components, find the factories that produce components for the most prestigious watch brands in the world. Aventi’s approach is one that’s as old as watchmaking itself, yet the results are beyond modern. 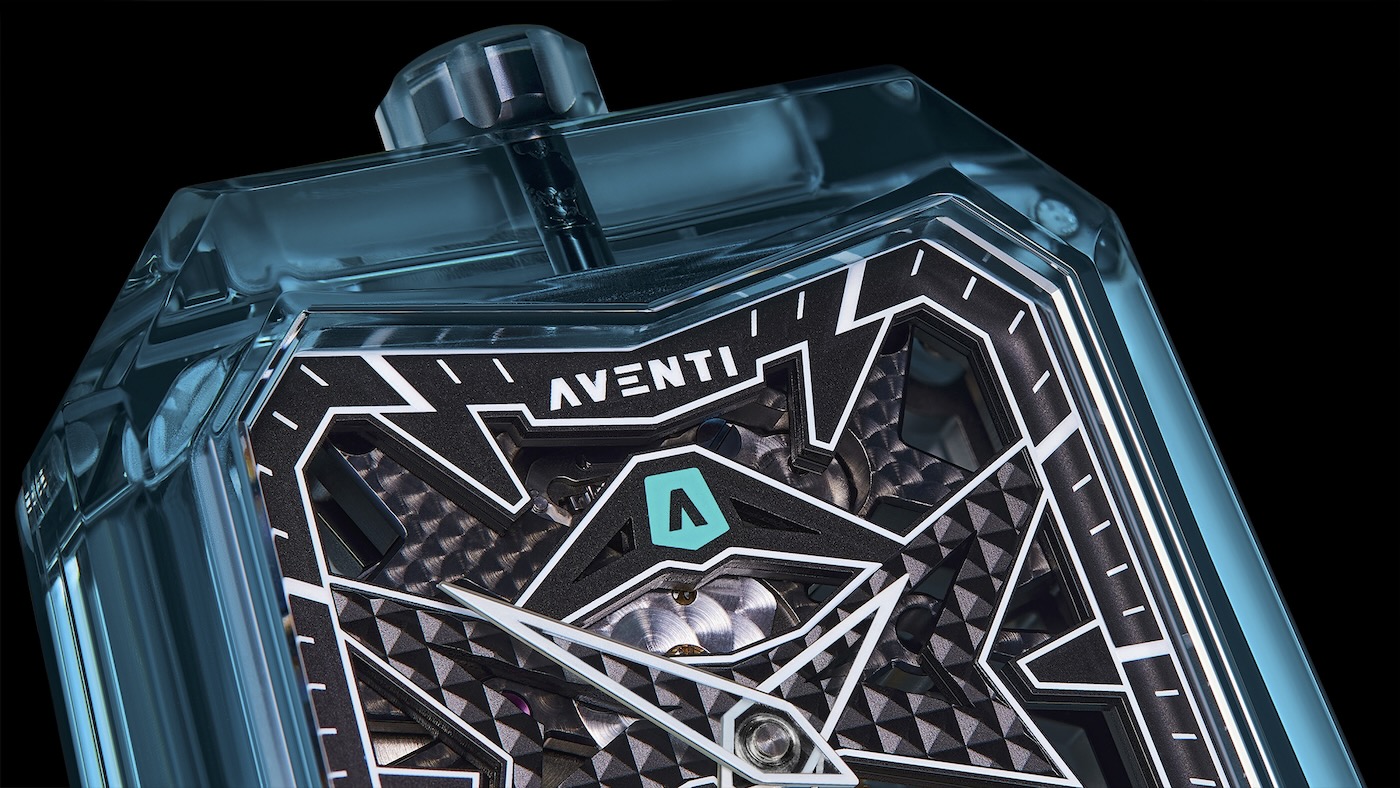 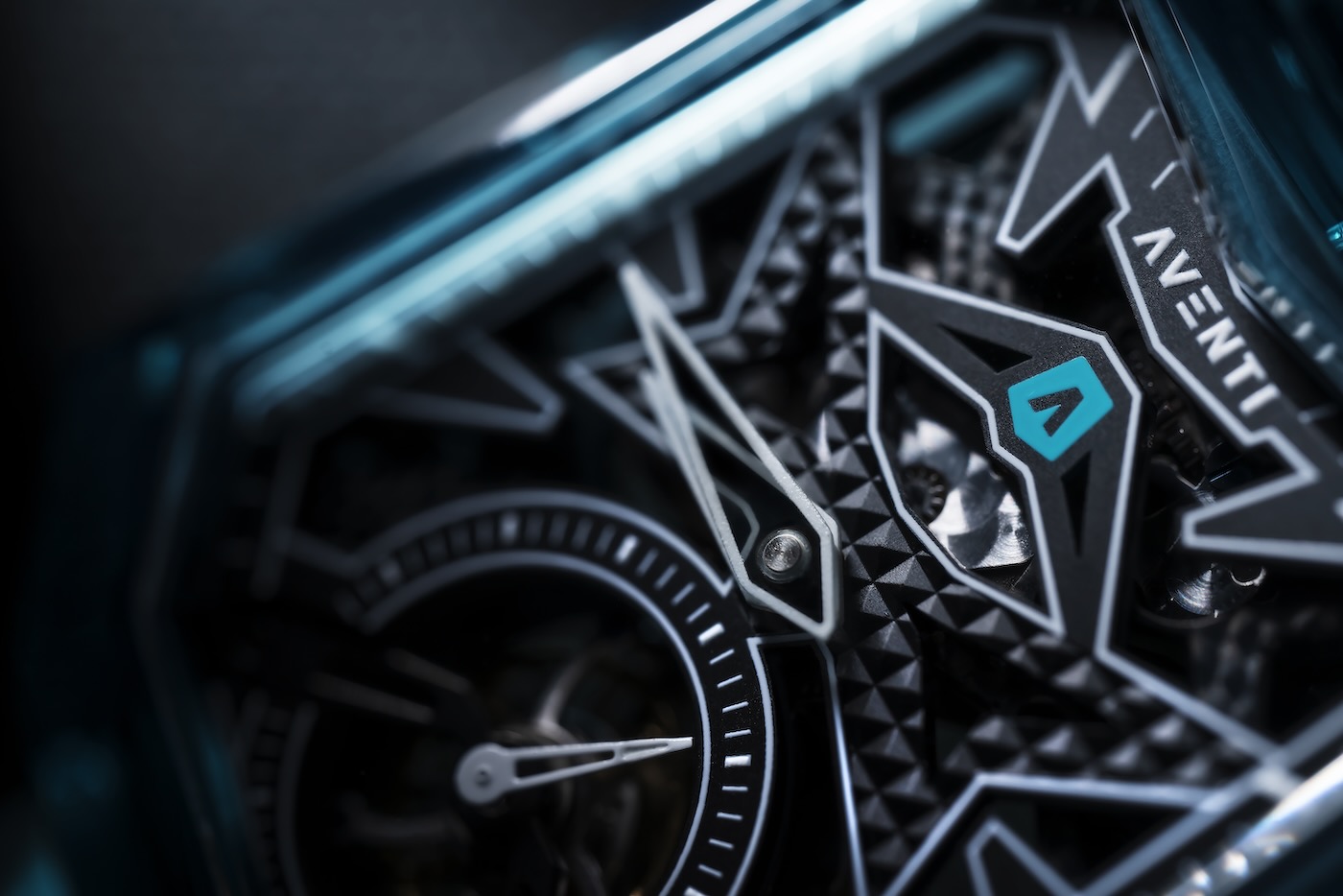 Sapphire crystals are the gold standard in watchmaking, for good reason. Clocking in at 9 on the Mohs hardness scale, sapphire — both the natural gemstone and the synthetic variety — is nearly impossible to scratch. Yet, it’s precisely because of the hardness of the material that sapphire is notoriously difficult to work with and why so many brands have discounted creating cases from the material out of hand. In addition, typical synthetic sapphire, which is made by crystallizing aluminum oxide at high temperatures, is colorless — perfect for crystals but less interesting for watch cases, where color can instantly change the entire look and feel of a watch. Aventi has pushed the boundaries of materials science to create a case from an entirely new, colorful material, SaphiteTM. 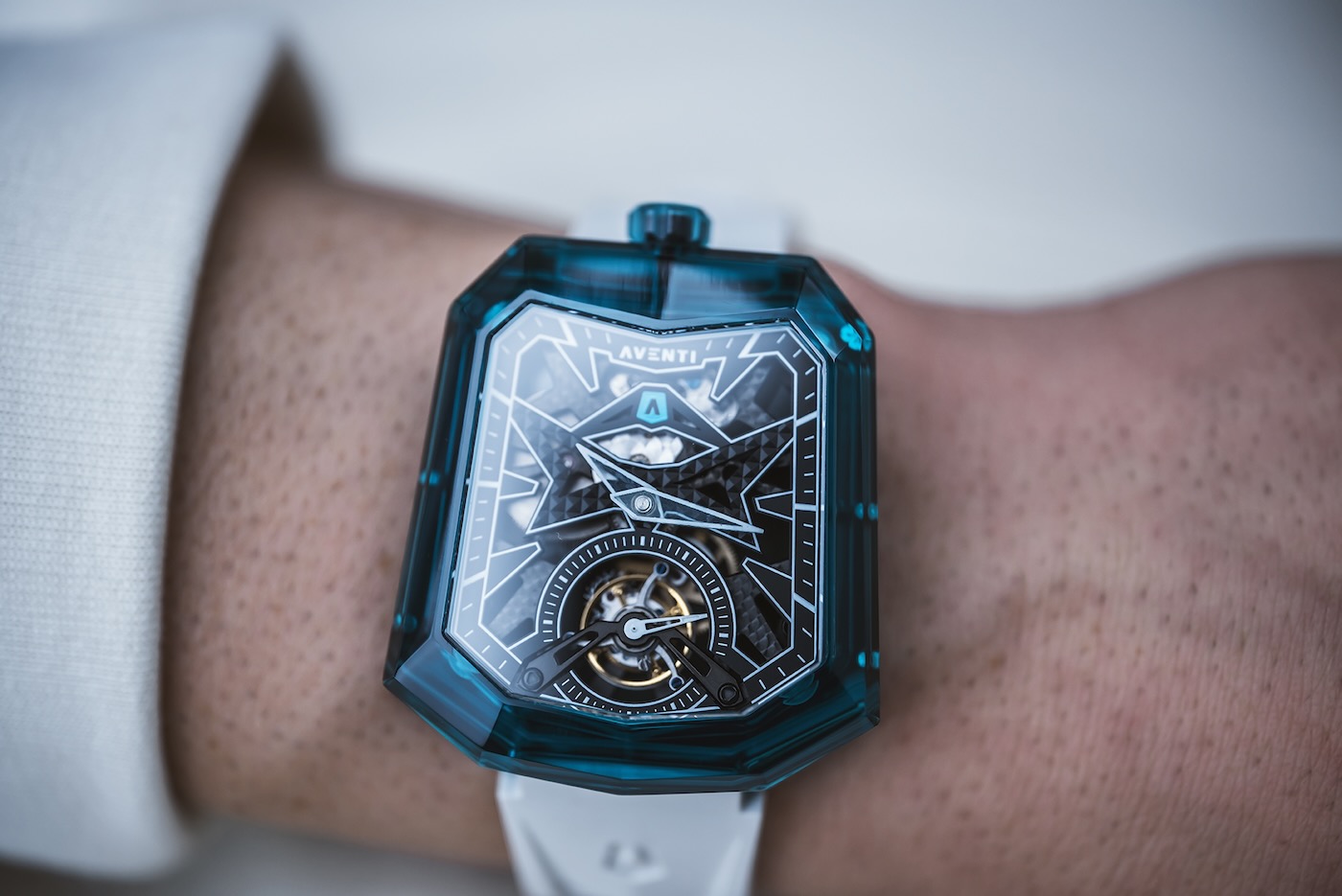 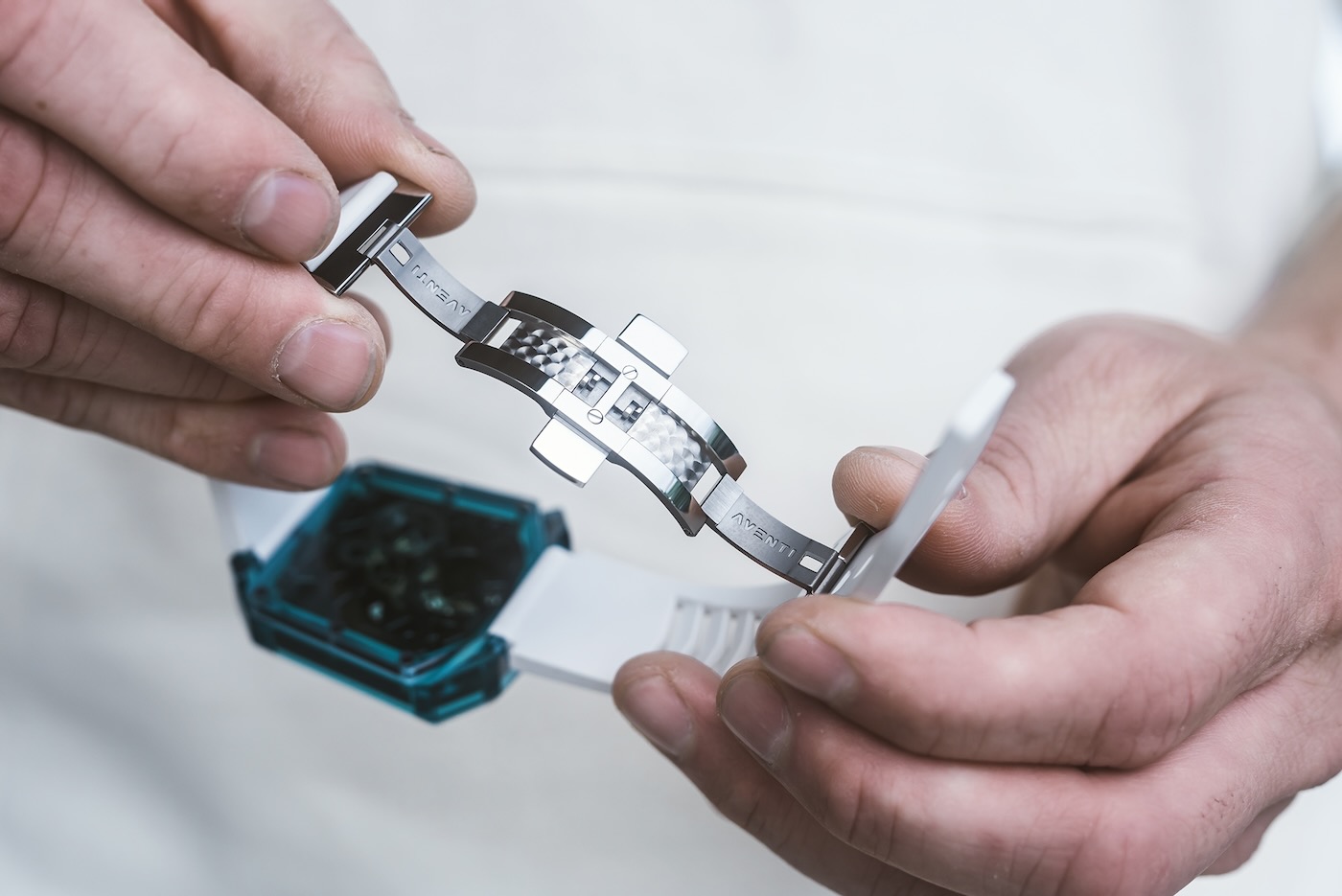 The Wraith is housed in a Paraiba Blue SaphiteTM case, made by incorporating a blend of rare earth elements into the sapphire’s crystalline matrix. This delicate blue evokes the hue of tourmalines mined in Brazil’s Paraiba region, the case mimicking that of a tourmaline jewel with its 92 faces and 124 vertices. Of course, the case wouldn’t be complete without the crown. Also carved of Paraiba Blue SaphiteTM, the crown features 47 individual facets, each cut and calibrated to within 0.01mm tolerance and hand polished. Though it is quite literally a tiny component of the overall watch at 6.5mm wide, the process to create the crown is incredibly time-intensive, taking several days to complete the two-stage hand polish of each of the 47 facets. One slip, one mistake, and the process must start again from scratch. The crown is then topped off with two layers of BGW9 Super-LumiNova to illuminate the Aventi seal, adding a personalized touch to the case. 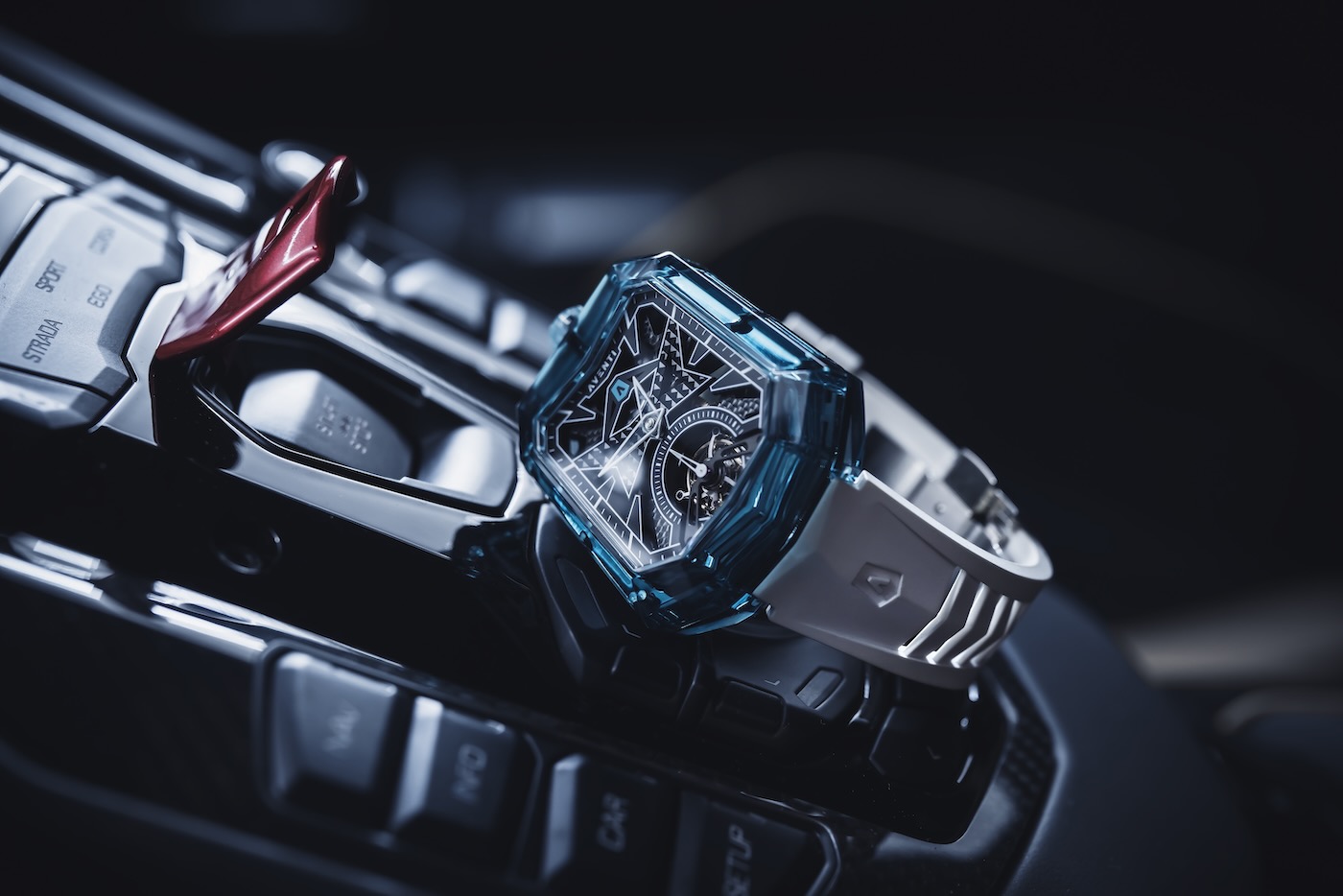 Though the tourmaline blue of the case immediately catches the eye, every single component of the watch has been carefully considered, likely none more so than Aventi’s GT-01S tourbillon movement powering the Wraith. For over two centuries, watchmakers and enthusiasts alike have been enraptured by Abraham-Louis Breguet’s tourbillon regulator. Tourbillons are utterly hypnotic in their movement and a joy to view on the wrist. However, tourbillons are often quite complex, requiring roughly 40 elements. Aventi has stripped to tourbillon down to its barest essentials, comprising only 18 parts for the tourbillon, and 63 individual parts for the entire movement. Simplicity in form and excellence in execution result in a movement that’s accurate, reliable, and impeccably finished. As Aventi describes the GT-01S, it’s a grand complication for everyday wear. 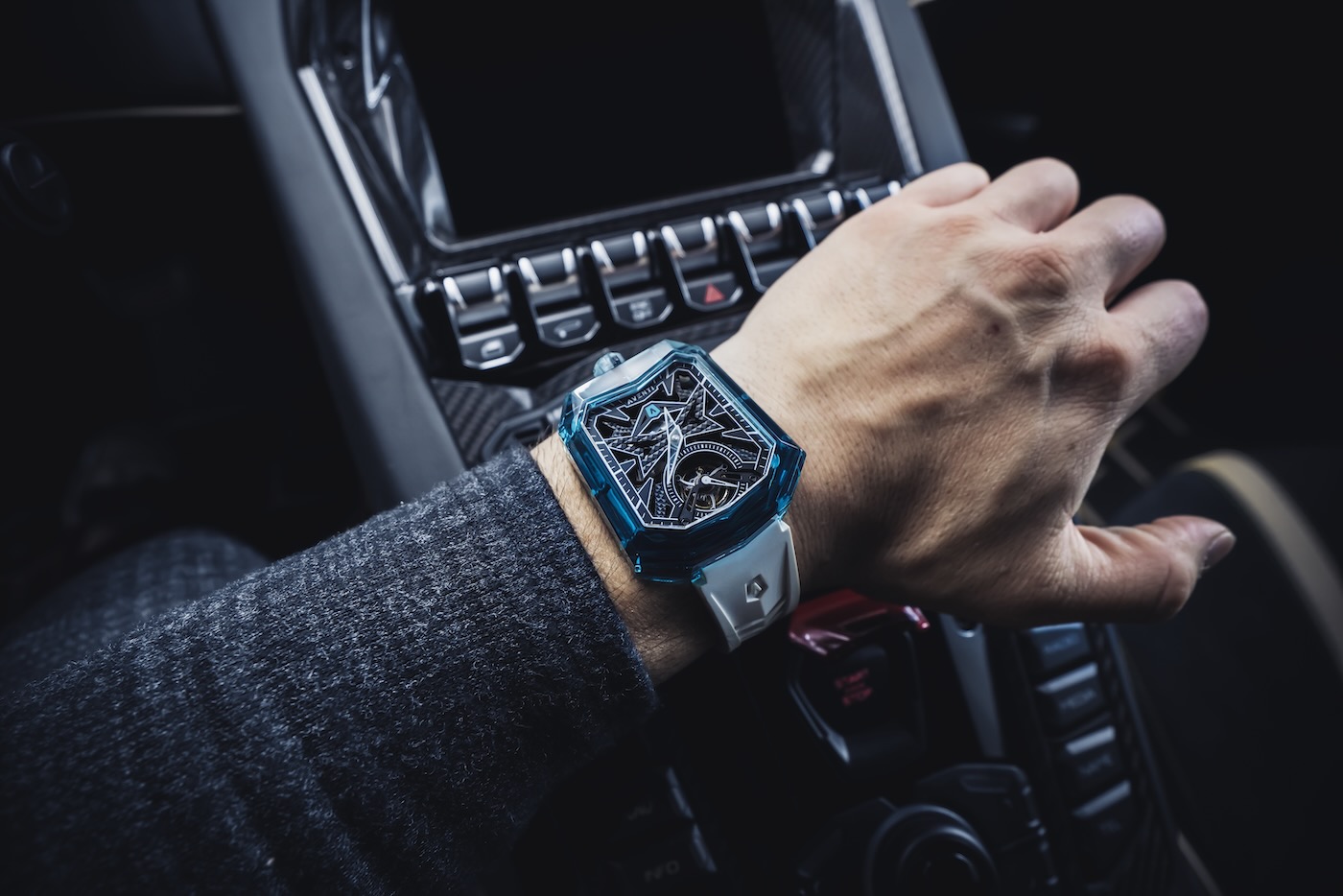 Like the rest of the watch, Aventi is quick to point out that it did not develop the movement in-house — the GT-01S was born from the minds of some of watchmaking’s greatest talents, drawing on centuries of experience. Similarly, components for the GT-01S were sourced from companies like Atokolpa, TEC Ebauches, and Generale Ressorts. These may not be household names, but the companies for which they supply parts, like members of the Holy Trinity of watchmaking, certainly are. 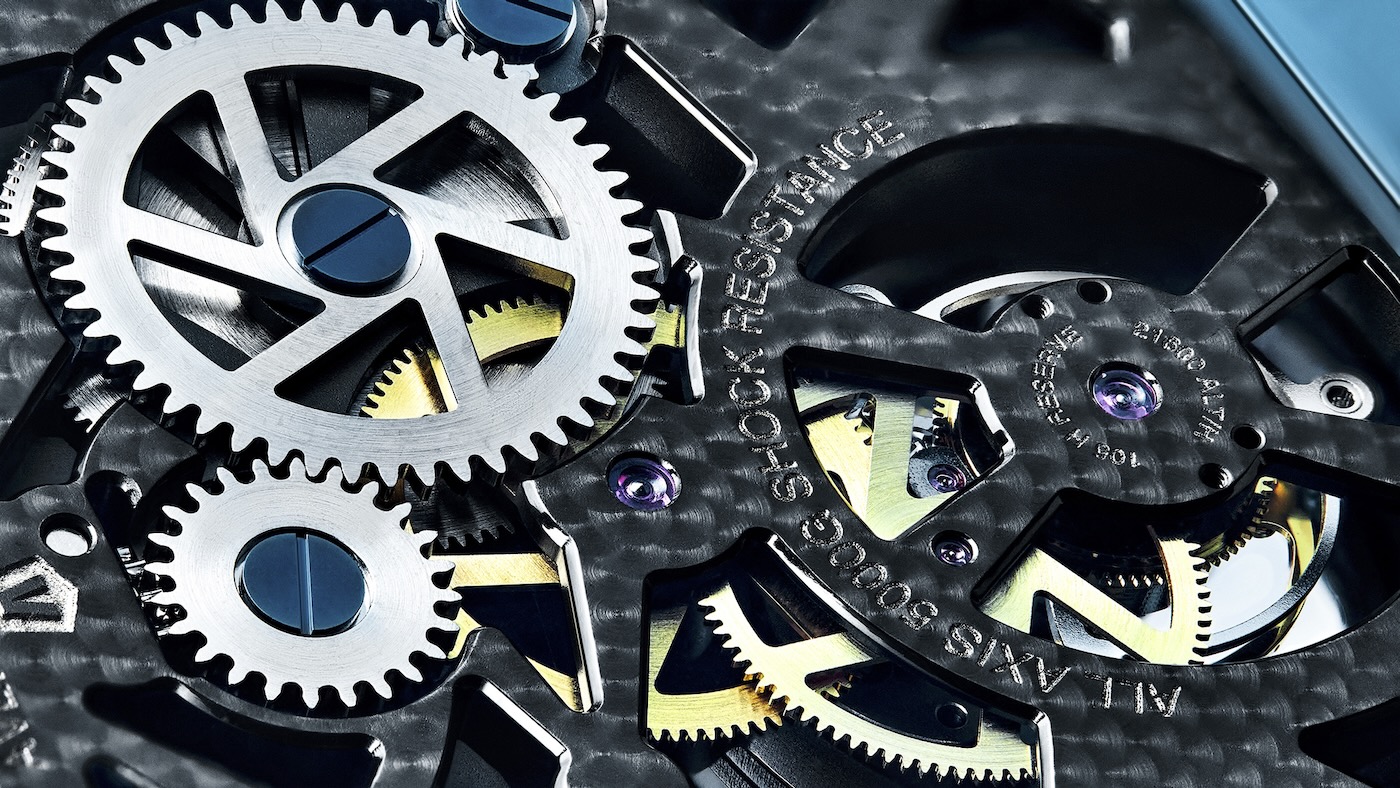 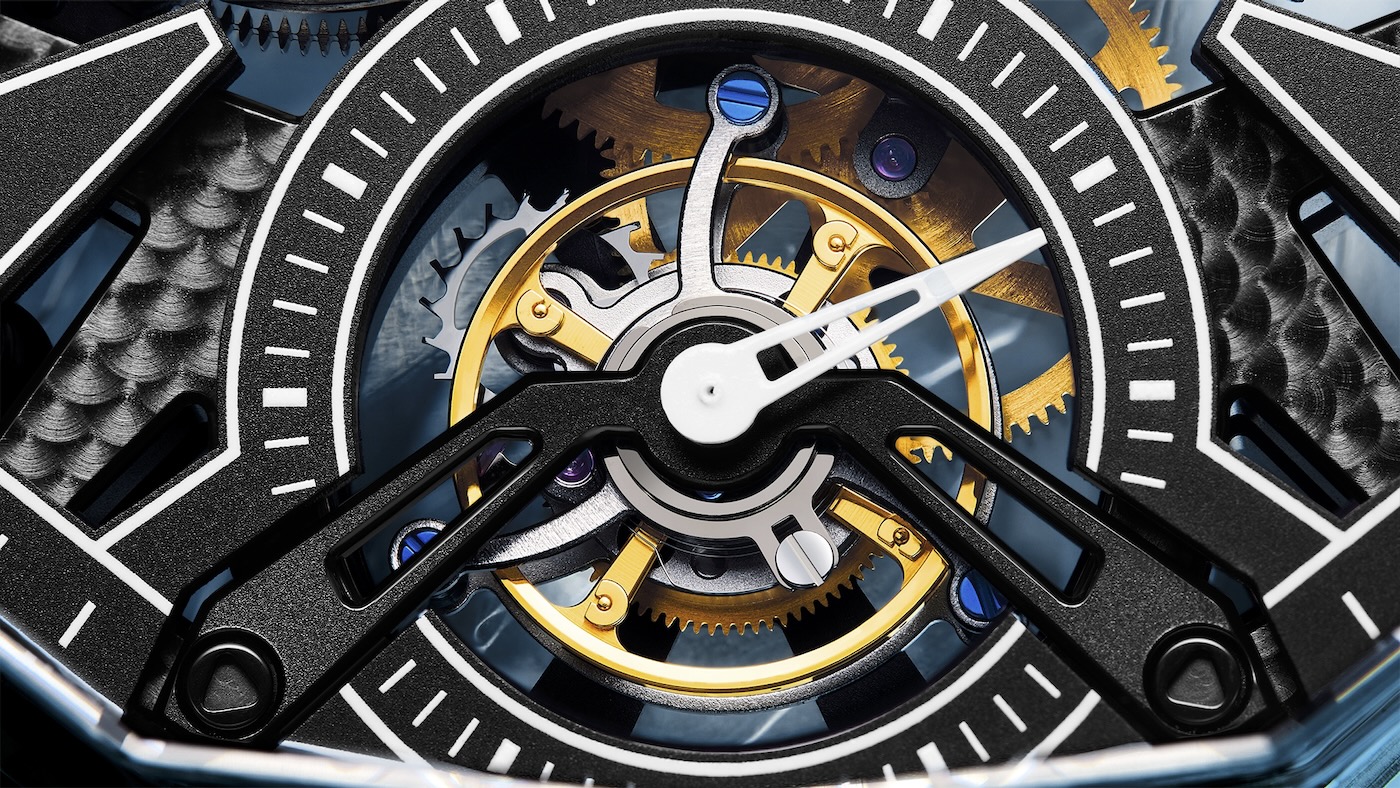 The GT-01S may be a tourbillon, but it is designed with practicality in mind, including over four days of power reserve, high resistance to magnetism (over 2,000 Gauss), and high shock resistance (up to 5,000 G). After assembly, each movement is calibrated by Aventi’s Master Watchmaker, Olivier Mory, to ensure its timekeeping performance exceeds chronometer standards. 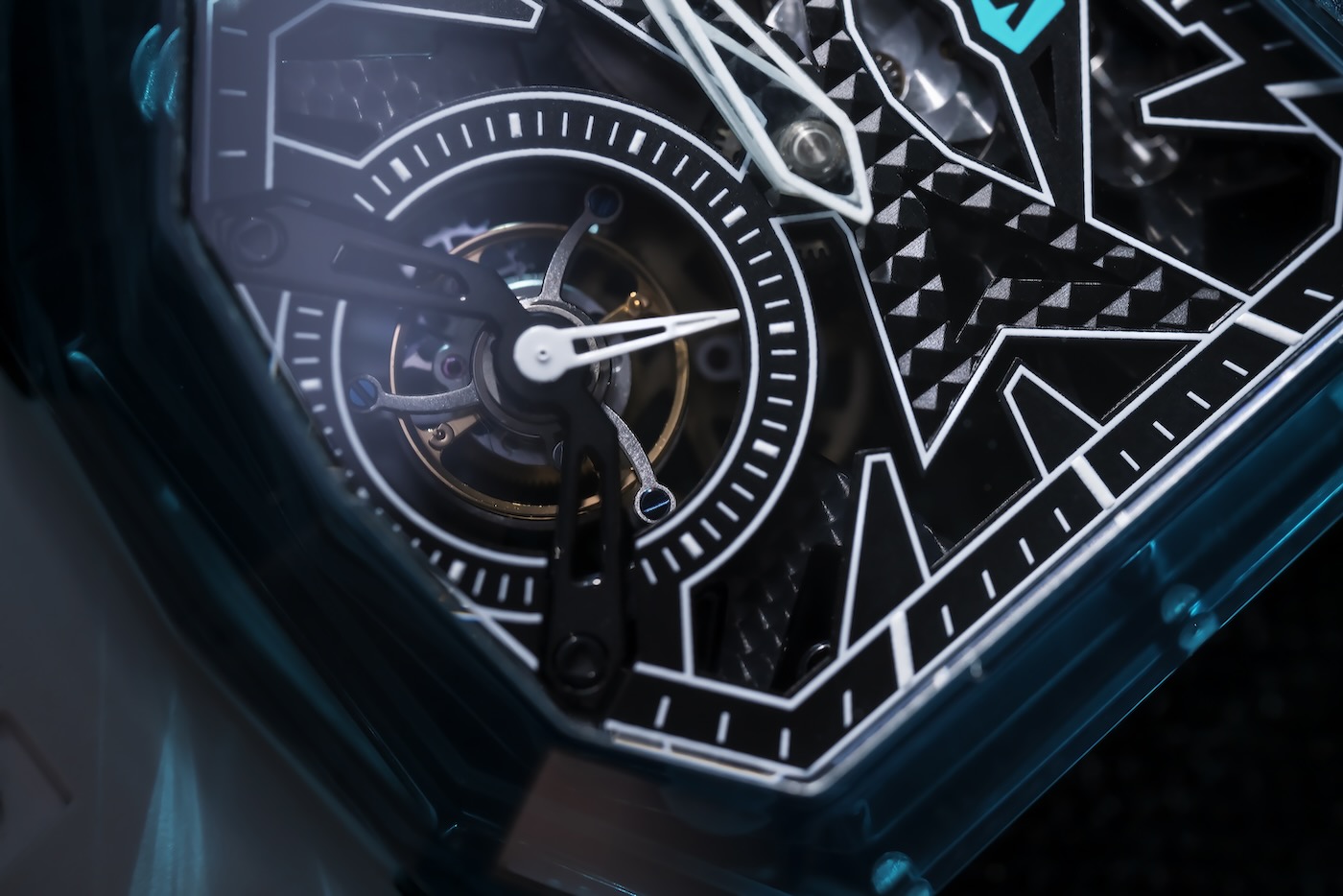 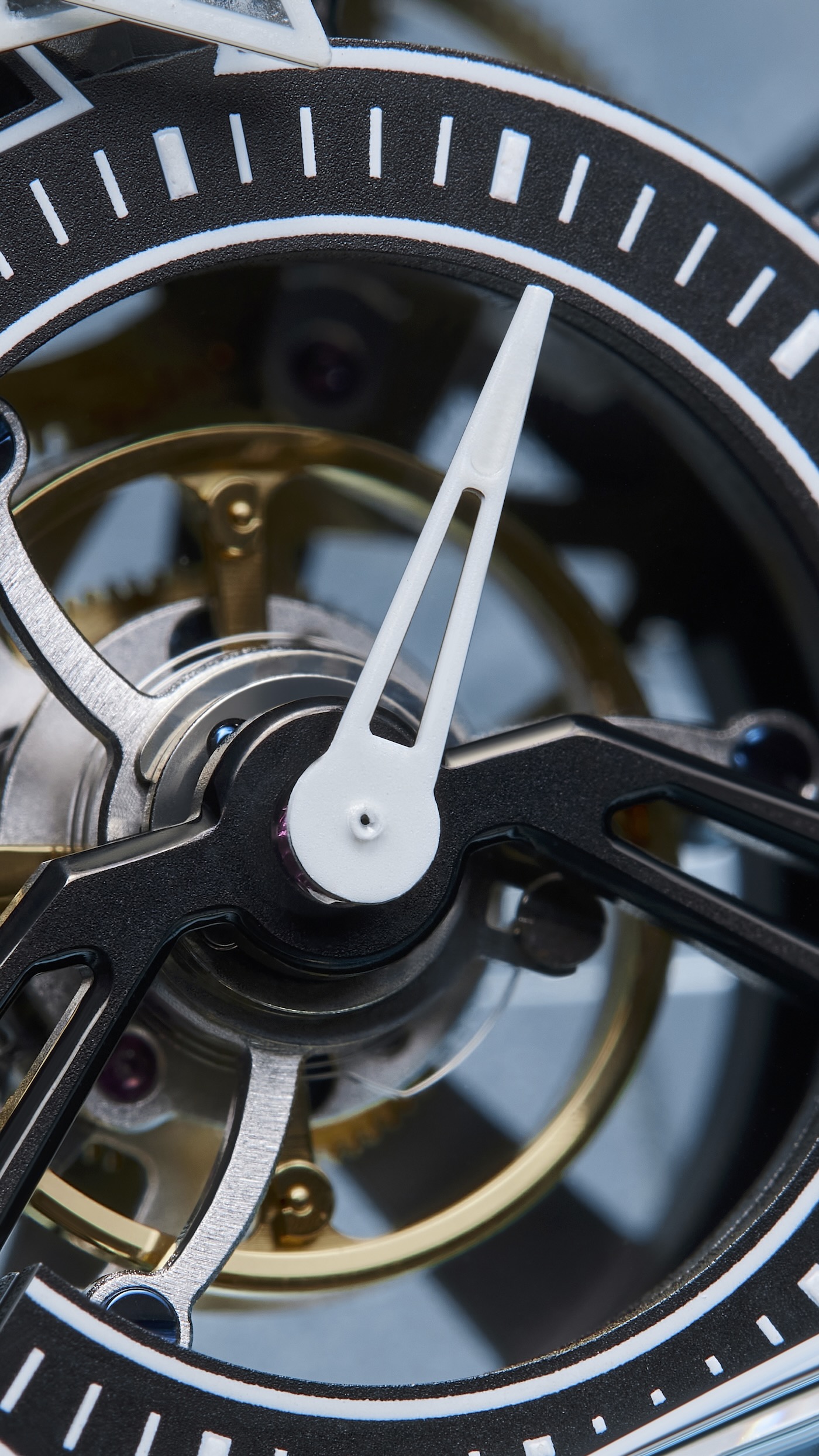 With a movement like the GT-01S, it only makes sense to put it on full display. As such, the dial on the Wraith showcases the skeletonized movement, crafted from black titanium, with plates and bridges finished with perlage and anglage, mirror finishing on all oblique surfaces, and finished with a unique carbon coating to protect every element of the movement. The result is a movement that is utterly unmistakable, at once elegant and aggressive. 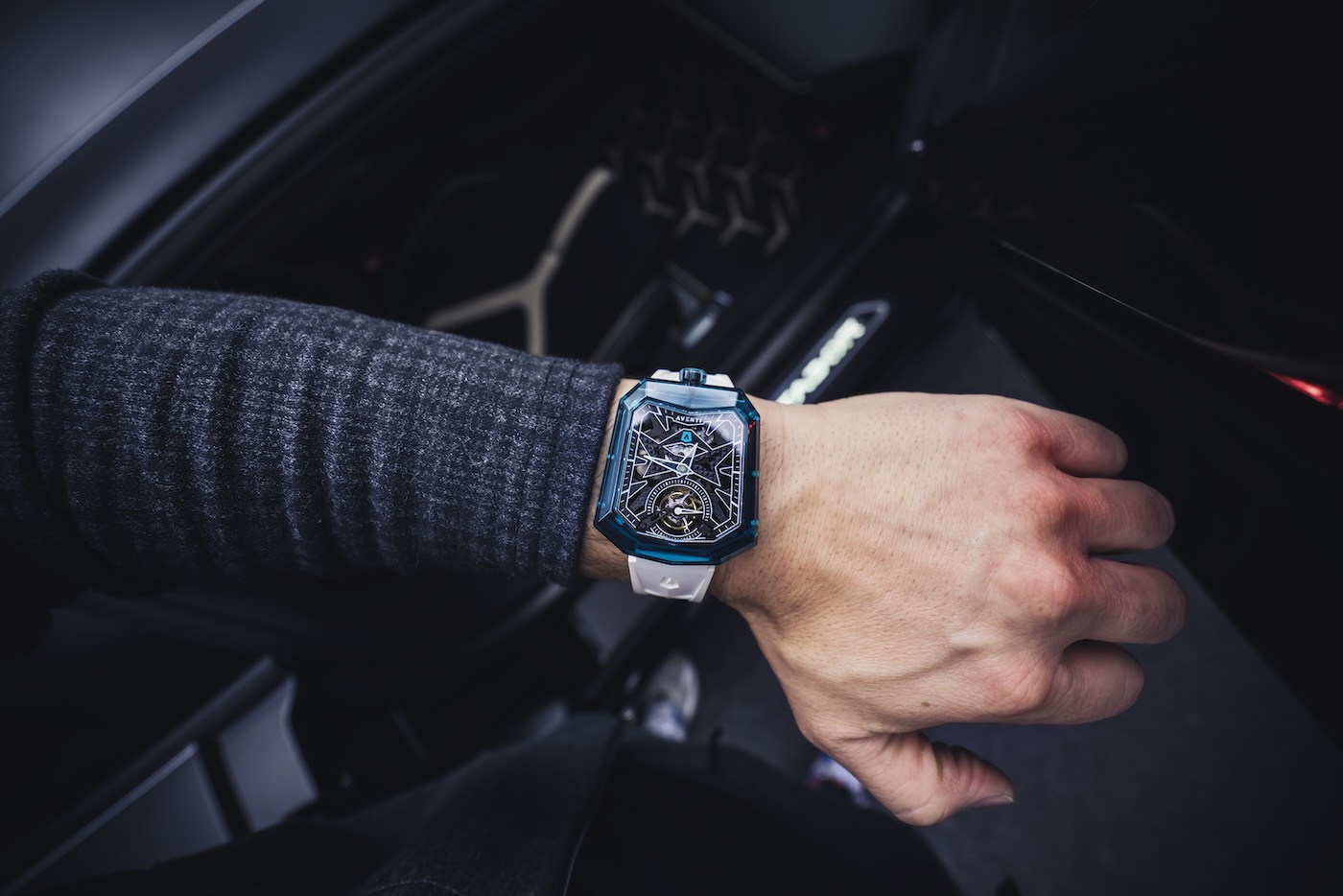 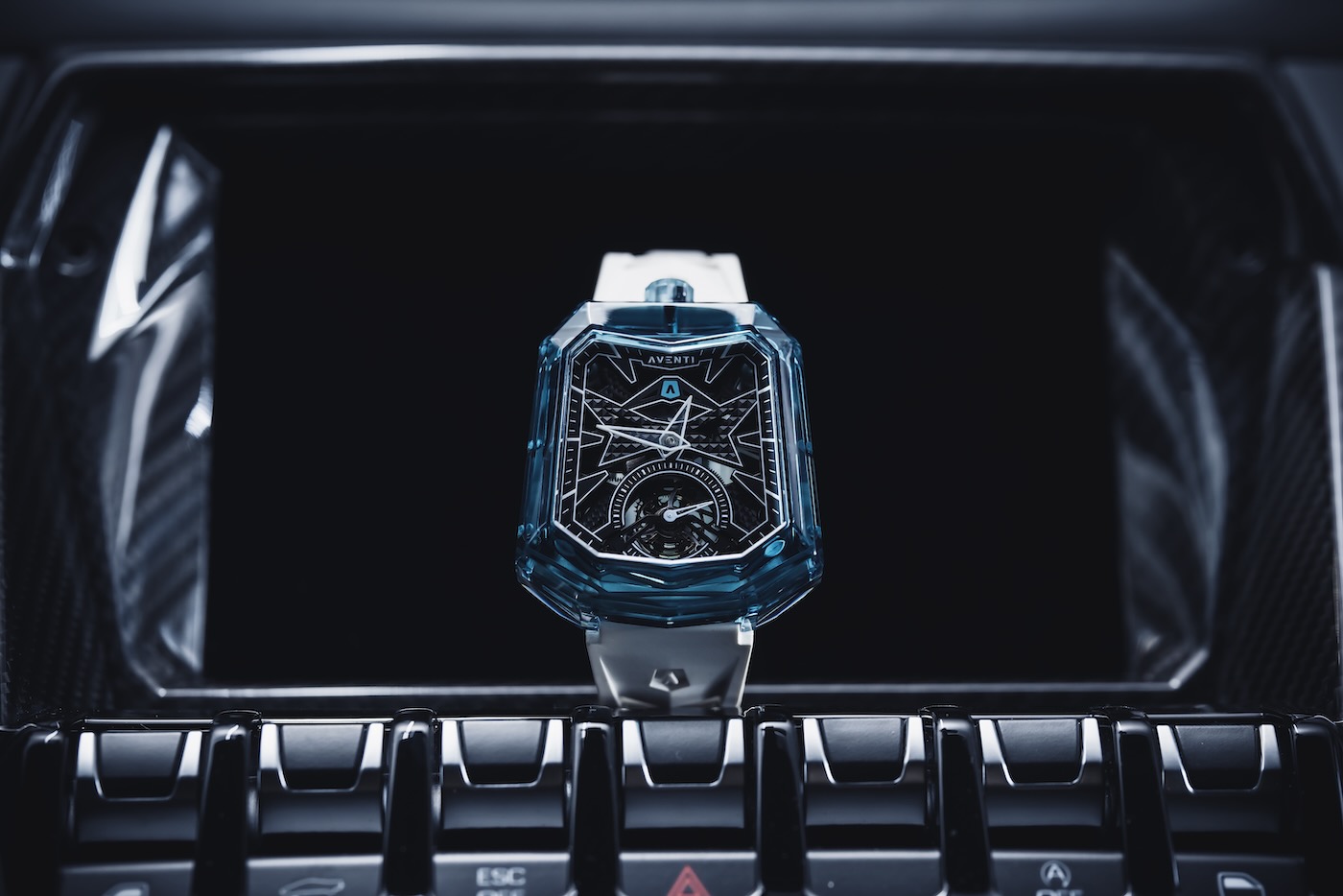 Simply put, few watchmakers ever finish skeletonized dials to the extent that Aventi has done with the Wraith. The dial is skeletonized, polished, guilloched, coated with DLC, laser engraved with over 100 lines, and finished off with BGW9 Super-LumiNova. Completing the package are sapphire crystal hands. The result is like absolutely nothing else you’ll find. It took thousands of hours to perfect the creation of this more than paper-thin handset that floats above the dial, their presence just revealed because their edges are coated with Super-LumiNova, applied with a microscopic tolerance of 0.01 mm. 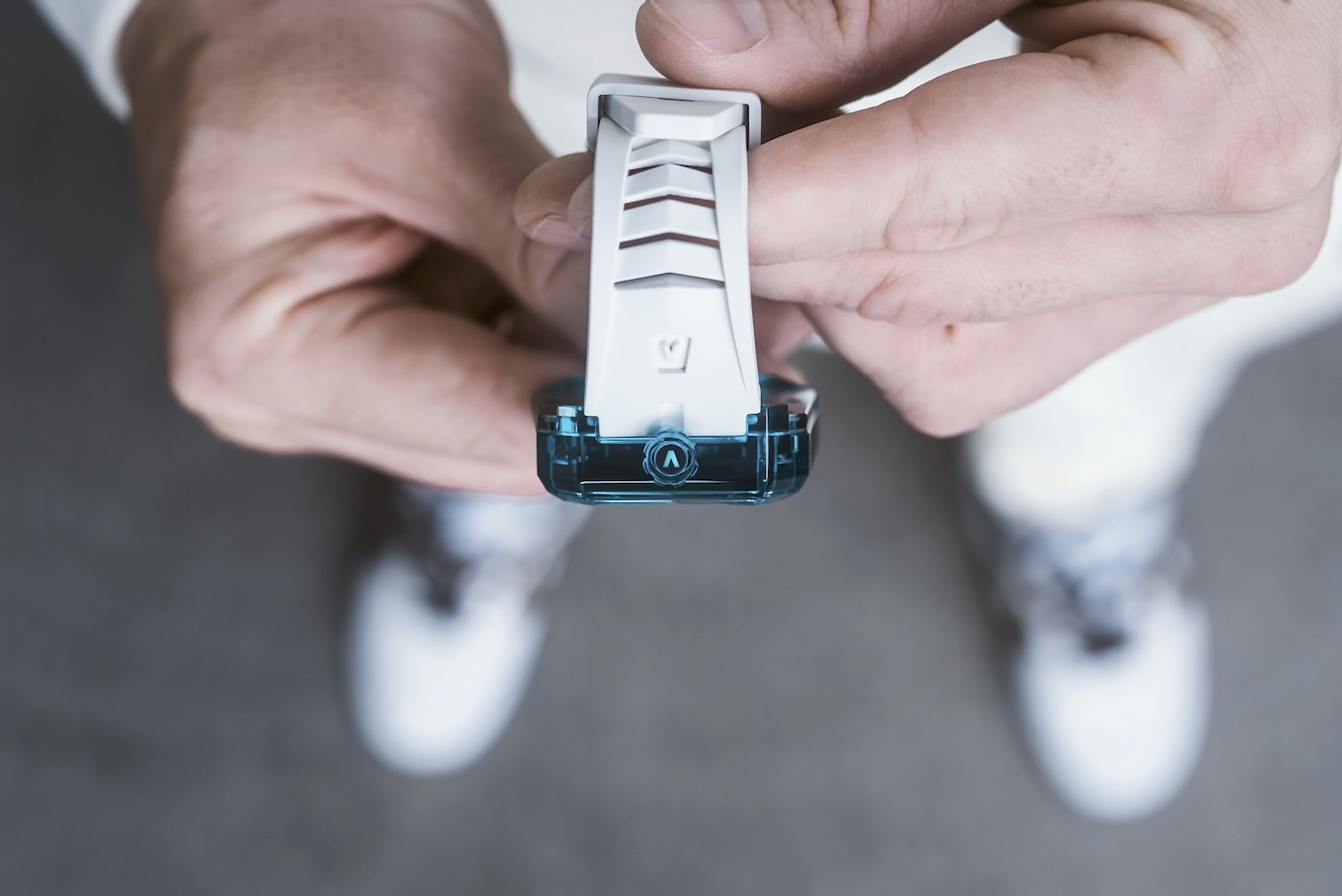 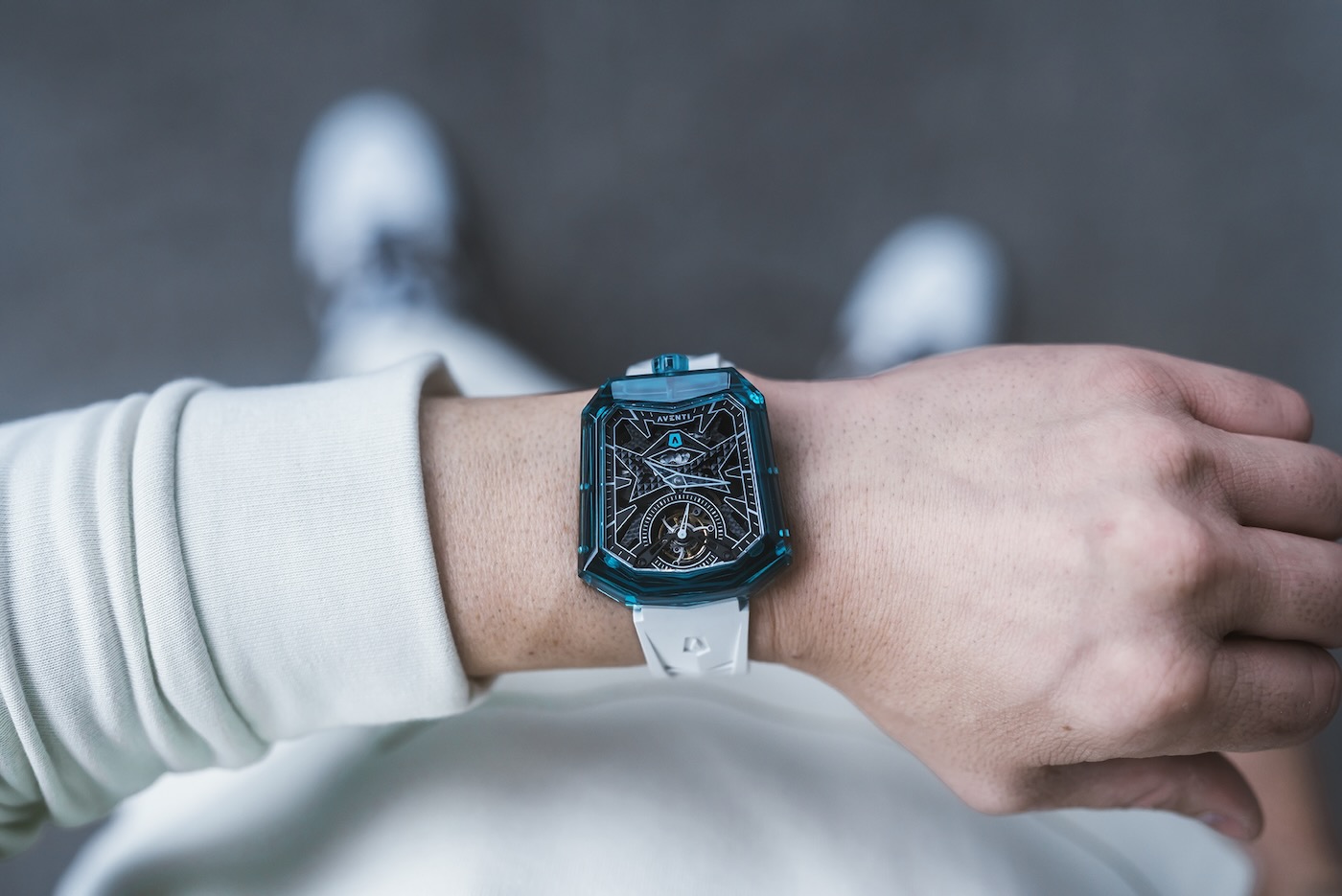 Despite its exceedingly modern aesthetic, the Wraith was made to be worn every day. To ensure unmatched comfort for daily wear, the Wraith comes mounted on a custom molded FKM rubber strap. Like the watch itself, no element has been overlooked. Aventi added vents for comfort and ventilation, a small cavity for the crown, and finished the strap with a Grade 5 titanium butterfly clasp that features a quick release and rapid adjustment. 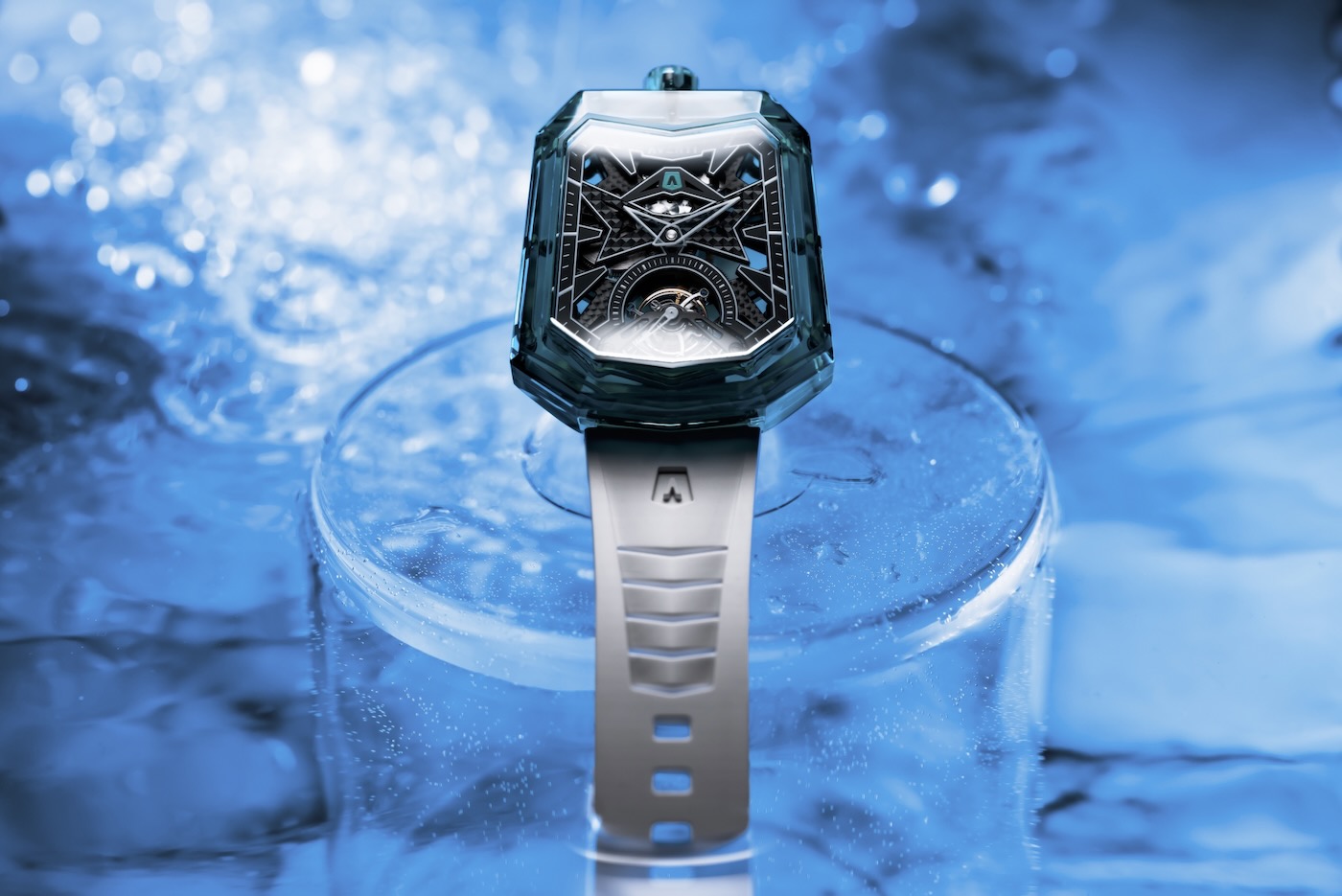 Everything Aventi does — from conception to creation to final sale — is carefully considered. The Aventi Wraith A15-01 SaphiteTM Paraiba is priced at CHF 24,500; however, the watches are available by allocation only in order to avoid unscrupulous profiteering. To learn more about the Aventi Wraith and to register your interest, please visit the brand’s website.