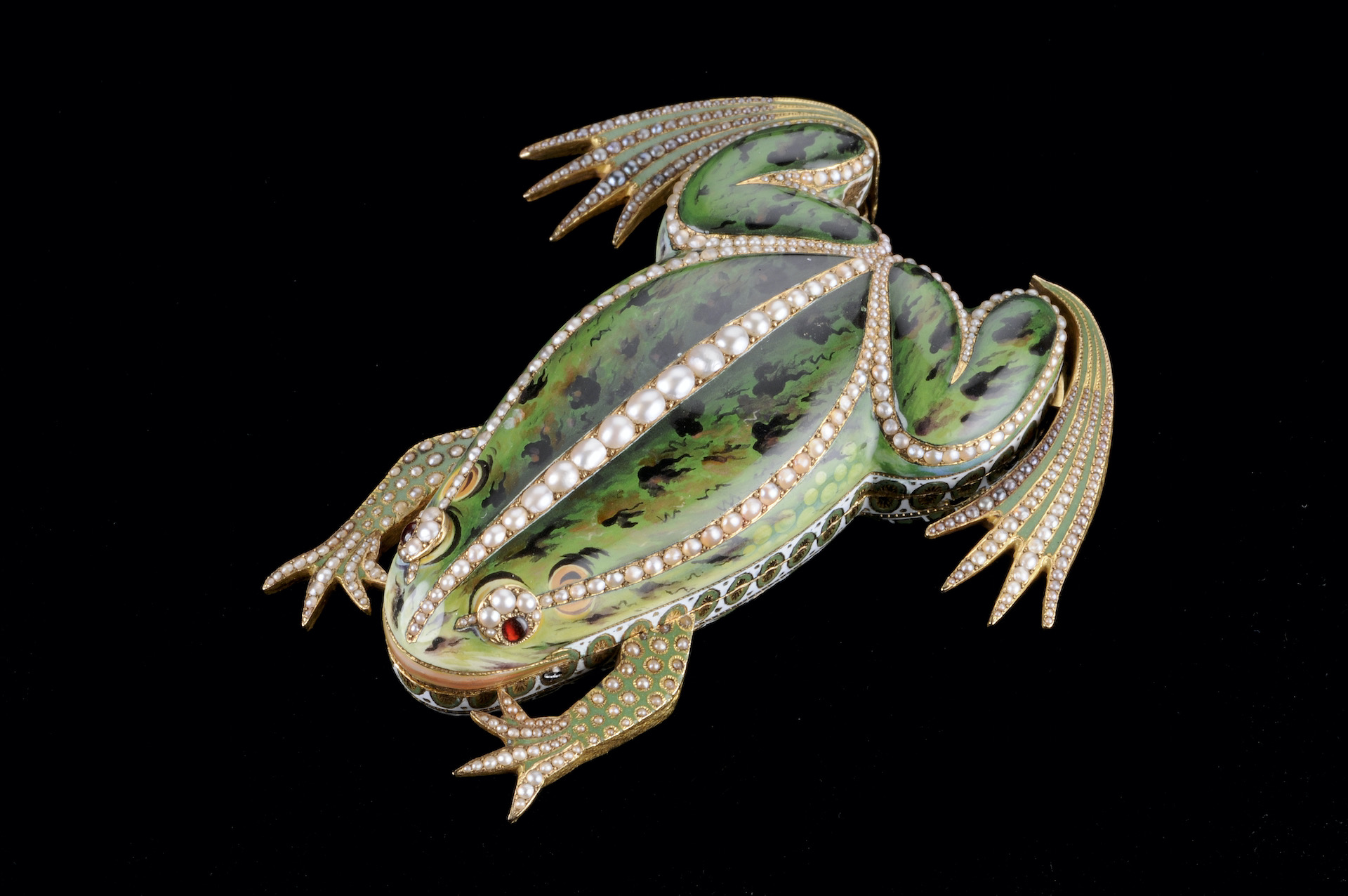 The Frog, The Silkworm, And The Mouse: Parmigiani Fleurier Restores Priceless Automatons 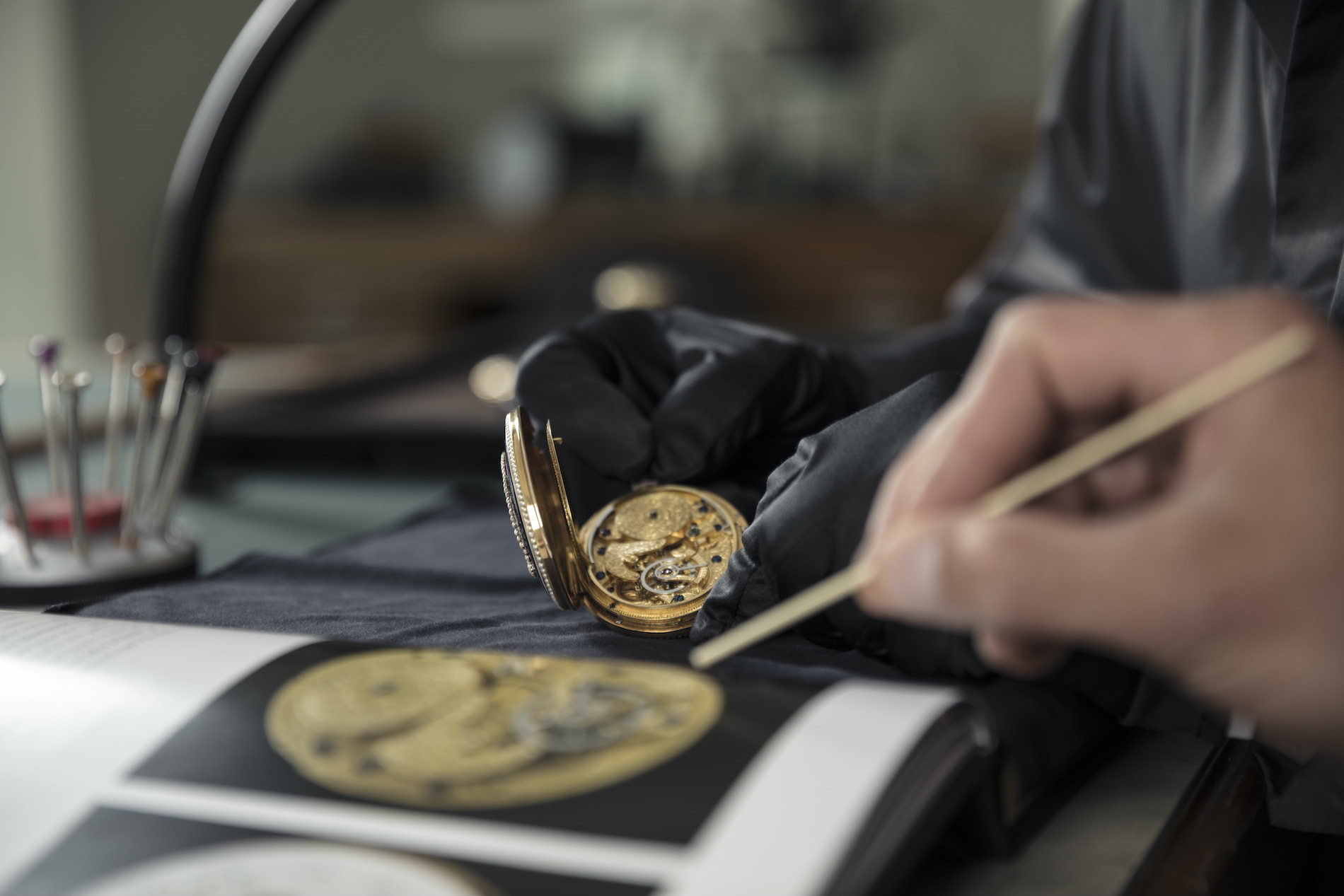 Parmigiani Fleurier may be best known for its exceptional timepieces that range from exquisitely crafted dress watches to avant-garde haute horlogerie, but before Parmigiani Fleurier became what it is today, the brand’s namesake, Michel Parmigiani, built his reputation on the restoration of mechanical masterpieces from a bygone era. While mechanical watches from past centuries occupied the bulk of Parmigiani’s attention, he found himself drawn to mechanical creations of all stripes — including automata. As the brand celebrates its 25th anniversary, it’s a perfect time to shine a light on the craft that was instrumental to the creation of Parmigiani Fleurier. Here, we showcase three brilliant examples from Parmigiani Fleurier’s restoration workshop: the silkworm, the mouse, and the frog. 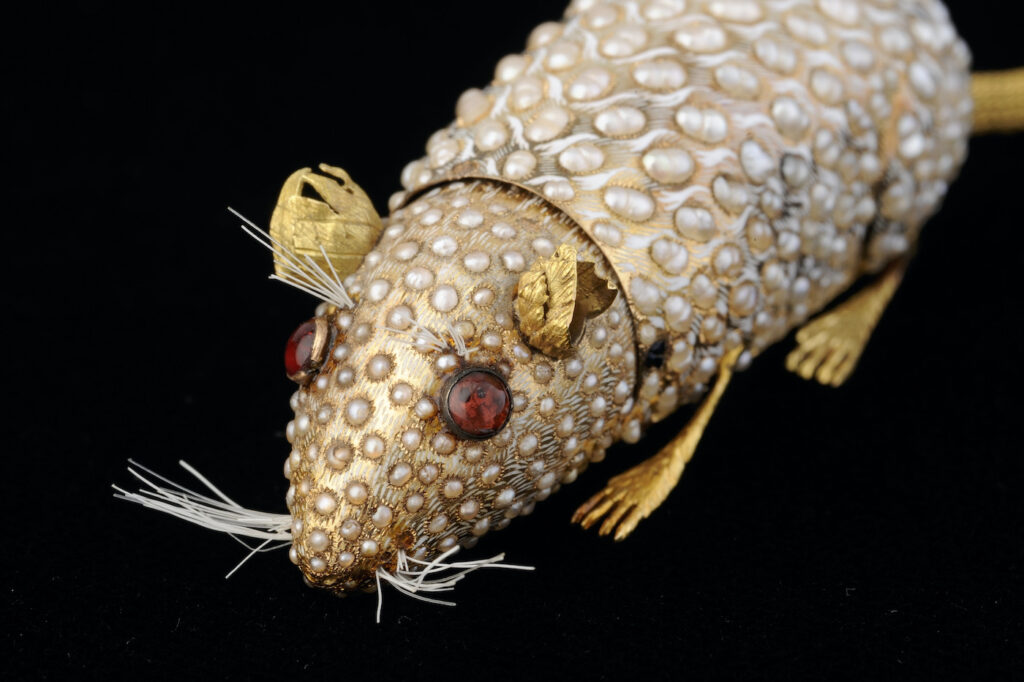 In 1976, Michel Parmigiani opened a restoration workshop aimed at bringing mechanical wonders of the past back to life. Keep in mind, this was during the height of the quartz crisis. Inexpensive, yet incredibly accurate, quartz movements from Asia transformed the Swiss watch industry seemingly overnight, resulting in the loss of 90,000 jobs and turmoil in the traditional Swiss watch industry. While some brands embraced this new form of watchmaking, many more simply shuttered their doors. Michel Parmigiani, on the other hand, chose this moment of change to open his own workshop in Couvet to focus solely on traditional watchmaking and restoration. Risky, to say the least, but the young Parmigiani was dedicated to keeping the centuries-old craft of mechanical watchmaking alive through the restoration of antique watches and mechanical devices. Asked why the painstaking work of restoration appeals to him, Parmigiani’s answer captures the essence of the craft: “It is a rare joy to restore a horological piece. To free it from the ravages of time and of men is to reinstate it within a temporal truth so essential to our memory.”  Restoration is part of the soul of the brand and a continuous source of inspiration; it allows Parmigiani to resurrect the past but also fuels the progression of Parmigiani Fleurier’s watchmaking. 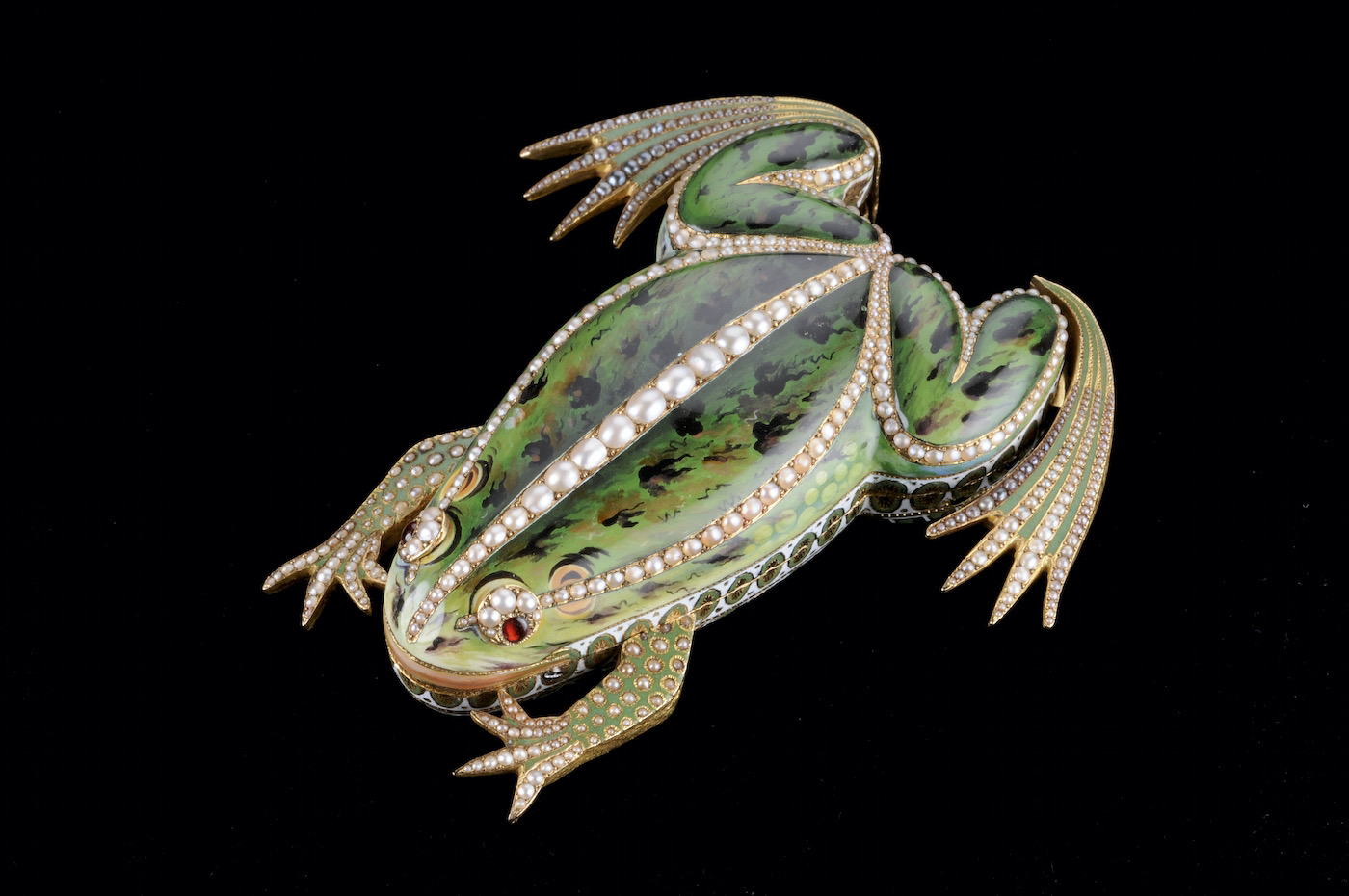 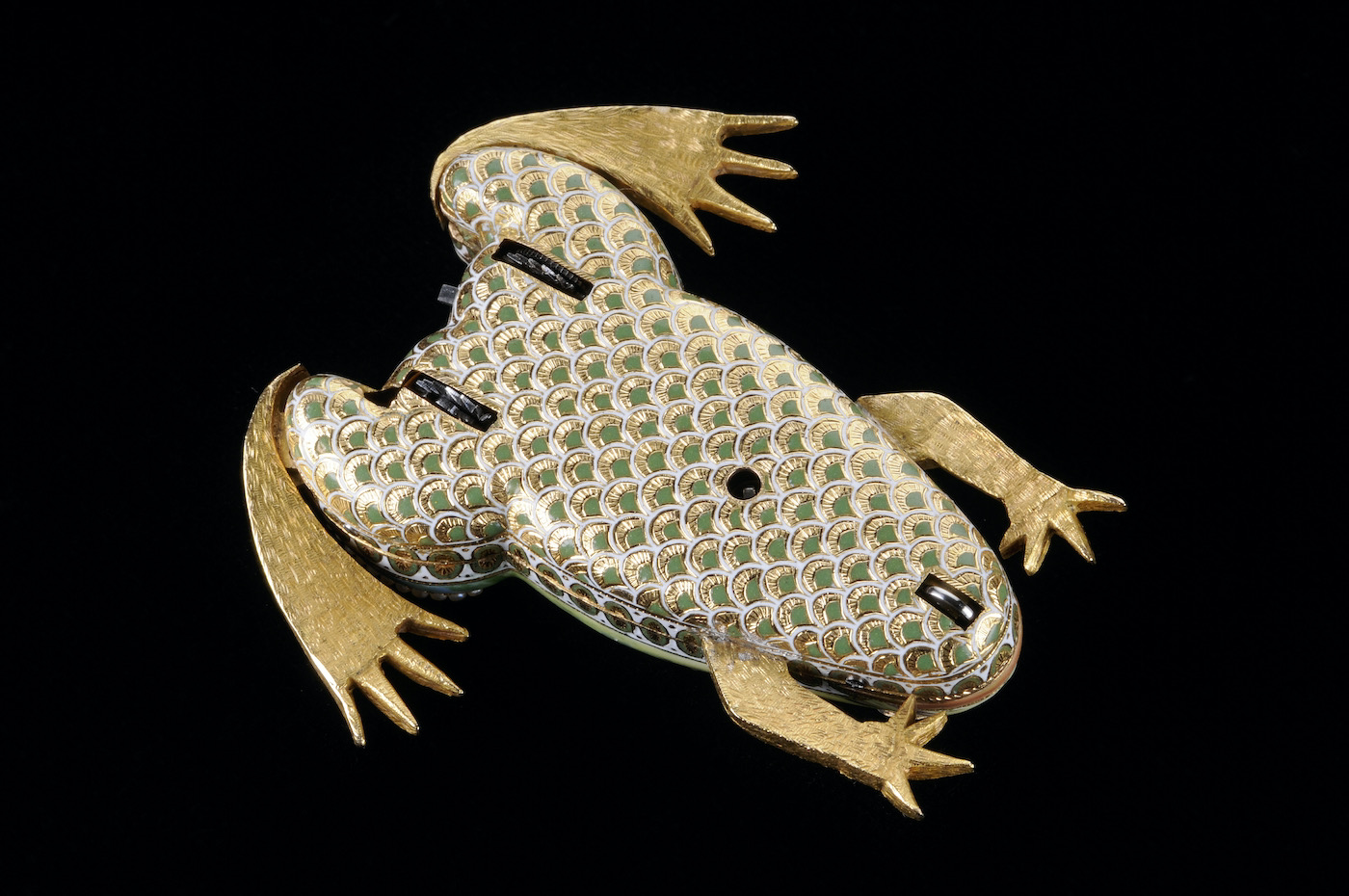 Restoring mechanical devices of the past allows the Parmigiani to unearth solutions to mechanical and technical challenges that have faced generations of master watchmakers. Watchmaking — both as an art and a technical challenge — has remained largely unchanged over the centuries. And, as George Santayana famously said, “Those who cannot remember the past are condemned to repeat it.” That aphorism remains as true for watchmaking as it does for international politics. By returning these mechanical devices to their original condition while maintaining functionality and preserving the expertise and craftsmanship with which these devices were imbued upon their creation, the master watchmaker refines their craft. The before and after photos of the restoration of the silkworm, the frog, and the white mouse clearly illustrate just how much care must be taken to return these pieces to their former glory. 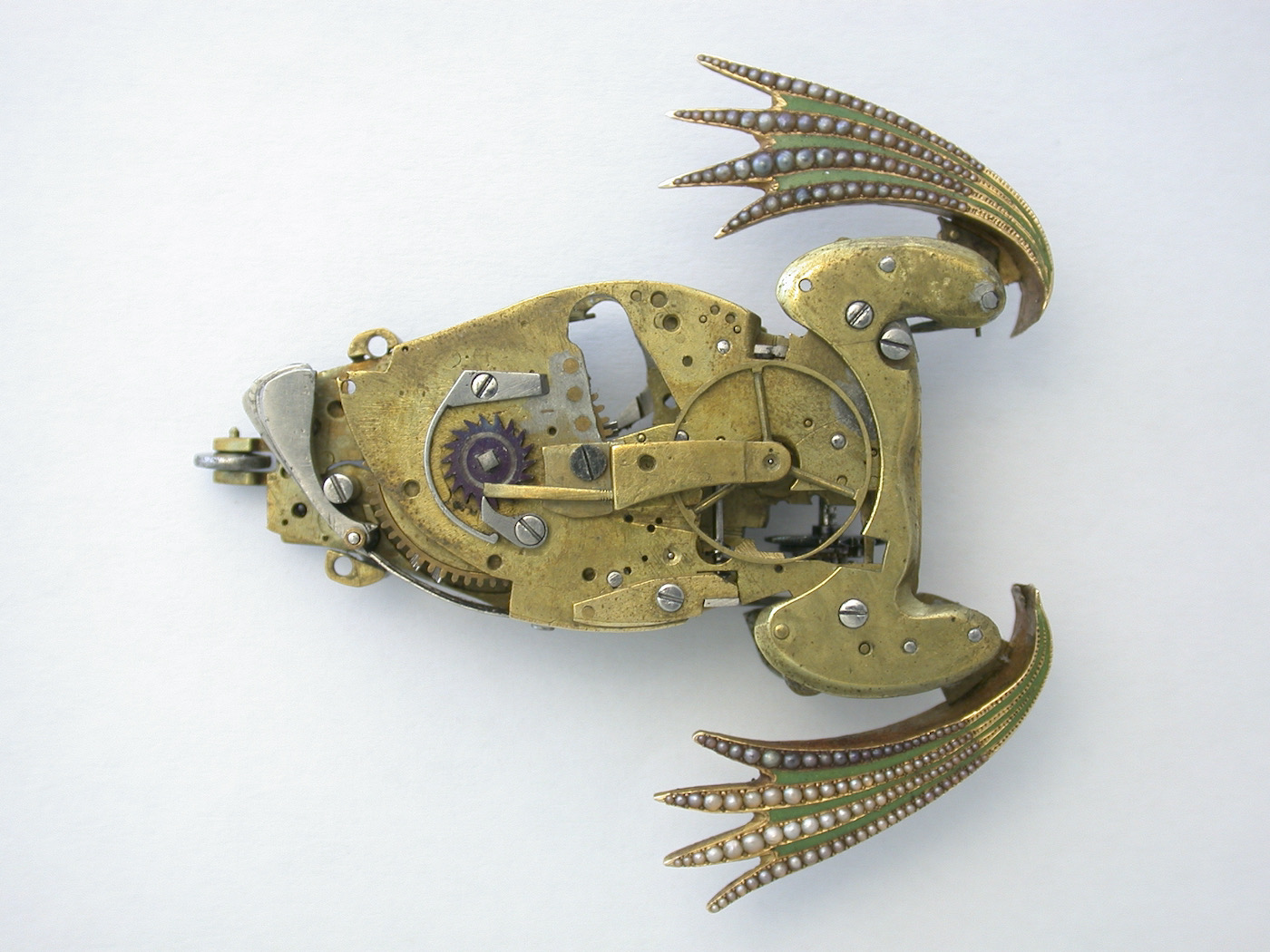 The Frog prior to Parmigiani’s restoration. 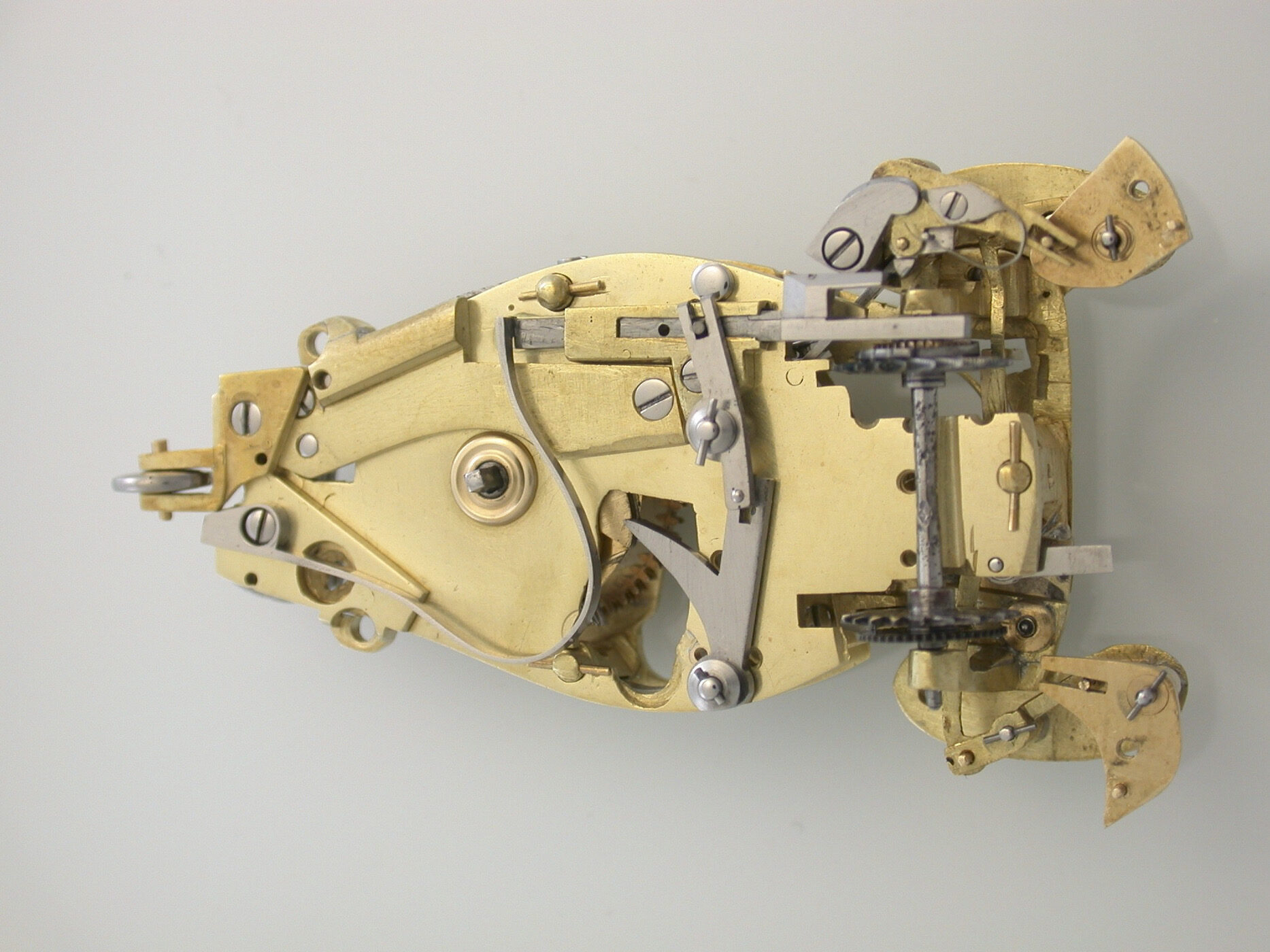 The Frog after restoration.

Parmigiani Fleurier’s restoration workshop likens the process of restoration to archaeology — the utmost care must always be taken, as any modification to a component is likely irreversible. Like any seasoned archaeologist, the team begins with days of careful examination of the item. The watchmaker must dive into the archives to pore over dusty tomes and scientific articles, visit museums and collections and attempt to truly know the piece before it’s even opened. The watchmaker must understand not just the mechanism, but also the techniques used to create it. And restoration goes well beyond bringing the mechanism back to life — the watchmaker must be a master of precious metalwork, enameling, engraving/chasing, gliding, and glasswork. During the restoration, the watchmaker must also look to the future, ensuring that while the piece remains original, the solutions employed to bring it to life are reversible. Above all, the art of restoration necessitates that the watchmaker be invisible — they simply act as a conduit to the past, their own design style and personality locked away in order to restore the piece to the watchmaker’s original design. 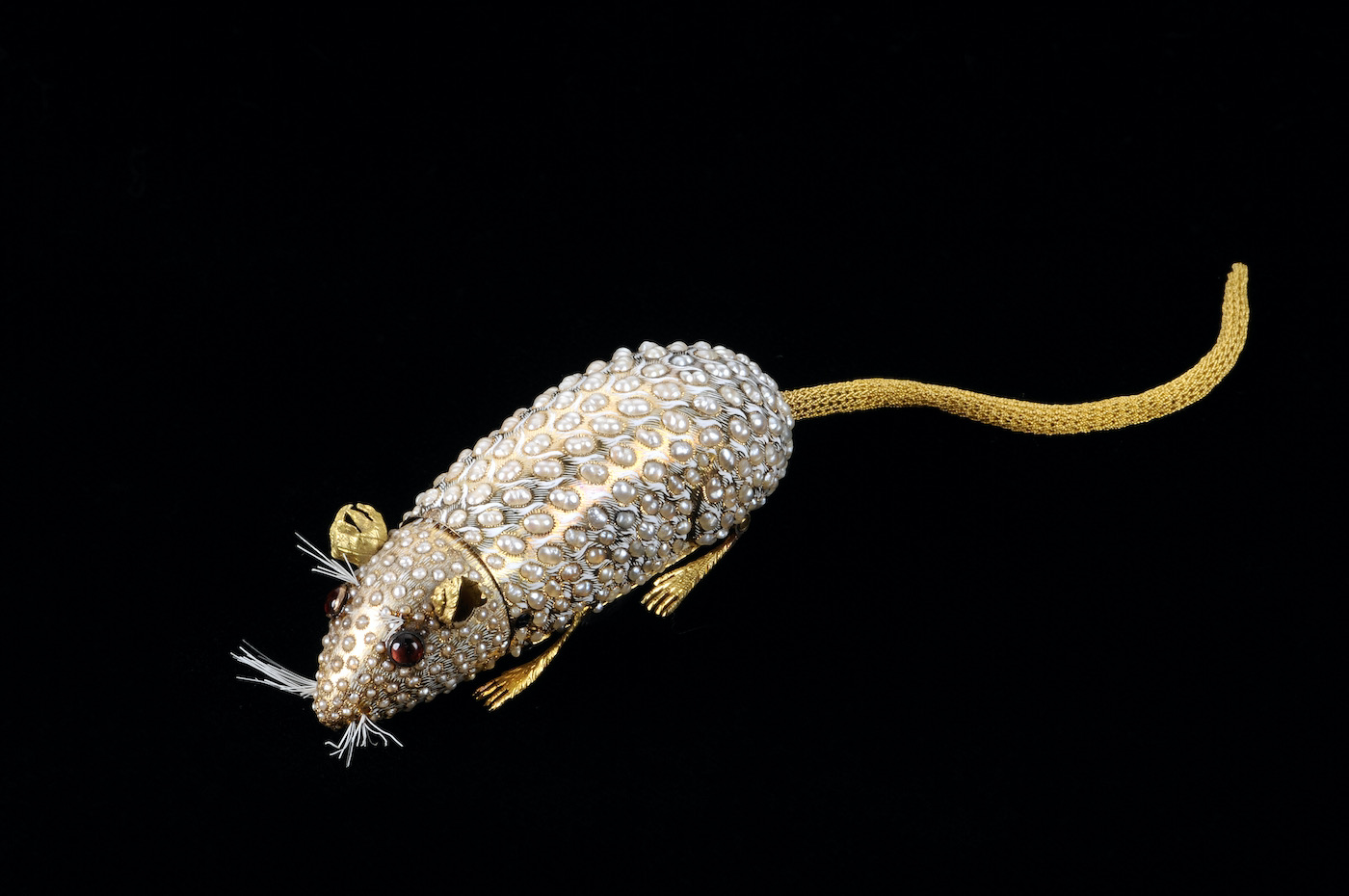 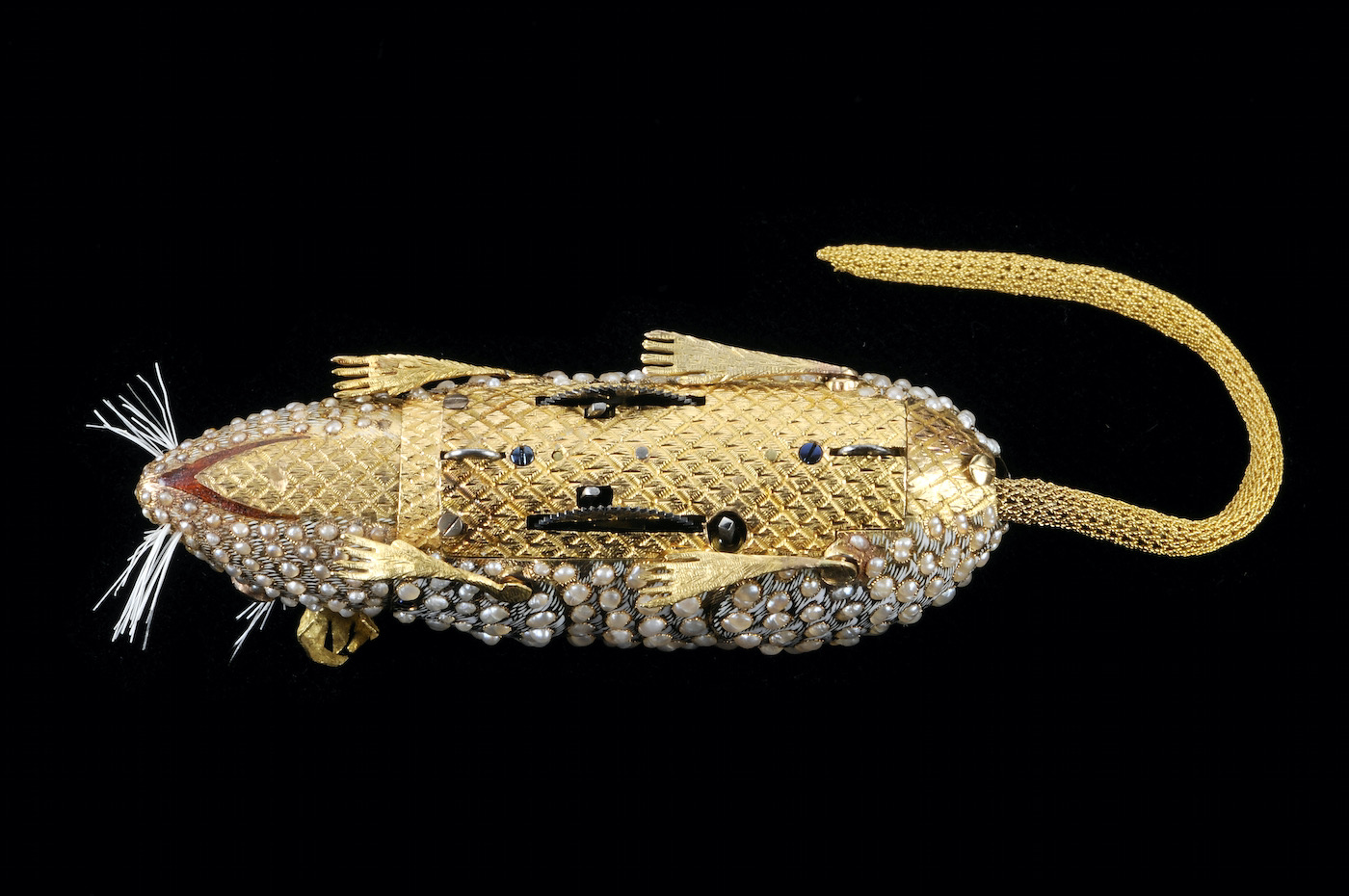 In the late 1970s, Michel Parmigiani’s company, Mesure et art du temps, was gaining an unrivaled reputation for both watchmaking and restoration work while restoring one-of-a-kind pieces for the Musée Patek Phillipe and the Château des Monts. But it was a meeting between Michel Parmigiani and the Sandoz Family Foundation in 1980 that began a decades-long partnership to bring the Sandoz family’s collection of automata and clocks back to life. Indeed, a partnership it truly is, as years of encouragement by the Sandoz family eventually convinced Michel Parmigiani to launch his eponymous brand in 1996. Decades of restoration work by Michel Parmigiani and a dedication to learning from the past clearly shine through in the brand’s current pieces. 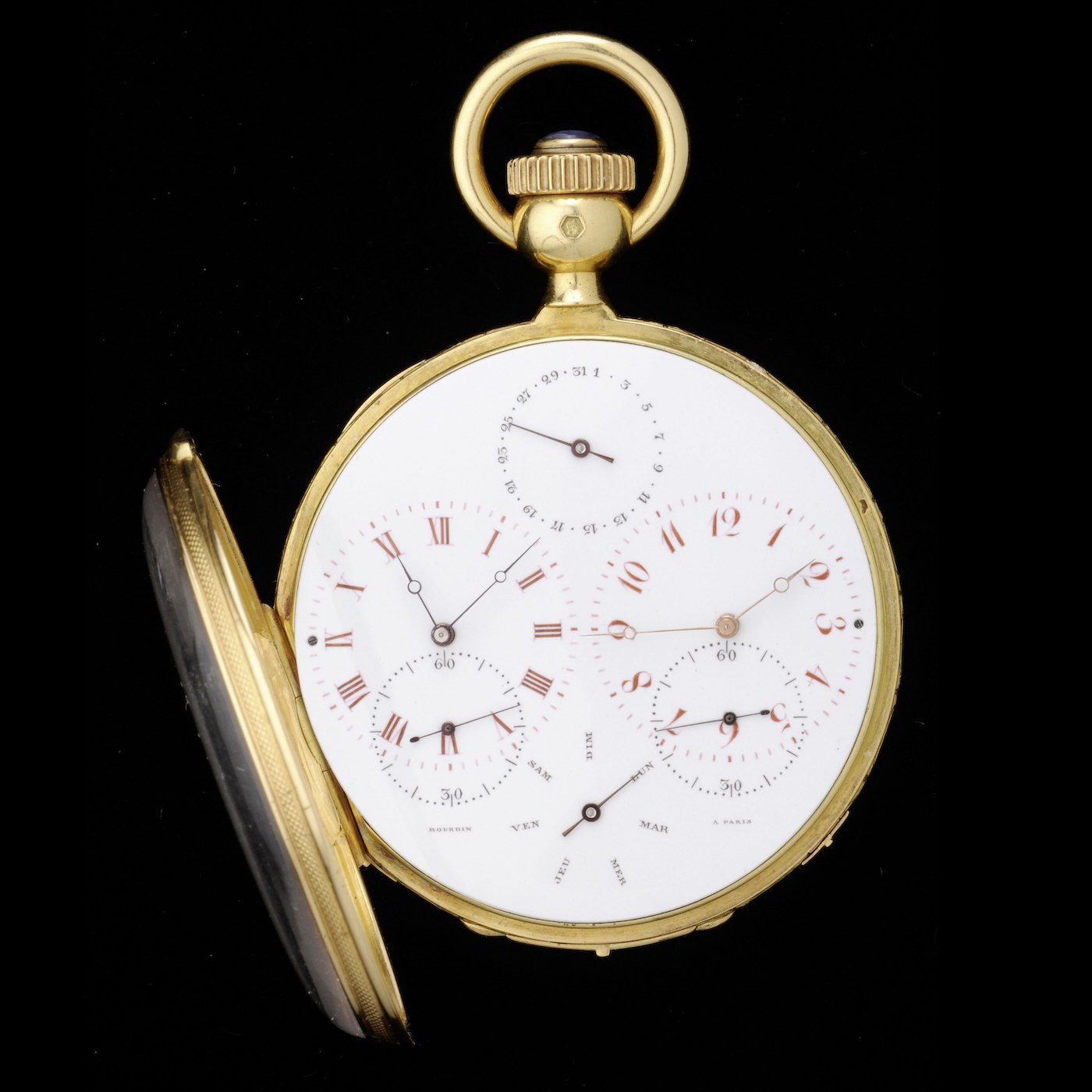 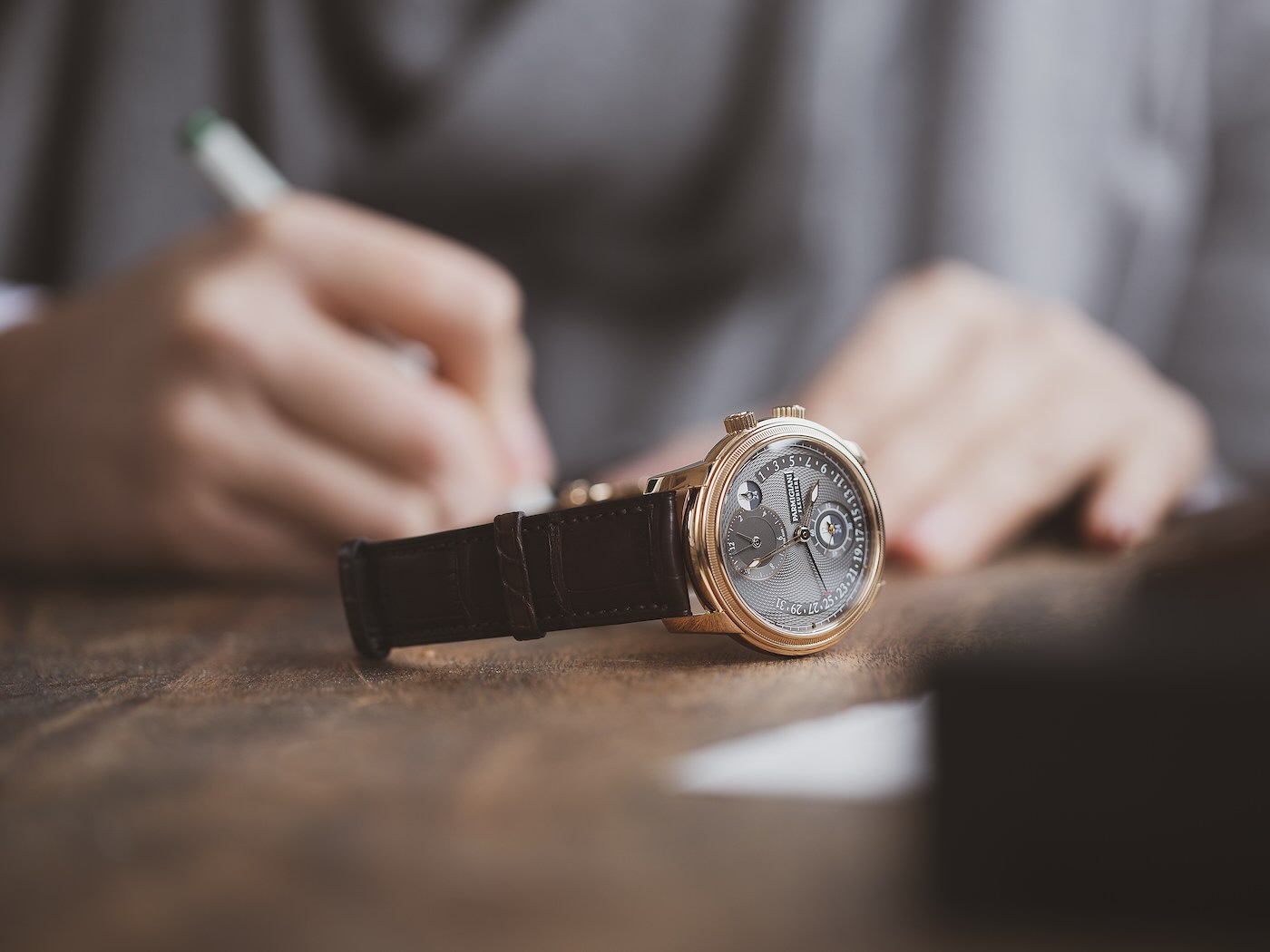 Take, for example, the Toric Hémisphères Rétrograde. This exquisite dress watch with GMT complication was inspired by a pocket watch entrusted to Parmigiani Fleurier’s restoration workshop. The pocket watch contained two movements inside the case, each responsible for its own time zone. This pocket watch motivated Michel Parmigiani to develop an slim and elegant single caliber that controls two separate time zones — one on the main dial and another in a subdial at 12 o’clock. Thus, Parmigiani launched a world’s first complication as a direct result of their commitment to keeping the past alive. While Parmigiani Fleurier has thrived as an independent watchmaker over the past 25 years, the brand has never forgotten the importance of restoration. Celebrating that legacy are three priceless automata from the Sandoz collection, painstakingly and lovingly restored by Parmigiani Fleurier. 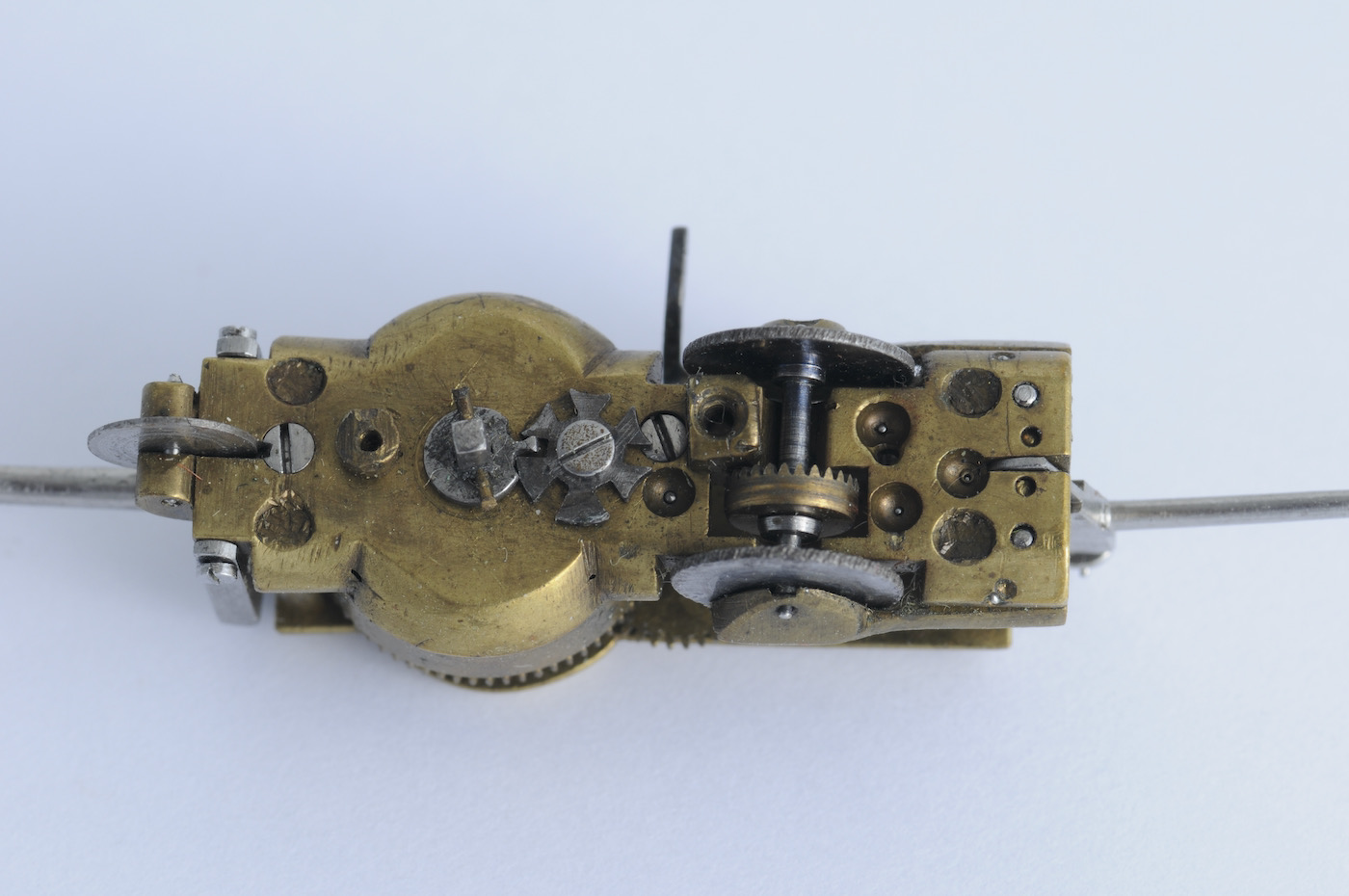 The silkworm mechanism prior to restoration. 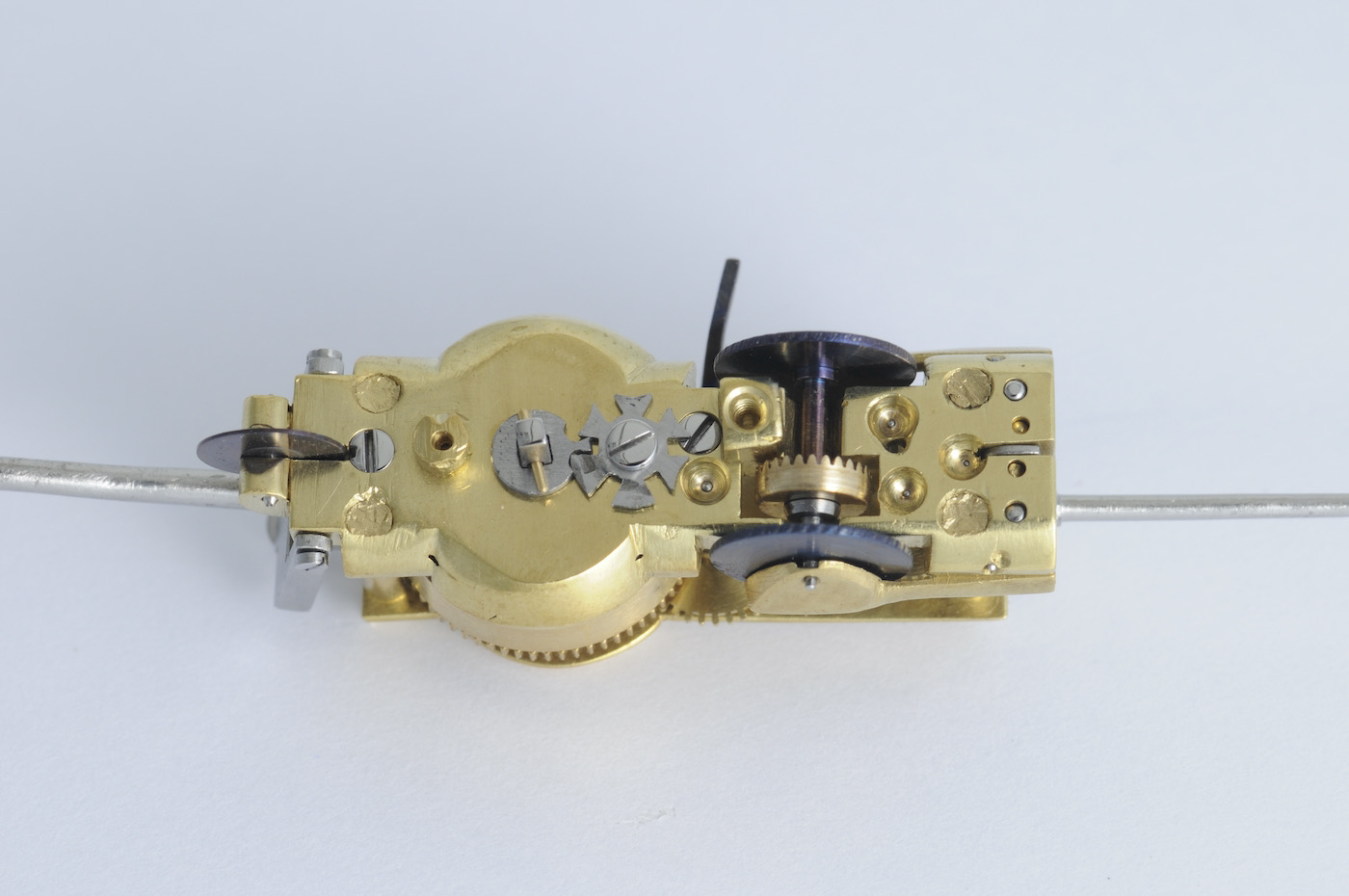 The silkworm mechanism was painstakingly restored.

The creation of automata has a long and fascinating history, with the term originally coined by Homer in reference to these self-operating machines. Perhaps that’s no surprise, as there are myriad examples of automata featured in Greek mythology. However, a fascination with automata seems to be universal, with references in the ancient world found in everything from Jewish legends to Chinese texts. Though we may think of fully articulating humanoid figures when picturing an automata, even the ubiquitous cuckoo clock is a classic example of these fascinating machines. Indeed, the natural world is often the source of inspiration for automata, and the Sandoz collection featured three charming examples of animals originally crafted in the early 19th century and featured here fully restored by Michel Parmigiani. 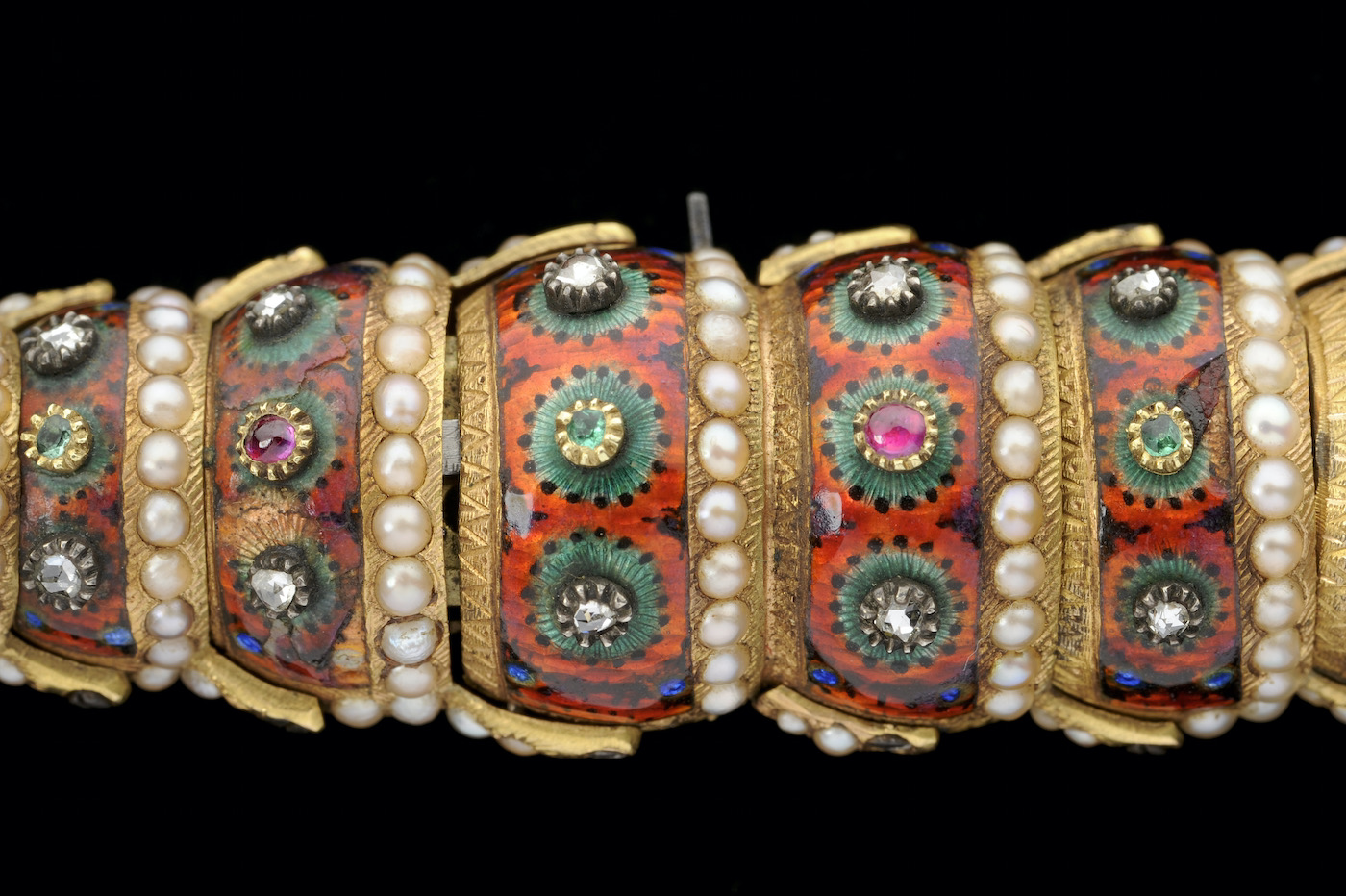 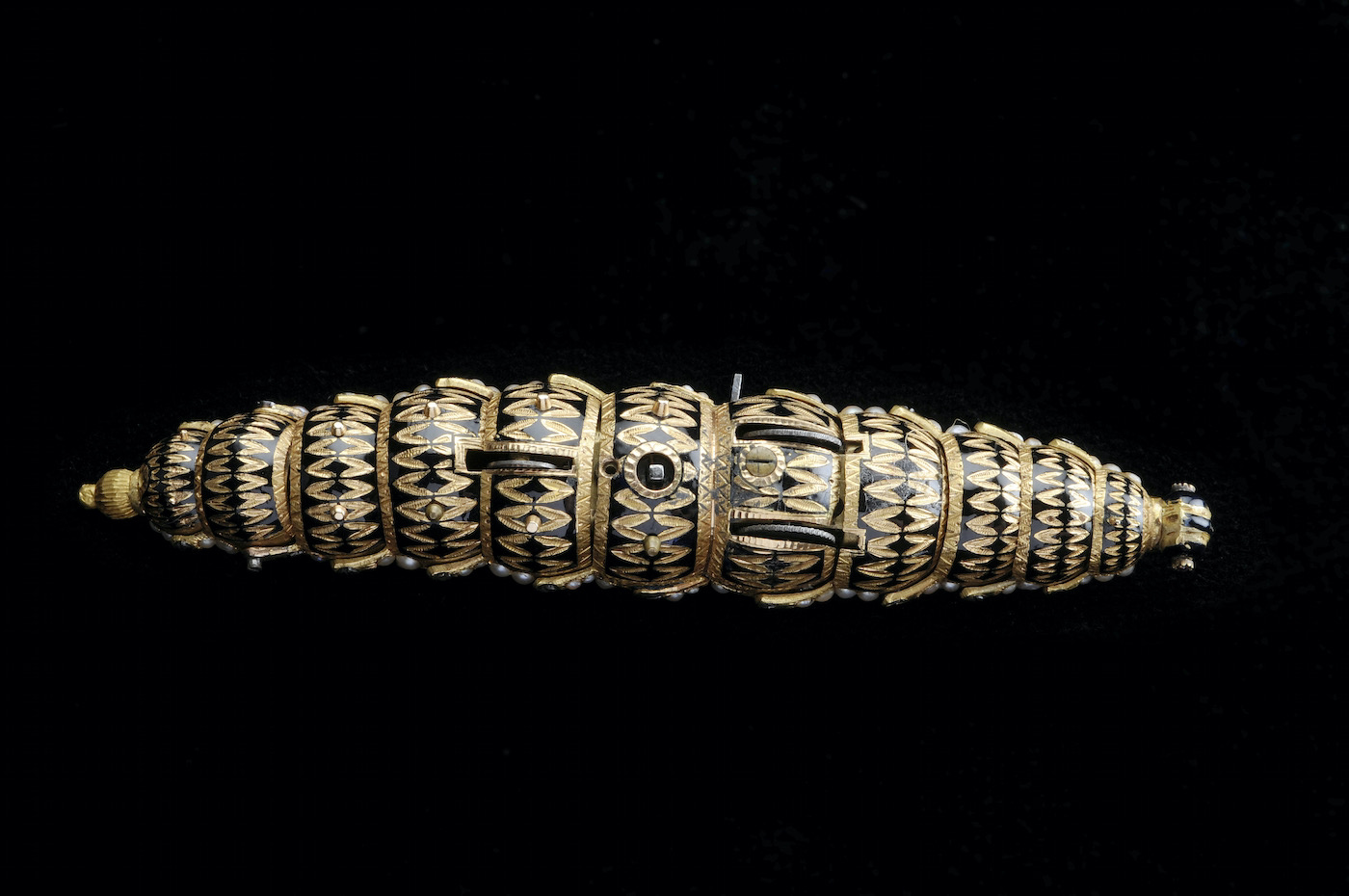 The Mouse: Crafted from engraved gold, the 10.2 cm mouse is decorated with pearls with rubies inset for the eyes. The tail, made from braided gold, actuates the movement. Once actuated, the mouse comes to life, moving a few centimeters before stopping, lifting its body up, and moving its head up and down as if stopping to sniff for a bite of cheese.

The Silkworm: Smaller than the mouse at only 7.5 cm, the silkworm is created with a series of red-enameled gold rings. A closer observation is needed to fully appreciate the detail in this piece, including accents of green and blue, along with inset pink diamonds, rubies, and emeralds. A key inserted into the belly of the silkworm actuates the mechanism, allowing the silkworm to crawl along, moving its head and rear up and down in an incredibly lifelike imitation.

The Frog: Rounding out the collection is the diminutive frog. Measuring in at only 6.0 cm, the frog is crafted from enameled gold in a striking example of the trompe l’œil effect. Rubies and pearls capture the light, playing off the subdued and lifelike enamel. Like the silkworm, a key to the belly actuates the automata — the frog takes several leaps, stops to croak, then performs another series of jumps.

These are works of art that must be seen in motion to fully appreciate. Watching these incredible creations come to life in all their bejeweled beauty makes it easy to understand Michel Parmigiani’s passion for restoring these priceless creations. Parmigiani’s restoration work keeps this history alive while unlocking secrets from the past that help push Parmigiani Fleurier’s horological innovation into the future. To learn more about Parmigiani Fleurier’s restoration work, be sure to visit the brand’s website.