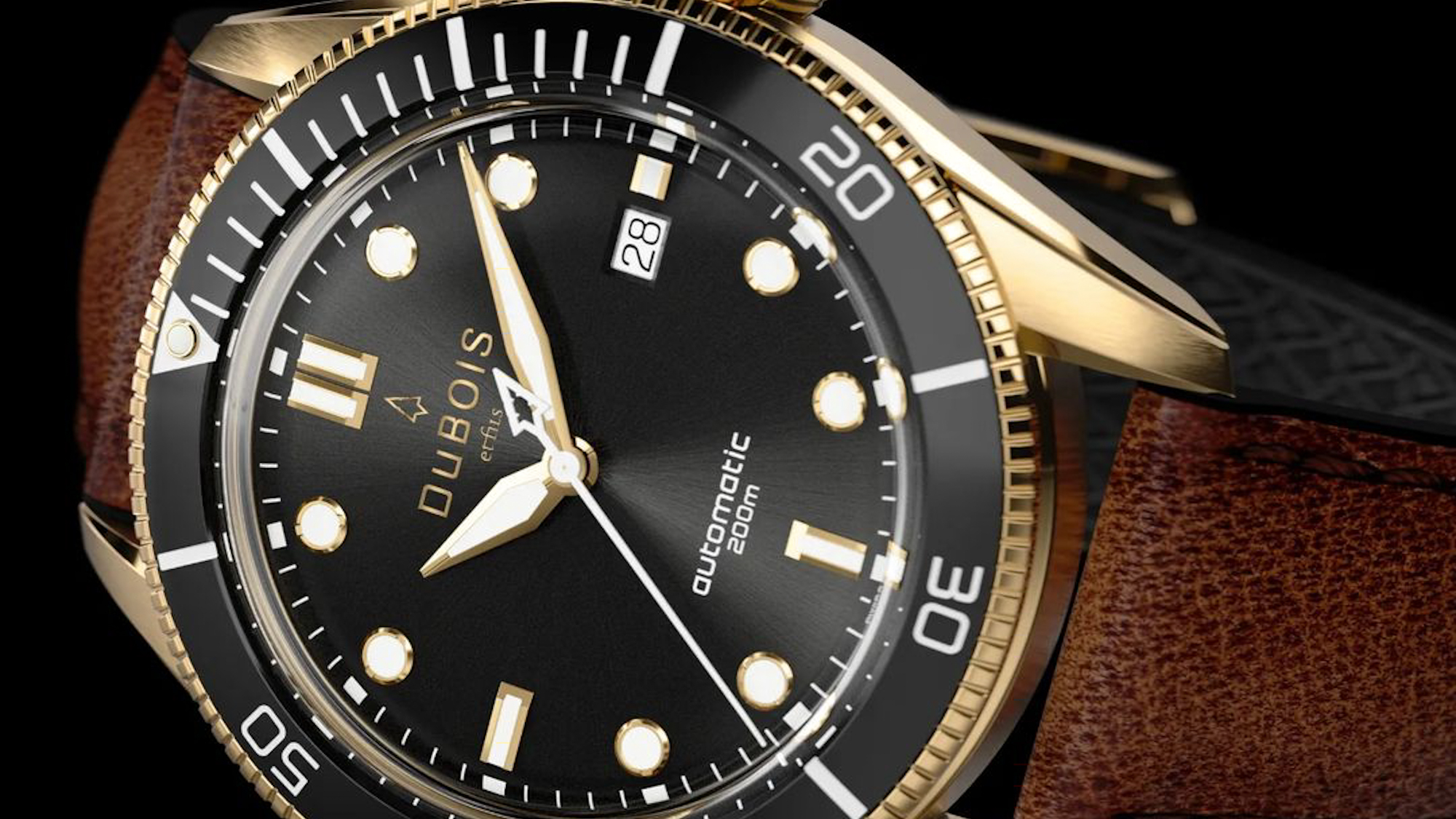 The New Ana-Digi Watch? DuBois Et Fils Bridges Past And Present With The DBF007 Diver Collection

To play a little word association, the words “DBF,” “007,” and “dive watch” likely bring to mind a certain dashing secret agent in an Aston Martin. And while, yes, there’s lots of overlap with the world’s most famous spy, today’s alternative is even more intriguing. Meet the DBF007 collection of dive watches, a product of DuBois et fils, “the oldest watch factory in Switzerland.” The DBF007 presents as a classic diver, yet just beneath the surface lies a movement that is at once in contact with both the horological past and our digital future, which makes it one of the most interesting watch stories of the year. 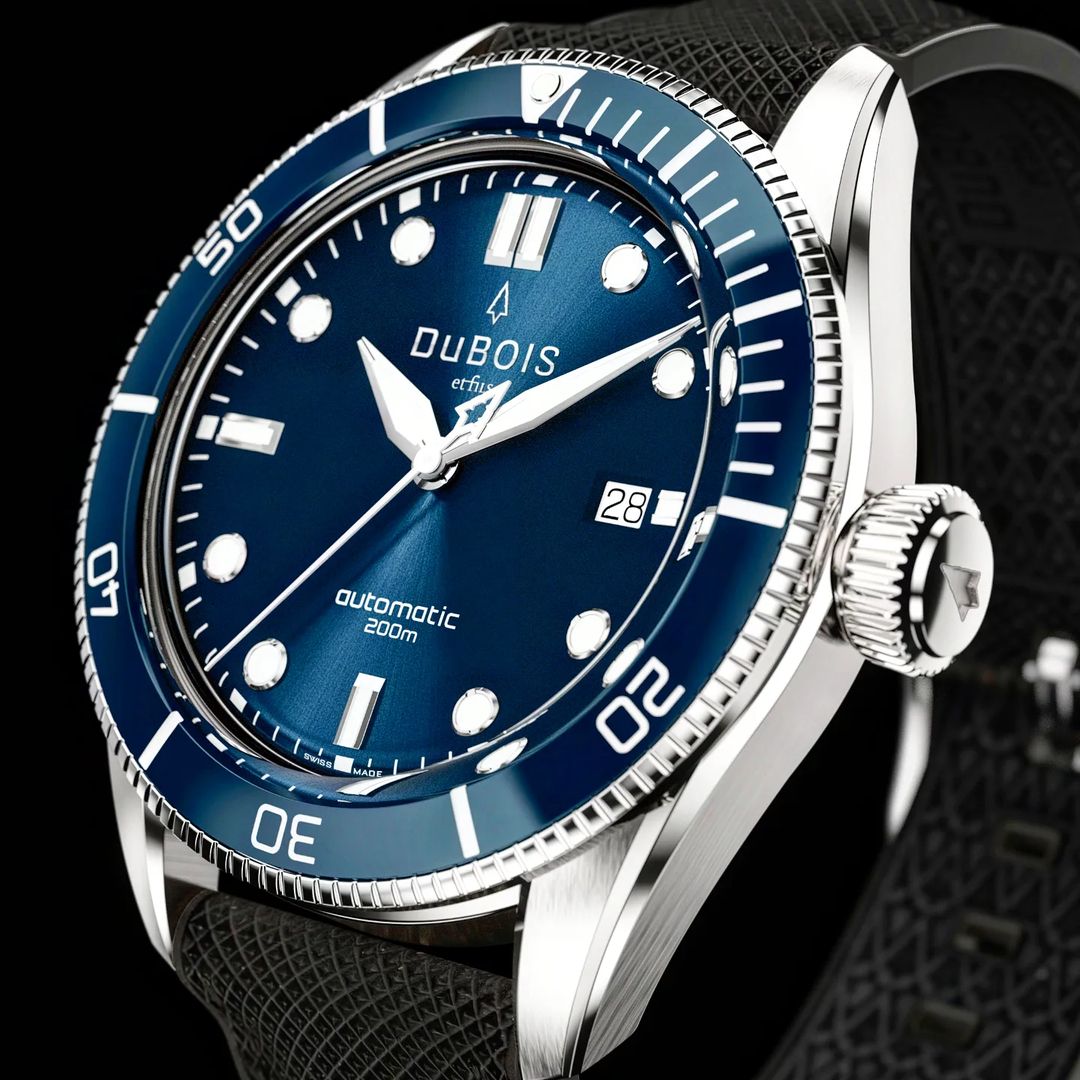 Producing timepieces since 1751, DuBois can claim to be one of the world’s oldest watchmakers. The early 20th-century marked the family-owned company’s first wristwatch, but toward the end of the century, the last DuBois descendant sold the company. The outfit changed hands a couple of times until Thomas Steinemann, formerly of Fossil Group, raised the requisite funds to lead the Le Locle-based institution into a new chapter in 2010. Several years later, while Kickstarter was just breaking out of its crib, DuBois et fils started its first equity-based campaign, likely making it the first crowdfunded luxury watch. As ABTW founder Ariel Adams wrote in 2018, “E-commerce is just the beginning for DuBois et fils. Through its website, you can buy watches, pre-order watches, rent watches, and even buy shares in the company.” In 2022, this kind of innovation shines through in a new way with the DBF007. 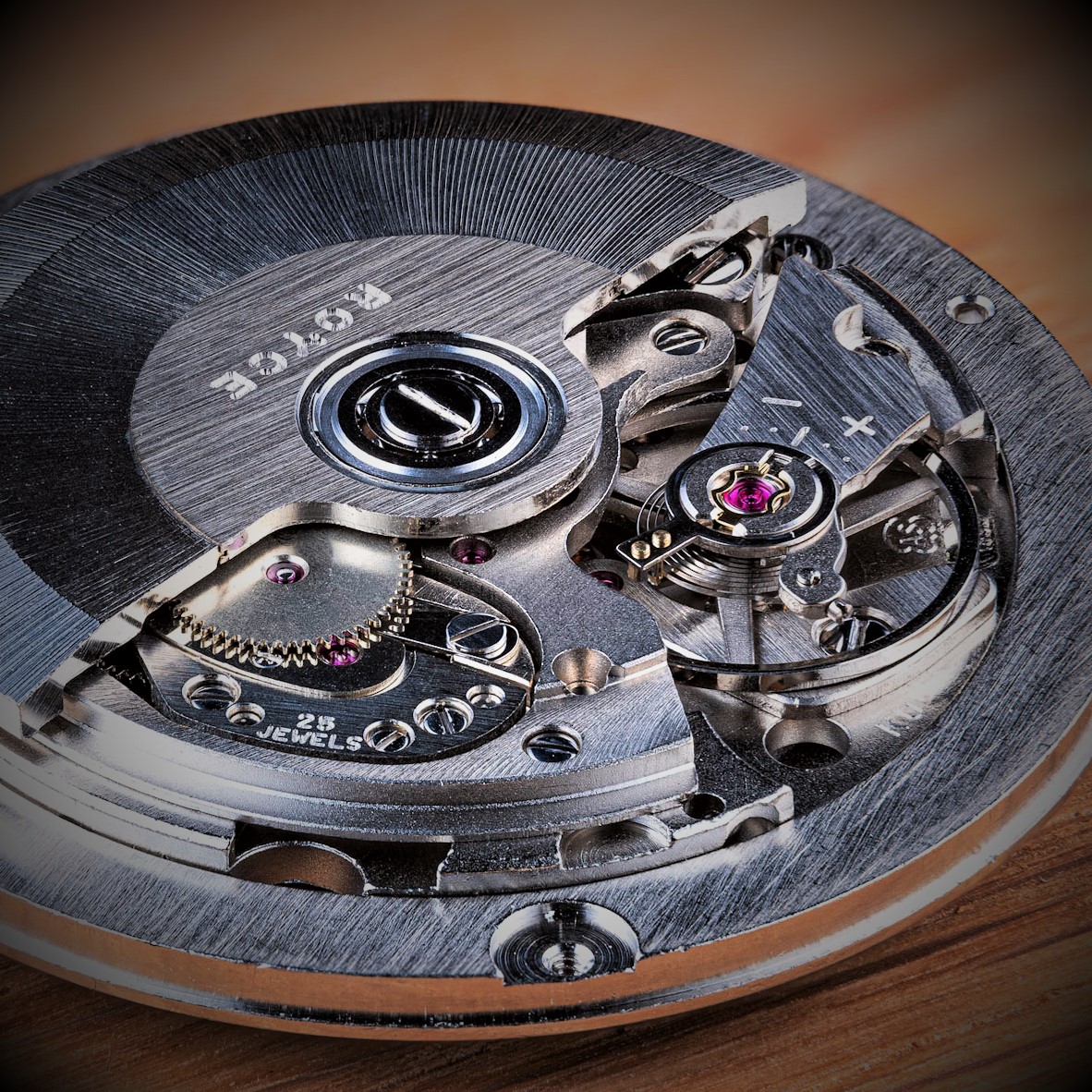 Setting aside, for now, the specs and appearance of the DBF007 (we’ll get to that in a moment), the movement inside deserves an article all its own, both because of its heritage and its intriguing digital legacy. The AS-1895 caliber movement is a product of Adolf Schild, head of the eponymous A. Schild SA, headquartered in Grenchen. Schild crafted movements for dozens of Swiss watch brands, and the AS-1895 emerged from “Assa’s” factory sometime in the 1950s or 1960s (the exact date is unclear), and with a 42-hour power reserve and “Incabloc” shock protection system, the automatic caliber — if built today — would surely be referred to as a workhorse. While production of the AS-1895 movements has long since ceased (A. Schild SA first merged with A. Michel AG and FAF to form Ebauches SA in 1926, which subsequently merged with ETA during the Quartz Crisis), the legacy lives on. A batch of new old stock movements — 330 to be exact — recently found daylight at the hands of DuBois et fils’ watchmakers. Fully restored to working condition, these 60+-year-old movements now constitute the heart of each DBF007. 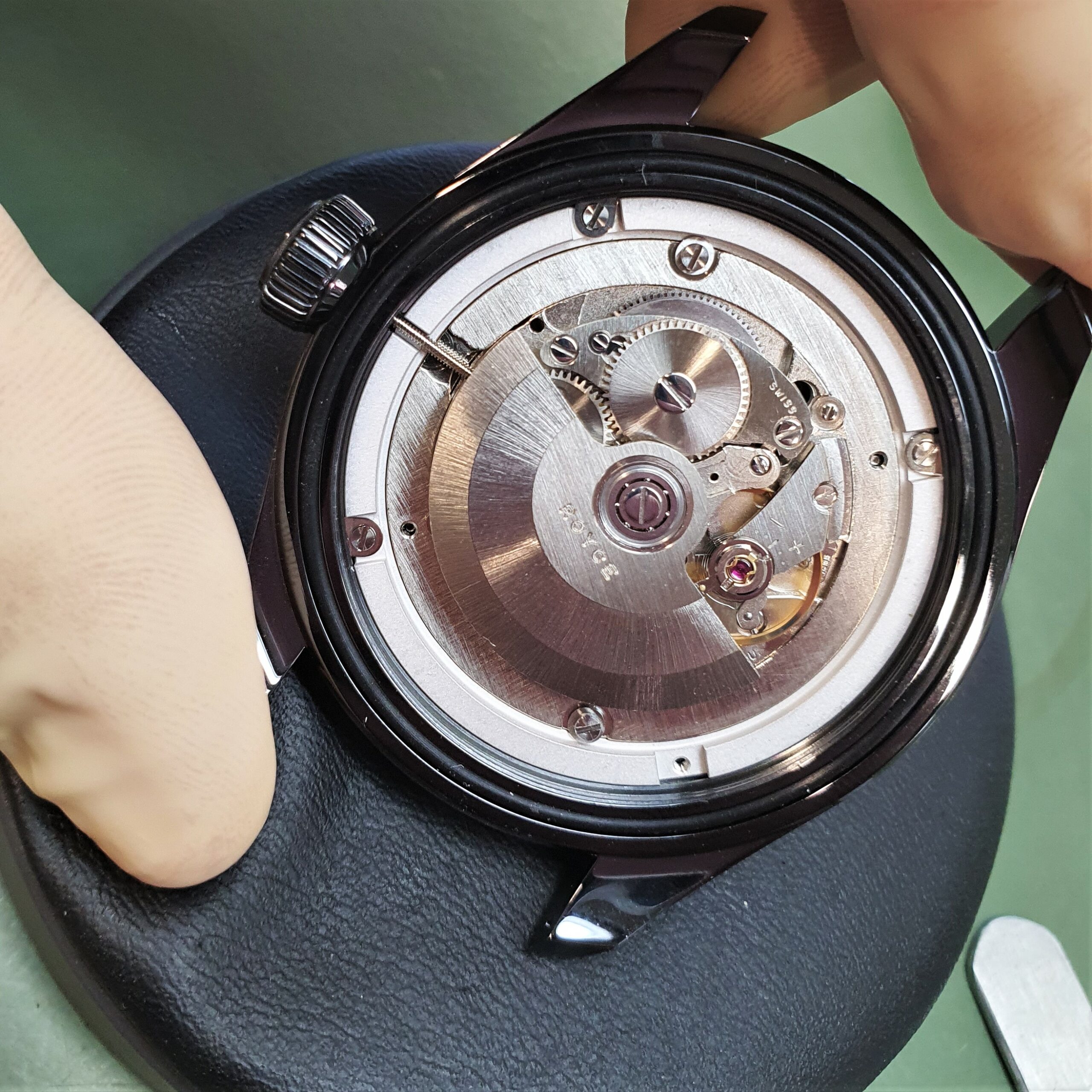 The movement’s story doesn’t stop there. In true DBF fashion, these heritage movements have another trick up their sleeve.  Each movement has been uniquely identified, transferred to the blockchain, and linked to a virtual token. A feature du jour for luxury watch brands, blockchain technology (for those who don’t know) appears to be the next evolution of ownership tracking. In an era when a watch’s lineage can significantly influence its resale value, it’s helpful to have an open record of the watch’s history. Surely, this duality is not lost on DuBois et fils. Movements that languished for years in sealed boxes, transferred between owners who likely didn’t even know of their existence can now have their custody tracked, almost in real-time. Practically speaking, blockchain technology comes with several benefits. Watch collection stolen in a home burglary? Mark your watch as stolen in the ledger registry to nerf the thief’s ability to resell it. Then, submit the ledger proof of purchase to your insurance for ironclad evidence that you were the original owner. Selling the watch later on? Your ledger entry showing you purchased it directly can build confidence with potential buyers. As time goes on, we’ll see the full spectrum of benefits (and yes, drawbacks) of horological blockchain tech, but it takes brands like DuBois et fils to blaze the trail. 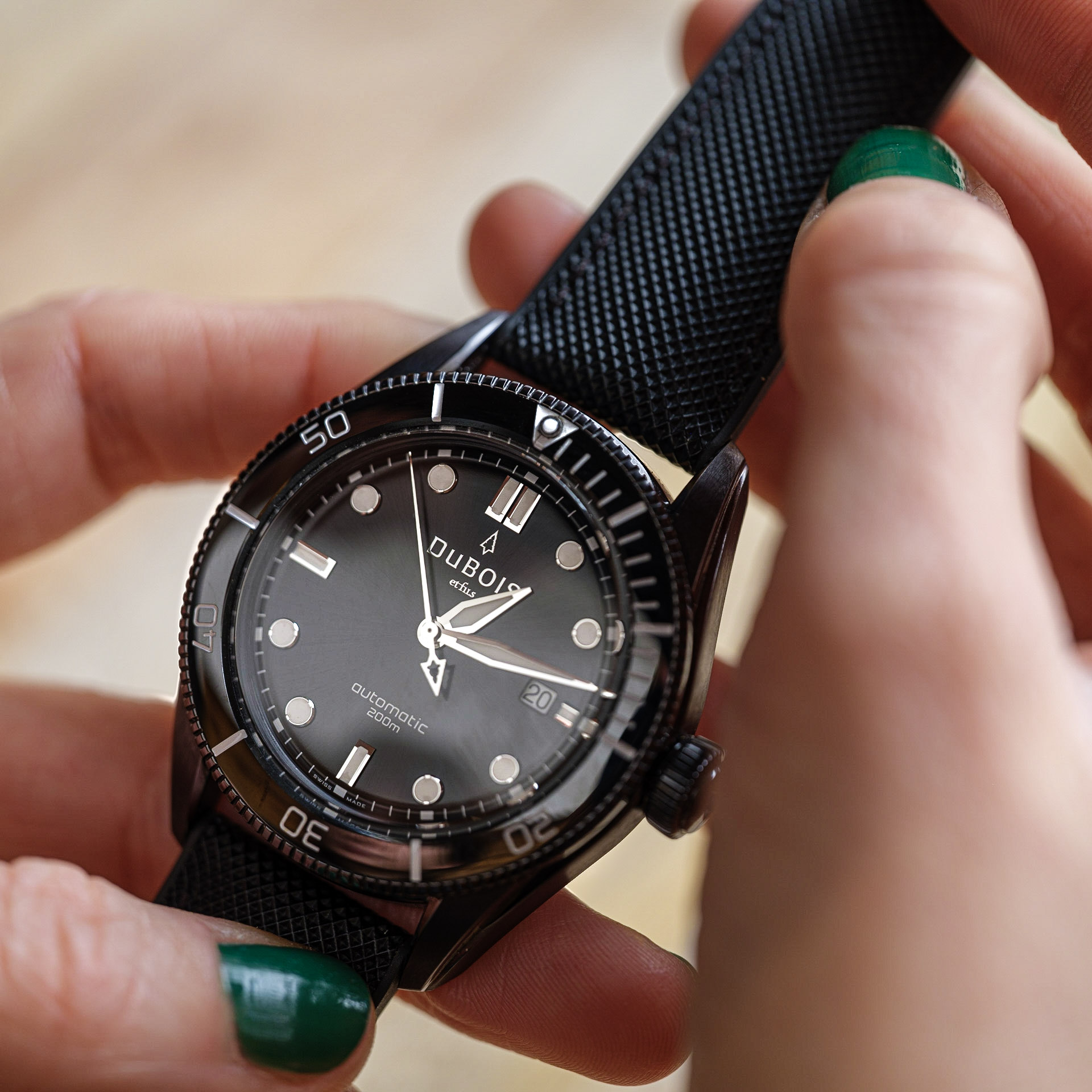 Of course, the DBF007 is more than a movement. Proud of its Swiss Made label, the DBF007 is truly a product of Switzerland with the movement, case, and dial all produced 100% at home. With 12 discrete references in the collection, there’s plenty of variety simply within the 44mm case options, including steel (both polished and brushed), bronze, PVD steel, and even a 5N red gold-coated steel variant. Dials of green, blue, black, white, and brown are color-matched to the unidirectional rotating ceramic bezel while Super-LumiNova hands and indices assure the DBF007 maintains its chops as an actual dive watch. To that end, the 20ATM water resistance (thanks to a screw-down crown and solid caseback) means this is a luxury diver that’s unafraid of the sea. 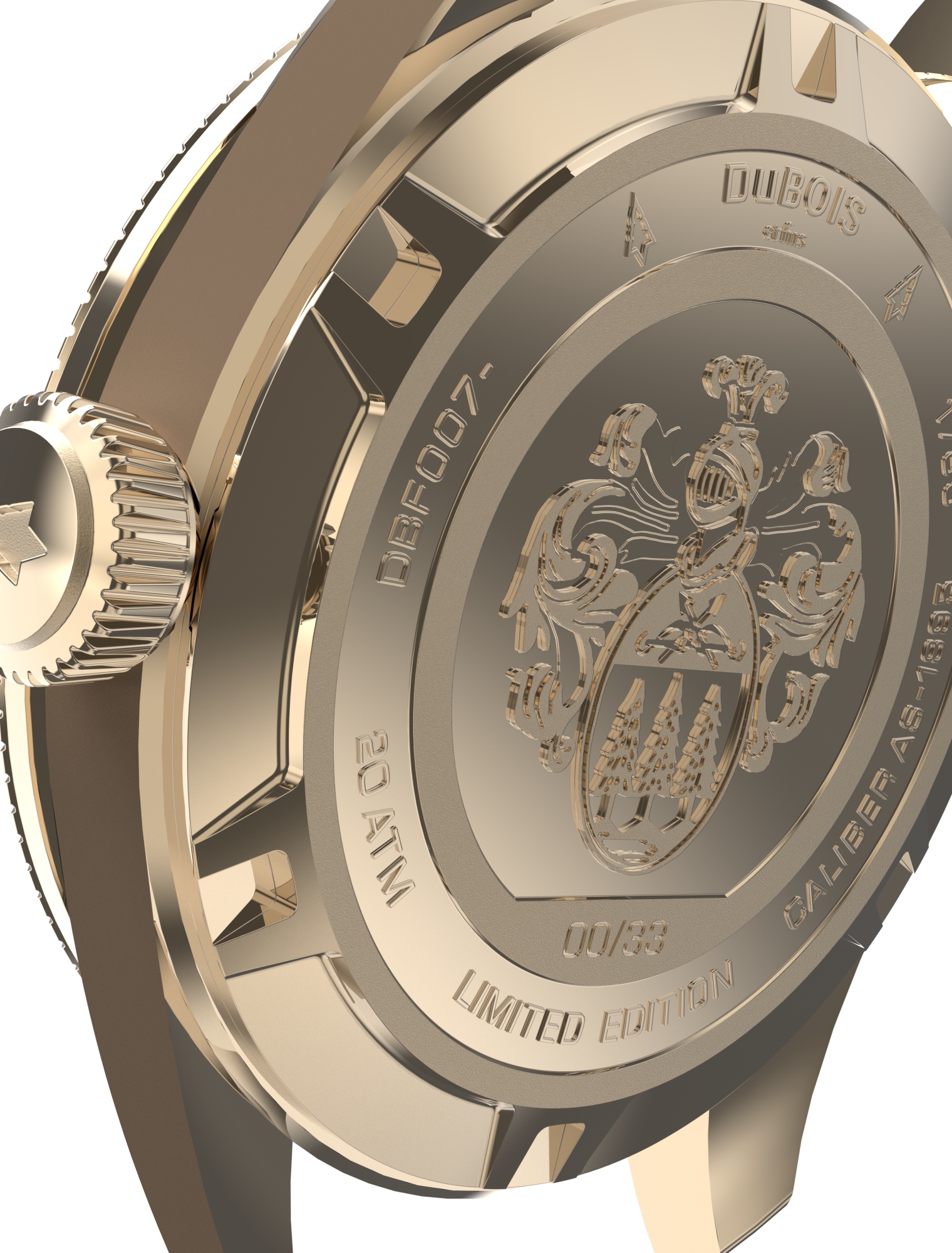 Speaking of the caseback, we applaud DuBois et fils for resisting the urge to slap an exhibition caseback on a diver in order to show off the heritage movements inside. It hails from an era where things when movements were made to be used, not so much as seen nor heard. Instead, the caseback features the DuBois et fils family coat of arms, harkening back to the brand’s earliest days. 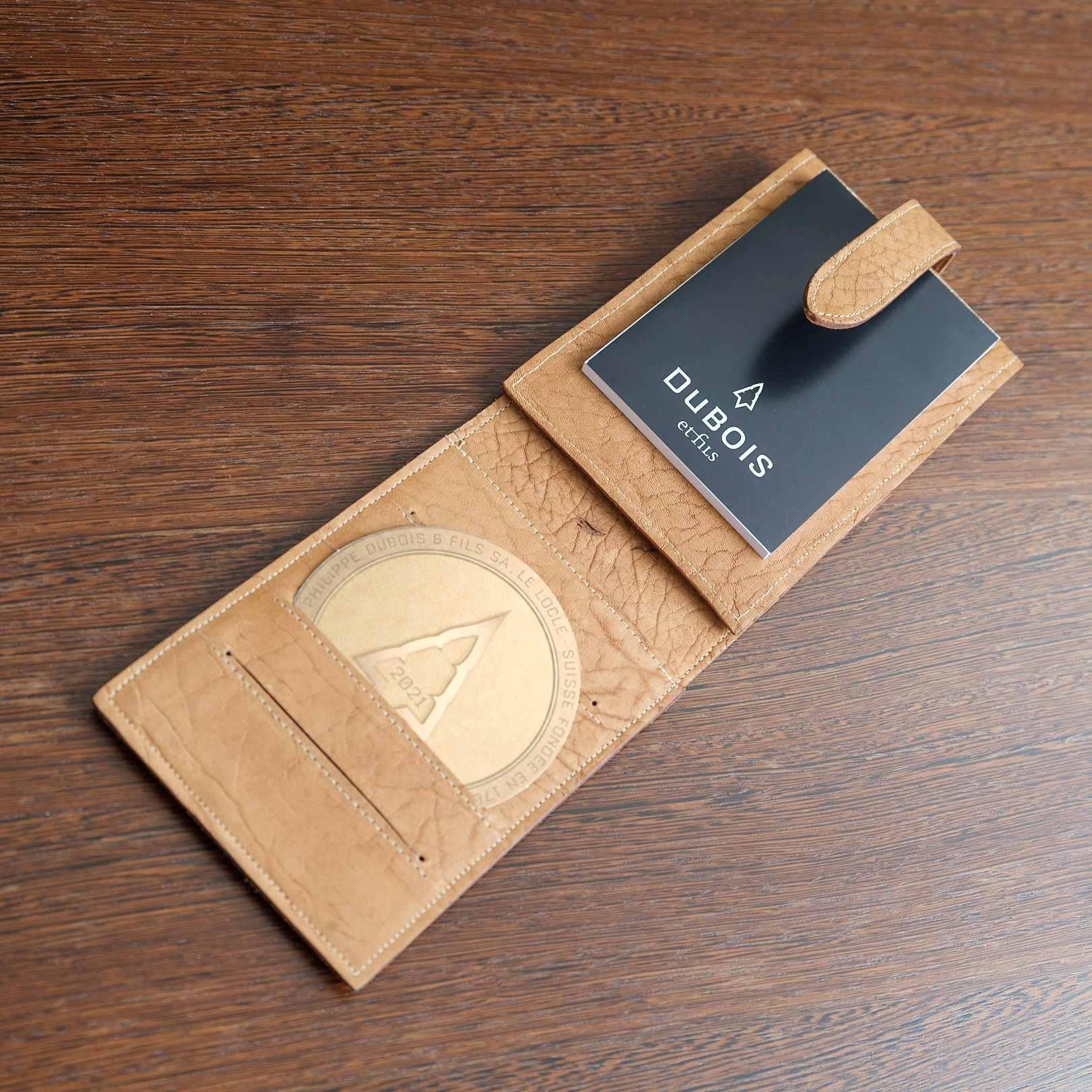 Each watch is part of a limited edition of as many as 33 or as few as 22. With quality and attention to detail setting the tone, the price is reflective of the small product runs, heritage, and overall character of the DBF007. Prices start at 5,500 CHF and are available on DuBois et fils site. Each DBF007 watch ships with a handmade leather pouch made from ethically hunted Swiss game.