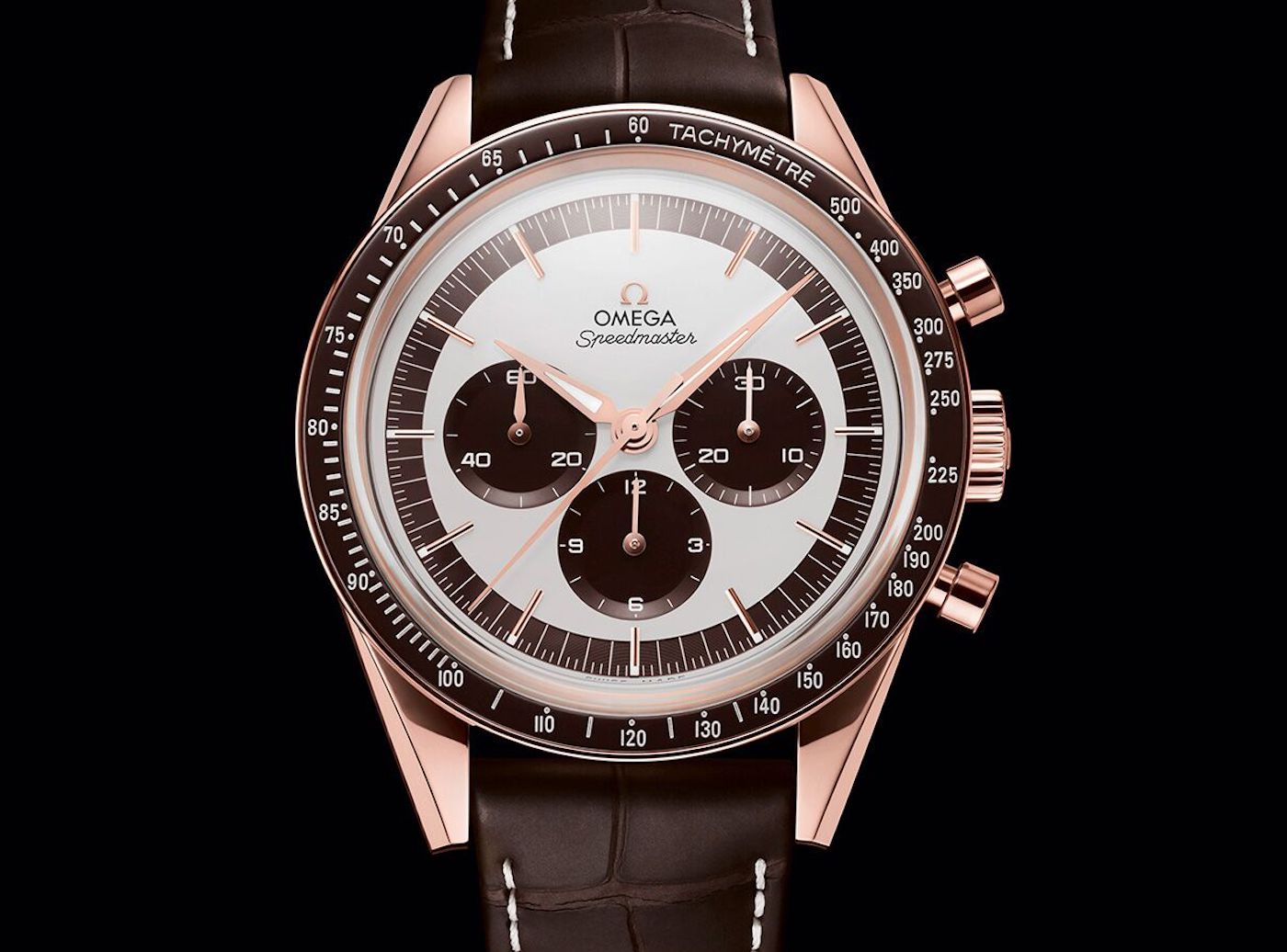 One of the coolest, most exclusive clubs in the world of watchmaking just got some new members. Legendary astronaut Buzz Aldrin, mad genius/tech guru/effervescent entrepreneur Elon Musk, musical wizard Brian Eno, and the makers of the Apollo 11 documentary are the latest recipients of the Stephen Hawking Medal for Science Communication. In addition to that esteemed award, the chosen few will also receive an exclusive Omega Speedmaster Professional “Starmus” watch. 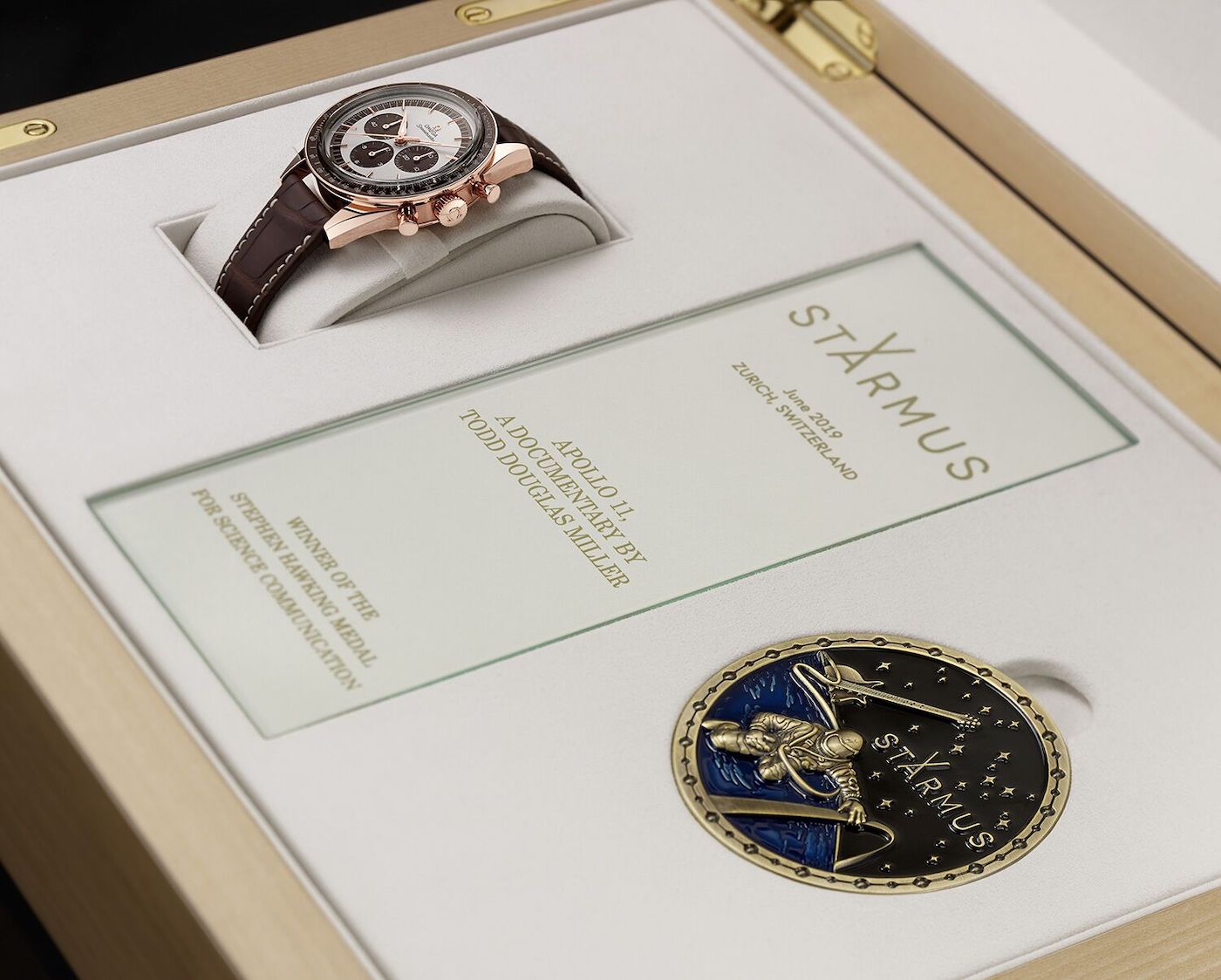 The Starmus Festival, held in Zürich this year, brings together globally recognized luminaries from the scientific, artistic, and film communities. Since 2016, the Stephen Hawking Medal for Science Communication has been presented to a handful of individuals that have, through their tireless endeavors, enriched the lives and minds of the general population. 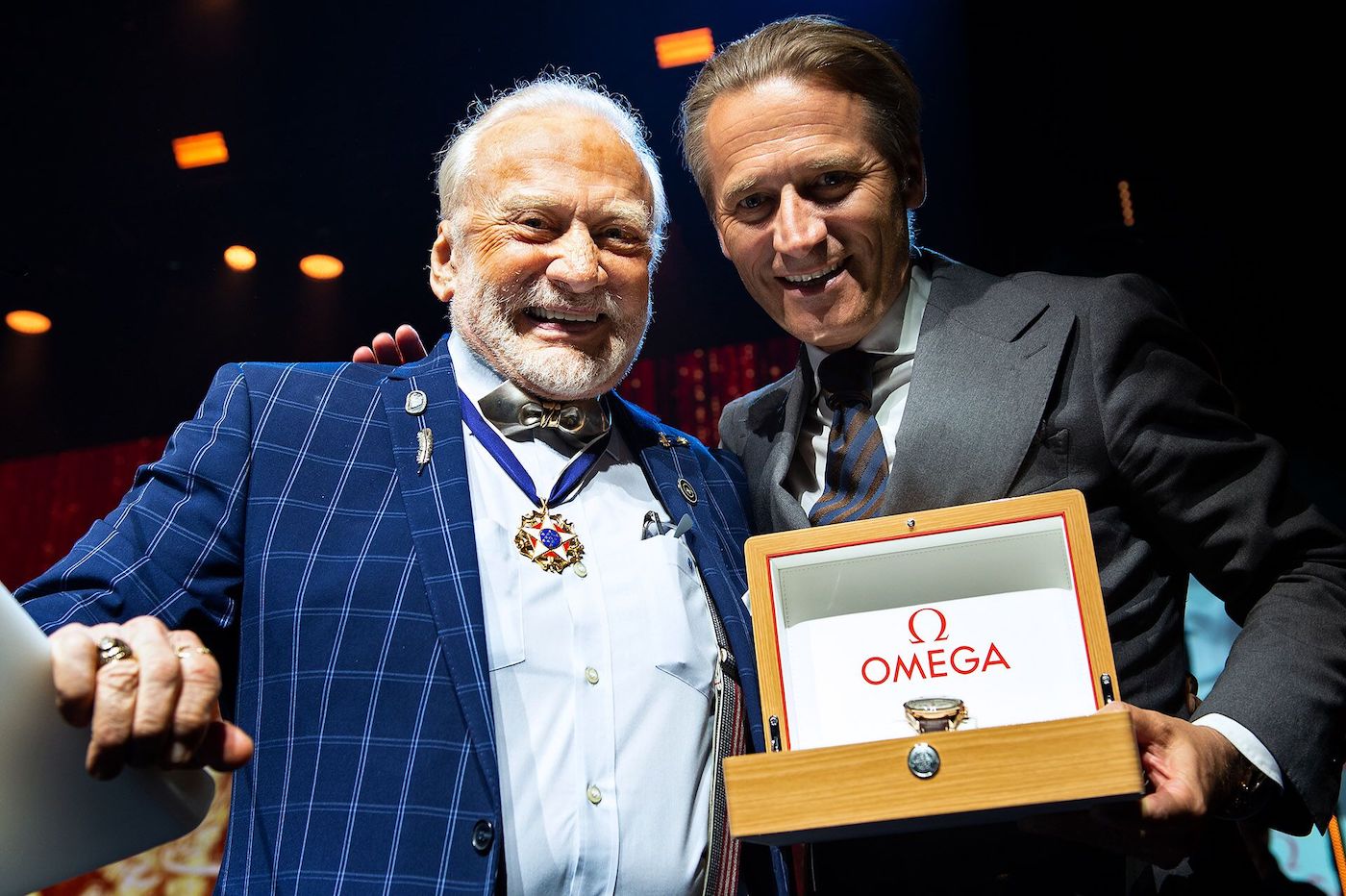 Upon presenting the first medals, Professor Stephen Hawking summed up the winners’ contribution and importance with the following words: “By engaging with everyone from school children to politicians to pensioners, science communicators put science right at the heart of daily life. Bringing science to people brings people into science. This matters to me, to you, to the world as a whole.”

Since 2017, Omega has supported the event and gifted the honorees with a special Speedmaster. In light of the fact that a ceremony was not held in 2018, 2019 marks only the second time a group has received the Omega Speedmaster Professional Starmus watch. 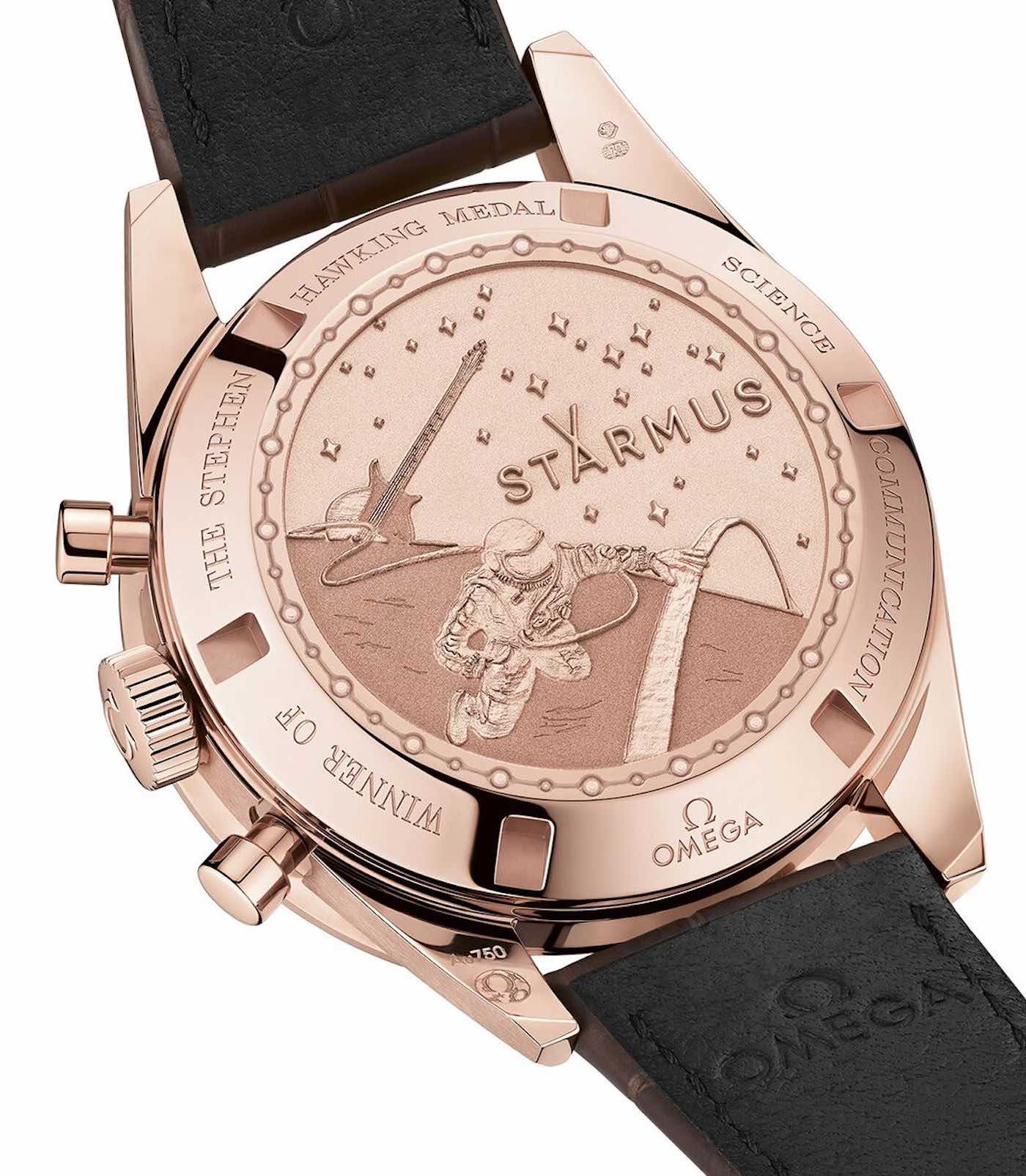 The design of the medal is mirrored on the caseback of the exclusive Speedmaster (although the caseback is not colored as the medal itself is). Featuring the image of a cosmonaut (Alexei Leonov, to be precise) and the “Red Special” guitar owned by and associated with Brian May of Queen, the medal embodies the diversity of wonder and pays homage to very different, however similarly inspirational, fields. Both men were instrumental in bringing the award to life.

Previous recipients of the special Omega watch in 2017 were musician Jean-Michel Jarre, astrophysicist and science author Neil deGrasse Tyson, and the creators and cast of the long-running TV series The Big Bang Theory. As you can see from the photo below, the inaugural timepiece was starkly different from this year’s model. 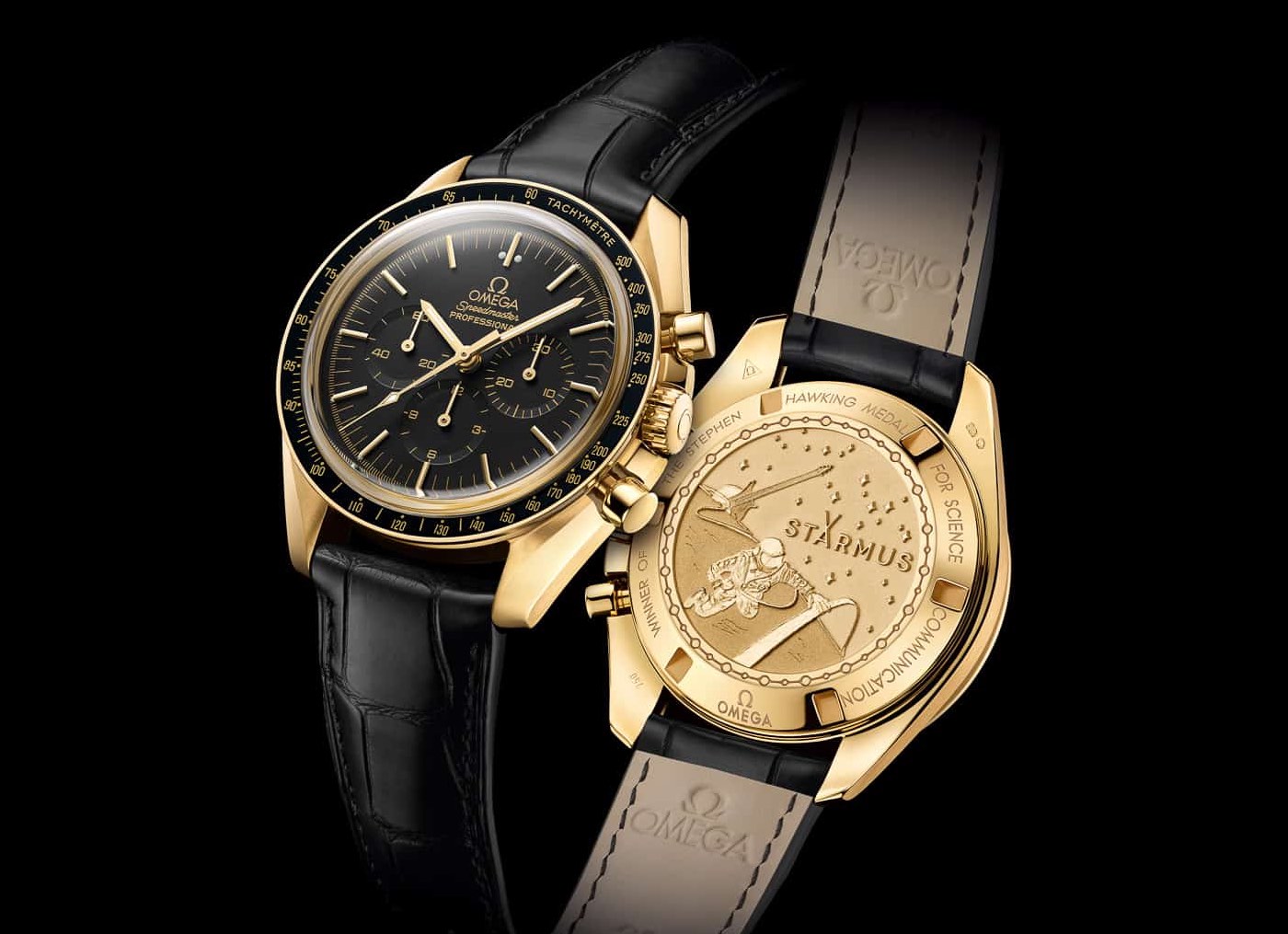 This year’s winning crew will receive a very special Speedmaster Moonwatch crafted in 18K Sedna™ gold. The new piece is based on the model known as the “First Omega in Space” — the storied watch strapped to Walter Schirra’s wrist during the Sigma 7 mission of the Mercury program in 1962. It is aesthetically almost identical to the Omega Speedmaster “First Watch in Space” in Sedna™ gold launched back in 2015, bar the exclusive caseback. Somewhat strangely, that “FOIS” model was classed as a Moonwatch by Omega, despite being different from references 105.012 and 145.012 — the two watches to actually make it to the surface of the moon. While a divisive model among the purists, the gold version of the “FOIS” certainly piqued the interest of many Speedy hoarders, and I imagine this model will do the same. This special edition Starmus is also classed as a Moonwatch in the Omega nomenclature, as are many other Speedmasters (such as the Dark Side of the Moon), which bear very little resemblance to the watches purists regard as worthy of the moniker. 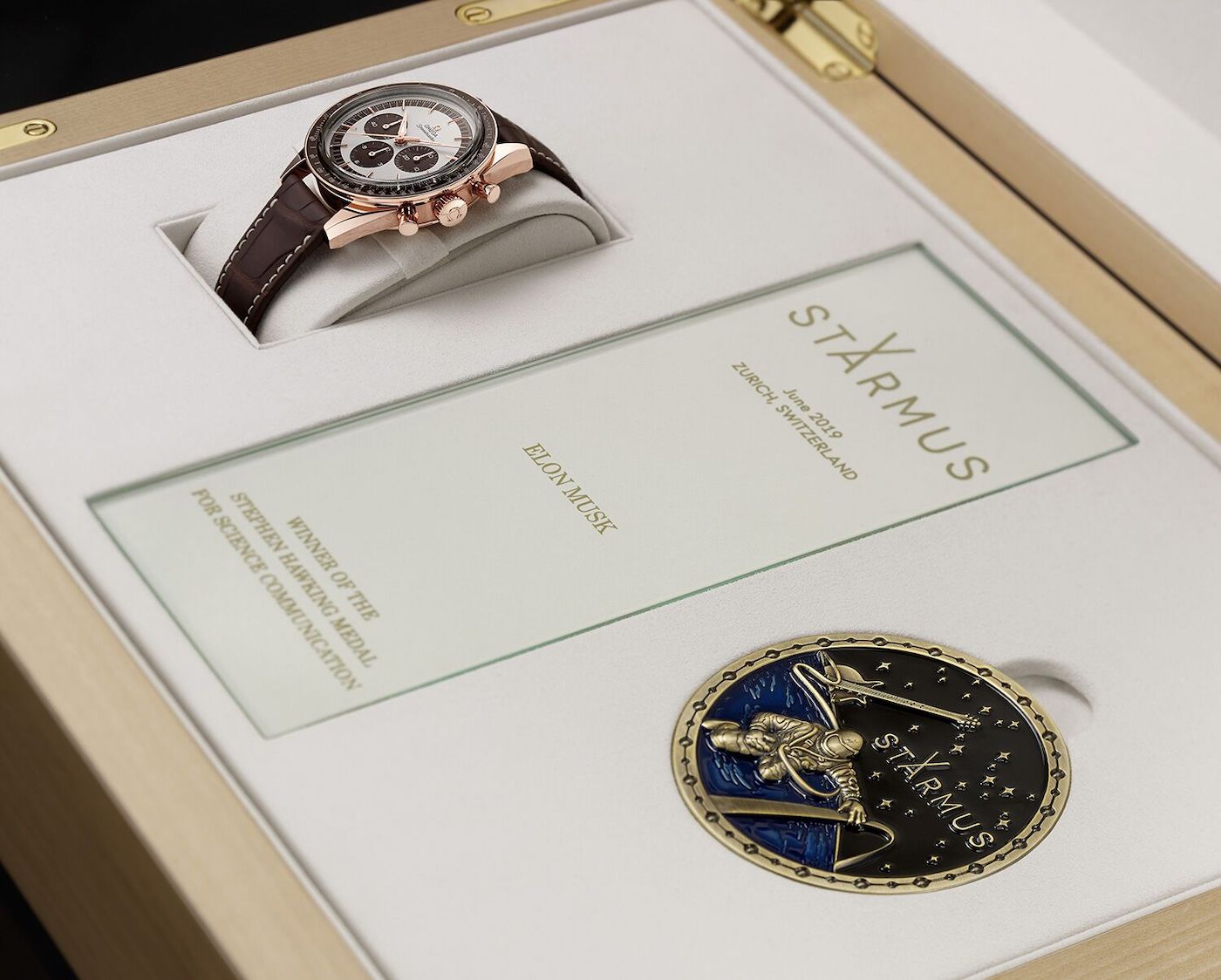 The 2017 Starmus model measured 42mm, but this model is the same size as reference 311.63.40.30.02.001 from 2015 (39.7mm). This iteration of this iconic timepiece features a brown polished ceramic bezel ring and a matte chromium nitride tachymeter scale. Along with the Sedna™ gold case, these warm elements marry nicely with the brown PVD sub-dials. The center of the dial is a contrasting opaline silver.

President and CEO of OMEGA Raynald Aeschlimann presented the award, saying “It’s a great honor to be here amongst so many esteemed names in the science community. I know these winners are truly deserving of the medal, and they have all shown a great commitment to human understanding and progress. OMEGA has its own pioneering history and future in space, so we are thrilled to join the celebrations and share in this common quest for excellence.”

Eno was chosen for the honor for his contribution to the popularization of science; Musk, because of the strides made in Space travel through his SpaceX company and other pursuits; Todd Douglas Miller, for being the man behind the stunning Apollo 11 documentary that shined new light on the realities of space exploration; and a Lifetime Achievement Award went to OMEGA ambassador Buzz Aldrin, who continues to inspire people around the world to reach for the stars.

And given the significance of 2019 as the 50th anniversary of Aldrin and Armstrong’s successful moon landing (shout-out to Michael Collins for picking them up when they were done landscaping Alan Shepard’s future golf course), this event is one that will be remembered. As such, the guest list was predictably glittering. Attendees included Omega ambassador Charlie Duke (the youngest person to walk on the moon), veteran astronaut and Omega ambassador Nicole Stott (known for her work on the International Space Station and the Space Shuttle), and a whole host of Apollo astronauts who are to thank for those remarkable memories made way back in 1969.

Although it is unlikely any of these pieces will hit the open market for quite some time, Omega’s partnership with Starmus will surely foster a fervent interest among collectors in the future, especially given the amazing lives, stories, and careers behind the creation of each timepiece. To learn more about Omega’s history and involvement with space exploration, please visit omegawatches.com.