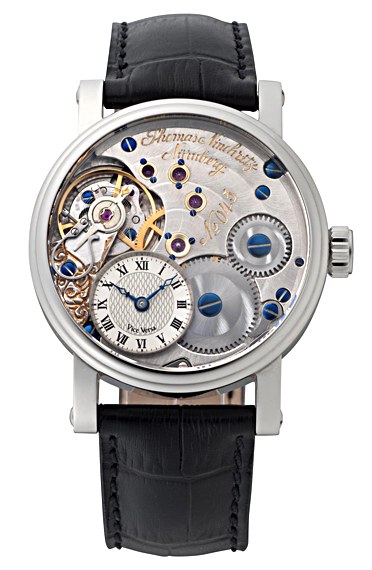 The reason this watch is called the Vice Versa should be pretty clear. Thomas Ninchritz took an ETA Unitas 6498 manually wound movement and was able to mount it backwards on the watch. He calls this his Caliber TN 203. At the same time, he was able to move the watch dial so that it is located in an smaller, off-centered position… on what would be the rear of the watch. So what you are left with is a timepiece whose dial is the rear of a heavily modified Unitas 6498 which has been highly decorated, and has a small watch face on the dial.

Appeal here is not only in the unique “adjustment” of the base movement, but also the fact that you can see the large balance wheel oscillating all the time on the front of the watch. I like how Thomas Ninchritz used a type of circular strip polish on the mainplate of the movement, as well as the overall decoration. There is also some hand engraving on the balance wheel cock, and a swan neck fine adjustment. Thomas Ninchritz isn’t the only one to use this higher-end 6498 movement, but I tend to see them mostly in German watches (which includes Thomas Ninchritz). 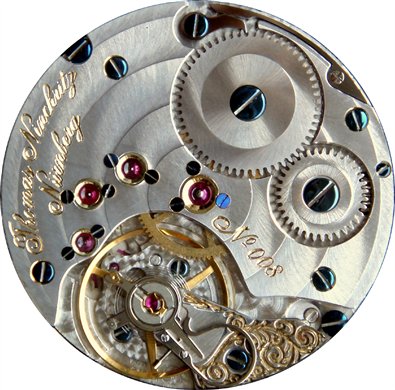 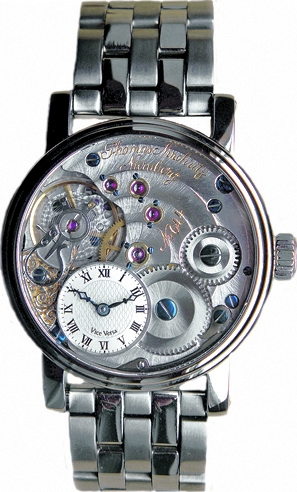 The watch case it 42mm wide and available in a few versions. All gold, steel, or gold mixed with steel. This also applied to the watch dial itself which is available in a few styles. While small, it is still able to be read. A good time to wear a watch like this is when you are in the company of fellow watch nerds. I think the lay person would appreciate the looks of it, but the watch isn’t practical enough to be worn on a daily basis in my opinion. There are lots of people out there who have a serious fondness for the look of decorated mechanical movements, and for them a watch like this Vice Versa is appealing, but it is still more an interesting collector’s item rather than something that should be part of a small collection for people who want only a few good all-around timepieces. Price is between 4,400 – 10,500 euros. See a Thomas Ninchritz Vice Versa watch available on James List here.