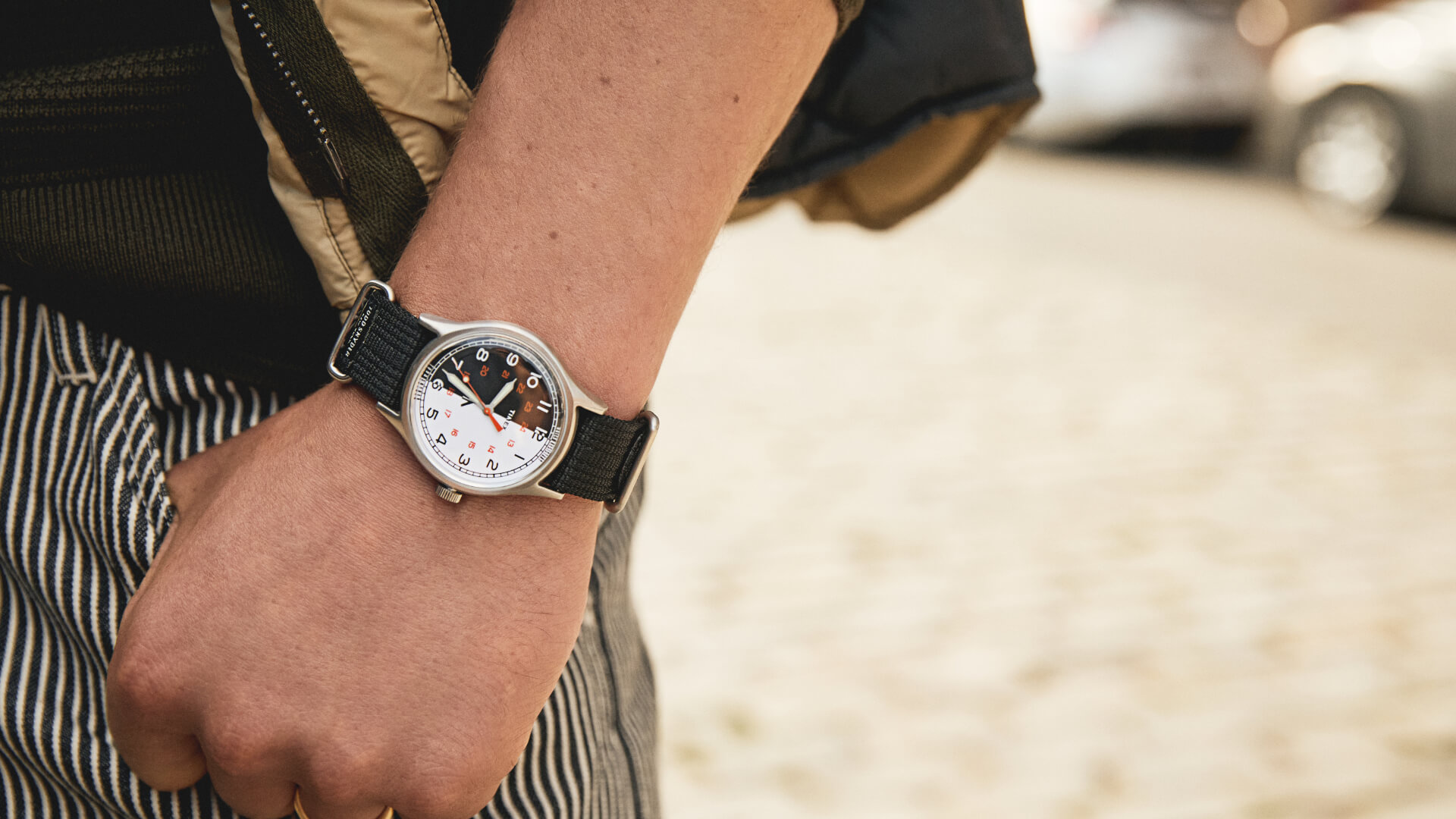 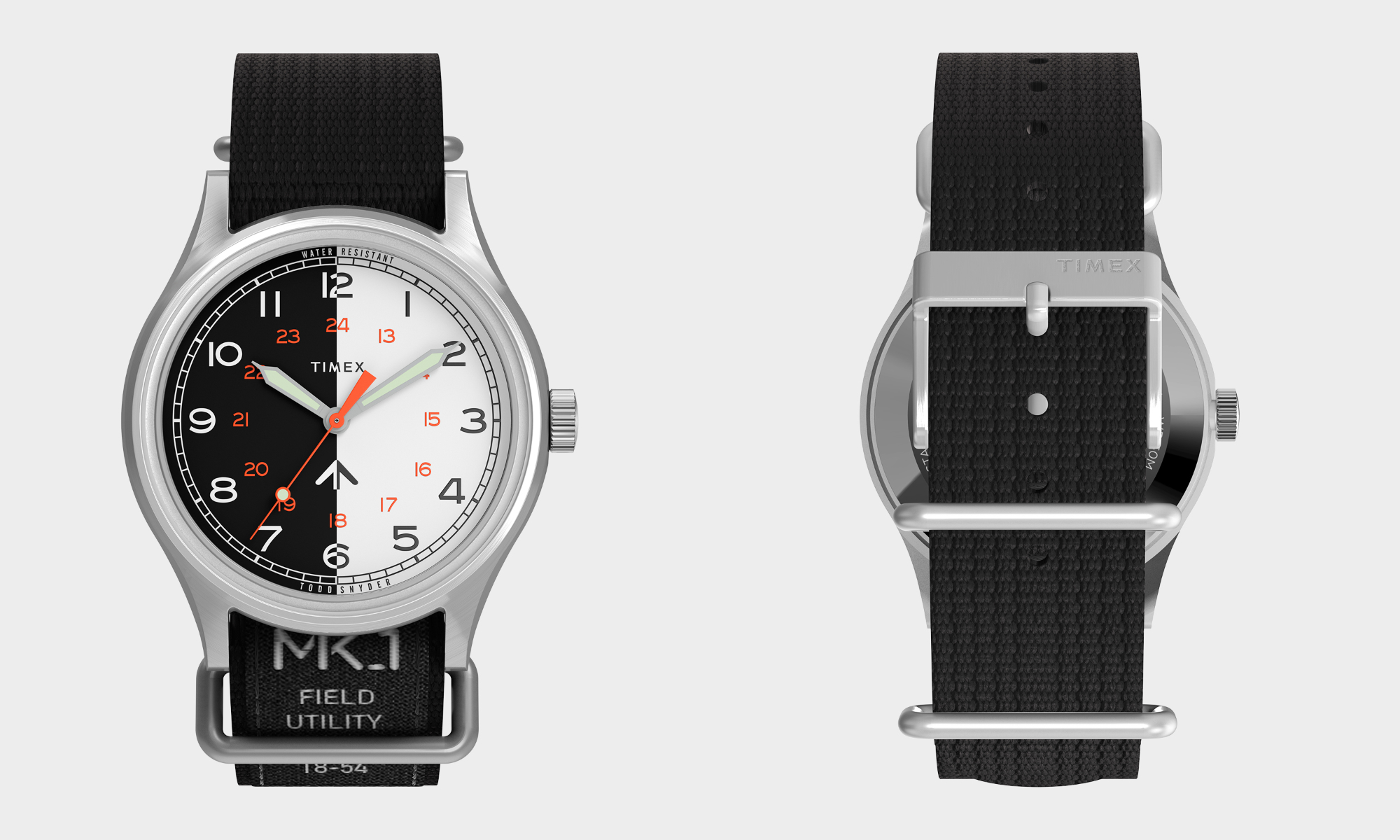 Unless you’ve been under a horological rock, you know that Timex and Todd Snyder have been collaborating for years. The collaborations are always inspired by vintage designs, often by military watches. And they’re universally popular, whether it’s for their undeniably good looks or their quirk, the proposition of two American brands producing affordable watches doesn’t seem to tire. So you won’t be surprised to hear that they’re at it again, this time with a watch that may split the watch community: the Timex X Todd Snyder MK-1 “Black + White”. Now, this isn’t the first watch with a black and white dial. I’m reminded of several vintage Rados as well as more recent offerings from both Zenith and Chanel. While Rado did the same split down the middle, Zenith favored a diagonal split for its Lupin the Third Chronomaster and Chanel went straight bonkers with a two-tone ceramic case, dial, and bezel. Well, Timex and Todd Snyder aren’t rehashing an old design, but they also aren’t breaking any molds. 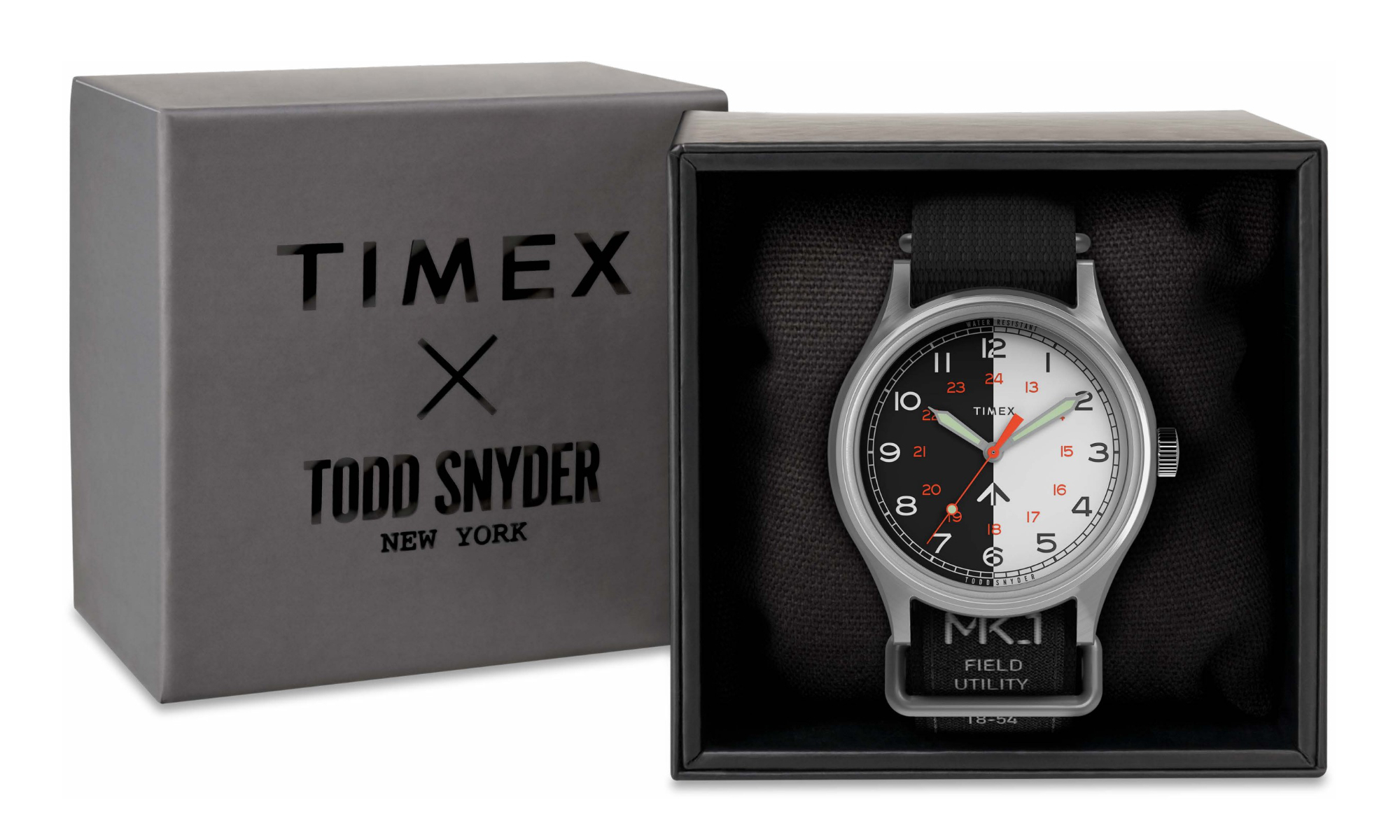 To hear Timex and Todd Snyder tell it, the idea for the MK-1 Black + White was to blend the black dials of historic military watches—watches inextricably linked to war—and the white dials that dominated (and continue to dominate) more formal dress watches—watches worn far away from the frontlines where peace prevails. In splitting the dial, the watch contrasts war and peace, black and white—it also makes for a cool design, especially with the pops of red on the 24-hour track and the lollipop seconds hand and the way the colors are inverted for the dial markings along the midline. The sword hands feature a coating of lume, and rest assured that the dial features an Indiglo backlight activated by the crown. Check out the broad arrow at 6 o’clock though. Yes, it’s a classic element found on historic military watches, but it’s a classic British element. The broad arrow was made famous on watches by the “Dirty Dozen” military watches of World War II, commissioned by the British Ministry of Defense. The inclusion of the broad arrow let you know that the watch was commissioned by and property of Her Majesty’s Government. Included here, on a watch from two very American brands, it feels out of place. 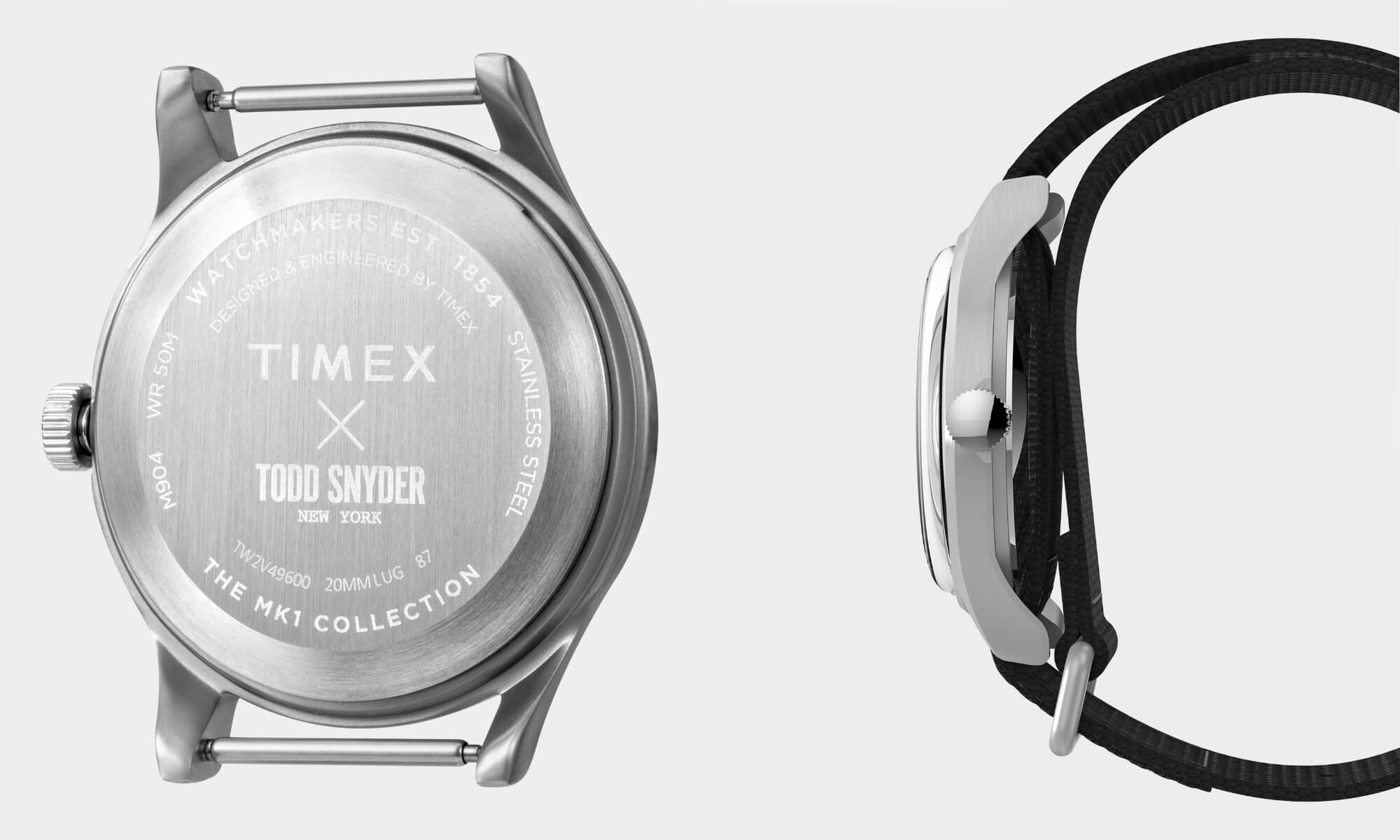 The case is kept simple, which allows the dial to do all the talking. The 40mm case has 20mm lugs and a modest water resistance of 50m. The pull-out crown It features a domed acrylic crystal and is secured to a black NATO strap with MK-1 markings, which reinforces the military field design. Design-wise, this steel case will be very familiar to anyone who’s bought a Timex recently, as its silhouette features across the brand’s collections. It’s defined by a rounded bezel and narrow lugs with a profile that expands as they reach their termina. The snap-on caseback features branding and some obligatory specifications. The movement, as you may expect, is a generic quartz movement, about which no details are provided. 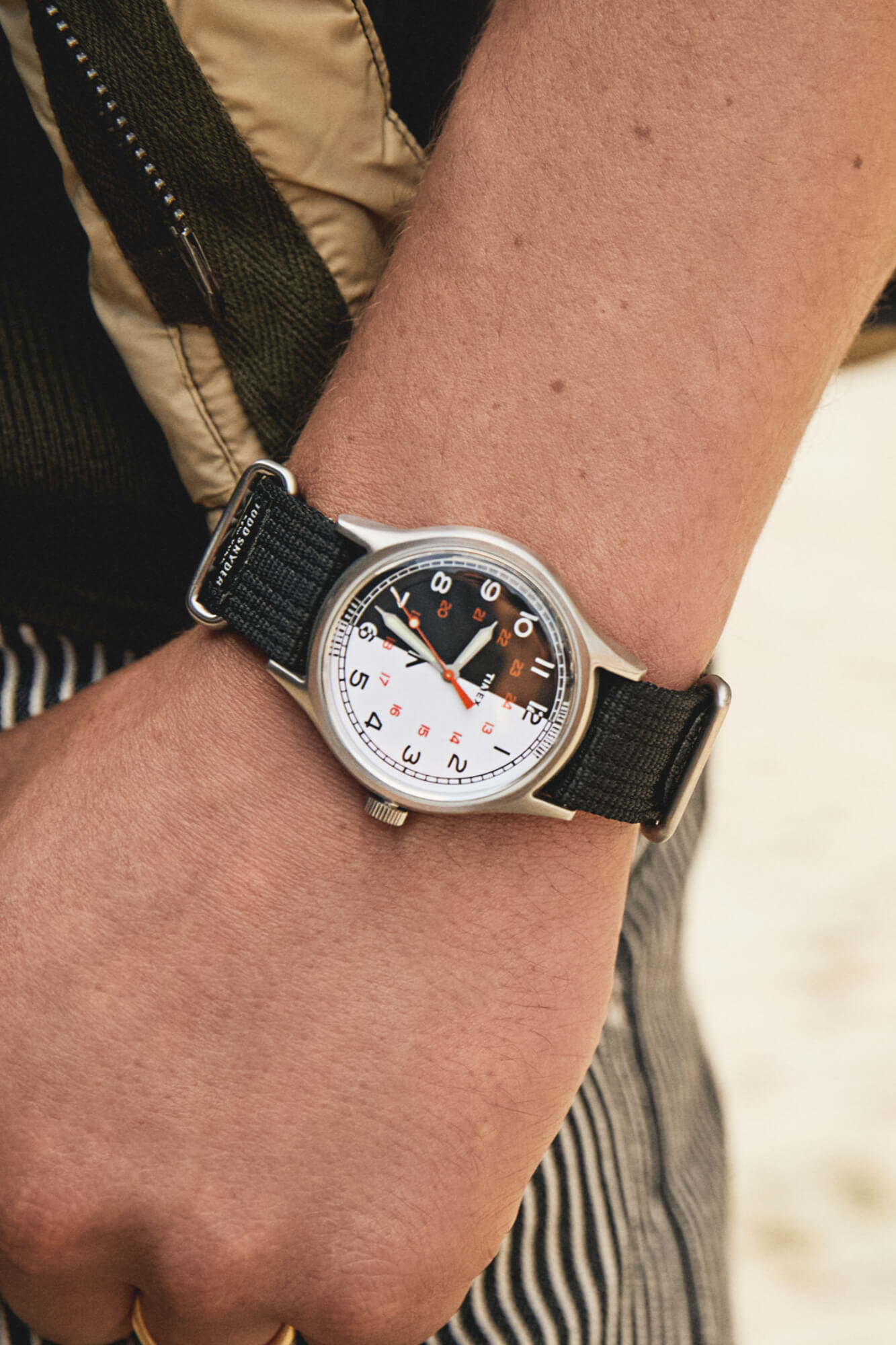 I’m always suspicious when quirky watch designs have meaning ascribed to them. I’d be much more inclined to believe that someone in the design department thought up a black and white dial, then created an inspirational story after the fact. But that’s the cynic in me. The bold black and white contrast infuses the practicality of a traditional field watch dial with a bit of whimsy, delivering a watch that is good, cheap fun. The Timex X Todd Snyder MK-1 “Black + White” is priced at $138. For more information, please visit the Todd Snyder website.