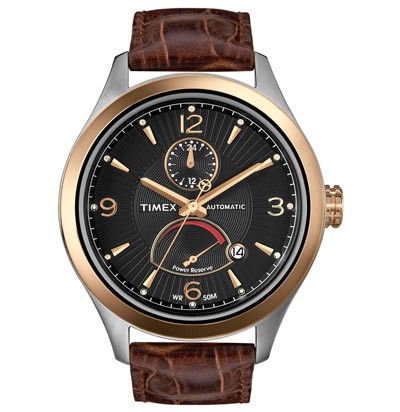 This is new to me, and I am not sure if you can get these in the US (but similar Timex watches in the US are available). These are Timex T-Series automatic mechanical watches. Pretty decent looking  mechanical watches from the brand known for quartz, quartz, and more quartz. Movements are 22 jewel automatics with a power reserve indicator and 24 hour hand. There is of course the time and the date. I believe the movements are Timex exclusives and have a 36 hour power reserve. The watches are in steel with sunburst decorated dials – in a few colors in addition to the black (such as white and blue dial colors). Along with the metal bracelet, there is a crocodile patterned black or brown leather strap. 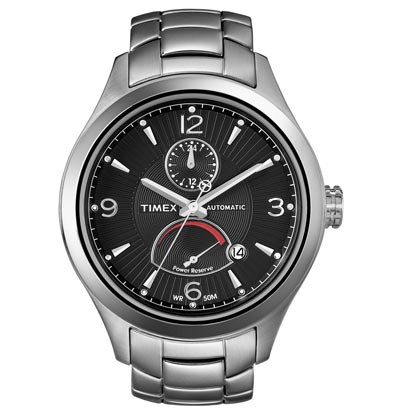 The T-Series Automatic watches take the legibility and practicality that Timex is known for, and gives it a bit of a higher-end push. Style is contained in the functional, no nonsense exterior. While very characteristically Timex, they are rarities compared with what you see mostly in the US. Apparently the original T-Series watches were released in 2007, and these are the follow up watches. I think they are mostly for Europe though.

Look closely at the counterweight on the seconds hand, and you’ll see the little “T” in the circle which is a Timex logo. Nice little touch. The watches are also water resistant to 50 meters. I sort of like the watches in a nostalgic way. I’ve been rather hostile to many Timex watches. Admittedly, many of them are quite ugly. But when I see a watch like this, it makes me want to rethink the brand. Prices aren’t too bad. 199-219 euros. Though I have versions of Timex automatic watches with same movement in them for under $100 here in the US.