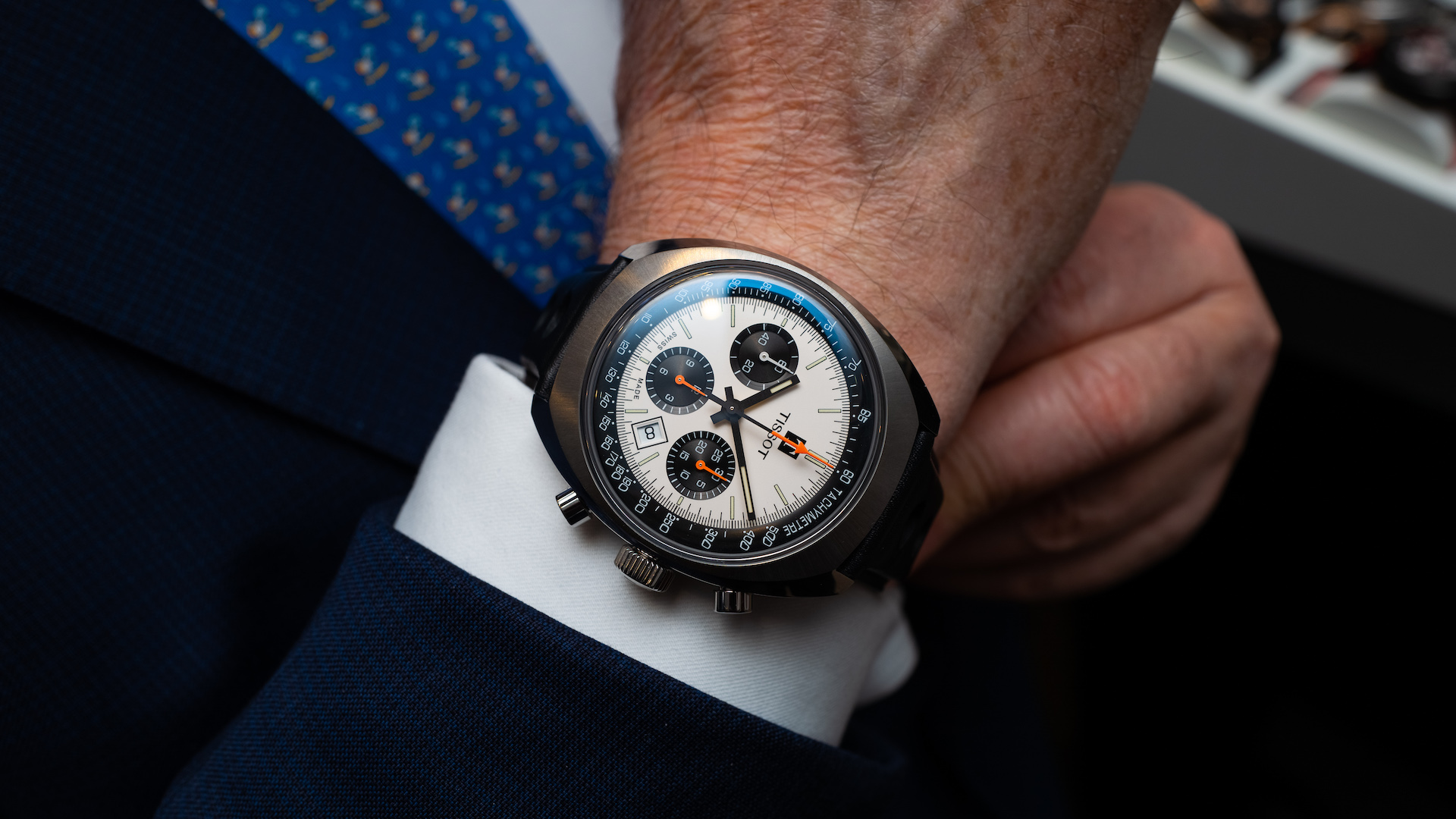 The new Tissot Heritage 1973 Chronograph (modeled in the above photo by Tissot President François Thiébaud) is a throwback to the 1970s and Formula 1 racing, all in a tonneau case and with a design that actually might improve upon the vintage model it’s inspired by. The old Tissot Navigator had two sub-dials at 6 and 9 o’clock, whereas this new Heritage 1973 goes with the more traditional layout of sub-dials at 3, 6, and 9 o’clock with a date window between 4 and 5 o’clock.

A more premium offering than many of the products in the current Tissot line, the Heritage 1973 is powered by the automatic ETA 7753 chronograph, which has been embellished by a branded rotor weight. The result is a sporty, credible racing timer with a pleasing vintage style that has been released to celebrate the partnership between Tissot and the Kessels racing team. 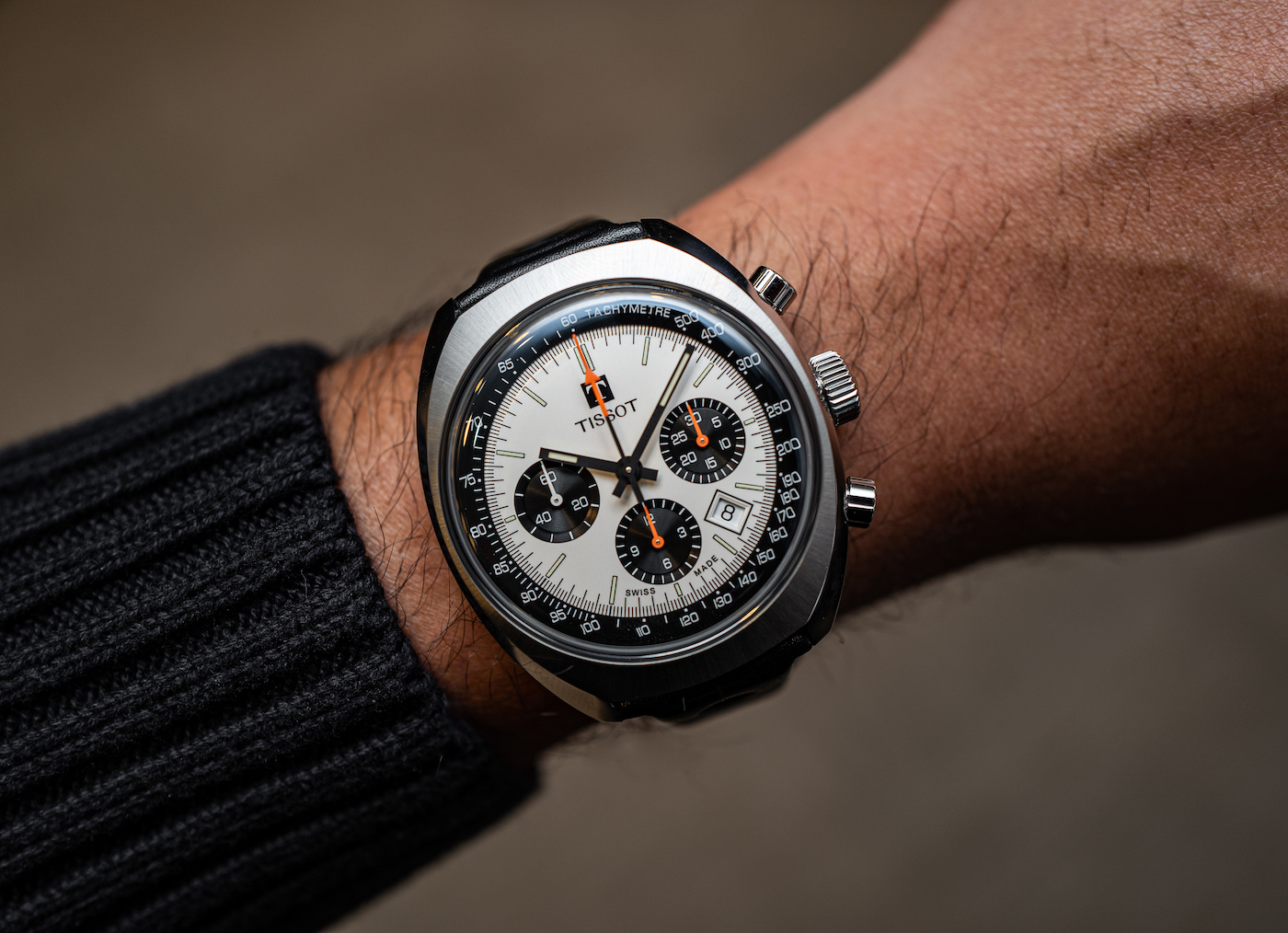 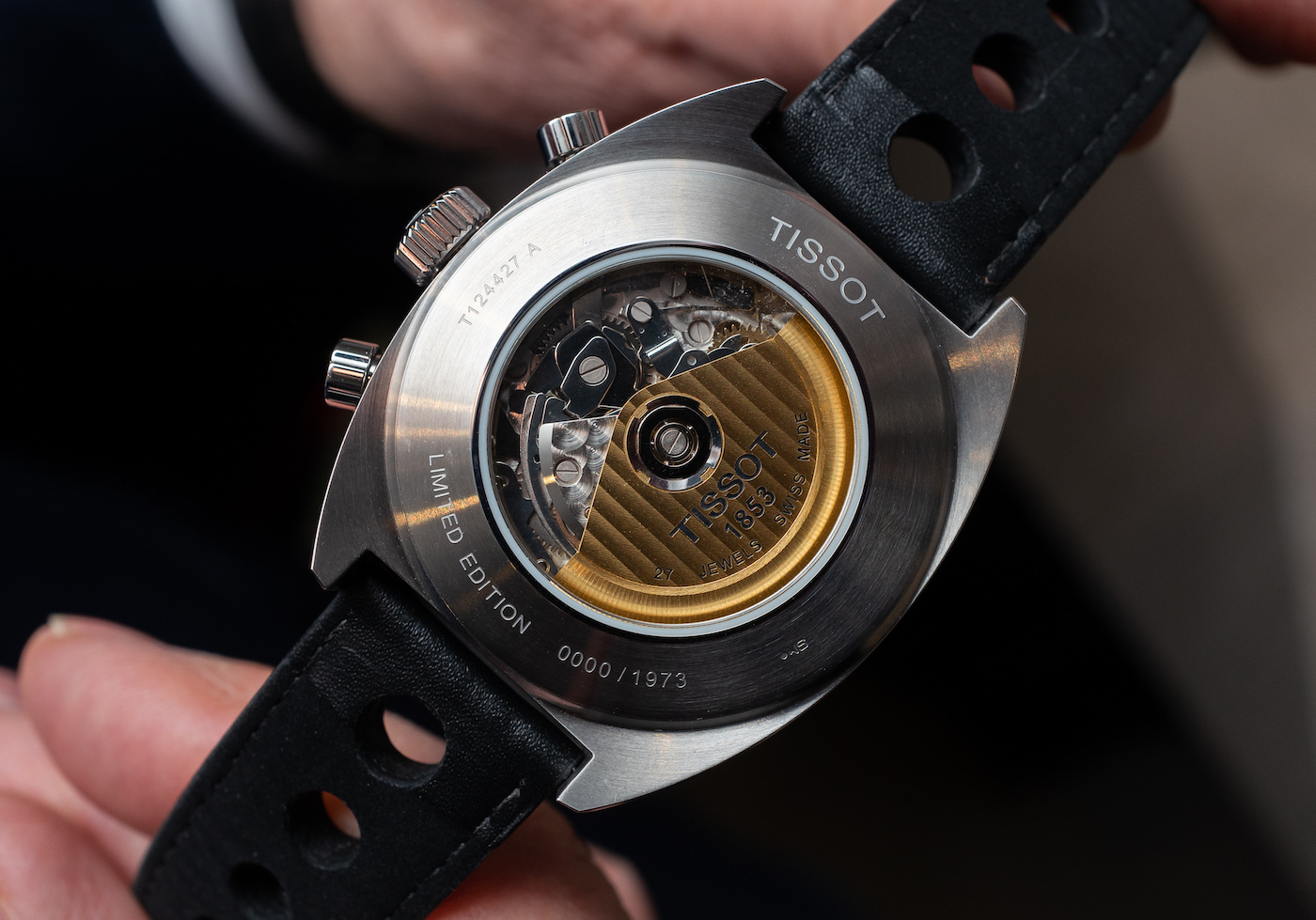 The monobloc stainless steel case is decorated with contrasting finishes. The upper portion of the case is radially brushed, while generously sized bevels are highly polished, creating a sharp distinction between the main body of the case and the short lugs that carry a “racing” strap in black calf leather. As 43mm-wide and 14.8mm-tall, this chronograph is relatively petite for a watch powered by a movement in the 7750 family (due to the thickness of the movement, getting a watch under 14mm is, although possible, quite a manufacturing challenge if robustness is to be maintained). The classic styling recalls the recently released Zenith El Primero A384, which also harvested the back catalog effectively, putting to market a timeless racing watch that has been treated to the benefits of modern manufacturing. 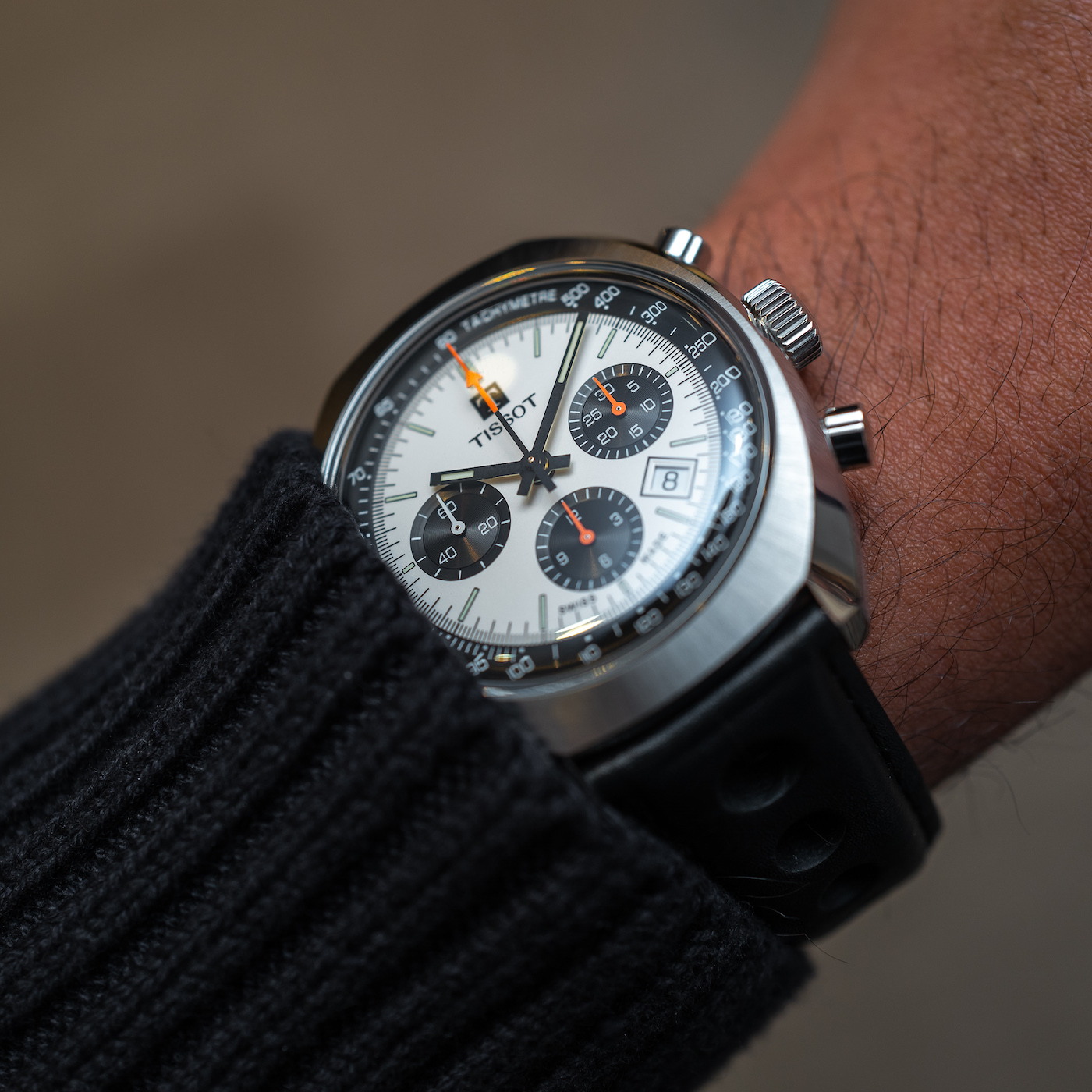 The inspiration for the Tissot Heritage 1973 came from the Tissot Navigator, which was integral to many of Tissot’s early motor racing partnerships. This long association stretches back to 1973 when Tissot forged a partnership with Alpine and went on to dominate the rally circuit. Following that success, the brand teamed up with Porsche for the Le Mans 24 hour Gran Turismo race. Later still, Tissot went on to sponsor an F1 car. And thanks to this association with Formula 1, Tissot forged a particularly close bond with Loris Kessel, who competed in Formula 1 in 1976 under the Tissot banner. It is this relationship that has given rise to the current collaboration and the subsequent release of this watch. 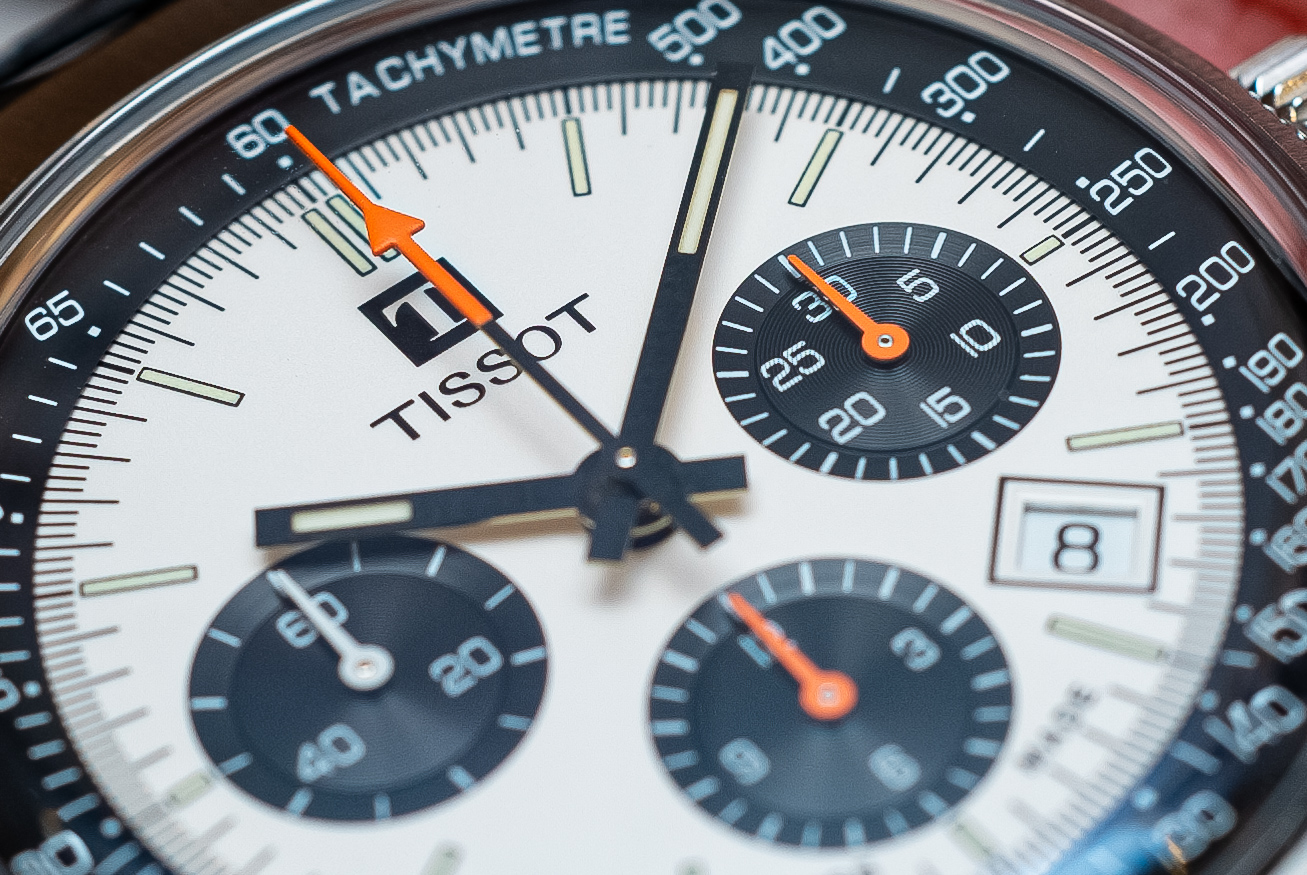 The panda dial has a slightly off-white base and three black sub-dials. The going seconds hand is shown at 9 o’clock, while the sub-dials at 3 and 6 o’clock show the chronograph minutes (30) and hours (12) respectively. Around the outside of the dial, a tachymeter scale for measuring speed over a known distance is printed. A legible date window between 4 and 5 o’clock does not overly clutter the dial, and the blockish, retro logo beneath the 12 o’clock marker is a stylistically congruous choice. 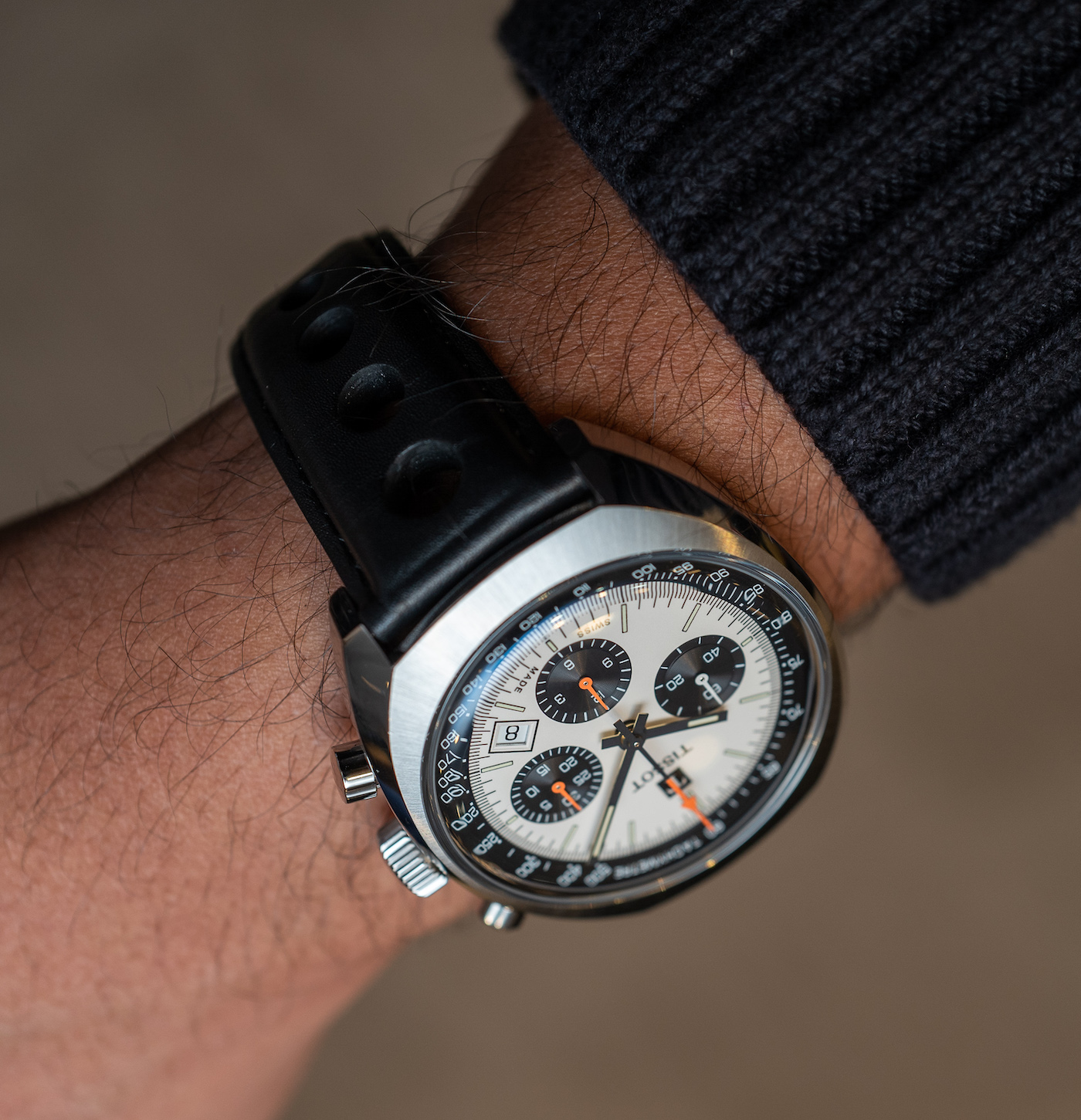 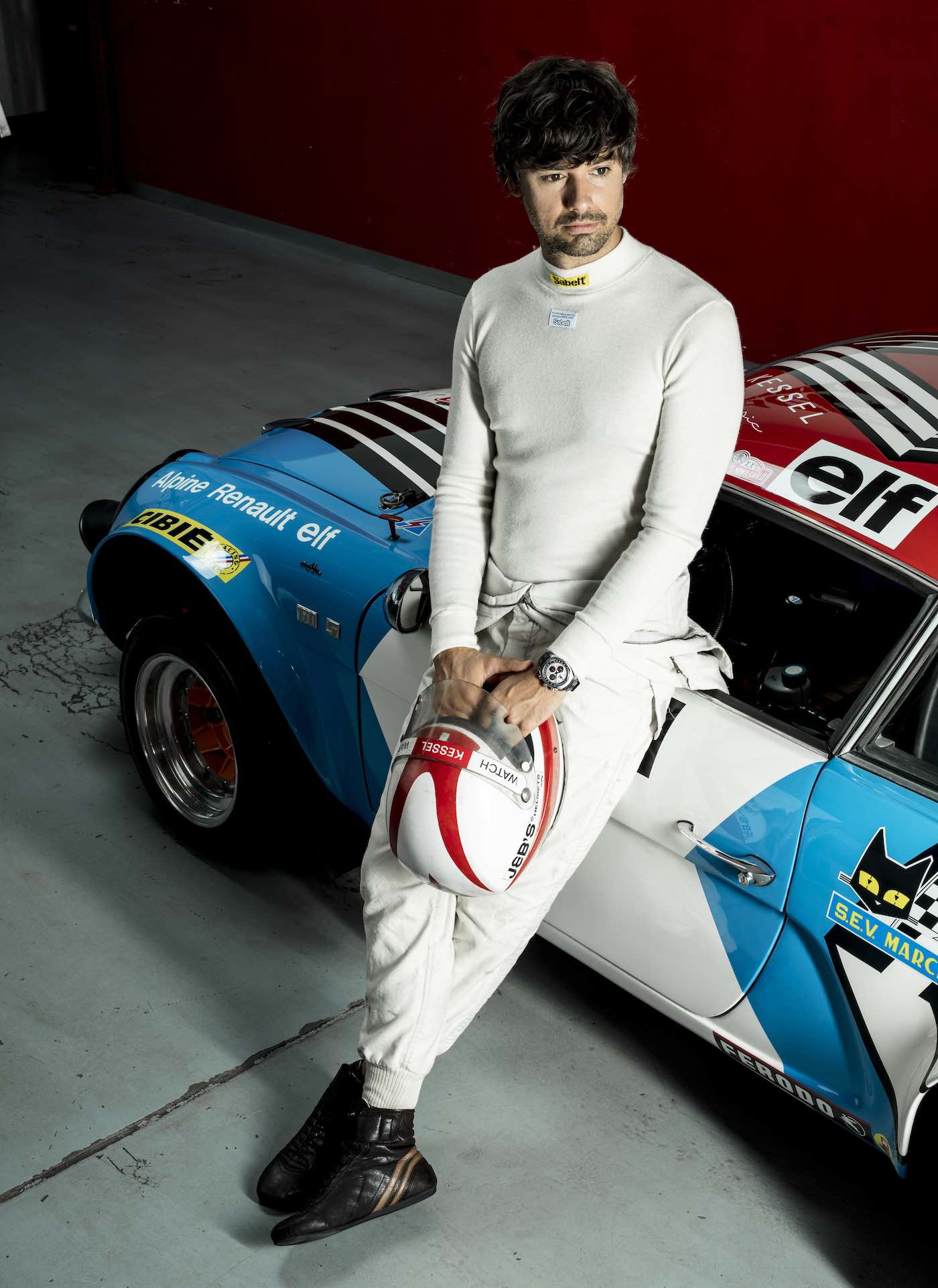 The use of a somewhat dull orange as an accent color was perhaps motivated by the styles of the era from which this watch takes its inspiration. Although I would have enjoyed a more vibrant orange (or even bright red), it is another easily justifiable decision in the design of what is a thoroughly wearable, versatile sport watch. 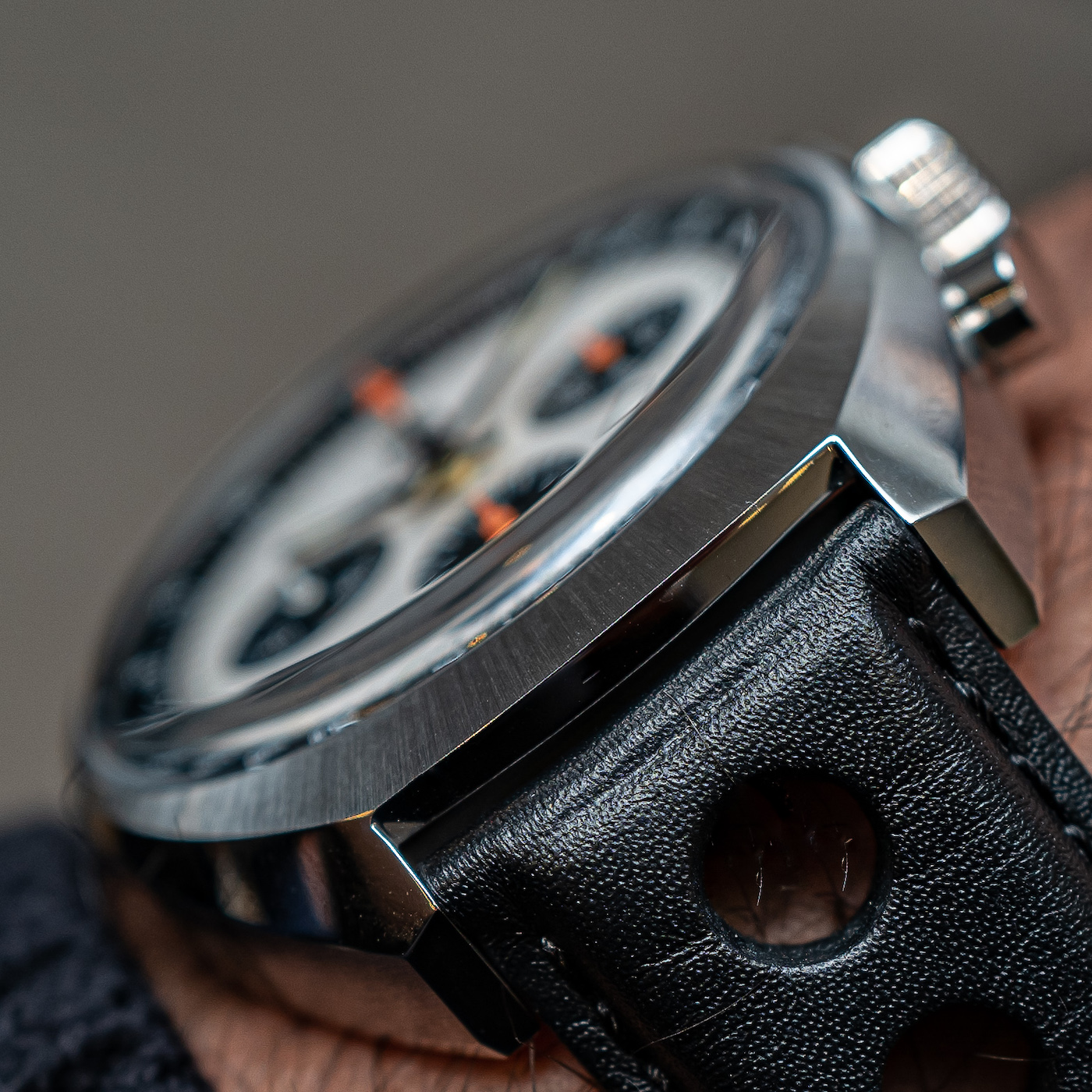 The watch manages to stand out in the very crowded field of vintage-style chronographs, and with a price of $2,100 (limited to 1,973 pieces), it’s a tempting value proposition. The market for retro-style sport watches is crowded but  can get on the pricier side. This is true when compared to several “heritage” models from TAG Heuer (Monza, Monaco, Heuer 02) all of which are in the mid-$5,000 range. But even looking at the Baume & Mercier Clifton Club chronographs (starting at $3,900) or the Oris Chronoris Limited Edition Chronographs at $3,550, it’s tough to find a value as good as this Tissot Heritage 1973. In fact, a Swatch Group sibling’s offering, the Hamilton Intra-Matic Chronograph might be the best comparison point at $2,100. 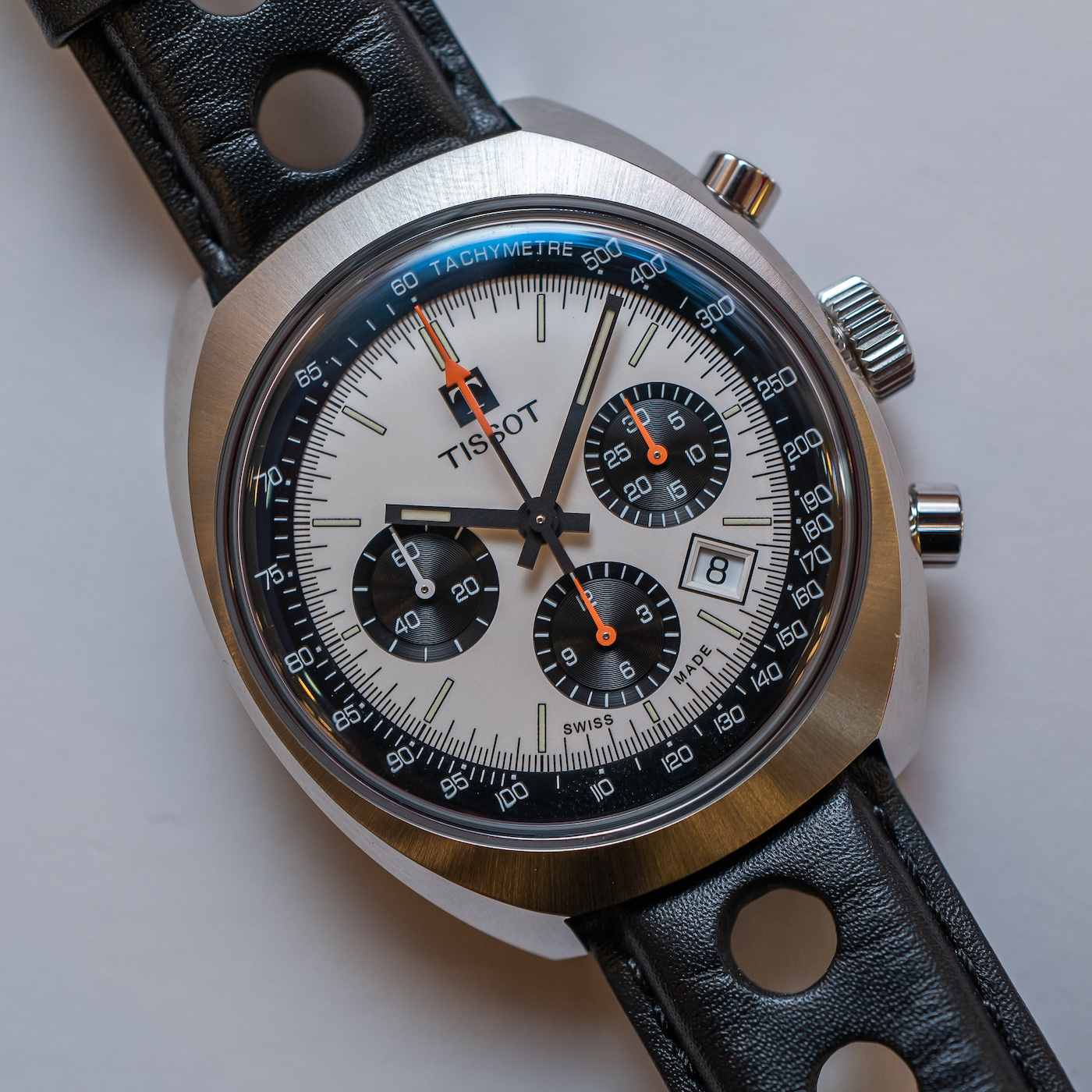 With a retail price of $2,100, this is not the cheapest Tissot racing chronograph one can buy, but it has the brand power and a solid movement selection to back up the price. It is also a timely release, capitalizing on the current rash of throwback chronographs hitting the market. As is often the case with Swatch Group brands, thanks to the huge volume of their production, what you’re getting is a high-quality watch at a reasonable price. While this watch may not attract attention from across a crowded room (and I reckon that’s not the buyer Tissot is going for here, anyway), it certainly has the kind of style you would want for this kind of investment and stands up well under scrutiny. The Tissot Heritage 1973 watch is limited to just 1,973 pieces and is available now.