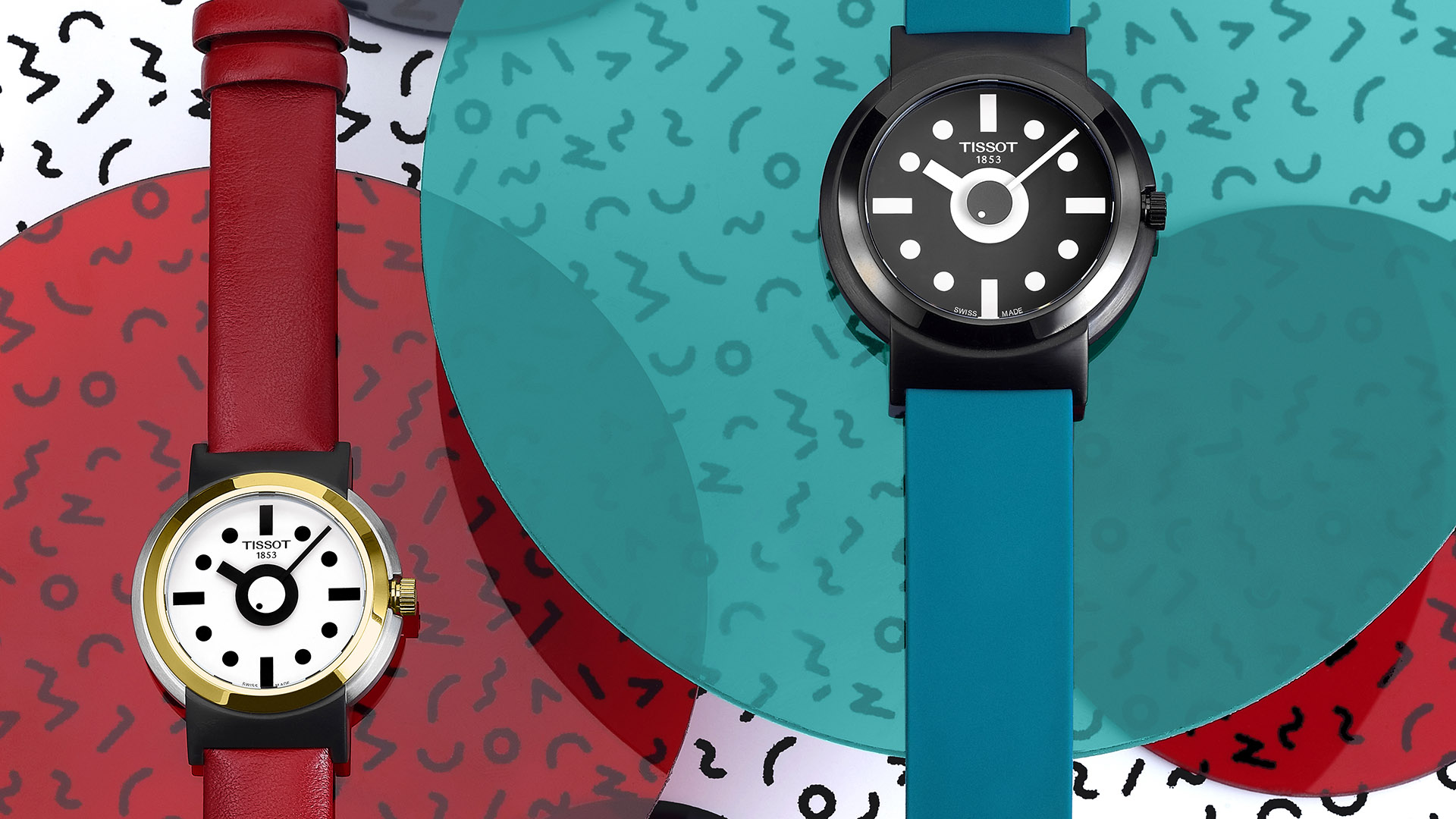 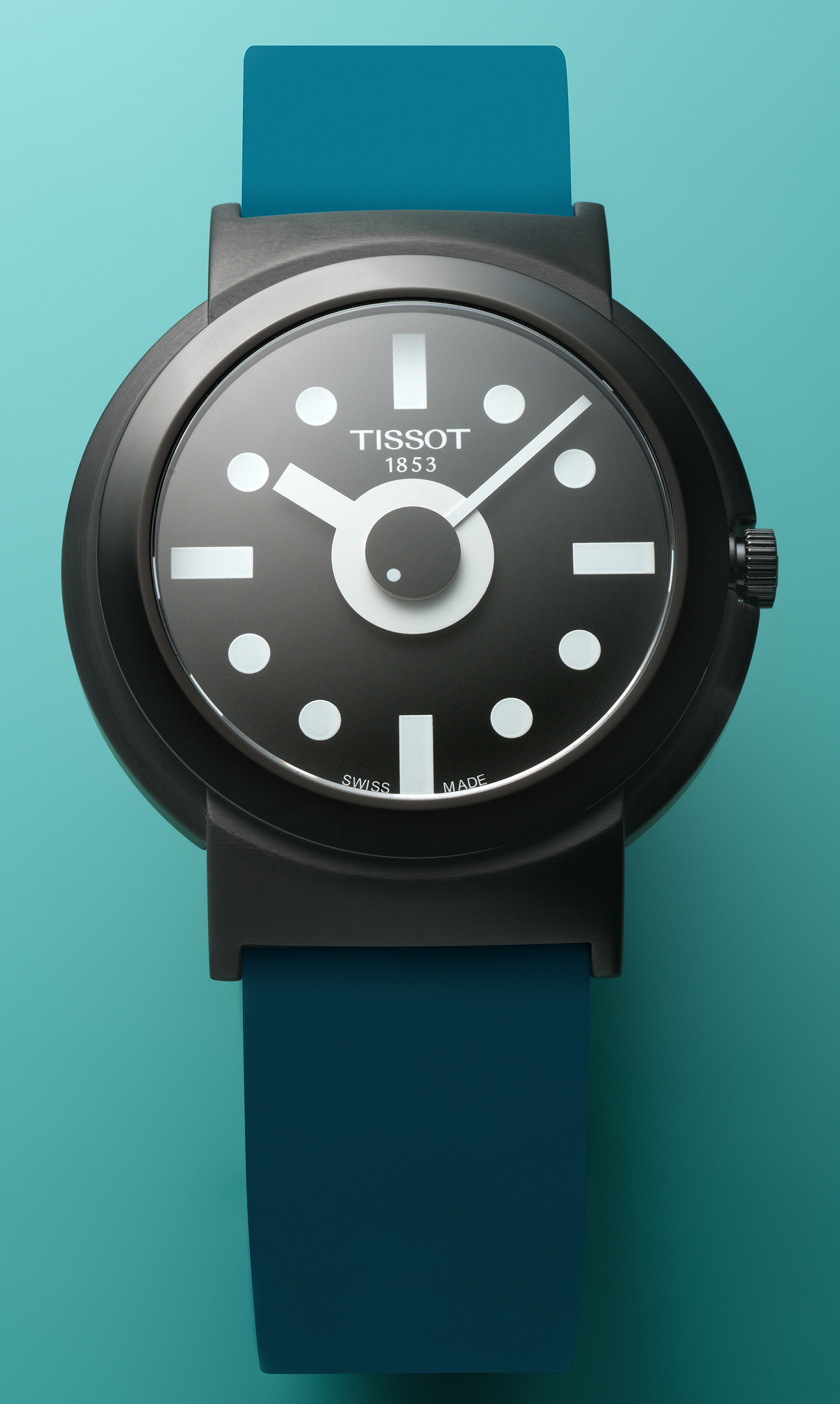 For 2021, Swiss Tissot is re-releasing an interesting neo-Bauhaus watch it originally debuted in the late 1980s as conceived by the creator of one of the most interesting design schools of modern times: Ettore Sottsass. Today’s Tissot Heritage Memphis watches will be produced as limited edition models for both men (41mm-wide case) and women (34mm-wide case), faithfully recreating a still very interesting design while also smartly positioning the product at an affordable price point, making it appealing to a larger spectrum of collectors.

The Tissot Memphis collection was designed for Tissot by Milan-based design collective known as the Memphis Group. This was a group of industrial and artistic designs assembled and led by the Italian designer Ettore Sottsass, and it lasted from 1980-1987. The Tissot Memphis was personally designed by Ettore Sottsass himself and came out in 1988. More on the Memphis Group below — but first the watch.

In a vacuum, the Tissot Heritage Memphis has peculiar curb appeal. It has what some designers call a “brutalist” approach, but in the context of other Memphis Milano (another name for the group) designs, the Memphis watch was pretty conservative (especially in colors). The watch is born of the “pong” era when early computer design had firmly made its way into the pop culture zeitgeist. The watch is a very viable member of the larger Memphis Group aesthetic and, as a timepiece, it does the job of being legible quite well. One of my favorite features is the disc in the center of the dial that replaces the traditional seconds hand. It has a small dot on it that represents the current seconds indicator, and it revolves around the dial like a watchful eye. 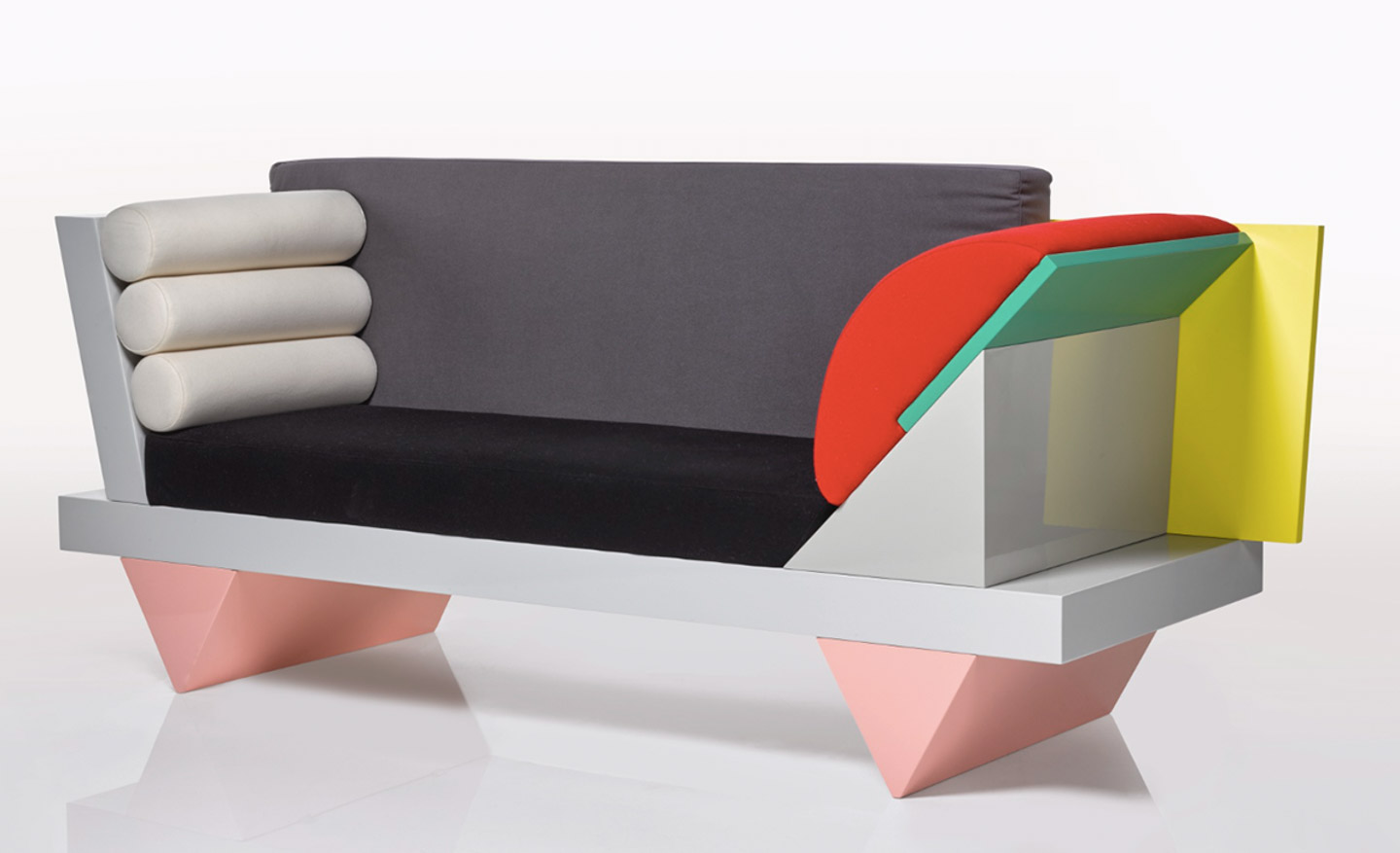 Mr. Sottsass understood watch design enough to know that the hour and minute hand needed to be appreciably different in order to maximize legibility. The case is perhaps the most dated part of the watch, but it still looks interesting and fits in well with the types of “shape stacking” you see in Memphis Group items. I also believe that the Tissot Memphis watch was not only the very first wristwatch design to come from the Memphis Group, but that is also only one of two designed by Ettore. What was the other? A funny story, actually. 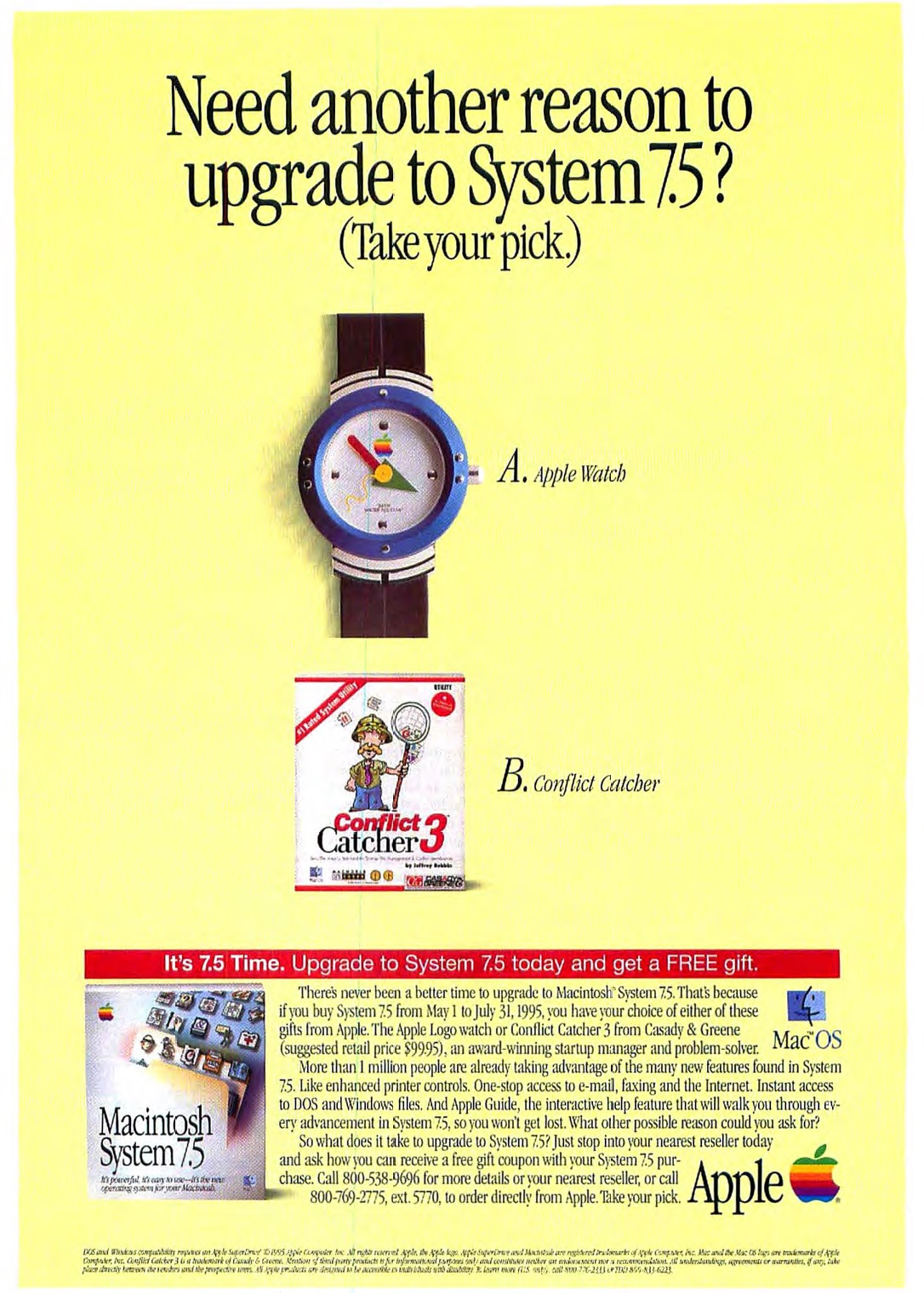 In 1995, an advertisement in Macworld magazine prompted Apple Macintosh users to purchase the latest version of the Macintosh operating system. Buyers who upgraded prior to July 31, 1995, could choose one of two optional free gifts. Either a full copy of Conflict Catcher 3 (a then-popular system utility that looked for software-error causing program conflicts — a $99.95 value) — or the Apple Watch. Yes, the Apple Watch was originally an Italian-designed fashion timepiece commissioned by [presumably] Apple from Ettore Sotsass. The designer was well-known among graphic designers, animators, and user interface designers (many of whom would have used Apple products). You can read more about the 1995 Apple Watch here, and now, in watch nerd circles, you can quiz people by asking them, “What do Apple and Tissot have in common?” The answer, of course, is that they both hired Ettore Sottsass to make some obscure and interesting watches. You can also see that the Tissot Memphis watch had some design cues (namely in the case) that made their way into the 1995 Apple Watch. 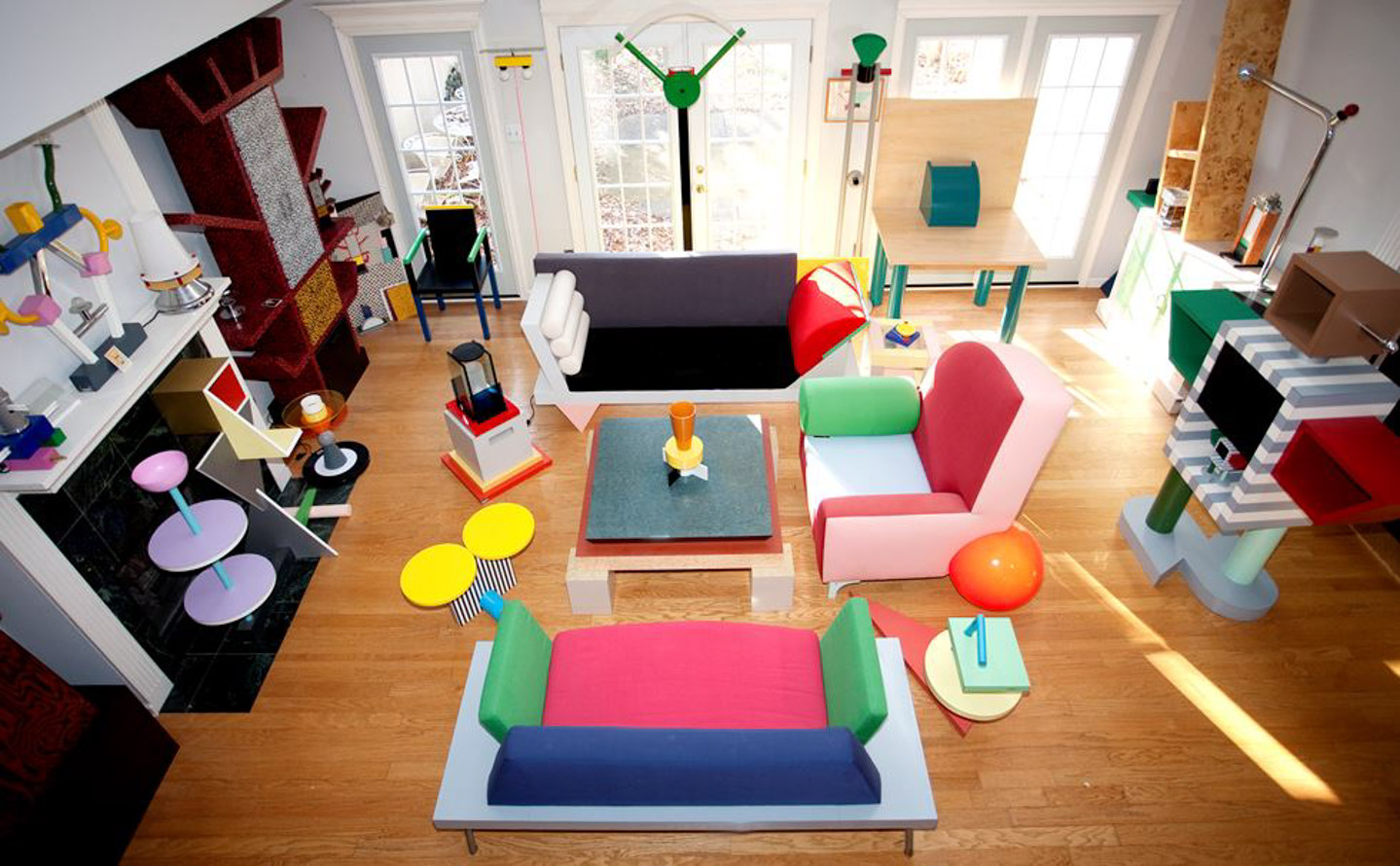 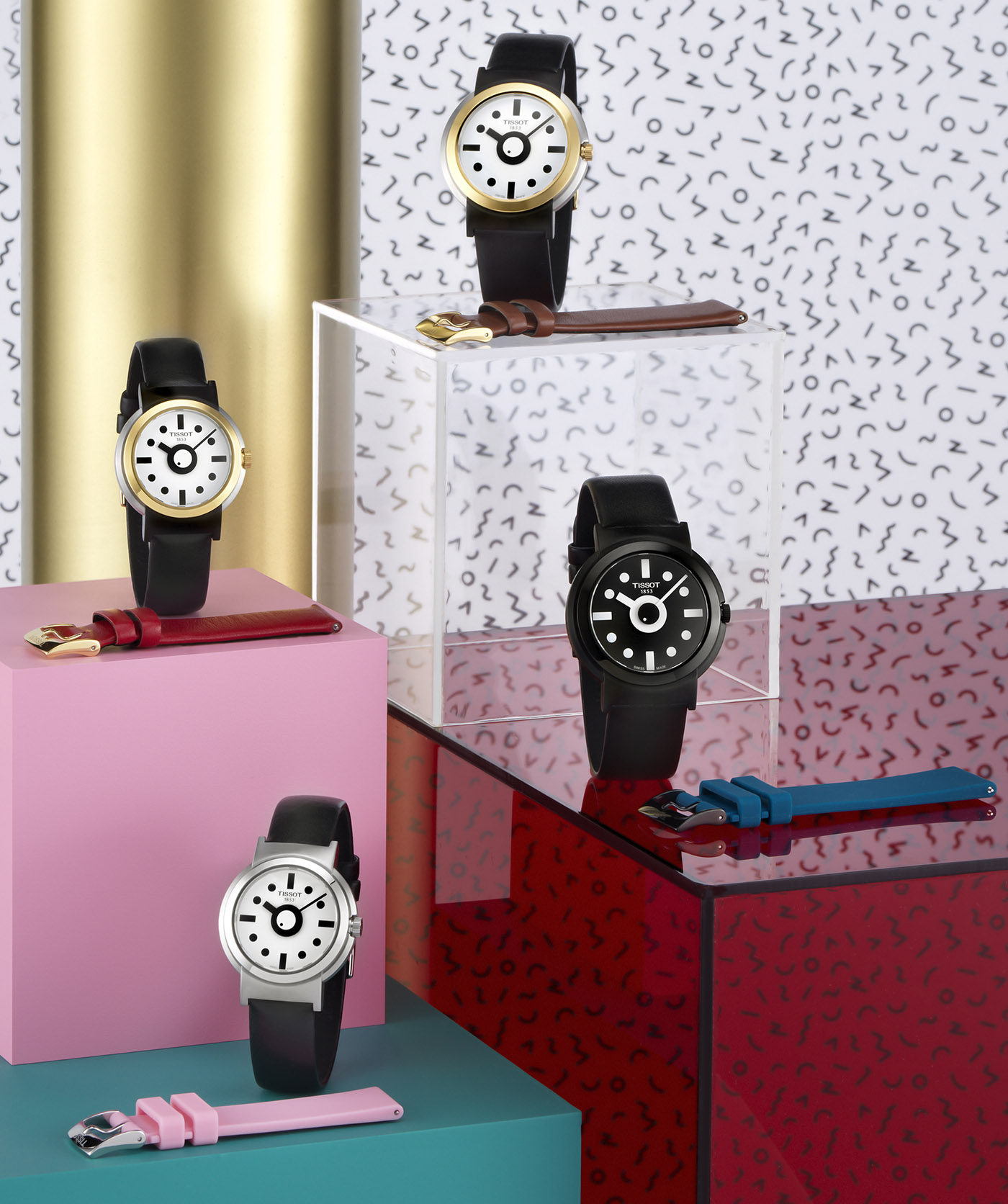 Memphis Group’s design themes made their way into everything from children’s Saturday morning cartoons to Hollywood movies. The products themselves were an interesting combination of friendly colors, geometric shapes, and the wonder of playing with construction blocks. It was like Bauhaus for the anti-depressant generation that needed just that much more visual kick to get them excited. People have always had a very mixed relationship with Memphis Group furniture and interior design because it can be visually incredible but also awkwardly inhuman, at the same time. Much of the emotional trick of Memphis Group items was, more or less, “Can you believe it is still a (insert name of typical household item or appliance here), but look like this?!”

Funny enough, the Memphis name comes not from the ancient city in Egypt or in Tennessee, but rather from a song. Legend has it that Ettore and friends were listening to Bob Dylan while thinking of a name, and the song “Stuck Inside of Mobile with the Memphis Blues Again” was playing. 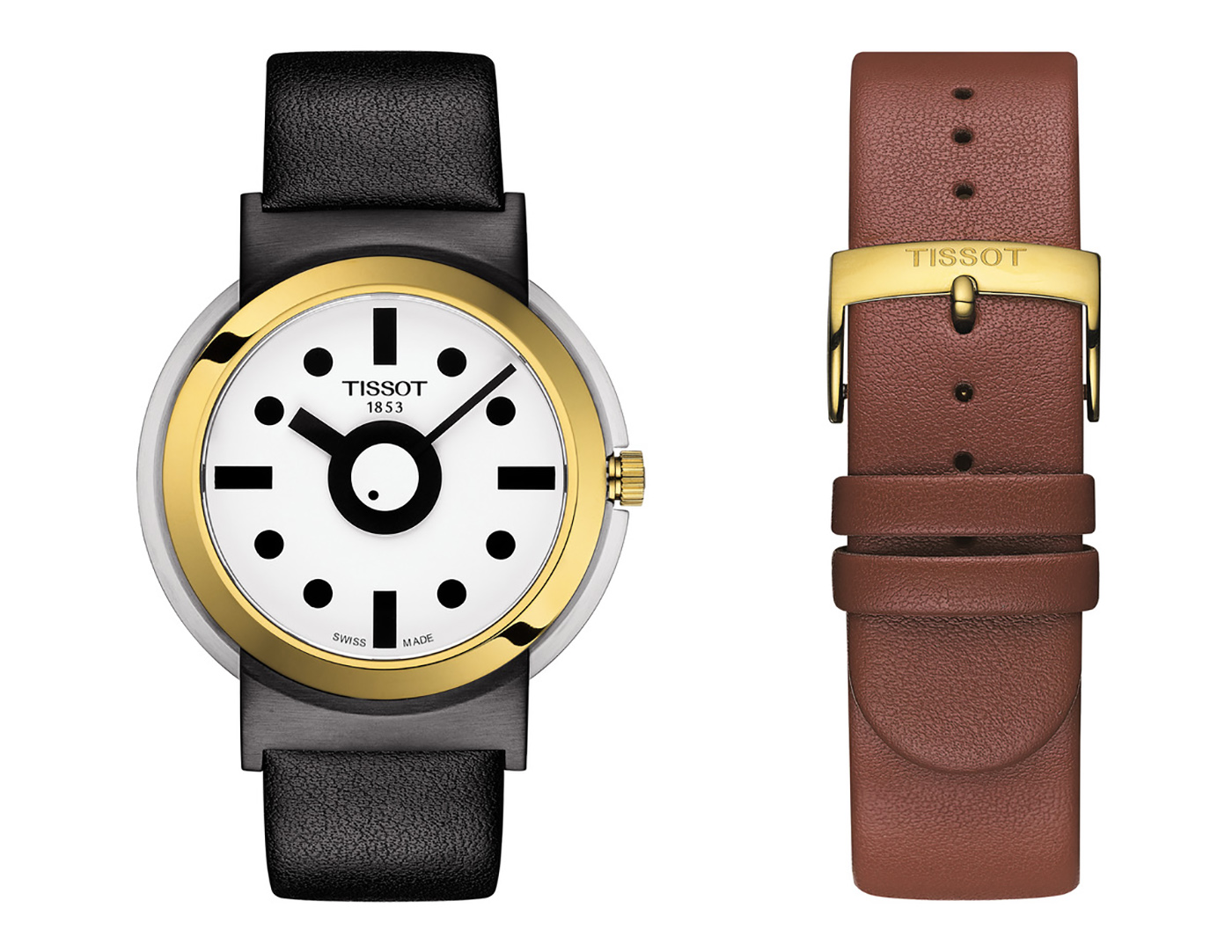 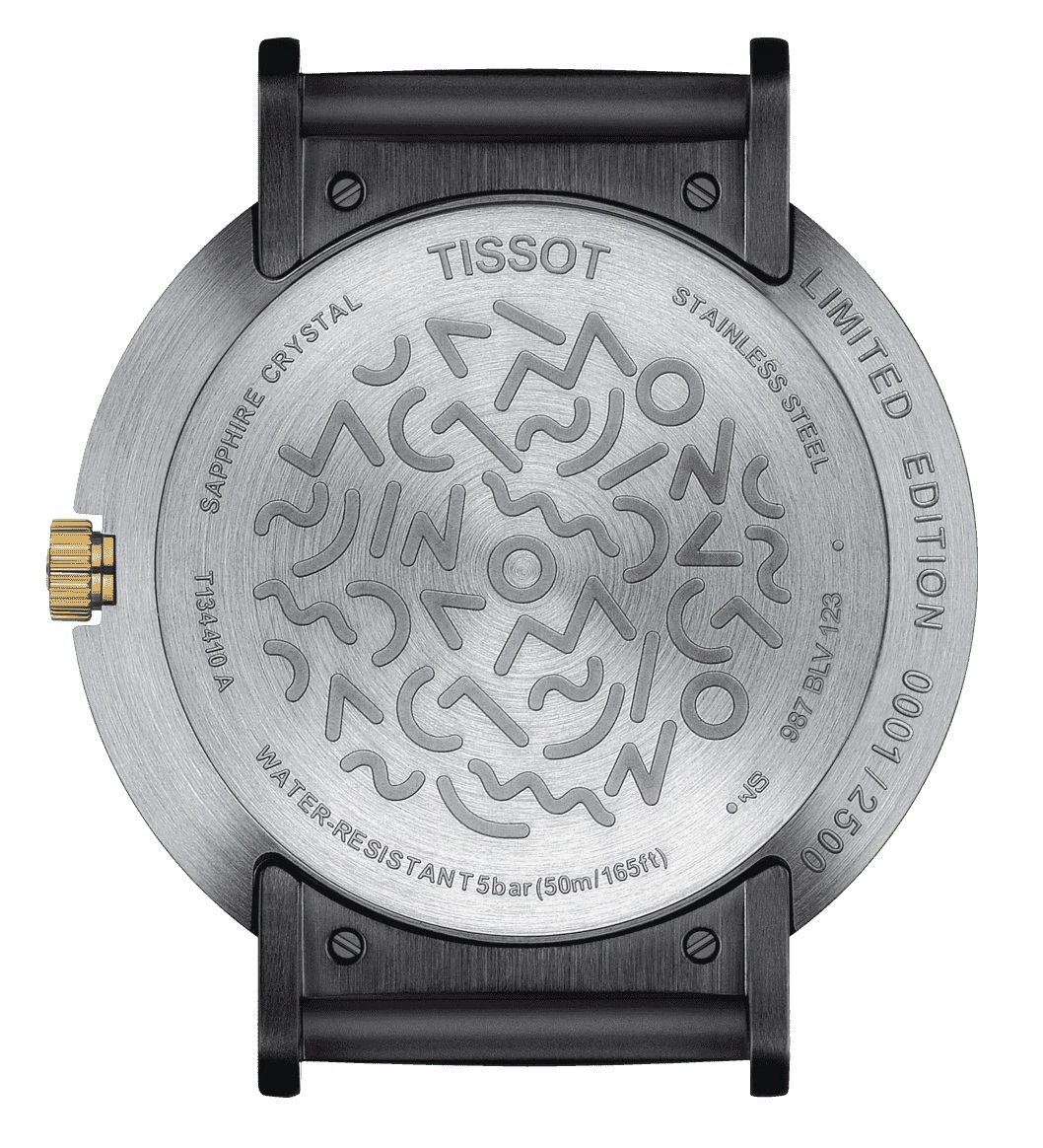 My positive emotions toward Memphis Group style probably comes from the fact that I grew up with entertainment properties like PeeWee’s Playhouse and many early 1990s Nickelodeon cartoons that included the aesthetic in their art directions. I always found the style to be friendly and playful, as well as deeply satirical about the modern human condition. Today, we find elements of Memphis Group design having come back in a rather huge way in the form of urban street fashion — mostly in the blocky lines and use of similar color palettes. The clothing is really just inspired by early 1990s fashion, which is, of course, heavily Memphis Milano-inspired to begin with.

Returning to the 2021 Tissot Heritage Memphis watches — the cases are in steel — with sections in PVD-coated gold and black (reference T134.410.27.011.00) or all-black tone (reference T134.410.37.051.00). The cases are water-resistant to 50 meters with a sapphire crystal, and they contain Swiss ETA PreciDrive quartz movements. The Heritage Memphis watches will come in two sizes (as mentioned above) with the 34mm-wide size for women, and a larger 41mm-wide size for me. For me, the winner model is the 41mm wide men’s Heritage Memphis in the all-black-colored case with the white dial (which is in contrast to the original Memphis watch that had the white dial with black hands and indicators. 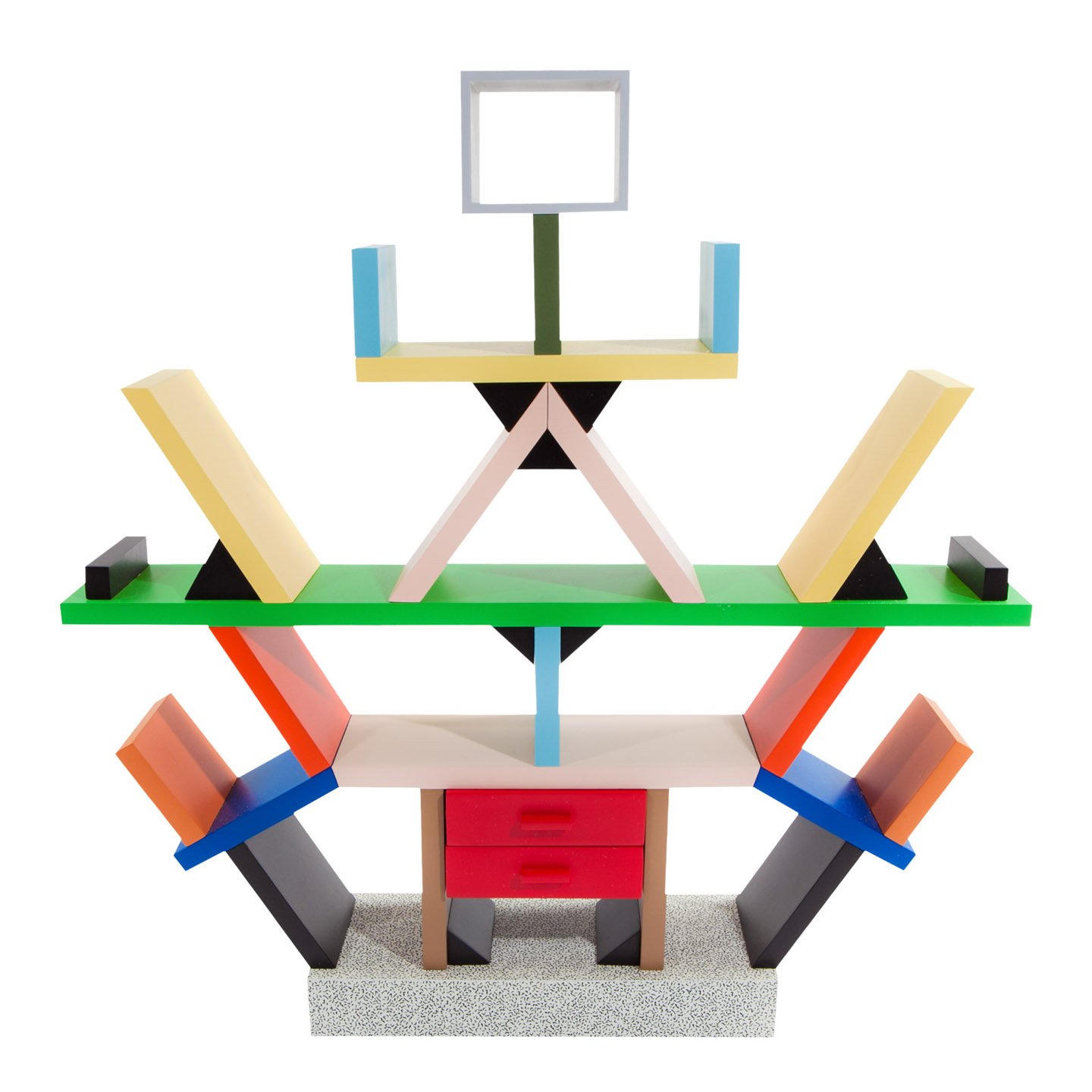 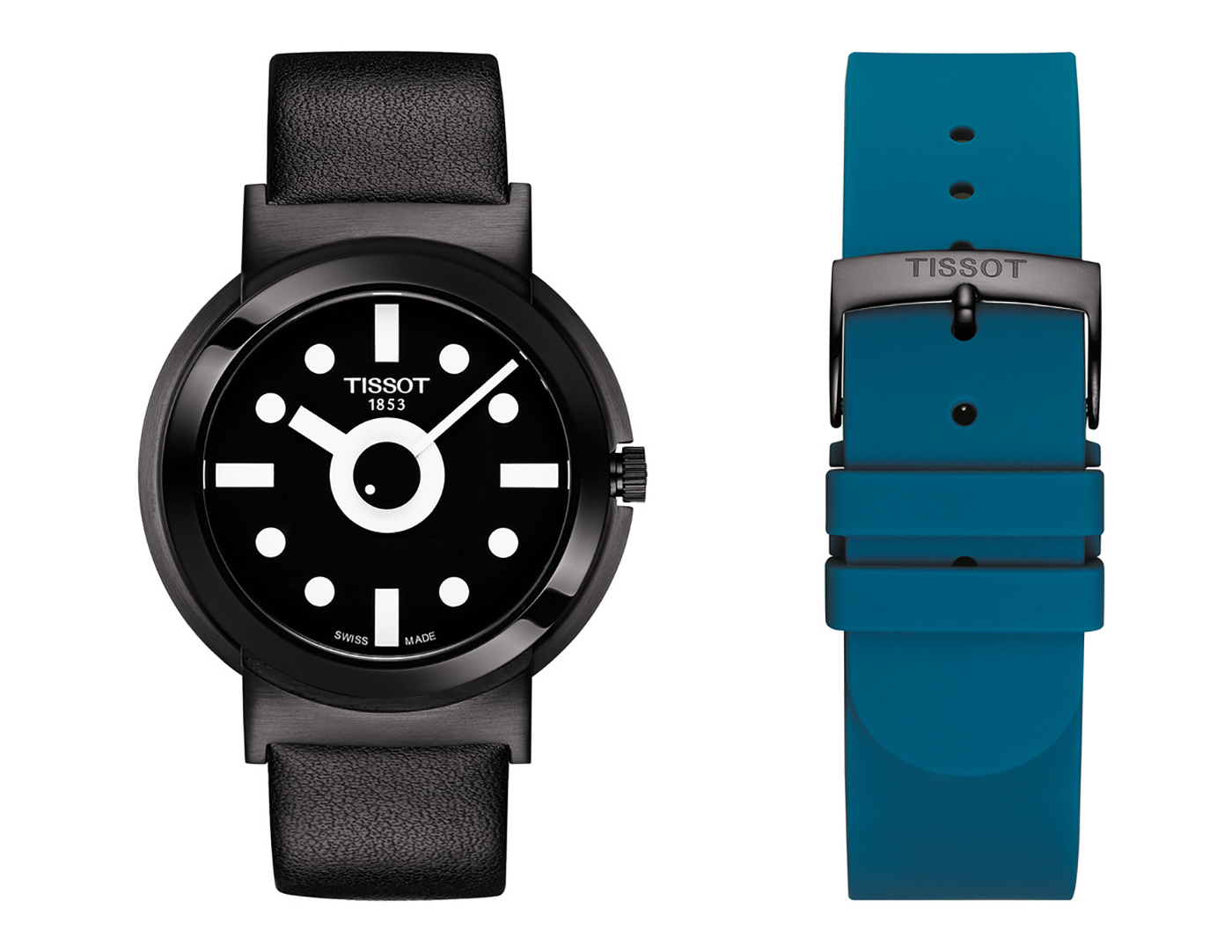