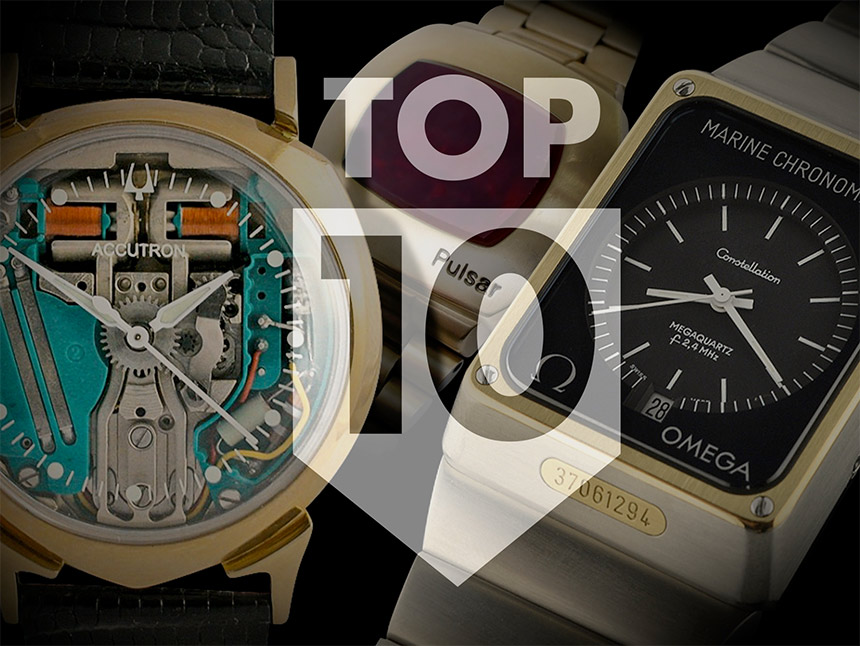 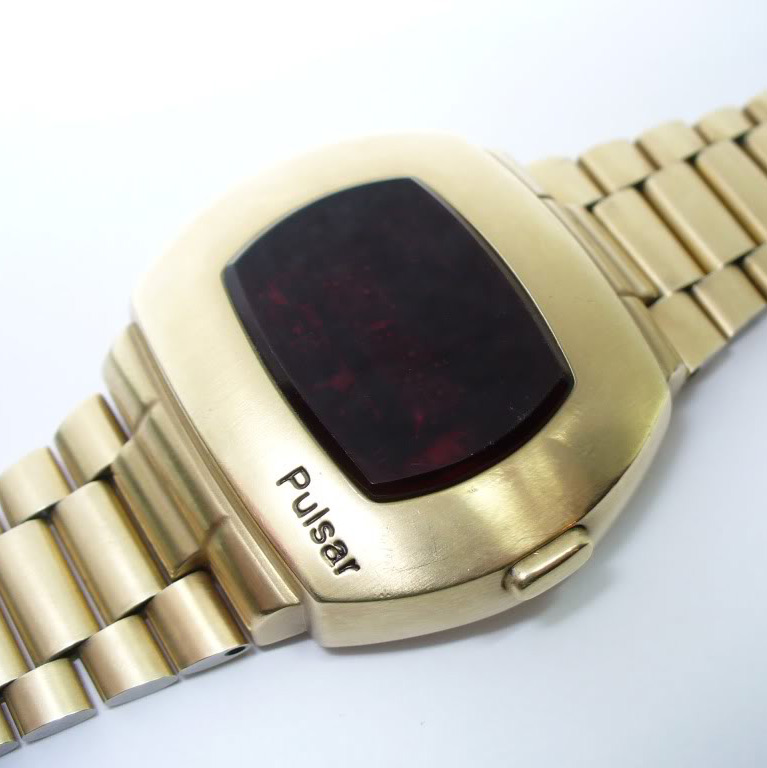 The first electronically powered digital watches captured people’s imagination with the introduction of the Hamilton Pulsar in 1970. Their displays with red numerals that lit up with a touch of a button seemed to fit perfectly with the “space age” and they became all the rage for a short-lived time.

Using light-emitting diode technology (LED), the time was displayed for only a second, but it caught the attention of not only the average consumer but many prominent people; from American Presidents such as Nixon and Ford, to actors Roger Moore and Jerry Lewis. The Pulsar was launched with a lavish press conference, which perhaps helped to distract the reporters from noticing that the watch had to be frequently sneaked out for a secret battery change. Priced at the cost of a Chevy Vega, or $2100, the Hamilton Pulsar wasn’t cheap. Despite its price, it became a sensation and the first 400 production models were sold immediately.

The LED digital watch’s main drawback was the limited capacity of the battery (typical for the time), and the power hungry display, which meant you had to press a button to view the time – quite an inconvenient drawback. However, the LED watch was superseded by the advent of the less power-hungry LCD watch with its continuous time display. 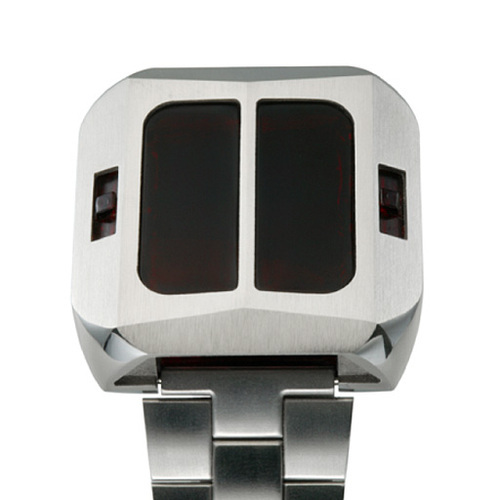 Solar watches have the capability to use the power of light from any natural or artificial light source and convert it into energy to power the watch. The first models appeared in the early 1970s. These early solar watches had unusual and innovative designs because of the large number of solar cells needed to power them.

First to market was the Synchronar 2100 developed by inventor Roger Riehl and released in 1972. Named the 2100 because it was programmed to display the correct month and day until the year 2100, it was a highly advanced watch that brought together a lot of the top technologies of the time. Its internal mechanism was sealed in a gel-like material called “Lexan” so it would pass strict shock and water tests, and was rated to a depth of 700m. It featured magnetically controlled switches, automatically adjusting for daylight savings time. The Synchronar looked the part too, with a space-age design where time was read on the side of the watch, and solar panels mounted on top in place of where typically the watch face would be.

The next important solar watch would be the introduction of the Citizen Crystron in 1976, with the first solar watch analog display. This was quite unusual-looking, as it had a traditional analog watch dial with a large array of four solar panels at its center.

It was ten years before any new solar watch innovations were made, but the introduction of the Eco Drive in 1996 brought with it some major advancements. These advancements made it possible to design watches without the need for conspicuous solar cells on the dial.

This is because the Eco Drive lets light travels through the special dial to be absorbed by a specially developed silicon light cell behind it. This generates electricity needed to power the movement and to usually store some in a rechargeable battery, as well. The battery power is used when no light is available for power. Eco Drive watches use lithium batteries and are capable of powering the watch for years in darkness. Of all the brands with solar-powered offerings, Citizen has remained the most committed to the development of solar watches. In 2003 they released the world’s thinnest light powered watch at just 4.4mm thick. 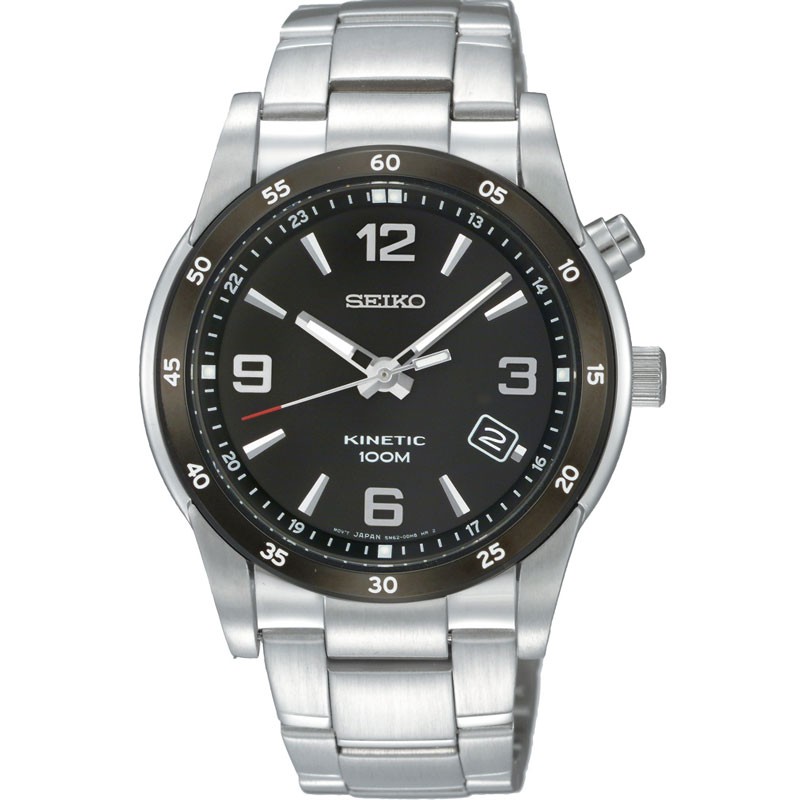 Seiko, having introduced the first quartz production model, looked to further its development with the release of the ground-breaking Seiko Kinetic movement. First releasing a prototype model in 1986 under the name “A.G.S” and then launching the first commercially available “Kinetics” in 1988.

Since then, they have released models ranging from low to high-end with the Ultimate Kinetic Chronograph in 1999 and Kinetic Perpetual in 2005. Other interesting models include the Kinetic Direct Drive with which the wearer can also generate energy by winding the crown and features two indicators showing not only power held, but power generation (from hand-winding).

The major innovation of the Seiko Kinetic movement is the use of a rotor – similar to an automatic or self-winding movement – but used to generate electricity from the wearer’s arm movement to power the battery (instead of winding the mainspring). This resulted in creating a quartz watch that was battery change-free. So, you have a watch that combines the convenience of an automatic mechanical watch with the accuracy of quartz. As an added bonus, it’s a watch more environmentally friendly, since there are no toxic batteries to dispose of.

Since the release of the Seiko Kinetic watches, other brands have developed their own versions of what are collectively called “automatic quartz” watches. ETA made a line of what it called “Autoquartz” movements, these could even be calibrated (unlike regular quartz watches) and were supplied to a range of brands, some even becoming COSC certified. 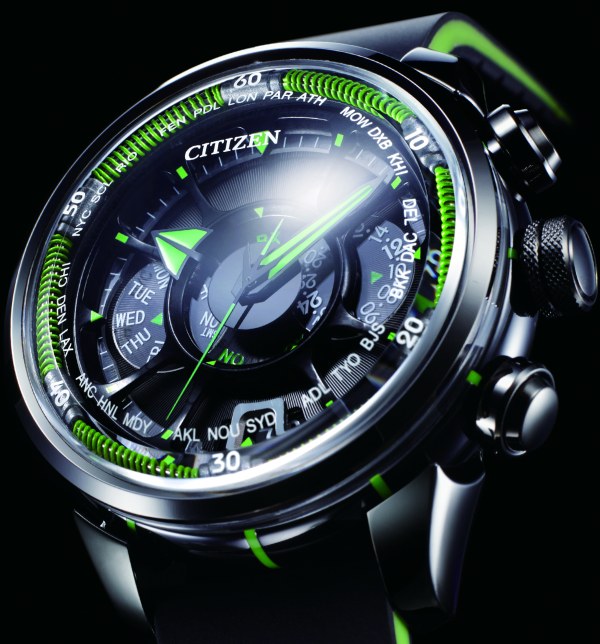 Towards the end of the 20th century, wristwatches that could connect to external devices began appearing. Casio released the first GPS watch in 1989 and in 1990 Junghans released the first watch that could synchronize itself with atomic clocks using radio signals. This gave it the advantage of being incredibly accurate. Since then, a number of brands have developed ranges of radio-controlled watches, in particular Citizen and Seiko. The main drawback for these type of watches is that they only work in areas where radio time signals are available.  If you live in the US, much of Europe, China, and Japan you can get atomic clock radio signals, everywhere else you are out of luck.  This leaves very large areas of the earth including the middle of the ocean where they are no better than regular timepieces.

Recently, Citizen and Seiko have overcome this obstacle by developing watches that can synchronize the time by connecting to satellites and updating their time, so now your watch can be hyper-accurate anywhere on the planet. The Citizen Satellite Wave Eco-Drive and Seiko Astron watch for instance, can not only set the time with satellite signals but can pinpoint the  precise latitude/longitude, automatically adjust to any timezone in the world and are accurate to within one second per 100,000 years. It is important to note that the two watches while thematically similar are quite different. The Seiko Astron came later but is arguably more advanced give its functionality. These are both important pieces in their own right.

Bluetooth connectivity is an area that has seen a lot of interest particularly in the area of smartwatches lately. A partnership in 2006 between Sony and Ericsson led to the development of one of the first Bluetooth watches capable of making and receiving calls and SMS messages. More recently smartwatches such as the Pebble come with Bluetooth 4.0 support and has apps so you can connect Apple devices running iOS 5 or later and Android 2.3 or later.

For those looking for something more rugged, Casio have just announced a couple of G-Shock models with Bluetooth (GB-6900B / GB-X6900B) both have Bluetooth 4.0LE and are capable of receiving calls and text-message notifications (with sound and vibration), as well as automatic time updates from an iPhone.

For people with BlackBerry phones, there is the InPulse smartwatch which connects wirelessly to Android smartphones and to laptops running OSX, Windows or Ubuntu. A more unconventional smartwatch announced earlier this year is the Swiss-made Hyetis Crossbow. It features an analog-style watch face, a 12mm mechanical movement, comes with Bluetooth, WiFi, NFC, and GPS connectivity and boasts a 41 mega-pixel camera.

No doubt electronic watches will continue to bring us novel and innovative designs that push the boundaries of wrist-mounted functionality.