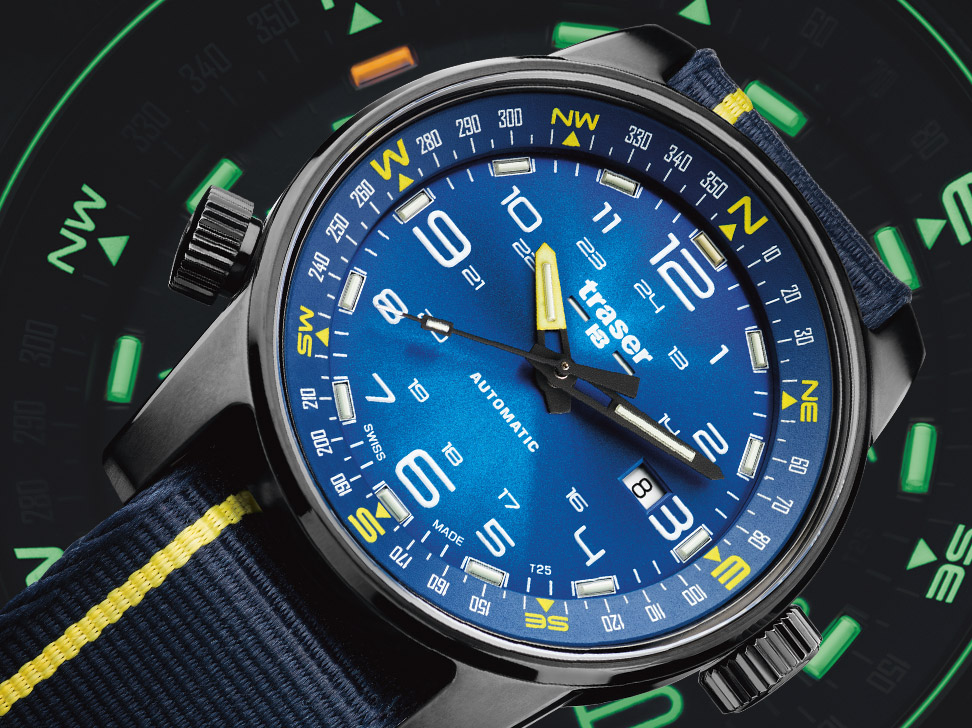 Any watch using self-illuminating tritium gas tubes has probably been supplied by the Swiss company MB-Microtec. The company also makes its own watches, mostly “tactical” in theme and design, under the name Traser, and they have just unveiled their newest model. The new Traser P68 Pathfinder Automatic is a 46mm field watch with an integrated compass ring and, of course, tritium gas vials for illumination. For Traser, the new watch represents a new feature for them with the internal compass ring as well as an additional automatic in their mostly quartz-powered collection. 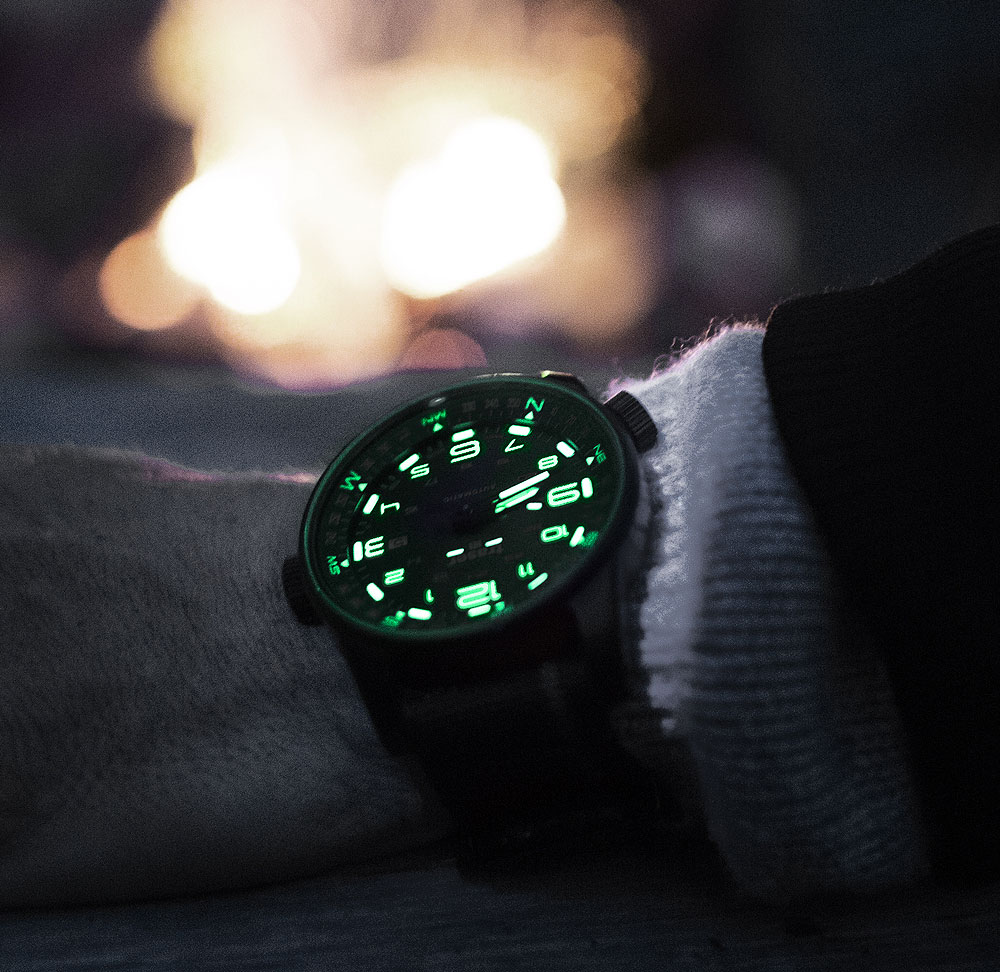 Well-known within the military community for decades, Traser were one of the earliest adopters of tritium gas illumination, which they call “trigalight.” More commonly known as gaseous tritium light source (GTLS), this technology of small tritium gas-filled vials allows the watch’s hands and hour markers to glow brightly without prior exposure to light, making these watches perfect for nighttime viewing or tactical operations. As you’d expect, the new Traser P68 Pathfinder Automatic makes ample use of “trigalight” as well as the more commonly used Super-LumiNova to create a real lume show for all the “ill-lume-inati” out there. See more about tritium gas tubes, how they are made, and all about the company in our visit to the MB-Microtec manufacture here. 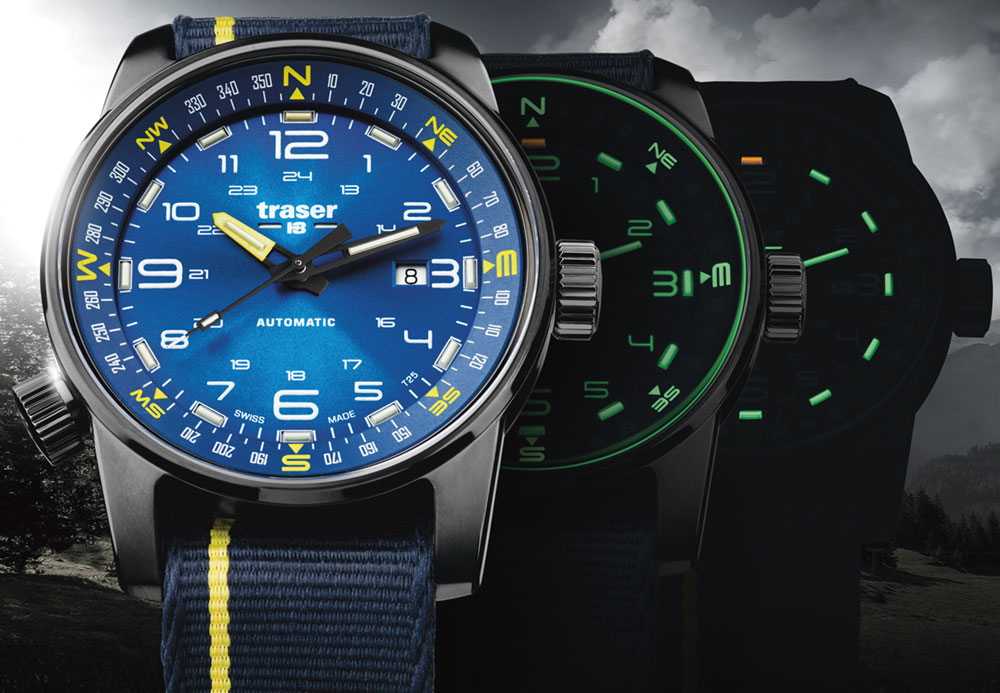 The majority of Traser’s lineup feature all-black dials and PVD coated black cases, and the new Traser P68 Pathfinder Automatic sports a black dial version called “Black Hole” as well as one with a “mystical Midnight Blue dial” which Traser states is intended to remind one of “the infinity of the universe.” Whether it evokes something that profound for you or not, the dial is a deep metallic blue color with printed, Super-LumiNova-coated white Arabic hour markers as well as a 24-hour scale for keeping military time. Traser is so excited about the Midnight Blue they almost forgot to tell us about the Traser P68 Pathfinder Automatic Black Hole model, which is also handsome with a black sunray finished dial. 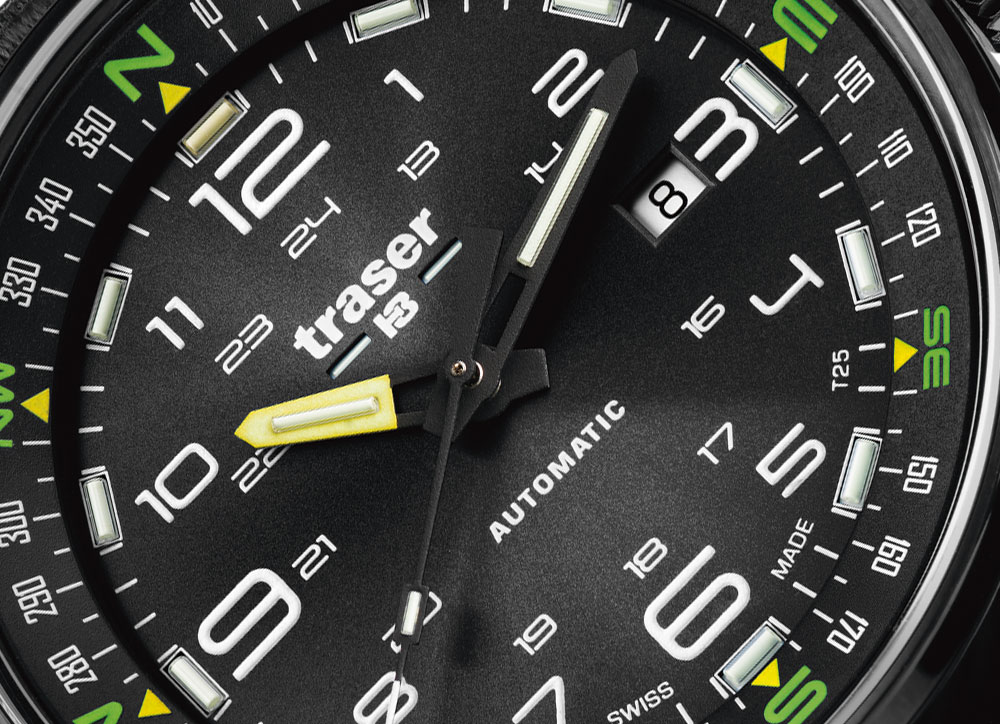 Surrounding the hour markers are tritium vials which glow green. The hands are relatively straightforward with a stick minute hand and a yellow painted hour hand, both of which also have their own green tritium vials. Tracking the seconds is a sweeping black hand with a tiny tritium vial of its own. A black on white date wheel is in its usual spot at three o’clock. Yet another dose of Super-LumiNova is applied in the form of a ring which goes all the way around the chapter ring and dial – just for fun, I guess. 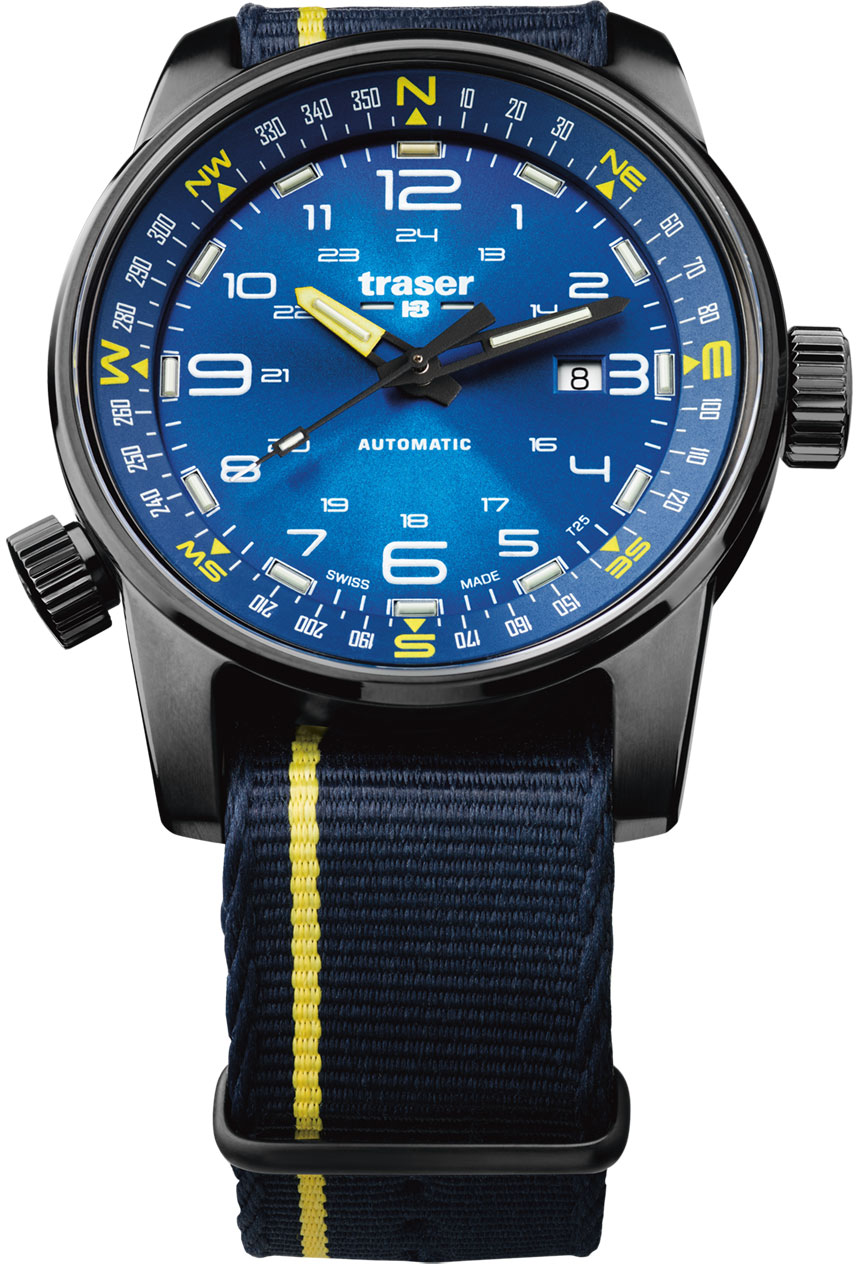 Around the dial is an internal bezel which is operated by the crown at eight o’clock and printed with typical compass markings. A cool feature here is that the cardinal and inter-cardinal compass points are also lumed. This particular compass feature is operated (in the Northern Hemisphere anyway) by holding the watch horizontally, aligning the hour hand with the Sun, and visually bisecting the distance between the hour hand and the twelve o’clock marker to find South. Once you’ve done this, you can rotate the compass ring to indicate the cardinal directions and, theoretically, find your way. Ironically for a watch which is dripping with Super-LumiNova and GTLS vials, this method of wayfinding assumes daytime use and a clear view of the Sun. 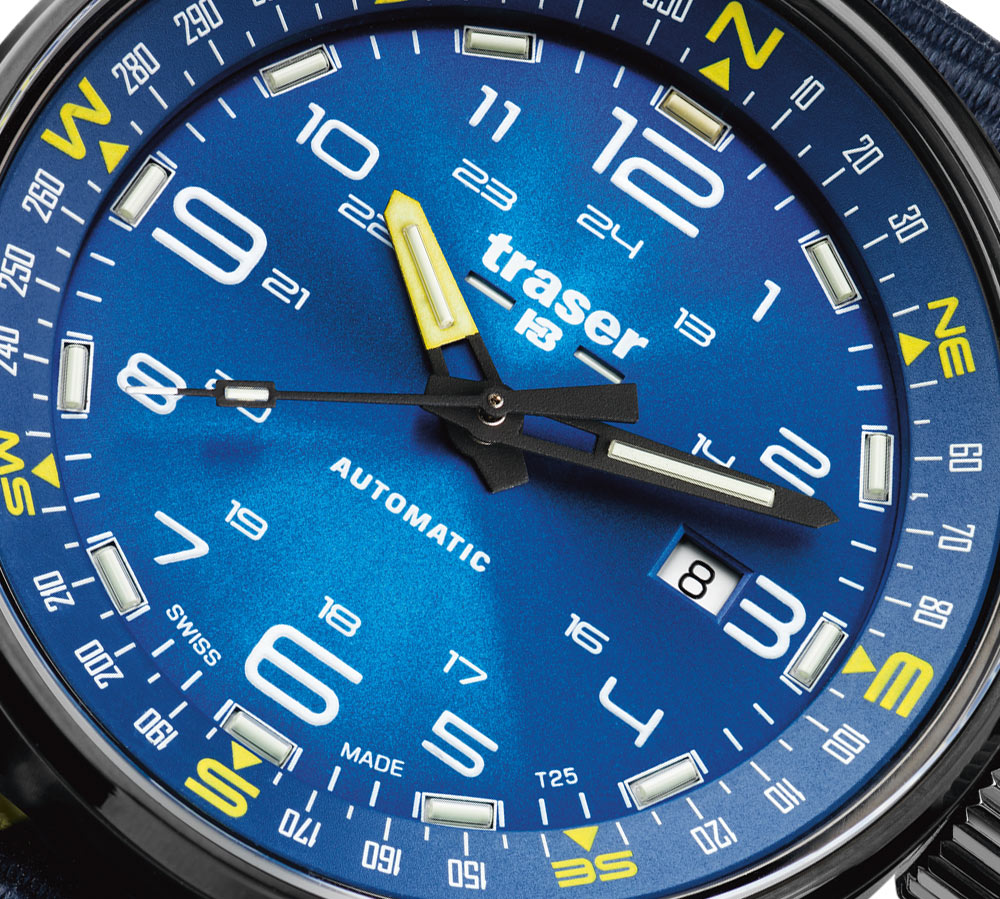 Like most Traser cases, the Traser P68 Pathfinder Automatic is a straightforward, if huge, PVD-coated stainless steel model with alternating brushed and polished surfaces. The Traser P68 Pathfinder Automatic also has a screw-down crown (enabling 100m of water-resistance) at a less familiar eight o’clock position which is intended to keep the crown from digging into the back of your hand. An anti-reflective sapphire crystal rounds out the durable and tactical package. Traser have chosen not to publish the actual name of the Swiss automatic movement being used, though we feel comfortable assuming it is either the ETA 2824 or the near identical Sellita SW-200 as in their other watches. Keeping the whole thing on the wrist is a matching midnight blue nylon NATO-style strap with a complementary yellow stripe. 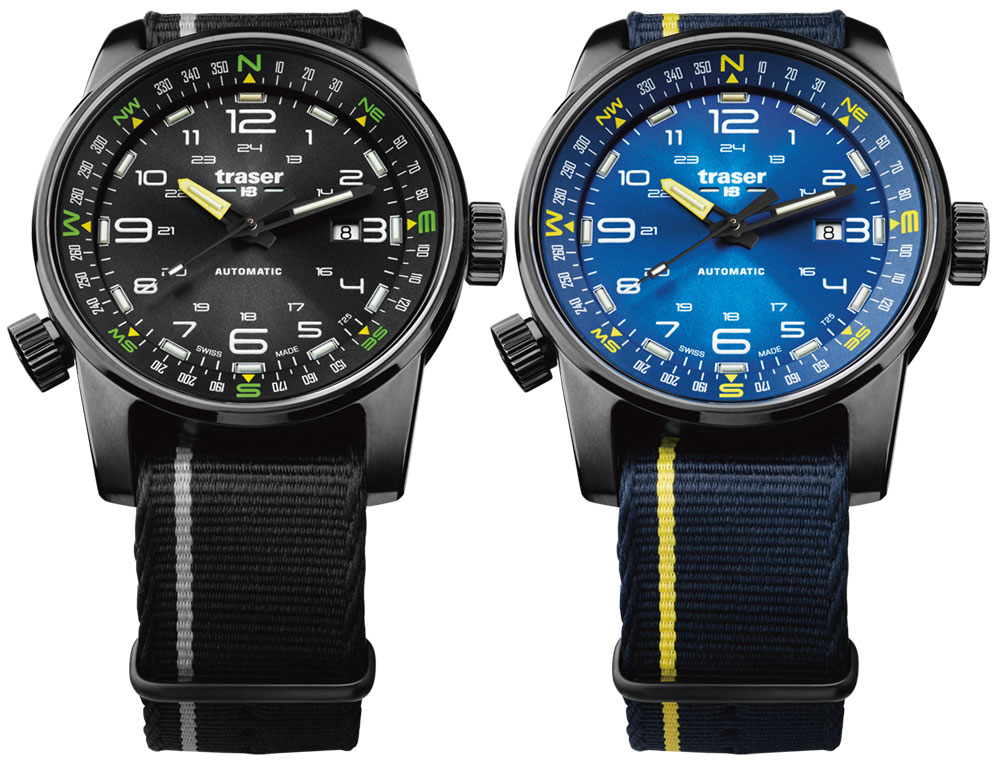 While not a huge leap for the brand, it is nice to see a new and slightly less “tactical” Traser coming out, especially in a configuration other than all-black – even though the brand also recently released bright, neon-colored P67 Officer Pro watches (hands-on here). The internal compass ring, more novelty than necessity, does add some potential use for the adventure-minded wearer in a pinch. A reasonable 895 CHF retail price should make the Traser P68 Pathfinder Automatic Midnight-Blue a viable option for the large-wristed, tactically minded buyer in the market for an automatic which does a bit more than tell time. traser.com