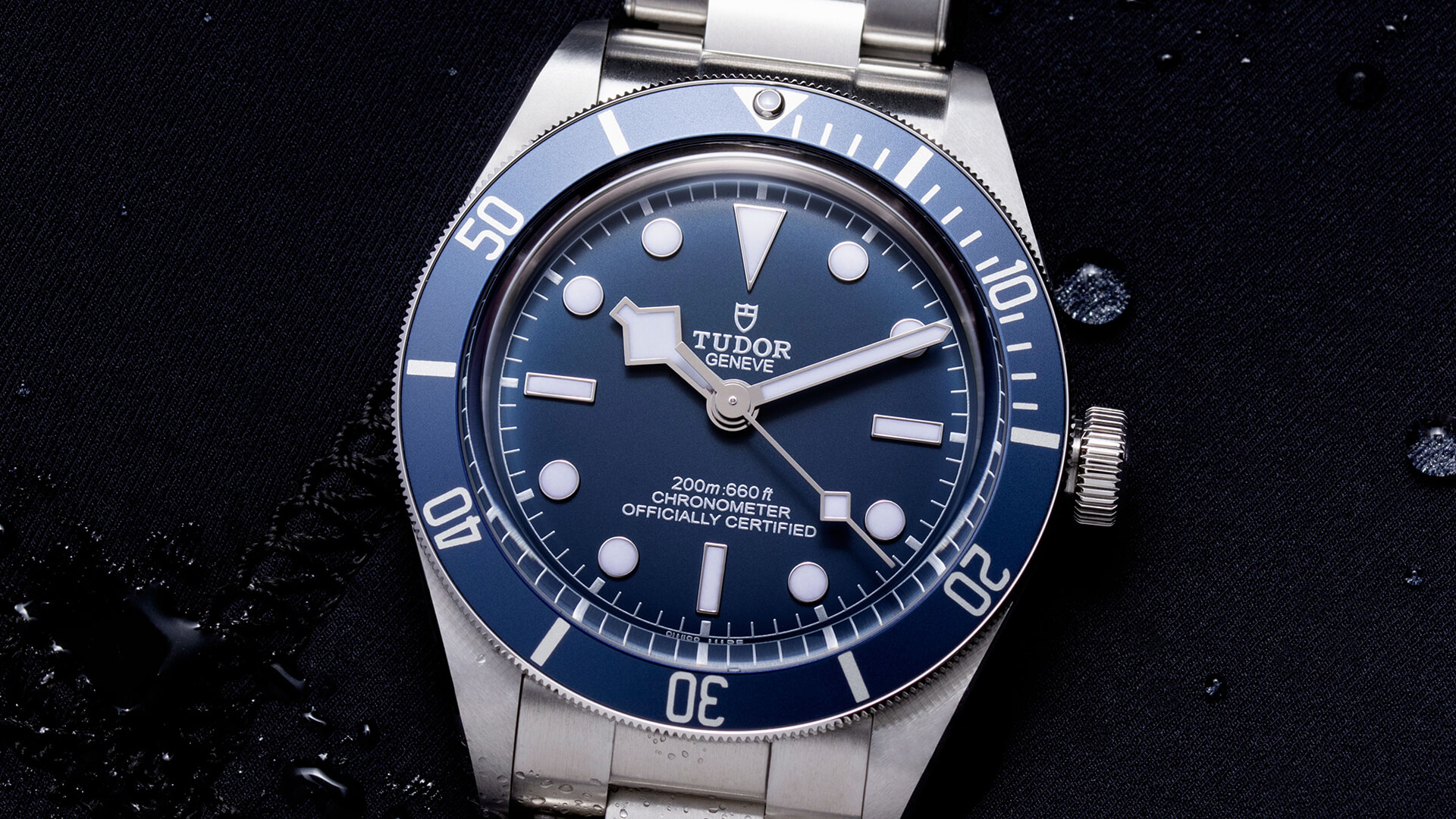 Since the introduction of the wildly popular vintage-sized Black Bay Fifty-Eight diver in 2018, the Tudor brand faithful have been waiting for the marque to explore the new, more compact iteration of the modern classic Black Bay Fifty-Eight diver in more variations. These hopes have been answered for 2020, as the Fifty-Eight line has just added a new model inspired by the classic Tudor Submariner “Blue Snowflake” of the late ‘60s and ‘70s, as made famous by the French navy. The new Tudor Black Bay Fifty-Eight “Navy Blue” feels like a perfect storm of every element in the current luxury watch zeitgeist, with a modest size, vintage-inspired design pedigree, deep blue color scheme, and a remarkably reasonable price point. 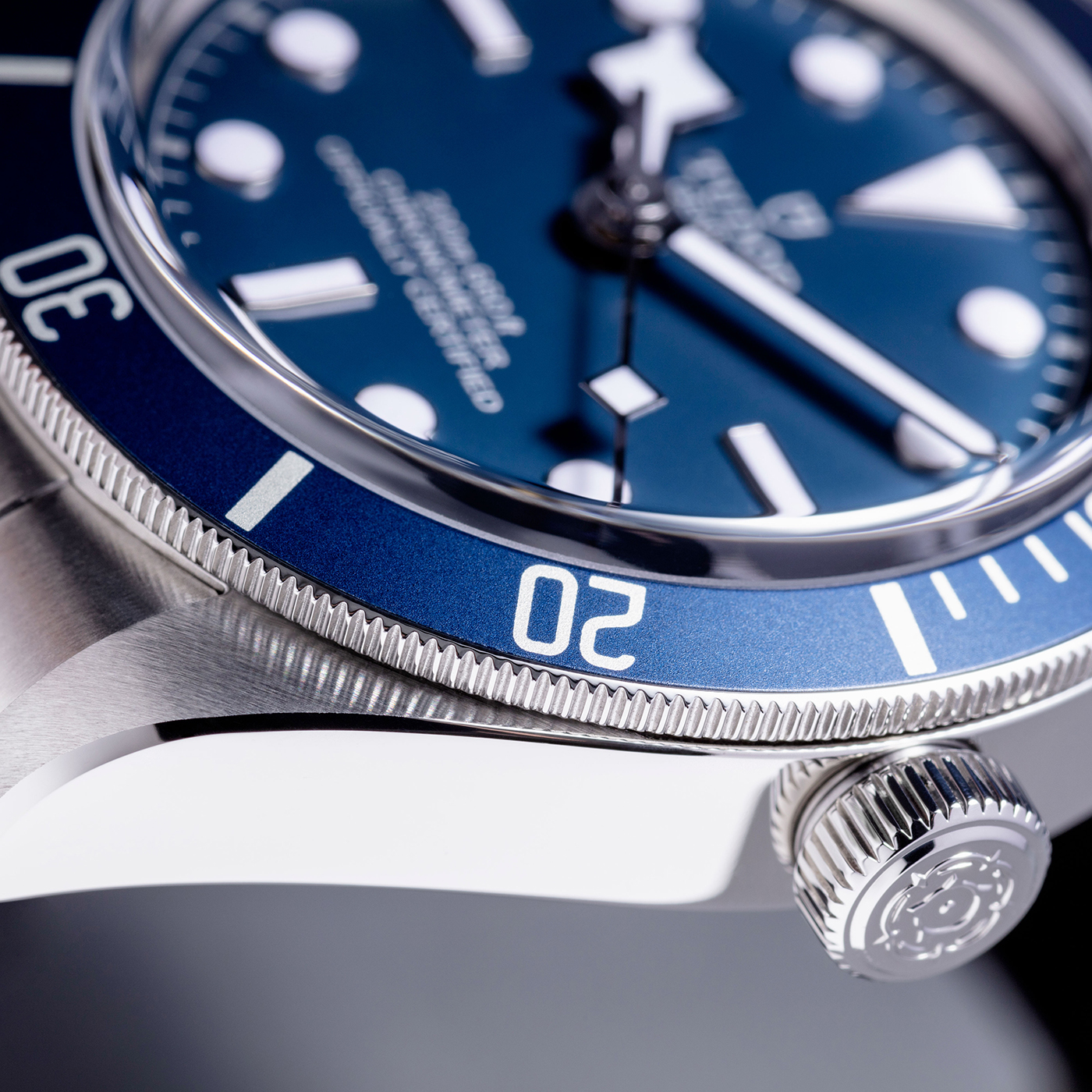 The 39mm stainless steel case of the Tudor Black Bay Fifty-Eight “Navy Blue” maintains the compact and balanced proportions of its black dial stablemate. With a classic slab-sided diver shape and large unguarded screwdown crown, the Black Bay Fifty-Eight displays its brand DNA front and center, with just enough changes to the original design to create a modern classic in its own right. Where the “Navy Blue” sets its own course, naturally, is the matte blue aluminum bezel. Keeping the same unmistakable Submariner-style diver insert as previous models, the new color helps to soften a design that can at times veer too sharply angular, while tying back to the classic “Blue Snowflake” Tudor Submariner. 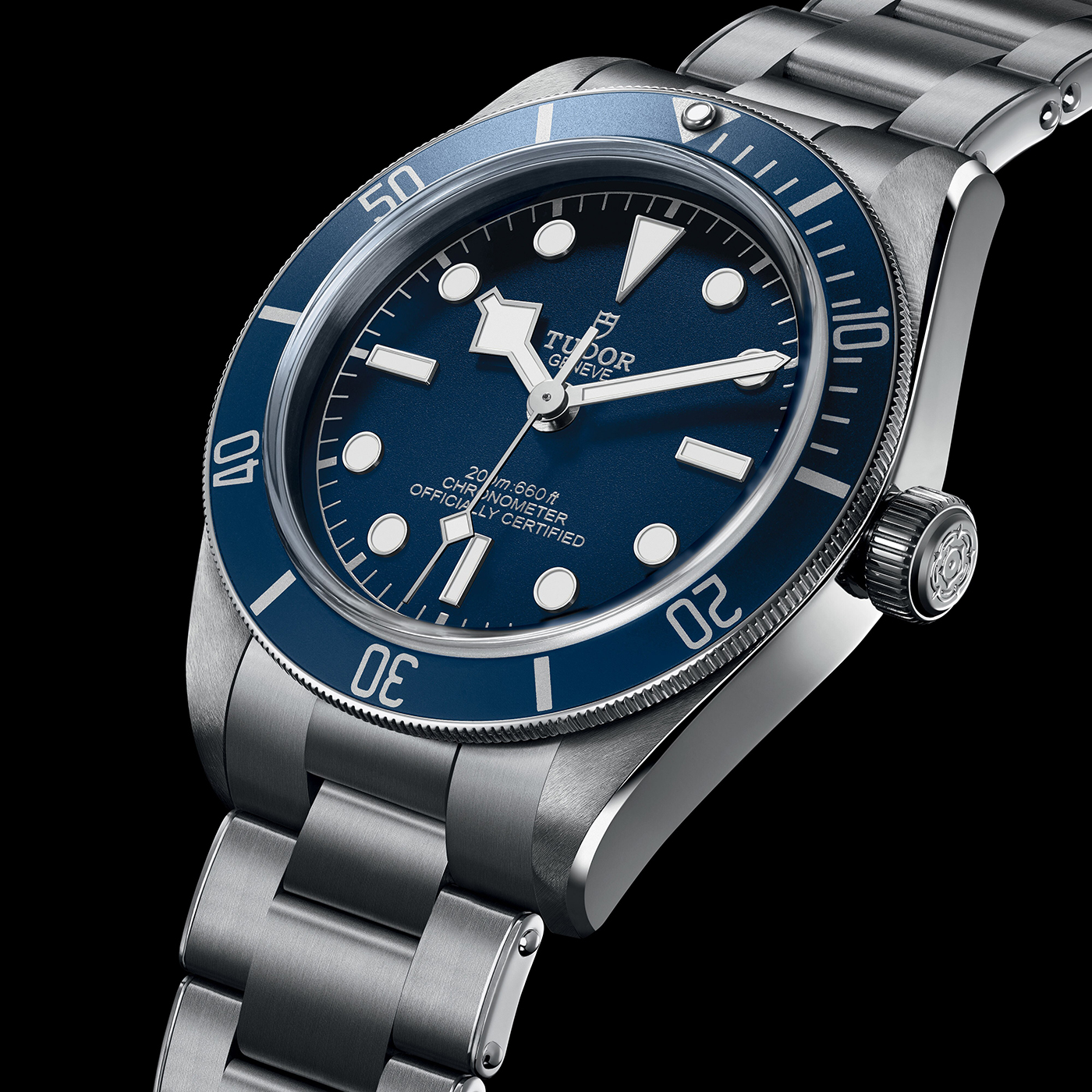 Like the case, the dial of the Tudor Black Bay Fifty-Eight “Navy Blue” keeps the Black Bay’s form intact while allowing a new color to alter the feeling of those same elements. Where the first Black Bay Fifty-Eight (and the larger Black Bay models, for that matter) felt like a stylistic product of the late ‘50s or early ‘60s, the “Navy Blue” drags that same elemental diver layout into the early ‘70s visually. Gone is the heavy black dial and gilt text with their Sean Connery associations, replaced by a lighter and more fresh medium blue treatment. The end result still feels vintage, still definitely like a historic timepiece, but it’s more playful and more directly nautical than its predecessor. If the black dial Fifty-Eight is Sean Connery, the “Navy Blue” is Roger Moore – looser, more willing to crack a joke, but still more than capable of action should the need arise. Of course for those looking for an exact reinterpretation of the “Blue Snowflake” Submariner, there’s still the divisive mix of snowflake hands and round indices, but after so many years of the Black Bay this mismatched pairing has grown to become an icon of its own. 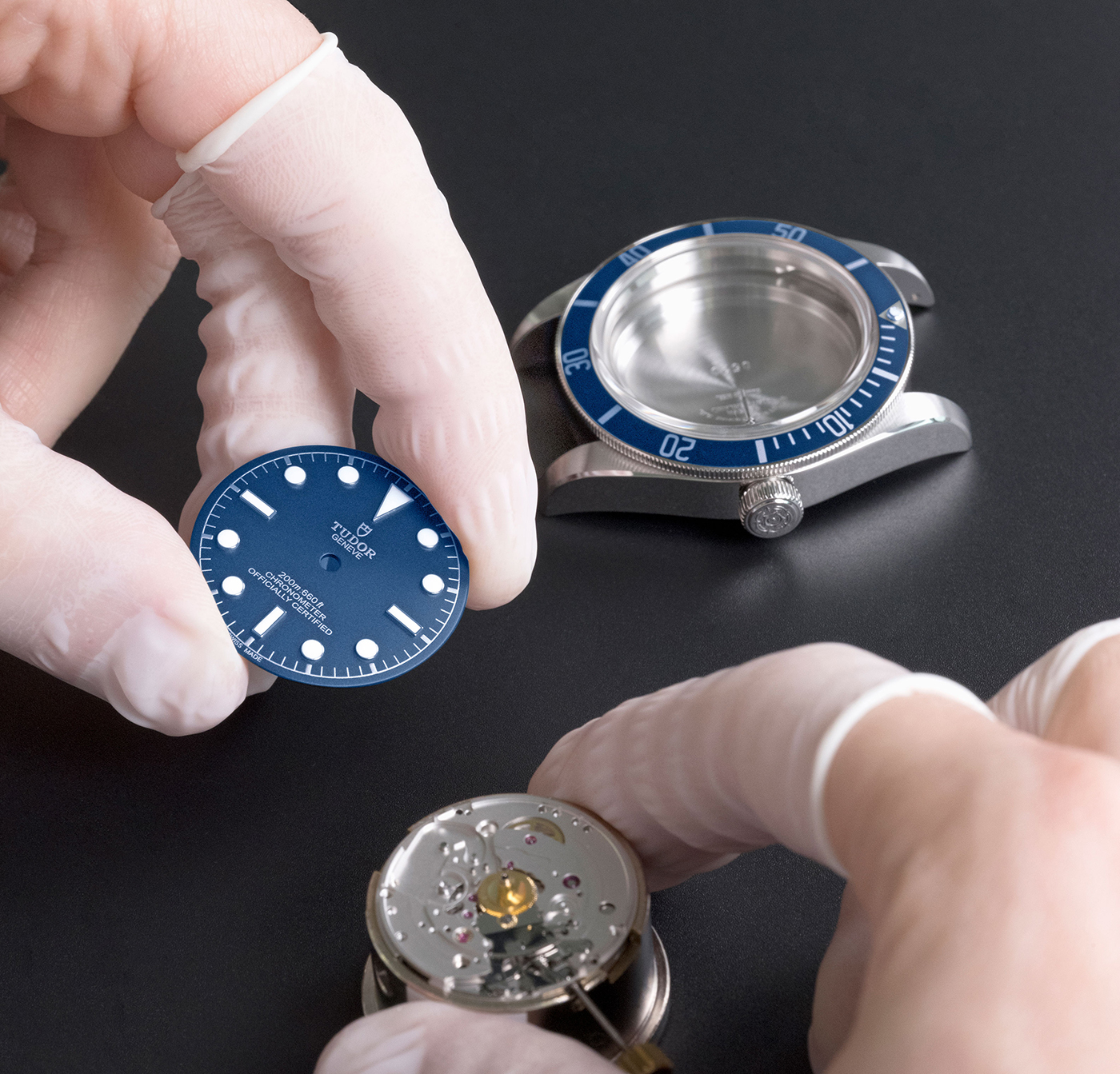 Tudor powers the Black Bay Fifty-Eight “Navy Blue” with the manufacture Calibre MT5402 automatic movement. This COSC chronometer certified powerplant offers a handful of impressive technical innovations, including a variable inertia balance with a silicon balance spring. These come together to provide not just chronometer grade accuracy, but a 70 hour power reserve at a relatively high 28,800 bph beat rate. 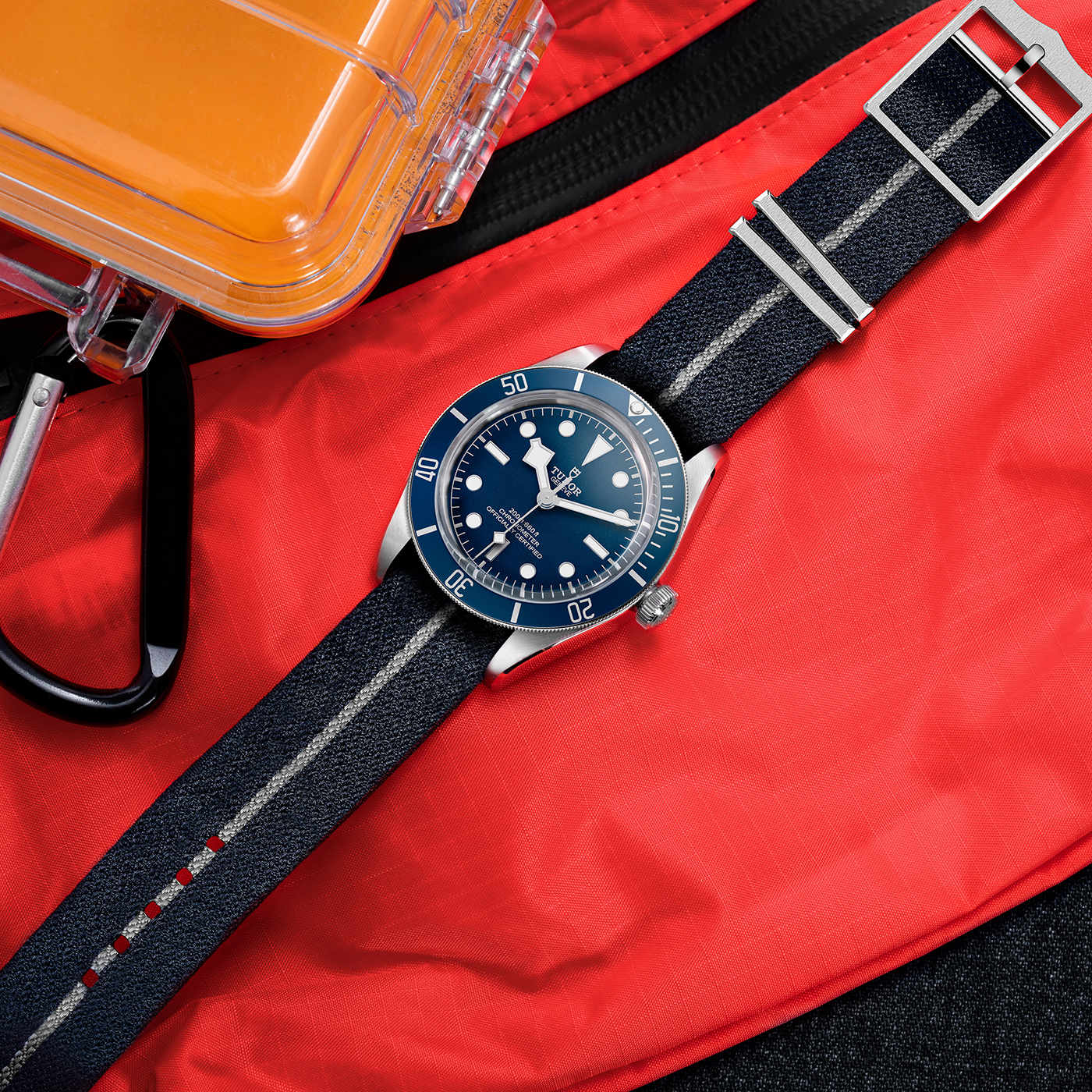 There’s a fair amount of choice when it comes to strap options on the Tudor Black Bay Fifty-Eight “Navy Blue.” The most classical choice is the stainless steel rivet oyster bracelet, with some of the best fit and finish in its price class, but those looking to accentuate the new blue colorway have two alternatives. The first is a single pass fabric strap in jacquard woven navy blue, featuring an eye-catching complementary central stripe in silver. The more unorthodox option looks at first balance to be medium blue suede. On closer inspection, however, this strap is made from a synthetic “soft touch” material with a consistency not unlike flannel. 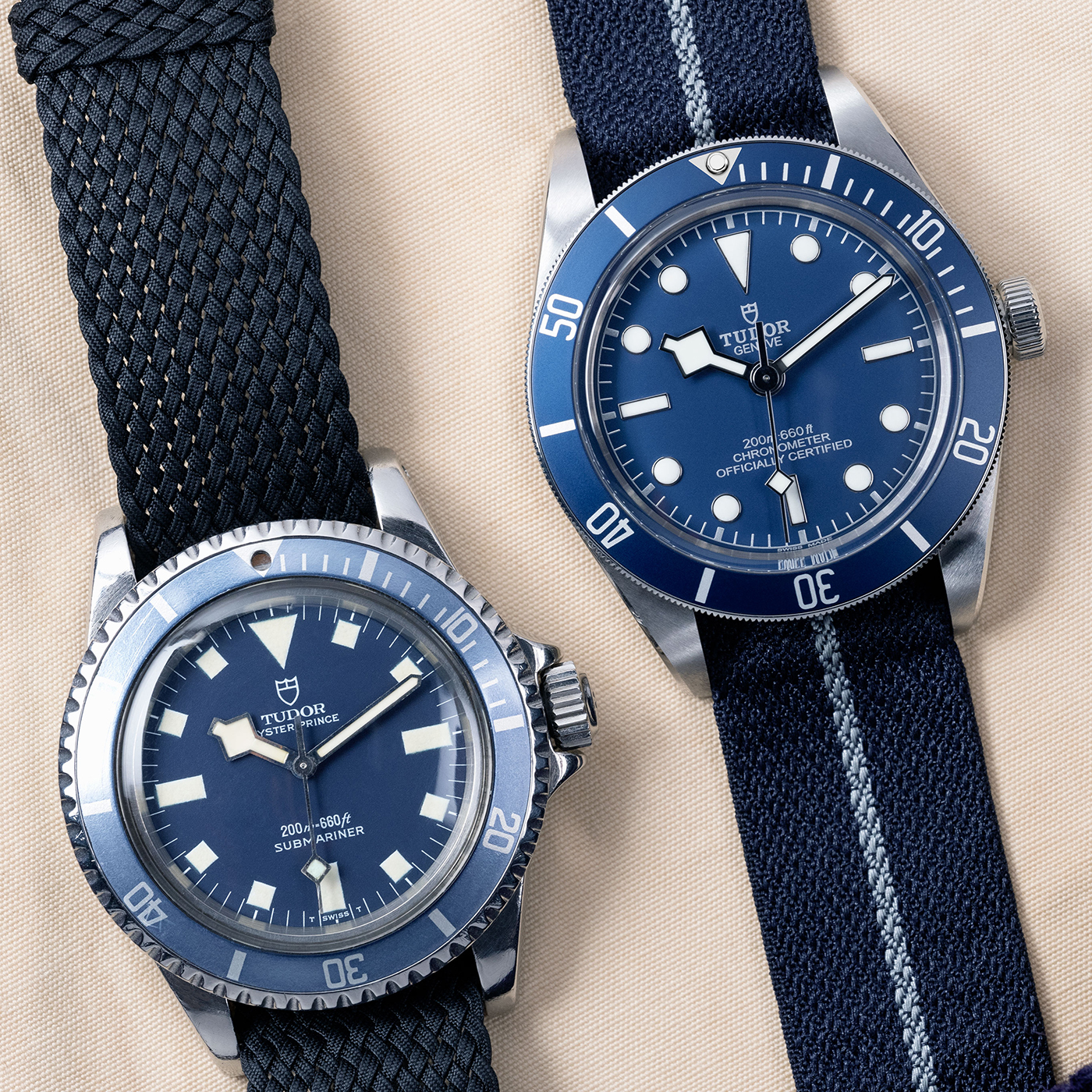 While it’s far from an unexpected addition to the brand’s lineup, the Tudor Black Bay Fifty-Eight “Navy Blue” helps to extend one of its hottest lines in a new and undoubtedly popular direction. As an effective tribute to the “Blue Snowflake” Submariner, it offers enthusiasts a truly attractive alternative to breaking the bank on skyrocketing vintage prices. The Tudor Black Bay Fifty-Eight “Navy Blue” is available now through authorized dealers at an MSRP of $3,375 on straps and $3,700 for models with the rivet bracelet. For more information, please visit the brand’s website.