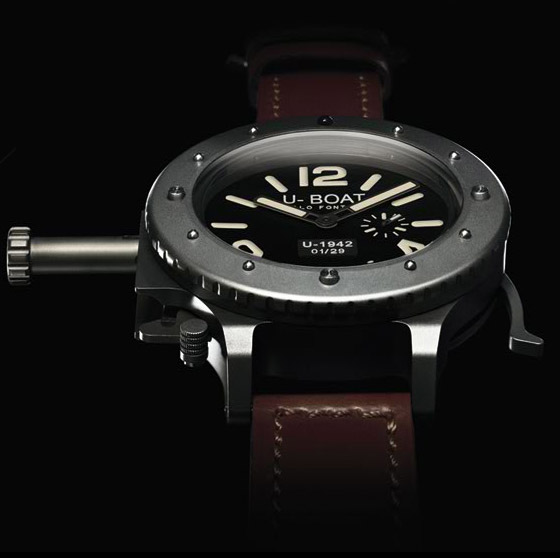 Apparently based on a never actually made design from 1942, the limited edition U-Boat U-1942 watch is an Italian blast from the past. The story goes that the Italian Navy commissioned a special watch to be made, but it never made production. This U-1942 watch is based directly on that design – and it is really sharp looking. The oddest part of the watch is of course the crown. It extends out.. maybe too far.  It is kind of silly and phallic to be honest. I mean it works, and looks cool, but you know…. Lets just say that it looks like a periscope…yea that’s it. The crown is meant to have a functional use though. The idea is that it is meant to be easy to use with gloves. Easy to use meaning winding it and adjusting it. Not sure how easy it will be to release the crown while in the locked position with gloves though, but probably pretty simple. Further, I believe that the crown can be adjusted and wound underwater… which should be nice.

The watch is big! Really big with a grade 5 titanium case of 64.4mm wide and over 18mm thick. What a beast! At least being in titanium it won’t be too heavy. This takes massive watches to a new level. The sweet looking diver’s bezel rotates in both directions and has a special lever that locks it into position and keeps it from rotating. The design certainly has a lot of Ennebi in it, which itself is based on retro Italian looks. So all in all this is cosmetically “very Italiano.” The darkened case is water resistant to 400 meters, with a great looking dial that shares a design theme with Panerai watches. Interestingly enough the watch hands are done in German Silver (which does not actually contain any silver). 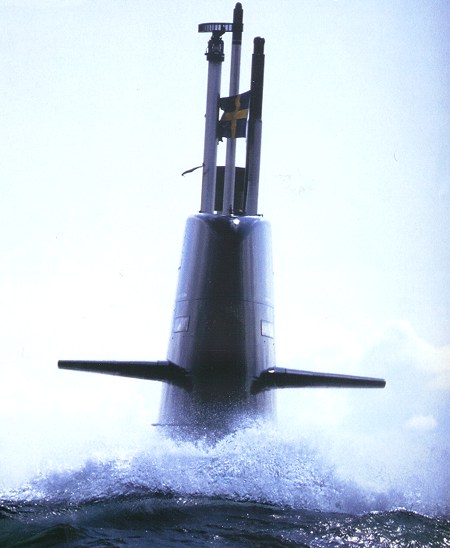 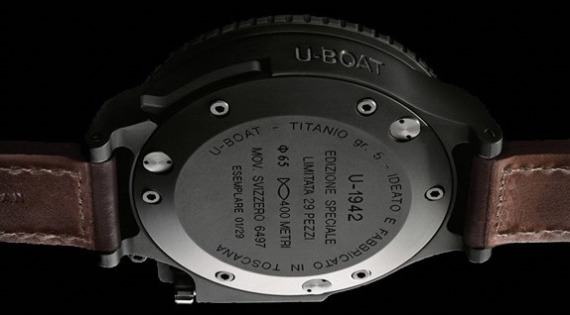 Nothing completes a traditionally styled Italian diver watch like a rich brown thick cordovan leather strap – with a large titanium buckle. Inside the watch is a Swiss Unitas 6497 manually wound movement. It is a solid movement, and ideally decorated a bit, though a really simple movement. U-Boat, and other brands like this movement a lot, but I’d like to see them mix it up a bit with a little more variety. For the serious collectors, this movement is not as exciting as the outside of the watch is. Still, buyers of this U-1942 watch will be proud owners due to the cool design – which it certainly is. I do like how U-Boat always places in the cute little subsidiary seconds dials. They just sorta look charming don’t they? Of course the dial is covered with lots of lume, and is quite legible.

The U-Boat U-1942 watch is a limited edition of just 29 pieces – really not that many to satiate the U-Boat fans out there, of which there are a lot. Not sure about pricing, but given standard U-Boat watches, I would say that we are talking at least $5,000, probably more.