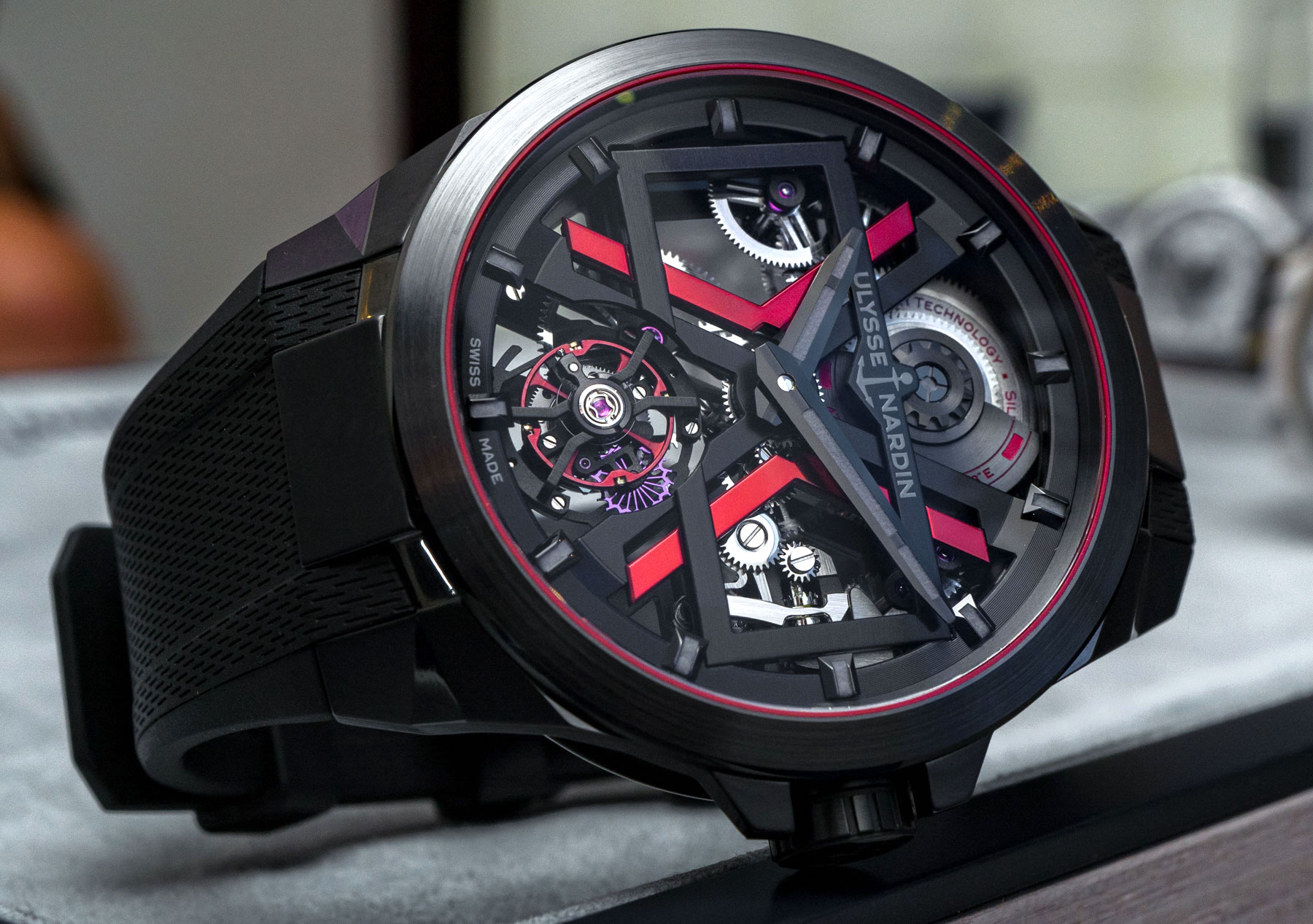 The Ulysse Nardin Blast is a fresh collection from a 174-year-old manufacture. In recent years Ulysse Nardin has been especially courageous in pushing its own, as well as the greater watch design, envelope. More to the point, while the Blast may have a loud name and the looks to match, it also is full of novel and rather inspired engineering and watchmaking solutions. 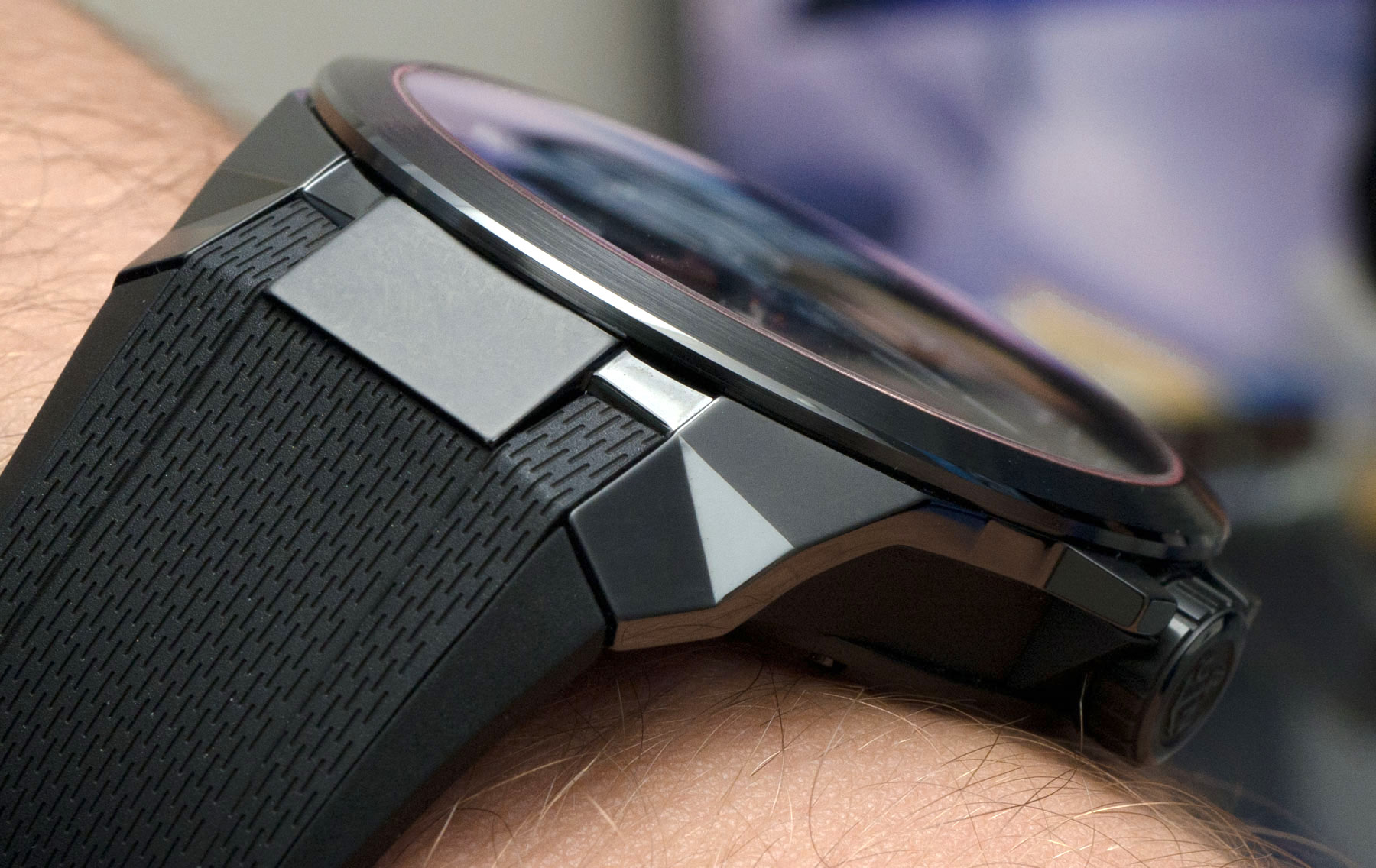 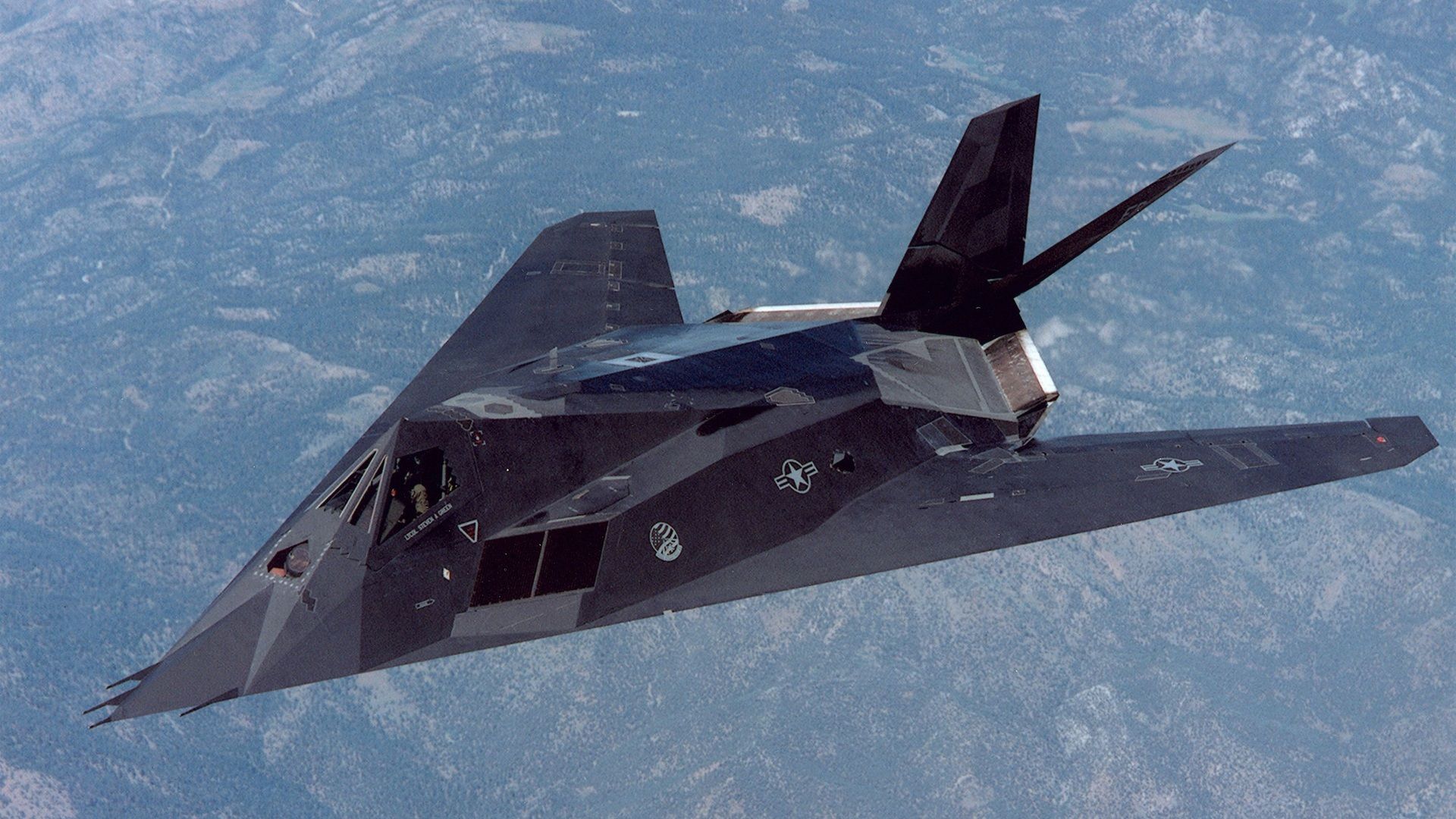 “When we started on the Blast collection, I showed this picture to my colleagues,” says Jean-Christophe Sabatier, Chief Product Officer at Ulysse Nardin. That’s fancy speak for “the product guy,” a position that appears to have been eliminated at a shockingly high number of historic brands (but that’s another story you might have seen complaints about here, here, and here). The picture? A stealth bomber. I look at it and call it out: It’s the Lockheed F-117 Nighthawk, not exactly an unknown image for any ’80s born kid (right next to the Lamborghini Countach and perhaps that tennis player scratching her rear end). A divisive thing like any weapon of war, the F-117 was introduced in 1983 and retired in 2008, giving it plenty of time to influence the taste of those fortunate new generations growing up in war-free environments of the developed world. 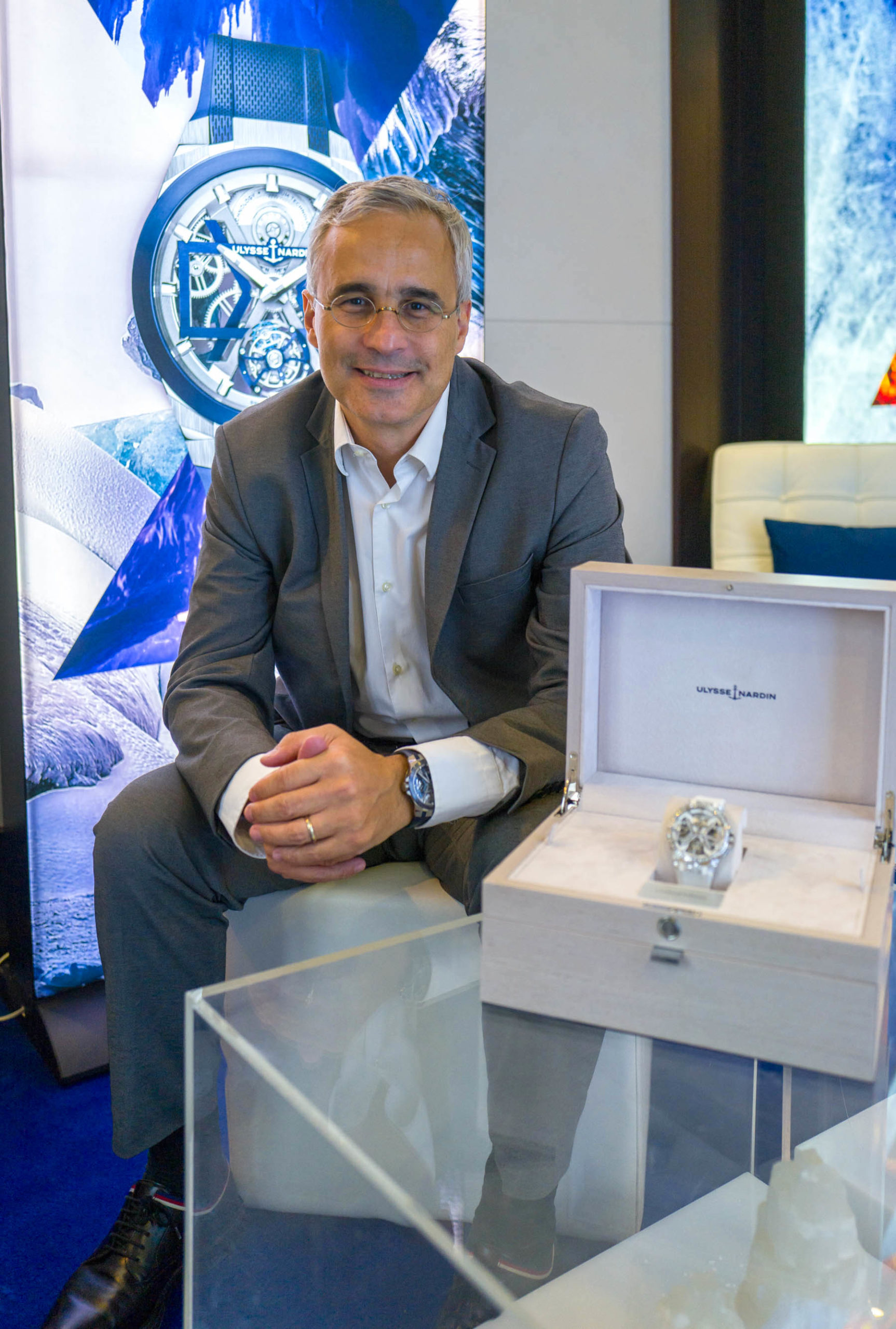 The point with the F-117 was to try to create a watch that at least aspires to be as high-tech, focused, and yes, in the eyes of at least some, as cool as such an iconic airplane. And you know what? We may not agree, but I have concluded that the watch industry could do with more of this approach and less of the sleep-inducing vintage, heritage, anniversary, revival borefest. This would result in an amazing number of new watches the majority of us wouldn’t want to own — and at least some refreshing, entertaining new watches that we would. Either way, the safe space of big-group watch brands would become all the more fascinating and, in the long run, more competitive against the increasing number of competent newcomers who have been stealing their thunder. Again, this is where Ulysse Nardin has earned praise for standing out from the majority of other big names. 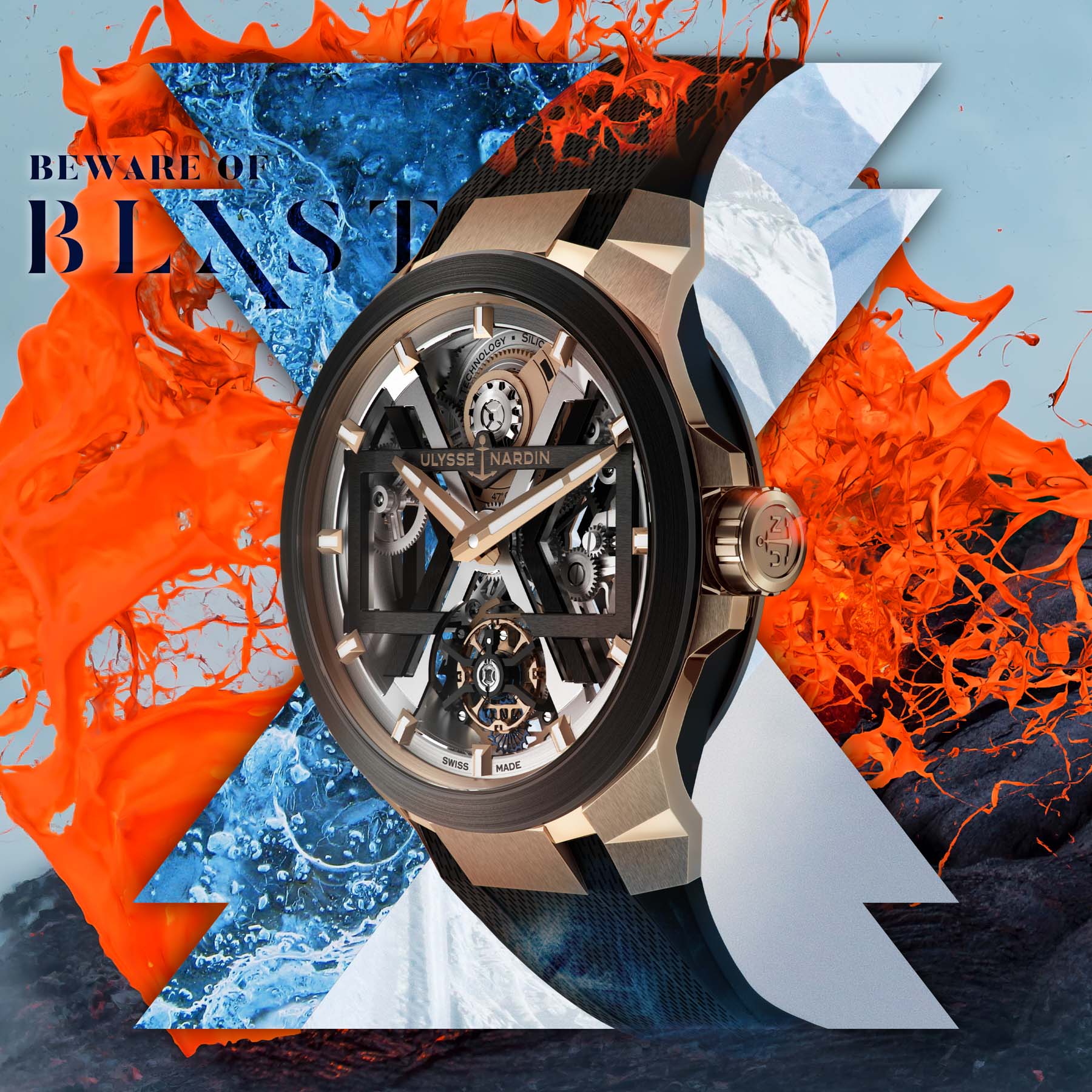 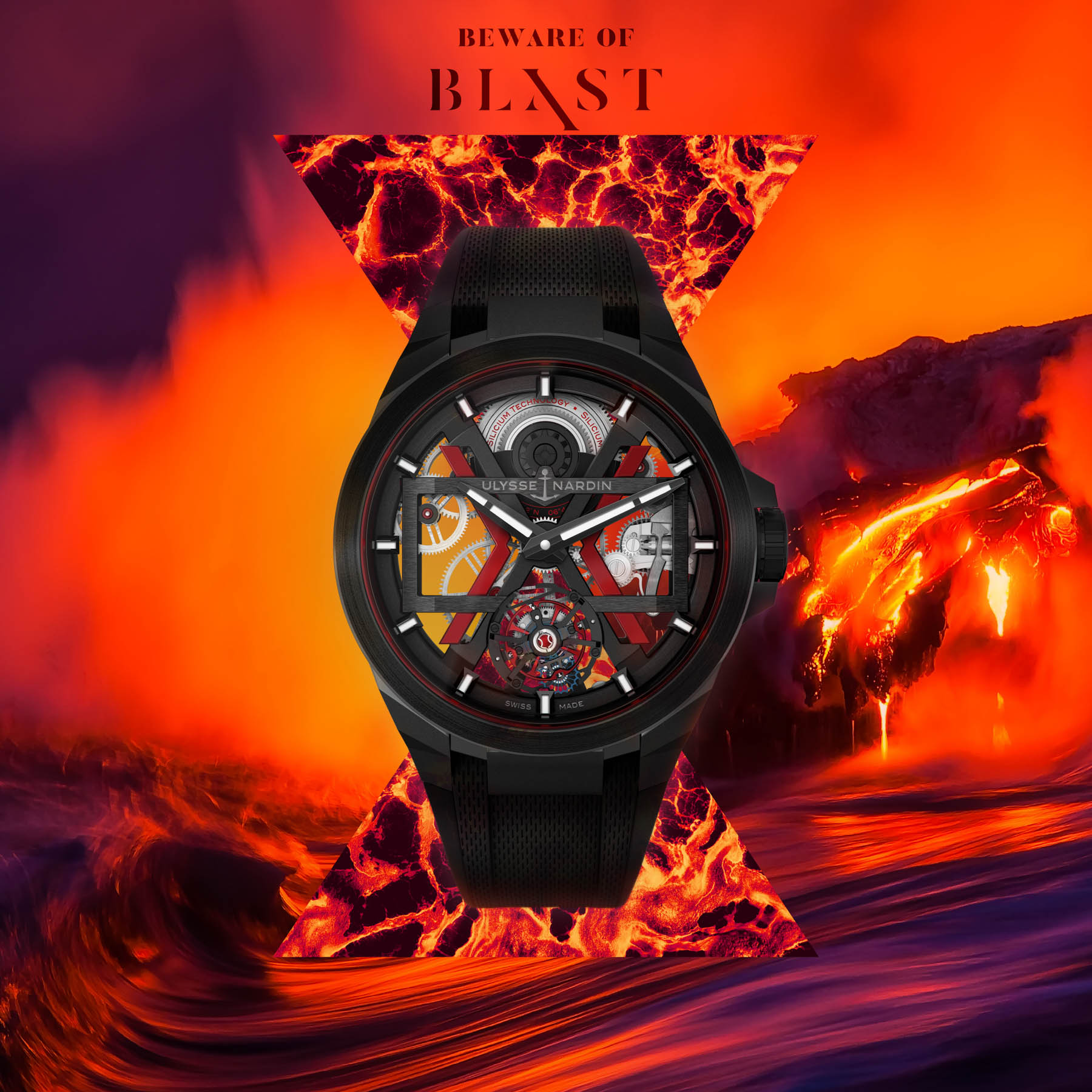 Just look at some of the official imagery the brand is using to promote the Blast. It’s loud, full of energy, vibrance, and confidence. Looks like Jeremy Clarkson designed it: a bit ridiculous and full of explosions. I guess someone at Ulysse Nardin decided to turn things back down a bit when it came to ensuring the day-to-day wearability of the Blast. But judging from these images, one gets the sensation they would have made a strap from lava if they could. Divisive? Yes. But I’d rather see us watch enthusiasts argue over these as opposed to remaining silenced by the boredom of the rest of the ads (and watches) — because most of them are so dull there is not much to argue about, like Bradley Cooper being lost in the desert or Jake Gyllenhaal having fever dreams about flying. Who cares? I don’t know about you, but I’d rather wear a loud watch than a prop from an ad. None of this is to say that the Blast is perfect. 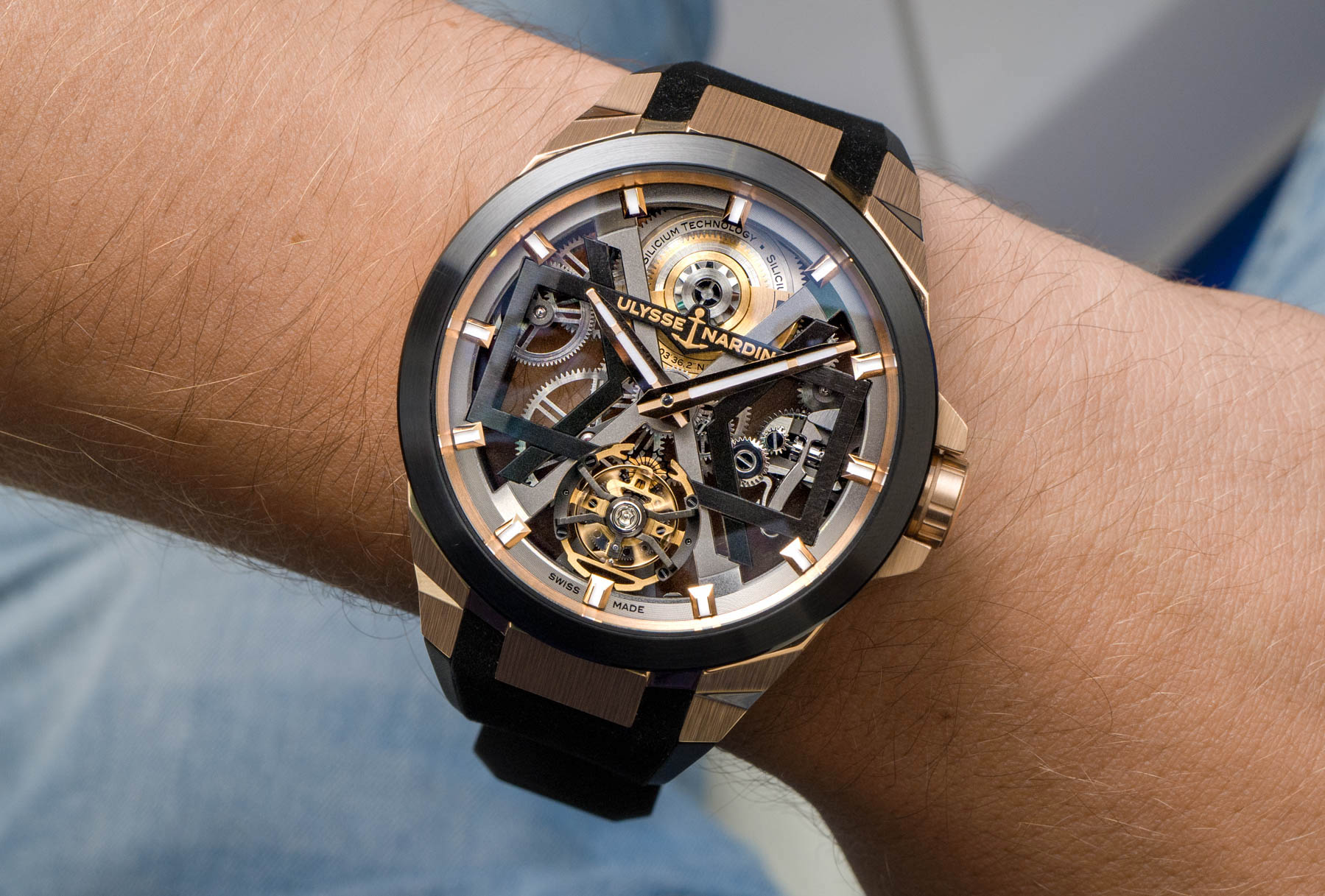 When viewed in any of its four iterations (in white or black ceramic, titanium, or rose gold), the Blast looks a bit too wide and a bit too long on any but larger wrists. It may be 45mm-wide, but the so-called tessellated lugs add a fair bit to the height across the wrist. Thickness remains impressively manageable at 13mm, altogether. Still, just like its mind-blowing awesome Tourbillon Free Wheel sibling, I feel like the Blast is carrying a bit too much extra girth in the flange ring (the ring that holds the hour indices), the thickness of the bezel, and the length of the lugs. A solid counter-argument could be the fact that everything on this watch is like an artistic expression (which it is), and those need a larger canvas to attain full effect. Maybe it’s just me wishing I could rock these larger-than-life watches better.

Here’s the real shocker. Despite its loud looks, the Blast is actually more than meets the eye. It’s a ridiculously over-engineered watch with what appears to be an astoundingly low number of generic components — and while you may be led to believe that’s standard operation for $44,000 watches, the reality is everything but that. The reality is more like slapping annual calendar or chronograph modules on top of base movements — à la Patek Philippe seen here, or Audemars Piguet seen here, and so on. The Blast gets a custom movement and dial, unique case, and a flying tourbillon for the price of those two base movement watches I just linked to. Setting looks aside, the deficiency in the volume of details and specs when comparing the Blast with those two is plainly shocking. Just look at that movement (and dial) below and see how many generic parts you’ll count: Even most of the wheels that really could be regular ones have special designs, not to mention literally every other part in the UN-172 caliber. 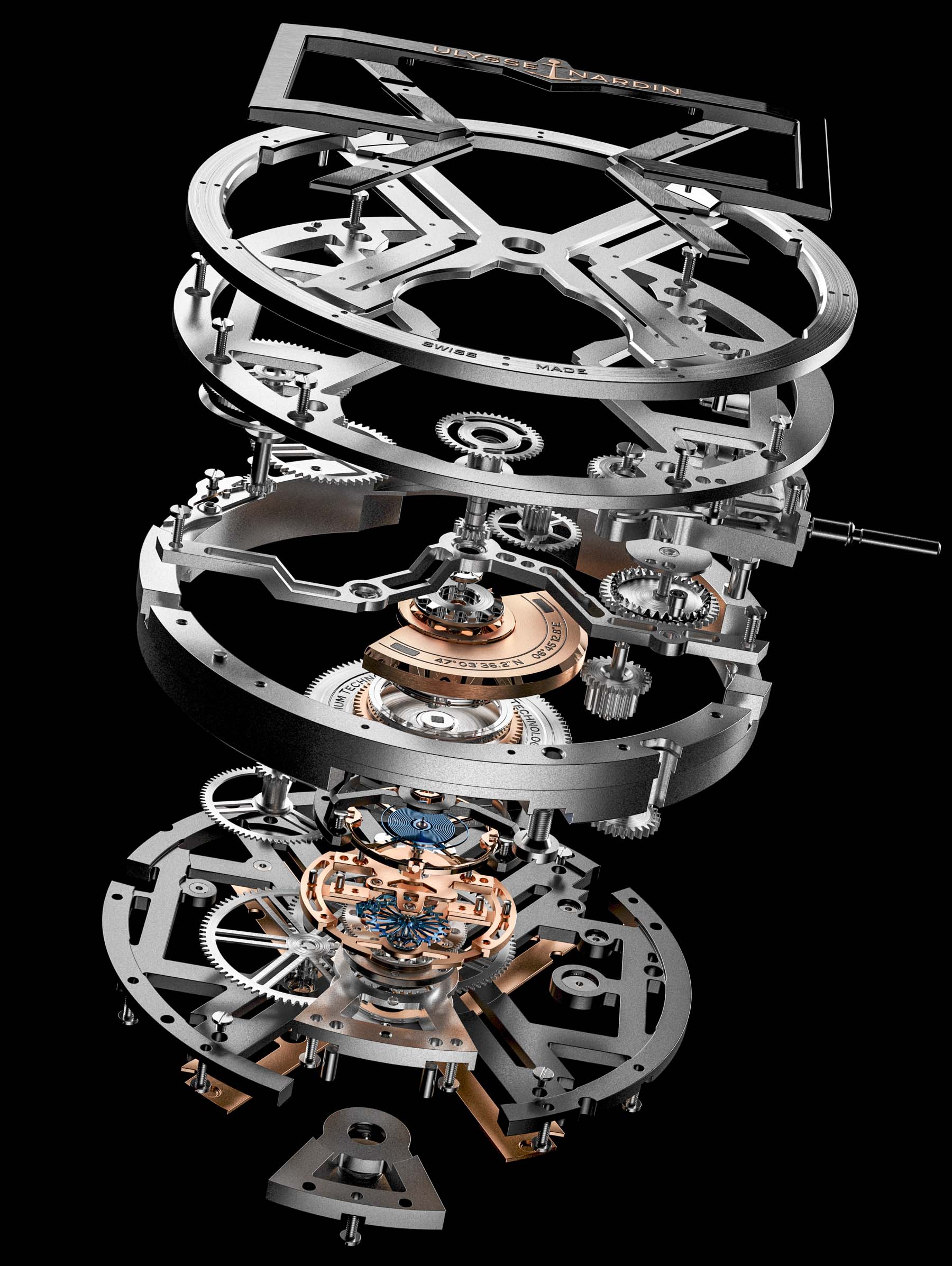 If it wasn’t obvious at first sight, Ulysse Nardin clarifies that they conceived the Blast as an integrated watch in the sense that the case, dial, and movement all had to work together both visually and structurally, as opposed to designing a fancy case around a regular movement and dial. As such, the front and the back of the movement feature a prominent double “X” shape that serves as the open-worked dial and as the rear plate of the movement. The way the dial, movement, and case come together is such that, when viewed in person, the entire watch does indeed make the impression of an integrated design. Every line, structure, and component somehow seems to be tied up and in connection with each other. 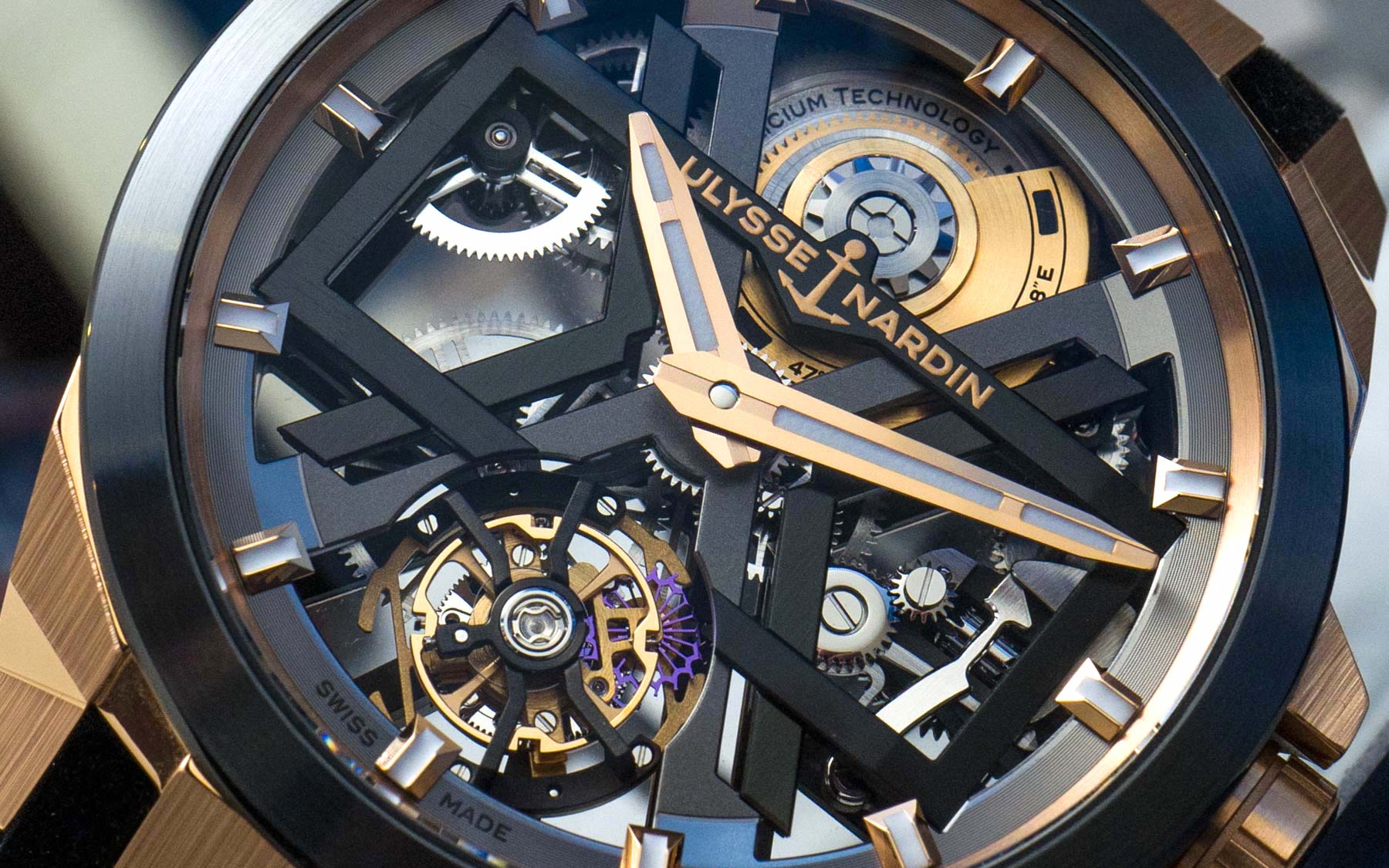 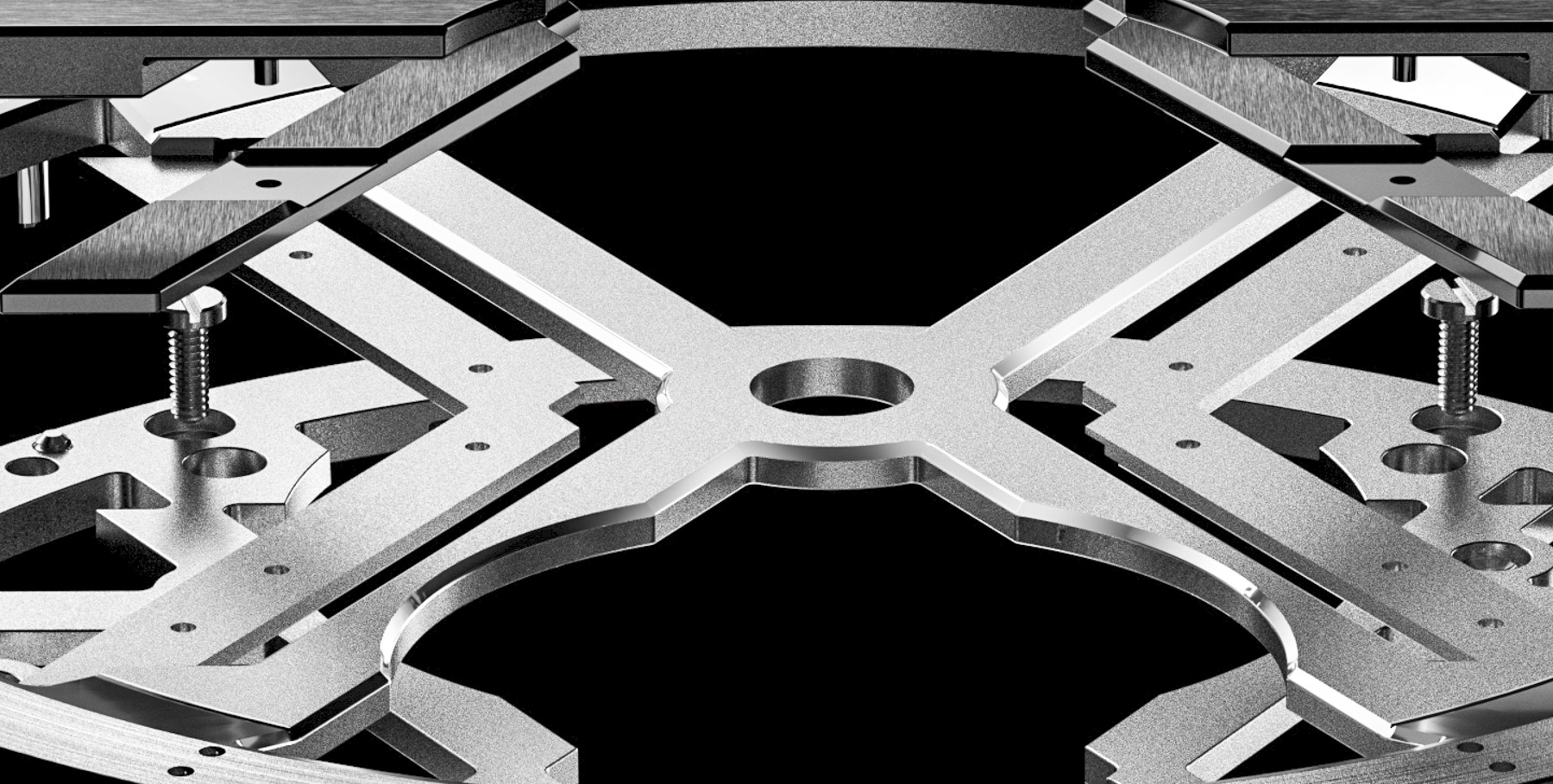 The dial ends up looking like a cage designed to keep the movement and its shiny, silver-colored wheels and gears from flying into your face. It well and truly is a high-energy dial if there ever was one. There appears to be absolutely zero conventional parts in this movement and dial. I recognize these components as precisely the sort of stuff that makes CAD watch movement part designers, CNC operators, and component decorators lose sleep over. It takes weeks, if not months, to design and finalize such a piece, and years of focused work to create a movement that is constructed exclusively with these parts and million-dollar multi-axis machines to craft them. At least that’s what I have heard from every watch manufacture and OEM movement maker. Designing, prototyping, manufacturing, assembling, and finishing entirely in-house (and having decades of experience in designing outlandish watches), Ulysse Nardin is proud of the fact that it designed the Blast in a lightning-fast 18 months. 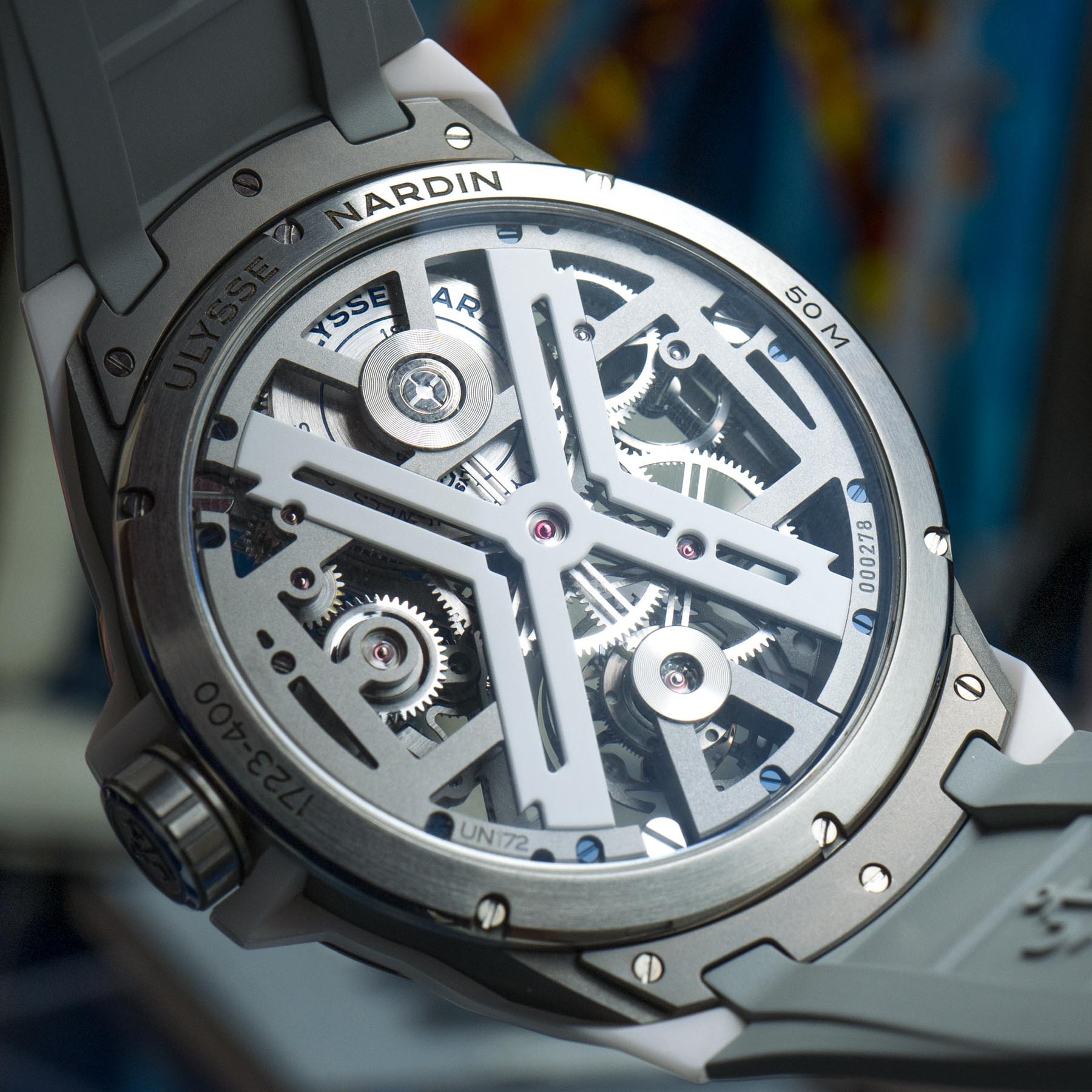 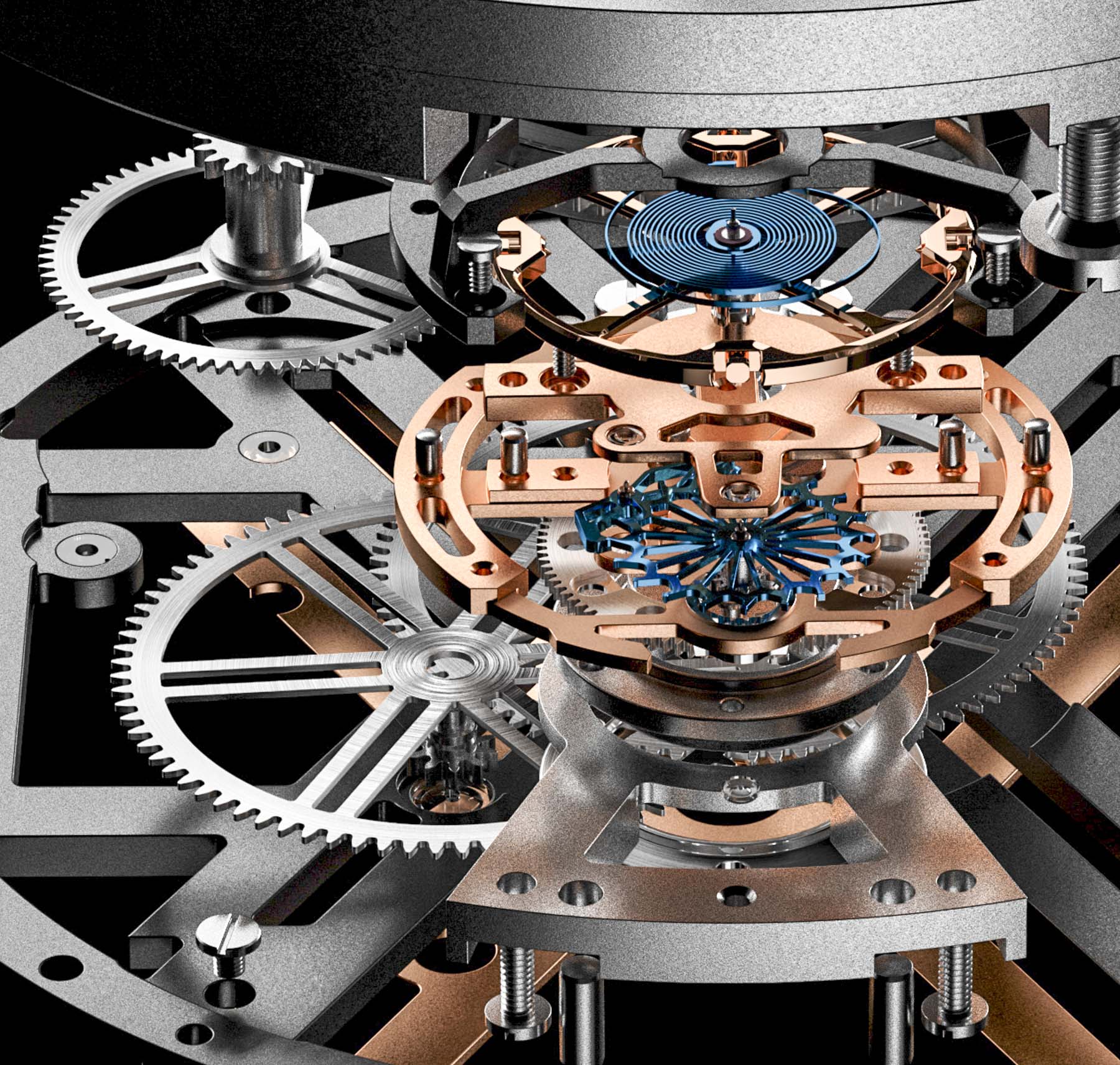 The UN-172 caliber that powers the Ulysse Nardin Blast provides 72 hours of power reserve, replenished by a platinum micro-rotor that is visible only from the dial side as it is set on top of the mainspring barrel at 12 o’clock. The visual counterweight is the flying tourbillon at 6 o’clock on the dial. It is as bonkers and off-the-wall as the rest of the Blast. It uses Ulysse Nardin’s silicon escapement wheel, anchor, and balance spring, eliminating the fear of magnetism or the need for lubrication. The movement beats away at a lazy 2.5 Hertz (18,000vph), allowing the wearer to appreciate the slow breathing of the escapement. 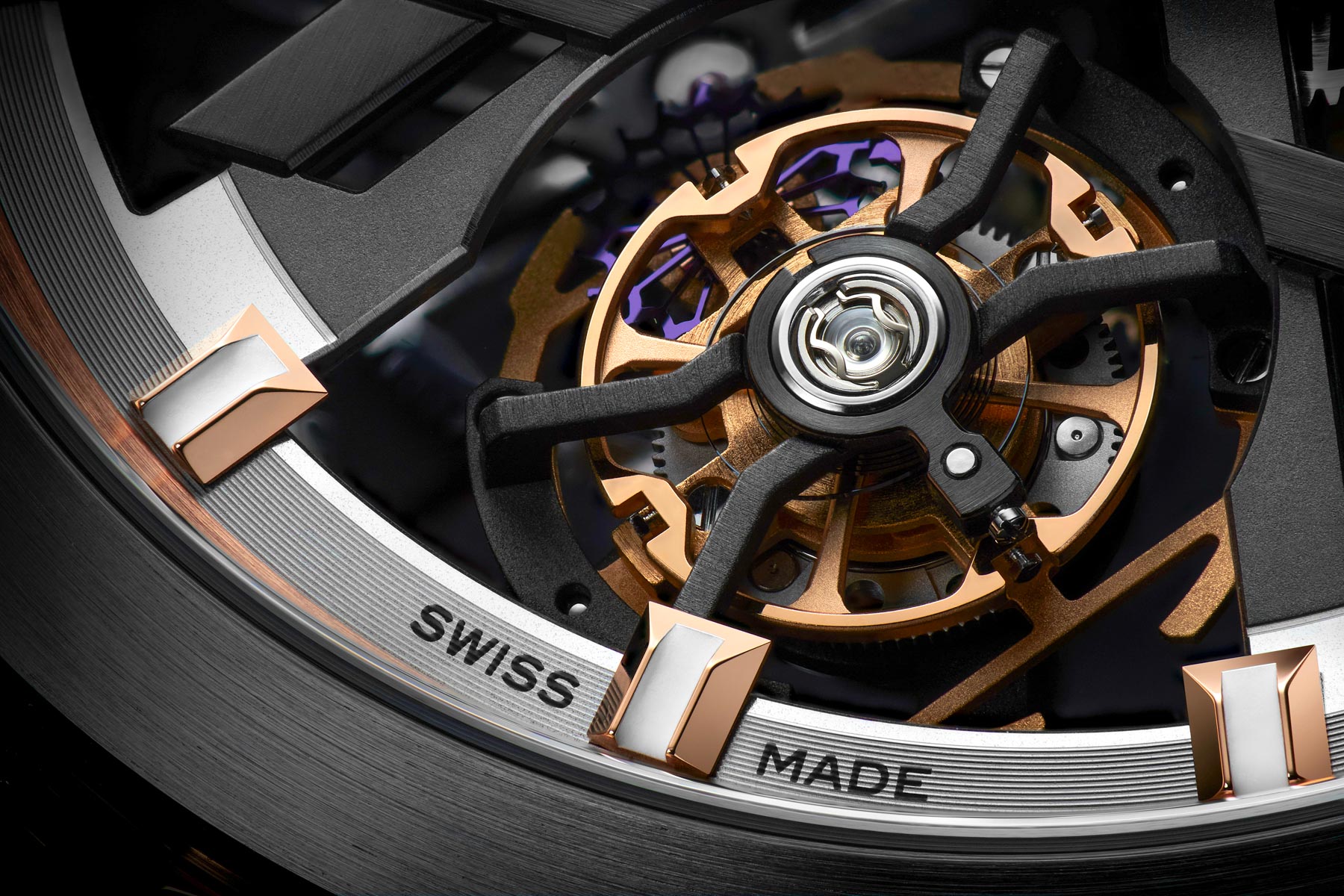 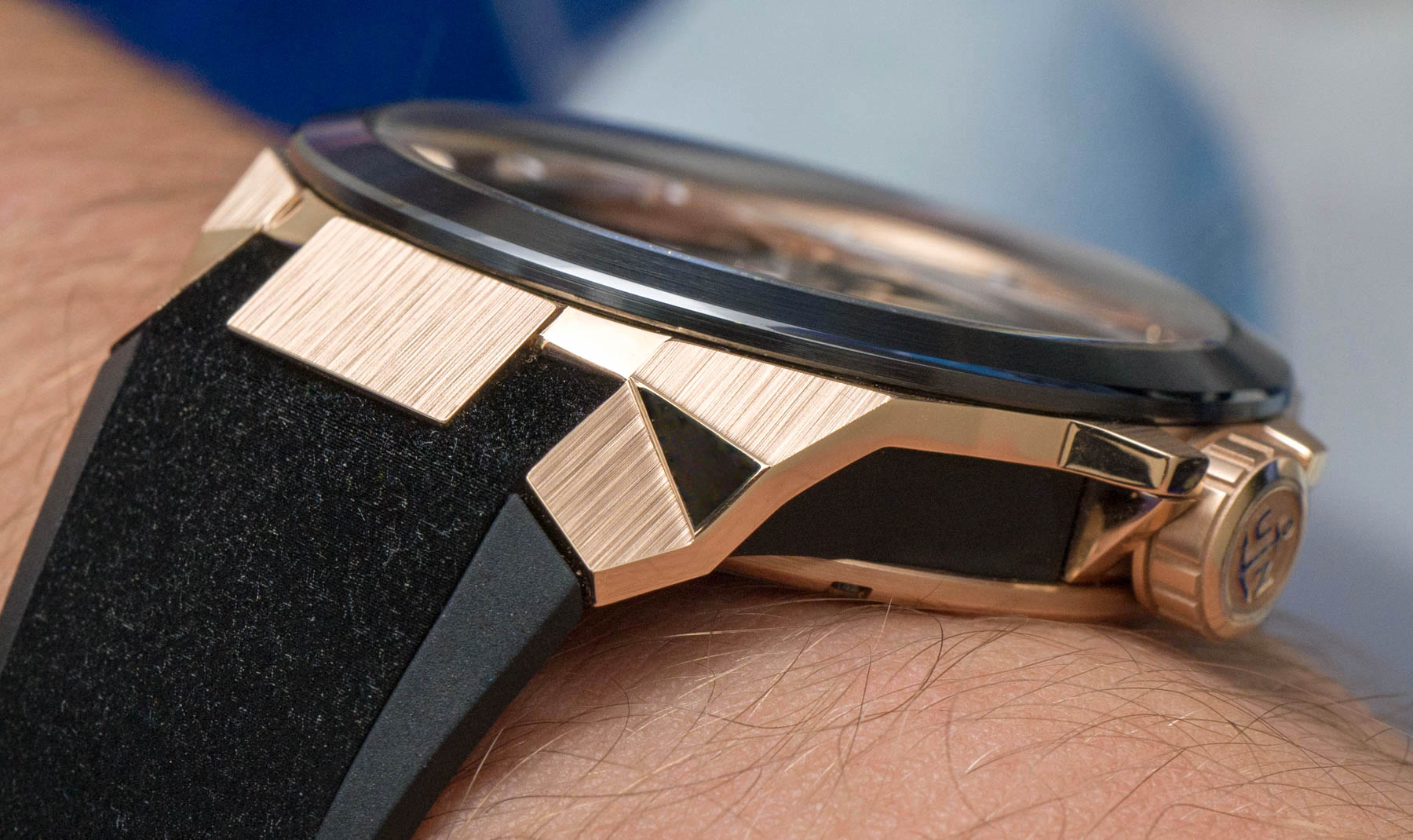 The list of apparent impossibilities goes on with the case. Anyone with a mind for basic geometrics (or advanced case polishing) will realize how those triangular, almost vertical facets of the lugs cannot be polished. The angularity of these facets is such that there is no apparent way they could be polished and brushed in any sequence of surface treatments where one or the other wouldn’t get destroyed. The way alternating surfaces are generally attained on watch cases is by first polishing the entire thing and then brushing the desired segments. When I asked Mr. Sabatier about this, he clarified that the case of the Ulysse Nardin Blast models in titanium and rose gold are indeed finished using a novel method. 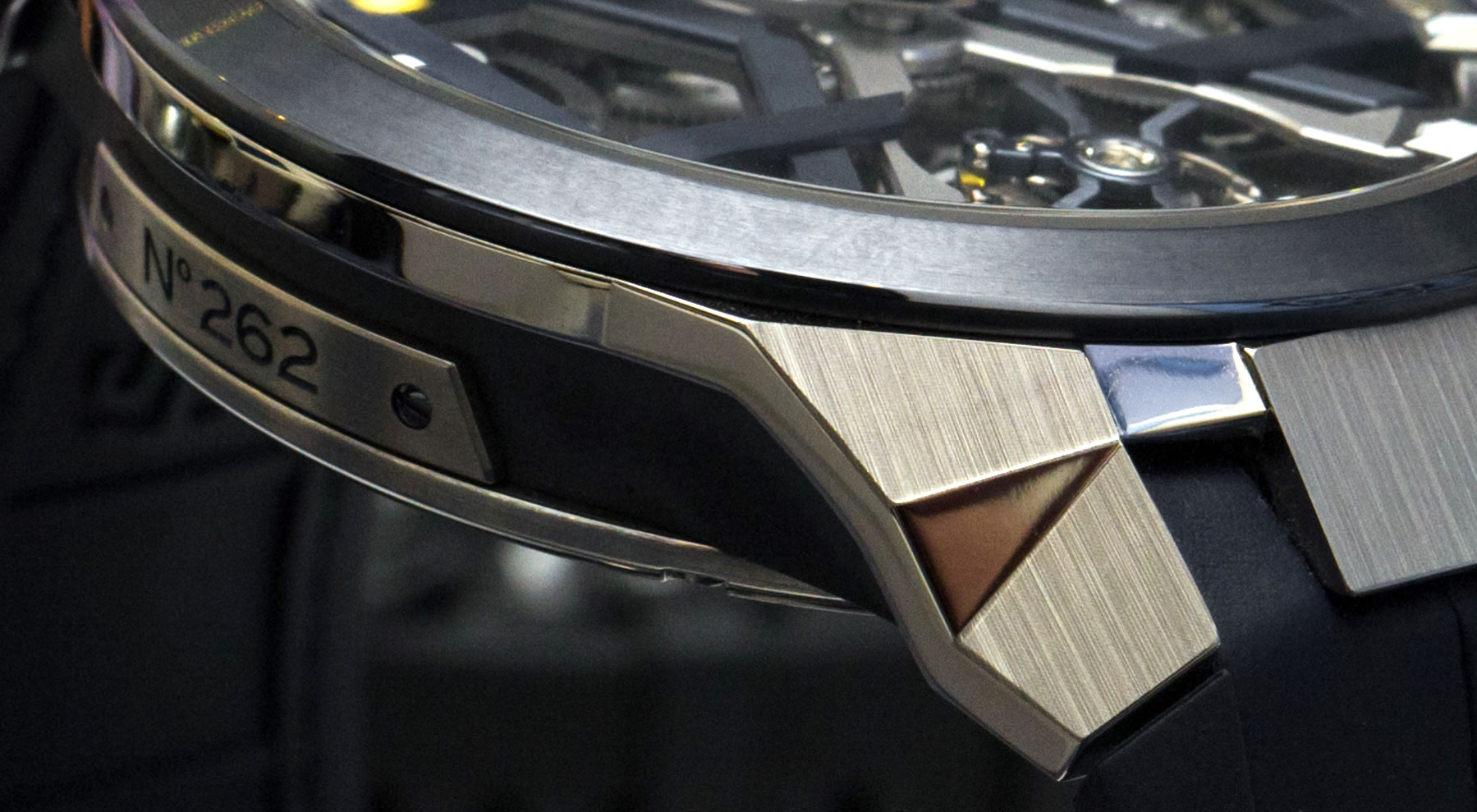 These parts are brushed using laser etching that allows them to start and end the brushed surfaces exactly where they need to. The trick though comes from the fact that when using a laser to etch a surface, you’ll end up with a striped look, like a shirt for example, with perfectly even lines at even distance from one another. To ensure these odd-angled surfaces mimic the look of “genuine” brushing, an algorithm had to be developed that would randomize the lasered pattern in a way that would faithfully replicate the uneven, yet elegant surface achieved using traditional brushing that appears on other Ulysse Nardin (and other) luxury watches. So there, even the case has its own incredibly nerdy detail. 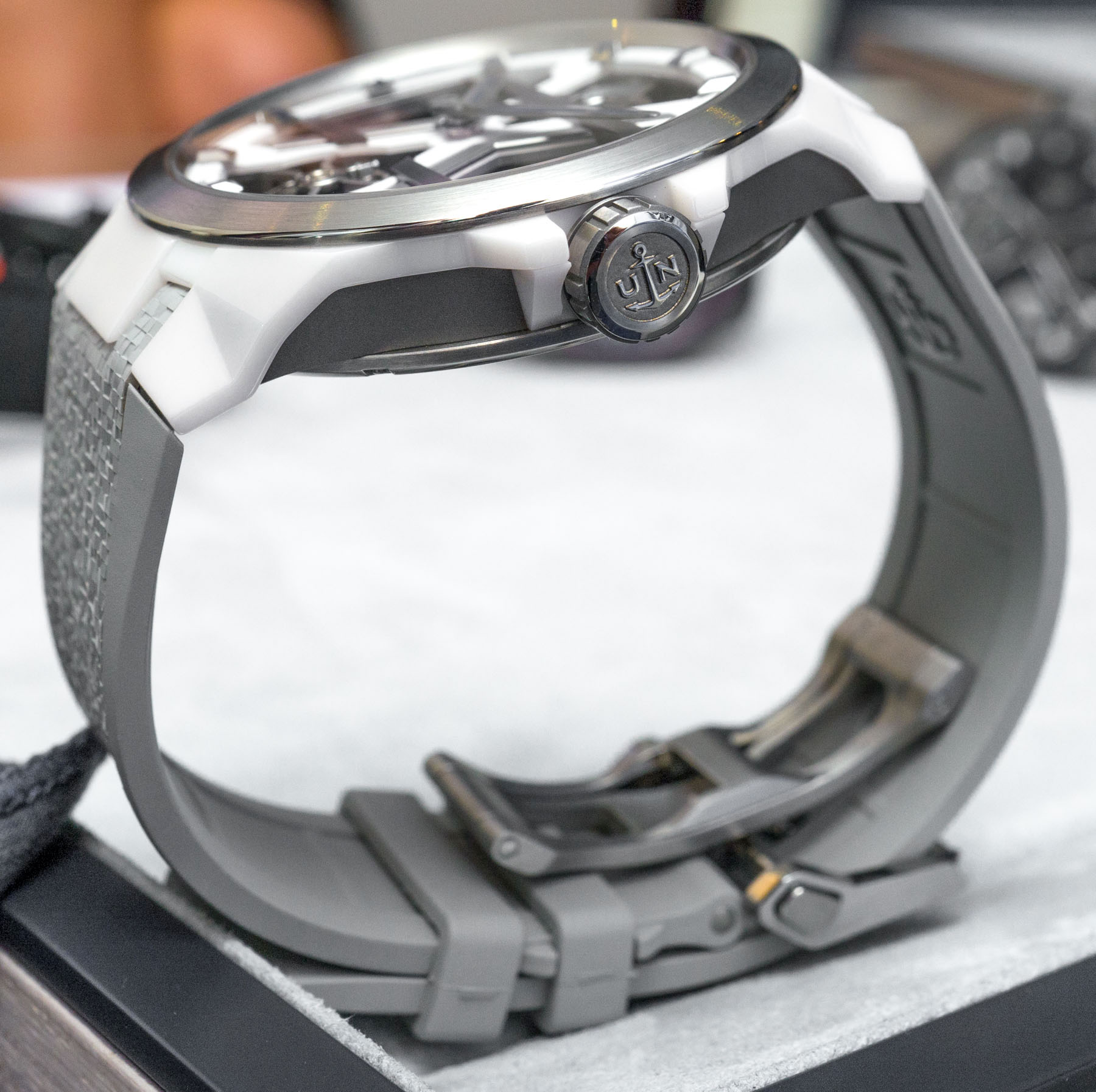 The Blast takes on a different vibe in white or black ceramic. Considered a high-tech material by some and plastic by others, both of these are good looks for the Blast, even though I’m not sure the nerd in me could say no to the algorithmically laser-etched surfaces. For years now, I’ve felt like the latest high-end Ulysse Nardin watches were made to appeal to yuppies in Silicon Valley — and that sentiment is only reinforced by the Blast. A common thing among all four iterations is that the Blast looks and “feels” much more like a bracelet, really, than a watch, precisely for the aforementioned integrated nature of it. 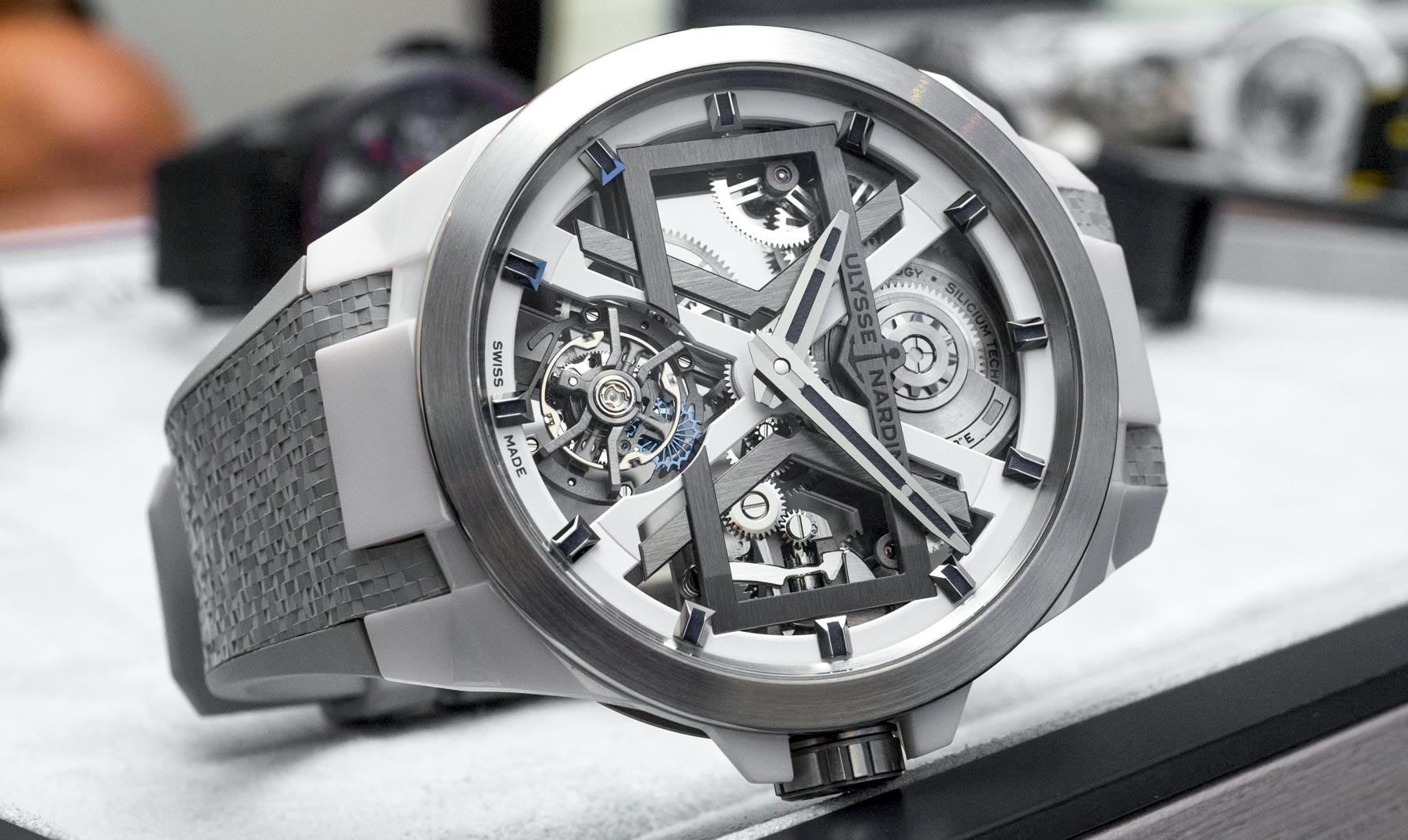 In closing, let’s put all the looks and lava streams and all that aside for a second. The Ulysse Nardin Blast is a whopping third of the price of flying tourbillons from Glashütte Original, and Audemars Piguet or Parmigiani Fleurier. One-third. Click on any of those links and compare the complexity of case, movement, and dial construction with that of the Blast, not to mention all the silicium escapement and case manufacturing technology. The only real competition for the Blast comes from within the house with the Executive Skeleton that’s available from $17,500 in black, and $21,000 in gold-carbon for a very comparable vibe.

Whether the atomic styling tickles your fancy or not, with Ulysse Nardin Blast watch prices starting at $44,000, and topping out at $54,000 for the solid gold model, it remains an outstanding value in the field of flying tourbillon watches from historic manufactures. You can browse the entire collection at the brand’s website.