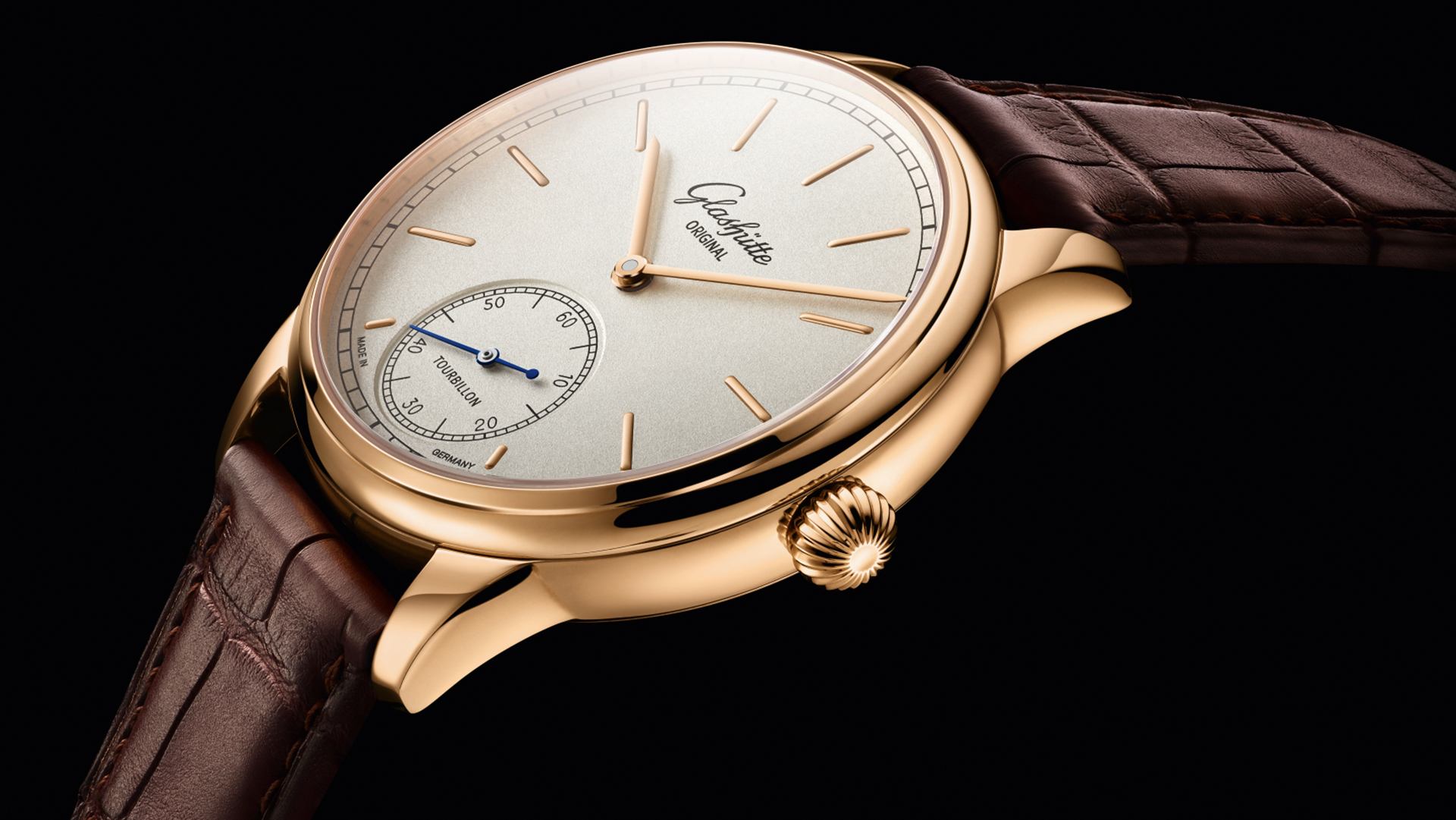 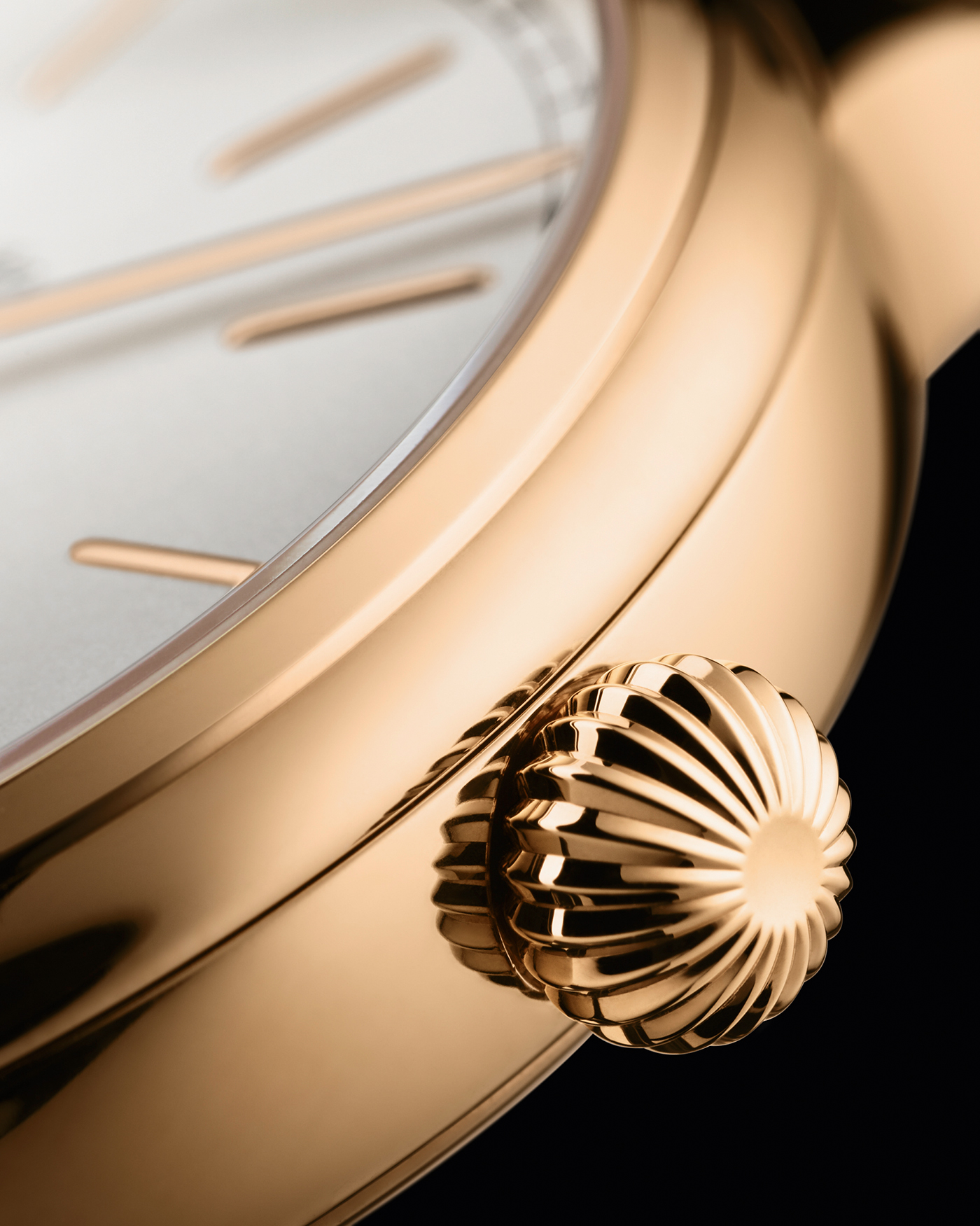 The 40mm 18k rose-gold case of the Glashütte Original Alfred Helwig Tourbillon 1920 takes cues from the brand’s Senator series, with a simple dressy overall design. The only real visual flourish here is the ornate onion crown at 3 o’clock, along with the subtle stepped effect of the polished bezel. In initial images, the overall effect looks to be refined, elemental, and suitably classical for the watch’s 1920s inspiration. 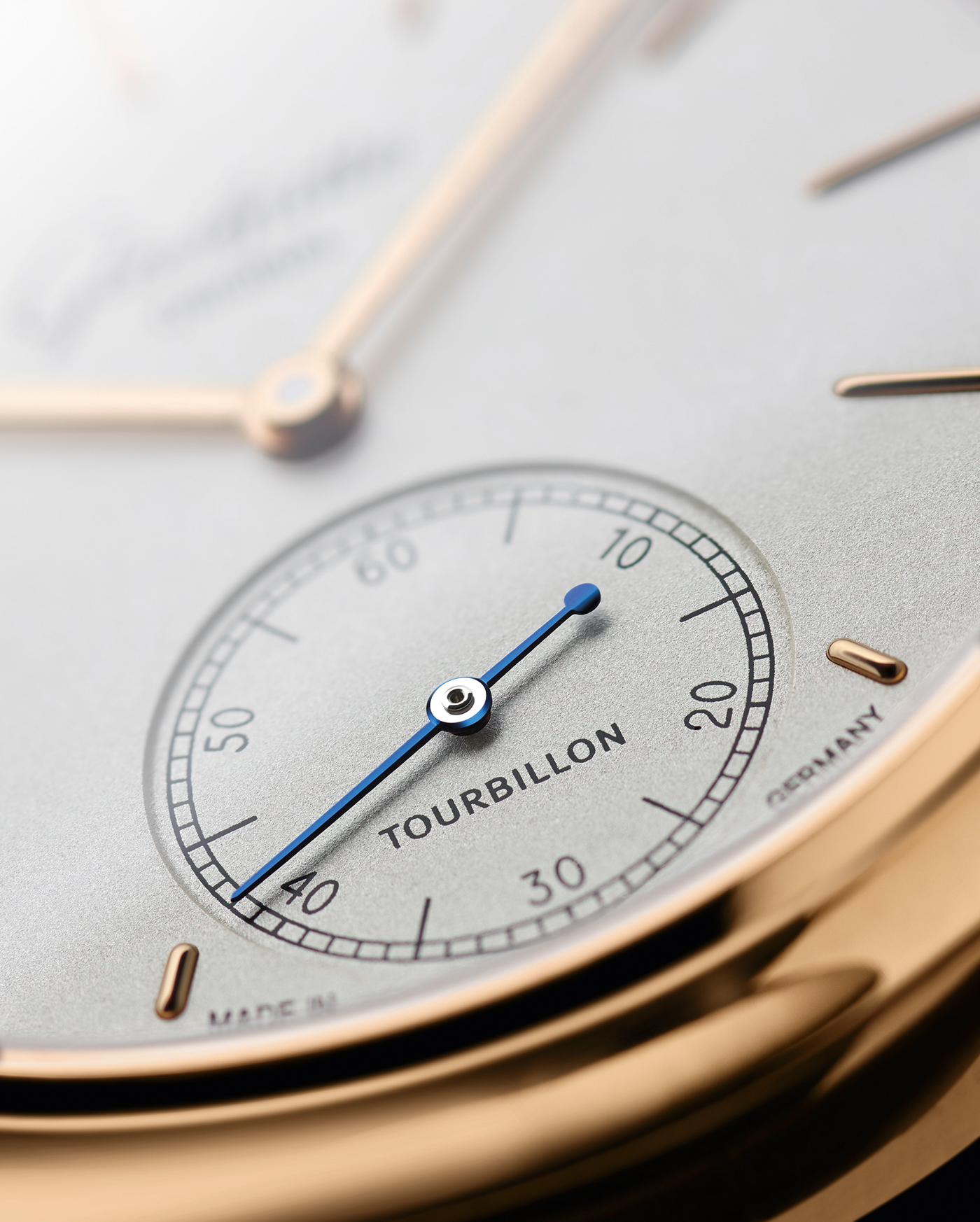 Like the case, the dial of the Glashütte Original Alfred Helwig Tourbillon 1920 is a period-correct showcase of Germanic simplicity, which runs counter to most flying tourbillon designs of today. The hands and applied indices are minimalist rose-gold sticks, while the outer border of the dial is punctuated by a vintage style railroad minutes track. To a certain degree, this simplicity is deceptive, as the dial surface itself is frosted silver-plated gold. The 6 o’clock small seconds subdial is of particular interest, however. While the design is very much in keeping with the classic German luxury aesthetic, its very existence may be a point of contention. Hiding a flying tourbillon beneath a solid subdial is almost unheard of in this day and age, and it’s easy to imagine some potential buyers turned off by this stealthier approach. That said, this is a faithfully accurate recreation of Alfred Helwig’s original 1920 design, and the decision not to skeletonize the dial radiates quiet confidence. This is for the wearer who doesn’t need to announce to everyone that they are wearing a tourbillon, someone who has nothing to prove. 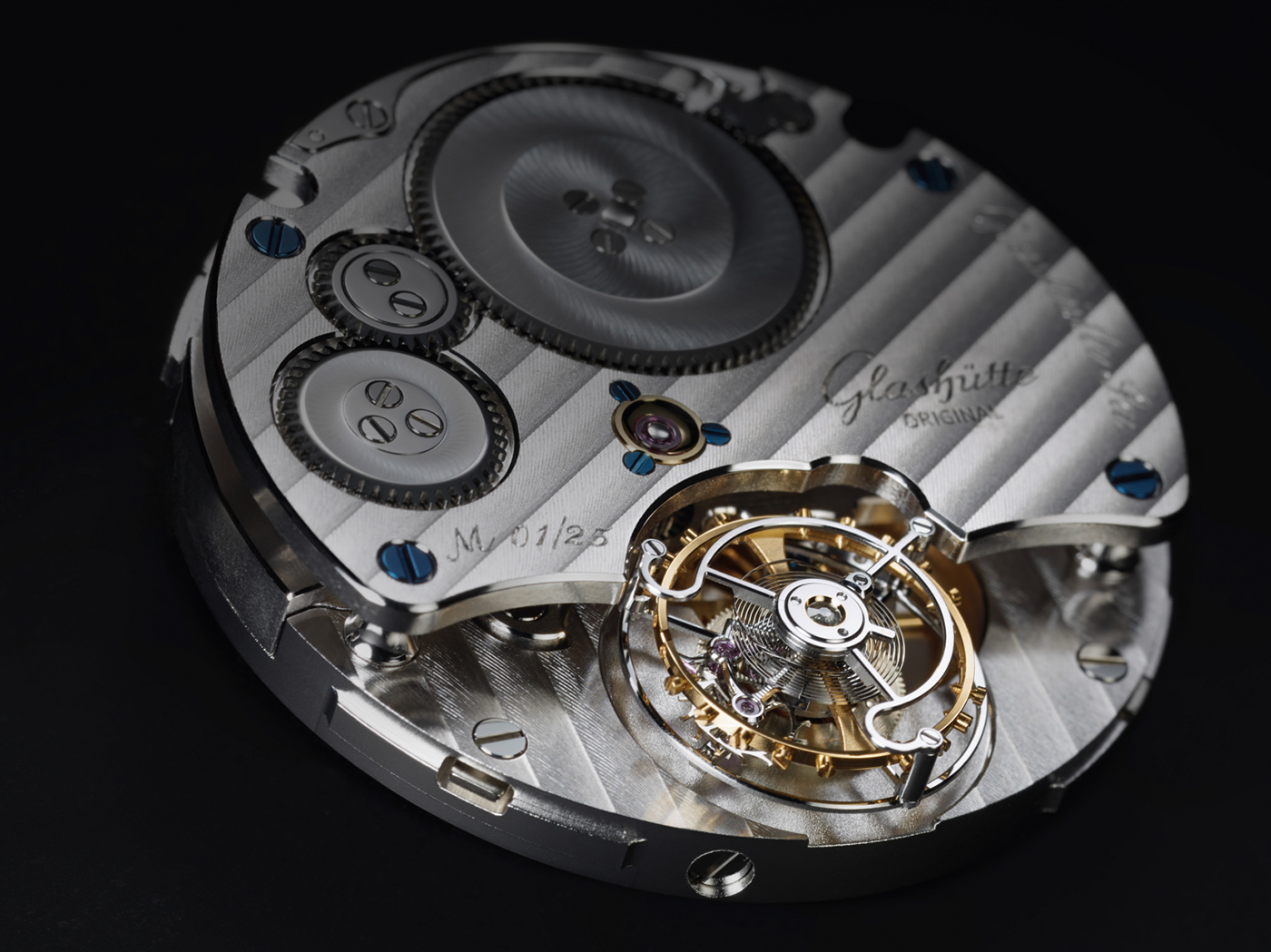 While the case and dial of the Glashütte Original Alfred Helwig Tourbillon 1920 are solidly restrained and minimal, the in-house Calibre 54-01 hand-wound flying tourbillon movement visible through the display caseback is a touch more ornate. The decoration here is still in the classic German style, with a nearly full bridge topped by blued screws, polished bevels, and Glashütte stripes. At 6 o’clock, however, the Calibre 54-01’s centerpiece is allowed to show itself. The cantilevered flying tourbillon is still an impressive feat of engineering 100 years later, and the decision to make it visible only from the caseback does not make that solitary view any less dramatic. Performance for the Calibre 54-01 is solidly impressive, with a hefty 100-hour power reserve at a 21,600 bph beat rate. 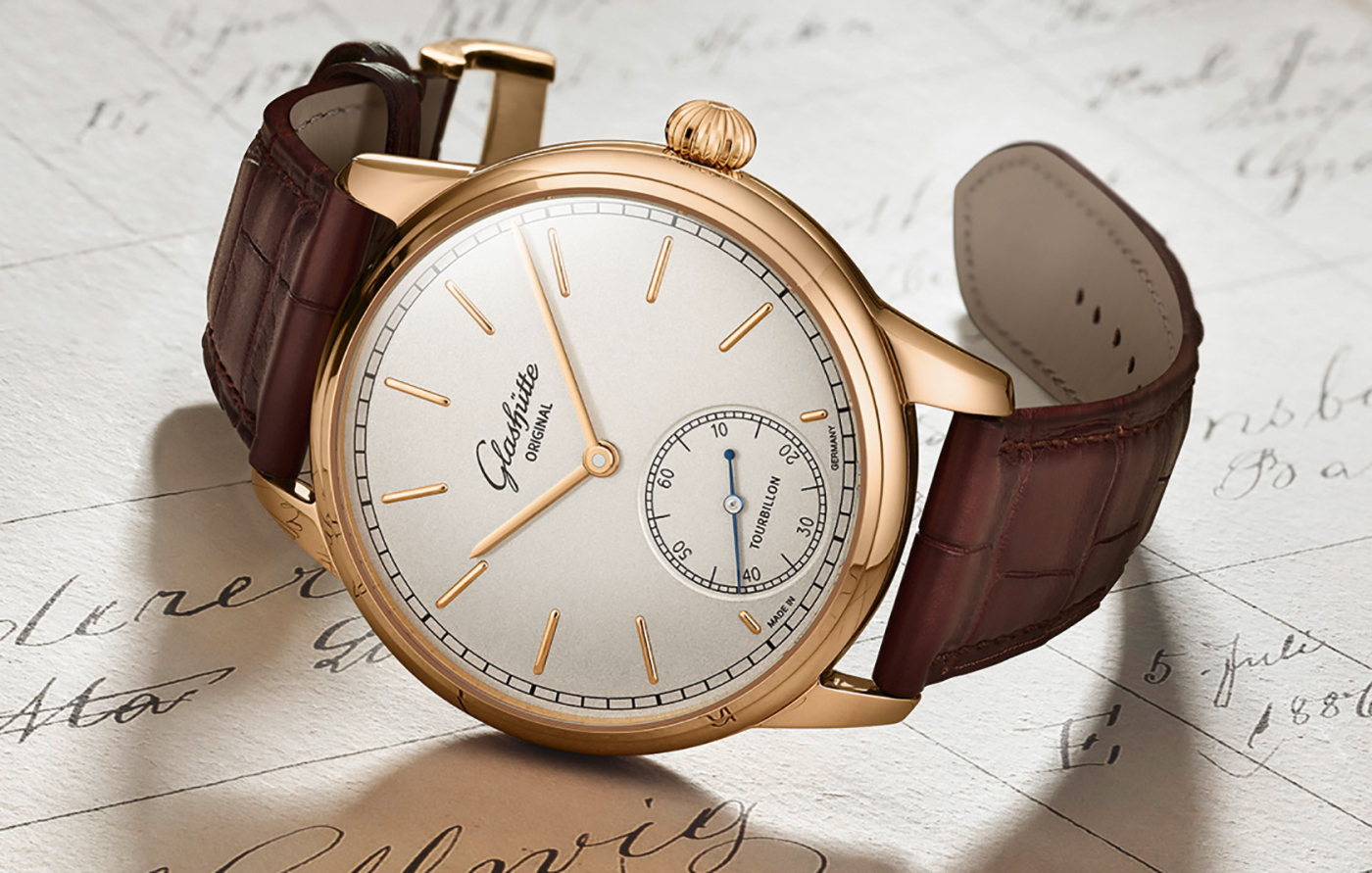 To finish out the classical, conservative look of the Alfred Helwig Tourbillon 1920, Glashütte Original pairs the watch with a Louisiana alligator leather strap in a warm mahogany brown. To keep the simplistic style, the brand opts for a rose-gold pin buckle rather than the more ornate deployant clasp, a further connection to this design’s 1920s roots. 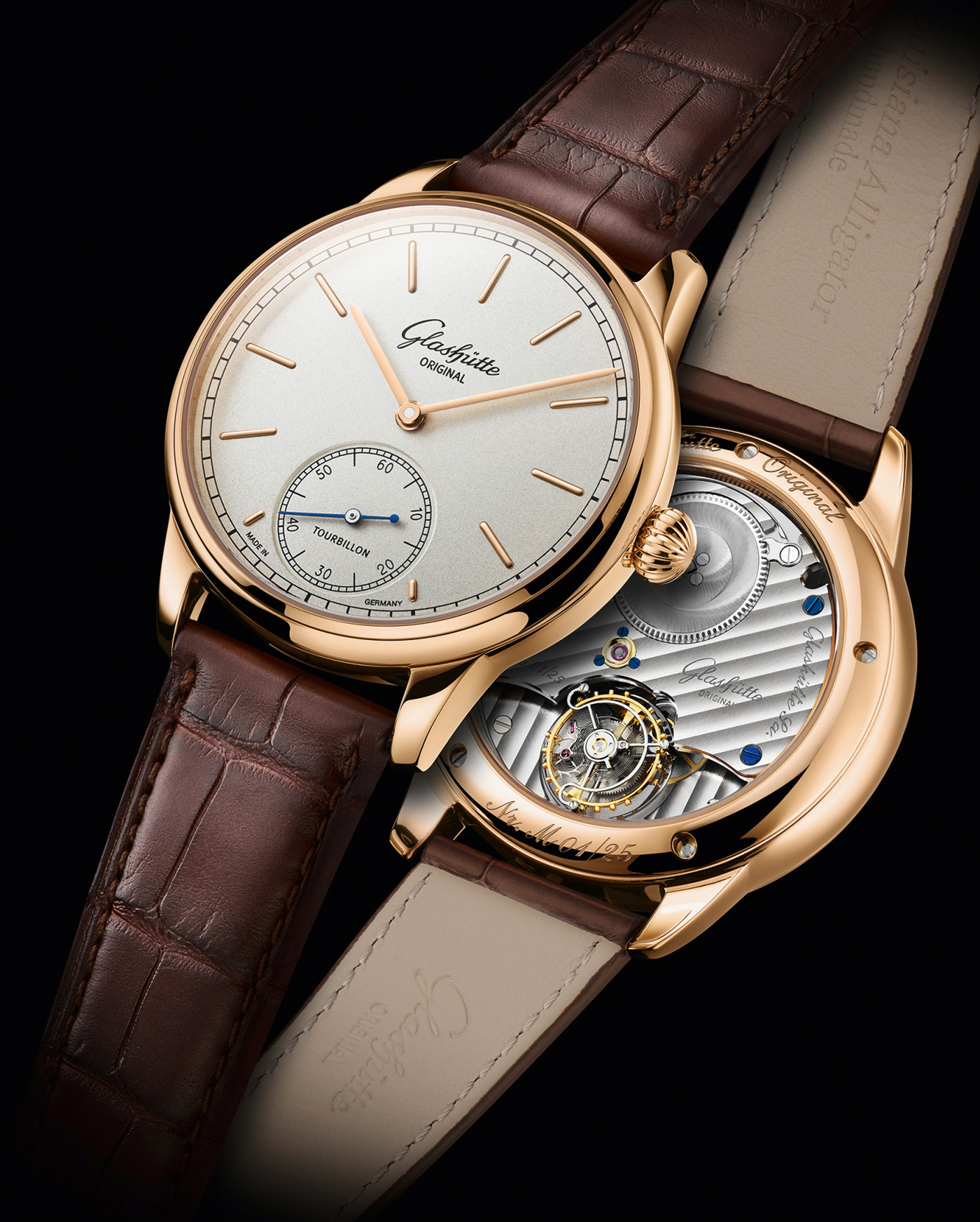 With the Alfred Helwig Tourbillon 1920, Glashütte Original has thrown out the design playbook for nearly every modern flying tourbillon watch in favor of something far more restrained, classical, and subtle. Only 25 examples of the limited-edition Glashütte Original Alfred Helwig Tourbillon 1920 will be made, available soon through authorized dealers at an MSRP of $121,800. For more details, please visit the brand’s website.