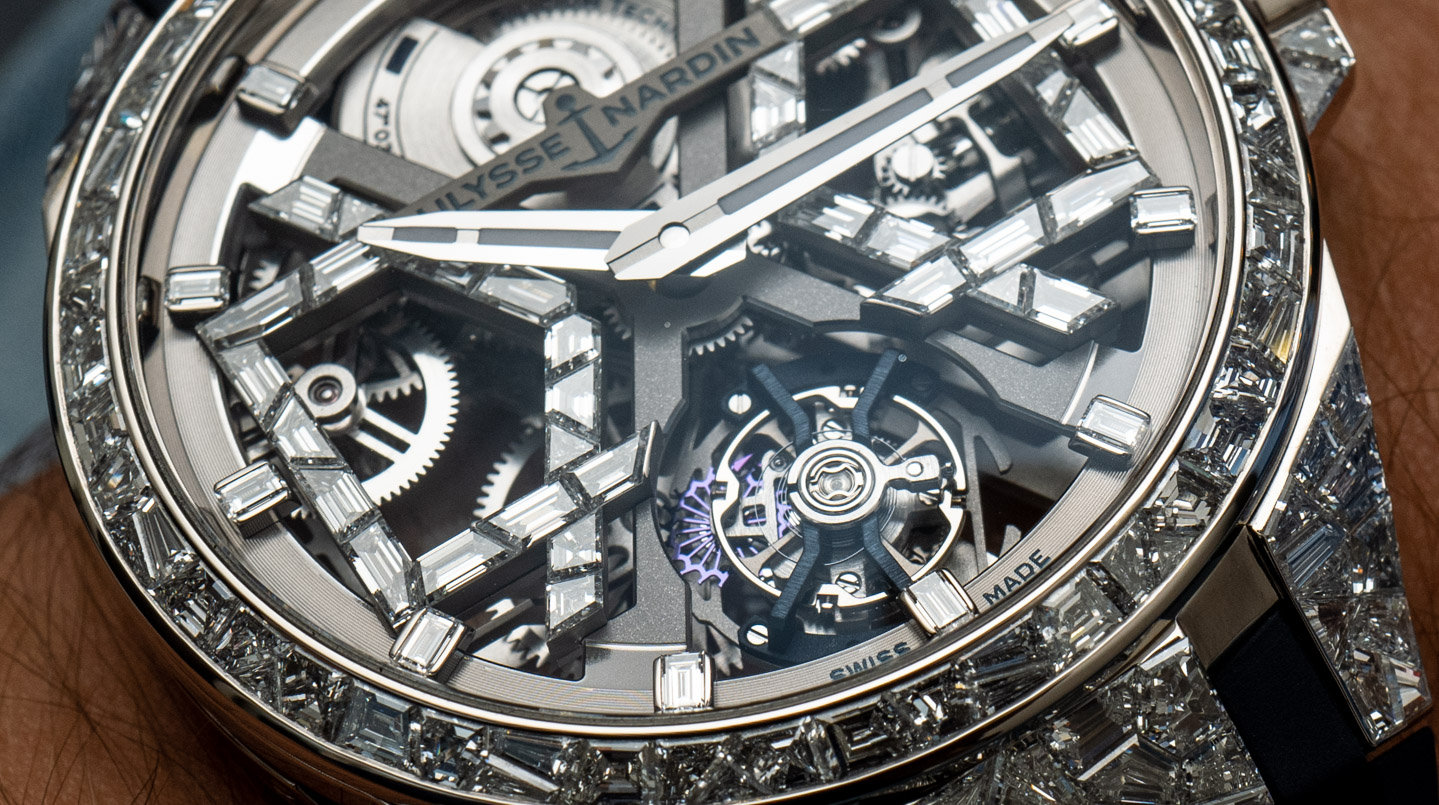 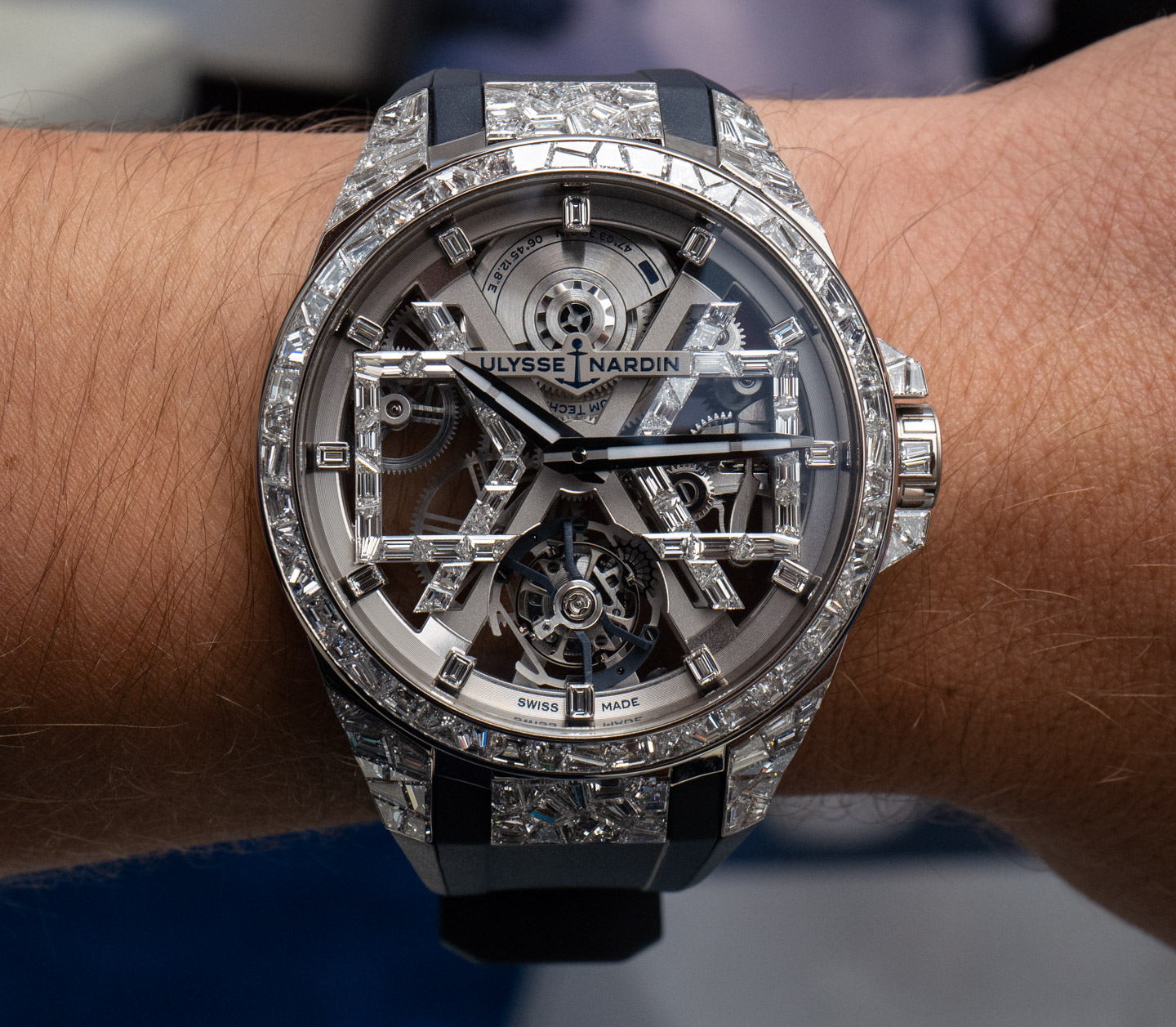 Le Locle, Switzerland-based Ulysse Nardin is a brand that wants to be better admired for its technical know-how — a message made very clear in the new for 2020 Ulysse Nardin Blast flying tourbillon collection of wearable daily luxury watches. The brand has a point. In addition to having a solid history of producing highly accurate marine chronometers, the revival of the brand started in the 1980s under the vivacious leadership of Rolf Schnyder. He was the one who made the modern Ulysse Nardin a laboratory for new ideas as much as it was a celebration of past art.

Even though Mr. Schnyder is no longer with us and Ulysse Nardin is no longer independently owned, the spirit of robust innovation and tendency to listen closely to the market lives on. The Blast collection was designed from the ground up with a case, dial, and movement all intended to flow harmoniously together. In this article, I will relay the details of an interview I did with Ulysse Nardin Technical Director Mr. Jean-Christophe Sabatier. Mr. Sabatier and I have had a number of conversations over the years. He comes from the automotive industry and has been a crucial component of Ulysse Nardin’s ability to develop brand-new mechanical creations over the last several years. 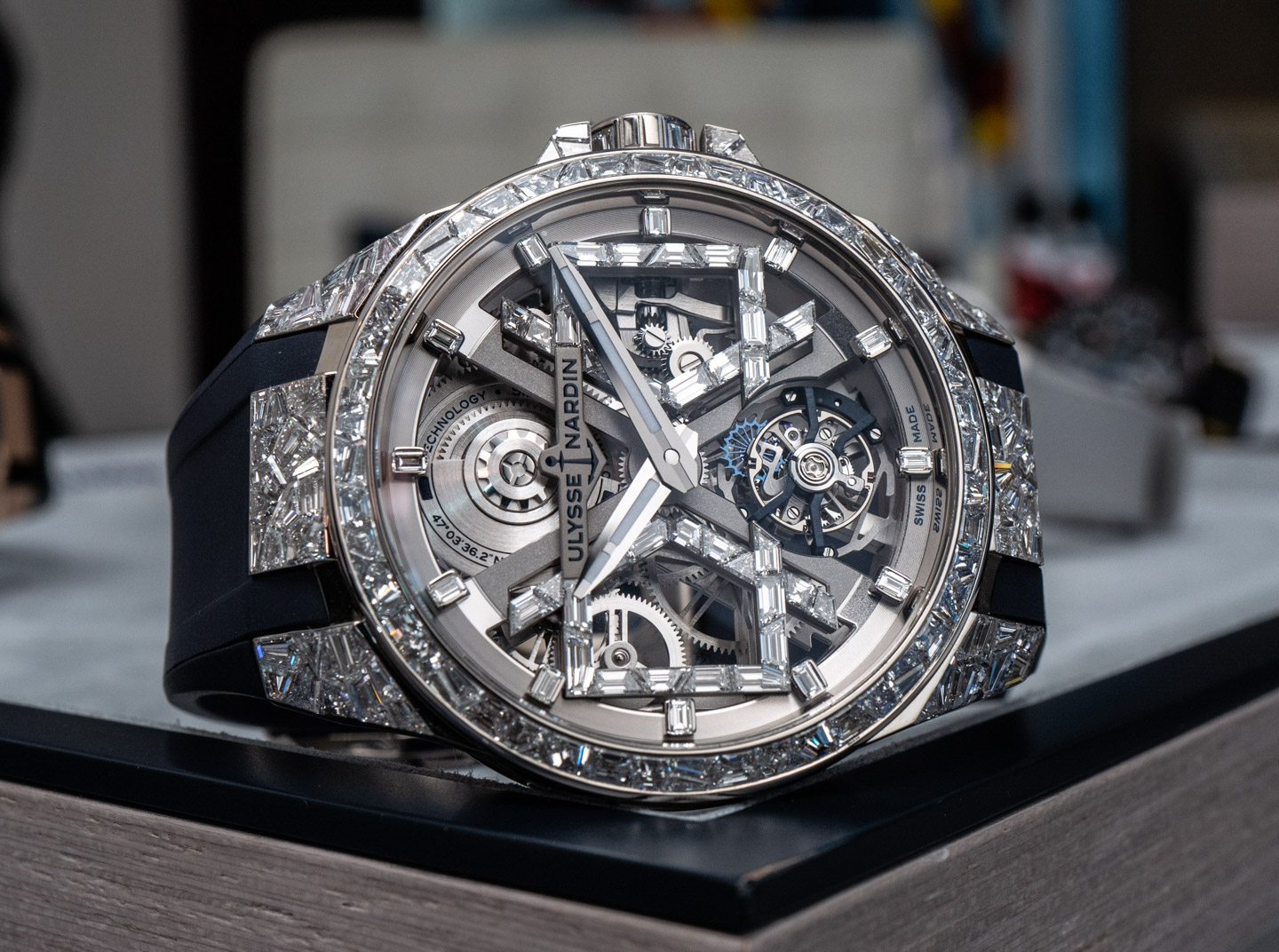 What Mr. Sabatier can be best complimented for is the considered approach to how he answers questions, as well as his lack of inhibition when it comes to borrowing smart lessons learned in other industries to the world of developing and manufacturing mechanical watches. Visually, the watch you are looking at in the images is a special “high jewelry” version of the Ulysse Nardin Blast: covered with diamonds. The watch is known as the reference 1720-400BLE-3A/01 or 1720-400BLE-3A/00 Ulysse Nardin  Sparkling Blast. The case is covered with a total of 211 diamonds (13 carats of diamond weight). The 45mm-wide case is produced from 18k white gold, and the particular diamond setting style is done in a more organic, “cracked mirror” style that is highly masculine and also unique in the marketplace. Price for the Ulysse Nardin Sparkling Blast is $410,000 USD. 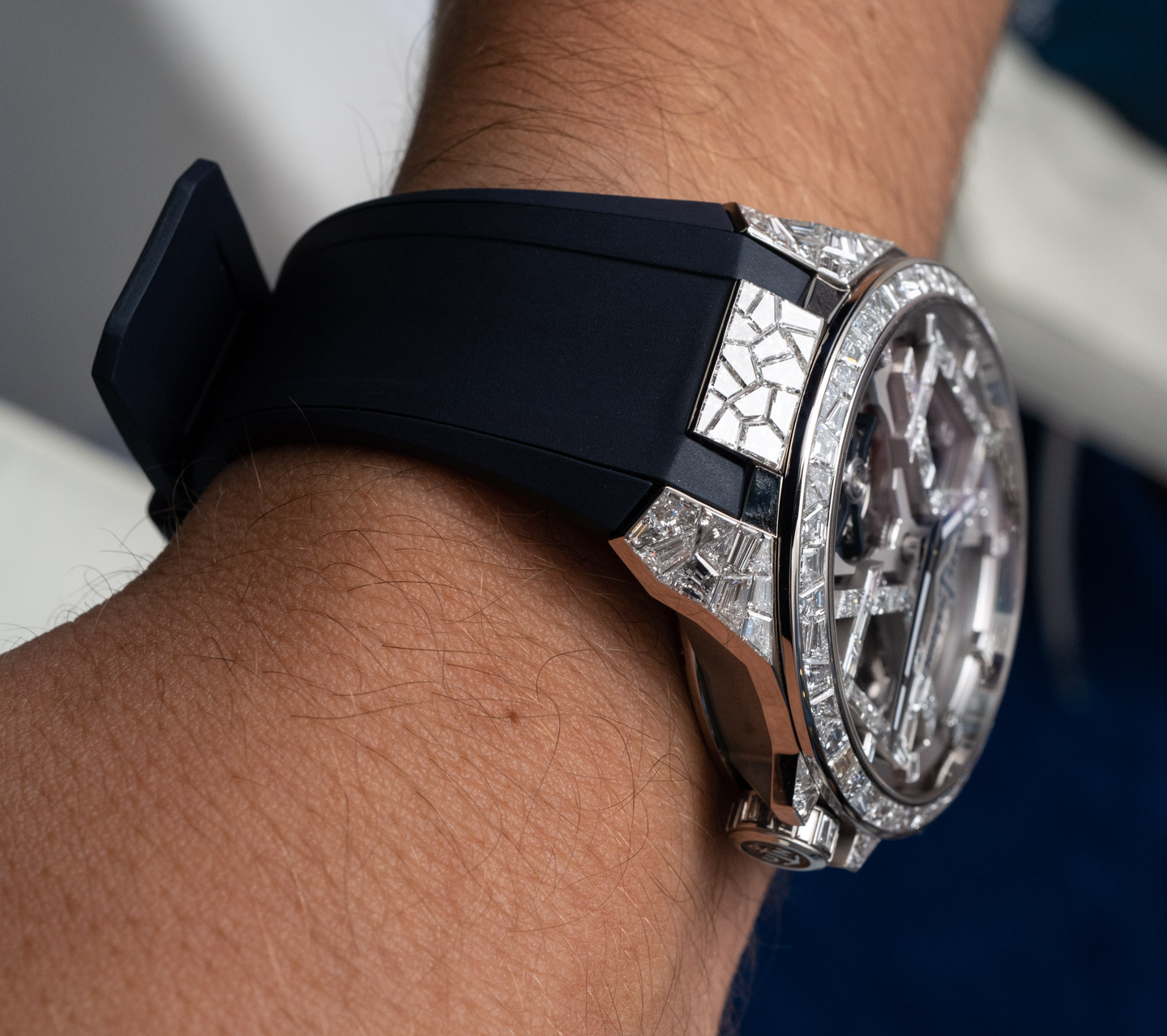 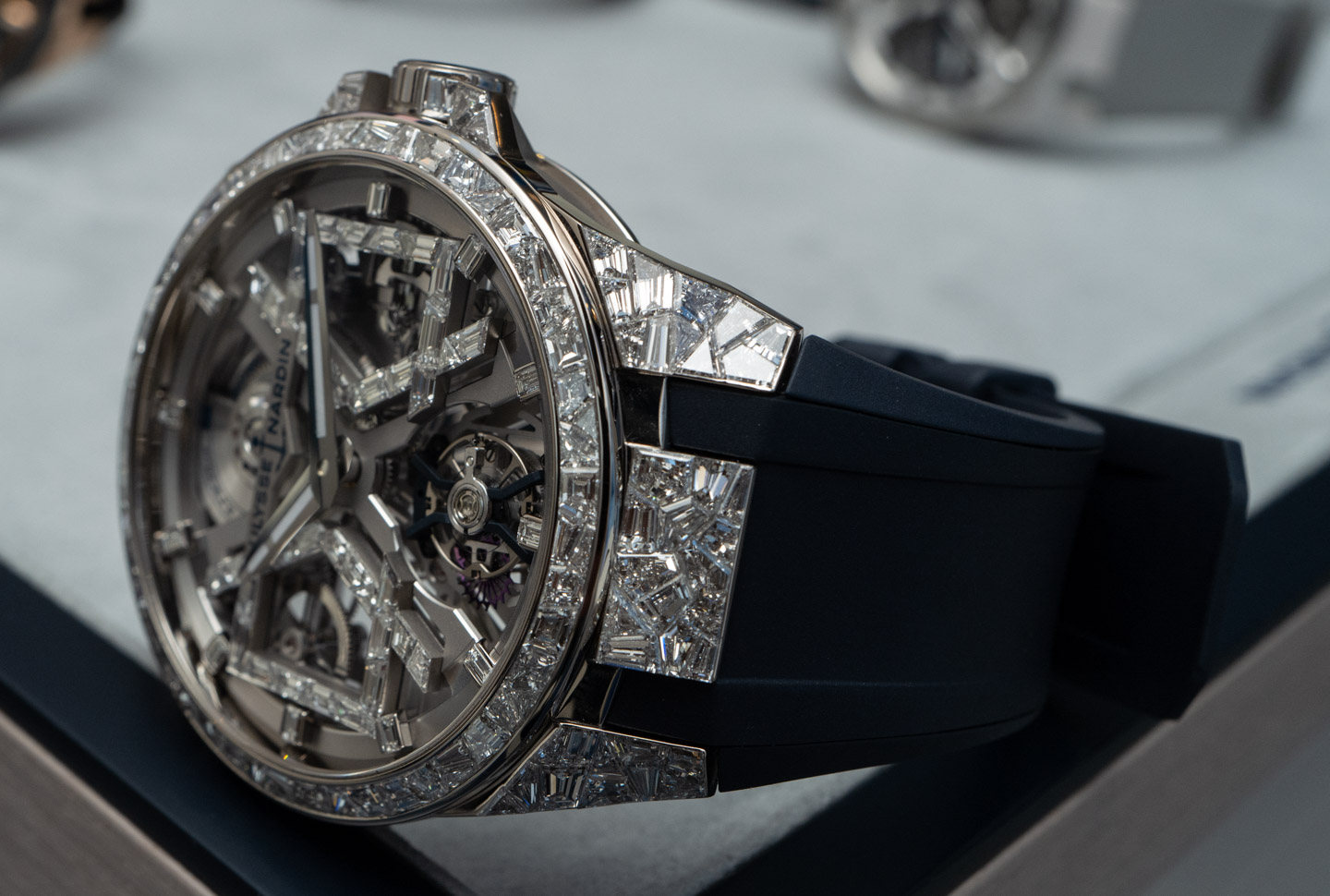 Ulysse Nardin has a challenging time explaining how the Blast fits into the market, probably because people don’t know how to elegantly explain how the product was formed. In essence, the Blast started life as a series of answers to the question, “How do we avoid making a watch that does things collector’s dislike?” The Blast was a result of Ulysse Nardin wanting to make a watch that was not too heavy on the wrist (it is very light), that isn’t difficult to read, that doesn’t have a movement that seems to awkwardly fit with the design of the case, that isn’t uncomfortable on your wrist after just a few hours of wear, that doesn’t have an expensive movement I can’t enjoy, that doesn’t feel out of touch with contemporary fashion and culture, and that doesn’t feel like an overtly overpriced luxury item. Ulysse Nardin did an admirable job of avoiding a number of common pitfalls it has observed watch collectors dislike.

The downside is that there isn’t a very sexy way to explain the Blast’s origin story. The upside is that the Blast succeeds in its mission and does a lot of stuff very well mostly by not irritating the consumer in the process. According to Mr. Sabatier, the most challenging part of the Blast project was getting the various design and engineering teams on the same page. Not they were in disagreement, but traditionally it is common for the people who design the movement never to speak with the people who design the cases (for example). For the Blast concept to work, the watch case, dial, movement, hands, and strap all needed to blend together harmoniously. To achieve this, Jean-Christophe needed to create one overarching mission that all the various design teams could buy into. 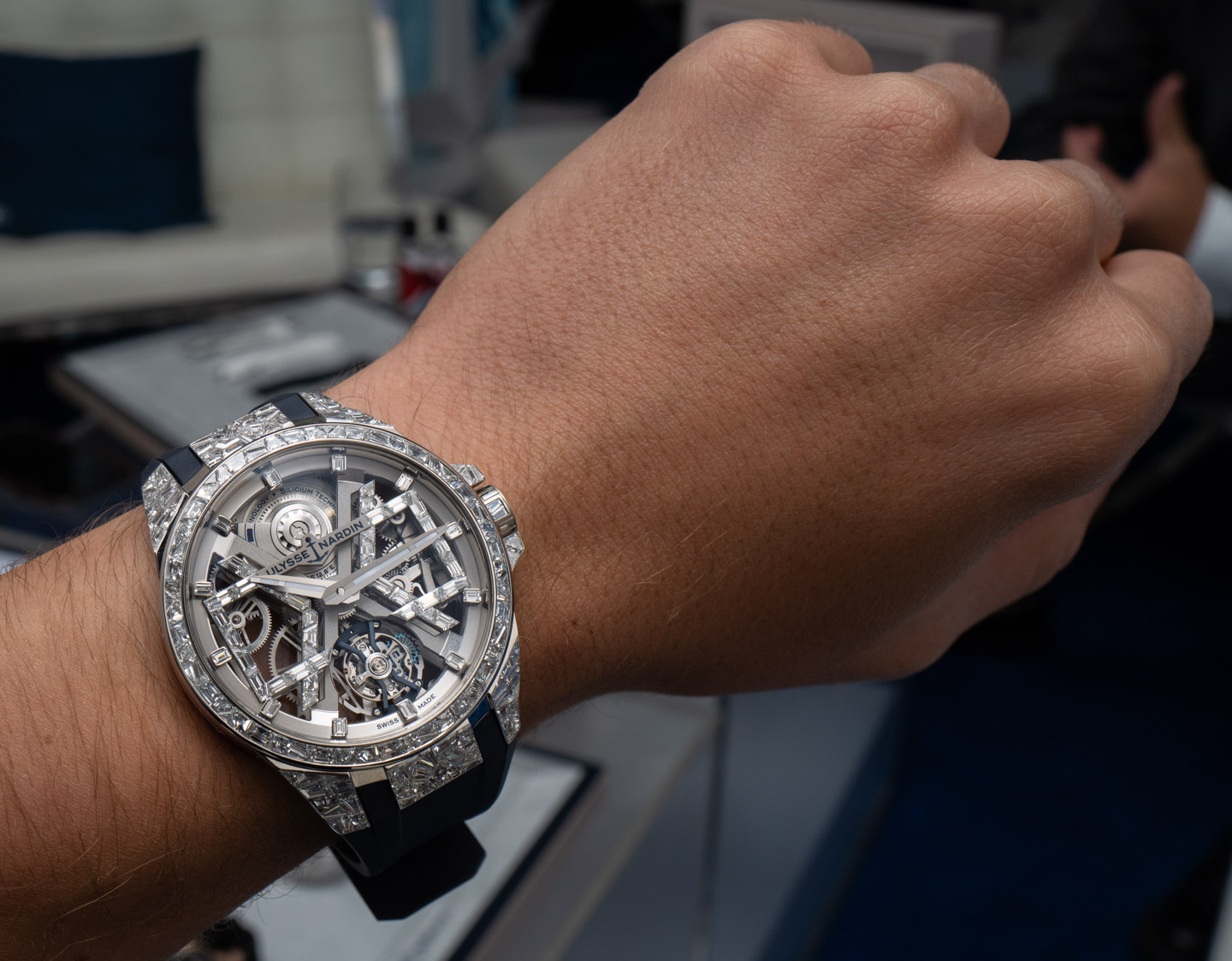 For him, it was crucial that the watch parts looked as though they were aesthetic extensions of one another. I call this congruent design. This is heavily valued in the automotive industry, which is likely where Mr. Sabatier got a taste for it. Still, today, when a watch case, dial, and movement seem to visually go together, it is often an accident. For the Blast watch family, it was anything but an accident.

Visually, the Blast isn’t for everyone, and Ulysse Nardin is aware of that. Objectively, the Blast is a good watch no matter if you are fond of its lines, or not. An ergonomic case construction, integrated strap, and novel watch strap deployant closing system all coalesce for a superior on-wrist wearing experience when compared with much of the competition. 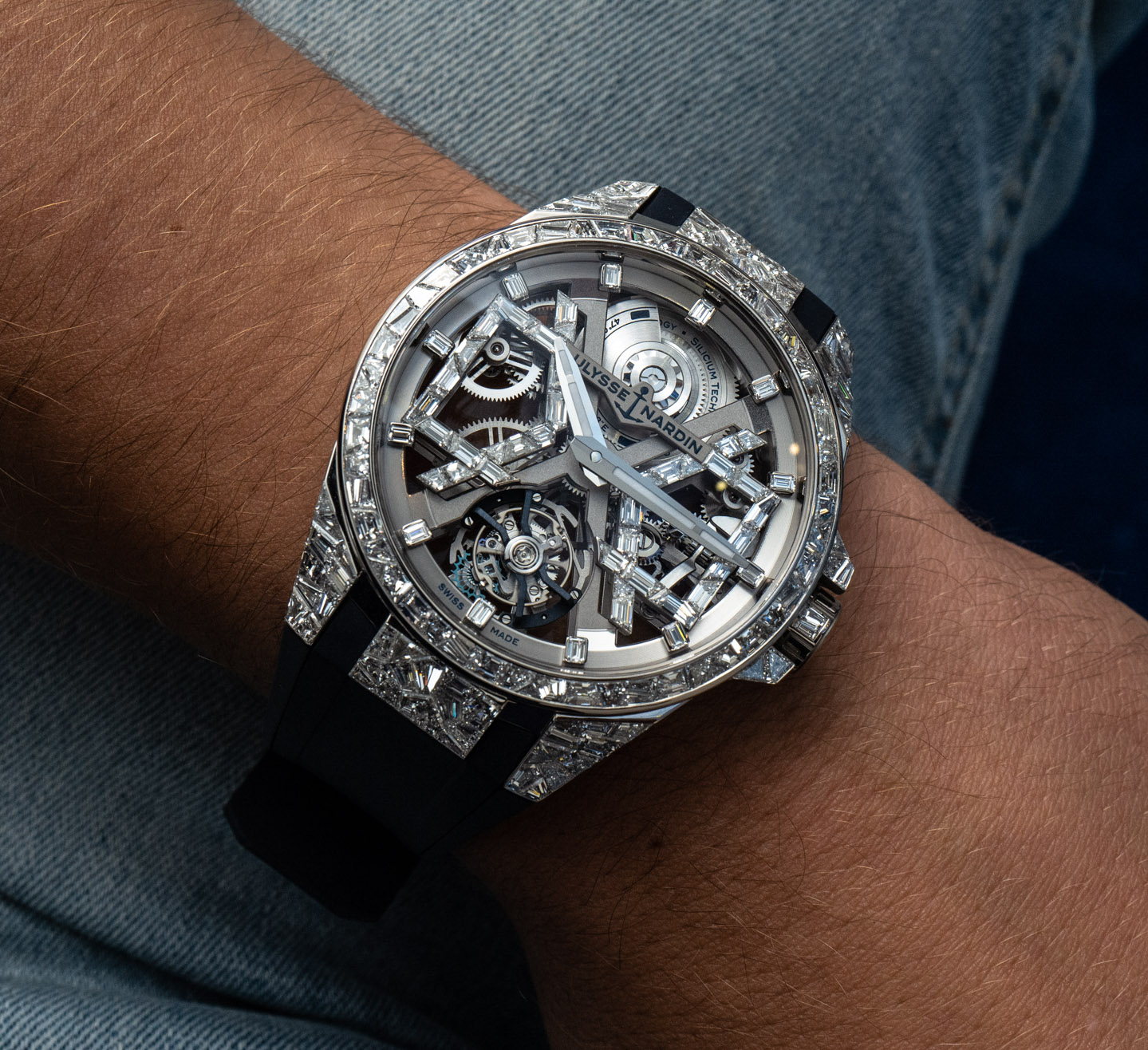 The movement inside the watch is the feature that Jean-Christophe is probably the proudest of. Visually, it features a naturally open-worked design and Ulysse Nardin’s current “X theme” visual architecture through the middle. The caliber UN-172 was developed by the group up to be both visually appealing and also an excellent performer. Without saying it, when asked about what it is younger luxury watch buyers seek in a timepiece experience, Mr. Sabatier made it clear that a visually stunning dial display was an absolute must. To capture the minds and wrists of the ever-so-important under-40 watch consumer audience, Ulysse Nardin needed to get the dial and visual presentation absolutely perfect.

Modern watch design is thus not just about materials or a particular aesthetic, but rather it is about a celebration of the larger experience of owning a high-end mechanical watch. It isn’t just about design or a brand. Rather, it is the holistic takeaway message of what the aggregate technical, construction, and aesthetic merits of the watch offer to create an exceptional wearing experience. Again, it is far more about the experience of wearing the watch than the backstory of the watch itself (though this can help certain experiences), which is important to many of today’s emerging watch consumers. 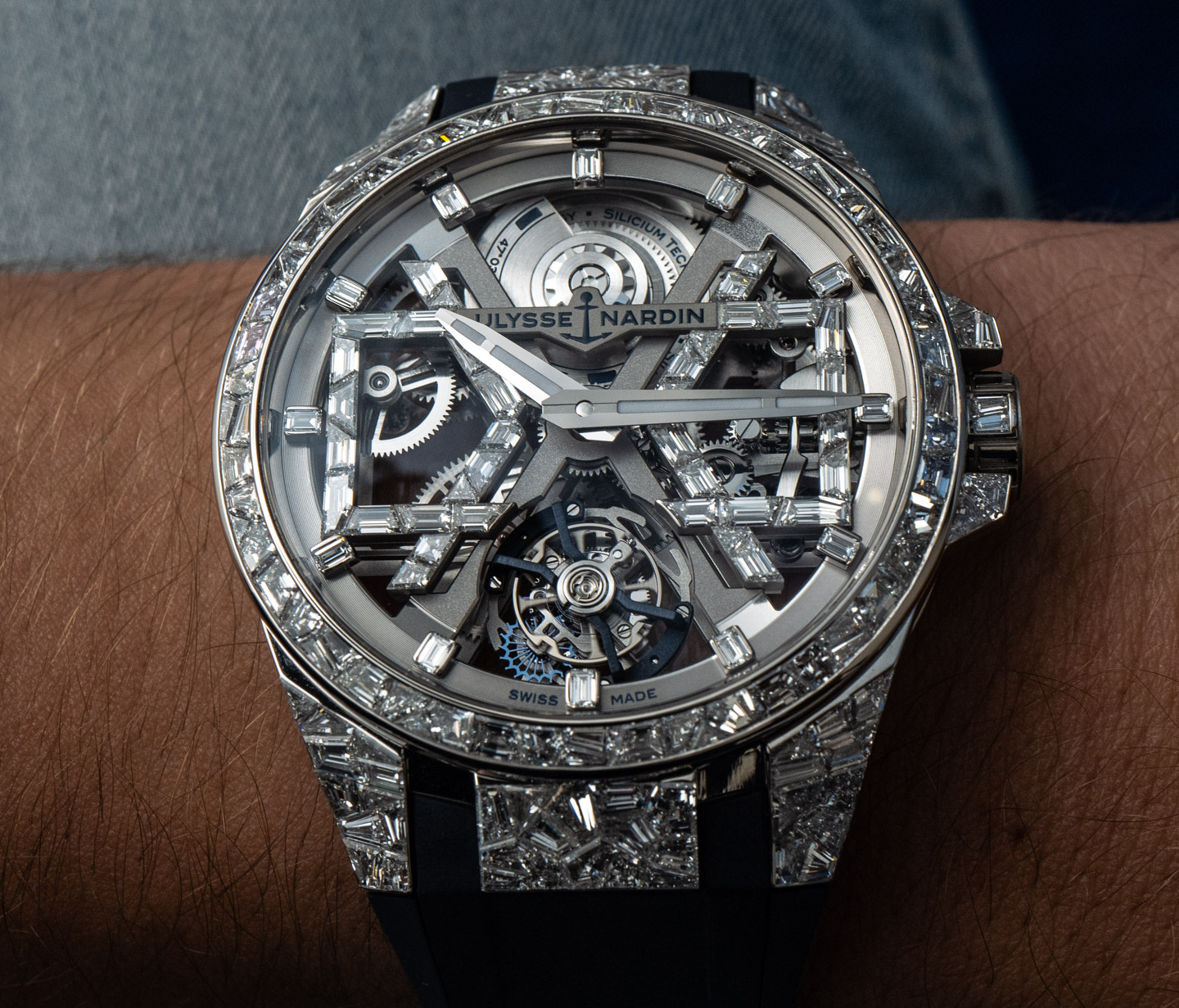 Perhaps it isn’t fair to laud the value of the Ulysse Nardin Blast watches when featuring a jewelry version that costs over $400,000. The “non-sparkling” version of the Blast does, indeed, come with a highly competitive price of around $45,000-$50,000, depending on the model. For that, you get a skeleton architecture automatic winding (via a platinum micro-rotor) movement that also happens to have a silicon escapement-equipped flying tourbillon regulation system. Just a few years ago, any similarly equipped watch would have cost at least double or triple the price (if not more). The UN-172 movement manages to be open but also an automatic, ultra-modern but with a classic sensibility, and visually splendid, while also offering a legible dial to read the time. It also operates at 2.5Hz (18,000 bph) and has a power reserve of three days. The automatic micro-rotor is placed on top of the mainspring barrel on the front-side of the dial under the 12 o’clock position.

Consumers should appreciate the level of investment put into the Blast collection by Ulysse Nardin. Rarely these days does such a large effort go into the development of a niche men’s luxury timepiece. But then again, Ulysse Nadin is a brand run by engineers (like Jean-Christophe Sabatier and his team), and the promise of creating a “go-anywhere flying tourbillon” at less than oligarchical prices simply proved too compelling a challenge. Another win for the enthusiast. Learn more at the Ulysse Nardin website here.