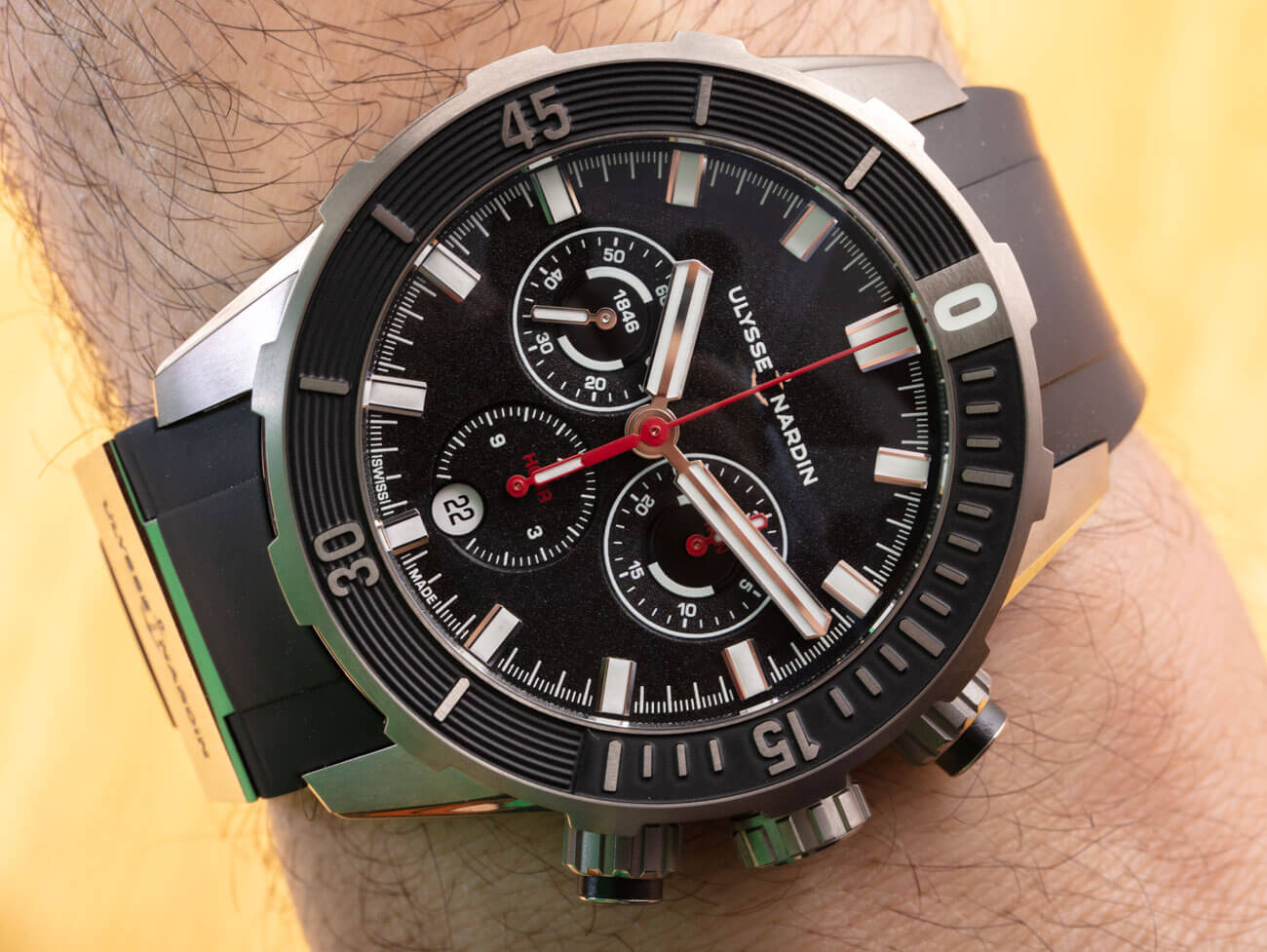 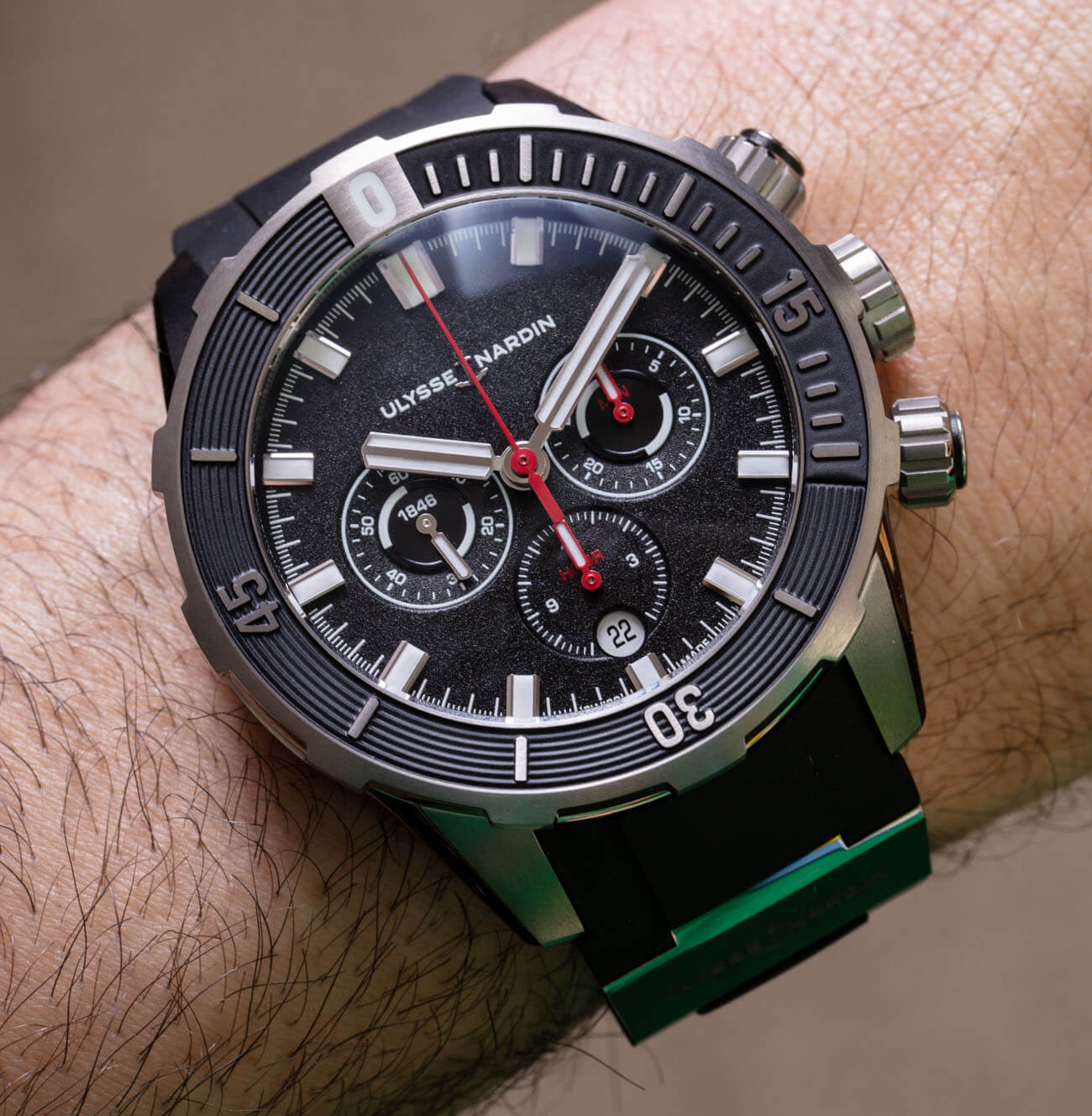 Ulysse Nardin is probably one of the most storied traditional watchmakers, both in terms of its distant and recent history. The company has produced necessary marine chronometer clocks for ship navigation (including for the U.S. Navy) prior to electronic timing and communication tools and, more recently, it was the beloved creative space of the late Rolf Schnyder (who passed in 2011), who, starting in the 1980s made Ulysse Nardin one of the most interesting and dynamic luxury Swiss watchmakers of modern times. After his death, the Le Locle, Switzerland-based company was purchased by the Kering Group of luxury brands (that also owns companies such as Gucci and Girard-Perregaux) and now, under the leadership of Patrick Pruniaux, the company is developing an even newer personality that mixes the excellent heritage of the watchmaker with a sustainable business model suitable for a global audience. For the last several years, it has been absolutely fascinating to see the trajectory Ulysse Nardin has taken with some of its more exotic products. That said, there are also its more conservative, daily-wear luxury sports watches that are a staple of what today’s watch lovers tend to prefer. Let’s take a look at the simply-named Ulysse Nardin Diver Chronograph 44mm, here reviewed as the reference 1503-170-3/92 in titanium with the black dial.

Those familiar with Ulysse Nardin will recognize the basic shape and theme of this watch as having been part of Ulysse Nardin’s larger “Marine” collection. That term is now used for other brand products, and the Diver Chronograph is given a simple, and perhaps too-direct, name. What I really like about the Diver Chronograph is that it focuses more on being a high-performance tool than being a “look at me” luxury watch — even though it certainly has some distinctive visual features. The “tool watch” approach works because it means that, from most angles, everything about the Diver Chronograph watch is functionality and purpose. 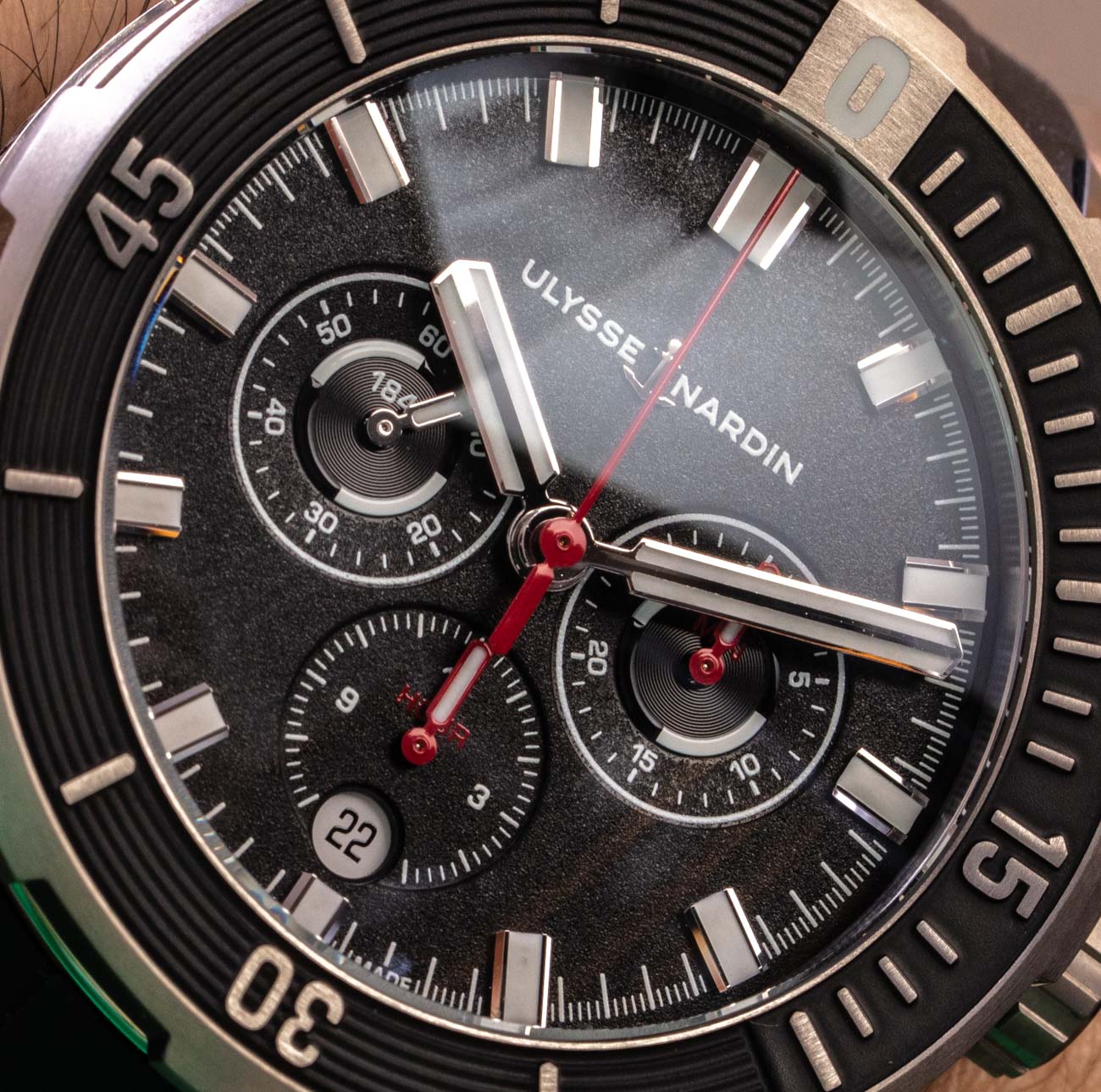 The case itself is in very finely machine titanium, and measures 44mm-wide by about 15mm-thick with a reasonable roughly 50mm lug-to-lug distance. That gives the piece a boldness on the wrist, but I have never felt that it is larger than it needs to be, and it wears very comfortably in the rubber strap. I also like that Ulysse Nardin opted for a simple strap with a traditional pin buckle. There is of course the metal “link” in the lower strap, which is part of Ulysse Nardin brand DNA, but otherwise, this is a very discreet and comfortable strap. This is contrasted with some watches at this price point that use sometimes complex, and often bulky deployant clasps. Many of those can be interesting, but in my opinion, they often add more fuss and size than what they offer in daily comfort and practicality.

Over the dial is a domed sapphire crystal with AR-coating on both sides. The dial is designed for legibility and just a hint of glitz in the form of the polished hands and hour markers. Ulysse Nardin made sure to keep the dial utilitarian with a matte, textured dial, and easy-to-see-chronograph hands. (Note that both the chronograph and main hands are given luminant for darkness viewing.) Dial symmetry is ideal with even the date being balanced within its own round window right above the 6 o’clock hour marker. Dial text is minimized and neatly integrated into places such as the out seconds scale or within the chronograph subdials. While at first, the Diver Chronograph dial can appear simple, its refined nature allows it to grow on you after having it on your wrist for a while. I further appreciate how Ulysse Nardin was able to take the essence of previous Marine Diver watches but also create something new that we’ve not seen before for the Diver Chronograph 44mm collection. 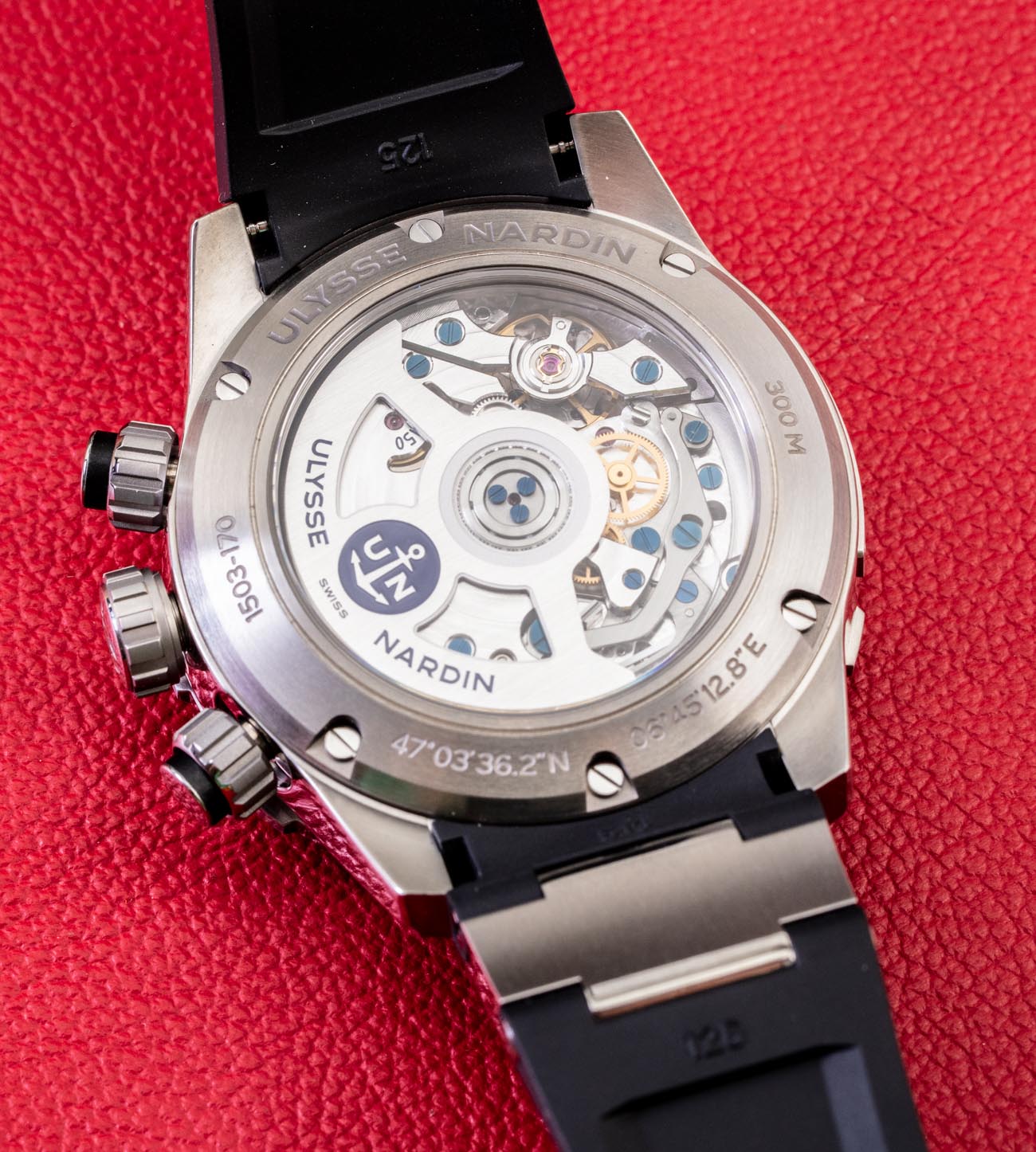 Around the dial is a smooth-acting rotating bezel that has pleasant audible clicks and whose design again takes inspiration from traditional Ulysse Nardin Marine watches, but also does something a bit new. Aside from the design of the case itself, the bezel of the Diver Chronograph is what gives this Ulysse Nardin watch its primary visual distinctiveness. The chronograph pushers are screw-down, which is a bit of a retro feature, in my estimation. While this is a tried and true means of getting more water-resistance in a diver’s chronograph timepiece, I’d like to see brands move in a direction where the chronograph complication doesn’t need screw-down pushers and that can even be fully operated underwater (maybe not down to 300 meters, but at least 50 or 100 meters). On the left side of the watch is a small metal plaque with the timepiece’s serial number. This area is used for limited-edition numbers, such as on the limited edition America-only red, white, and blue “Hammerhead” reference 1503-170LE-3/93-HAMMER version of the Diver Chronograph.

Inside the watch is a fantastic movement, the in-house-made Ulysse Nardin caliber UN-150. This movement debuted around 2013 and is the brand’s premium automatic 12-hour chronograph movement. The UN-150 is beautiful to behold and operates at 4Hz (28,800 bpm) with 48 hours of power reserve. The 322-part movement is individually regulated for performance at Ulysse Nardin and also benefits from having a silicon escapement for added timing performance. Turn the watch over to view the UN-150 movement through the caseback, which helps add an impressive presentation to this luxury sports watch. 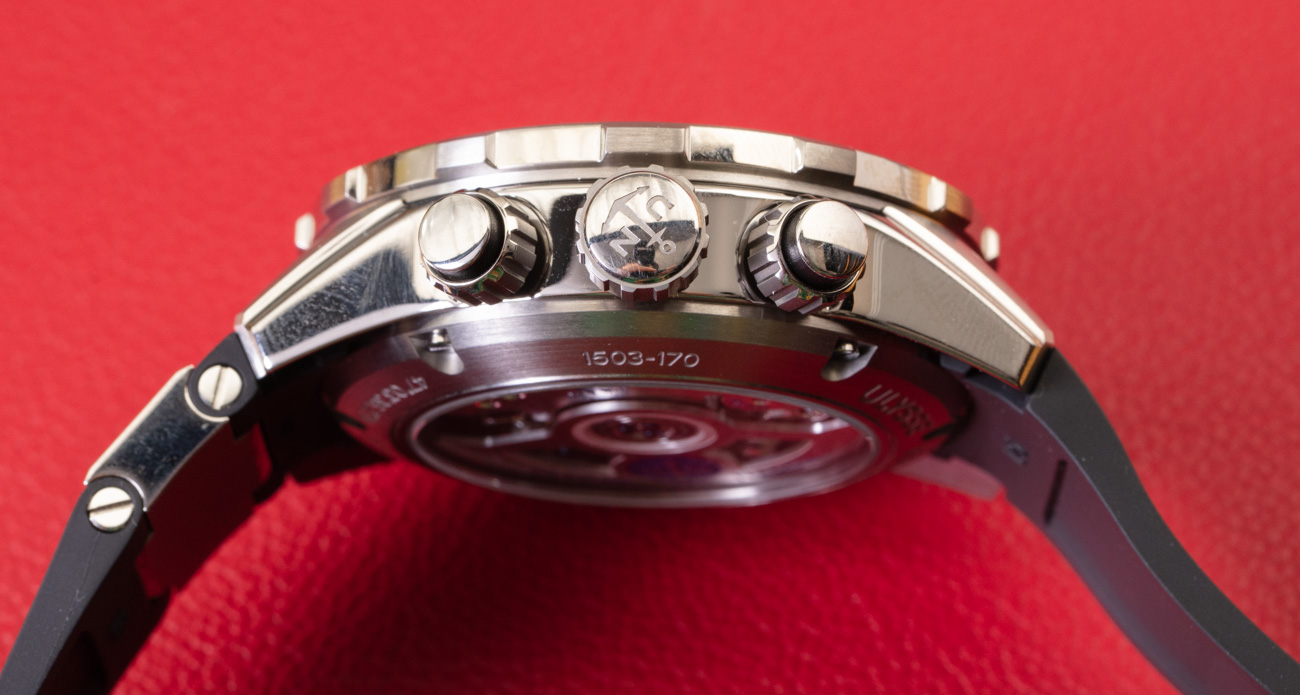 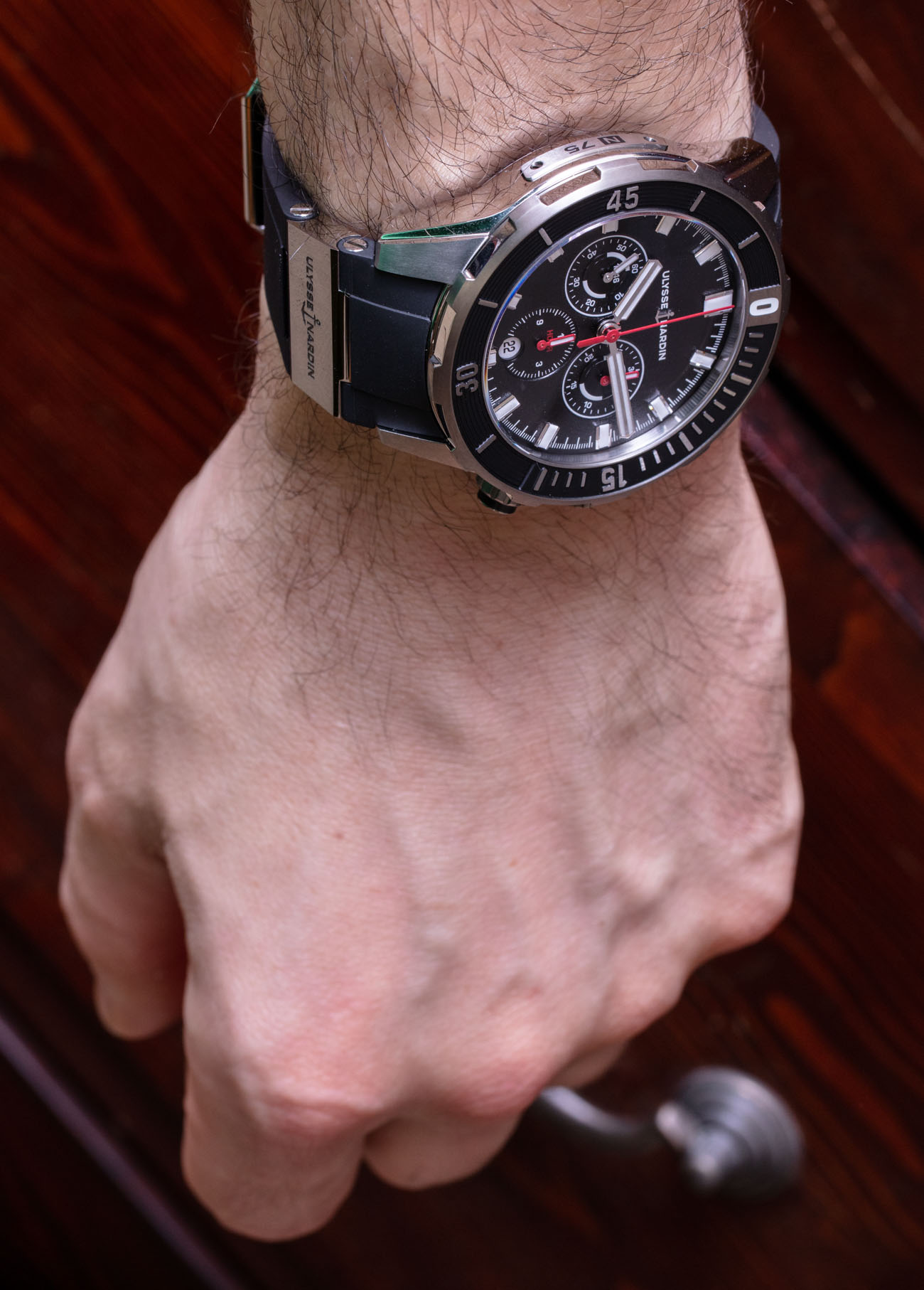 The titanium case makes the watch really feel light on the wrist, which is a good thing. Ulysse Nardin also features an all 18k rose gold reference 1502-170-3/93) version of the Diver Chronograph 44mm that is nearly four times the price (at $38,500 USD) of this titanium model — and comes with the extra weight of gold to boot. That is a wonderful option for those who want to go swimming with a gold watch, but as a tool piece I’m not sure that gold is the best choice — so, my option would be titanium. I think the real value of the Diver Chronograph is a daily wear timepiece if you live in the tropics or warm place where you not only will sweat a lot, but also don’t want to think about swapping out your “nice watch” for something else when you want to submerge yourself in water. That also makes the Ulysse Nardin Diver Chronograph a great “vacation” watch if you are traveling to a tropical zone. 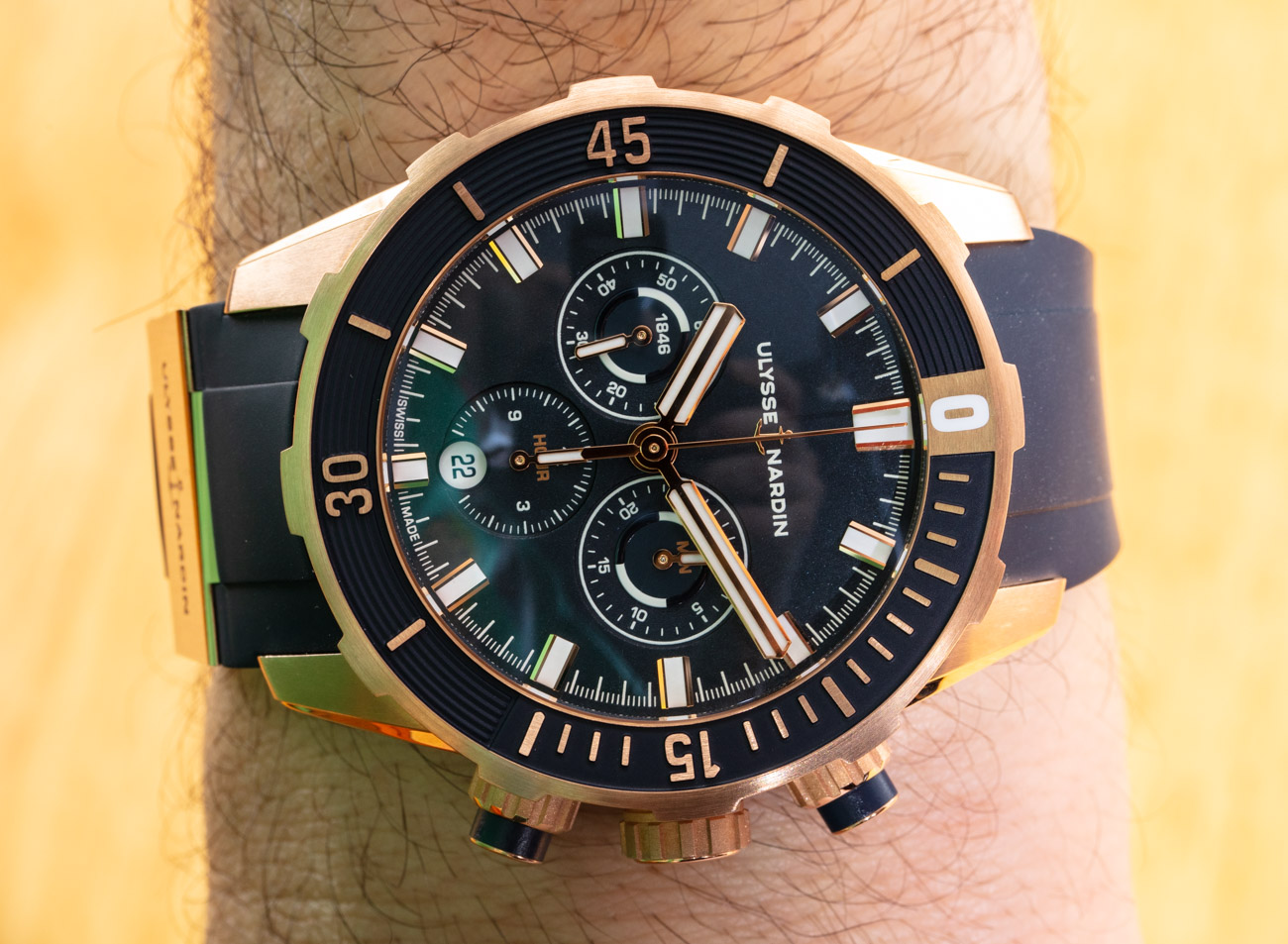 Necessary Data
>Brand: Ulysse Nardin
>Model: Diver Chronograph 44mm reference 1503-170-3/92
>Price: $11,500 USD
>Size: 44mm-wide, ~15mm-tall, ~50mm lug-to-lug distance.
>When reviewer would personally wear it: When on vacation in a tropical place when I want to wear the same nice watch into the ocean and into the restaurant.
>Friend we’d recommend it to first: Otherwise conservative luxury watch buyer who demands actual performance from their sports watches. Best for those seeking something outside of the traditional brands who wants something under-the-radar, but impressive if inspected by other watch lovers.
>Best characteristic of watch: A new level of design refinement shows that Ulysse Nardin is serious about adopting some of its quirkier (but cool) designs for a more mainstream luxury audience. Legibility and wearing comfort are very high. Great, in-house-made movement.
>Worst characteristic of watch: At first glance seasoned watch collectors might find the overall design underwhelming. The watch could also use a more exciting name. Screw-down pushers feel like they could be modernized a bit to not require screwing and unscrewing to operate chronograph safely in wet environments.