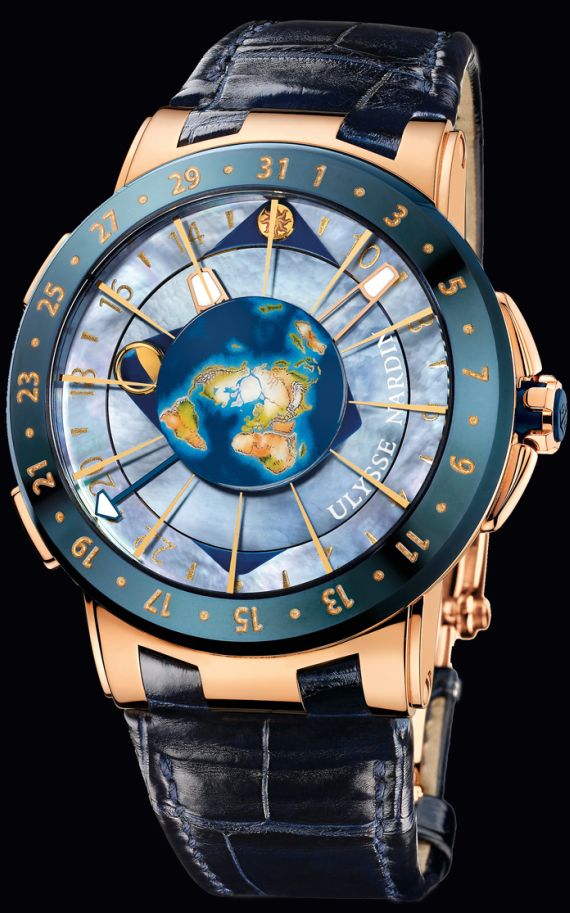 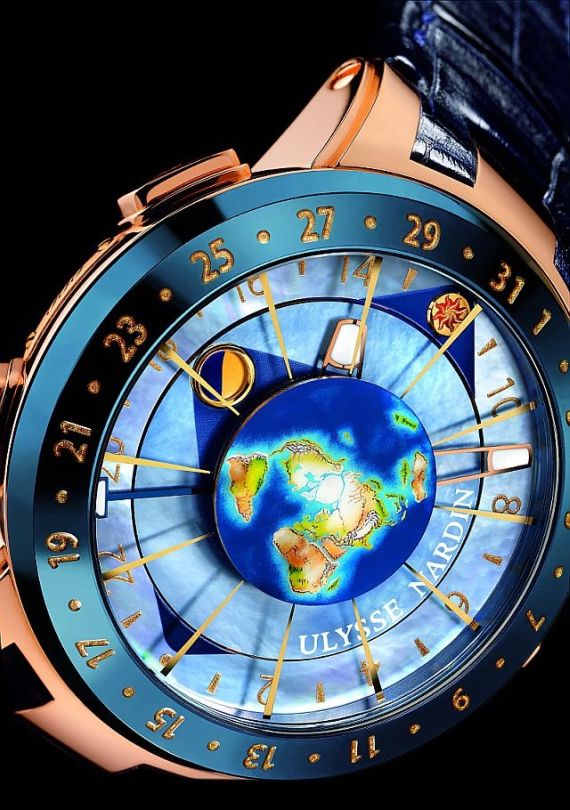 This is the newest celestial watch from Ulysse Nardin. Announced about a year ago, I wanted to wait until closer to when you might be able to get one before discussing it. I believe that it is the most polished and refined of their celestial watches yet – even though it is not the most ambitious in terms of the information it displays. You can read about at least two other Ulysse Nardin celestial information watches I discussed here, and here. A celestial watch in short is a timepiece that provides information about something happening off of Earth. This usually involves something about the placement of the sun, moon, or planets in the solar system. Once in a while you get other information that is related such as equinoxes and other such periods.

I’ve had trouble reading more celestial watches because A) I am not used to reading information like that, and B) because I am not an astronomer. The pictured Ulysse Nardin Moonstruck is different actually. It uses a friendly visual system to indicate to you what you are looking at. Right there in the middle of the watch is an image of Earth. Right away you get a good idea of what you are looking at, and that the indicators around it relate to the perspective you would have while being on Earth. As such, you have two main celestial indicators on the dial – the moon and the sun. As to the moon, it is a bit more complicated. It not only shows the relative position of the moon around the Earth, but the phase of the moon as well. Therefore, there is a small orb on the dial of the Moonstruck watch. It spins on its own axis revealing the phase of the moon, and it also spins on a disc around the large Earth disc in the middle of the dial. To combat the fact that a true moon phase cycle is actually 29.53124 days long (not the 29.5 days you typically see), Ulysse Nardin has instituted a gear system in to the watch so that you really only need to adjust the moonphase indicator on the Moonstruck watch each 120 years or so. 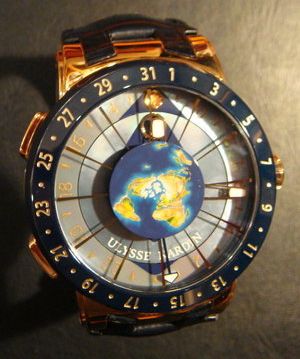 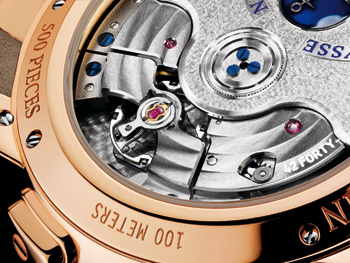 Now it gets really cool. Notice the disc that has the little sun image on it. This also revolves around the Earth on the watch. The position of the sun is actually placed properly so that you can imagine light shining from it to the moon. Thus the “lit” side of the moon orb will always face the sun disc. See what I mean? Thus, the moon orb on its disc is made to turn so that the lit section always faces the Earth and the sun is placed properly as it would be in relation to the Earth to show you how its light is lighting up the moon from our terrestrial perspective. Sorry if any of this is getting complicated. Study the images a bit and it will all be clear!

So the sun moves around the Earth each 24 hours, showing you the relative position of the sun around the Earth. Remember that the view of the globe is from its “top.” Other functions on the watch include a GMT indicator disc (and hand) as well as a date hand (the date indicators are placed in gold on the blued bezel). Least we forget the hands for the actual time. For the hour and minute hands, they are bold and lume covered. The sapphire crystal has gold lines applied to it for each of the 12 hours so that telling the time is not that hard. 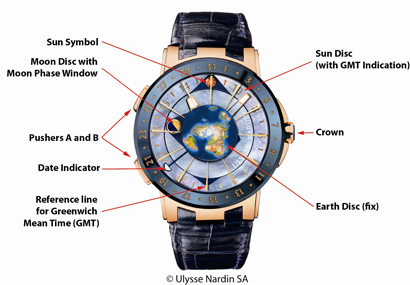 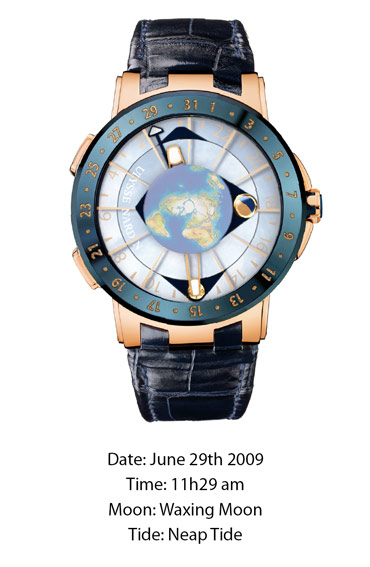 The GMT disc gets a little complex, because it moves as well. It does this to show the time around the globe, and can also be used in conjunction with the sun placement indicator disc. Part of Ulysse Nardin’s in-house made and designed UN 106 automatic movement (inside the watch) is their special GMT + / – system that allows the GMT hand to move in either “direction” so that you don’t need to go around in a full instance to get the desired second time zone indication that you want. This is done via pushers on the side of the case. For a bit more about the creation of the movement and the people behind it, you can ready my colleague Elizabeth Doerr’s discussion on World Tempus here. By the way, follow in Ulysse Nardin’s tradition of upping the technical ante of its movements, the caliber UN 106 movement uses plenty of silicium (such as for the escapement and hairspring). This means such parts don’t require lubricant.

There are other aspects to the Moonstruck watch’s indications that I haven’t quite gotten into. These include being able to determine things like the tides or seasonal data that understanding the position of the sun and moon in relation to the Earth can indicate. These aren’t explicit functions of the watch, but the layout allows for you to determine this information with a little skill. If you want to invest in one of these limited edition watches, no doubt you’ll study up on these things. By the way, the watch itself is 46mm wide and comes in a limited edition of 500 pieces in 18k red gold, and 500 pieces in platinum. The watch is fitted to a custom alligator strap with matching gold or platinum clasp. The Ulysse Nardin is undeniably a cool watch. It is also a very pretty watch. Wearing it will not lead you to looking like a rich nerd like some of the other luxury celestial watches. Price? Around 50,000 euros for the gold version.