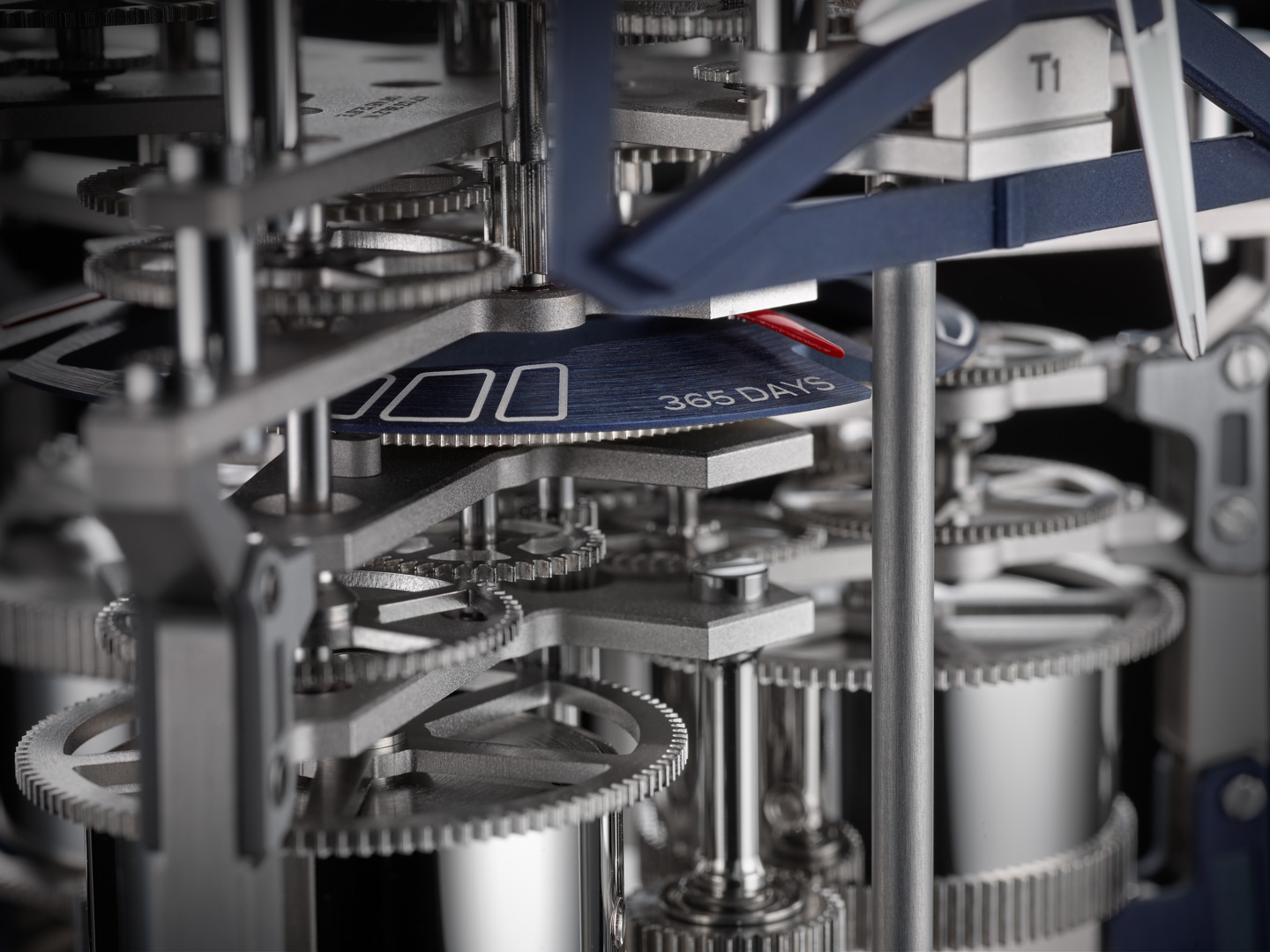 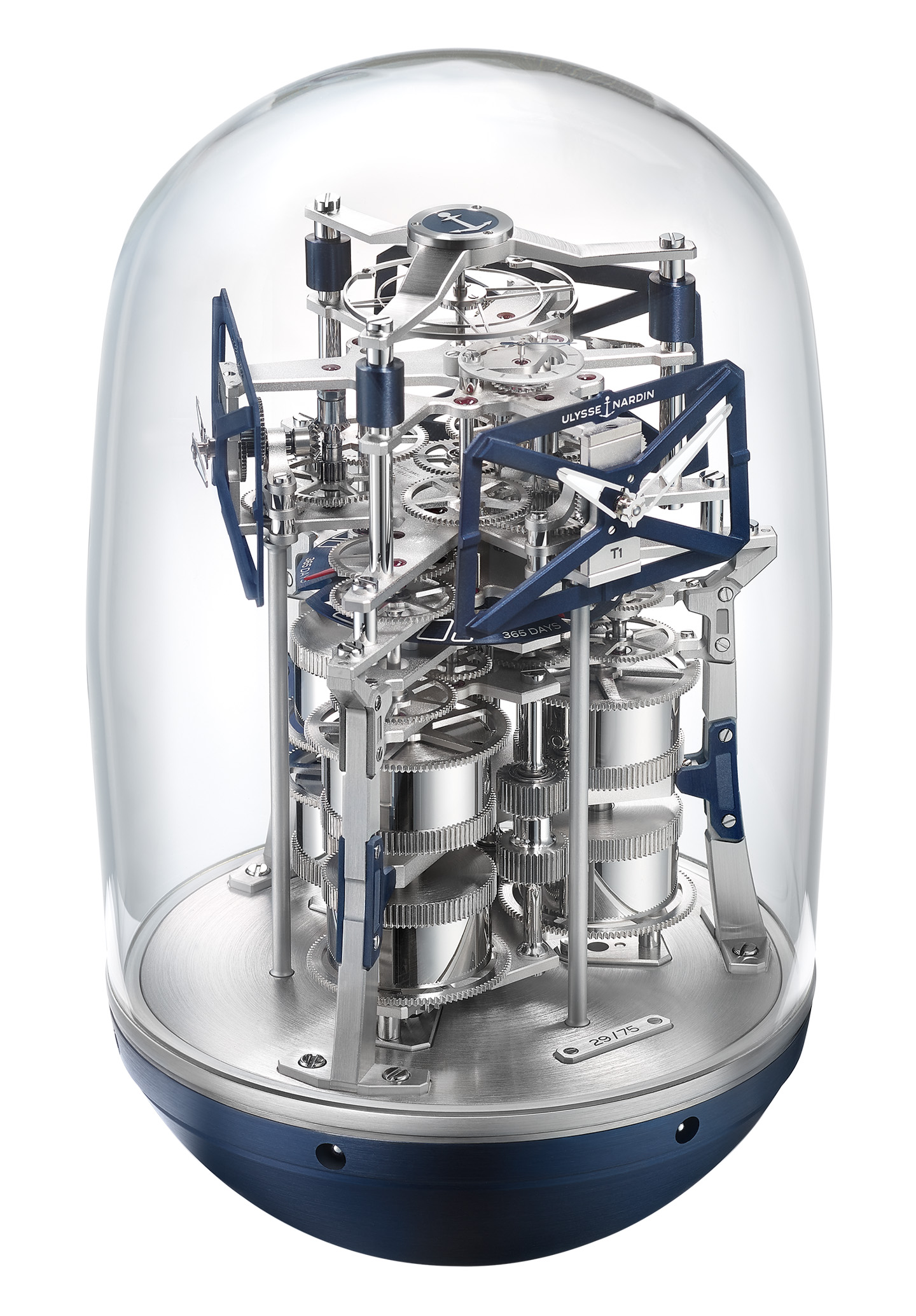 It has been a few years since Swiss Ulysse Nardin debuted a new high-spectacle desk clock. The last one was meant to look like a yacht (which makes sense coming from a brand known to participate at boat shows), and this new limited-edition desk clock for 2021 has a slightly different twist on celebrating the brand’s rich history with making chronometers for the sea. The new Ulysse Nardin UFO is a remarkable machine with a power reserve of a full year, but it’s also an interesting artistic twist in regard to how it moves.

Shaped like a buoy of sorts, the UFO looks more like an “unidentified floating object” than an “unidentified flying object.” Accordingly, its teardrop-like shape is designed with a rounded base that is also a weight. Ulysse Nardin imagines that the swaying motion of the UFO can remind the viewer of the motion of ocean waves in the middle of the sea. The aluminum and tungsten bottom of the Ulysse Nardin UFO is heavy enough to create a gentle (yet stable) swaying motion to the entire device if pushed (or even blown upon) gently. This isn’t new, per se, as the art field has had a number of “wobbling” sculptures that create such motion. Or perhaps you have some experience with various types of free-standing weighted boxing bags (good heavens, never punch the UFO) to imagine a similar movement effect. 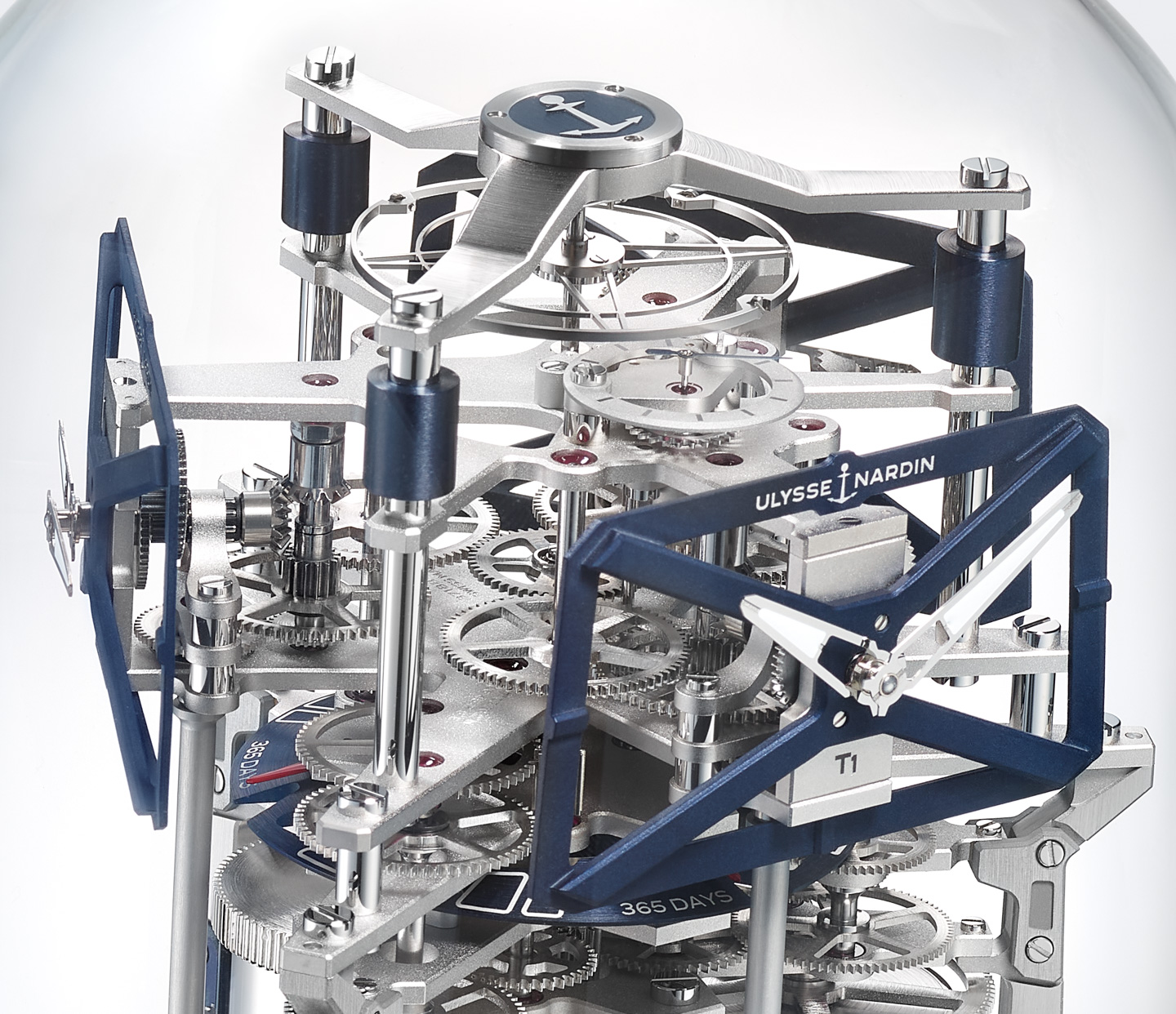 The UFO clock (known as the Ulysse Nardin caliber UN-902) itself is engineered like a tower of 663 components, which is massive enough to have three watch faces in order to allow for reading of the time from various visual angles. Actually, each of the three clock faces can be set to a different time, or synchronized to indicate the same time. The entire assembly weighs 7.2 kilograms. At the top of the tower is the visually spinning balance wheel, while part-way down is a power-reserve indicator. You might forget to check it very often, given that the six massive mainspring barrels give the Ulysse Nardin UFO a fully 365 days of power reserve. The movement is manually wound via a key that is inserted into the side of the aluminum base. 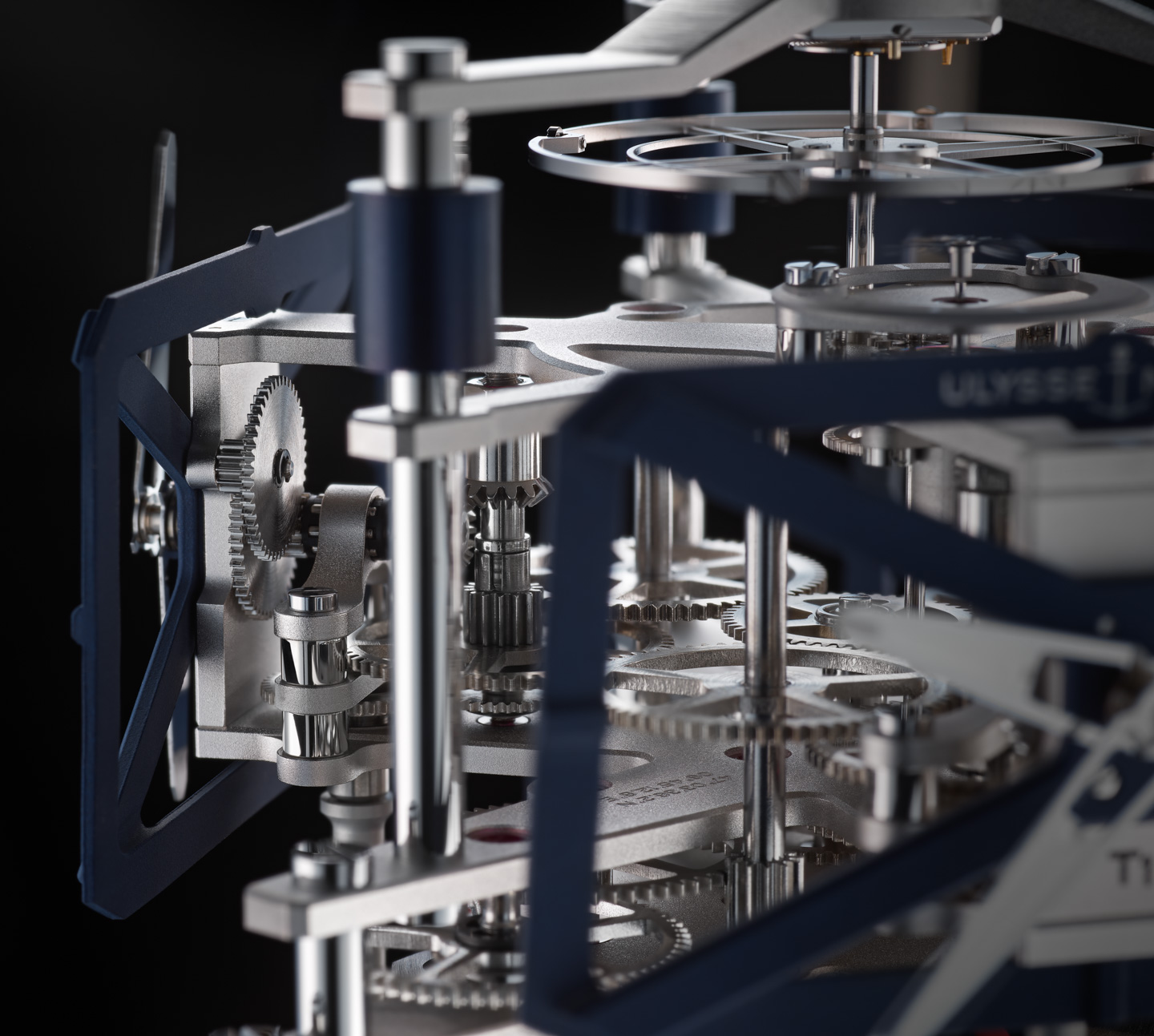 The balance wheel is a full 49mm-wide and beats at a very slow 0.5Hz (7,200 beats per hour). That means it takes two seconds to make one full oscillation. This helps provide the extremely long power reserve, and the slower motions of the regulation system no doubt helps add to the mesmerizing effect of the entire composition. Connected to the regulation system is a dead-beat seconds hand (not enough power for anything else, otherwise) that sits horizontally under the balance wheel. It is unknown how much rocking the UFO back and forth affects its timekeeping potential, but I think that is probably entirely beside the point. 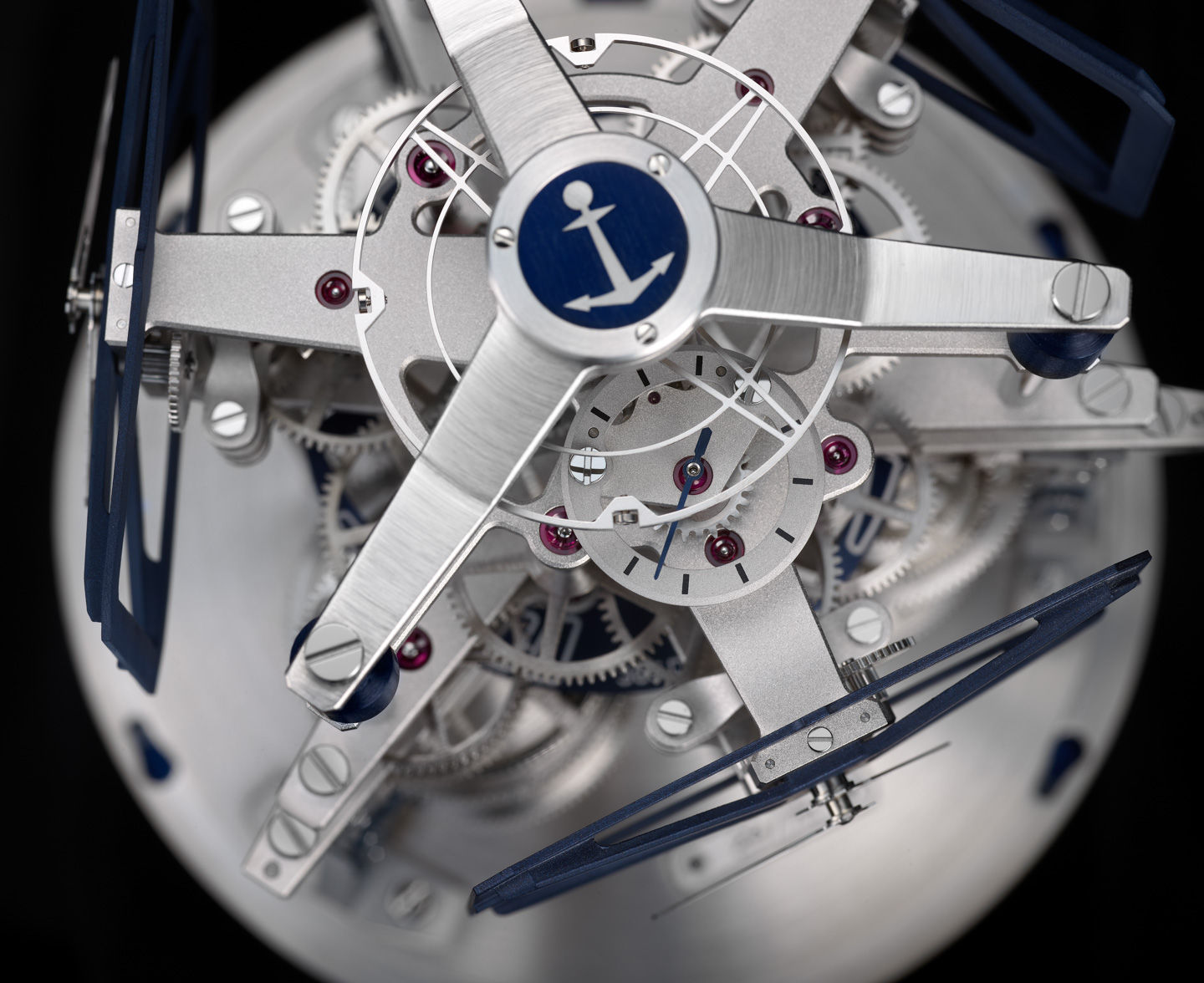 The mechanical work of art that is the UFO clock sits inside a bespoke-made hand-blown 3mm-thick glass dome. The visual experience is marvelous, and it is so nice to know that the clock itself is protected from dust, etc… The assembly is sized at 250mm-tall and 150mm-wide (so it really isn’t all that massive). I also wouldn’t try to see if it floats… Items like the Ulysse Nardin UFO are fantastic given their artistic and mechanical interest as highly rarefied gifts and showpieces. Not everyone might admit to pre-ordering one, but who do you know who wouldn’t be darn proud to display a Ulysse Nardin UFO clock in their home or office? Seen here as the reference 9023 900LE 3A BLUE Ulysse Nardin UFO with the blue base, it is a limited edition of 75 pieces with a price of $39,000 USD each. Learn more at the Ulysse Nardin website here.