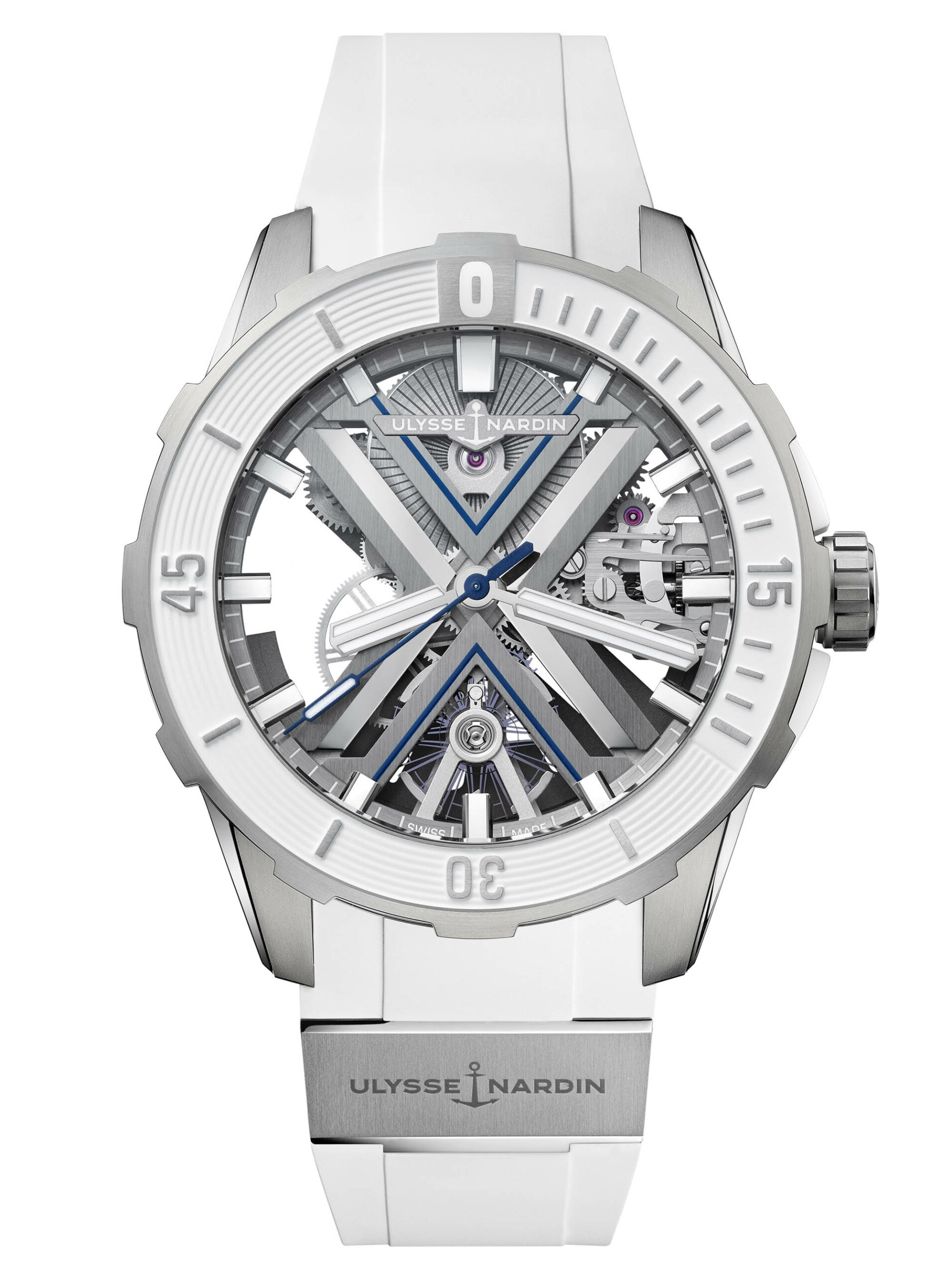 Given that one of the primary requirements of a dive watch is maximum legibility, a skeletonized diver almost seems like a slight paradox. However, it’s hardly a secret that very few people actually rely on mechanical dive watches for scuba diving these days, and since most collectors ultimately appreciate high-end dive watches for their technical capabilities, showcasing the internal mechanics simply offers people an additional way to admire the technology that goes into them. Originally launched in 2021, the Ulysse Nardin Diver X Skeleton series combines the open-worked aesthetic of the brand’s Blast collection with the rugged case of its dive watches. By exchanging a bit of legibility for a highly open-worked design, the Ulysse Nardin Diver X Skeleton models are able to offer a highly striking appearance, without sacrificing any of the water resistance that people expect from a diver. The original Diver X Skeleton model followed a blue and orange color profile, while the follow-up version from last year embraced a largely black and yellow colorway. For 2023, a third edition is making an appearance, and the Ulysse Nardin Diver X Skeleton White (ref. 3723-170-1A/3A) reimagines the brand’s popular open-worked dive watch with a crisp white monochromatic aesthetic. 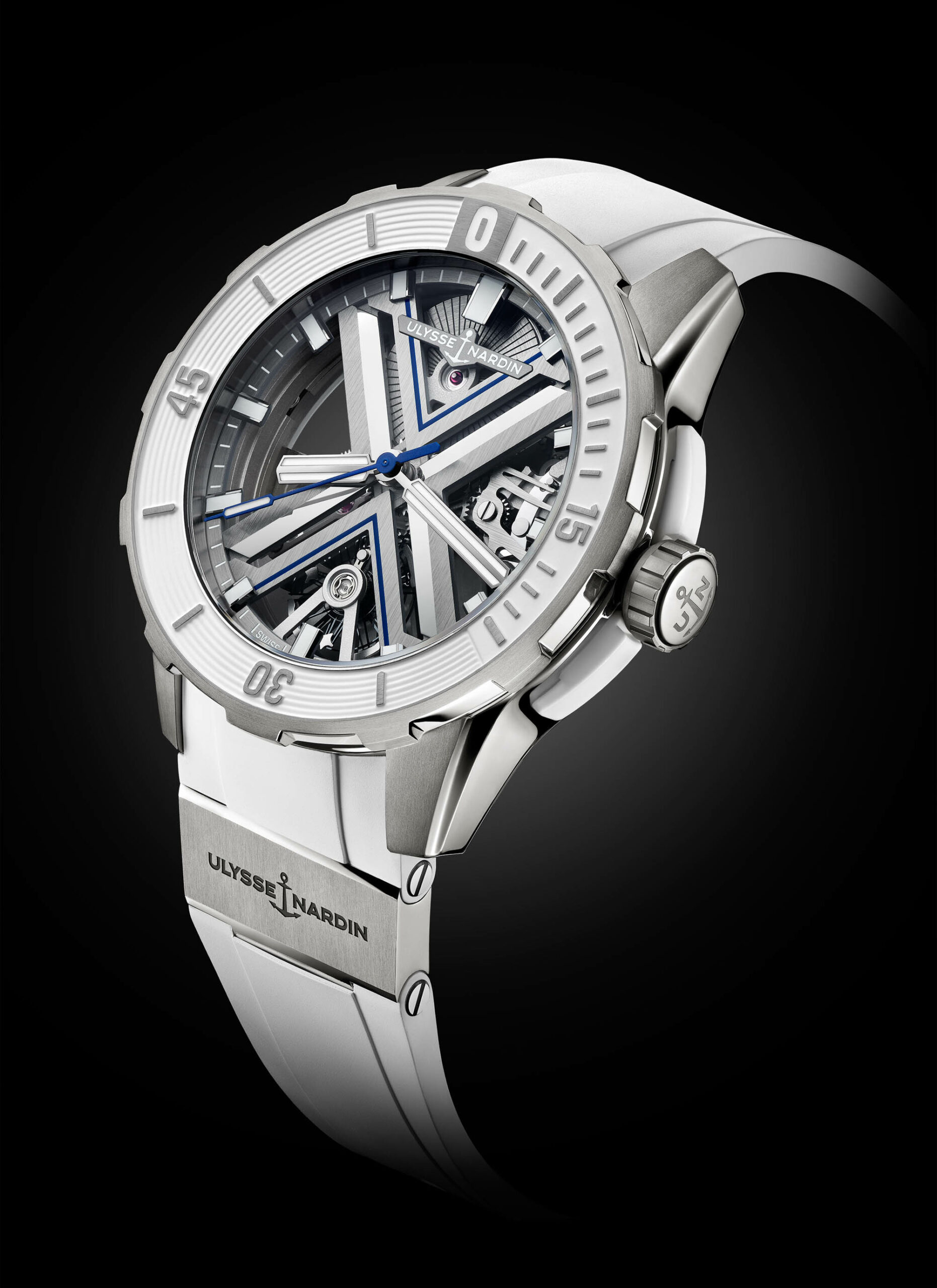 Like previous editions, the case of the Ulysse Nardin Diver X Skeleton White measures 44mm in diameter by 16mm thick. However, rather than having a blue or black finish like its two predecessors, the titanium case of the Diver X Skeleton White receives brushed and polished surfaces to better correspond with icy white color profile. Beyond the updated color and finishing, the overall design of the case is the same as previous editions of the Diver X Skeleton, and it comes complete with white rubberized crown guards flanking a signed screw-down winding crown, along with sapphire crystals fitted to both the dial side and caseback for an unobstructed view of the watch’s highly skeletonized automatic movement. Like before, water resistance remains at a respectable 200 meters; however, rather than having a bezel with a carbon insert, the bezel on the Ulysse Nardin Diver X Skeleton White is crafted from titanium with a white rubberized inlay and its numerals in relief. Fitted to the lugs is a matching white rubber strap with a titanium deployant clasp and a single titanium link built into the 6 o’clock side, plus an additional white fabric strap is also included as an alternate option that maintains the model’s all-white appearance. 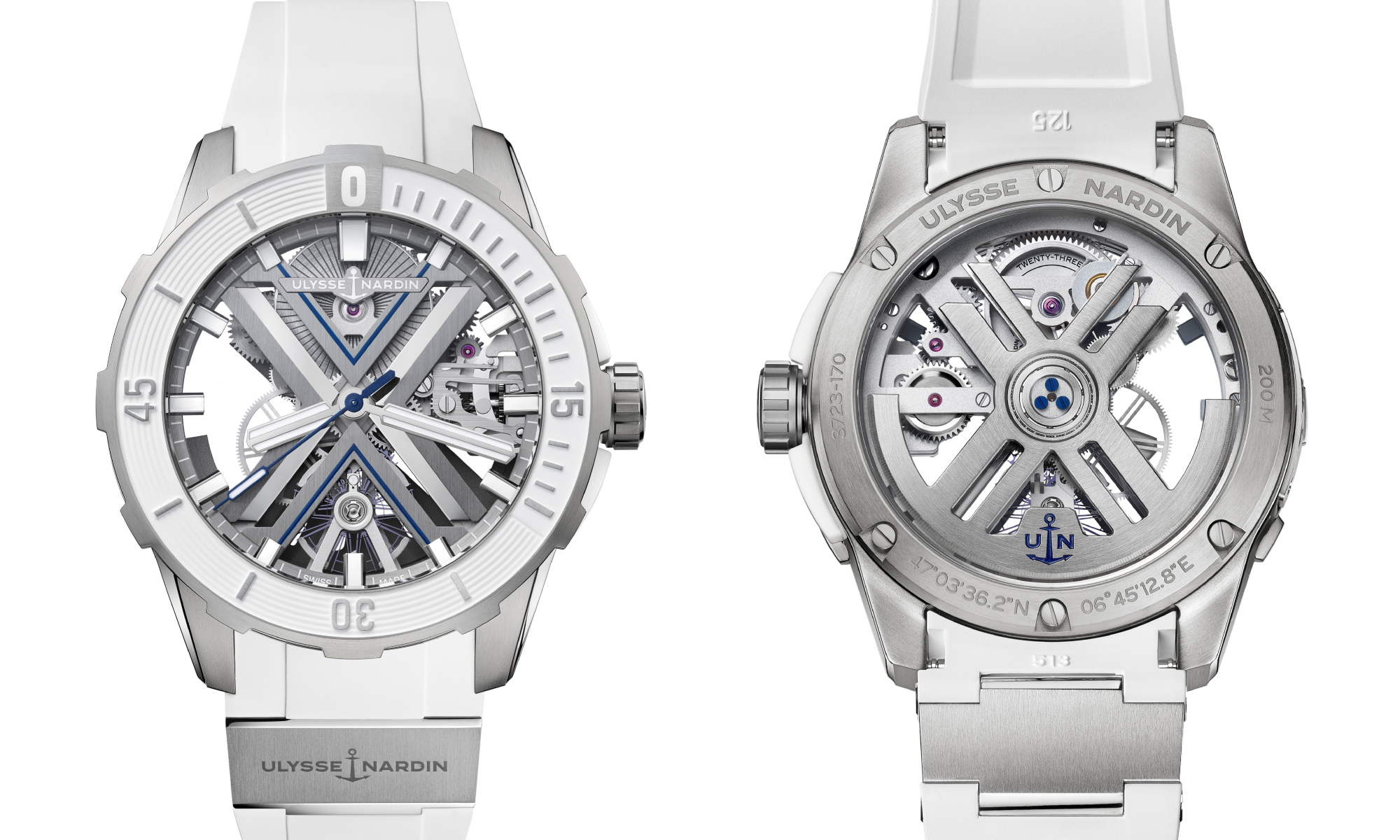 Similar to the case, the overall design of the face of the watch is largely carried over from the previous two iterations of the Diver X Skeleton series. Taking the place of a traditional dial on the Ulysse Nardin Diver X Skeleton White is a large open-worked area with a prominent X-shape running through the center that more-or-less serves as the mainplate for the movement. The X-shaped structure receives small blue accents that match the finish of the seconds hand while surrounding the opening along the interior perimeter of the crystal is a gray chapter ring that contains the hour markers and a minute track printed in white. The paddle-shaped hands and hour markers all receive an application of Super-LumiNova for added visibility in the dark, and while the large X in the center is the visual focal point of the Diver X Skeleton series, the true purpose behind the highly open-worked design is to show off the various components of its internal movement. 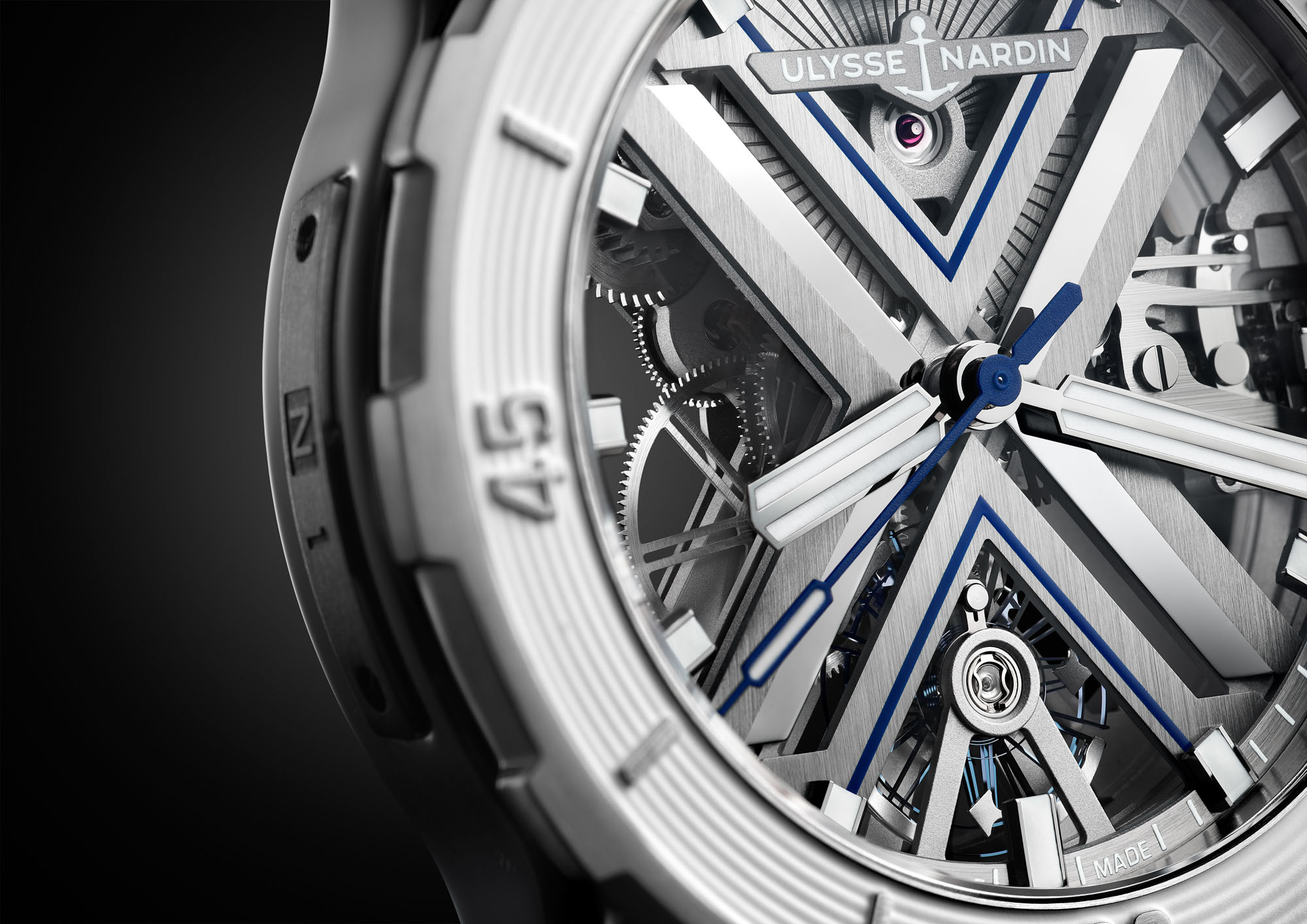 Powering the Ulysse Nardin Diver X Skeleton White is the same in-house Caliber UN-372 automatic movement that can be found inside the two other colorways from the series, which runs at a frequency of 21,600vph (3 Hz), with a fairly ample power reserve of approximately 96 hours. Consisting of 171 individual parts, the Cal. UN-372 features silicium components for its balance spring, pallet, and escapement wheel for increased resistance to magnetism. The large silicium oscillator can be seen through the bottom of the X-shaped structure at the 6 o’clock location, while the barrel for the mainspring sits opposite it through the top opening in the X at the 12 o’clock location. Tasked with winding the watch is a large skeletonized X-shaped rotor mounted to the reverse side of the movement, and due to the highly open-worked design of the Caliber UN-372, the vast majority of its components can be seen through both the front and back side of the watch. 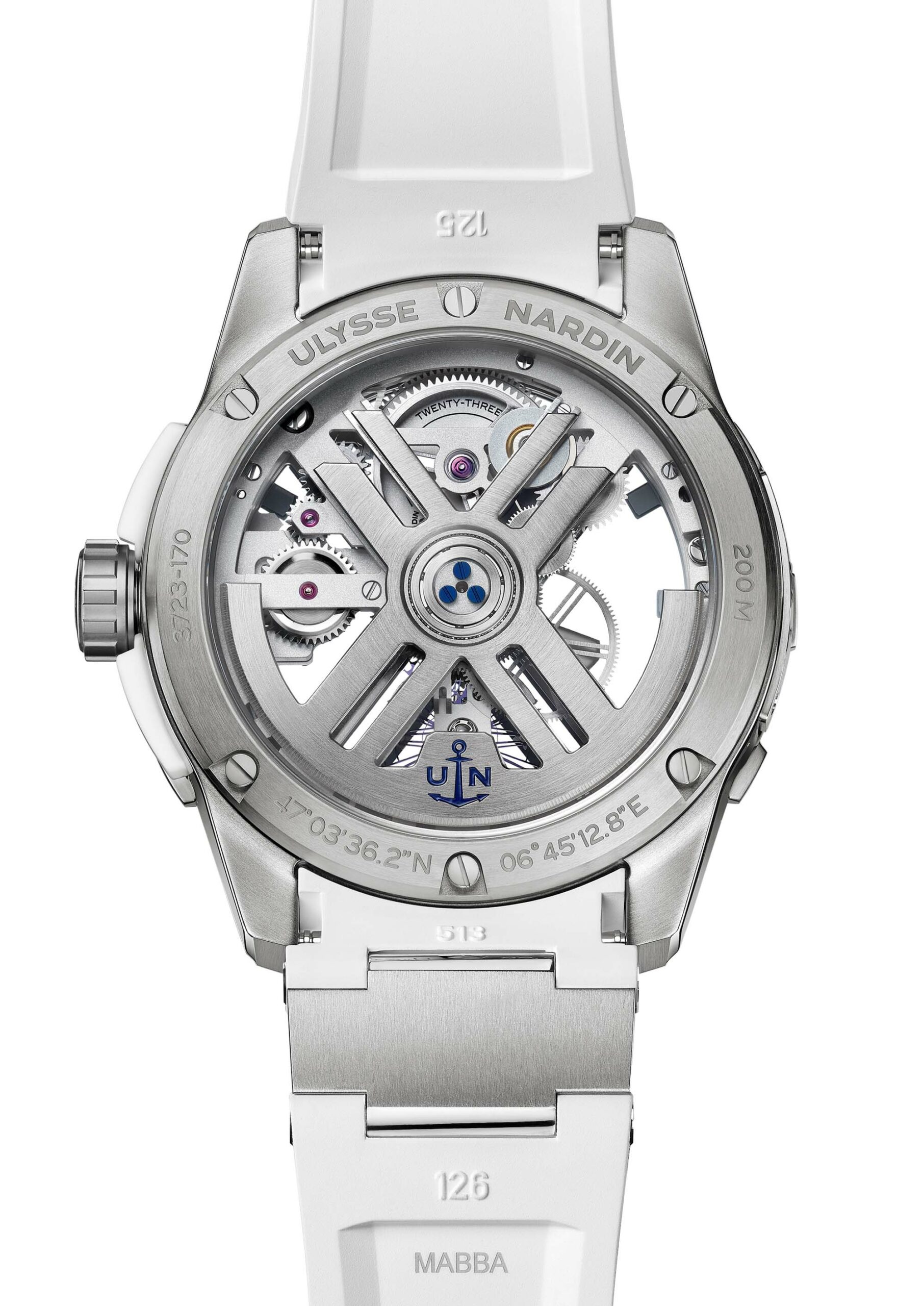 When it comes to pricing, the new Ulysse Nardin Diver X Skeleton White is more-or-less right in line with its two predecessors and is accompanied by an official retail price of $26,400 USD, which makes it just slightly less expensive than what Ulysse Nardin currently charges for the black version of the Diver X Skeleton with the carbon bezel insert that debuted last year. While the new white edition is essentially just an updated version of an existing model in a colorway that already existed among the chronograph variant from Ulysse Nardin’s current dive watch lineup, its bright white color profile offers a significantly different aesthetic compared to the previous two editions of the brand’s popular skeletonized diver. It’s not uncommon to see watch brands put a traditionally feminine design twist on the various white-colored versions of their watches, and it’s refreshing to see Ulysse Nardin embrace an all-white color palette for its latest Diver X Skeleton model while still maintaining the same rugged and bold design as the original. For more information, please visit the brand’s website.