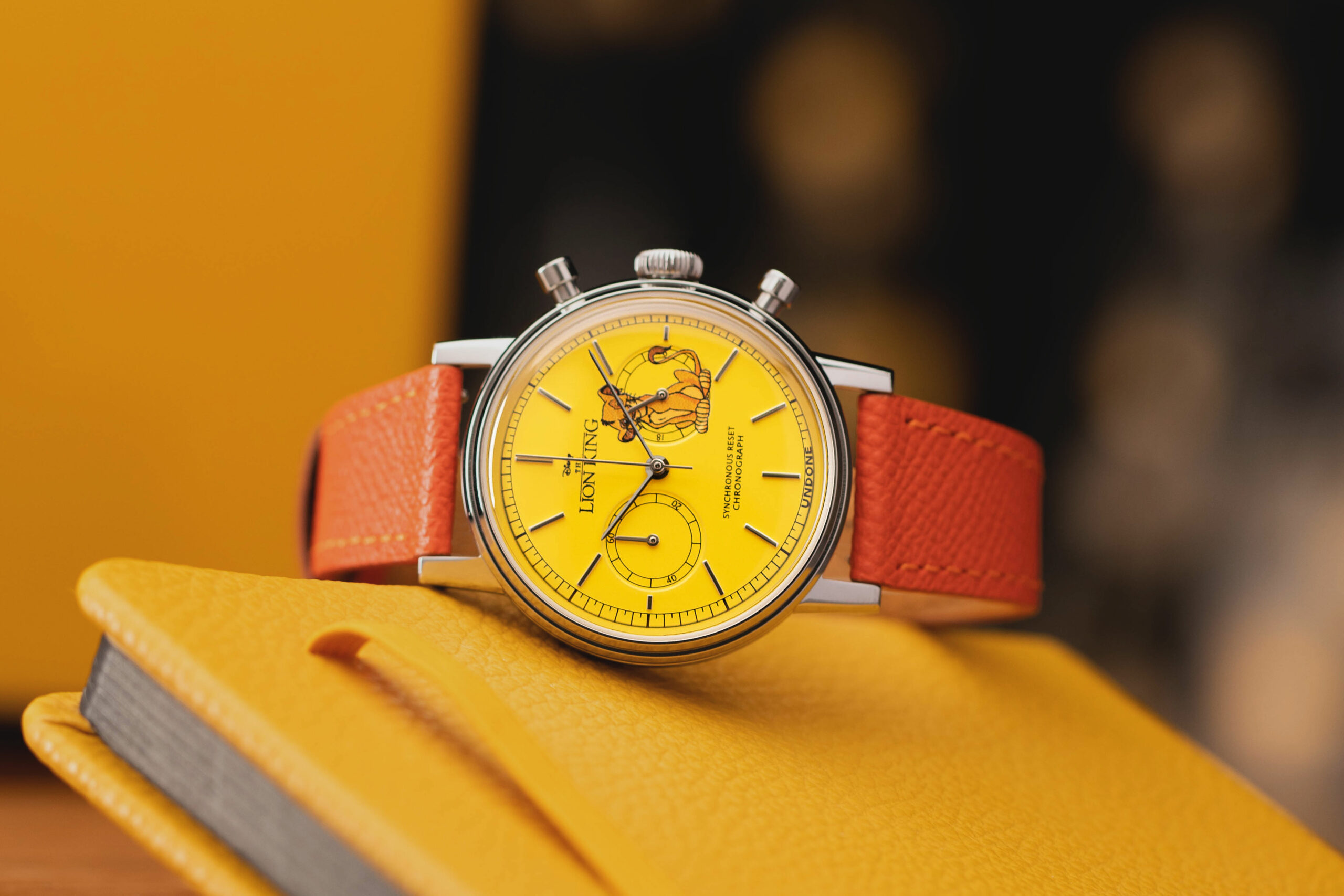 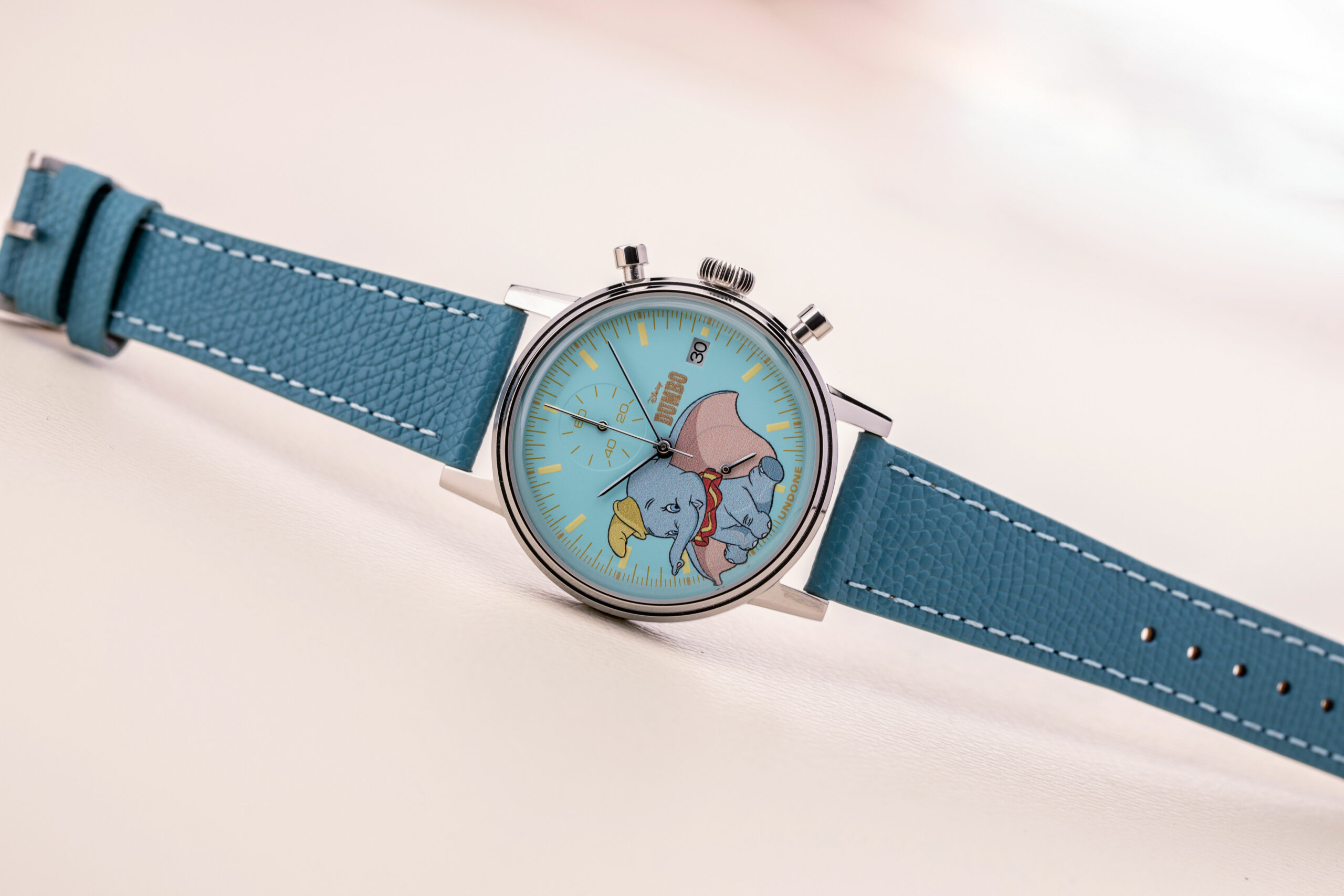 UNDONE watches, known for creating customizable watches in an affordable price range, has released a variety of quirky collaboration watches, many of which feature vibrant colors and characters implemented into the designs. The premise of the brand is a fun one — it’s a breath of fresh air in a hobby that can sometimes feel somewhat exclusive or intimidating to novices and outsiders. Starring iconic characters from the world of Disney, including Bambi, Peter Pan, Simba, and more, the new UNDONE x Disney Classics collection is full of nostalgia-inducing timepieces that should appeal to both watch collectors and Disney fanatics.

Based on UNDONE’s popular Urban Chronograph model, every watch in the Disney Classics collection features a 316L stainless steel case measuring 40mm in diameter, with the exception of the Tinker Bell, which comes in a more svelte rose PVD-plated 34mm case. The pieces are powered by a Japanese Mechanical-Quartz Hybrid Chronograph movement, which combines the superior accuracy of a quartz movement with the “feel” of a mechanical watch, thanks to its sweeping chronograph second hand and flyback reset function. Each watch features a domed composite K1 crystal. K1 is a heat-treated mineral glass that is more scratch-resistant than mineral glass and more shatter-resistant than sapphire; accordingly, it can be thought of as the improved version of mineral glass. Each of the watches in the Disney Classics collection has a water resistance of 30 meters. While the technical specifications of these pieces are impressive in their own right for a watch at this price point, the most important aspects of these watches are their charming designs and the stories they tell.

UNDONE’s “The Flying Elephant” sports a Tiffany blue dial with beige and yellow accents and a picture of everyone’s favorite cartoon elephant, Dumbo, on the bottom left corner. The dial design is striking and harmonious, with a sub-seconds counter located at 12 o’clock and a date indicator at three. 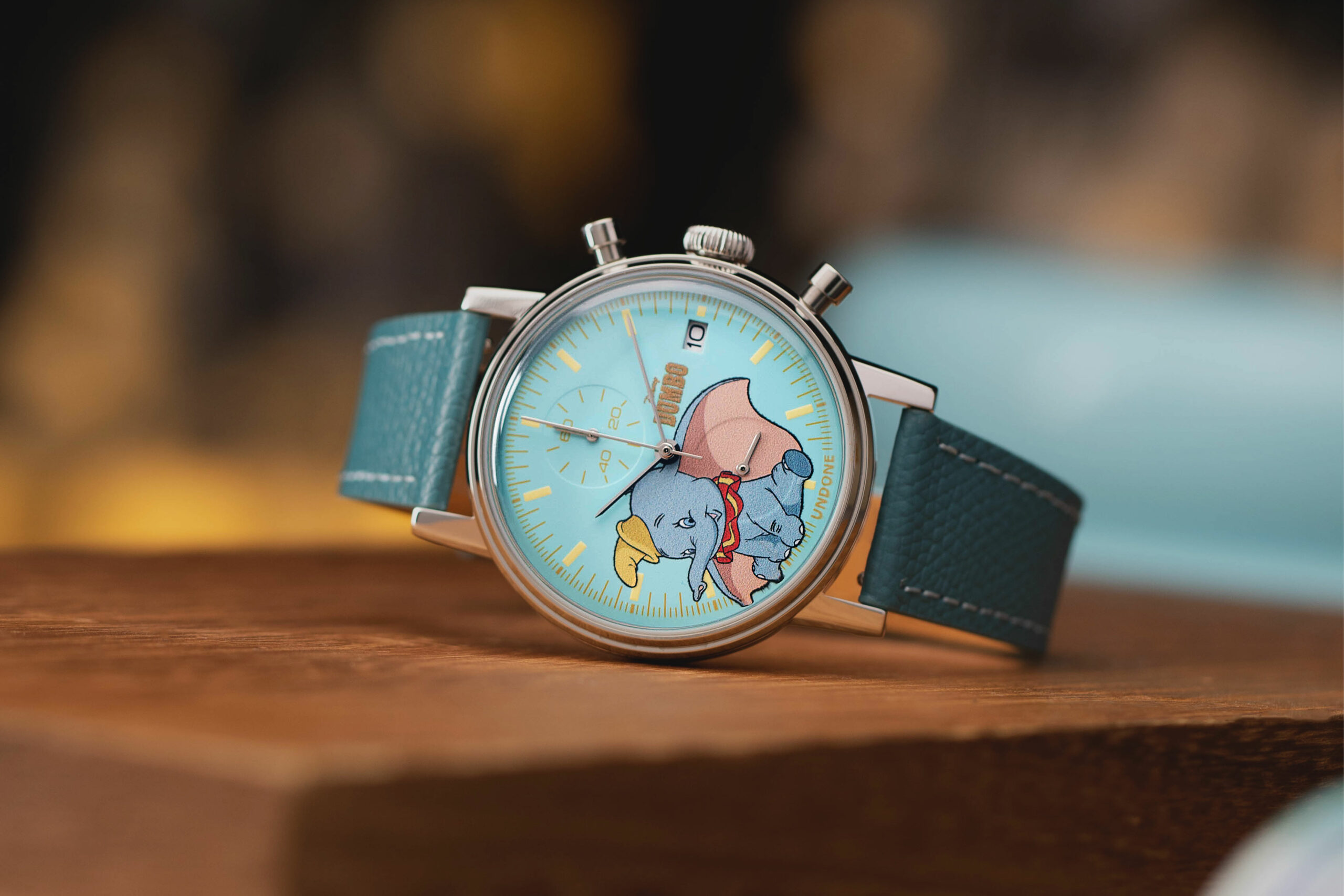 At the beginning of the film, Dumbo is bullied for his big, floppy ears. His mother, Jumbo, is thrown into solitary confinement as a result of her attempts to protect Dumbo from his bullies. The illustration on the caseback, which features Dumbo and his mentor Timothy Q. Mouse at the circus, celebrates Dumbo’s journey toward becoming a circus star, the only way to ever see his mother again. 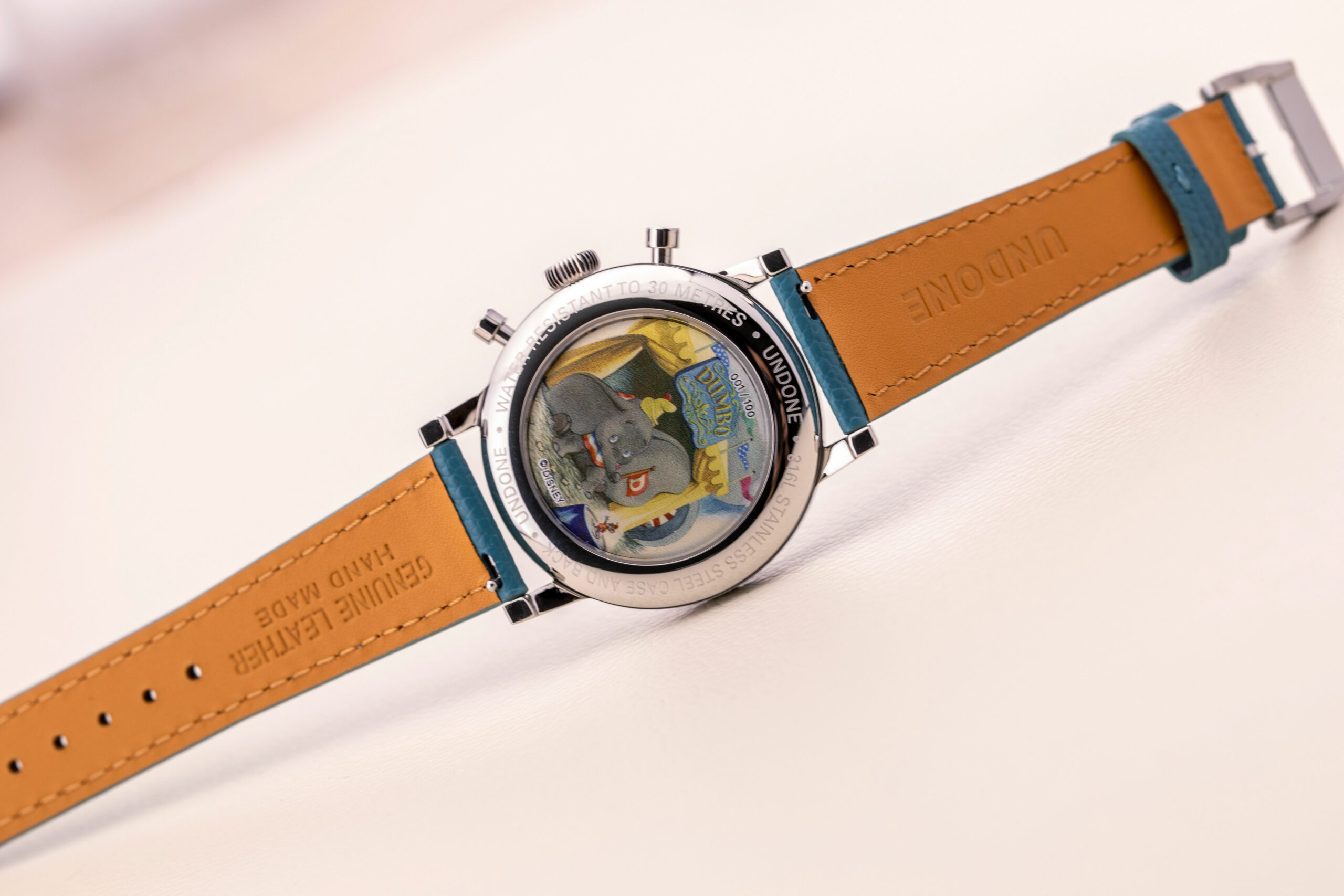 THE KING OF PRIDE LANDS

The Disney Classics “King of Pride Lands” timepiece pays homage to The Lion King, the heart-warming tale of a lion that, through heartbreak and betrayal, finds new love and friends that give him the courage to be be a king.

The dial of the “The King Of The Pride Lands” is a vibrant yellow, with a rendering of Simba as a youthful lion cub positioned over the 3 o’clock subdial. After Simba’s journey of self-discovery and his battle with his nemesis, Uncle Scar, Simba emerges victorious and takes the right to his throne with an epic walk up Pride’s Rock. This seminal moment is captured on the caseback of the watch. 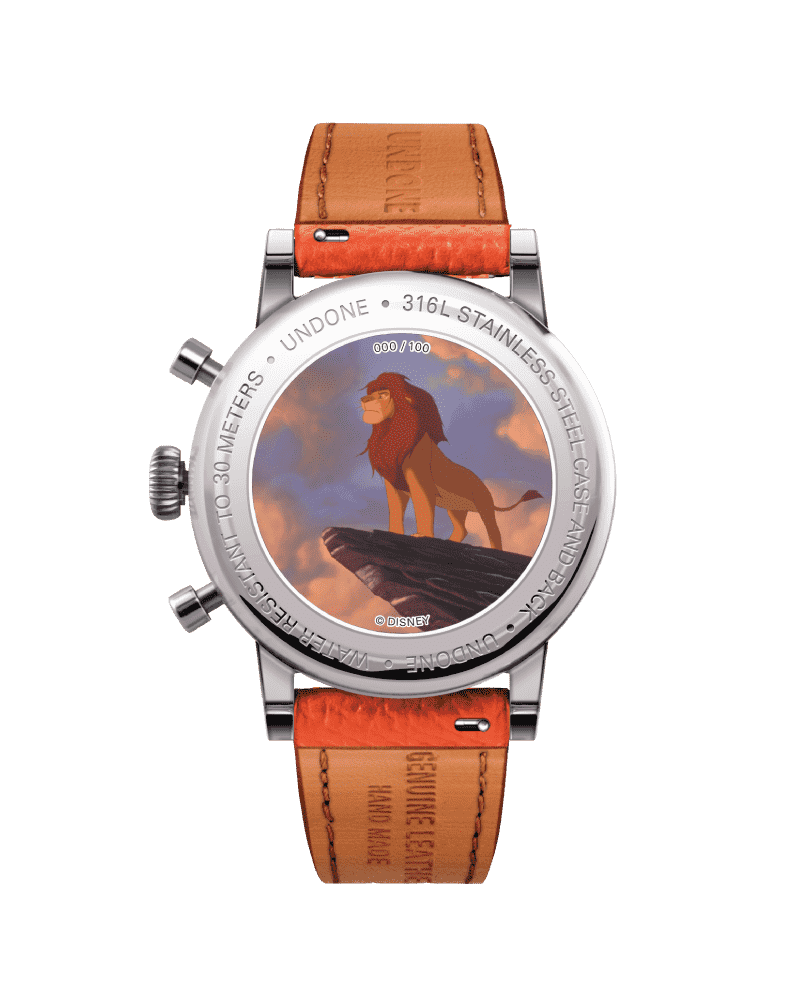 LEADER OF THE LOST BOYS

UNDONE’s “Leader Of The Lost Boys” honors the timeless and transcendent story of Peter Pan. The piece sports a monochromatic aesthetic marked by an olive-drab dial and nylon strap. The dial features a date window at 3 o’clock, the film’s logo to the left of the center pinion, and a colorful illustration of Peter Pan perched on the 6 o’clock subdial. 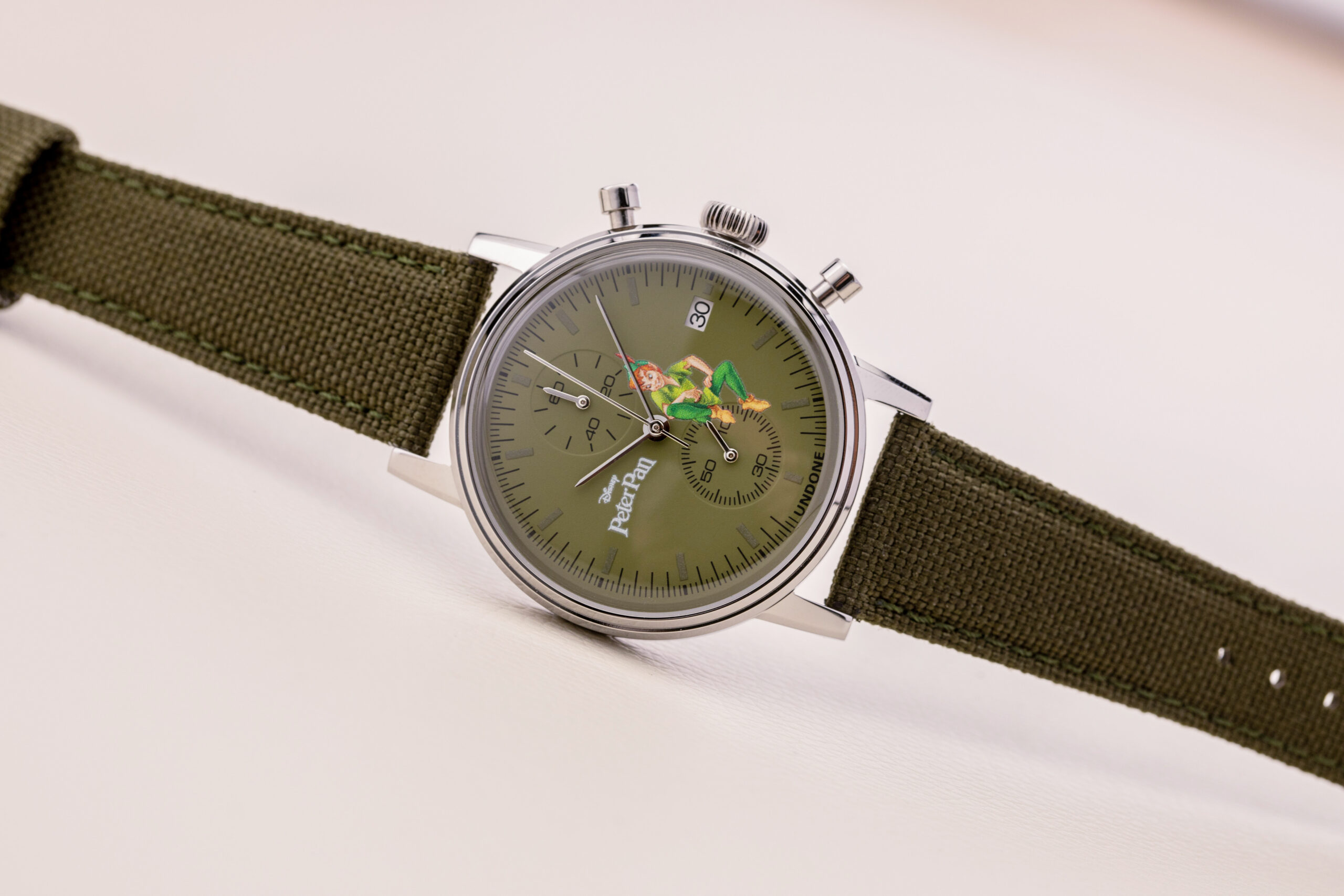 As the undisputed leader of the Lost Boys, Peter Pan can fly without wings and duel Captain Hook with nothing more than a small dagger. Time makes little difference to him; when you never grow up, life is nothing but fun, whimsy, and adventure. One of the most iconic scenes in the film – when all the children began flying around after a dose of Tinkerbell’s magical pixie dust – is illustrated on the caseback. 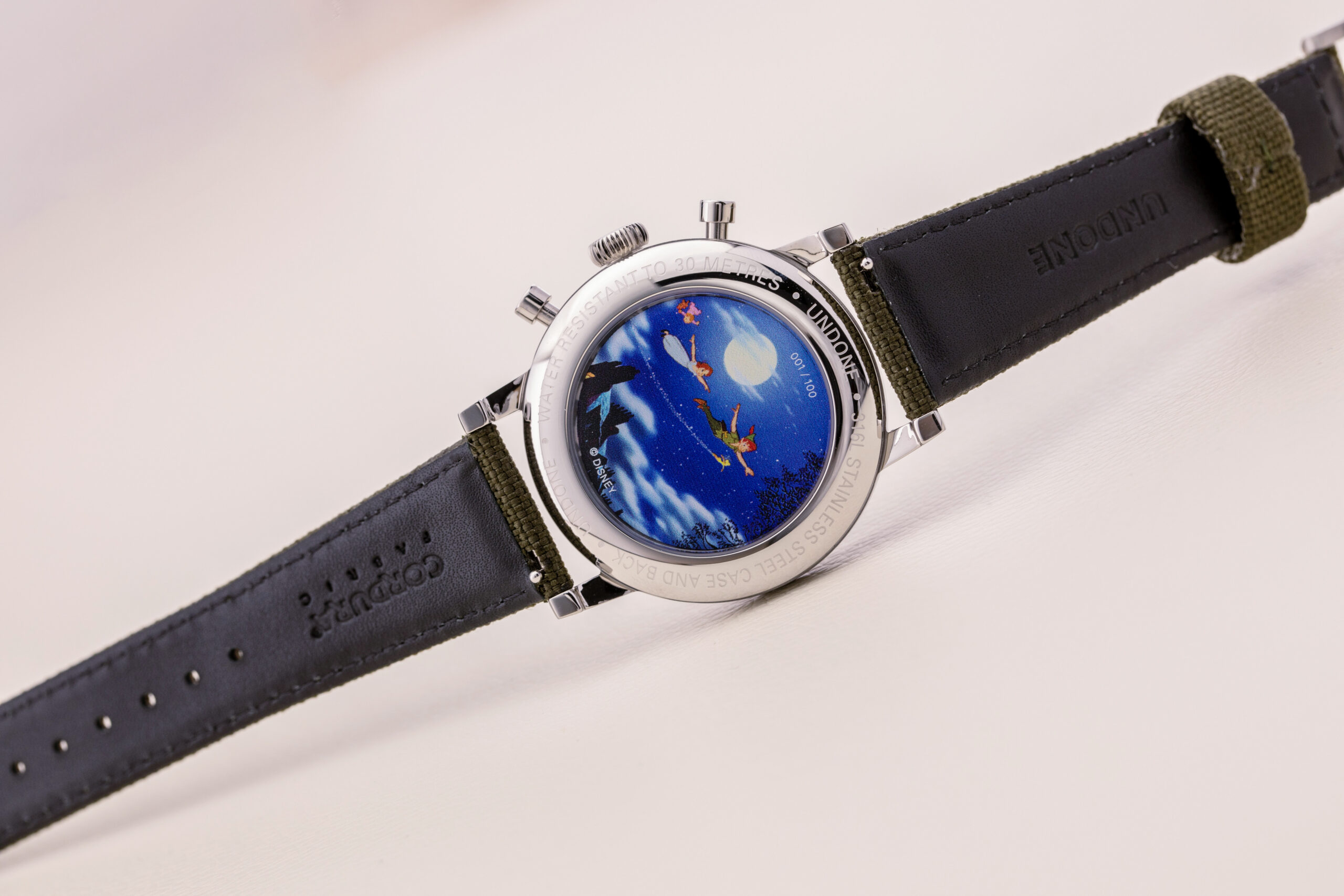 With its rose PVD-plated 34mm case and double wrap gray epsom strap, “The Magical Fairy” features a midnight blue dial aptly adorned with a sparkly finish, a star resembling Tinkerbell’s wand, at 12 o’clock, and a small yet detailed rendering of Tinkerbell at 9 o’clock.

The outspoken fairy who serves as Peter Pan’s sidekick, Tink often joins Peter on his adventures throughout Neverland. Tinker Bell’s magical Pixie Dust grants herself and others the ability to fly, as long as they think happy thoughts. The caseback features an illustration of Tink, her trail of pixie dust, and one of her most famous quotes: “Leave a little sparkle wherever you go.” 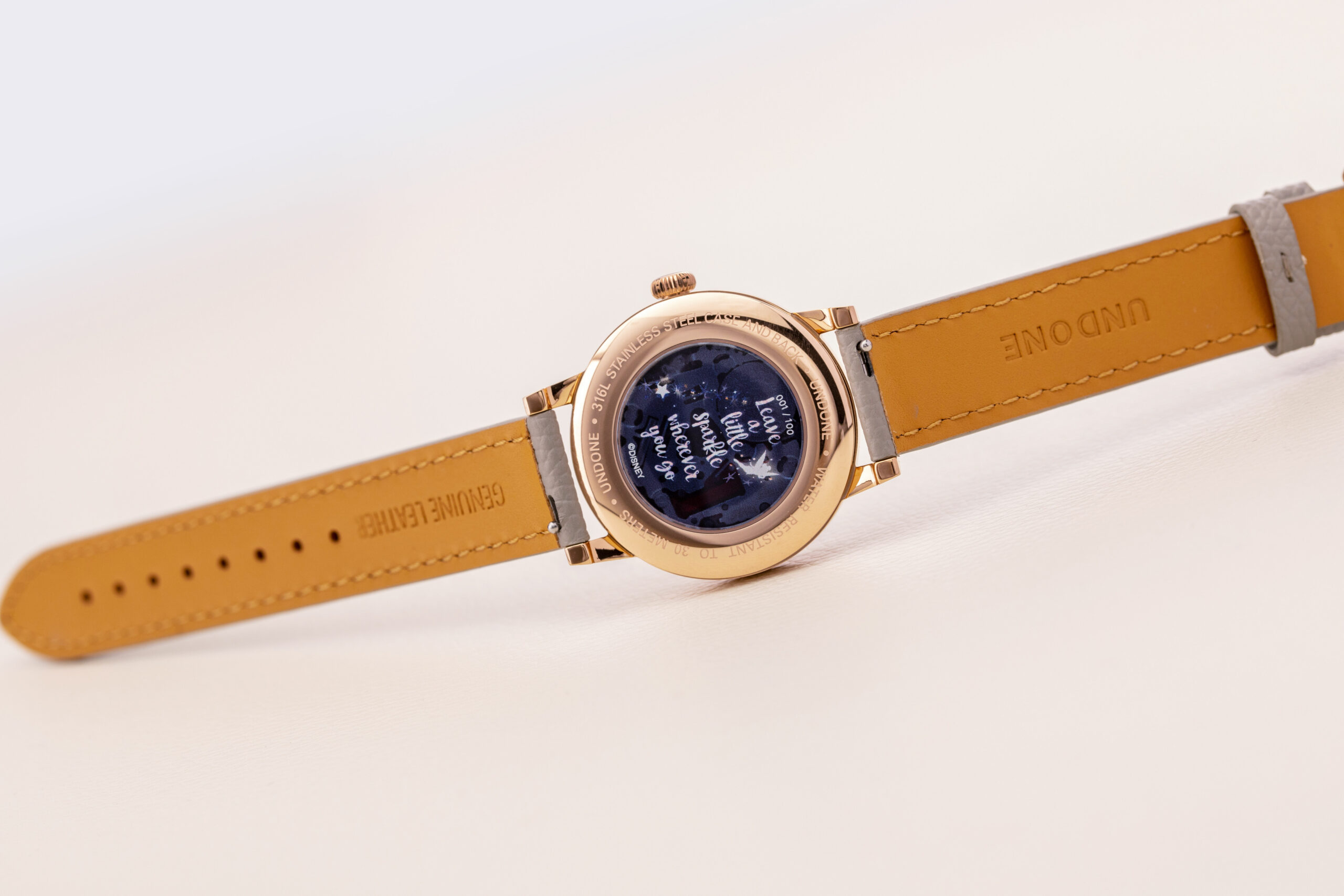 Using The Adventures of Pinocchio as its inspiration, UNDONE’s “The Puppet Boy” features a navy blue dial with a vibrant depiction of Pinocchio positioned in the bottom left corner, the film’s iconic logo to the right of the center pinion, and a date window at 3 o’clock. 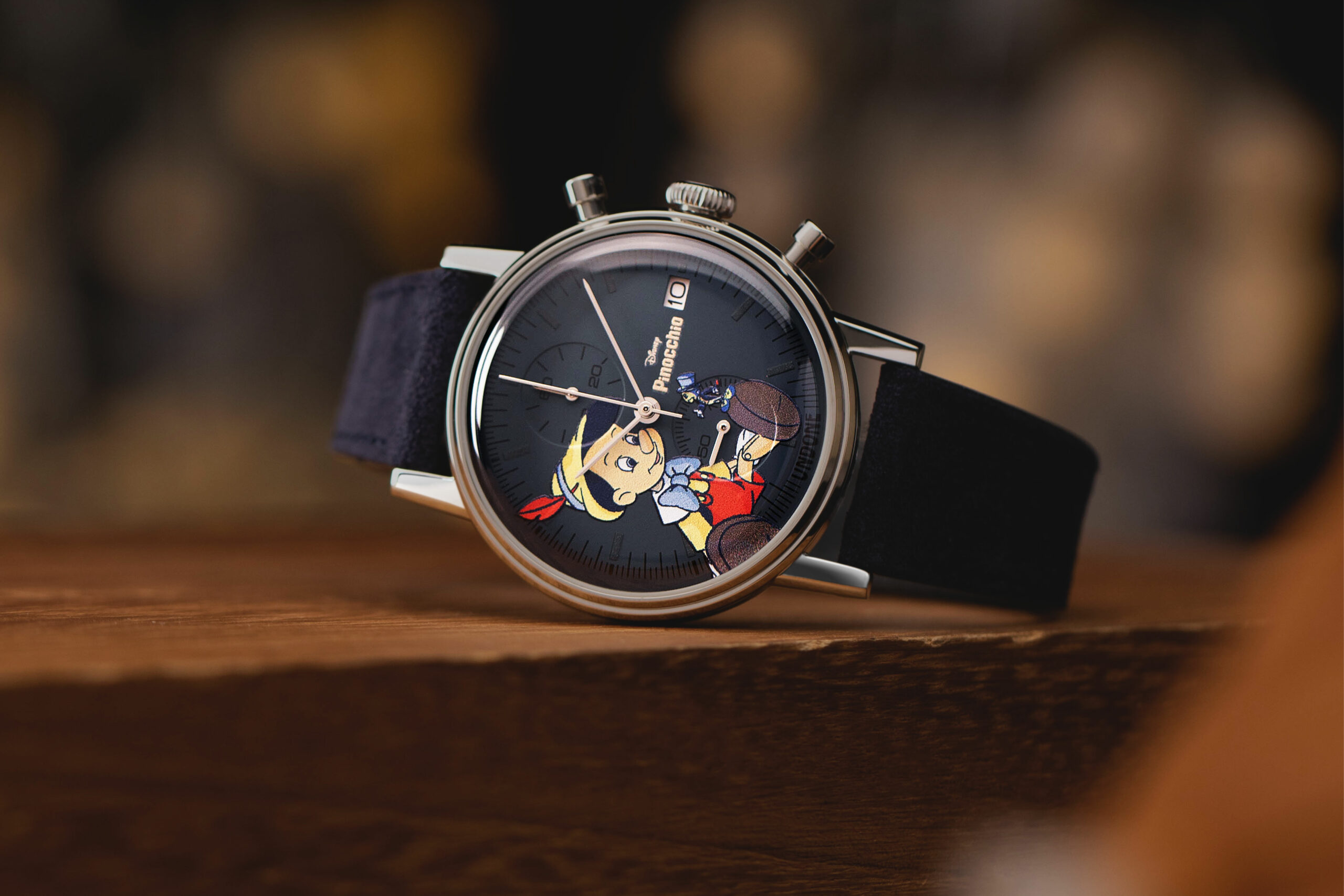 As the puppet Pinocchio tries to become a real boy, he faces many dangerous characters and situations. His friend and conscience Jiminy Cricket is there to help him along the way. The caseback of “The Puppet Boy” shows an illustration of Pinocchio waking up from his wooden state and meeting Jiminy for the very first time. 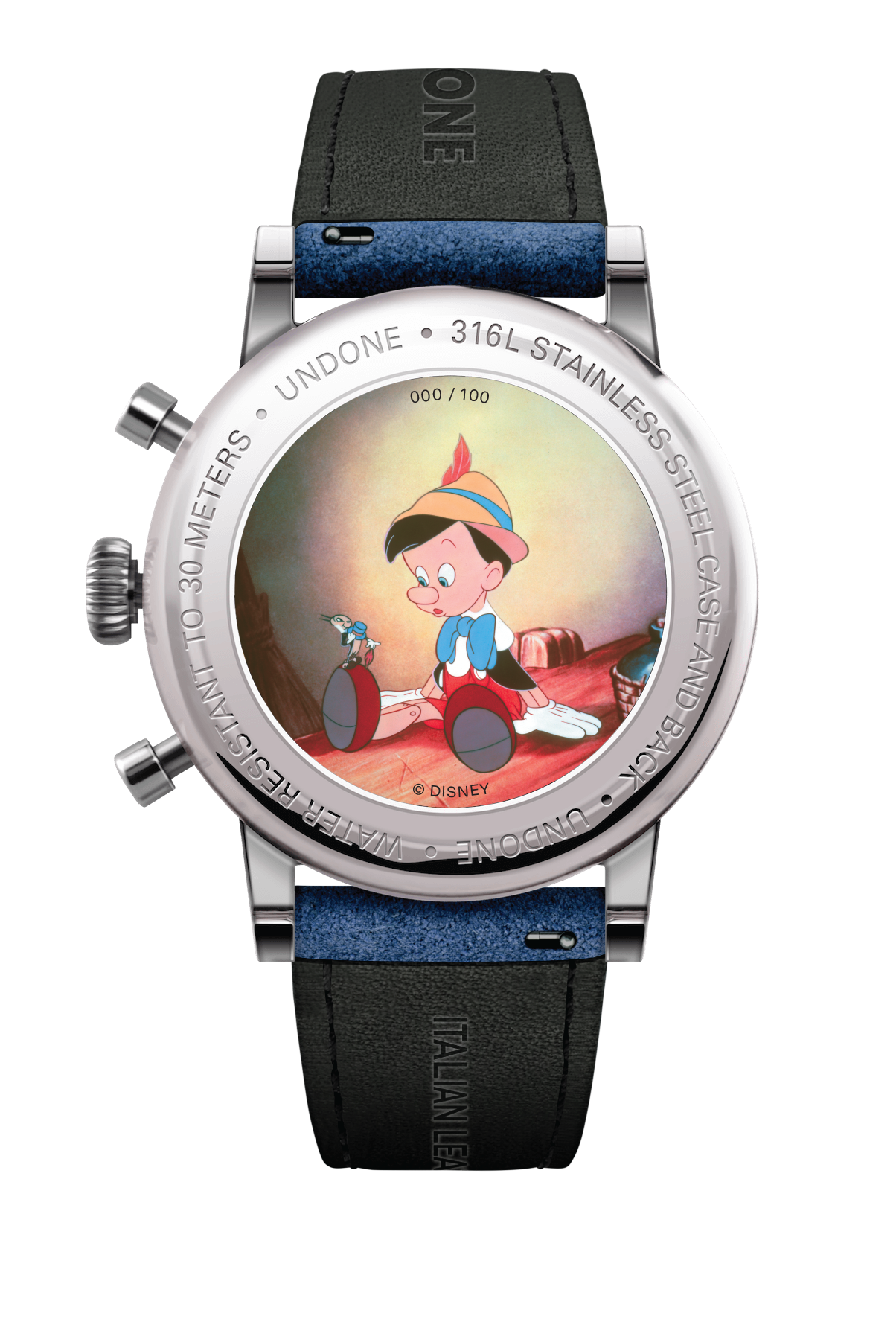 PRINCE OF THE FOREST

Celebrating the story of the cute little forest deer that grows up in front of our eyes, the UNDONE “Prince Of The Forest” features a stark white dial featuring a rendering of Bambi that aptly captures his wide-eyed, youthful persona. Joining him on the dial is his best friend, Thumper the rabbit, who helps him guard and ensure the safety of the forest in the film. Depicted on the caseback is the moment Bambi is born and all the creatures of the forest come to offer their blessings. 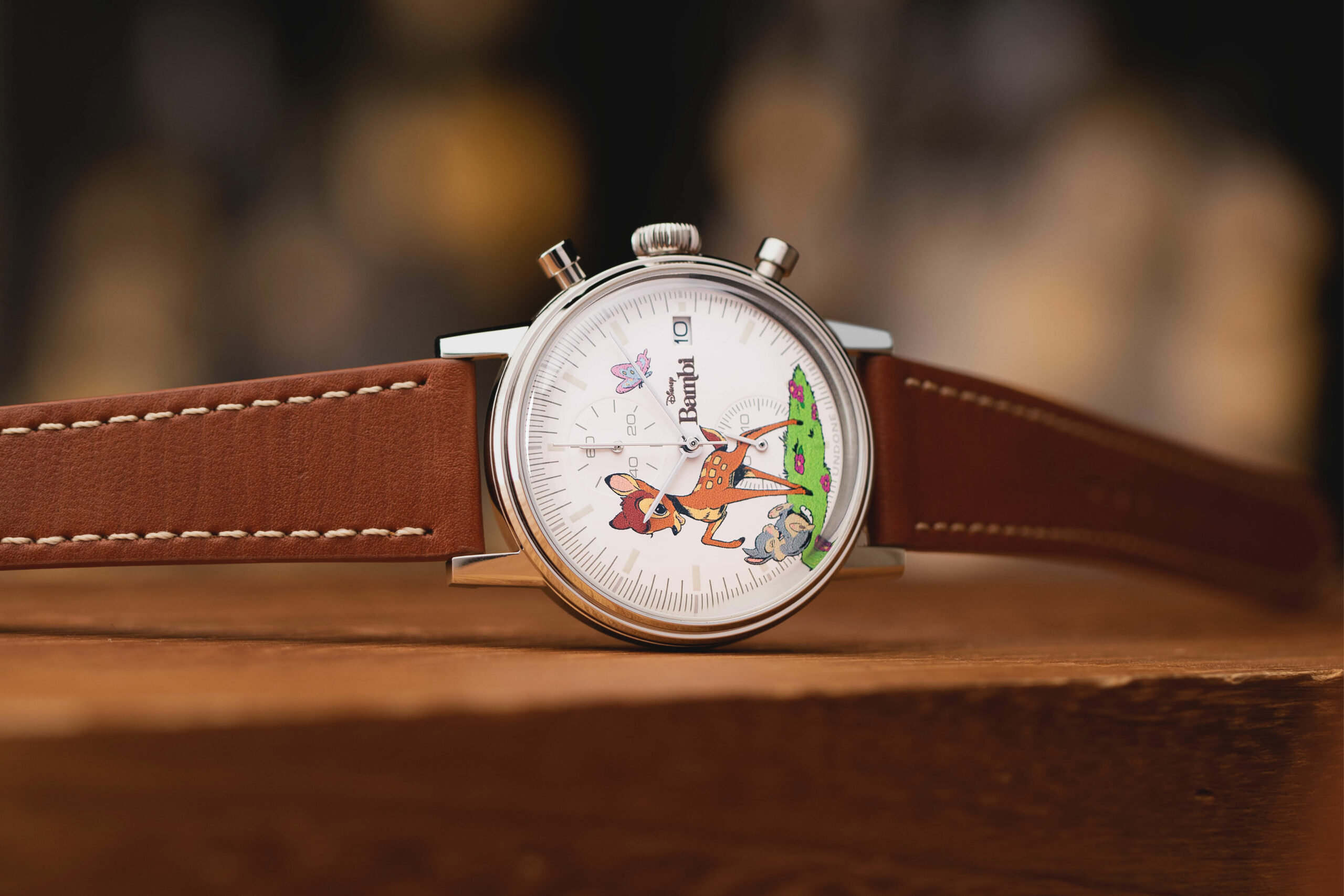 UNDONE’s latest collaboration with Disney – the Disney Classics Collection – will no doubt appeal to Disney aficionados and watch enthusiasts, alike. Each individual reference is produced as a limited edition of just 100 pieces and is priced at an approachable $349 USD. These nostalgia-inducing timepieces are available for order on the UNDONE website.