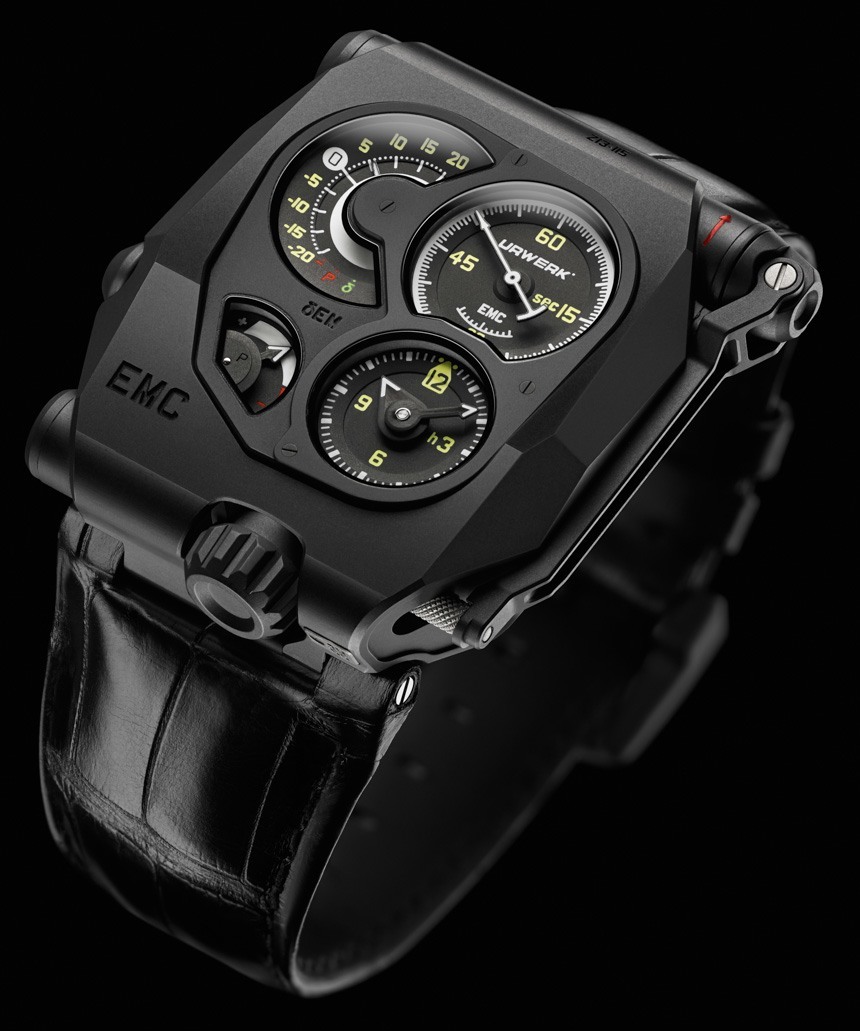 It was only a few months ago that we went hands-on with Urwerk‘s amazing EMC watch and discovered its unique electro-mechanical venture into horology. Now, the brand has announced a new PVD coated version of the Urwerk EMC, dressing up this beast of a watch in a stealthy, matte black color. Now, where the Urwerk EMC watch stood out was that it mixed mechanical timekeeping with a digital accuracy checking device that would allow the wearer of the watch to check the accuracy of the watch at any given moment, without having to connect the timepiece to an external machine or any other apparatus. It was called the “Electro Mechanic Control,” and it certainly remains the key feature of the Urwerk EMC Black. 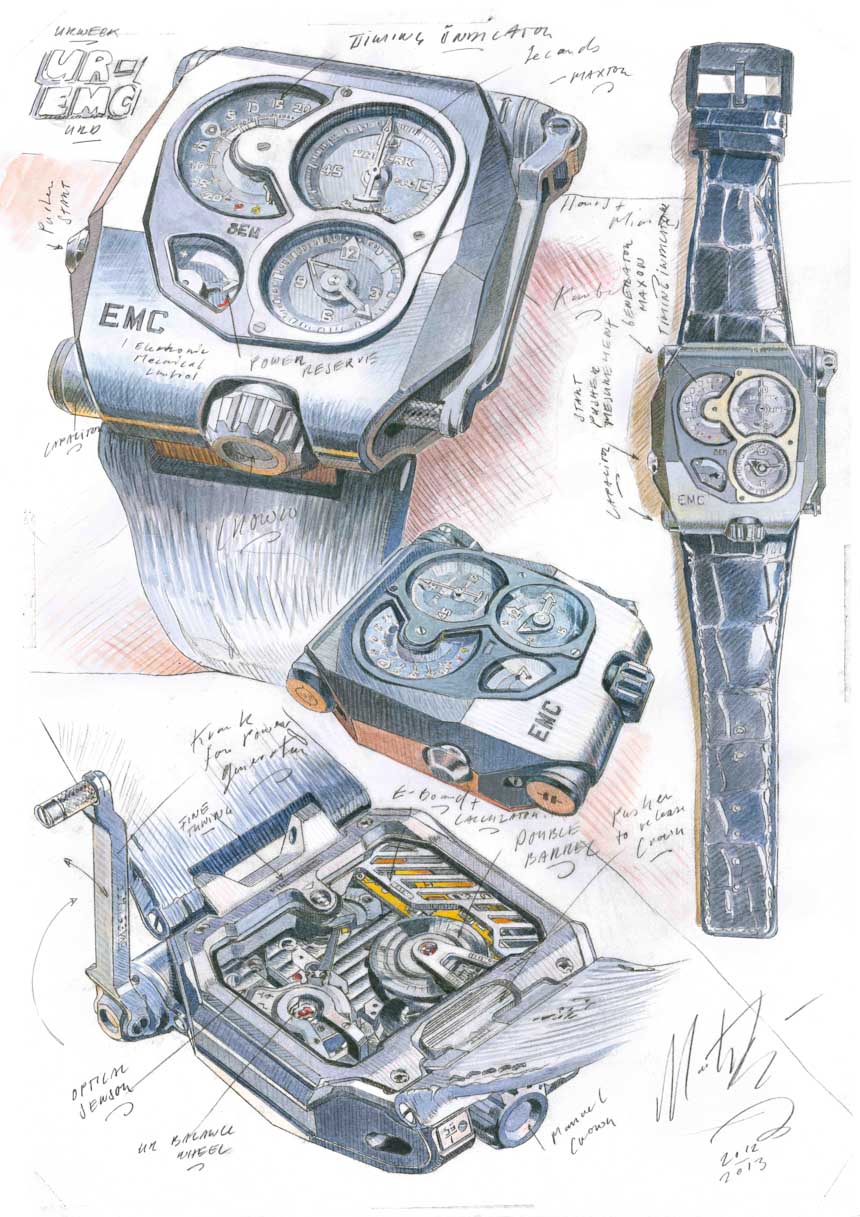 That sounds complicated enough, and despite the hugely impressive achievements in miniaturization, the UR-EMC movement still requires substantial space. You see, while the so-called large watch trend of late certainly brought along the – oftentimes rightful – criticisms of watch enthusiasts, it should not be forgotten that it was also this trend that quite literally provided watch designers and engineers with the necessary room and space to finally be able to realize some of their wildest dreams. From multiple-axis tourbillons, constant escapements and previously unimaginable ways of displaying time, we have seen a renaissance in experimental watchmaking. And if there ever was a brand to fully harness the possibilities of this very-21st century trend, it was Urwerk Geneve.

With that said, the 80-hour power reserve mechanical movement, the rate measurement system, and the rate adjust feature all require plenty of space and, having worn the Urwerk EMC myself, I can tell you that despite the remarkable technology it comprises, it still is a chunky watch indeed. It measures 43 millimeters wide, 51 millimeters tall and 15.8 millimeters thick, and while that is more or less in line with some of the more generously sized watches we have seen from other brands, the Urwerk EMC just wears and looks big. 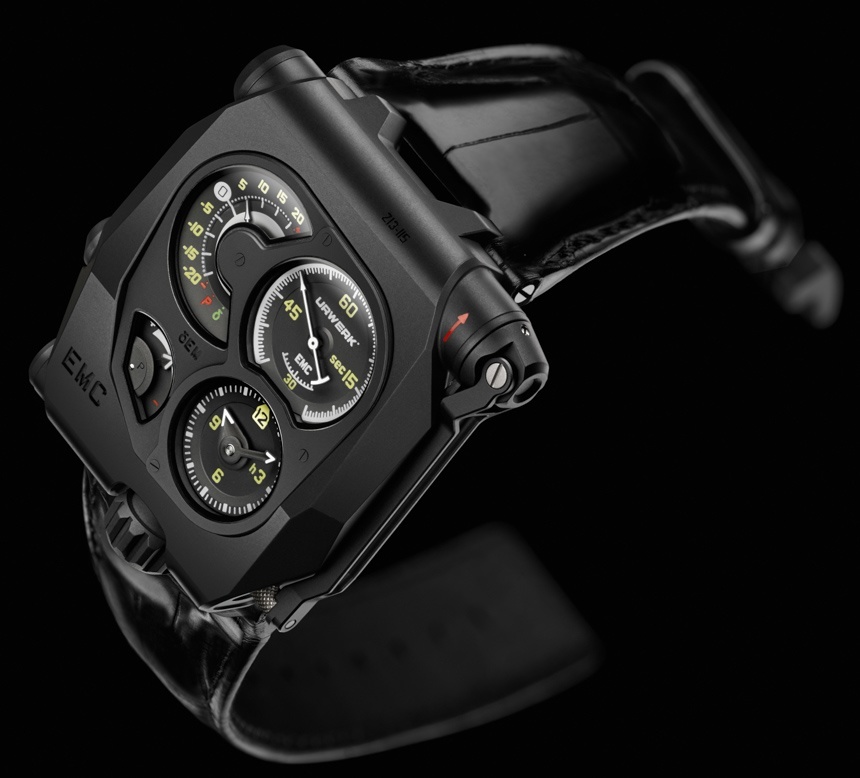 But worry not, as this is where the new Urwerk EMC Black’s DLC coated, “shot-blasted,” satin finished titanium and steel case comes into play: its super cool matte black looks conceal the hefty proportions of the angular, instrumental case design and make the four subdials and their bright yellow and white texts pop even more. It even makes the otherwise rather ostentations winding crank blend into the case – situated on the right hand side of the case, it is this skeletonized stem that is used to power up the “electronic optical measuring device” that is used to determine the rate of the watch. 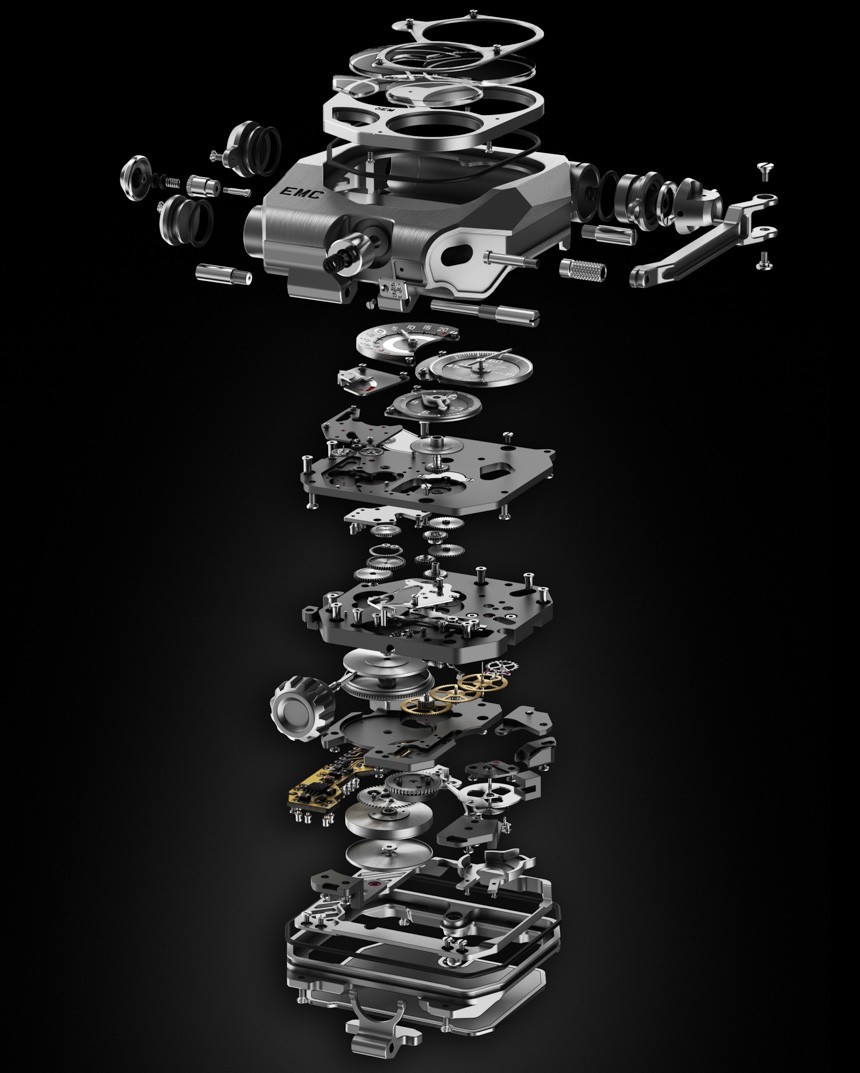 Despite lacking just about any more traditional complications – such as a date, chronograph, or others – the EMC packs an extremely complicated movement into a comparably complex case design. As the exploded view of the Urwerk EMC watch illustrates above, this result of about 6 years of research and development is what we could call a different kind of grand complication.

And with that, we must note that brands that go to such lengths to develop a new product will always try to amortize the stratospheric development costs by releasing basically the same movement in different, new packaging: hence, after the first 55 pieces run of the original EMC is just about to be completed, the Urwerk EMC Black continues this electro-mechanical legacy of the brand. Price for one of the 55 numbered pieces of the Urwerk EMC Black watch is 118,000 Swiss Francs or about $126,000. urwerk.com