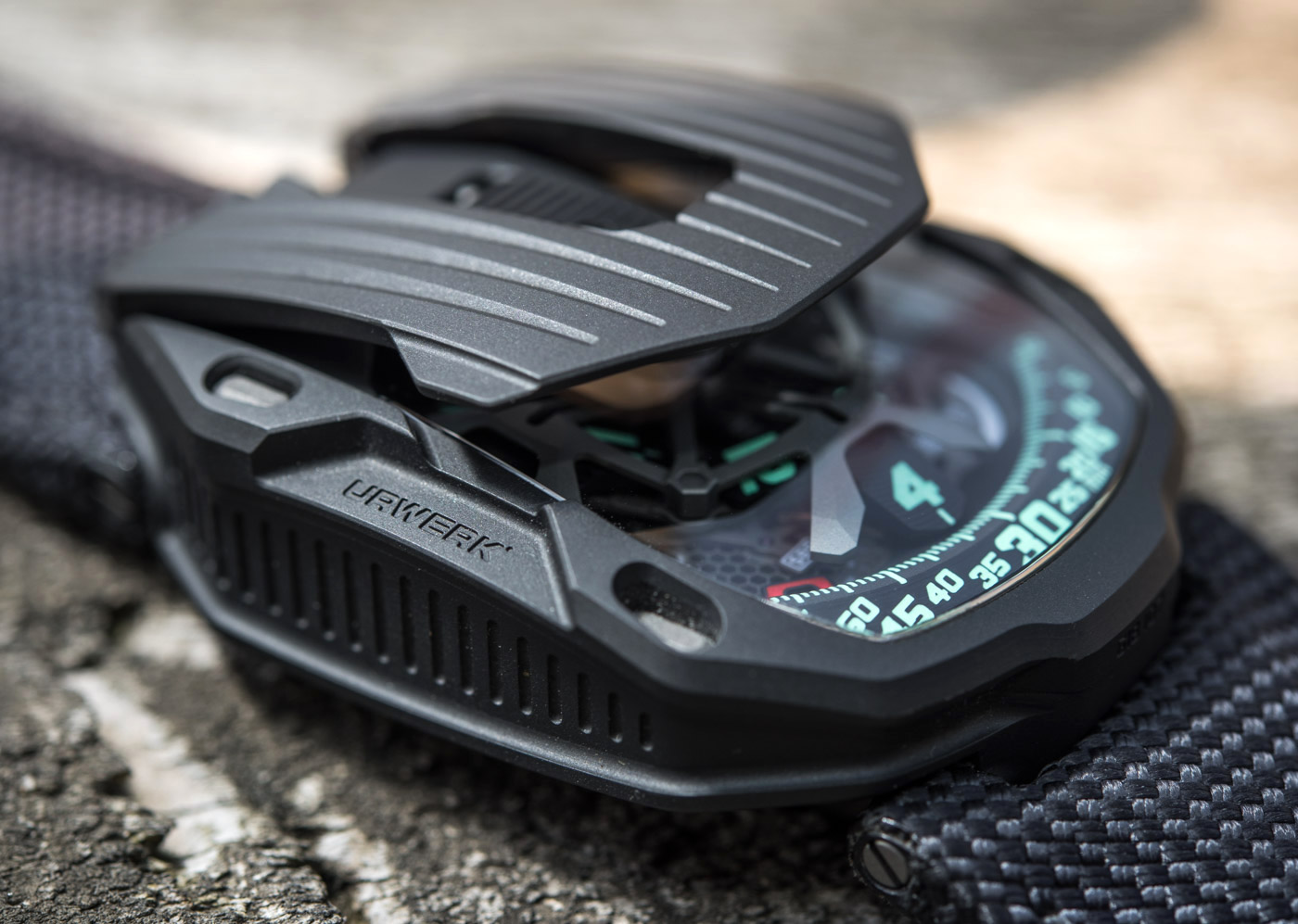 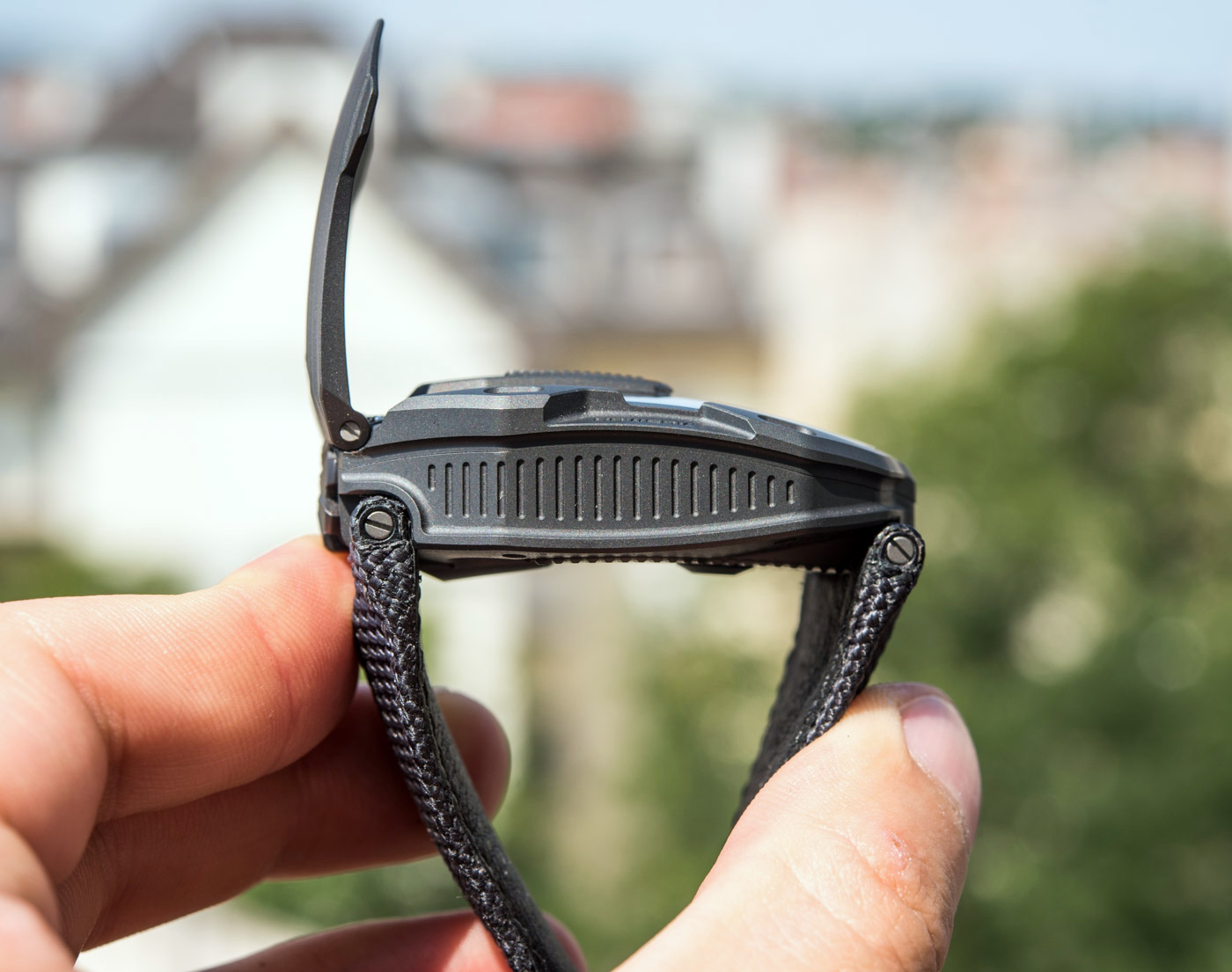 To clarify, I’m not talking about liking or disliking the brand or the design, or the Superman-fanboy-enticing name… just simply the appreciation and an eye for the extremely high level of quality exhibited by every exterior component on this watch. Because whether you dislike any given brand or specific watch, you should always be able to set your taste-differences aside and appreciate a watch that is extremely well-made. Mock a watch for its design, pricing or concept – or all three – but fail to recognize a well-made watch and the only thing you ridicule is yourself. 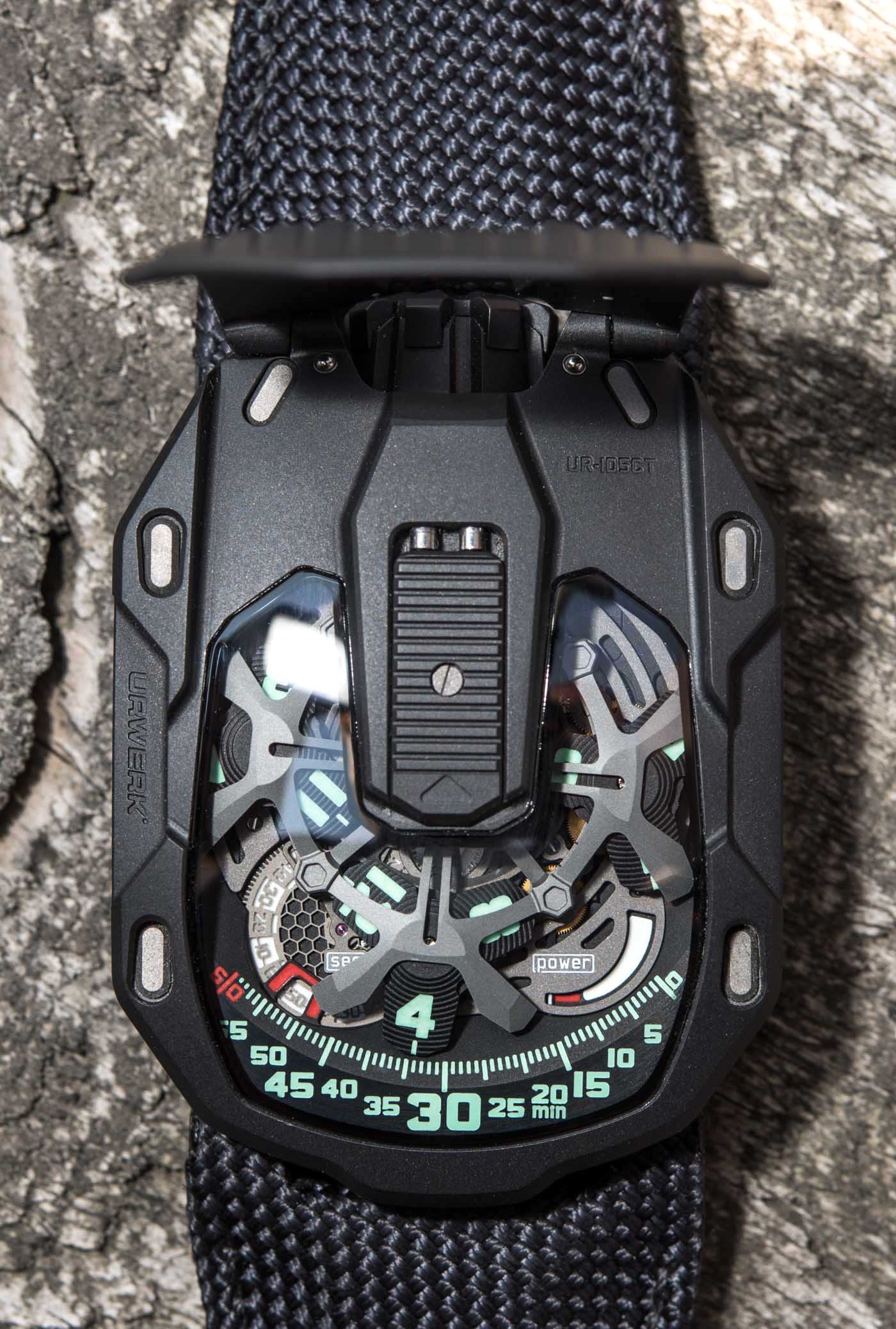 There’s no way around it: the Urwerk UR-105 CT Kryptonite is extremely well made. Everything is crafted from a solid block of something – nothing feels flimsy, cheap, stamped, or a result of some other sort of cost- and corner-cutting. Wearing a watch with a solid titanium hood is fun, and that’s even more true when it’s paired with such a fantastically clicky button – because yeah, even on a 65k CHF watch, sometimes you’ll find the most ordinary things to be the most fun to use… Partly because the general rules of Urwerk apply to every detail, including this one: that one darn button feels so over-engineered, it’s no wonder it’s an absolute treat for anyone who likes this sort of stuff. Whether or not you’re down to dedicating this sort of money to treating yourself with over-engineered clickyness is another question, but I am sure happy some people out there are fine with that. 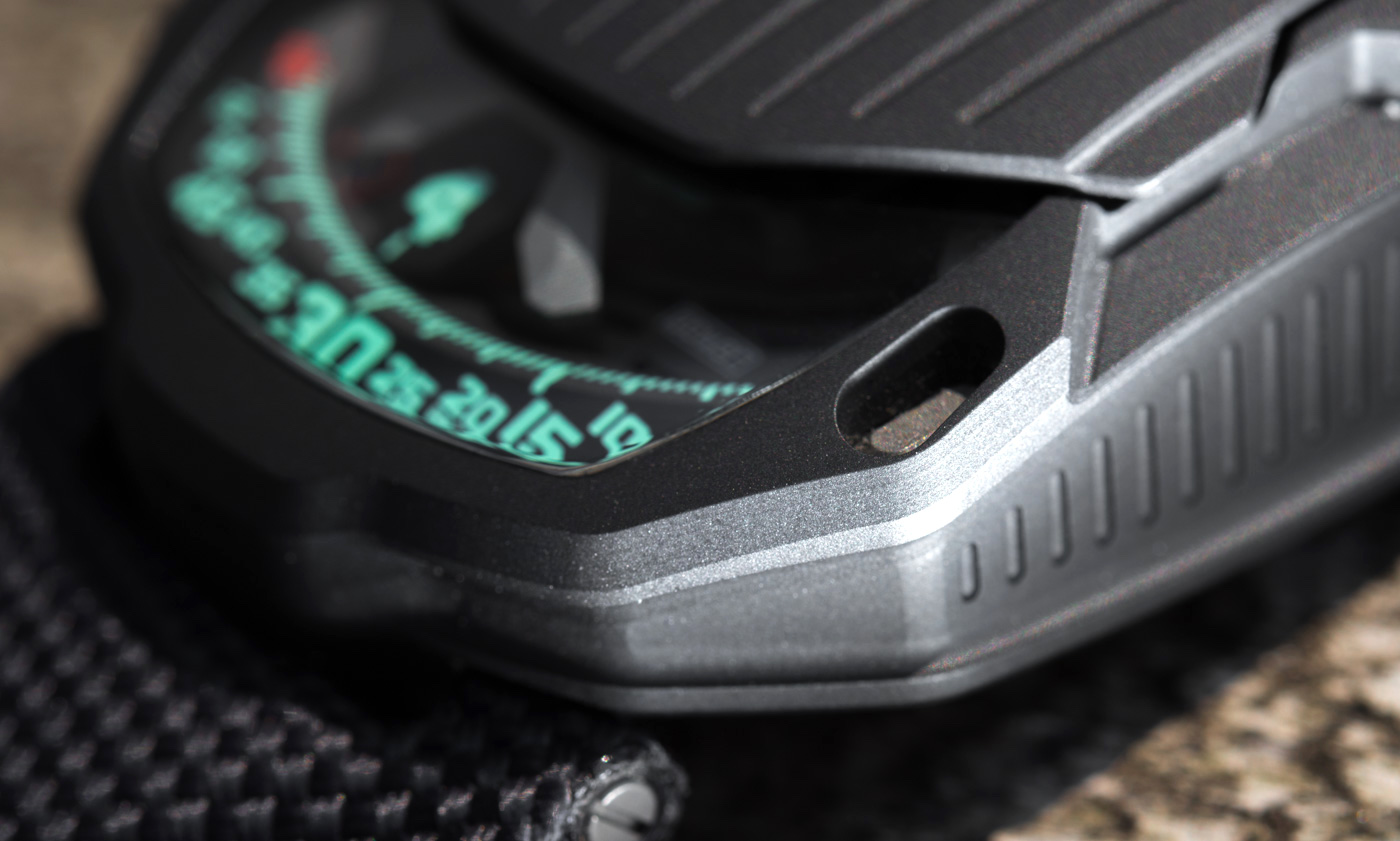 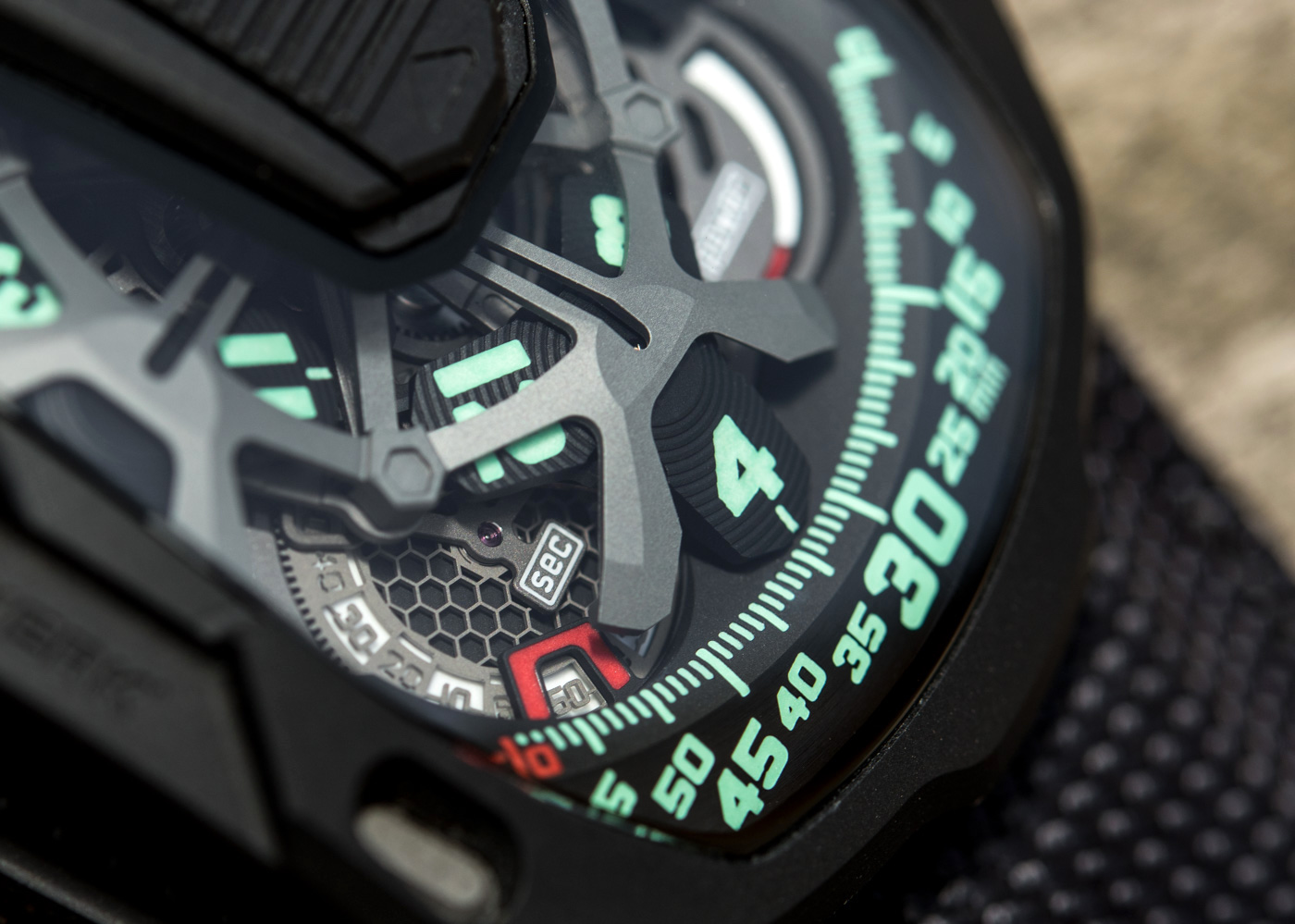 The dial itself, once fully revealed by the opening of the front hood, is another exhibition of outstanding attention to detail. The PolyEtherEthercetone (PEEK) satellite system stands out first, with its large, alien spaceship-like top bridge – it’s like a prop from Independence Day or Arrival. Underneath every arm is a three-armed platform that carries, you guessed it, three numerals. The numerals are all lumed so thick and bright that it will satisfy even the most hardcore and seen-it-all lume nerds among us. The alien upper bridge rotates and with it so do the three armed platforms, always neatly delivering the succeeding hour index just at the time when the previous one leaves the 0-60 minute arch. 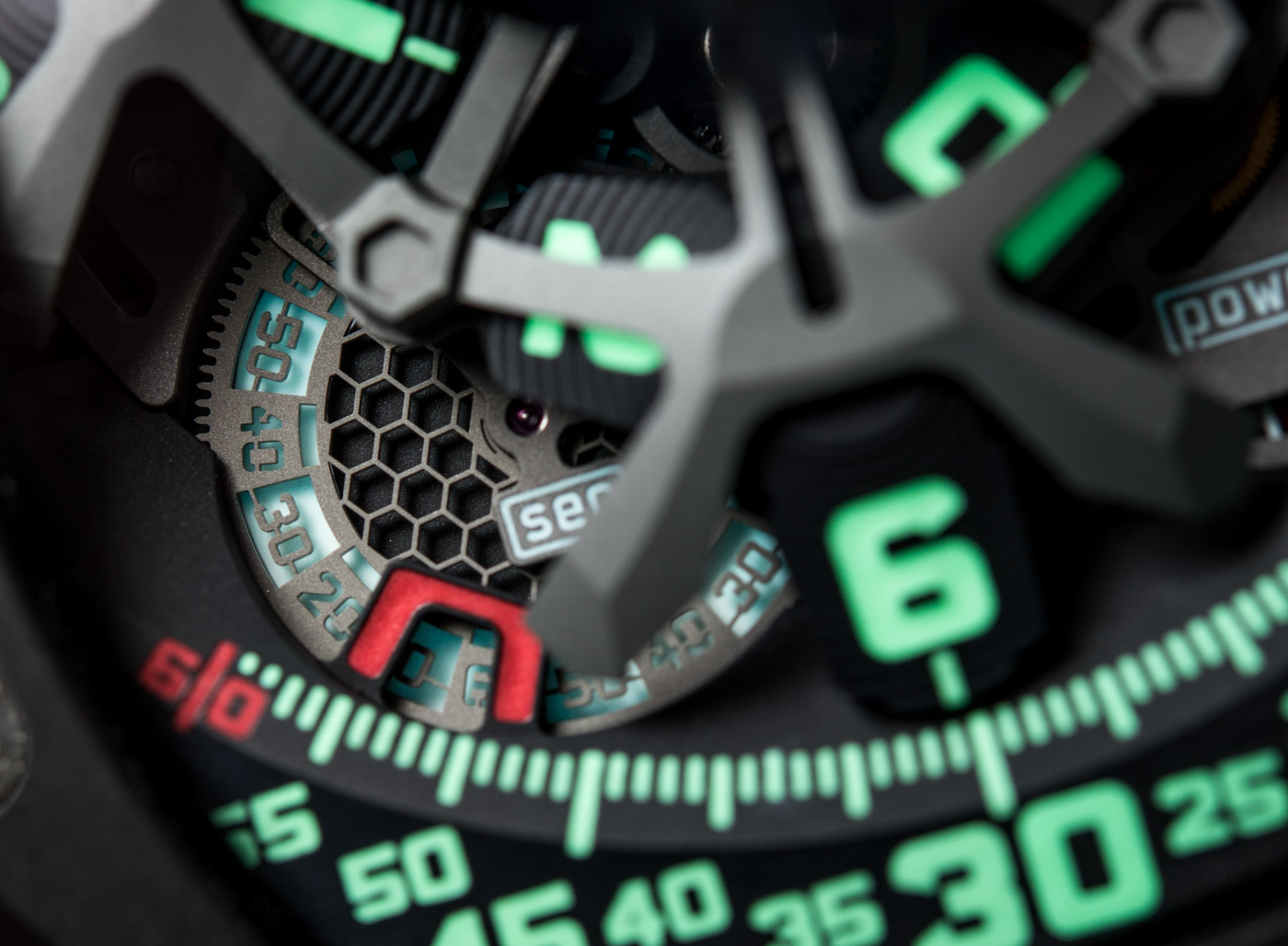 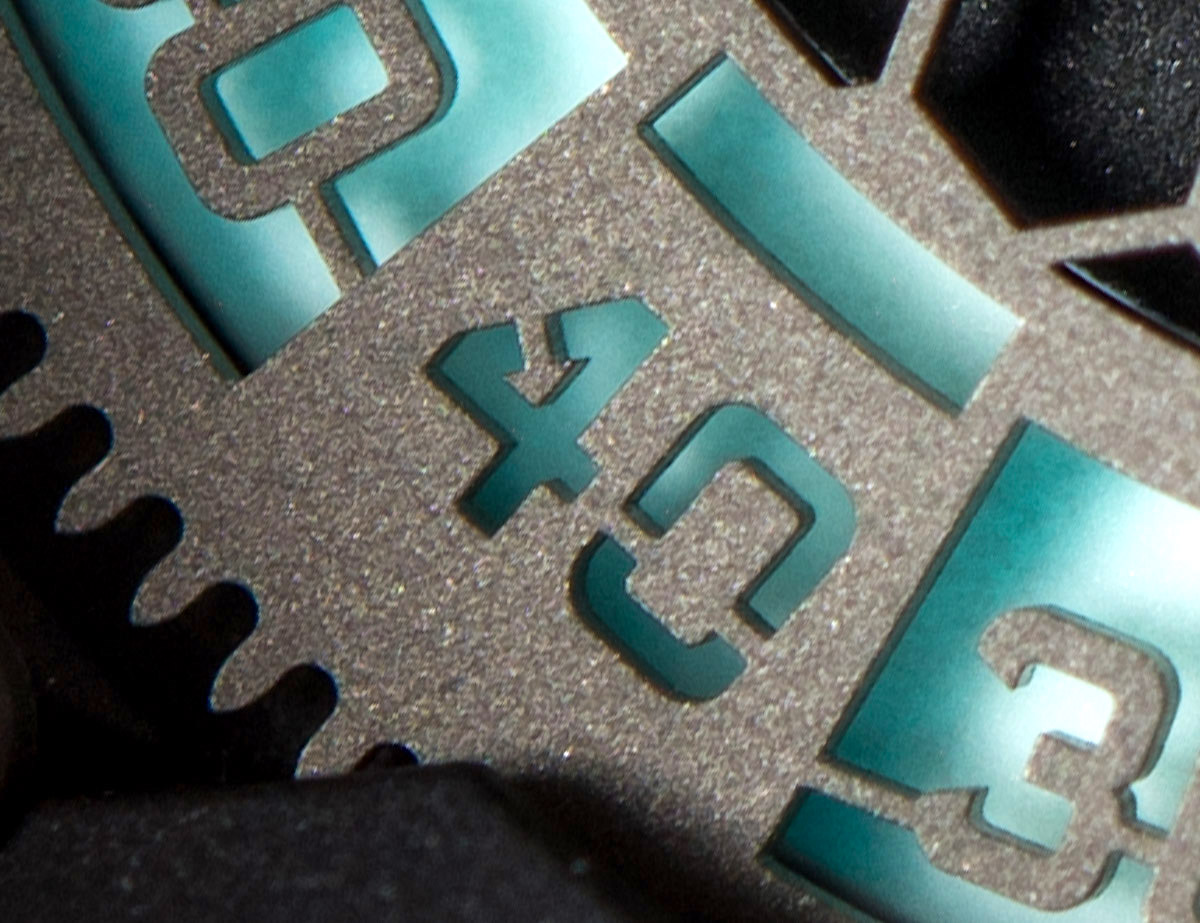 Then one tier below all that is the running seconds disc, cut out from a single plate of metal. The hexagonal pattern in the center and the alternating checkerboard way of displaying numerals are just the beginning of things because then you realize, that the number 4s, as well as the end of the 5s have a little arrow cut into them. The only issue is that one cannot possibly imagine how incredibly tiny these details are – and to work them onto a metal wheel thinner than a sheet of paper and then assemble it all into a watch… well, that’s part of where your 65 large ones are going. Unfortunately (?), actual legibility of this running seconds display is very poor with the lid open or closed. It’s just impossible to tell what the exact indication is. The numerals are so deep into the dial space and are so small and hard to read – even telling whether or not the wheel is moving takes a strong look. Running seconds, therefore, is there if you need it, but it’s best that you don’t. It’s more of a feature and an aesthetic balance, than a meaningful functionality – and that’s all good. 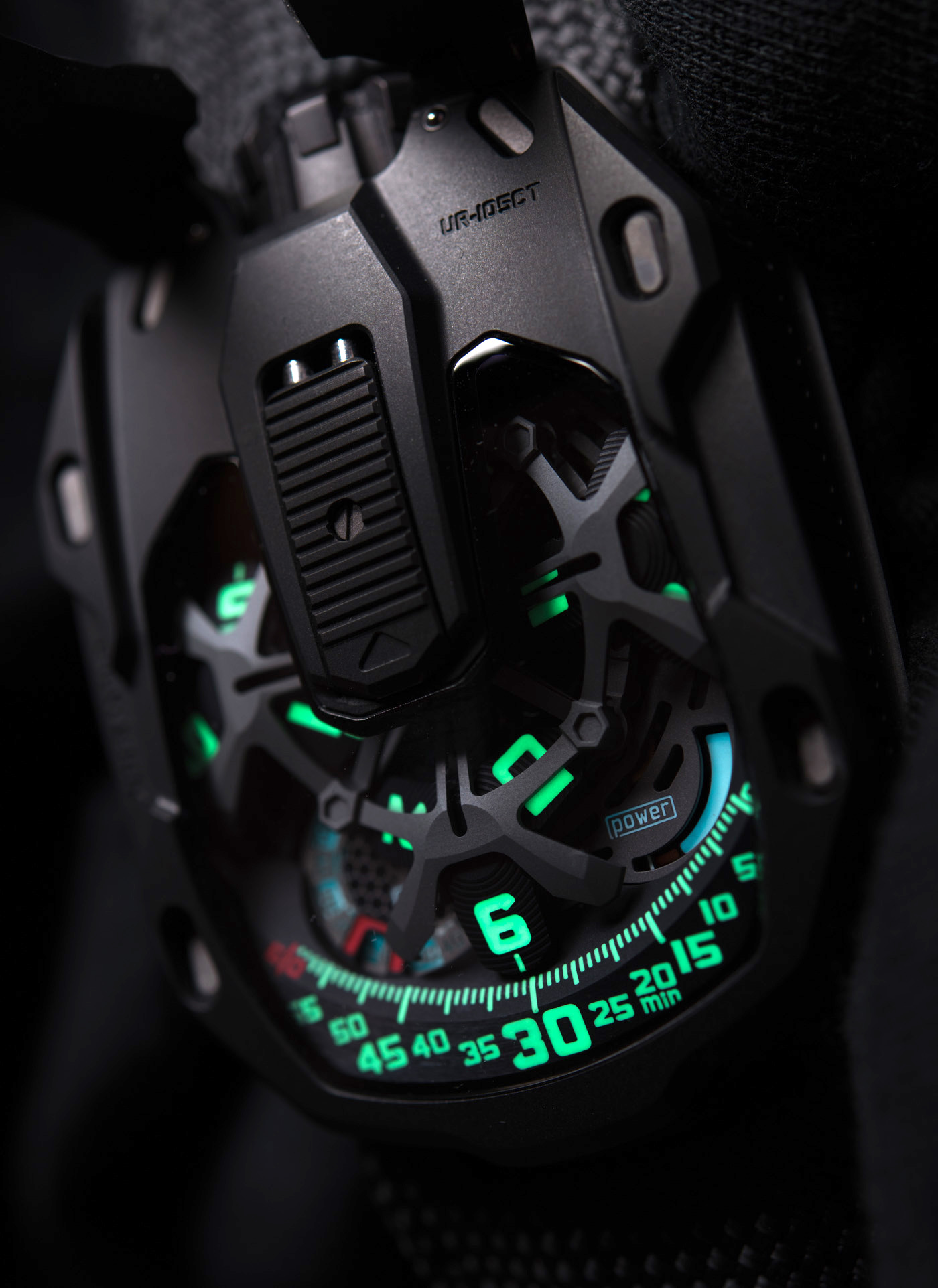 The lume is outstanding on the Urwerk UR-105 CT Kryptonite. Just look at the image above and you’ll see all the lumed bits – it’s easier than me giving you a full list of them. One detail however that I’d like to highlight (see what I did there?) is the “power” text next to the power reserve indicator where you’d normally look for the 4 o’clock index on other, not quite so otherworldly watches. Because yes, even the text and its frame are lumed, in case you were posing on top of a block of flats somewhere in the Manhattan night and you suddenly thought you needed to check how much juice is left in your UR-105. 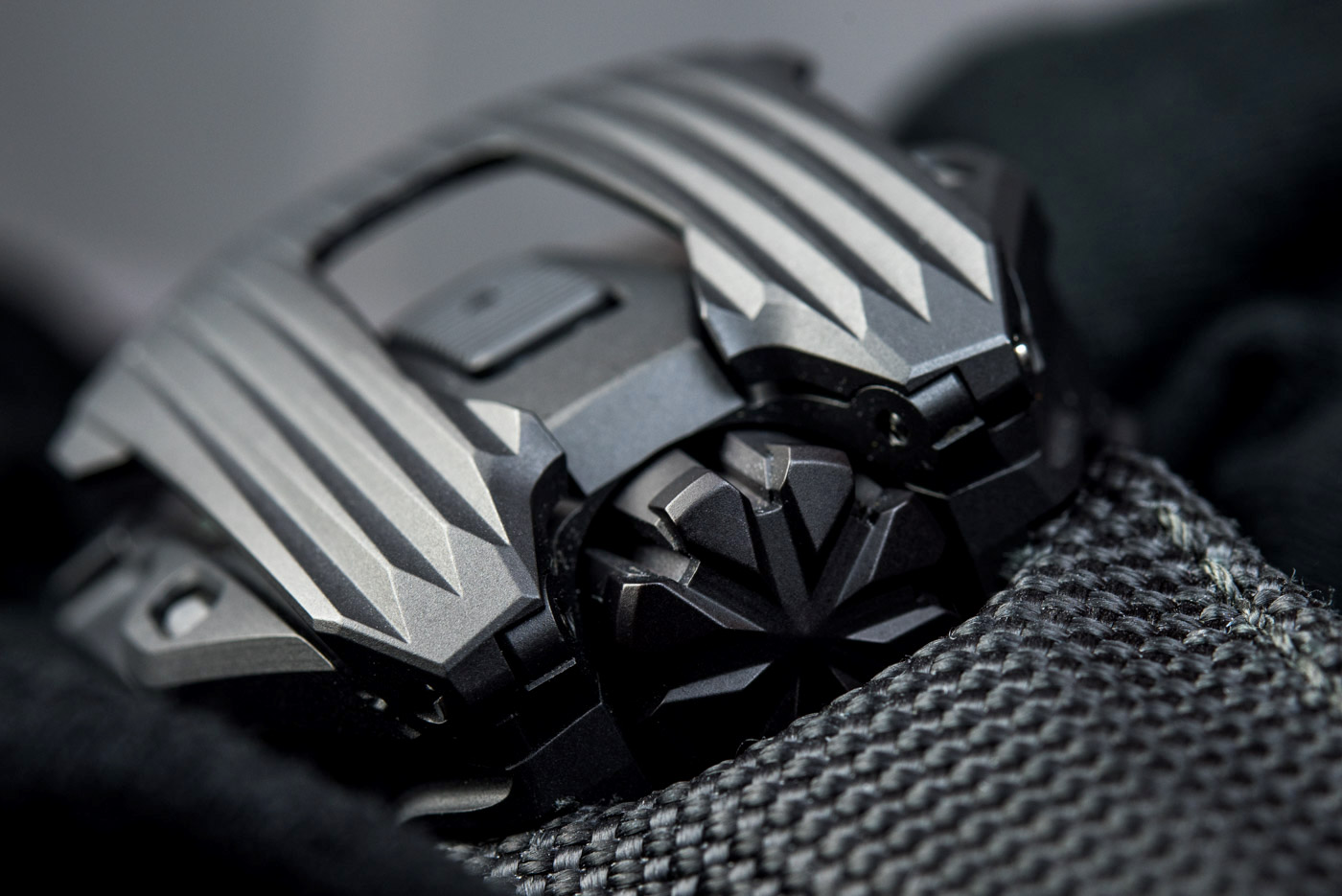 Even the far end of the watch fails to be anything less than cool. The way the hood slopes down and its wedges end like the over-architected roofs of overpriced Olympic stadiums is just one of the many details that would tempt many of us into wearing the UR-105 CT Kryptonite back to front on the wrist. Then there are the thick hinges that allow the hood to swivel and last, but most definitely not least, the massive crown that resembles a mincing machine Batman would happily fit onto the front of his Batmobile. Too bad that the crown itself is hideously uncomfortable to use on or off the wrist for setting the time, for the otherwise splendid strap is in the way. Winding, however, is easy, as one simply needs to slide his finger over the crown and it will quickly and efficiently replenish the power reserve. However, even with the hindered usability noted, I feel proud that this level of design and quality of execution exists in watchmaking. I mean, just look at that shot above. That’s a watch! 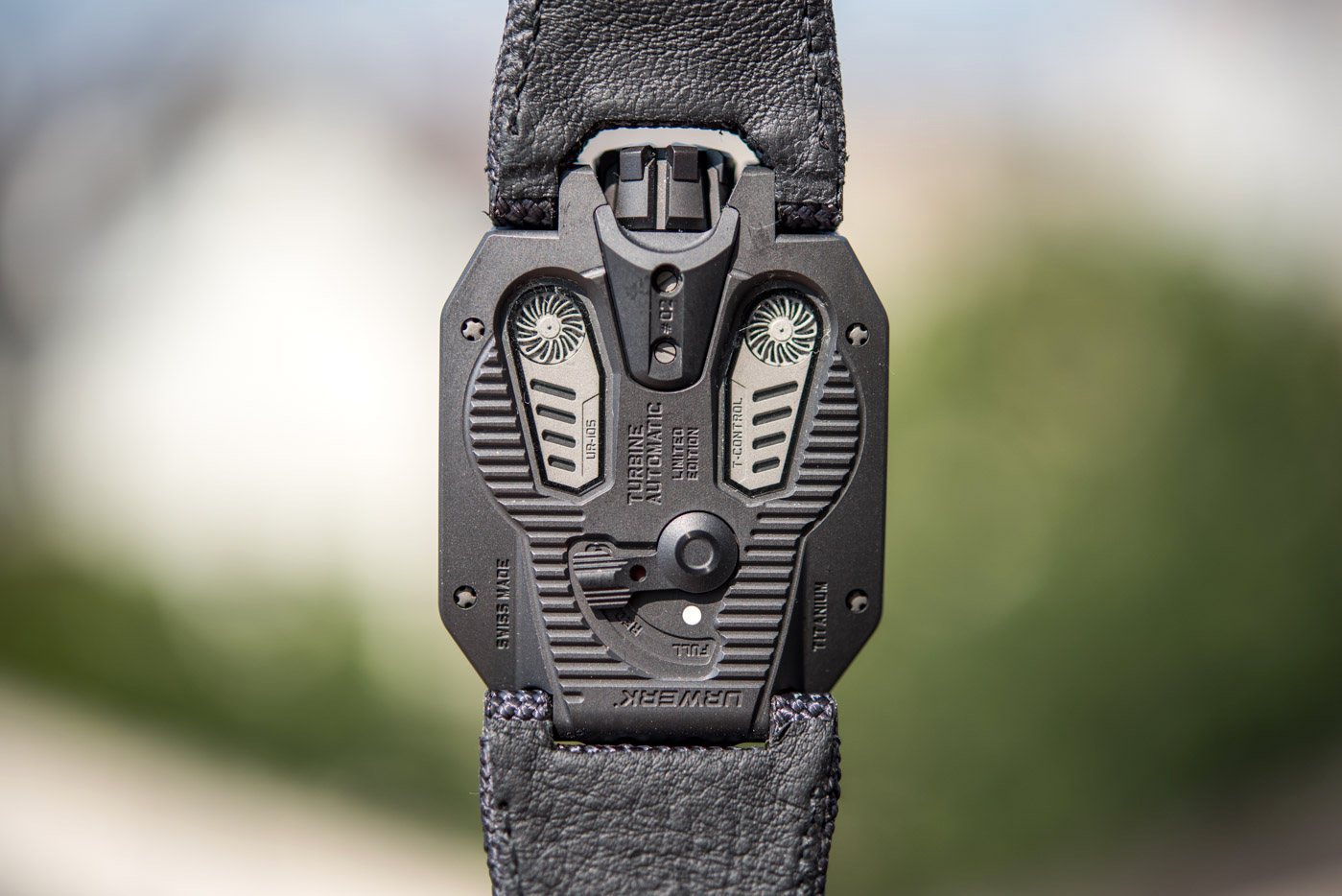 The caseback isn’t your standard caseback either – surprising, huh? The caseback has the number of the watch, some slits, some screws, some bulges, and some text on it… Oh, and a FULL – RED. – STOP switch and two turbines too! Because what’s an Urwerk without turbines, right? The two turbines are connected to the automatic winding system of the movement through what I expect to be some rather aggressively geared accelerator wheels. As your wrist moves and the automatic winding mechanism gets to work, these turbines that are visible spin up frantically. The only downside to this is the sound of said accelerator wheels. Because they are small and spin fast, they create a whirring sound that it isn’t very pleasurable. 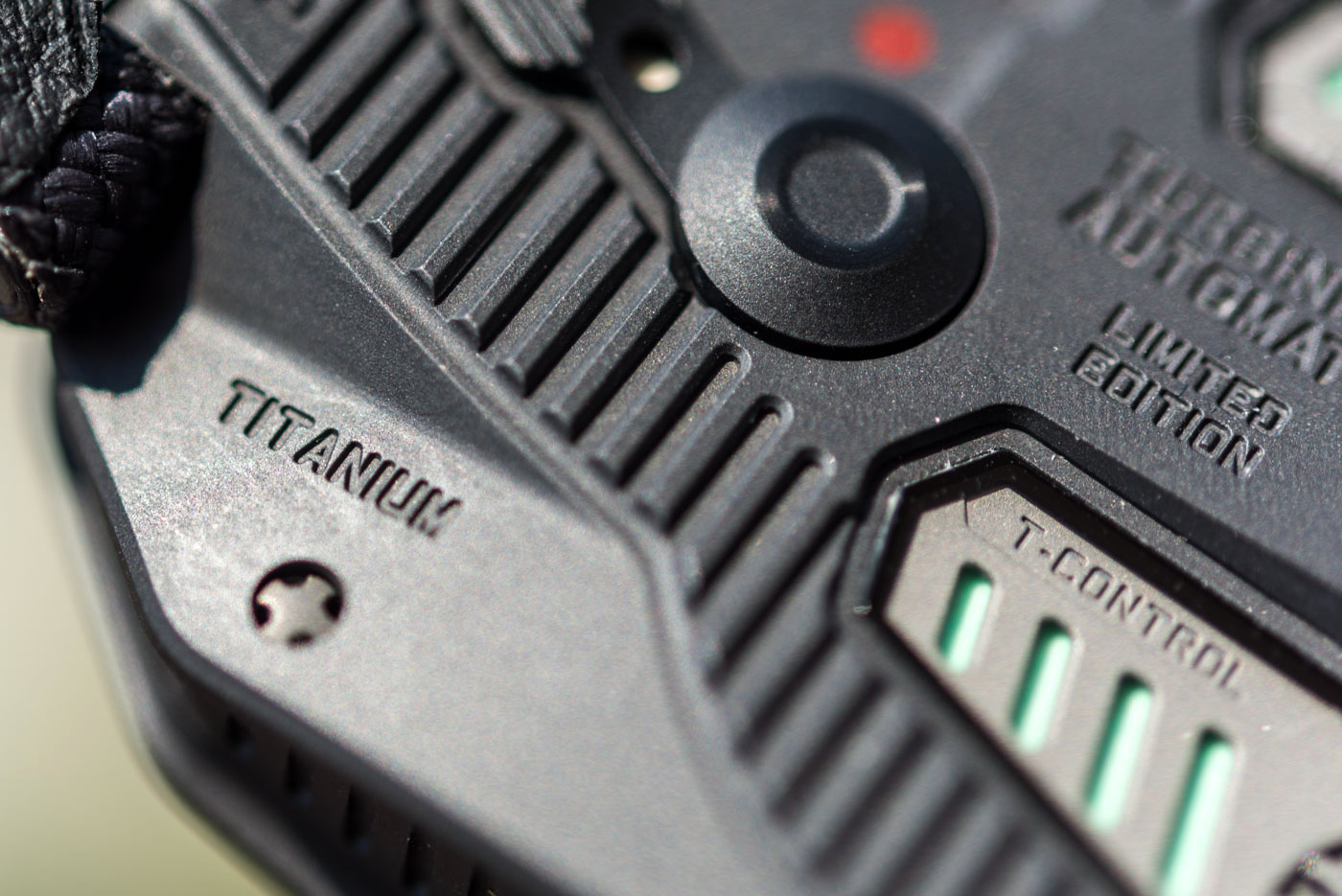 If there’s one thing I’d do away with on the UR-105 CT, that’s the turbine and automatic winding system – especially since it could result in a slightly slimmer case and lighter overall mass. The upside? Well, the solution to this over-engineering related issue is, strangely, over-engineering. Because Urwerk has created a flip switch that allows one to slow down or entirely block the rotors – and by doing so, render some of the green slits near the turbines dark grey, i.e. “closed.” Although the automatic winding system I found to be efficient in rewinding the movement, I quickly disabled the mechanism entirely – I don’t like to hear a whirring sound every time I lift my left hand to my face or head. Some may love the UR-105 CT for this added sound show and turbine stuff – but I could see it gone and not miss it. Power reserve is 48 hours and operating frequency is 4Hz. 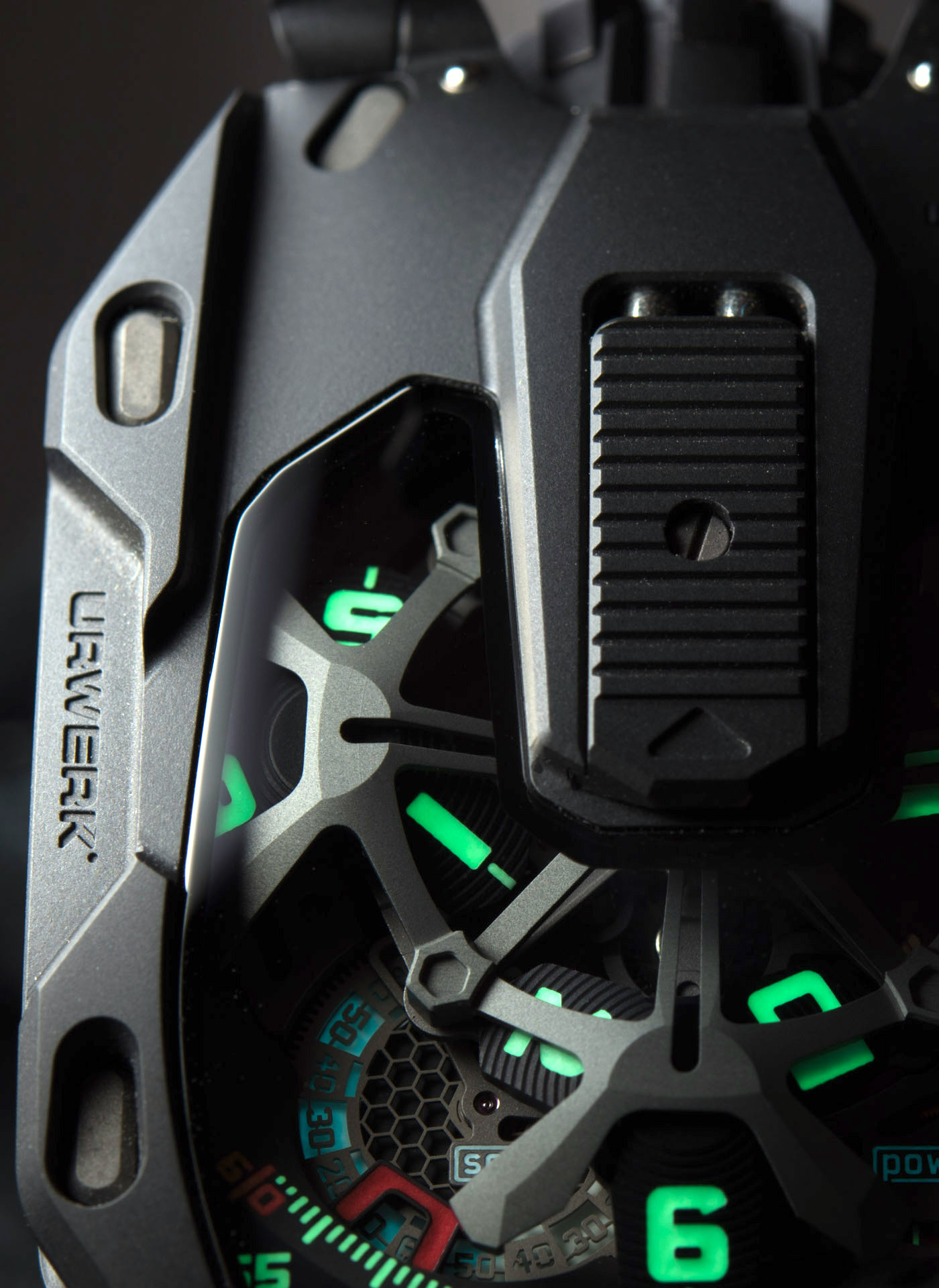 The first and most important thing that I want to share based on the time that I’ve spent with the Urwerk UR-105 CT Kryptonite is that I’m happy that it exists. Now, that statement is a bit deeper than it sounds. If it was uncomfortable, unwearable, illegible, functioned poorly or was overpriced, I wouldn’t have said that. The industry is chock full of exercises in doing one thing (which may be sheer entertainment) very well – and doing so to the detriment of all those aforementioned values. The UR-105 is a watch that does what it says on the tin: it’s an Urwerk with all the crazy engineering and detailing that has earned the brand the fame and celebration it enjoys among watch lovers and customers – wrapped in an actual tin, rendering the whole package more discreet and under-the-radar. 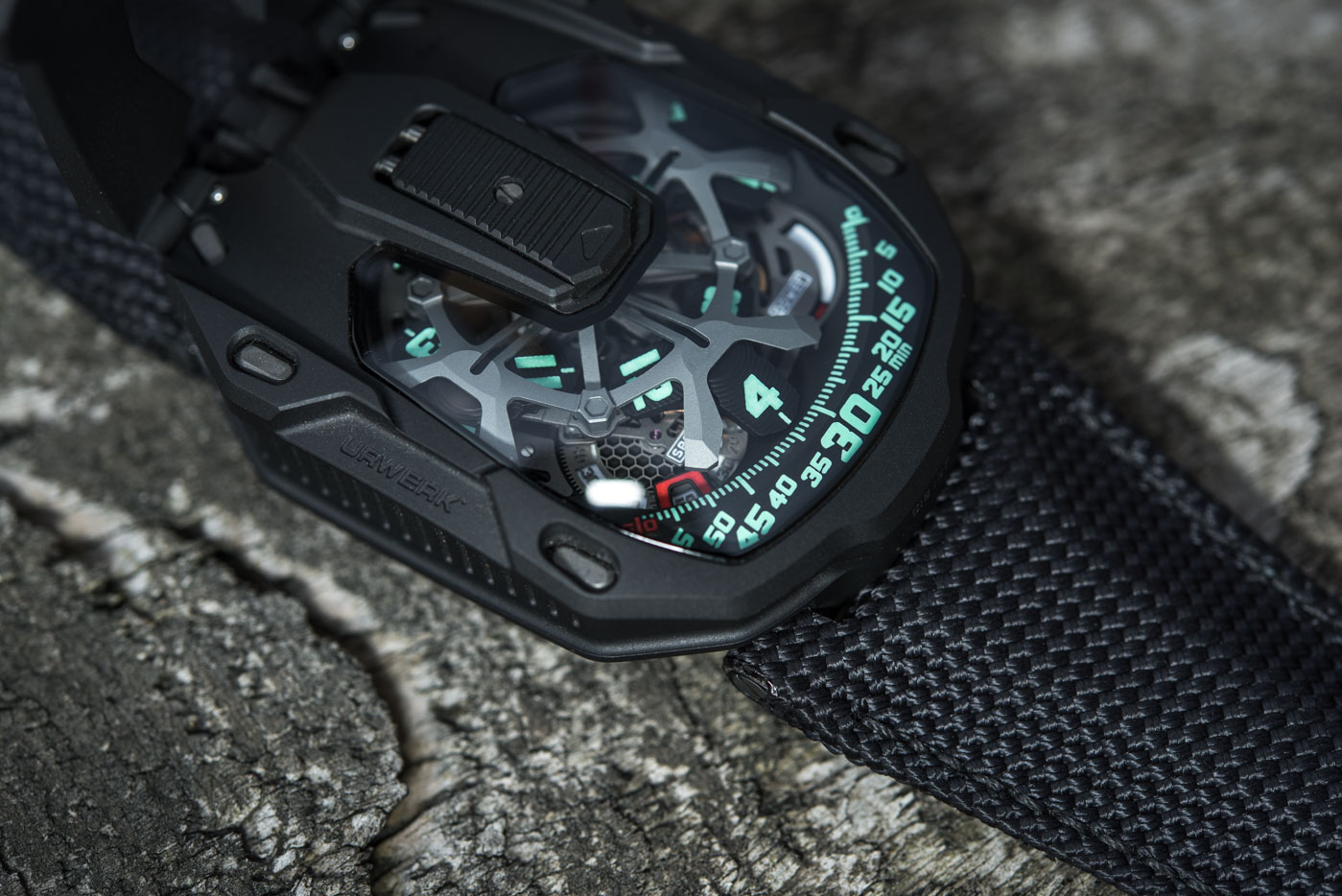 Whether or not an under-the-radar Urwerk makes any sense is for everyone to decide. However, having worn it in a good number of places in the world, including, of course, busy towns and their myriads of ordinary everyday places, I can report that Urwerk has indeed succeeded at finally producing a watch that won’t get you mugged – or even nagged by a large % of watch enthusiasts… so long as you keep the hood closed. What others think about is just one – rather small – part of the equation. What really matters is how an expensive toy such as the UR-105 CT Kryptonite will make you feel… And to this, I’ll say: if you’re a seasoned watch collector who’s utterly bored with having to share the crazy piece of horology you like to wear with the curious masses, or just simply want a more versatile piece, this watch is definitely for you. Me, having never owned an Urwerk, I think I’d prefer one without the hood and live with the consequences. That being said, I truly appreciate Urwerk going through the trouble of engineering such a neatly executed cover for the 105. It transforms the look of the watch as much as the tone of the brand, both of which now are verging somewhere between cool and stealthy. 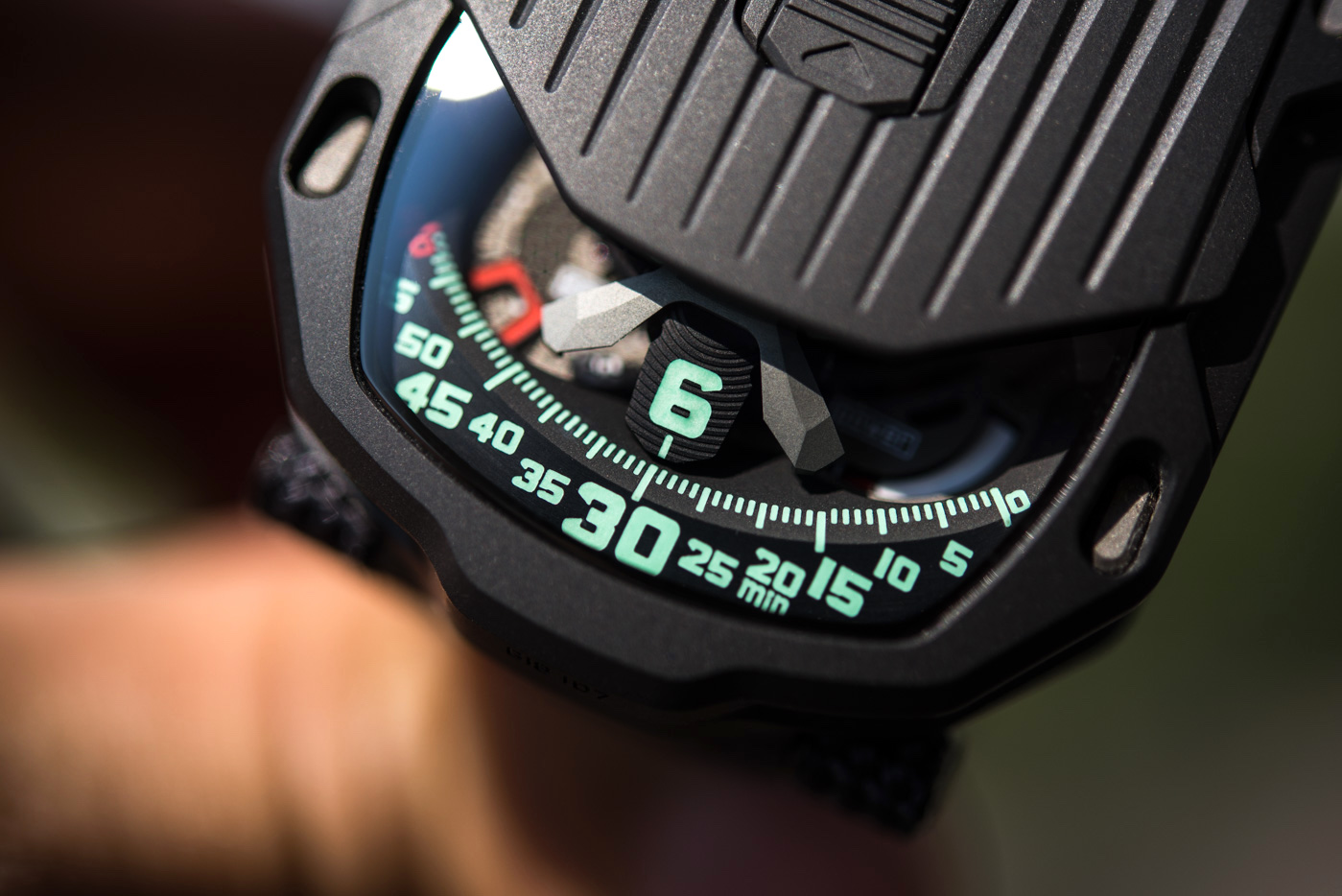 With all that said, the Urwerk UR-105 Kryptonite will have no trouble proving to be the perfect toy to add to the fleet for some select collectors – the sort of guy (or gal), who I presume is an aspiring Tony Stark impersonator, with an actual Audi R8 V10 in the garage. And, despite its relatively low-profile execution, this particular piece, just like the brand itself, could also walk up like an inch away from a Patek 5396 and laugh in its face… Just how the R8’s loud exhaust would bother the try-hard snob in the vintage Porsche, as they briefly meet in a tunnel somewhere on the Swiss highway.

Price for the Urwerk UR-105 Kryptonite is 65,000 CHF without taxes. urwerk.com

Necessary Data
>Brand: Urwerk
>Model: UR-105 Kryptonite
>Price: 65,000 CHF
>Size: Width 39.5mm Length: 53mm Thickness: 17.3mm
>When reviewer would personally wear it: Anytime apart from sports activities.
>Friend we’d recommend it to first: The one really into not only owning, but also frequently wearing crazy watches. This is one he could get away with rocking all the time.
>Best characteristic of watch: Not the sort of attention magnet one would expect it to be – it flies low. Fantastic workmanship, execution and attention to detail – including wearability.
>Worst characteristic of watch: My immature soul isn’t quite prepared for a relativelyl ow-key Urwerk – I’d like it to be a bit more insane, still! Loud winding mechanism.