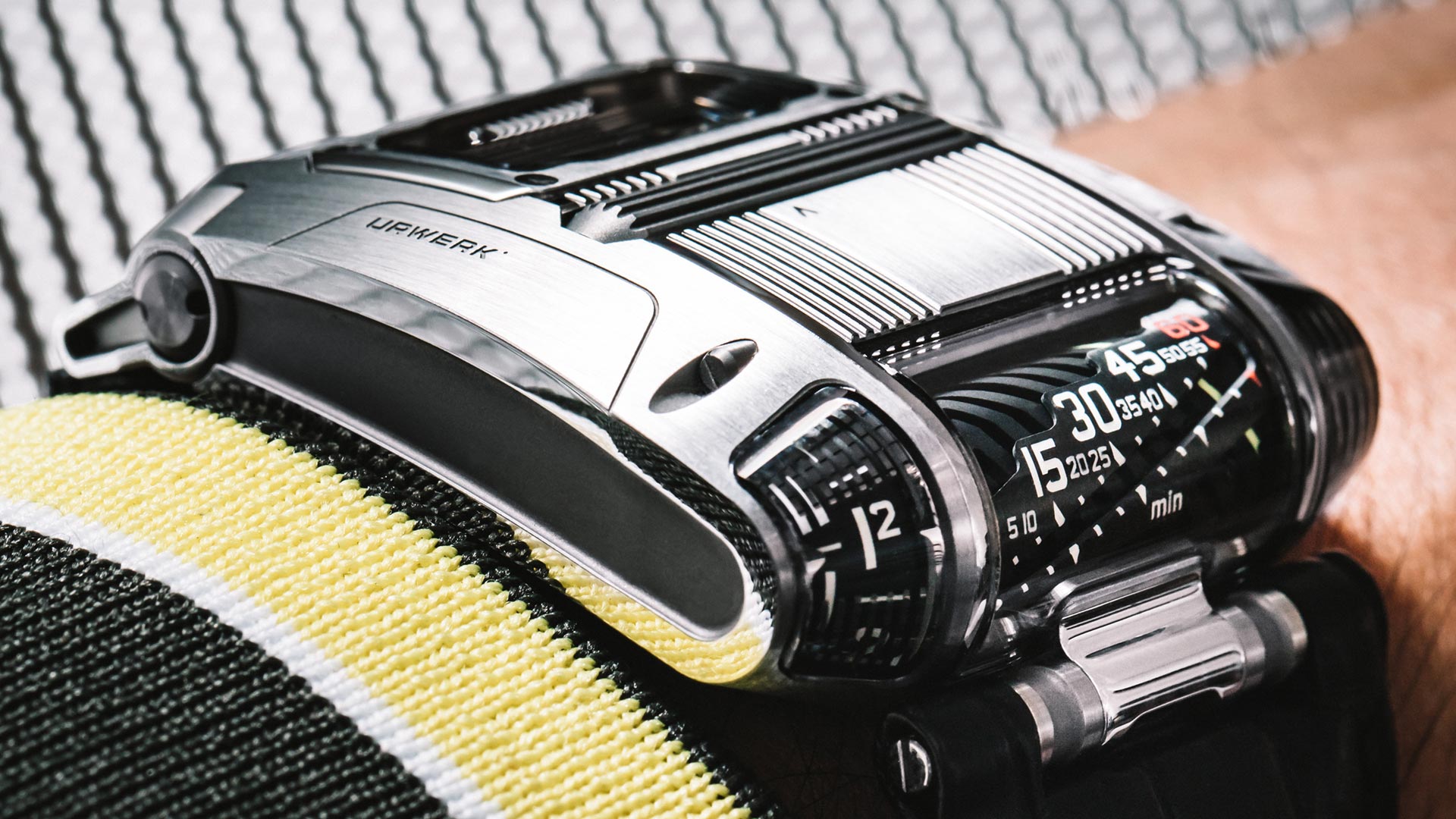 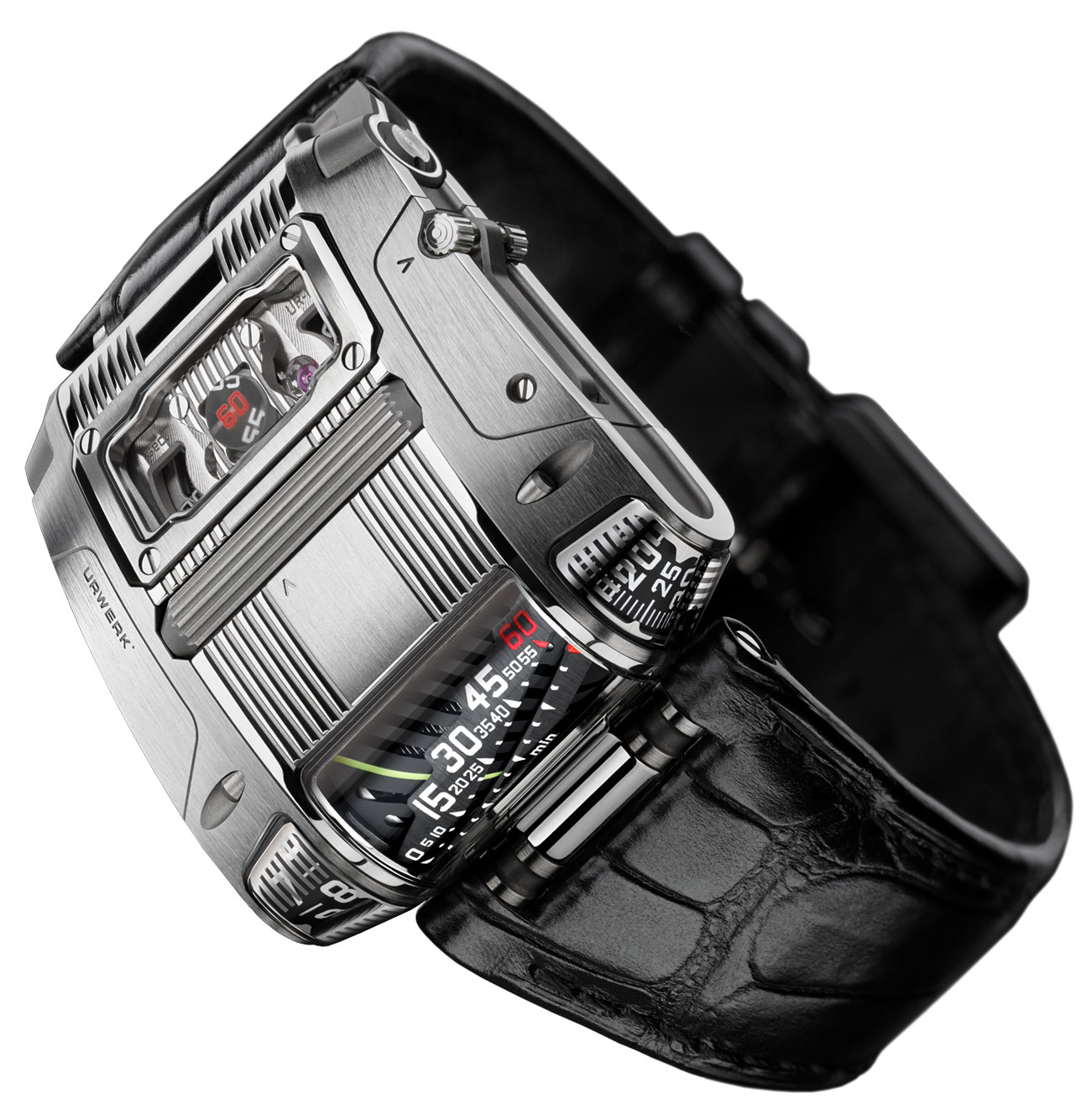 Debuted here, the new Urwerk UR-111C is unlike any other Urwerk watch before it, but still unmistakably carries the brand’s distinctive concepts and DNA. It also happens to be beautiful with a new system to connect user and machine. Completely novel watches from the Swiss brand are worth taking notice of because they are somewhat rare and bound to be something you never quite imagined. Expect an uncanny-cool aesthetic with highly technical, complicated mechanics; don’t expect the time to be indicated in a conventional way. In the brand’s “Special Projects” line, the UR-111C forgoes Urwerk’s signature “satellite hours” complication in favor of an equally unorthodox approach inspired by the older Urwerk UR-CC1 “King Cobra” model from several years ago. Like any watch from the brand, a good deal of explanation is required.

More emotional than practical (that’s most luxury watches, let’s be honest), the UR-111C continues Urwerk’s interesting mission to “connect” humans and machines. Here’s a quote from Urwerk co-founder Felix Baumgartner on the UR-111C that helps explain the mentality of the people behind such products; “there has to be a strong bond with a mechanism that merges into your wrist and communicates with you. A mechanical watch is like the first steps towards enhanced intelligence: a machine that becomes part of you and which gives you information in return for energy. It’s an exchange. You take care of your watch and it will provide you with a lifelong service.”  Brilliance or Marketing BS, only thinking such as this (and luxury timepiece budgets) makes exciting “big boy toys” like the UR-111C even possible. 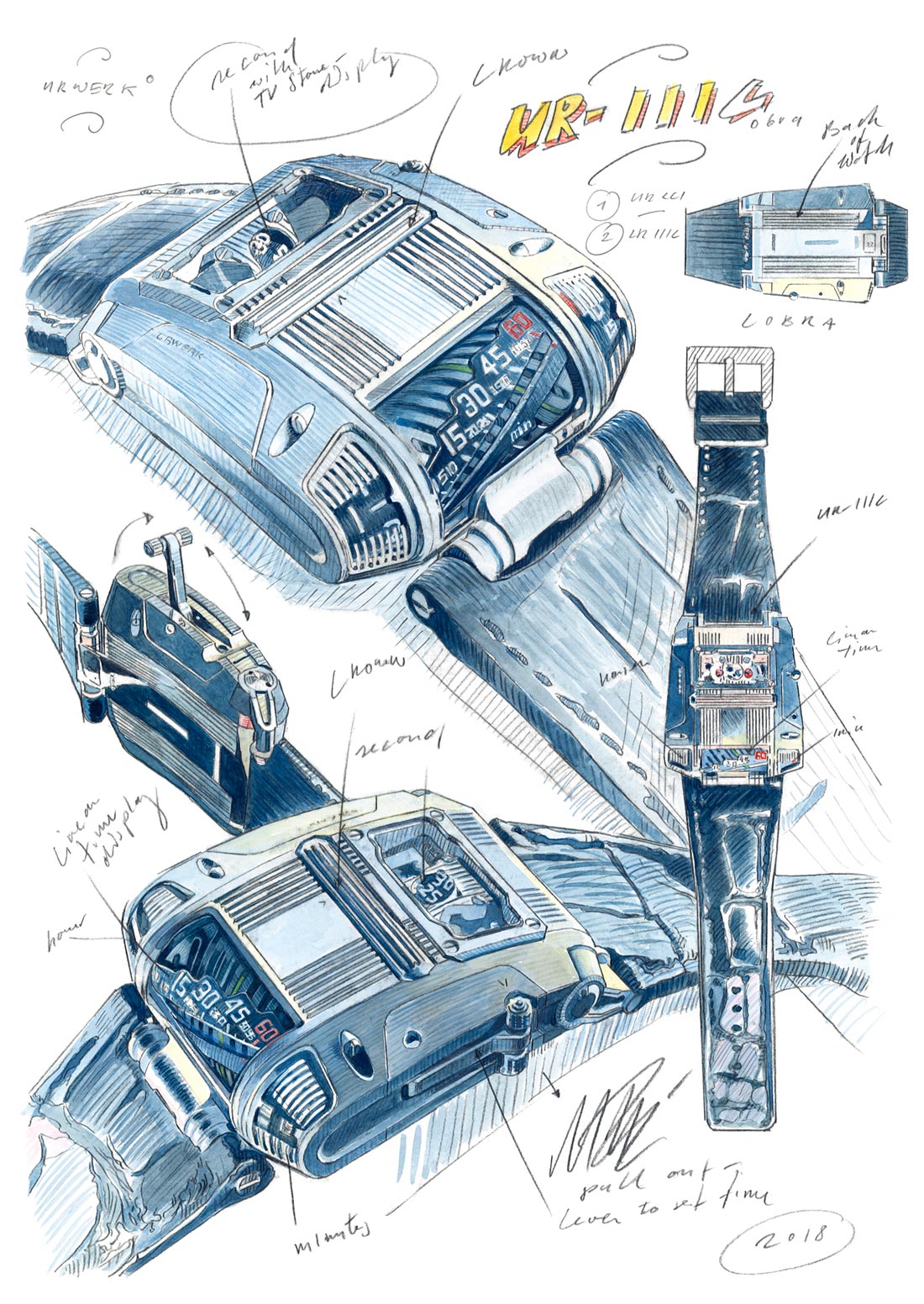 Urwerk is known for, first, making ultra high-end watches that seem as if out of some dark sci-fi universe. More specifically, however, their best known watches use “satellite” hour hands that are related to what are called “wandering hours” in traditional watchmaking. That is a rather complicated system in which a hand that itself displays the hour travels along a track to indicate the minutes. Urwerk specializes in a genre that might be called “alternative” time displays — though they managed to surprise me, at least, with some conventionally round analog dials on their EMC watches, such as the Time Hunter (hands-on here). The Urwerk UR-111C time displays, on the other hand, are both “linear” and “digital.” 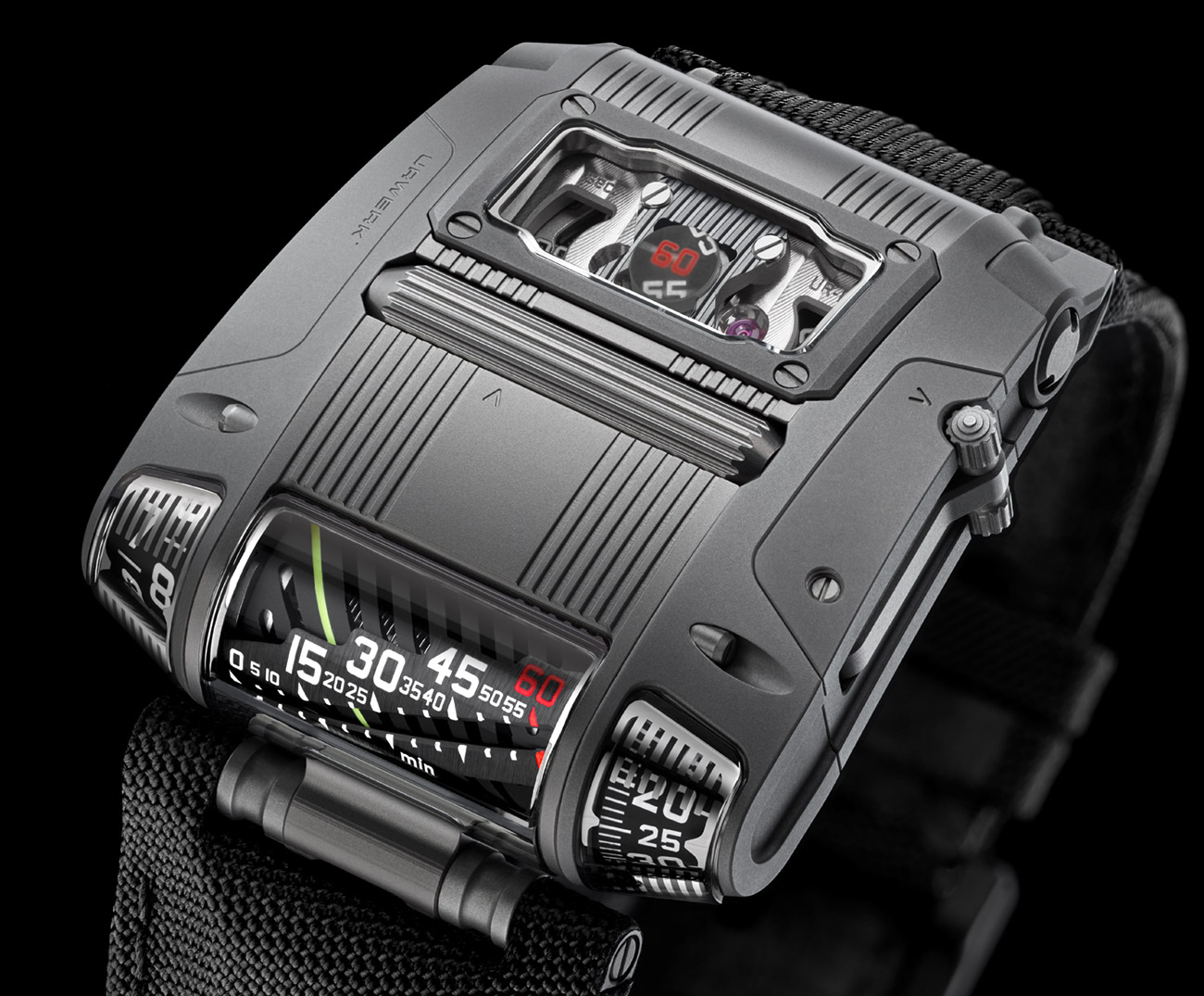 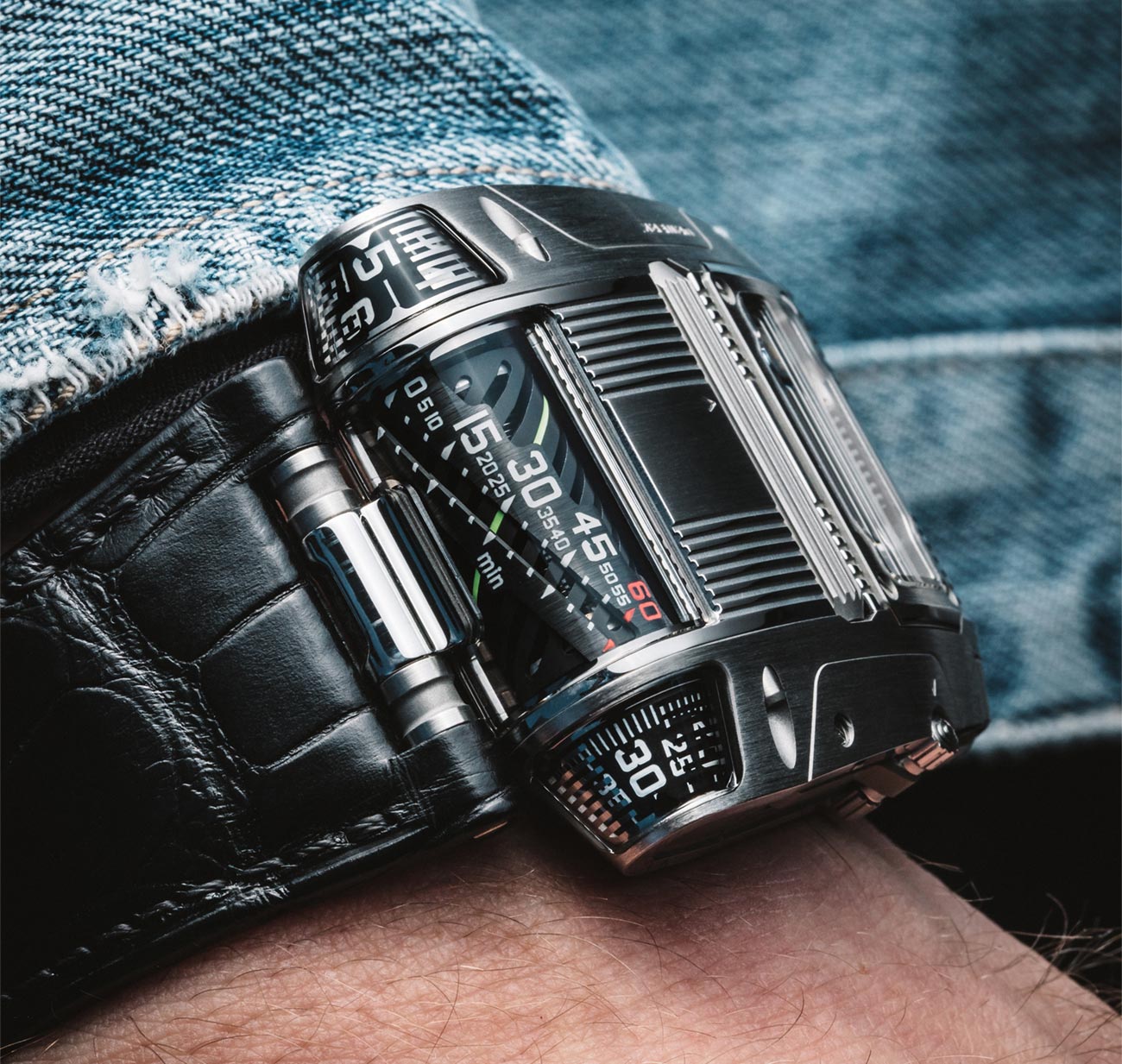 I said “completely novel,” but the Urwerk UR-111C is in fact an evolution in some ways of the earlier Urwerk UR-CC1 King Cobra watch (hands-on here). The new Urwerk UR-111C doesn’t look much like the King Cobra, but it shares the front-facing (driver’s watch style) linear display as well as an unusual way of showing the running seconds on top of the watch. In a few ways, the Urwerk UR-111C reminds me of a much more involved, refined, and expensive Azimuth SP-1 Landship (reviewed here) due to elements of its case shape and displays. Ok, I think we just need a quick overview of what we are looking at on the Urwerk UR-111C before going on to describe all the weird things Urwerk did to make it look that way, and so that we can fully appreciate its coolness. 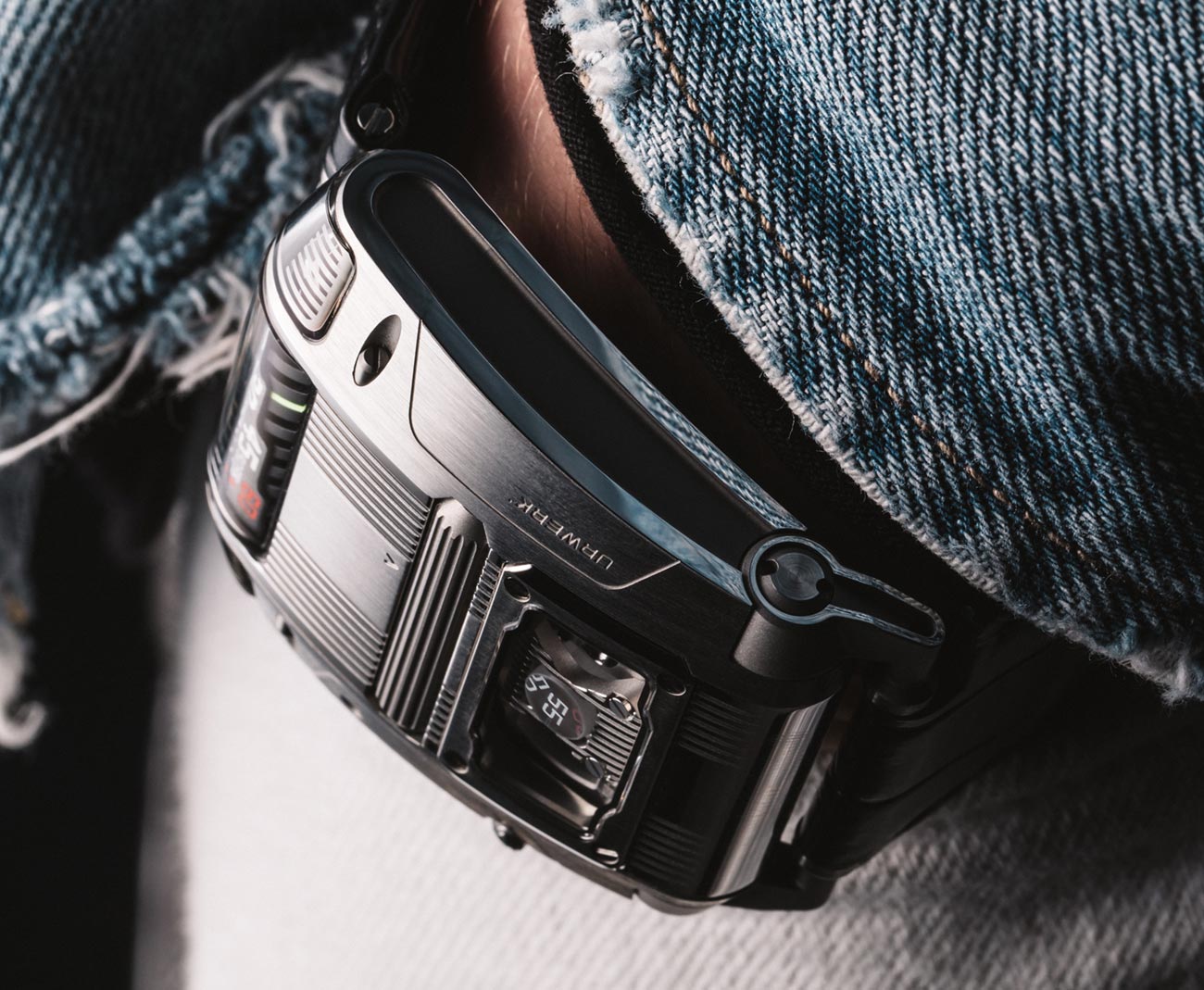 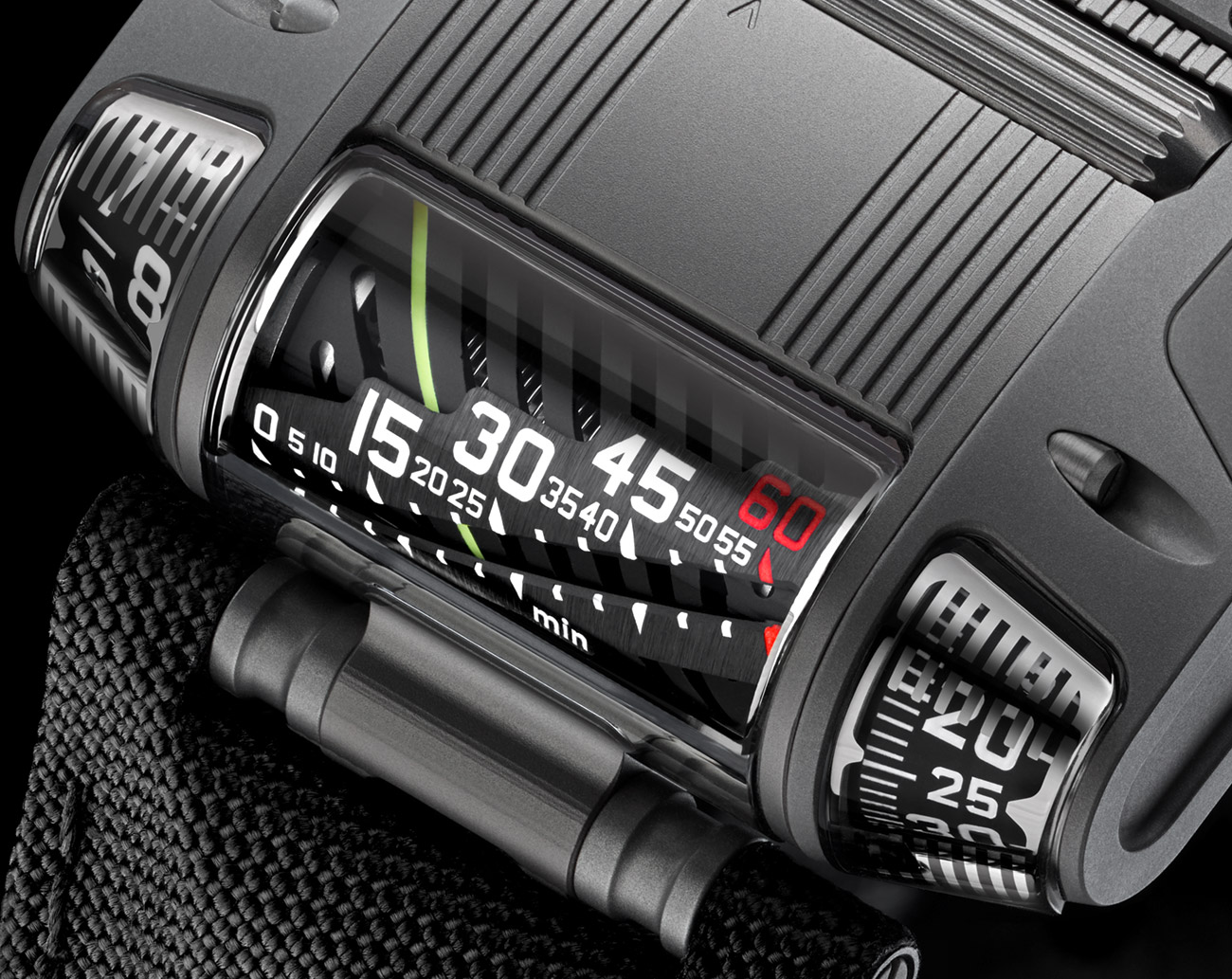 Direct your attention to the “front” of the watch which would be facing you while, say, driving without having to turn your wrist. The hours are displayed on the far left, and the other two displays are both the minutes. The seconds are displayed at the “top” of the watch above a roller that performs the same duties as a traditional crown. On the side of the case is a lever that allows you to change the crown’s function. There are a lot more interesting details to note for each of these things, but now we can move beyond the initial bedazzlement of the Urwerk UR-111C’s crazy design. 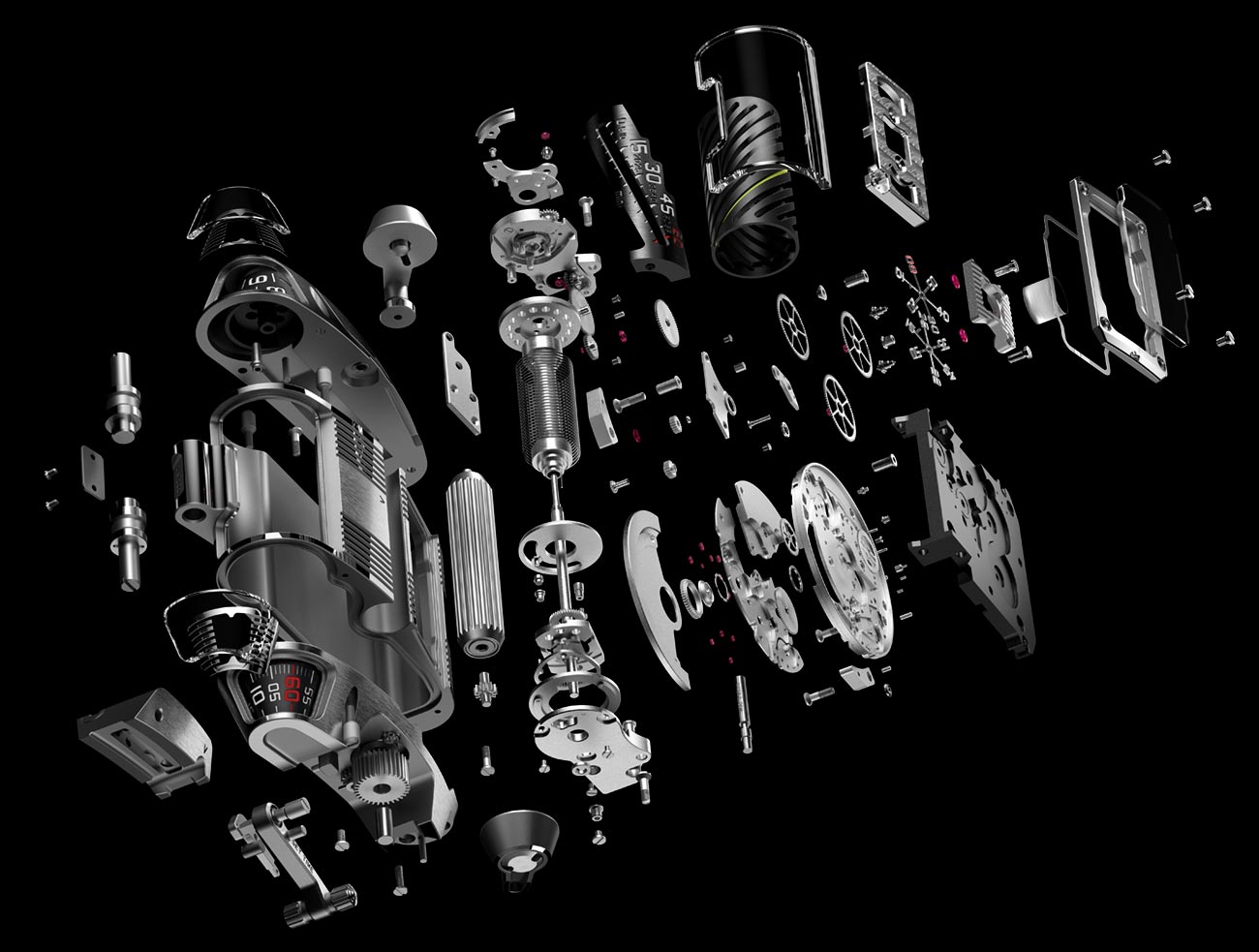 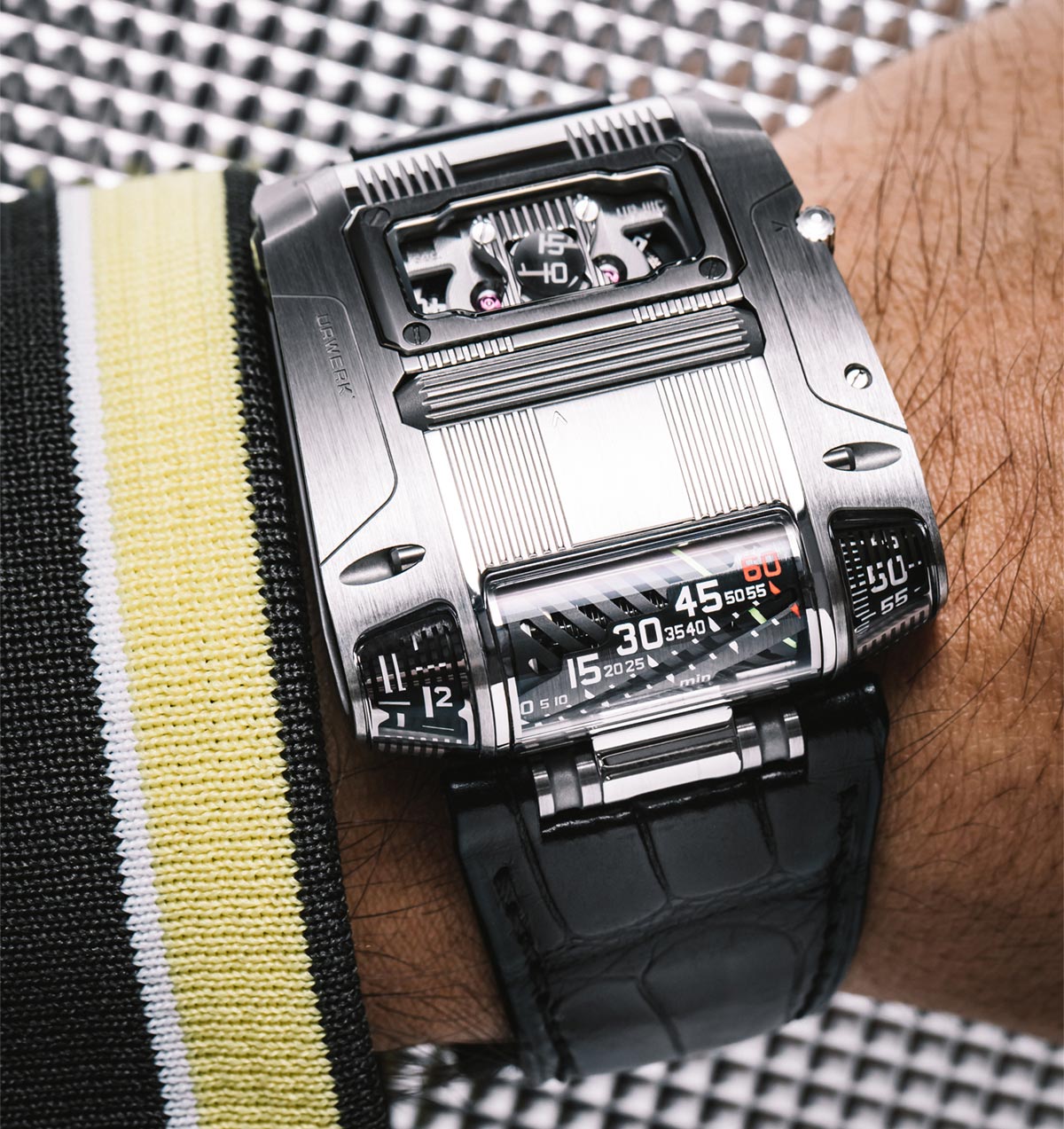 The first thing to know about these unconventional time displays is that the hours are jumping and the linear minutes are retrograde. So that means that at upon reaching the 60th minute, the minute scale jumps back to zero and the hour jumps ahead. I believe that the semi-conical minute display to the far right simply keeps turning as normal. The retrograde minute display is similar to that on the UR-CC1 King Cobra watch but even more visually distinctive because it is both curved and angled. The indicator behind it is a rolling cylinder, and as it turns it winds a spring that powers the jump of the hours and the retrograde minutes. The angle of the display meant that the minutes jump back to zero after cylinder has turned only 300 degrees.

On the top of the Urwerk UR-111C is what may look like the magnifying glass found over the date display of many watches, commonly called a “cyclops.” In fact, it is the seconds display, and it uses technology that Urwerk says is a “première” for watchmaking: the use of optical fibers — but I’ll come back to that. Two separate wheels are used to display the seconds: one with the cutout shapes of 10, 20, 30, 40, 50 and 60, and the other with 5, 15, 25, 35, 45 and 55. Each passes alternately into view, kind of mimicking the way the teeth of gears interact and producing a cool effect as they enter the aperture from either side. But these aren’t any cutout numerals as you might find, say, on a skeletonized Hublot date display (I am thinking of something like the Big Bang Unico reviewed here). 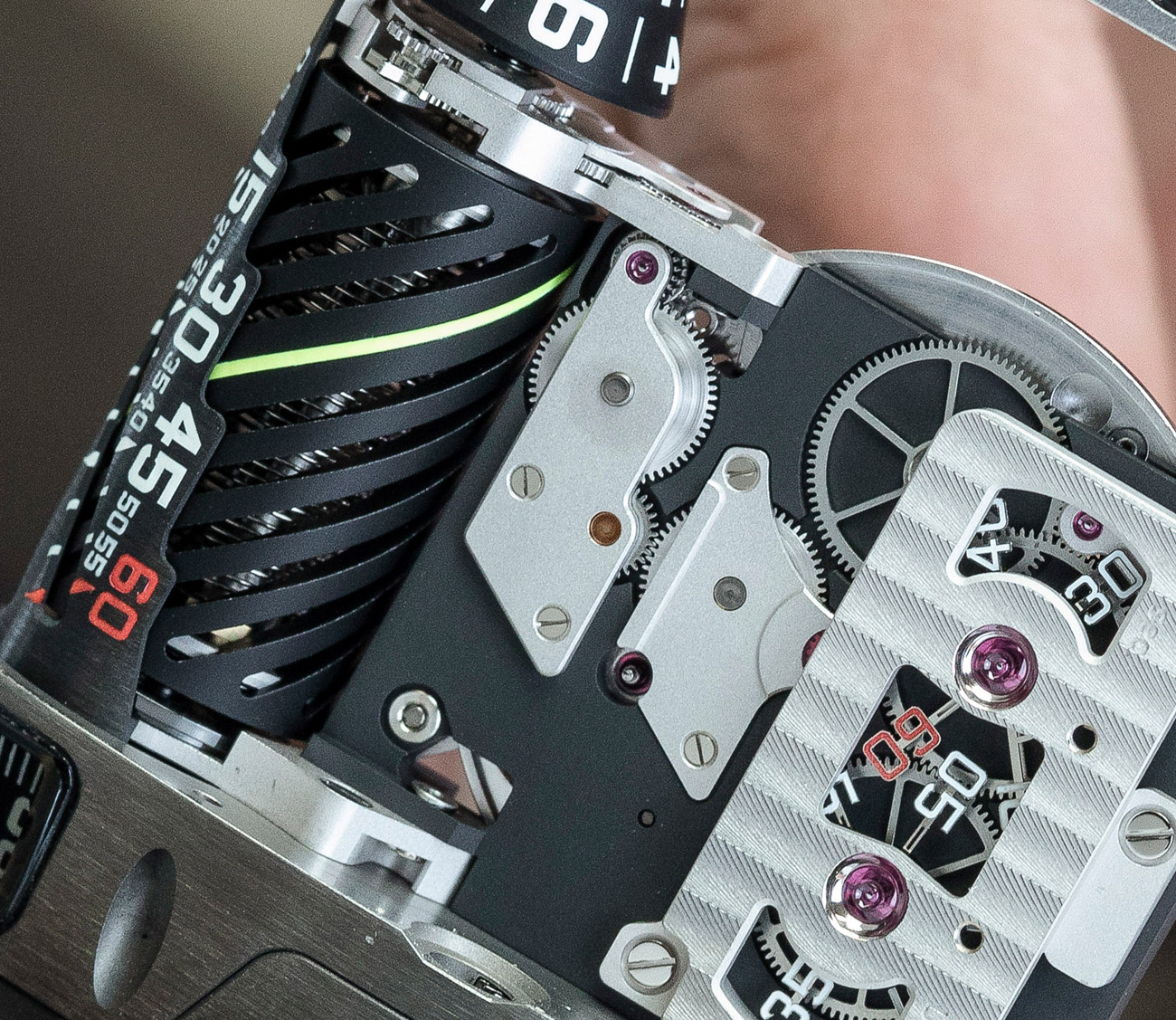 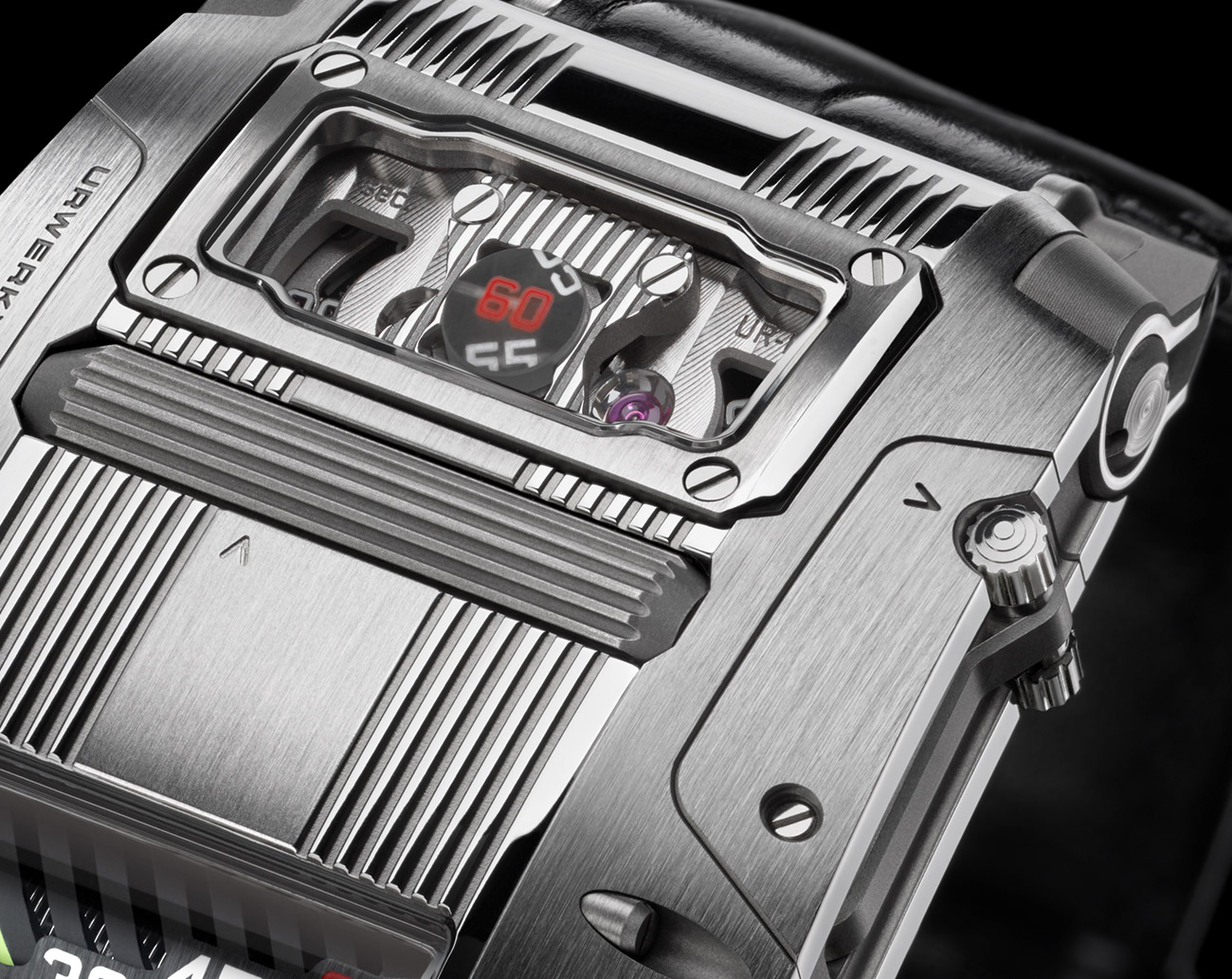 Urwerk says that the discs carrying the seconds’ numerals are made from nickel using the LIGA process, which Wikipedia describes as a “fabrication technology used to create high-aspect-ratio microstructures.” So this means they are created using technology similar to that used to make things like the first microchips, and each disc weighs only 0.025g including its numerals. That’s not all that makes this seconds display unusual. The round window, actually 0.1mm above the numerals, we are told, is not a magnifying glass, and rather a “dense cluster of precisely aligned optical fibers, known as an image conduit.” It is hard to determine or imagine the visual effect based on Urwerk’s description, but we are told that the numerals appear “strangely close” — presumably, they mean close to the surface of the display. 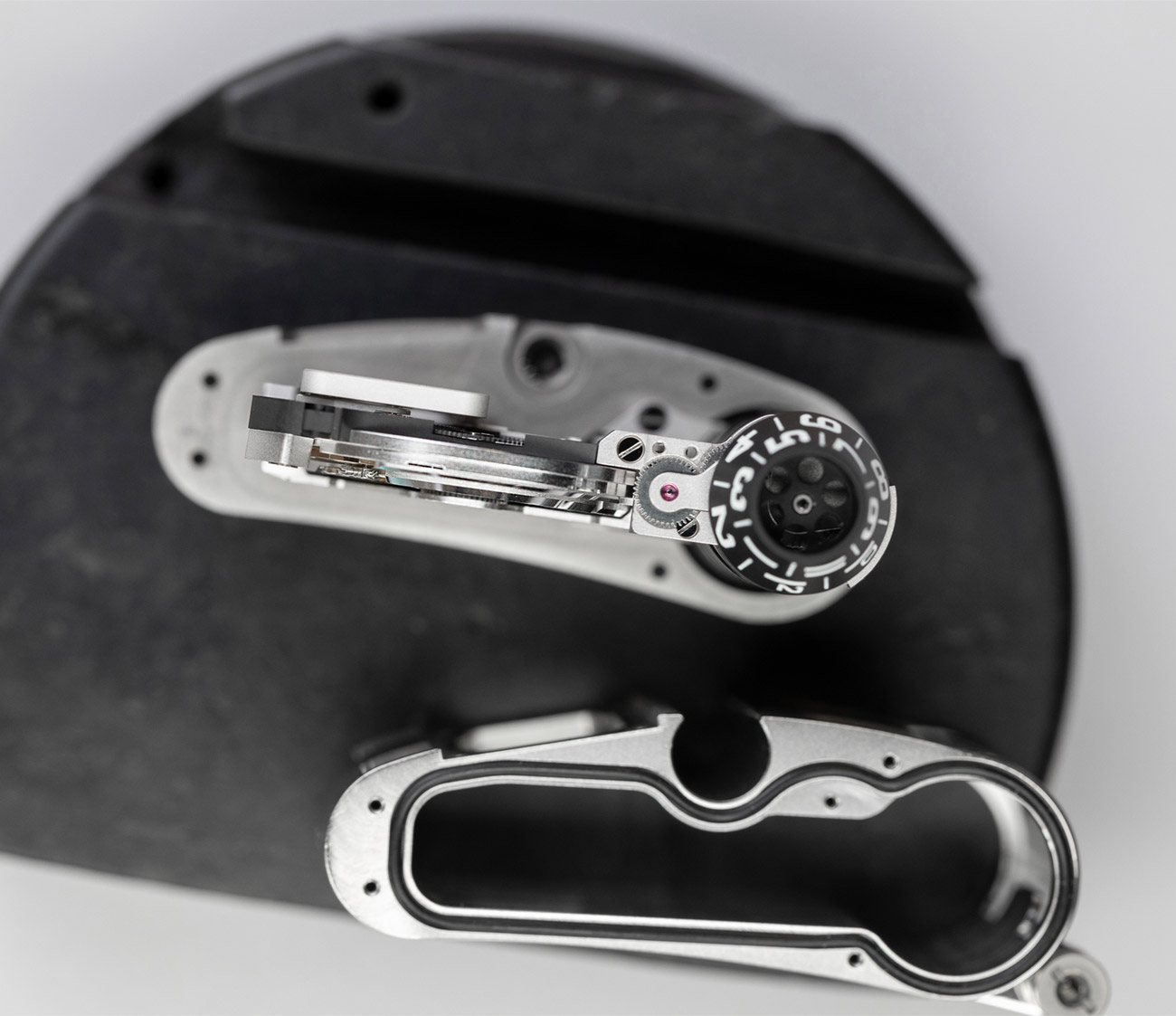 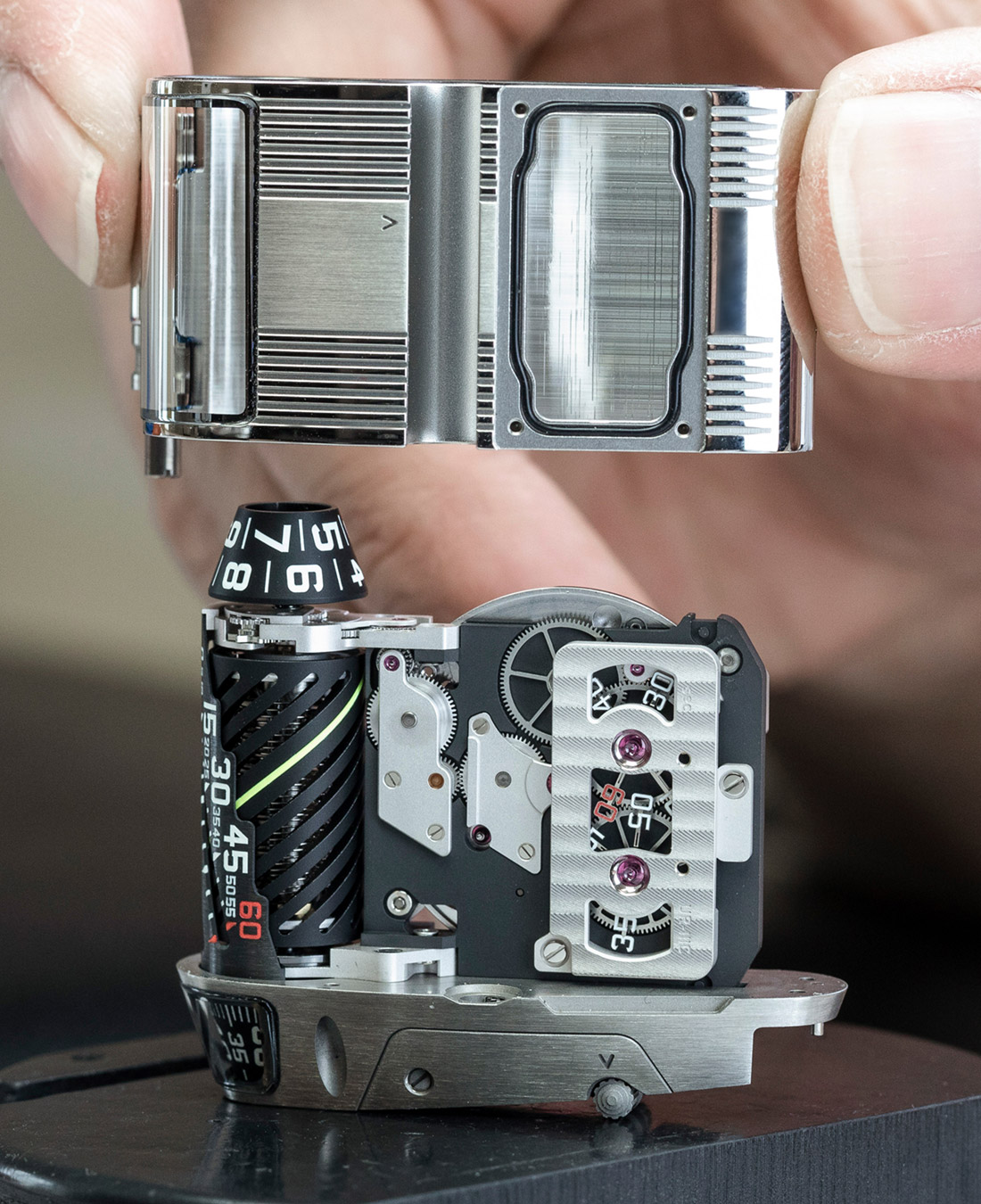 Finally, the cylinder on top of the case, as mentioned, performs the role of a crown. You can wind the watch with it as normal (although we should add that Urwerk claims this form of winding a movement is better than normal), or flip up the lever on the case side to change it to time-setting mode, and then set the time backwards or forwards. The unusual positioning of the crown along with the time display’s cylinders and vertical orientation in relation to the horizontally flat movement required some technical solutions including things like beveled gears in a number of places. The movement is automatic (with a rotor no one will see), with a power reserve of 48 hours, operates at 4Hz, and is decorated with Geneva stripes, circular graining, and sanding. I’d like to be able to see more of it, actually, and Urwerk hasn’t provided any caseback images for now. 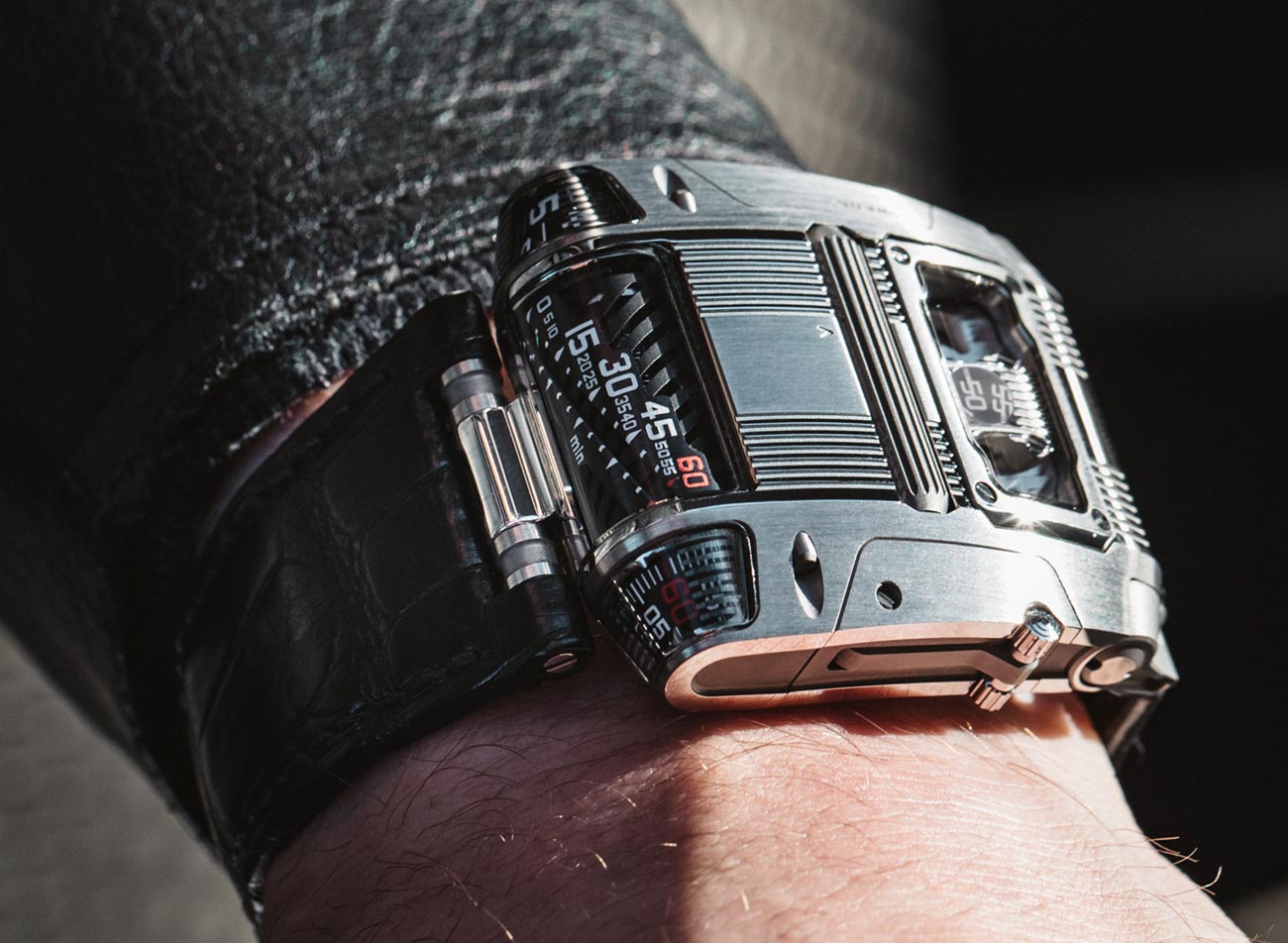 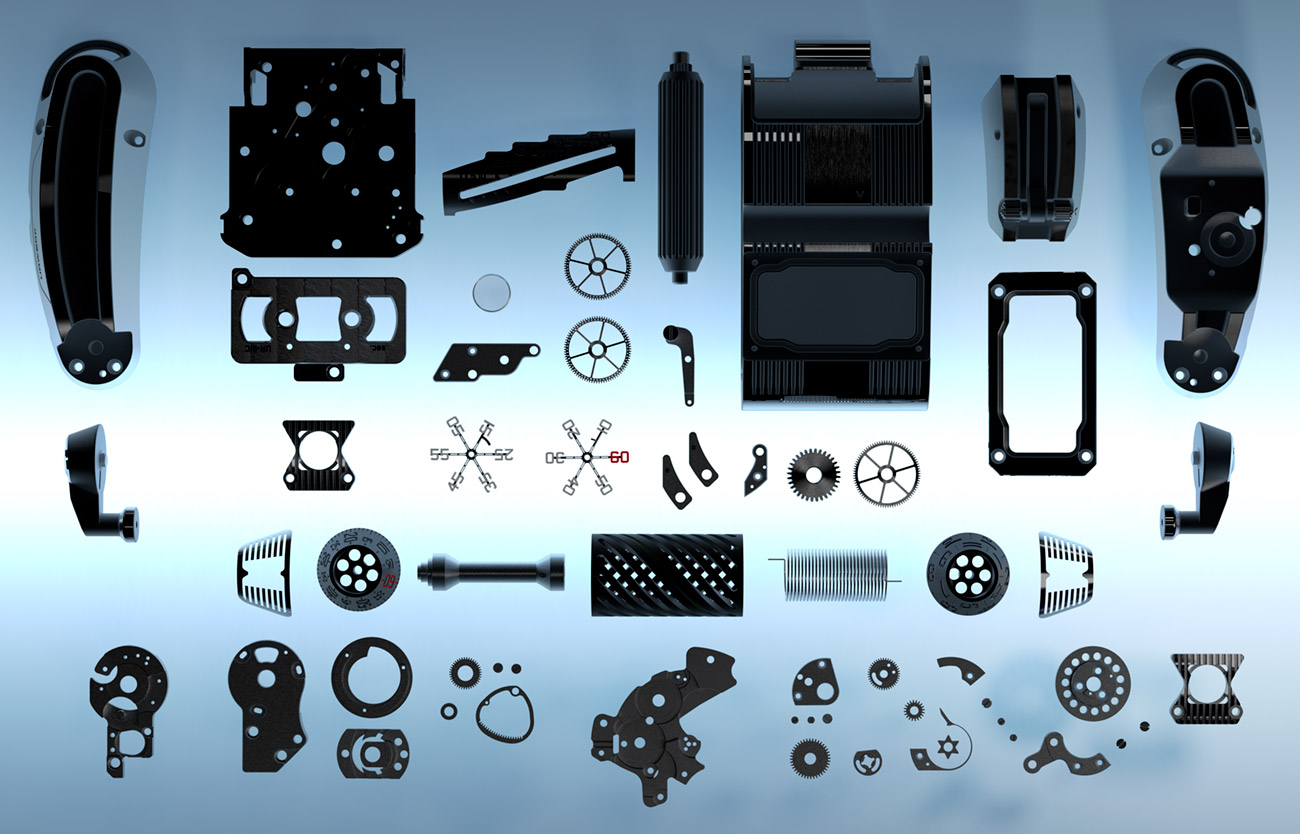 The case is also obviously complex and features a mix of finishes, with even the screw heads finished differently according to the surface where they appear. It comes in polished or gunmetal steel and measures 42mm wide by 46mm long, and 15mm thick, with a water-resistance rating of 30m. The movement is installed from the side with very precise tolerances, we are told. While just about everything about the Urwerk UR-111C is odd, the two minute displays seem a little redundant to me. With so much complexity going on otherwise, it hardly seems like it would have been too much of a stretch to use the digital minutes display to the right for the date or maybe a power reserve indicator, for example. 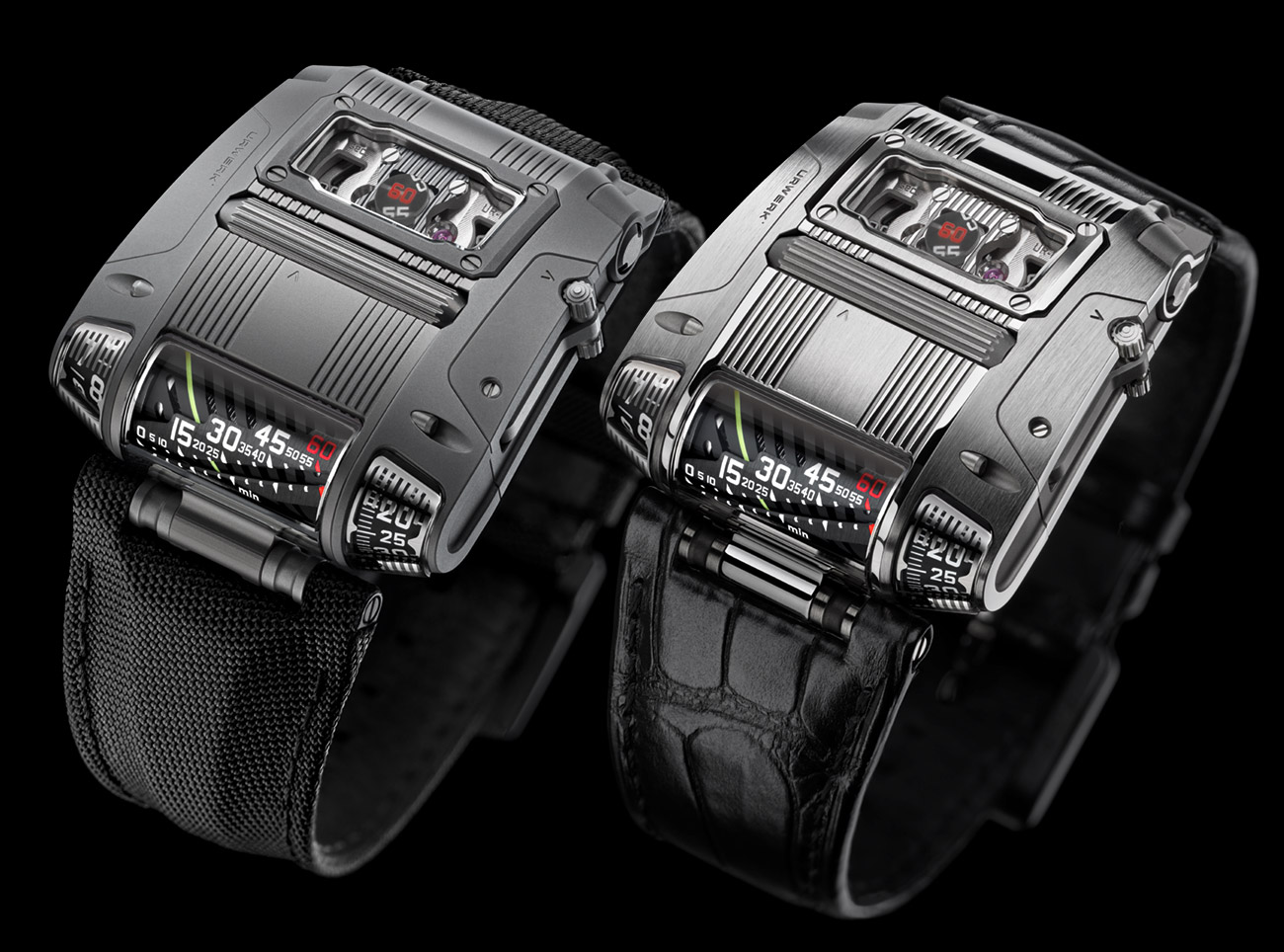 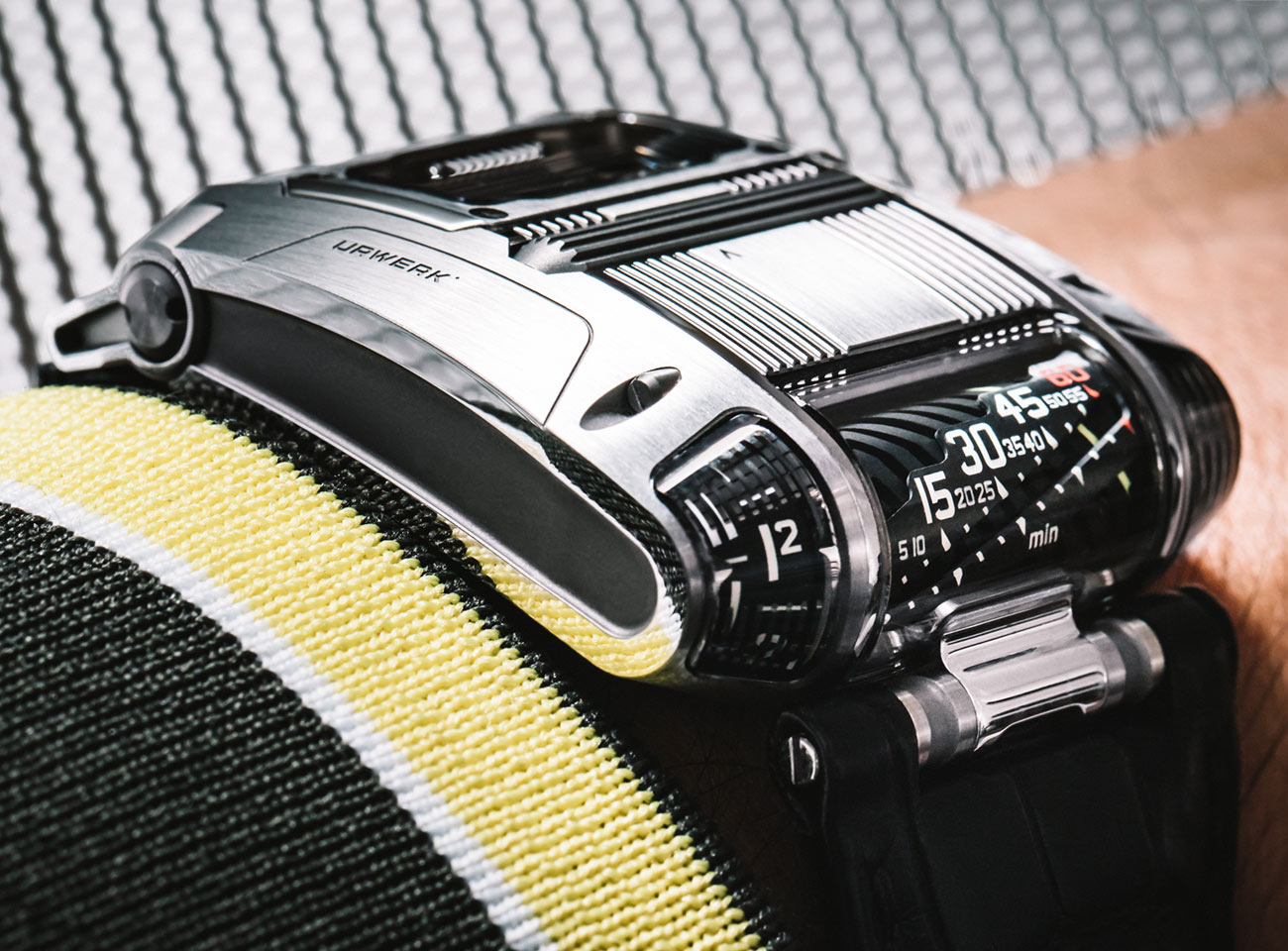 This is all totally over-complicated and unnecessary anyway, but you could say the same thing about any luxury watch, or even any watch, probably. But, in my imagination at least, someone will one day be designing a space station hangar door or the like and actually be able to refer to Urwerk’s engineering solutions for some kind of practical, crucial application. In the meantime, the Urwerk UR-111C is a super cool watch just to exist, to learn about, and for a few eccentric billionaires, to maybe actually own, wear, and fiddle with. The Urwerk UR-111C is limited to 50 pieces, 25 in polished steel and 25 with a gunmetal finish, with a price of 130,000 CHF each. urwerk.com