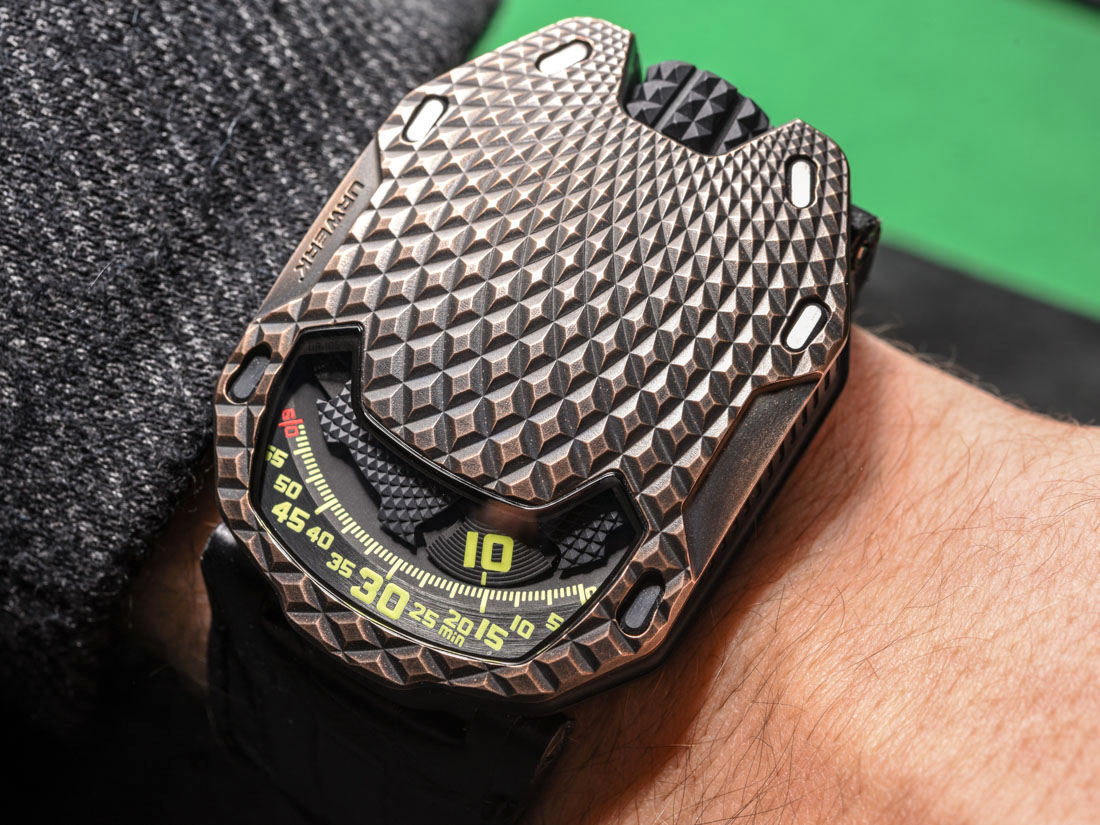 Established in 1995 by brothers Felix and Thomas Baumgartner, Urwerk has steadily gained recognition over the years for their unusual and boldly designed watches. Their first major release was the UR-103 in 2003. The UR-103 was notable because it combined the centuries-old wandering hour complication with a truly avant-garde case design that was unlike anything else available at the time. The UR-103 would lay the foundation for the later UR-105 and, subsequently, the Urwerk UR-105 T-Rex that we see here. 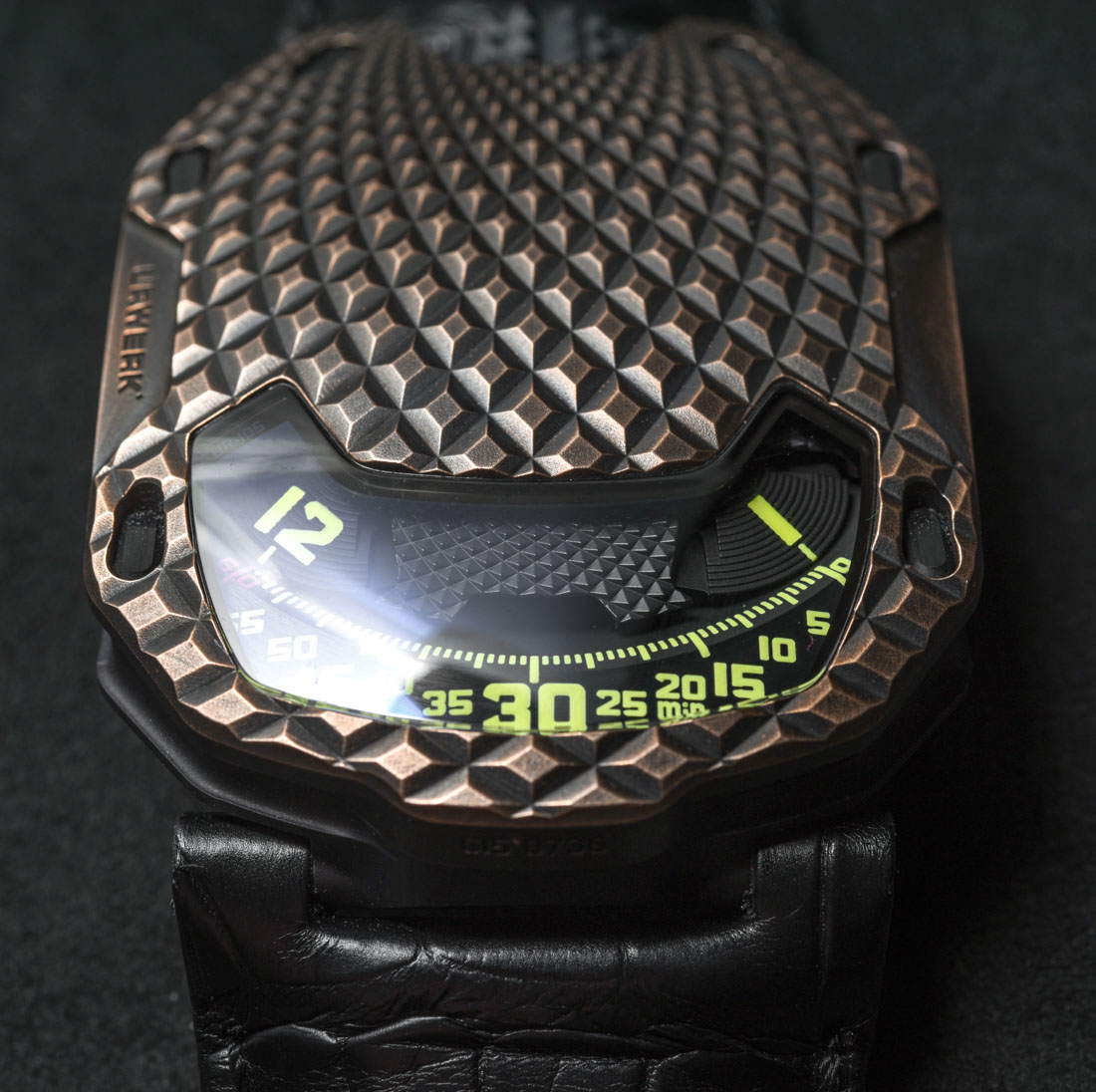 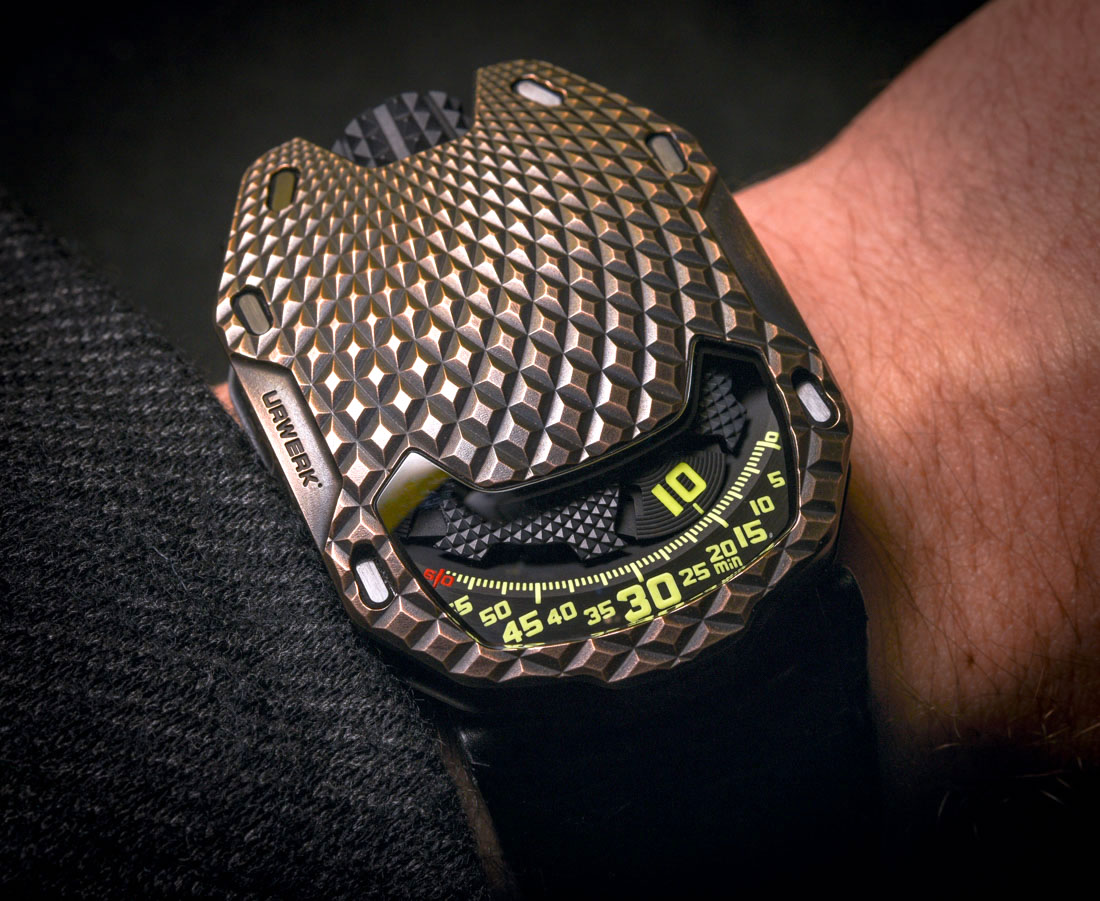 A large part of that has to do with its case. The UR-105’s case shape is already quite unconventional, but the Urwerk UR-105 T-Rex takes things a step further by using bronze, and further, the case is finished with what seems like a take on the popular Clous de Paris pattern. The texture originates as small pointed triangles at the top of the case that become larger as the pattern makes its way downwards, finally culminating in small flat-top pyramids. But it doesn’t stop there, as the bronze case is then intentionally patinated and hand-finished to create a very rugged and worn look. The process, I’m told, is pretty laborious, requiring machining, bead-blasting, sand-blasting, and oxidizing steps, all before some really extensive hand-finishing. 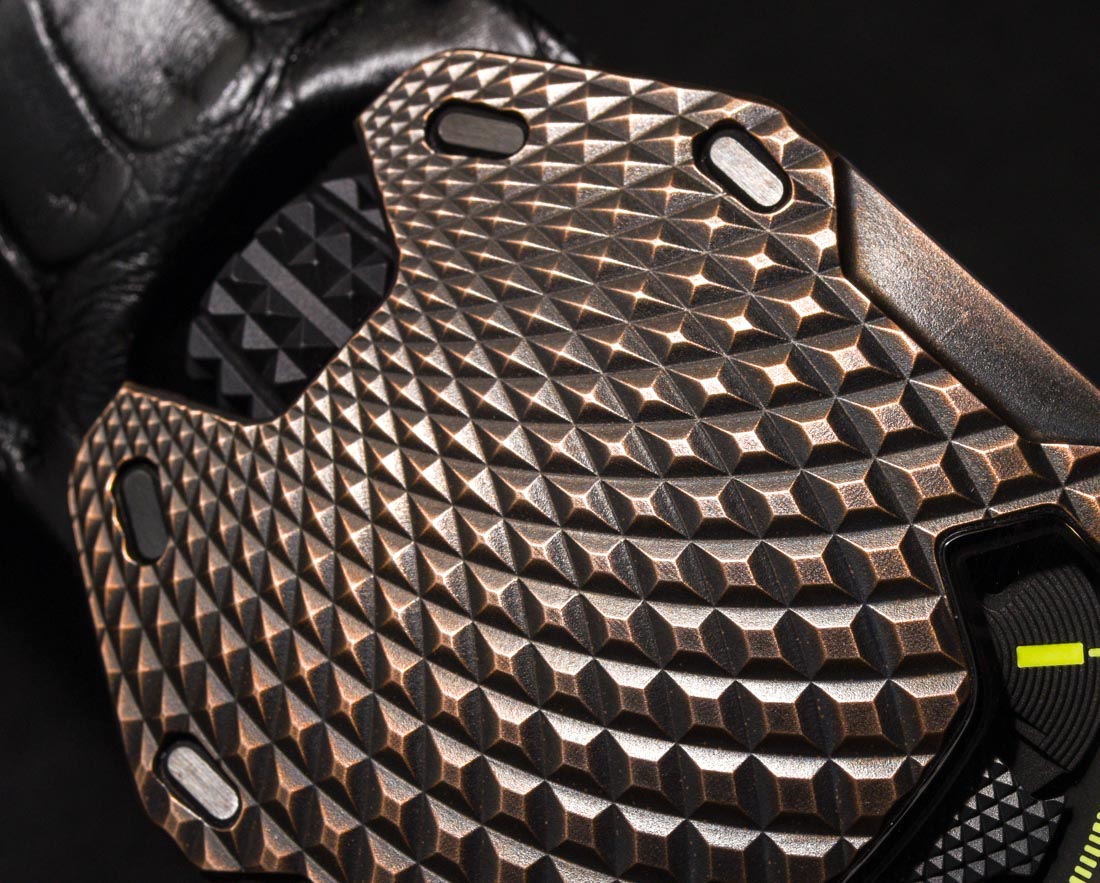 In the flesh, the Urwerk UR-105 T-Rex is a visually arresting watch. It is quite a large watch to begin with, at 39.5mm wide, 53mm from lug to lug, and almost 17mm thick, but the exquisitely finished bronze case is the real highlight here. After all of the extensive hand-finishing work, the bronze case takes on a dark gold hue with a green tinge, which is really quite special and unlike any other bronze patina that I have seen. It reminds me of tarnished brass joss stick pots that you sometimes see at Buddhist temples. 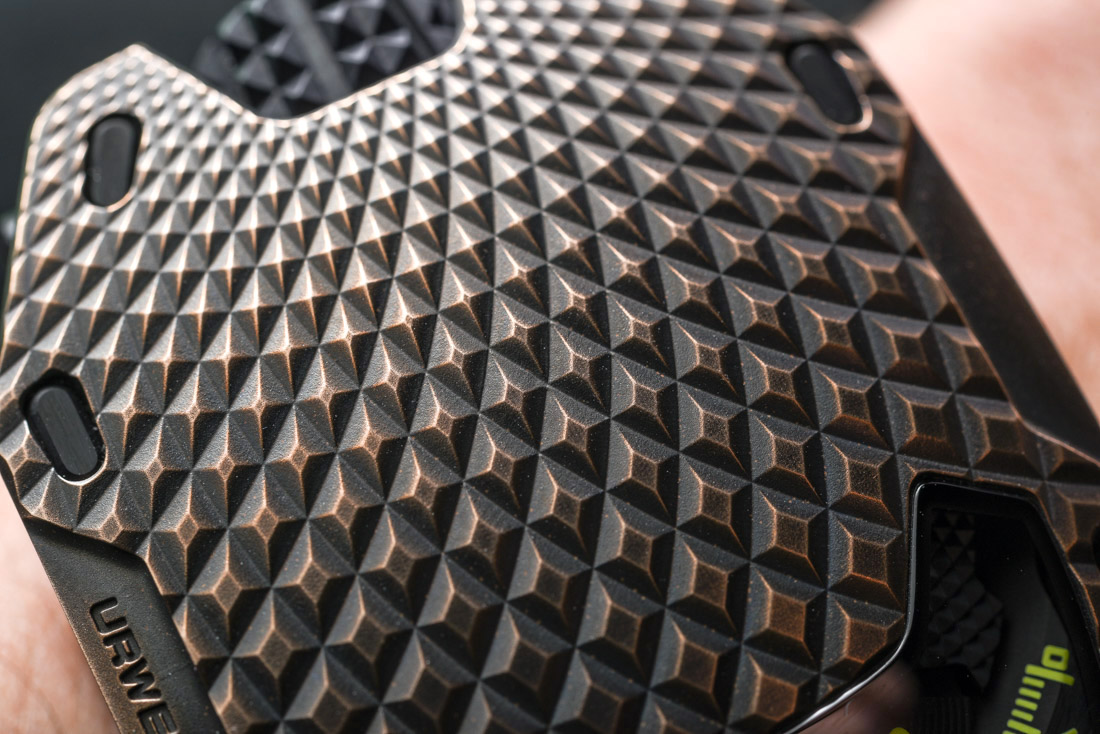 To my eyes, it is instantly apparent where the watch got its name from. The unique hobnail pattern instantly calls to me the scales of a Tyrannosaurus rex, or at least what I imagine a “T-Rex” would look like. From afar, the raised patterns easily resemble the scales of reptiles, but more importantly, it is a really unique and attractive look. 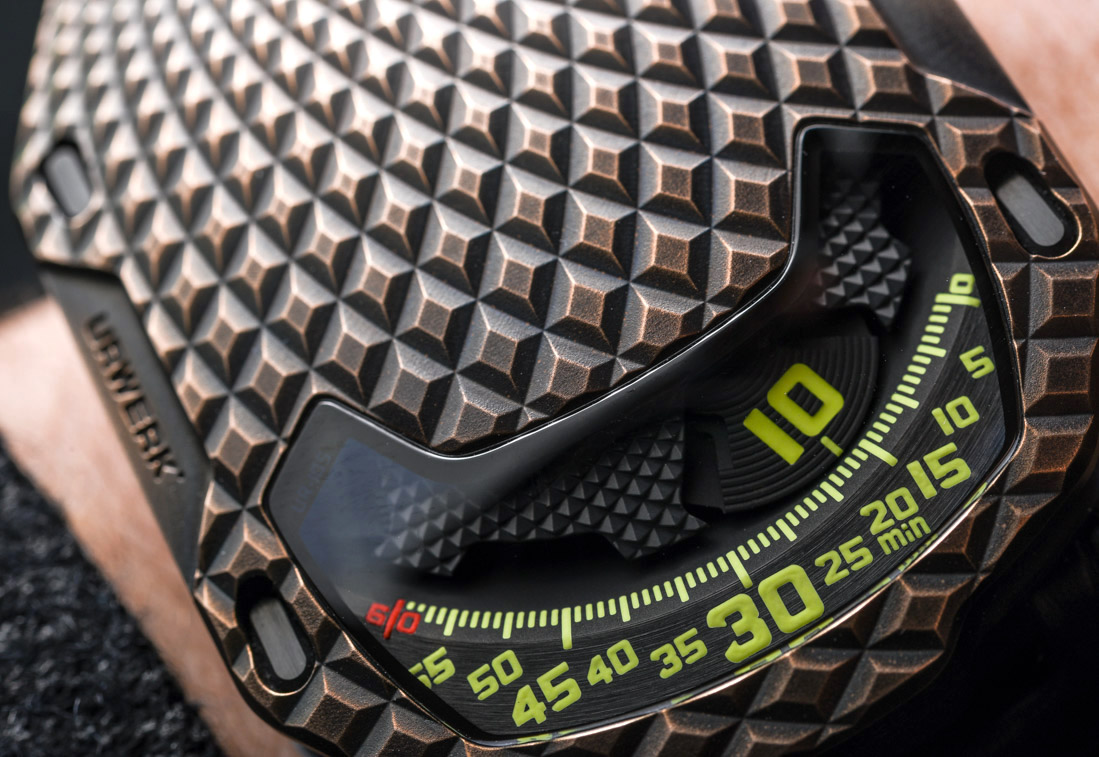 Time is read by an aperture at the bottom of the case. The numerals and minutes track is painted in bright green Super-LumiNova. The hours are indicated on the wandering satellite hands, and the minutes are read simply by looking at the position of wandering hours satellite in relation to the minutes track. For example, in the photo above, the time is about 10:17. It is really easy to tell the time once you get the hang of it. 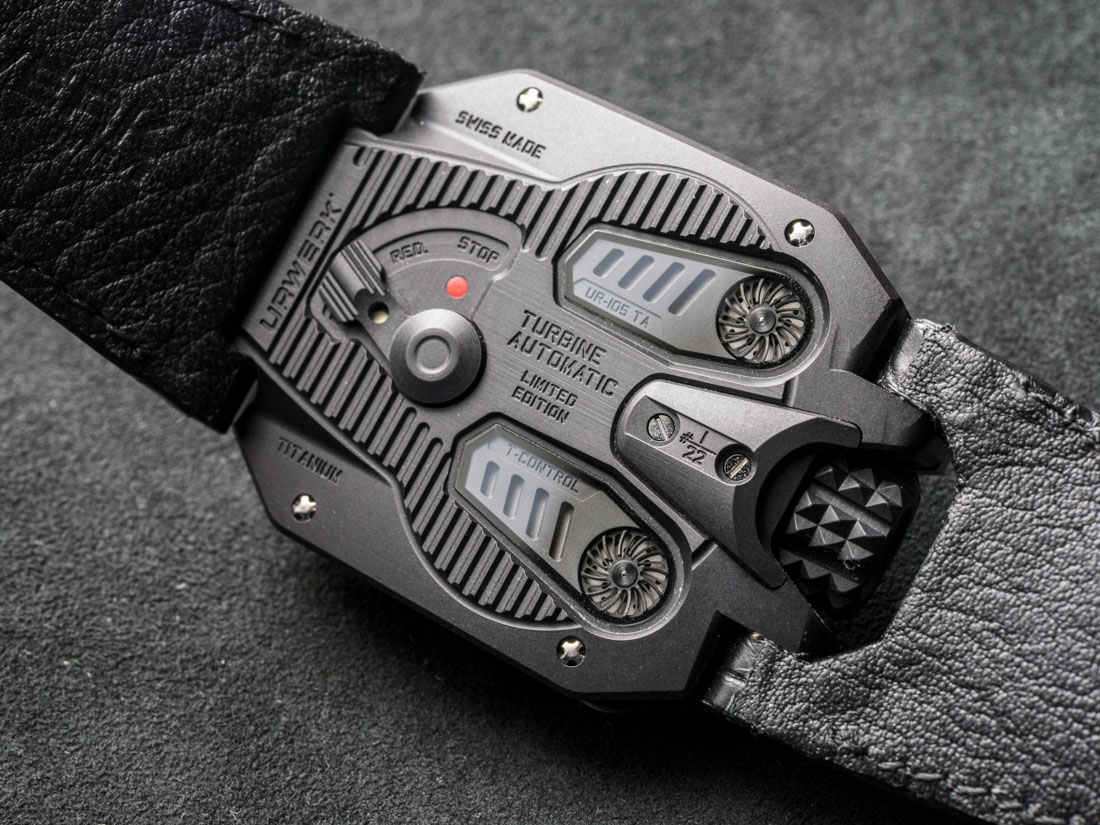 The case back of the Urwerk UR-105 T-Rex is considerably less exciting and looks more or less like a standard UR-105 watch. But remember, your standard UR-105 watch still looks nothing like any other watch. Here, the case back is made of titanium coated with black ceramic. And you also see two turbines near the large crown, which, by the way, features the same hobnail pattern as the bronze case. Near the bottom, there is a winding lever that adjusts the winding efficiency of the watch. 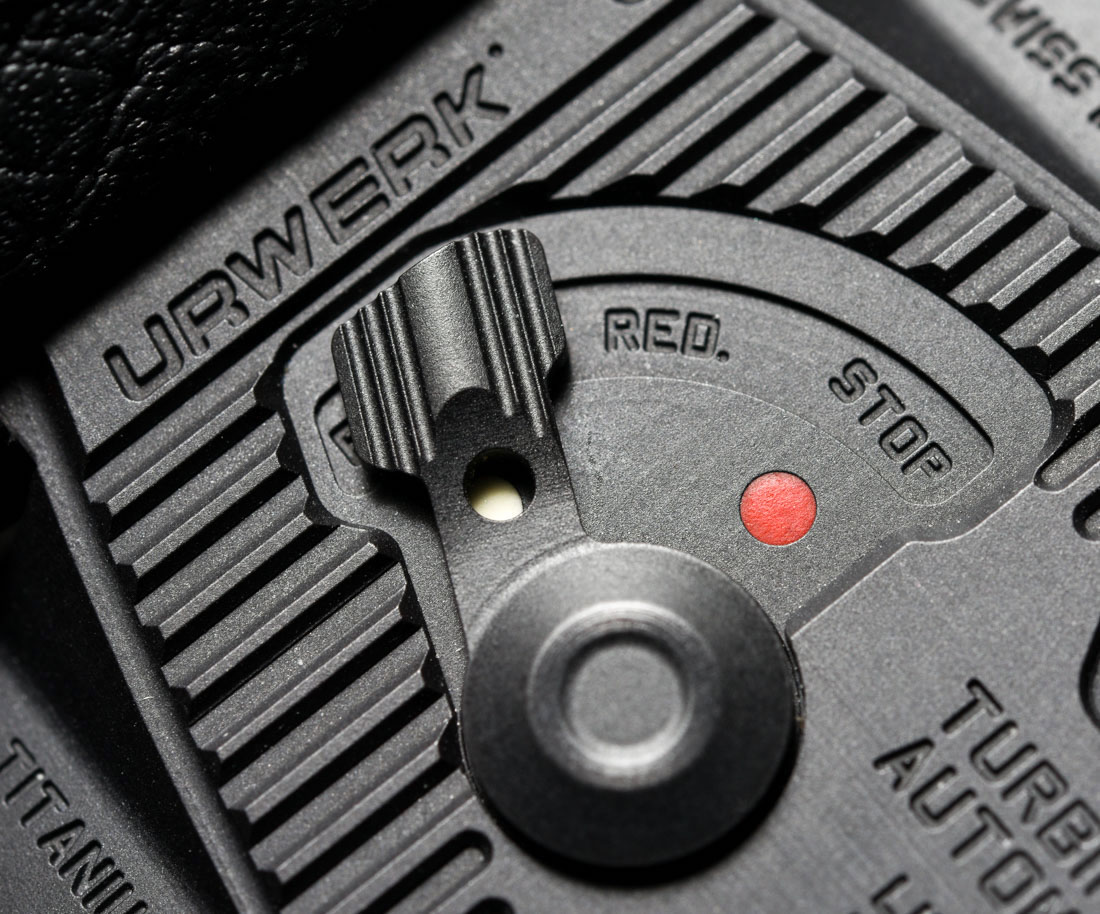 There are three settings: Full, Red, and Stop. Full means the automatic winding mechanism will operate at full efficiency, so even if you are relatively inactive, the watch will still be able to wind itself. Red is for more active individuals. And Stop is self-explanatory. Honestly, this feature doesn’t serve any real purpose, but is ostensibly to protect the movement from extremely vigorous activity. It will likely be quite fun for owners to fool around with the winding lever and find out for themselves just how active or inactive they are. 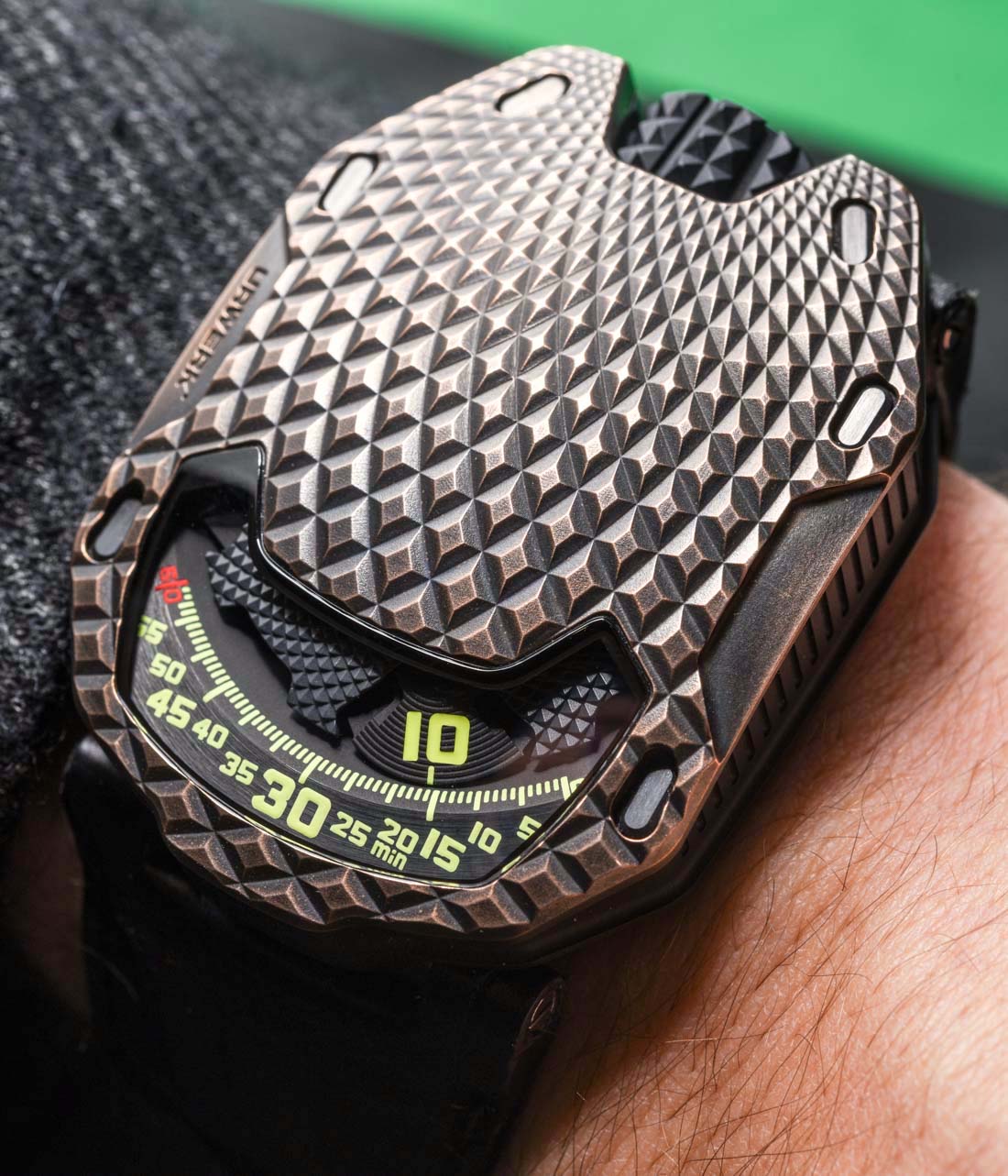 My only gripe with the Urwerk UR-105 T-Rex is that much of the Calibre UR 5.02 movement is obscured, unlike the other UR-105 variants where the satellite system is exposed on top for the wearer to admire. Still, I suppose that’s a minor sacrifice for the quirky and exceptional bronze finish of the UR-105 T-Rex. The Urwerk UR-105 T-Rex is limited to just 22 pieces and is priced at 65,000 Swiss francs. urwerk.com