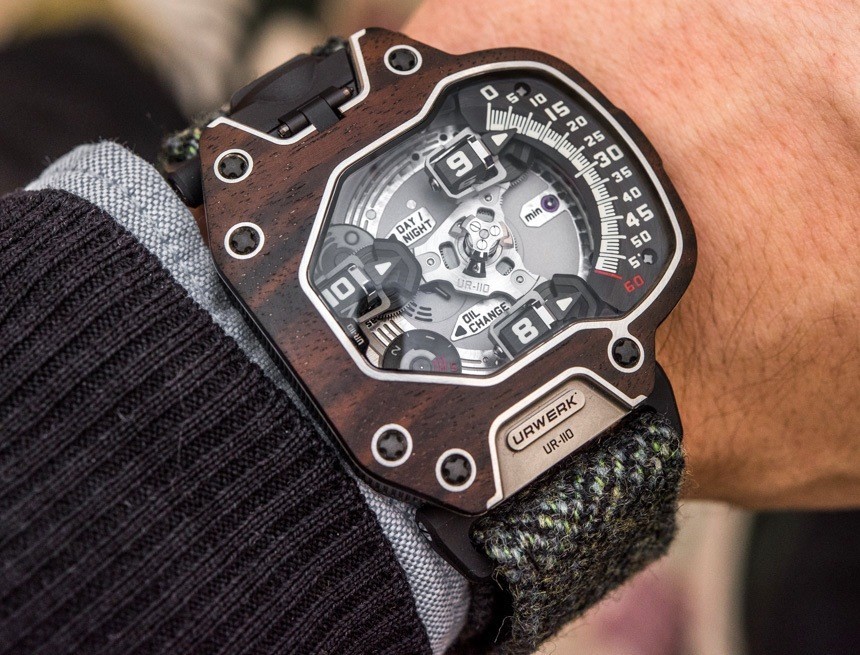 The Urwerk UR-110 Eastwood is the latest – and reportedly final – iteration of the award-winning UR-110 “Torpedo,” which turned heads and blew minds when aBlogtoWatch first wrapped it around our wrists back in 2011. Thankfully, the Swiss horological wizards at Urwerk are giving the UR-110 a proper send-off with two exclusive limited-editions marrying titanium industrial design, exotic wood, and British tweed, yielding a natural, texture-rich combination that borders on “vintage” and admittedly works far better than it should. Sure, true to Urwerk form, it still looks like it fell out of the cockpit of a spaceship, only this spaceship has a wood grain dashboard, horizontal speedometer, and a braided leather control column. 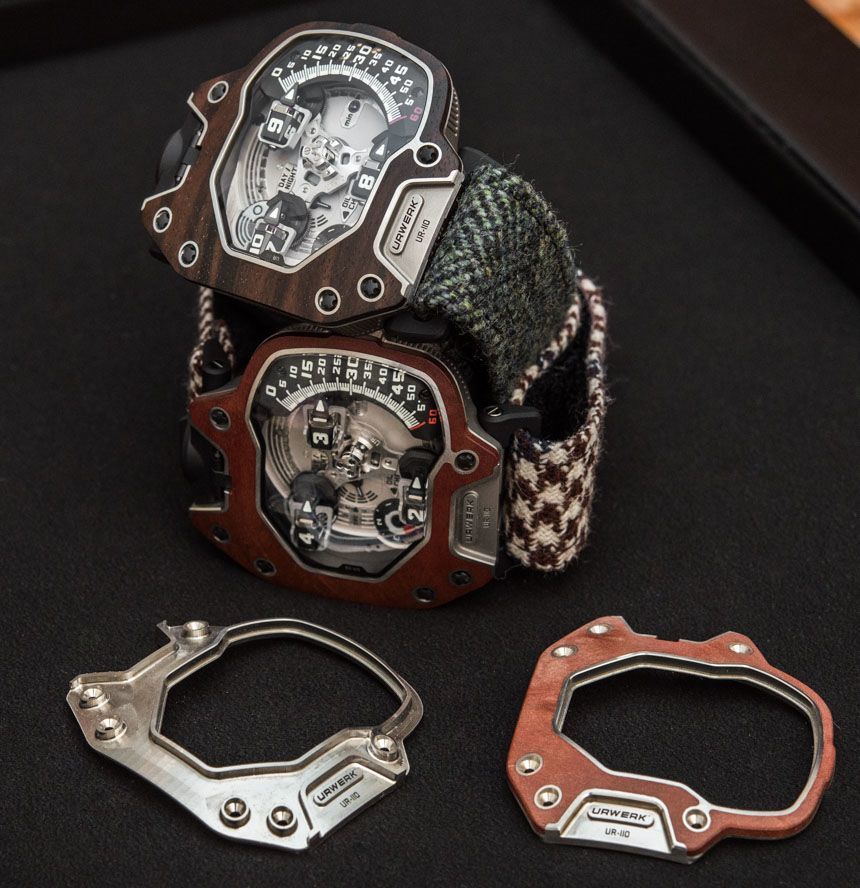 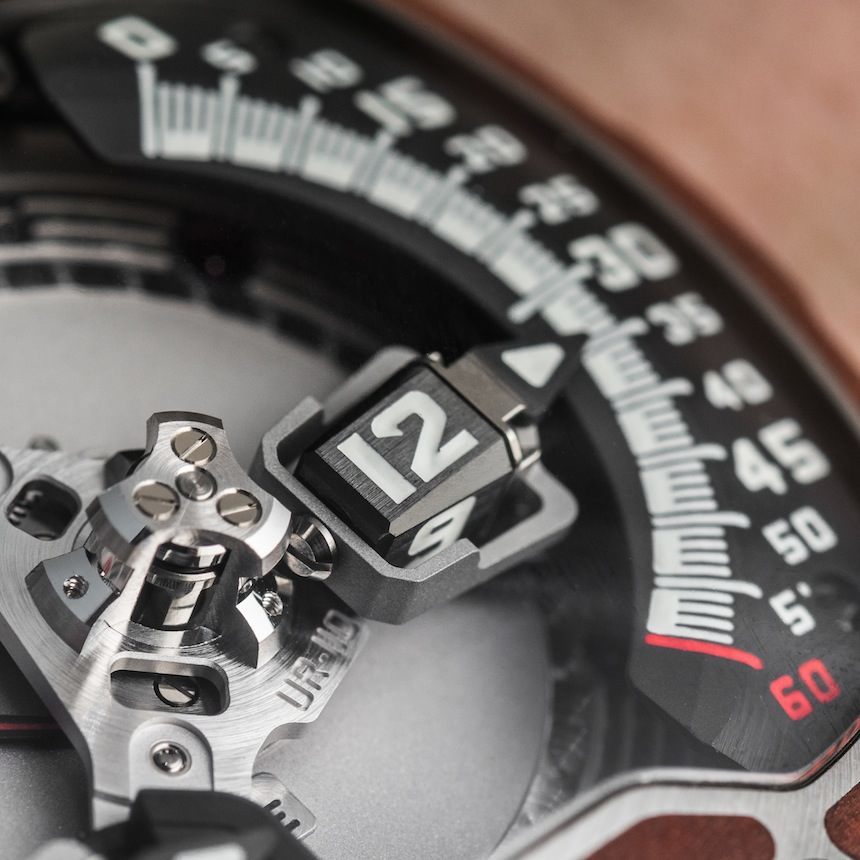 The Urwerk UR-110 Eastwood marks the return of Urwerk’s radical asymmetrical case design (the same Ariel once called “a mutated ninja star,” even though it clearly looks like a wrist-mounted grappling hook launcher, but that’s probably beside the point), and again employs the same orbiting satellite complication whose arrow-shaped torpedoes display the time on the 3:00 side of the case, as opposed to 6:00 in the symmetrical 105 and 210 series editions. The dial layout is also entirely unchanged from the 110’s other editions, meaning the AM/PM and “Oil Change” indicators – the latter of which, of course, represents Urwerk’s service interval language – are both present. Flip the watch over, and you’ll see the familiar dual turbines which are linked to the automatic winding and are visible through two circular apertures for that added show. 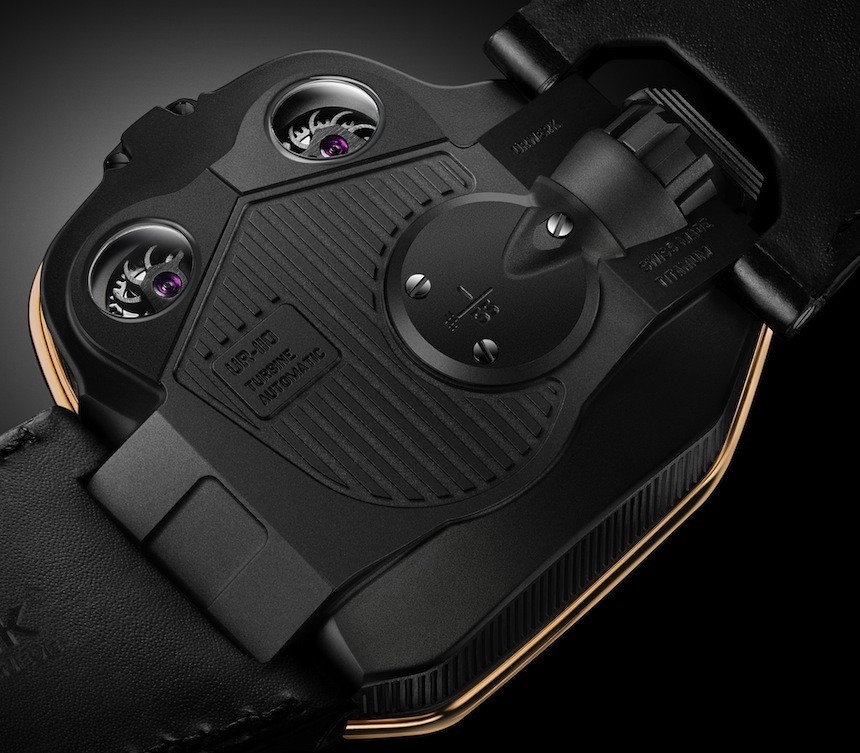 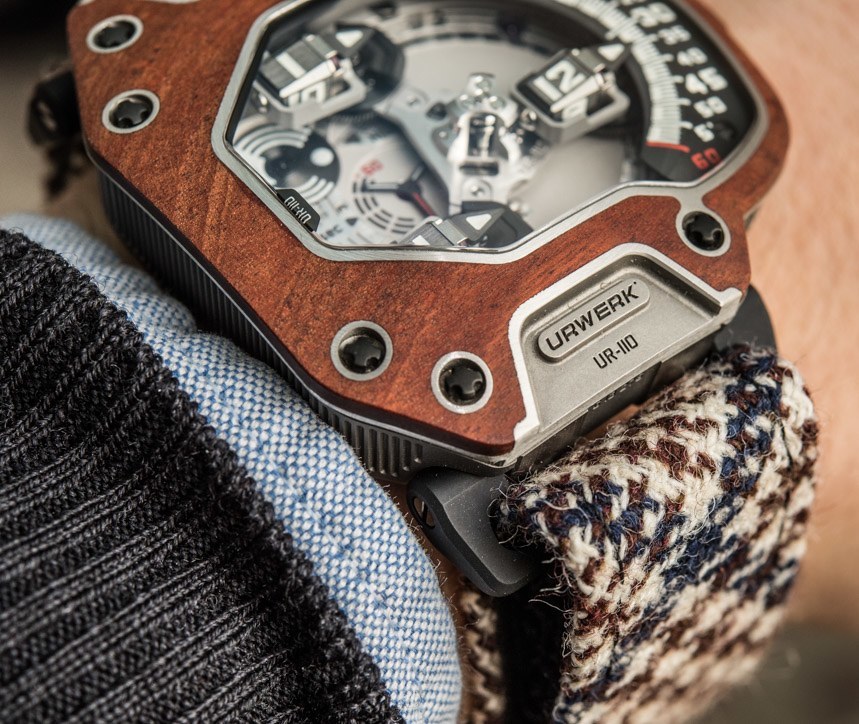 As mentioned, the Urwerk UR-110 Eastwood is the final iteration of the 110 series, and for this swan song, Urwerk reached into its deep bag of fabrication tricks for an unusual choice of material: wood. But since this is to be used on a watch more inspired by space-age design than traditional horology, it’s not just any wood. The Urwerk UR-110 Eastwood is available in two editions of only fifty-five pieces each; one with a polished Red Ebony faceplate, and the other with a faceplate hewn from Macassar Ebony – a dense, streaky, dark brown-colored wood that has been a woodworkers’ favorite for centuries. 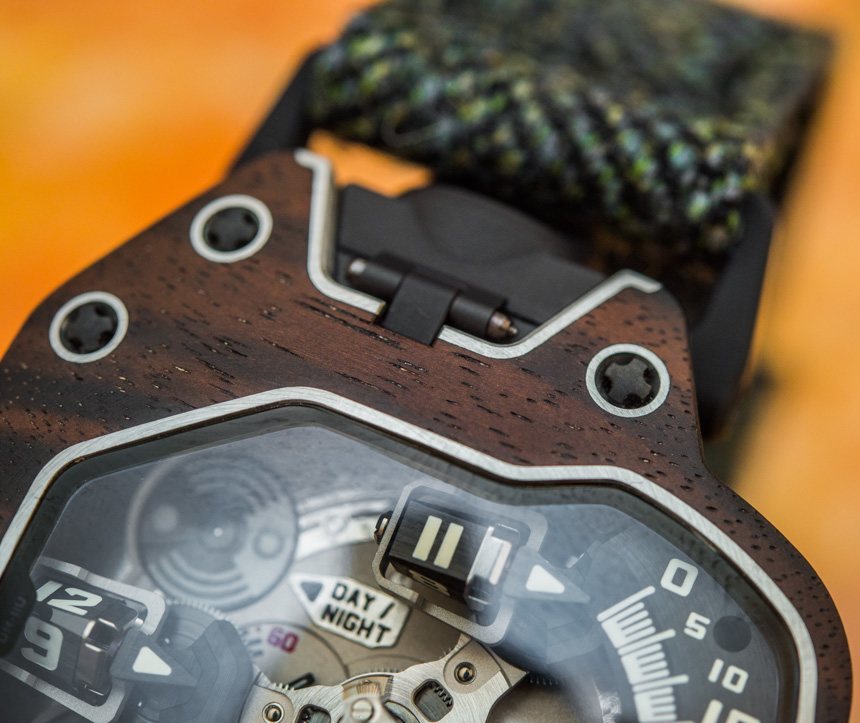 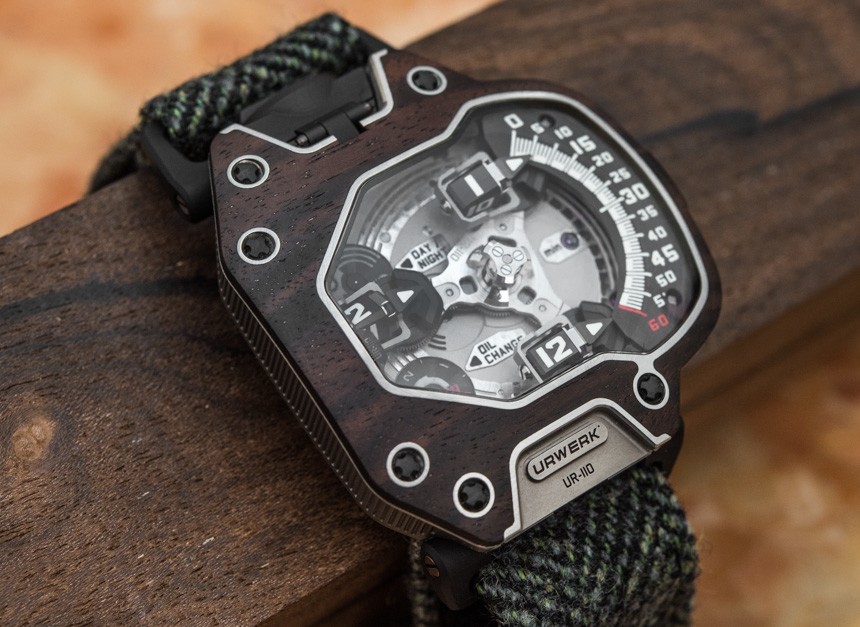 While the Red Ebony gives off an odd burnt orange hue, the Macassar Ebony with its rich, earthy tones looks exceptionally cool against the matte gray titanium case – I’d even go so far as to say this is definitely the more “powerful” looking version of the two. However, those with deep pockets and indecisive proclivities can rest easy knowing the bezel plates should be relatively easy to replace, with the removing of Urwerk’s signature chamfered screws. 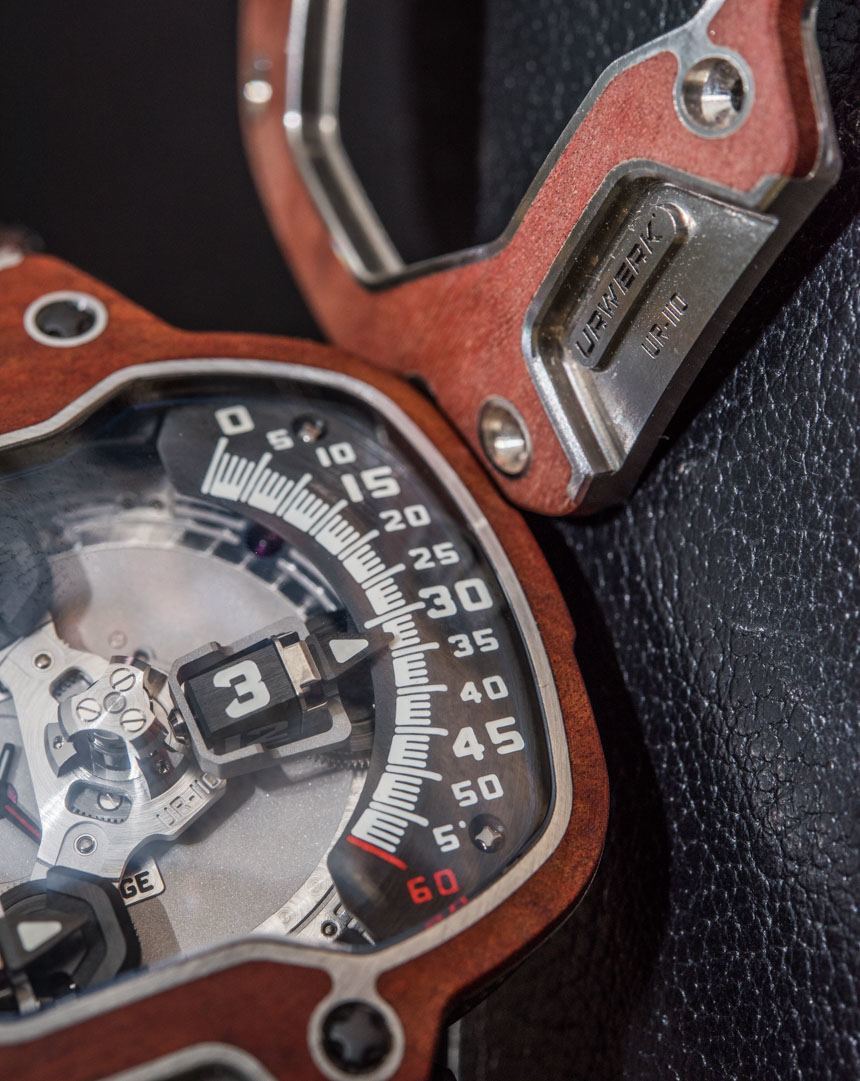 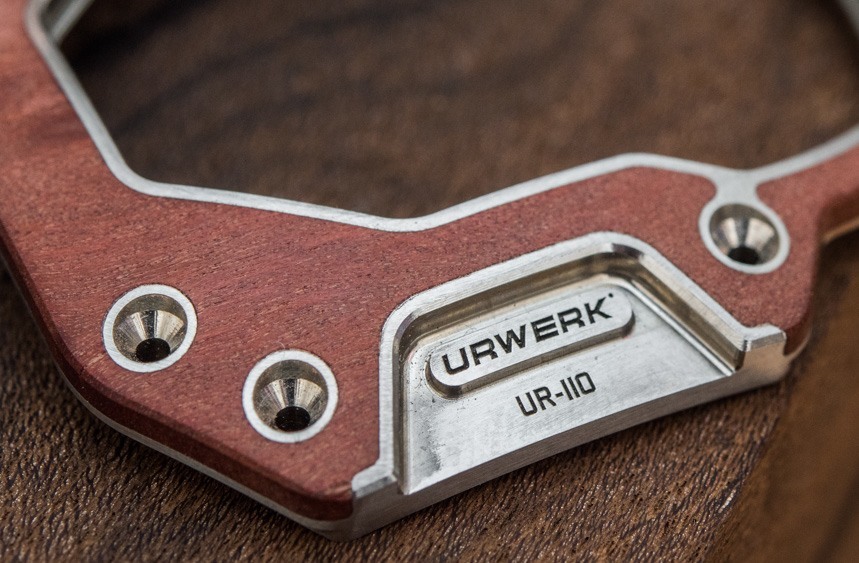 But perhaps most interesting about Urwerk’s choice to use wood, beyond the goal of *ahem* “nailing” a certain classical aesthetic, was the added challenge of working with ebony itself, which happens to be as difficult as certain types of steel to machine. In fact, according to Urwerk co-founder Felix Baumgartner, machining the plates wore out drill bits as if they were machining steel. Laying the Urwerk UR-110 Eastwood on its side probably exhibits this craftsmanship the best, as the faceplate carries a gentle, uniform curve from end to end, neatly matching the curvature of the panoramic sapphire crystal. 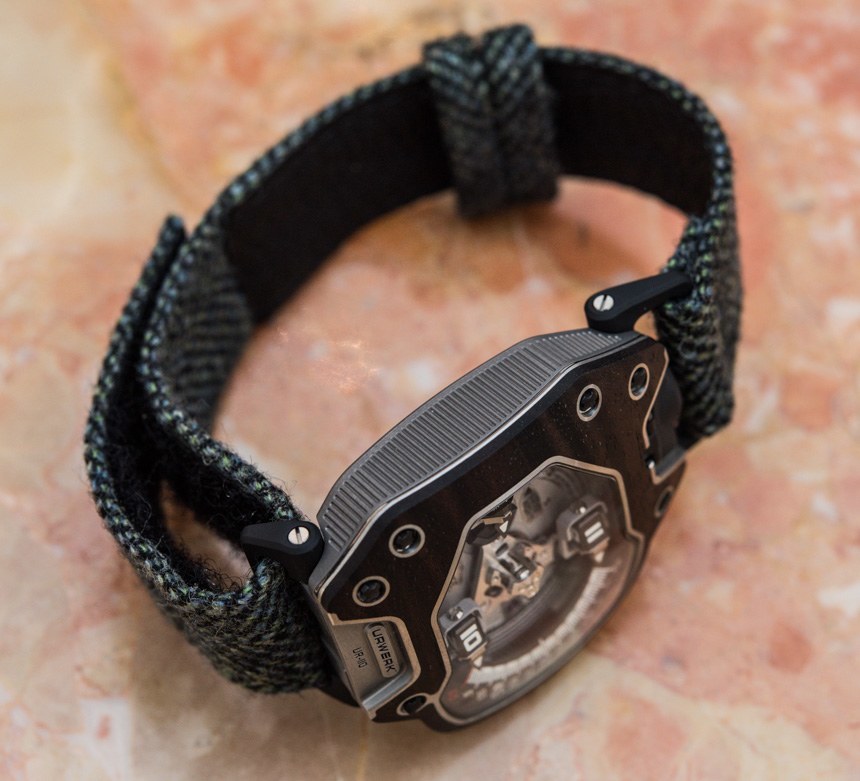 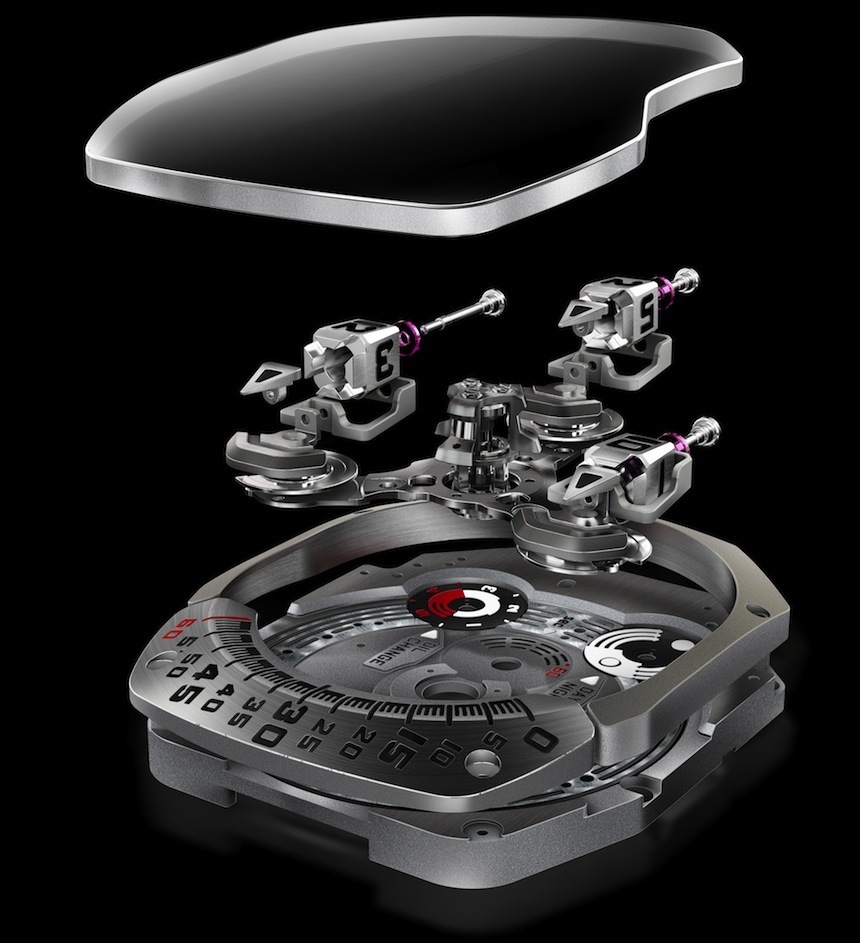 Like the past editions of the Urwerk UR-110 we’ve seen (including editions dating all the way back to 2011), the Urwerk UR-110 Eastwood is powered by Urwerk’s UR-9.01 self-winding movement, meaning any differences with the Eastwood edition are entirely cosmetic. That is pretty much OK, though, as the rotating satellite torpedoes are no less impressive today than they were five years ago – fascinating and novel concepts that age as well as the time indication system in Urwerk’s watches are few and far between. So while the overall “wow” factor of the watch is somewhat diminished in the use of this same movement when compared to other Urwerk UR-110s, it’s also a welcome familiarity that allows the new materials and textures to shine here. 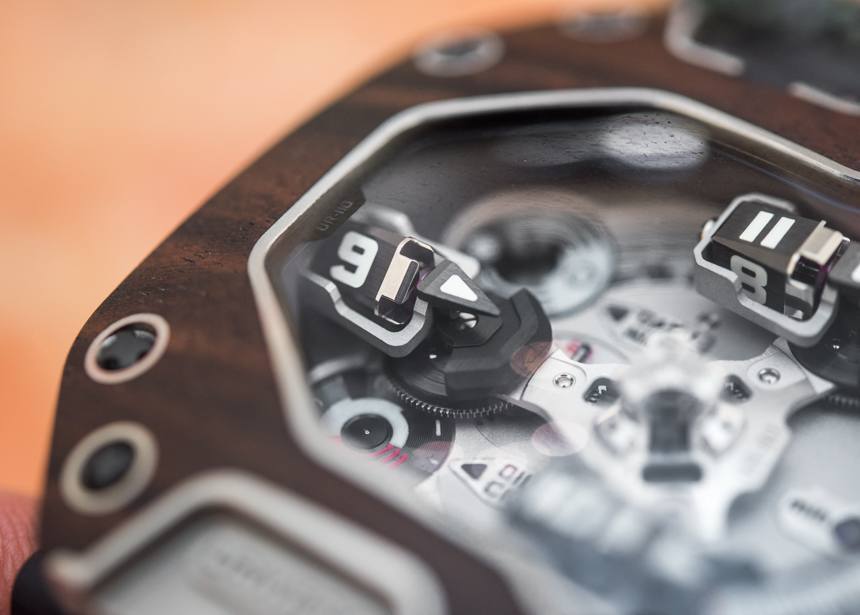 There’s no denying that the vintage redux continues to be the hottest thing in watchmaking right now. Even Urwerk’s hyper-futuristic design language couldn’t resist taking out a slice of yesteryear’s trends; except, rather than go full-steampunk, designer Martin Frei took a more conservative route with the wood faceplates, and matched them with a series of bespoke wool tweed straps made in collaboration with renowned Savile Row tailor Timothy Everest. Of course, leather has long been the strap material of choice for Urwerk – apart from this genuinely impressive-looking steel bracelet version of the UR-210s (hands-on here) – but the added color subtleties and natural textures of the tweed help in camouflaging the watch’s presence on the wrist and diffusing the sheer complexity of the dial. Rest assured, this is a good thing; it might even be welcome news for those who’ve long been hesitant to join the Urwerk owners’ club and were looking for an Urwerk with a bit less spaceship and more country club vibe to it. 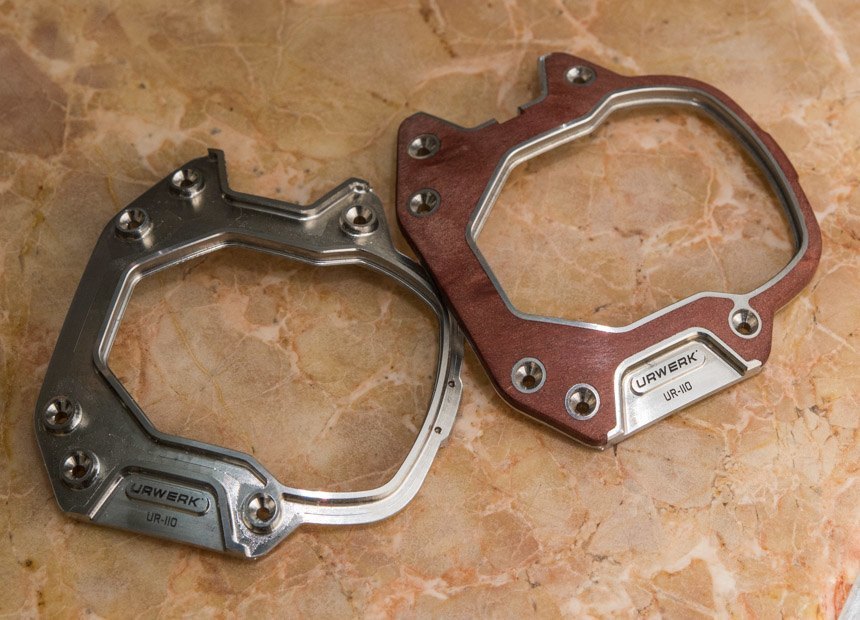 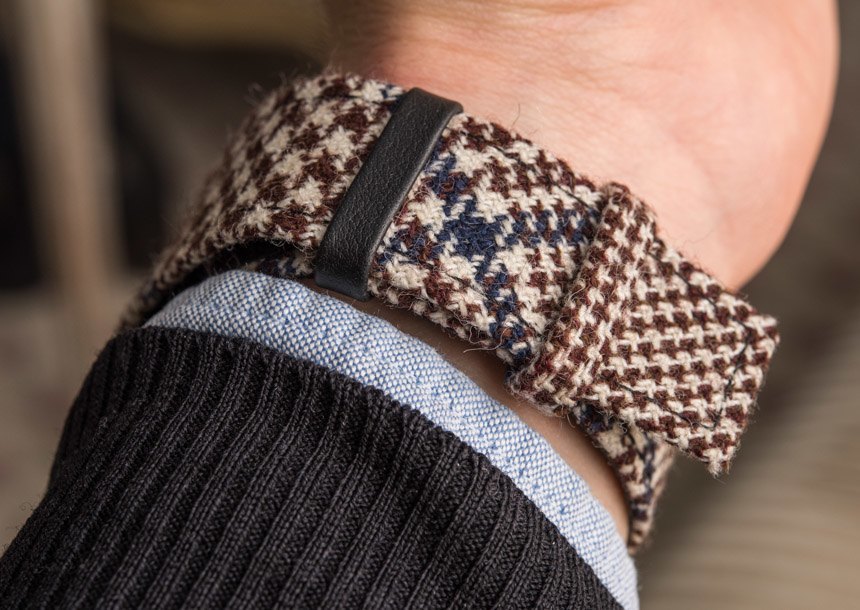 Each of the Eastwood editions will come with three interchangeable straps color-matched to their respective faceplate, including this brown and blue pattern on ivory fabric (better known as the original Prince of Wales check worn by the Duke of Windsor), which neatly matches the lighter colored Red Ebony faceplate. 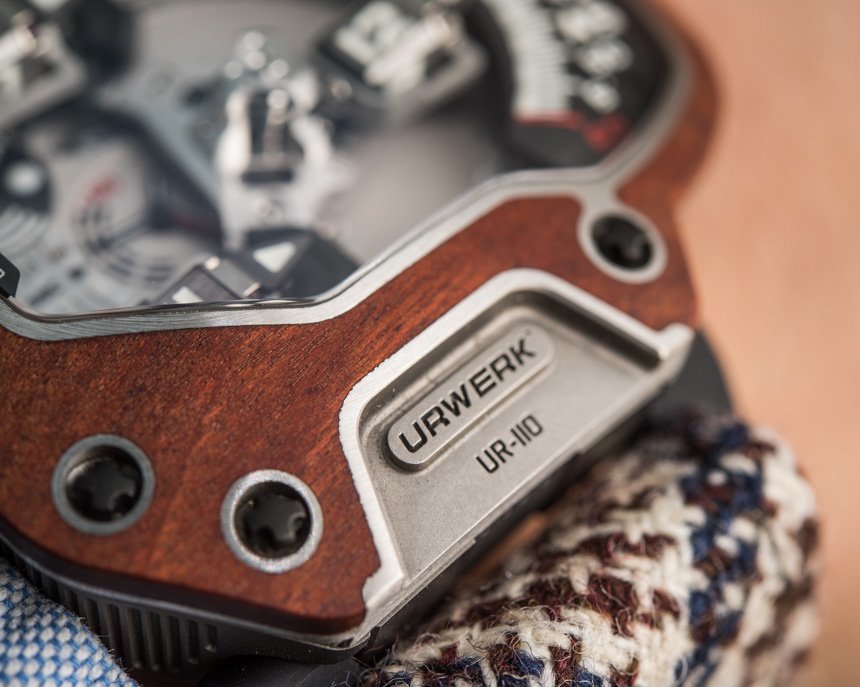 Before the Urwerk UR-110 Eastwood, the challenge of wearing an Urwerk wasn’t just limited to the cost of entry. The challenge was overcoming not only the dimensions, but perhaps the practicality and unusual aesthetics of the device itself – which could at times be difficult to wear with anything other than a Batsuit, lest it completely overwhelm your wrist. However, thanks to the natural hues of the ebony faceplates and the textured contrasting straps, this is arguably Urwerk’s most wearable execution currently available, and a watch that could easily be imagined sitting naturally — and regularly — against the cuff of a chambray or oxford shirt. That said, you’ll still have to get past the titanium case’s 47mm diameter and 51mm lug distance; a long shot for all but the most assertive wrists. 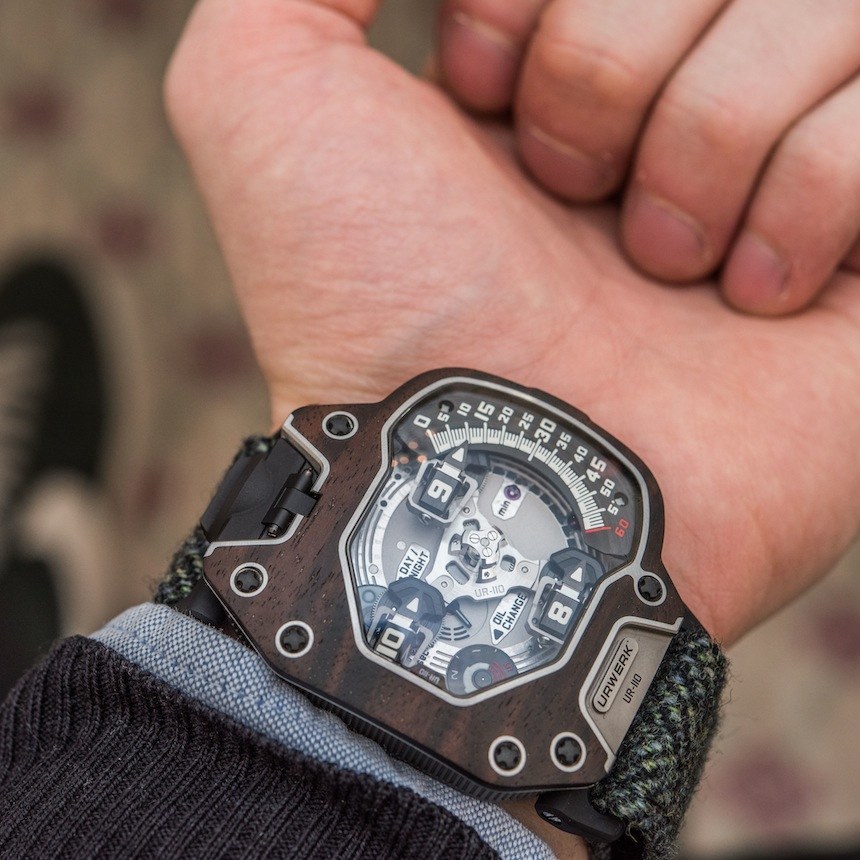 Does that mean we finally have an Urwerk that’s not just reserved for Bruce Wayne? Perhaps. However, you’ll still probably need his checkbook. The Urwerk UR-110 Eastwood will set you back right around $105,000. urwerk.com