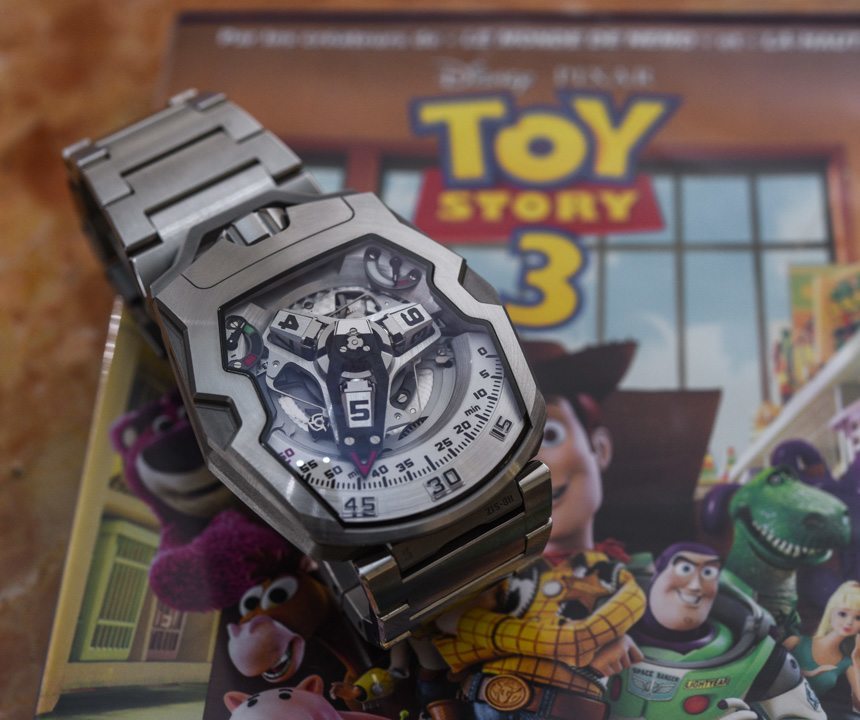 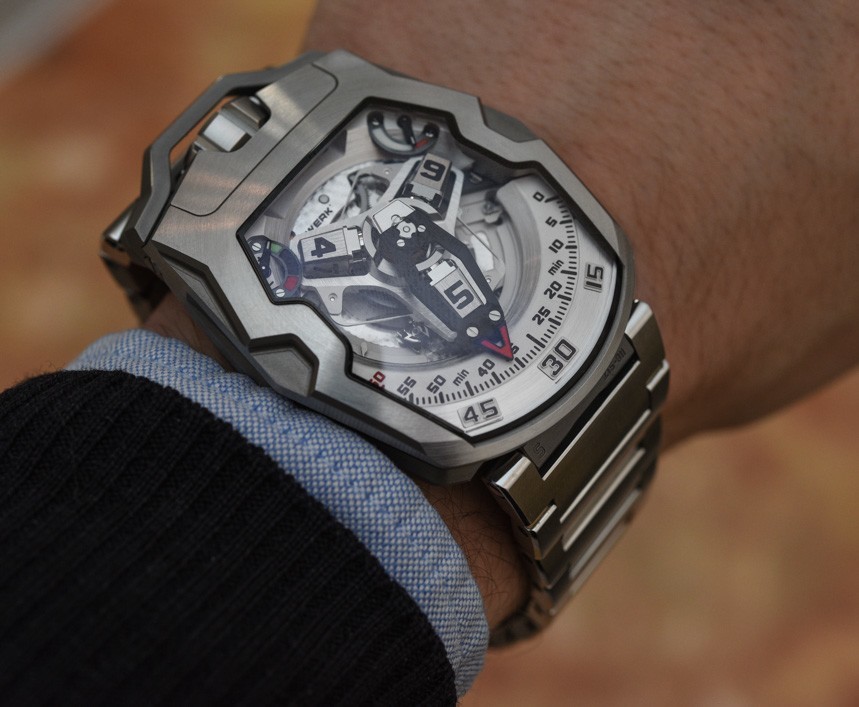 For 2015, Geneva-based Urwerk has finally created a new limited edition watch on a bracelet with the UR-210S “Full Metal Jacket.” The last (and first) time we got to see a cool Urwerk timepiece on a bracelet was in 2011, when Urwerk released the UR-202S Full Metal Jacket (hands-on here), which came in brushed steel as well as black-coated steel. Urwerk actually uses virtually the same bracelet for the UR-210S. Yes, it would have been nice to see them do a little bit of a different bracelet design, but at the same time, the Urwerk UR-202S watches were so limited, there is now a new opportunity for Urwerk collectors to enjoy one of the brand’s timepieces on a metal bracelet.

Good thing it is on a Urwerk UR-210 watch, since I love this piece. Ever since the Urwerk UR-210 was first released in 2012, it has been one of my favorite pieces from the brand for so well encapsulating the design and technical ethos of Martin and Felix of Urwerk. aBlogtoWatch first debuted the Urwerk UR-210 watch here, and later went hands-on with the UR-210 here. Last year in 2014, Urwerk released a black-coated version of the UR-210 as the UR-210Y (hands-on here) nicknamed the “Black Hawk.” Given Urwerk’s tendency to release watches first in naked steel or titanium and then coated in black, it is very likely that the Urwerk UR-210S Full Metal Jacket will receive a black-coated sister watch in the near future.

When we first debuted the Urwerk UR-210 watch, you may recall that we said it was a timepiece with a complication that reminded you to not be lazy. In a sense, it has a mechanical activity tracker similar in concept to the many electronic activity trackers people commonly wear today. If you aren’t a serious watch buff, it might be a bit complicated to explain. You need to understand that the movement inside of the Urwerk UR-210S watch is an automatic. That means it is powered by the movement of the wearer. On the dial of the watch is both a power reserve indicator as well as a “winding efficiency indicator.” This latter indicator is what I am referring to.

While one indicator tells you how much power (out of a total of about 39 hours) is left in the mainspring barrel to power the watch, the winding efficiency indicator tells you how efficiently you have been adding power to the movement over time. Basically, the more active you are, the more you are helping to wind the watch. Active people will see the hand in the green. Inactive people whose wrist motion activity is not enough to put power into the movement will see the hands in or closer to the red region of the dial. Thus, because it is essentially measuring the motion of your wrist, it measures an element of the wearer’s physical activity. 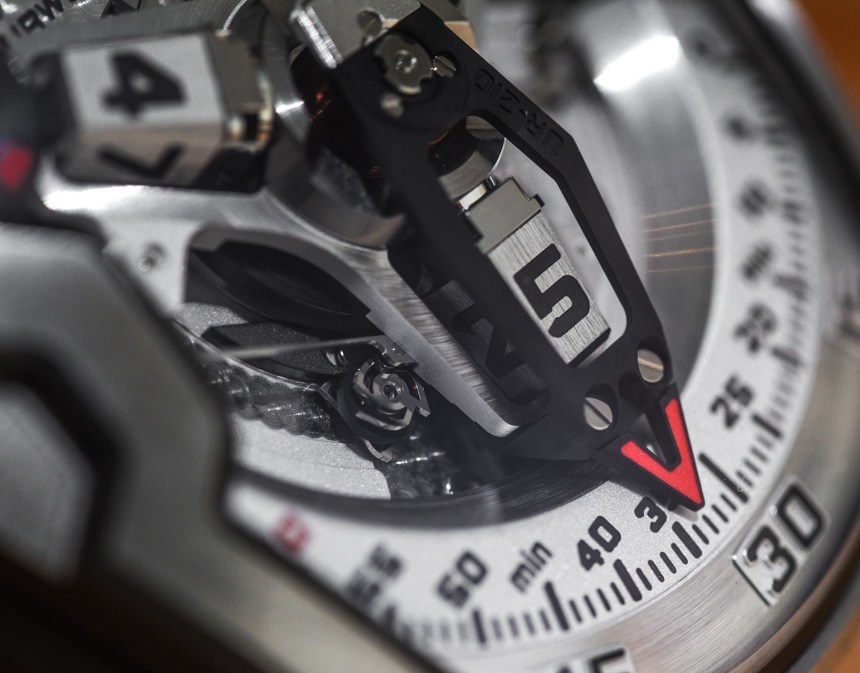 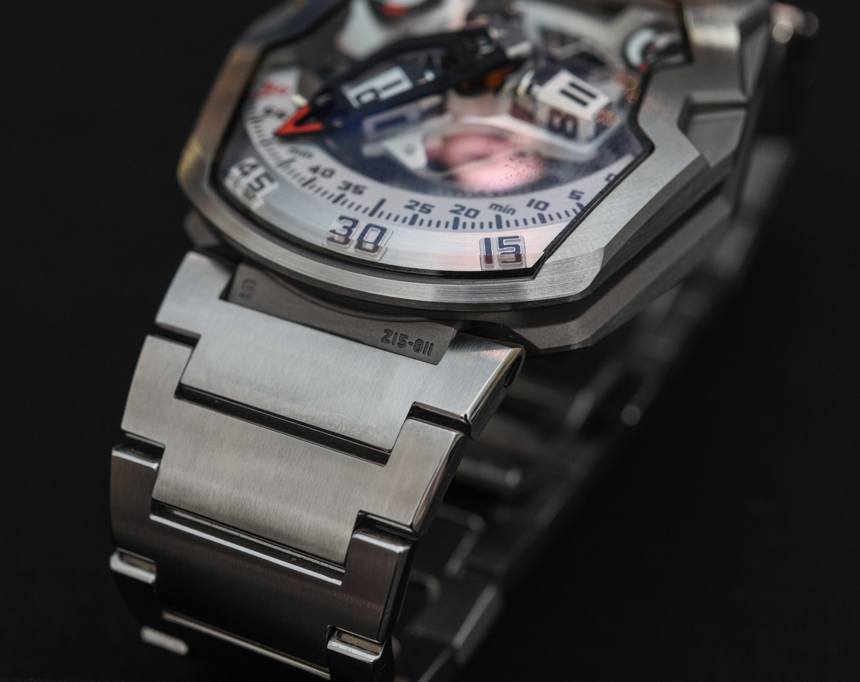 This is what I call “extra flavor,” and part of why the Urwerk brand is special and unique. Urwerk adds to their signature system of indicating the time with some of these other special complications – which is awesome, because it means that Urwerk doesn’t just do the same thing in a slightly different way with each new timepiece that they produce. What makes their satellite system for telling the time a bit different in the Urwerk UR-210 collection is the fact that the hand itself is retrograde and jumps back to its original position to meet the new hour indicator cube. As always, this system is incredible to see in action and wonderfully legible.

Inside the Urwerk UR-210S is the Urwerk in-house made calibre UR-7.10 automatic movement. Given that the automatic rotor is hidden, it would be difficult to know that the movement was an automatic at first glance if it was not for the spinning turbines on the bottom of the watch. While the main part of the Urwerk UR-210S case is in steel, the bottom of the case is in titanium. The several windows show turbines which are connected to the rotor that spin. There is also a small switch. This switch allows the user to either totally stop the spinning of the automatic rotor, or “reduce it.” 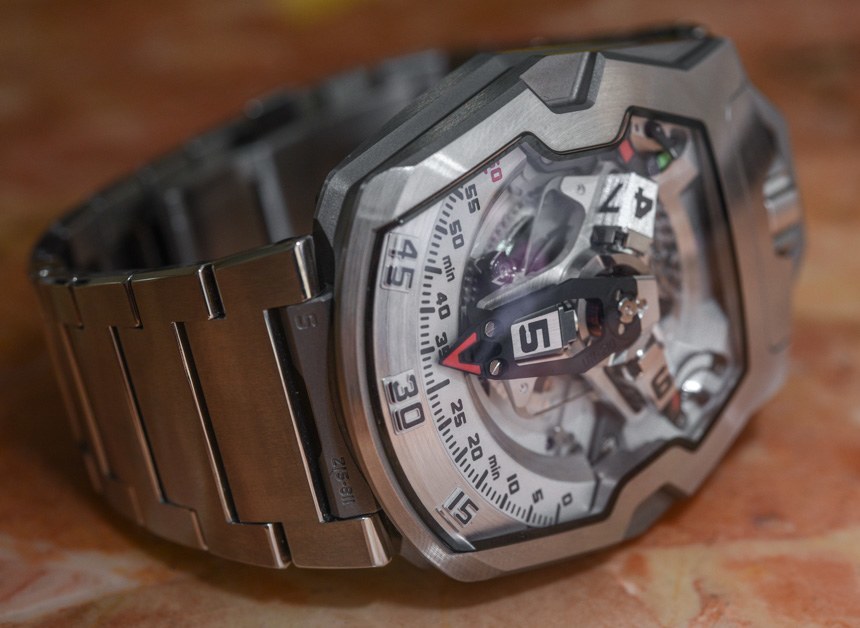 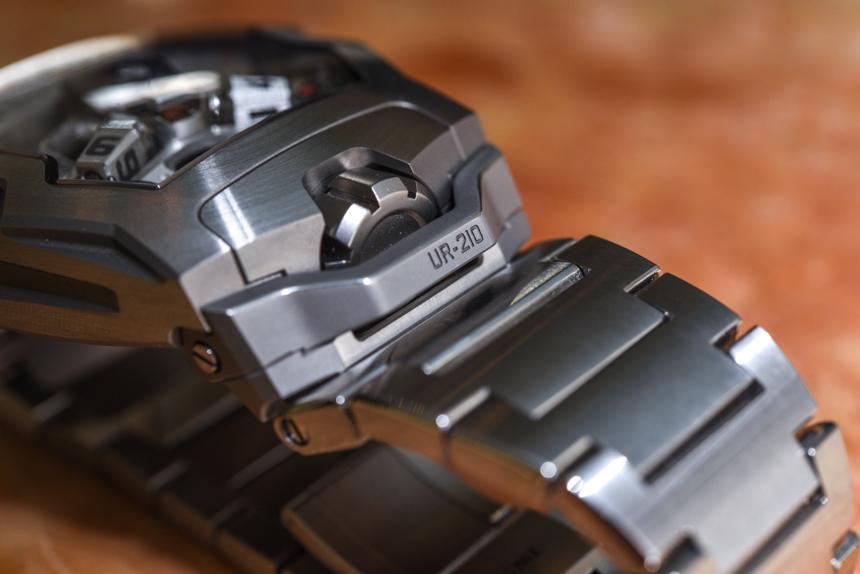 Pausing the automatic rotor theoretically helps protect the mechanical movement if it is subject to shock. I suppose that is true, but this isn’t a sports watch despite how modern and cool it is. The same theory applies to slowing down the automatic rotor by reducing its spin rate. Under certain circumstances, you are protecting the movement. It is really just a way to tweak and play with your watch. Urwerk really enjoys the idea of their timepieces being interactive and giving the wearer something to do – so the ability to mess with the functionality of the winding system plays into that. The movement also happen to operate at 4Hz. 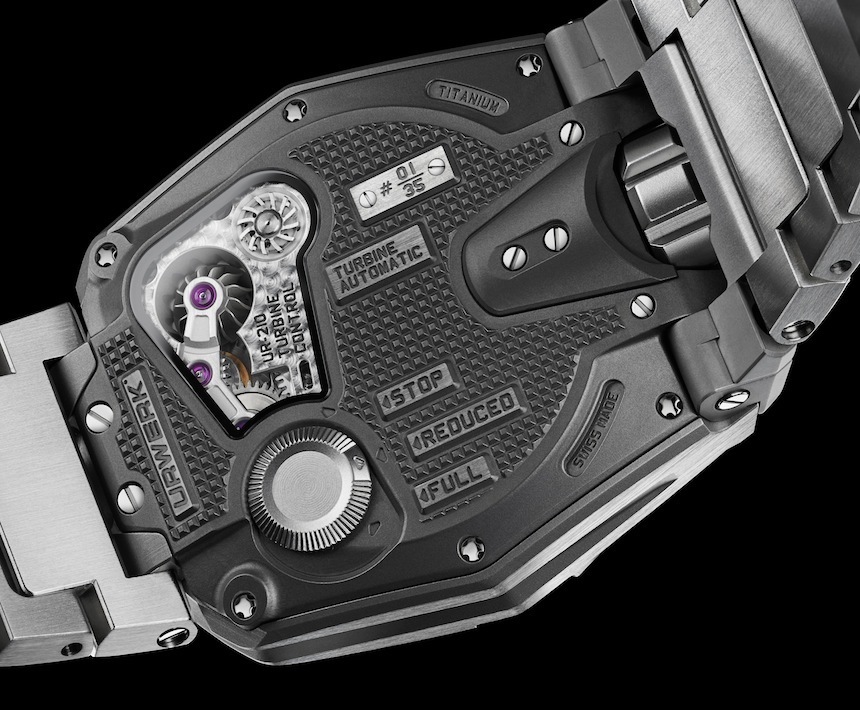 On the wrist, the Urwerk UR-210S is “only” about 44m wide, but the case is on the longer side, being almost 54mm long. There is one new element on the Urwerk UR-210S watch that wasn’t on previous versions of the UR-210 – which is a sort of crown protector that adds a curved bar element over the crown which is located at the top of the watch. You can see the watch on the wrist of aBlogtoWatch Managing Editor David who was taking the pictures of it while I did the video. We both felt that while, on paper, the UR-210S has strange dimensions, it does wear comfortably. Nevertheless, this isn’t going to be the type of watch that looks “normal,” which is the last thing you want when buying a timepiece of this ilk. 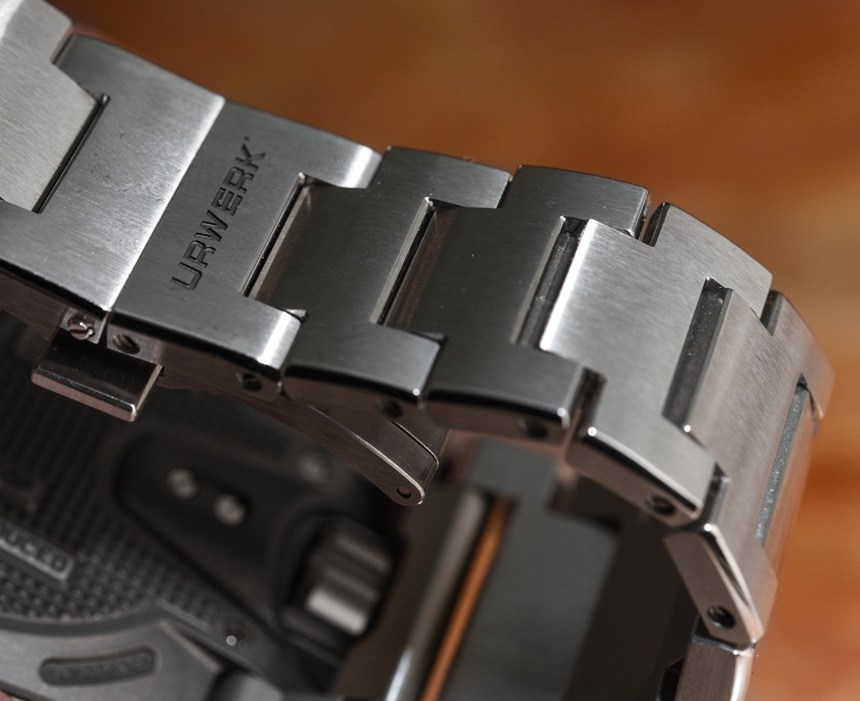 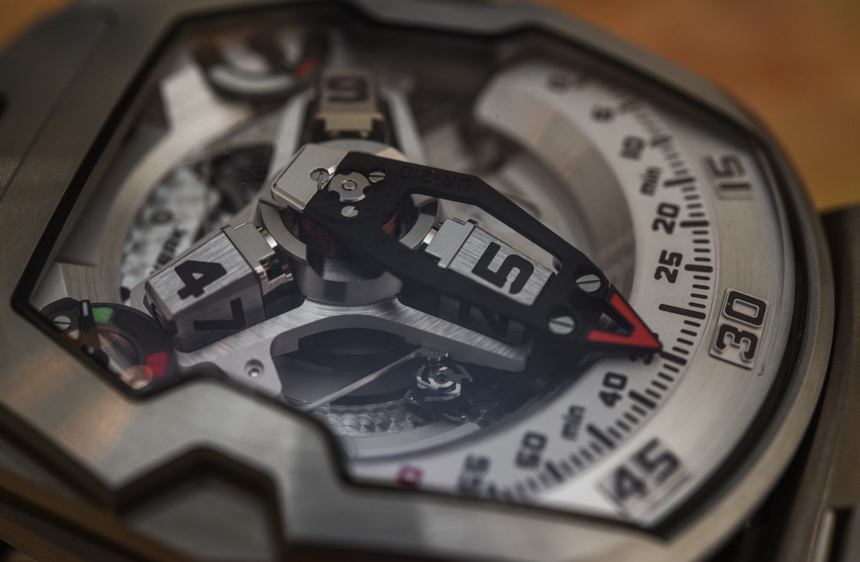 When Urwerk originally released the Urwerk UR-202S Full Metal Jacket on the bracelet, we commented that the bracelet had a rather striking resemblance to that on the Audemars Piguet Royal Oak. That is still true, but it does look good and isn’t exactly the same. Urwerk laments working with various suppliers trying to get bracelets in such small quantities. The bane of small watch makers is getting parts from suppliers who are mostly interested in high-volume orders because that is where the money is. For this reason, you rarely seen bracelets being made for small production watches – because they don’t have economies of scale on their side or willing production partners. So to have as nice a bracelet as the Urwerk UR-210S has is lucky enough for Urwerk and the brand’s fans.

With its cool looks that combine a very interesting case and amazing view of the dial with incredible intricacy, the Urwerk UR-210S is among the finest timepieces Urwerk has produced to date as part of the larger UR-210 collection. It is true that in a sense, the Urwerk UR-210S is a mere line extension, only adding a new flavor to the Urwerk family, though it is at least a flavor of something we really like in the first place. Having said that, it isn’t cheap, and for whatever reason, Urwerk has made the Urwerk UR-210S very exclusive as a limited edition of just 35 pieces. Price for the Urwerk UR-210S Full Metal Jacket watch is 145,000 Swiss Francs. urwerk.com 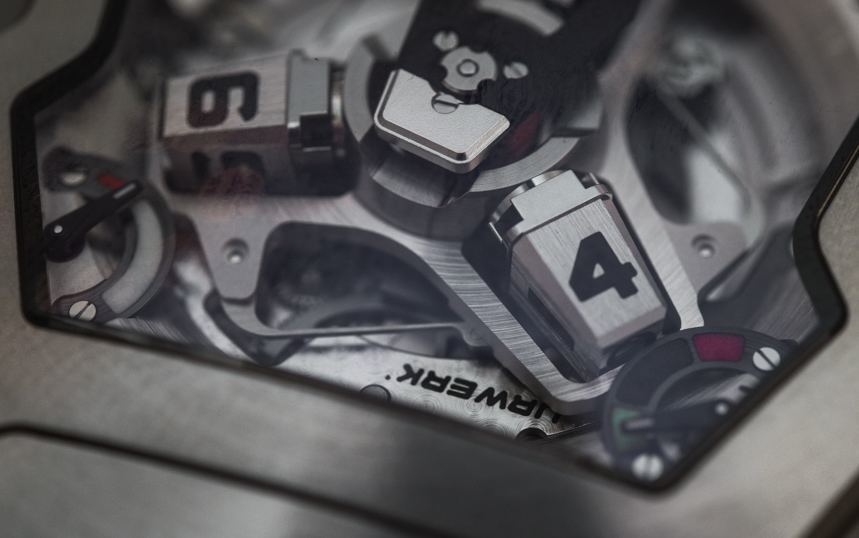 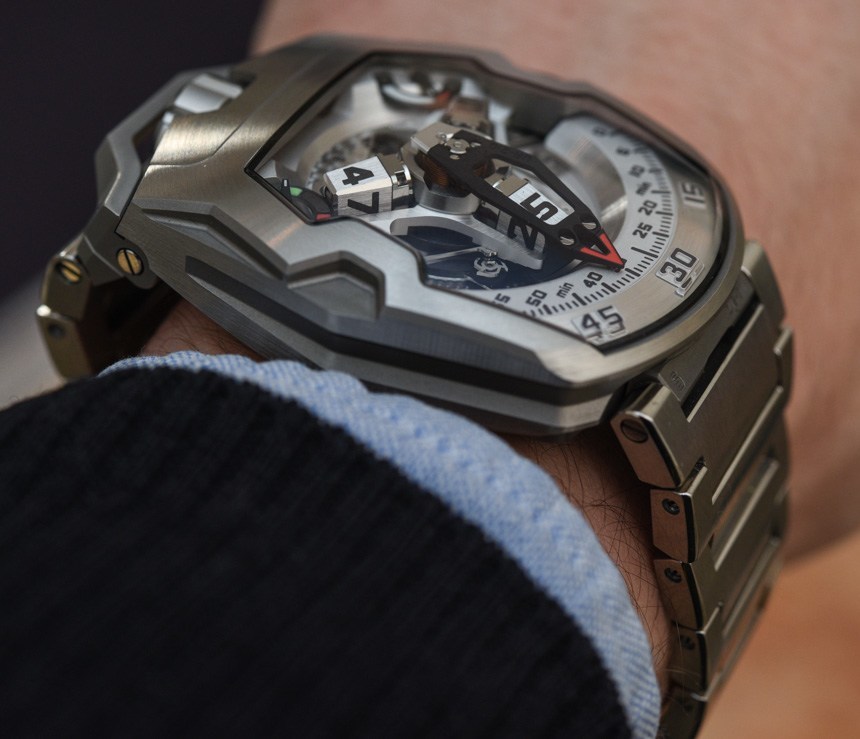 – Controls: Two-position winding crown with crown protector; On the back: winding efficiency selector