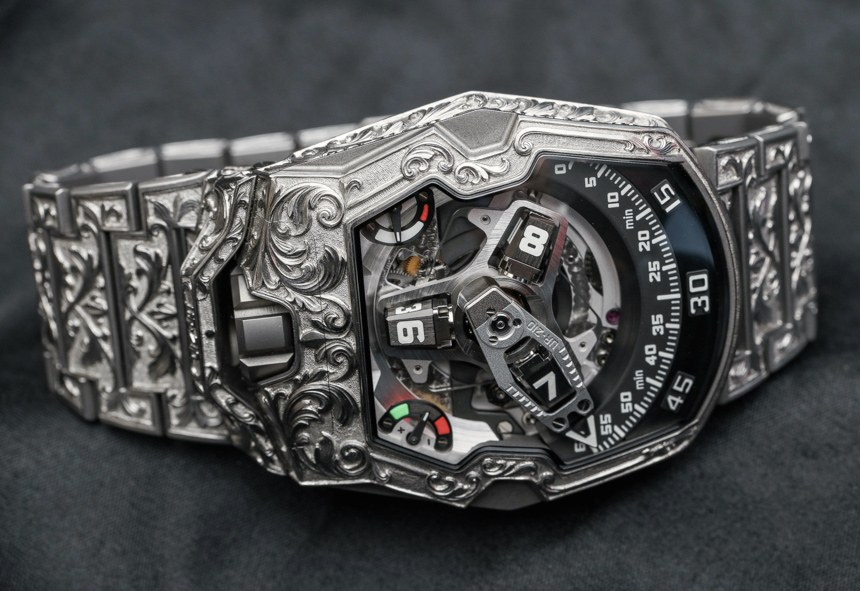 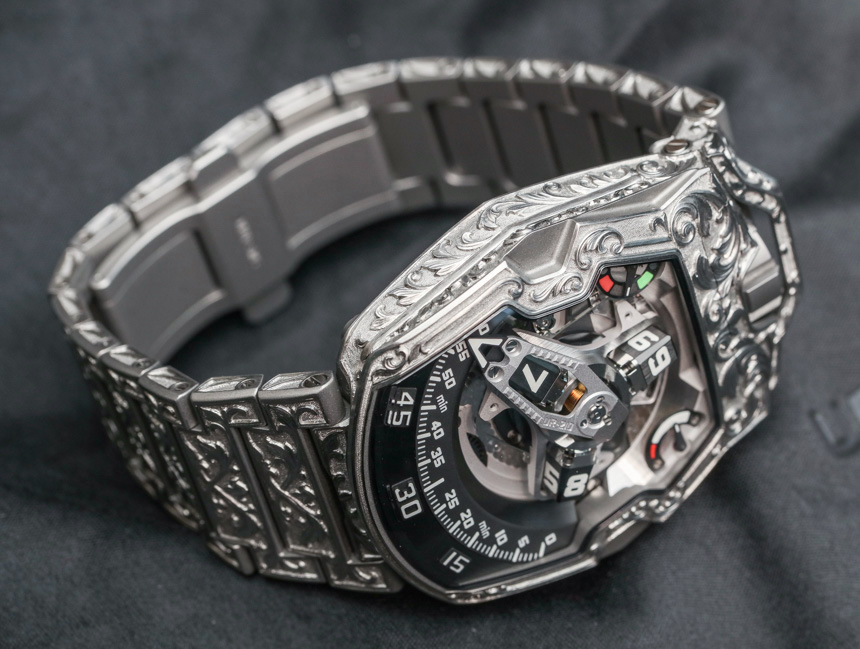 In the world of independent watchmaking, Urwerk is surely among the boldest and most creative. The brand is renown for its iconic satellite system for displaying the time, but they have, in the past couple of years at least, also been exploring new and interesting ways of dressing up their existing models. The brand’s UR-105 watch, for example, has served as a canvas for some of Urwerk’s most fascinating models, such as the recent UR-105 T-Rex. Another watch that has served as the foundations of some of Urwerk’s most interesting pieces is the UR-210, with models like the CP ‘Clou De Paris’ following. And right here, we have what is perhaps the most outrageous version of the UR-210 to date. Behold, the Urwerk Amadeus UR-210 watch. 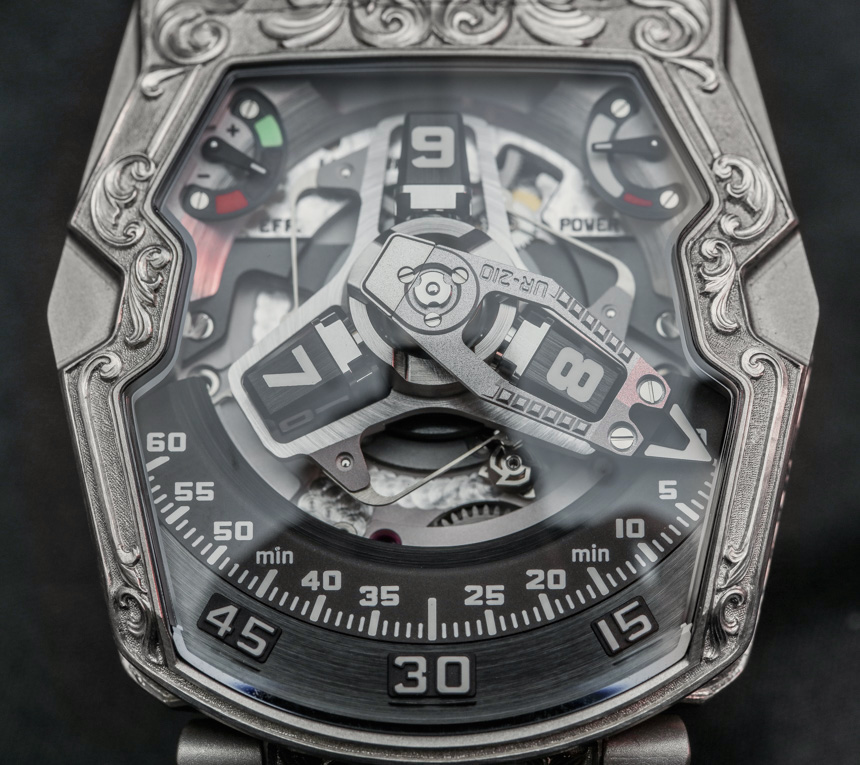 Hands-On with the URWERK Amadeus UR-210 is now live. The engravings alone took Florian Güllert over 260 hours to create. @urwerkgeneve ? ?Read about it on aBlogtoWatch.com #ablogtowatch

The Amadeus UR-210 is based on the Urwerk UR-210, which was first introduced in 2012. The Amadeus UR-210 is a unique piece and was created especially for Urwerk’s 20th anniversary. Like the UR-105 before it, it uses Urwerk’s signature system of satellites to display time. However, what made it really special was its efficiency indicator. What the efficiency indicator does is that it displays the difference between energy consumed and energy generated by the mainspring for the past two hours. Essentially, it tells you if you have been moving your wrist enough to generate enough power in the mainspring to drive the watch. 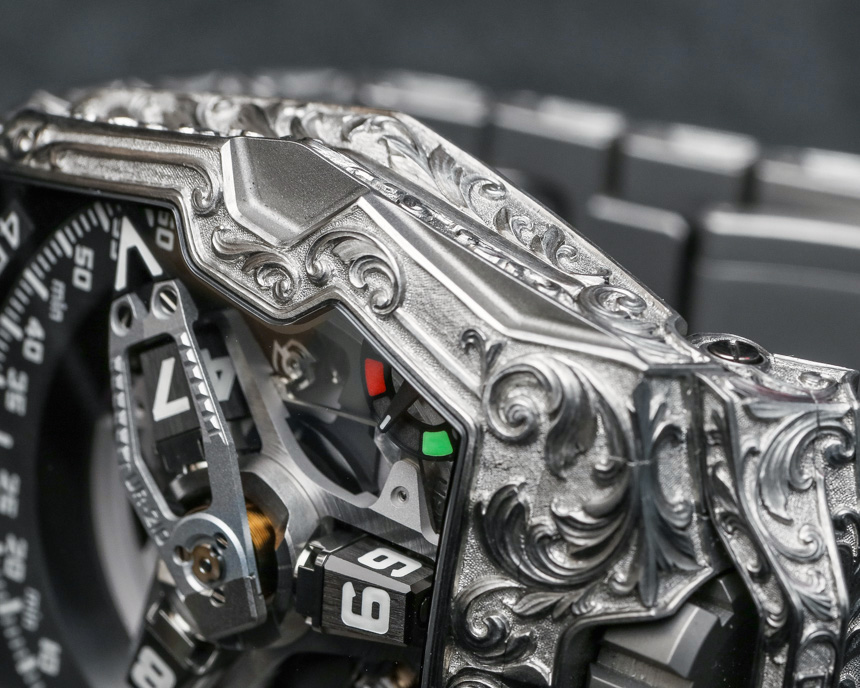 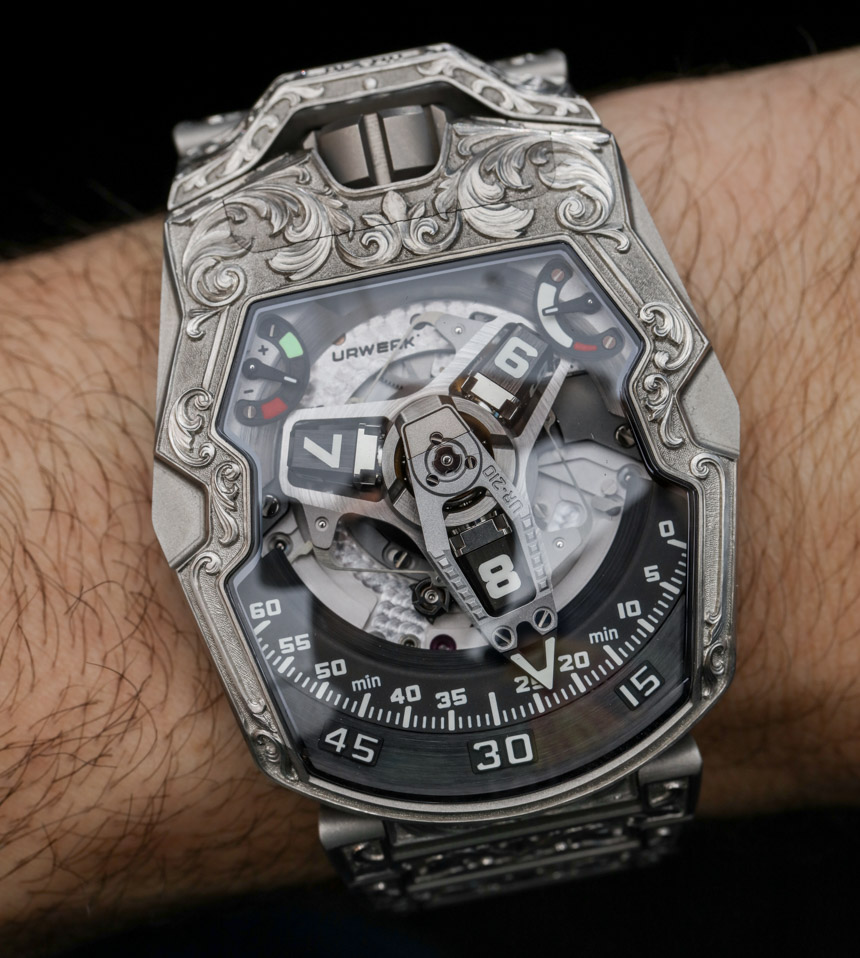 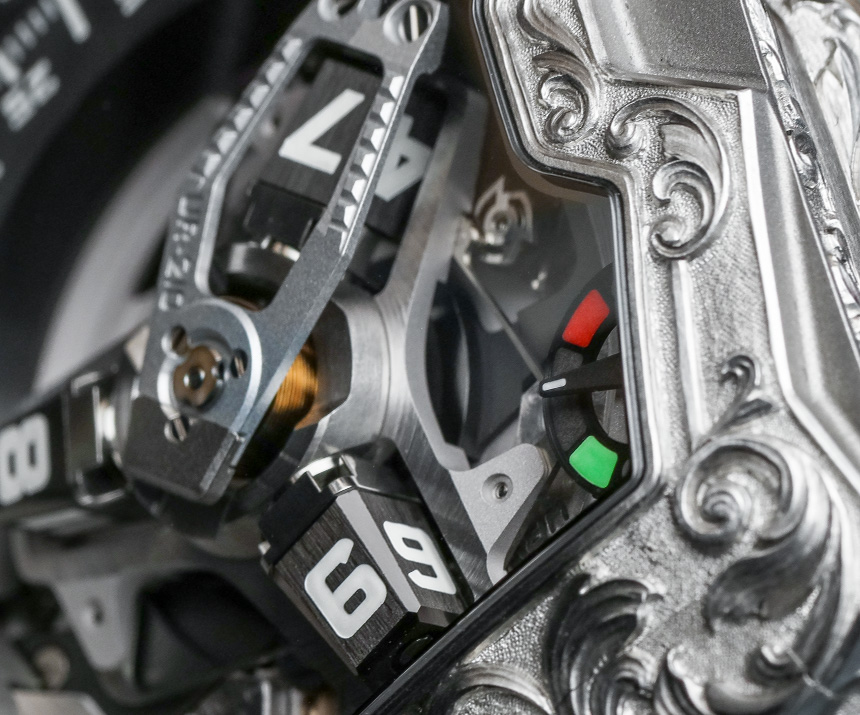 That’s not all though, the UR-210 also includes an adjusting mechanism on the case back of the watch that lets you alter the efficiency of the rotor. There are three modes: Full, Reduced, and Stop. Full translates even the smallest movements into winding the mainspring. In Reduced mode, an air turbine compressor slows down the rotor’s movement so that the mainspring is wound slower. In Stop mode, the rotor is completely disengaged and doesn’t wind the mainspring at all. 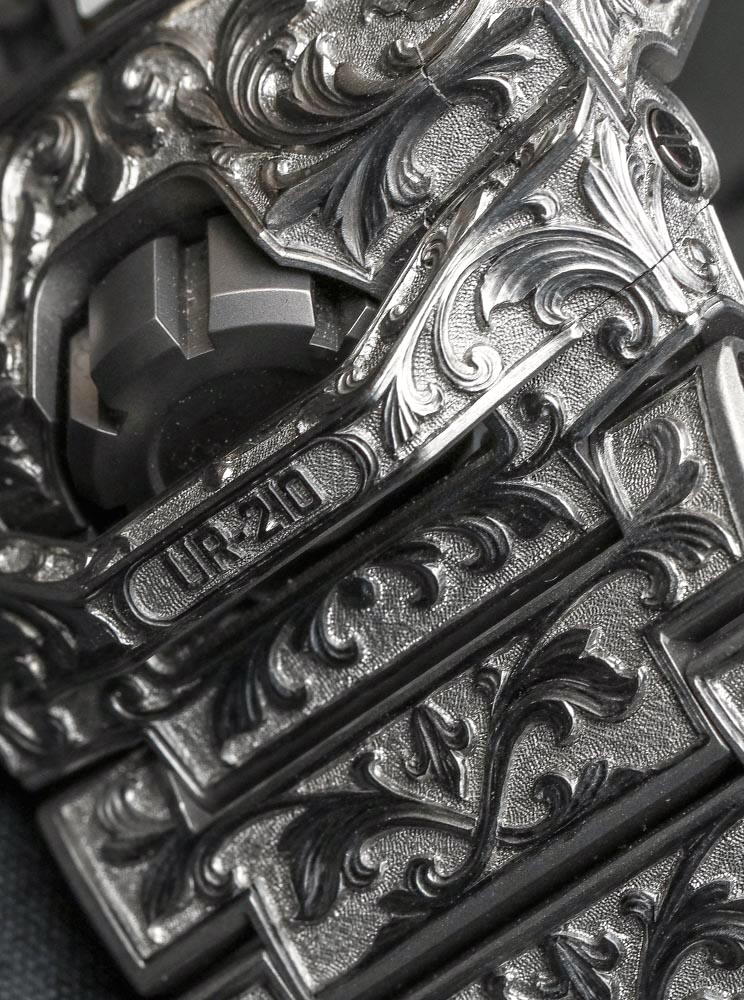 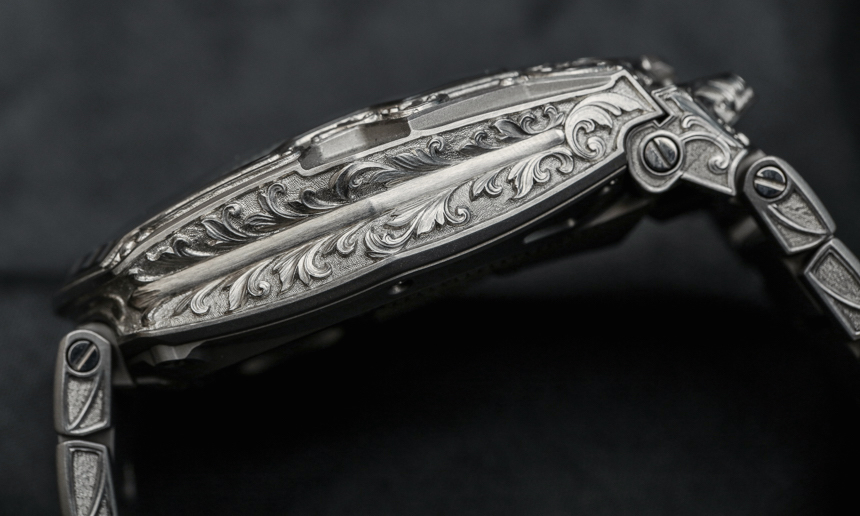 The new Amadeus UR-210 has all of these functions, but the standout feature of the watch is its intricately engraved case. The case is made out of a combination of steel and titanium and overall dimensions remain the same at 43.8mm in diameter and 17.8mm in height. Water resistance remains the same at 30m too. More crucially, it is a big watch and commands serious wrist presence. 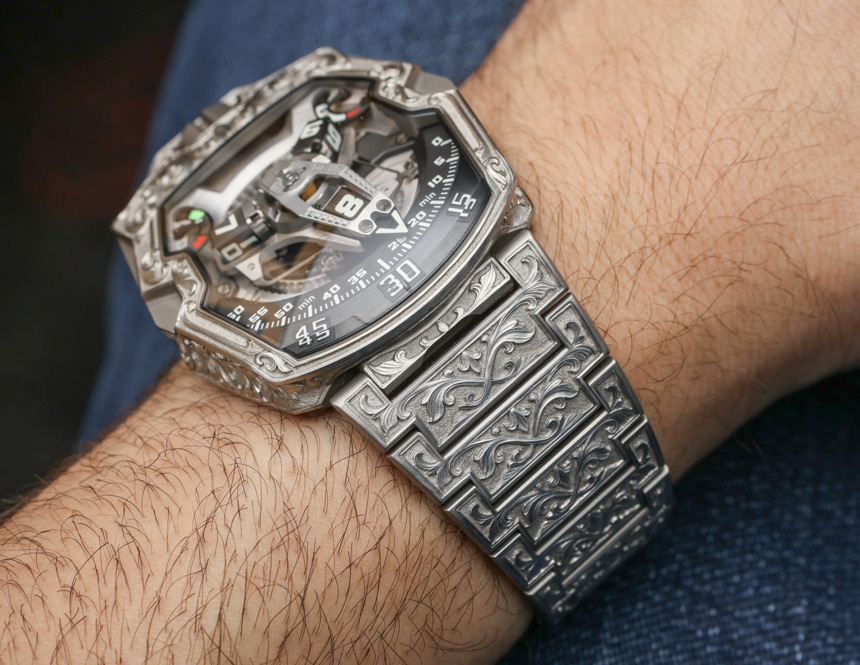 The engravings on the Amadeus UR-210 were inspired by an ancient 18th-century clock that was gifted to Urwerk co-founder Felix Baumgartner. It was one of the first collector’s pieces that Baumgartner’s father gave to him, and so it has a special place in his heart. The clock is a centerpiece in Urwerk’s workshop and stands out for its elaborate gilding that was done in the purest of Baroque style. 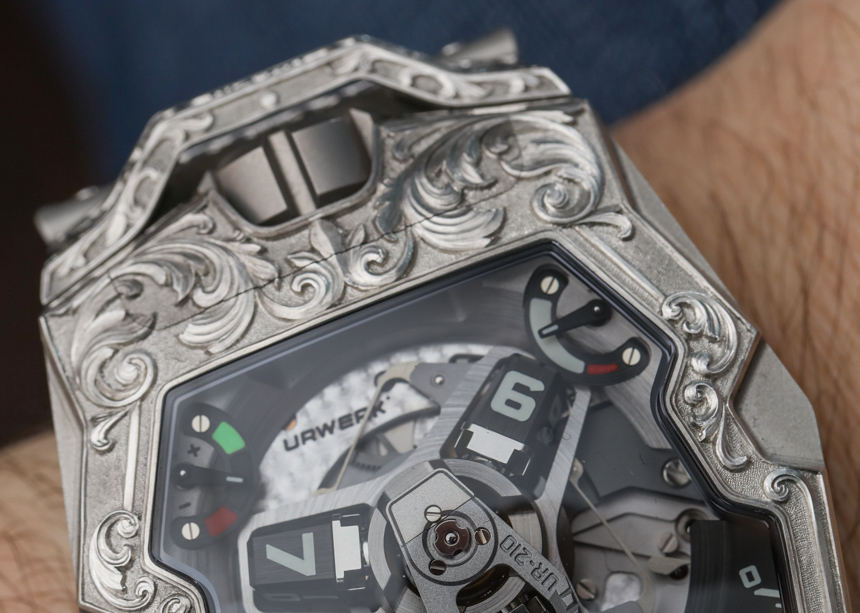 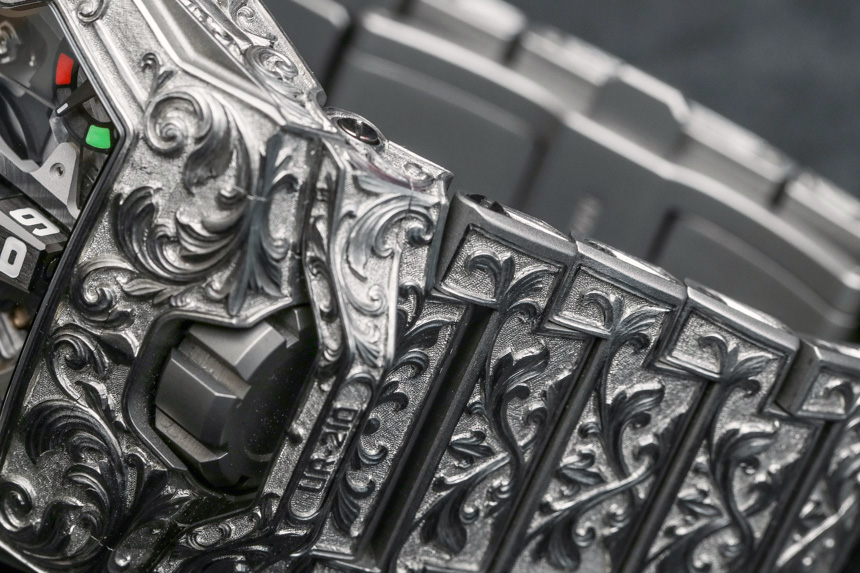 The name Amadeus, according to Urwerk, comes from the legendary composer, Wolfgang Amadeus Mozart. Mozart was a prominent composer of the 18th century and Baumgartner, who has read Mozart’s biography, calls him a pioneer of the punk sub-culture and was a rebel in his time. Urwerk, Baumgartner said, shares the same spirit as Mozart, hence the name Amadeus. This sounds a little tenuous, but hey, Amadeus does make for a pretty nice sounding name for a watch. 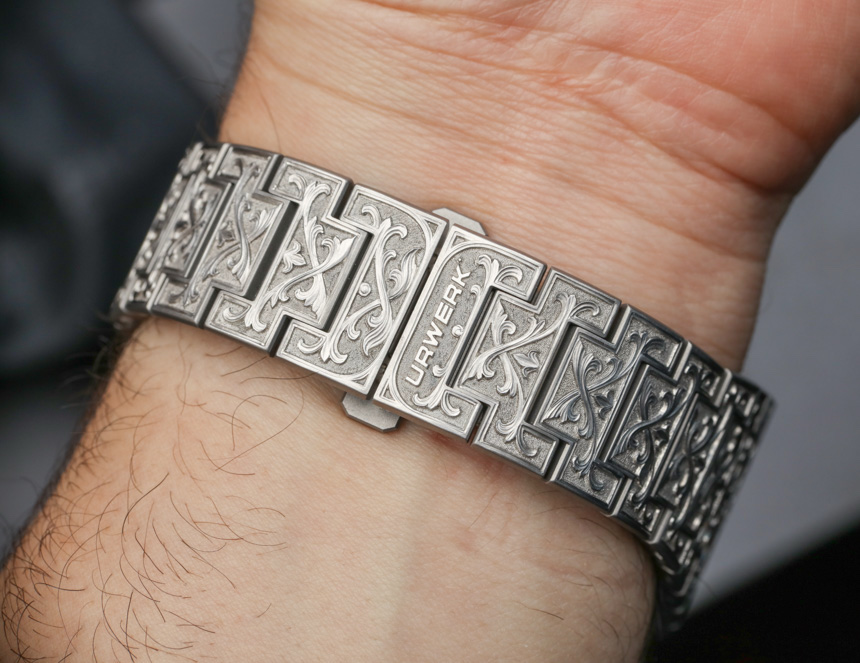 To recreate the look and feel of this ancient clock in a UR-210 watch, Urwerk turned to noted craftsman Florian Güllert, who engraved the patterns on the Amadeus UR-210 by hand. Güllert decided that the flowing patterns of acanthus leaves would suit the angular case of the UR-210 most and he has painstakingly designed the entire pattern so that the engravings would flow seamlessly from the case to the bracelet. The entire engraving process took Güllert over 260 hours to complete. Unsurprisingly, Güllert says this is one of his creations that he is most proud of. 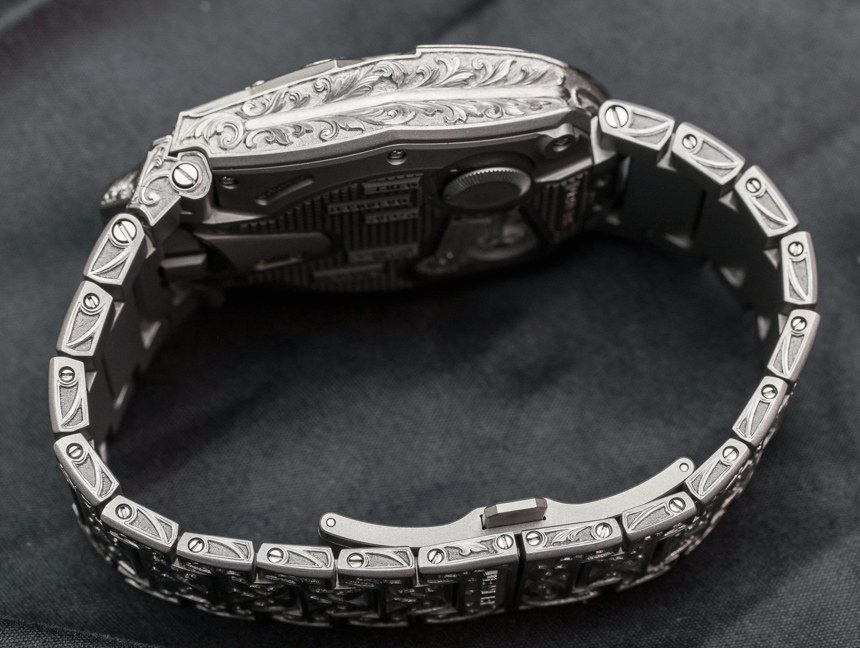 In the flesh, the watch looks fantastic. It is almost as if you are holding a small piece of art from the 18th century in your hand. The engraving is as intricate as it is detailed, and it is even more incredible when you remember that most of the engraving is actually done in steel, which is a relatively hard metal to work with – steel is a considerably harder material than gold. 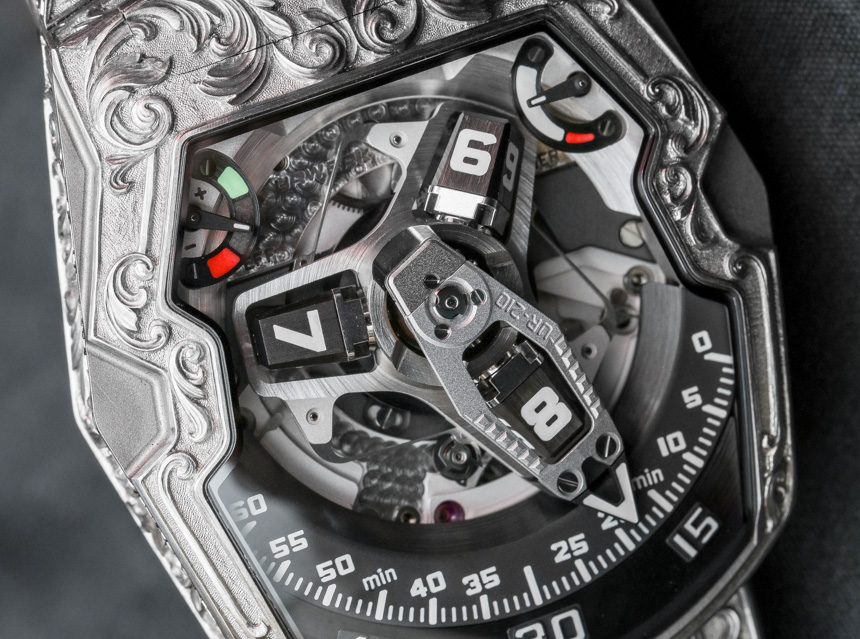 However, the case is just one part of the story. The case is undeniably ornate – it almost looks as if it has been dug out or found in an archaeological site – and then you look at the dial and what you see is a very modern and technically complex system of satellites and gears. It looks nothing like an ordinary watch and to me, this dichotomy makes the Urwerk Amadeus UR-210 very appealing. 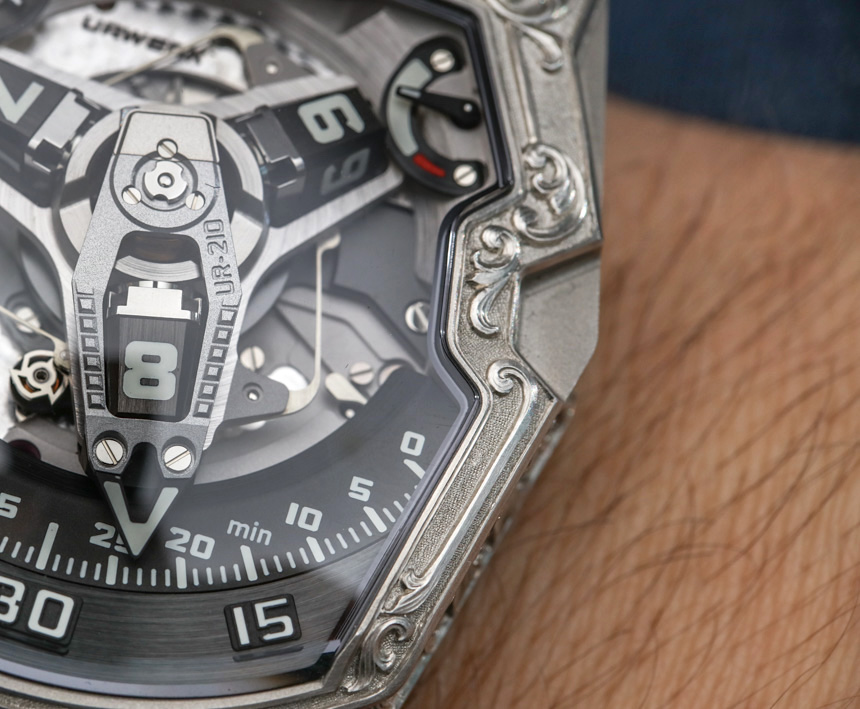 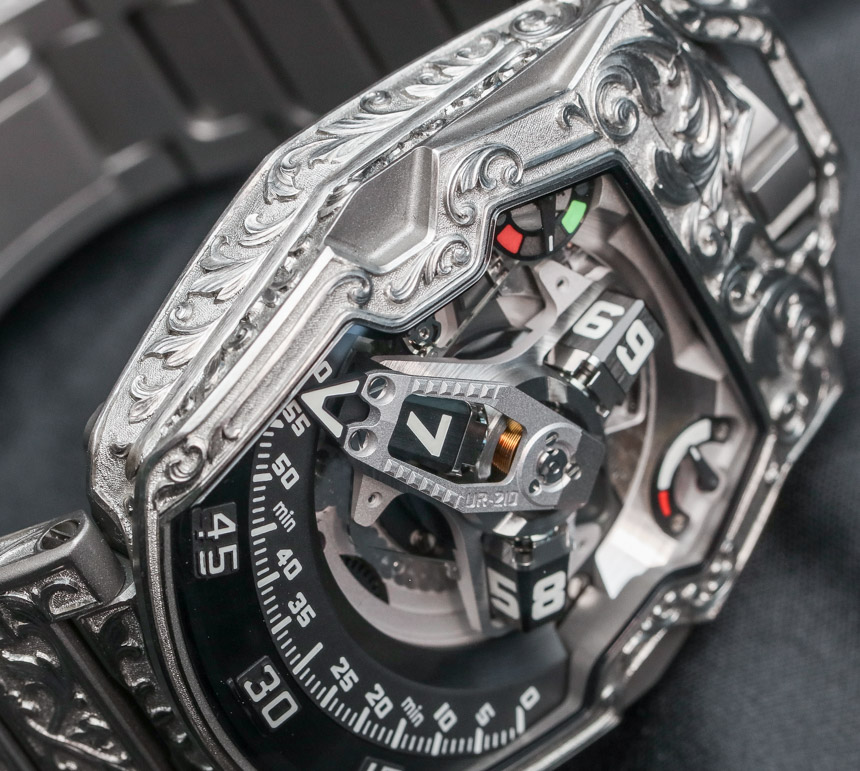 The dial is classic Urwerk, with the hours displayed using a series of revolving satellites, and the minutes using a retrograde scale. It might be complicated, but it is actually quite simple to read. In the photo above, for example, the time is 8:18. In the top left and right corners of the dial are the winding efficiency indicator and power reserve indicator respectively. 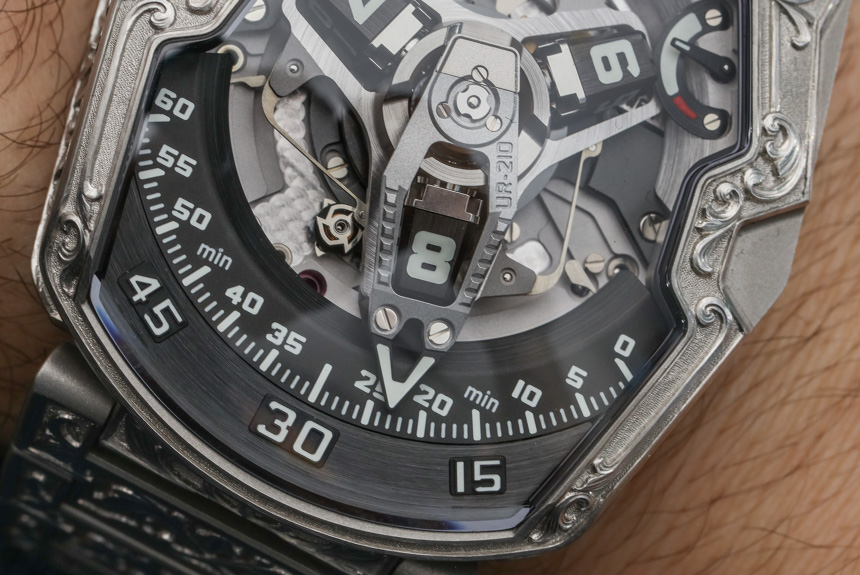 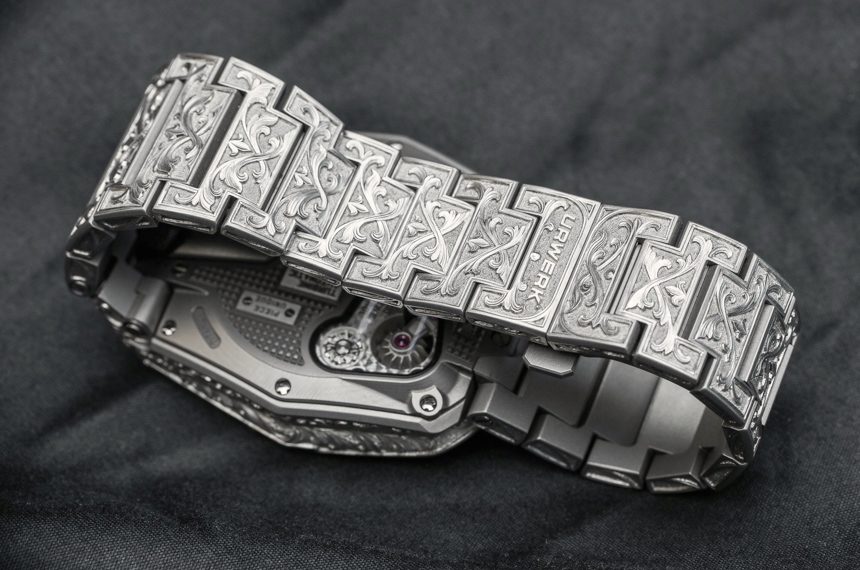 The movement within is the Urwerk Caliber UR-7.10. This is the same movement that powers other variants of the UR-210 watch. It beats at 4Hz and has a power reserve of about 39 hours. You can’t exactly see a lot of the movement since there’s no sapphire case back, but you can see a lot of the satellite system from the dial side. The movement is finished excellently with a mix of circular and straight satin-finishing, sand-blasting, perlage, and circular graining. The overall look and feel of the movement is best described as technical, which fits the spirit of the movement itself, but is very at odds with the elaborate engraving on the case. 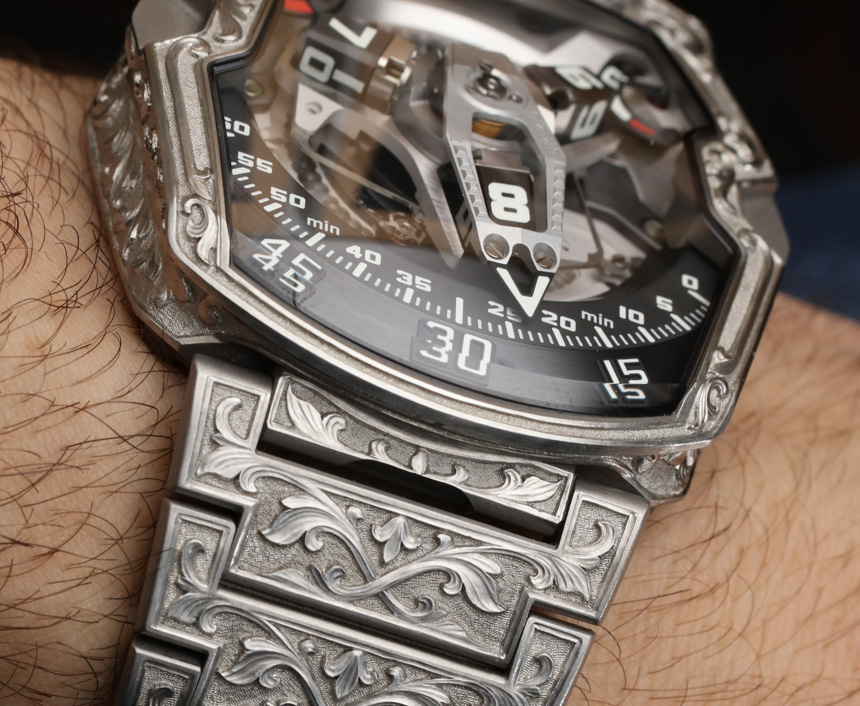 And that I guess is the appeal of this watch. It’s a mishmash of two very different styles from two very different times. Despite this contrast of styles, the end effect, to me at least, is quite attractive and compelling. It is certainly bold, different, and out there, and like so many other things in life that are bold and different, not everyone is going to appreciate it. I can definitely see some people criticizing it, saying that the mix of styles is incongruent and incompatible, and they have a point. But, as frequent readers of this blog may know, I’m always up for watches that are bold and different, and the Amadeus UR-210 is about as bold as they come. The Urwerk Amadeus UR-210 is a unique piece and was reportedly sold to a lucky collector for about $280,000. urwerk.com