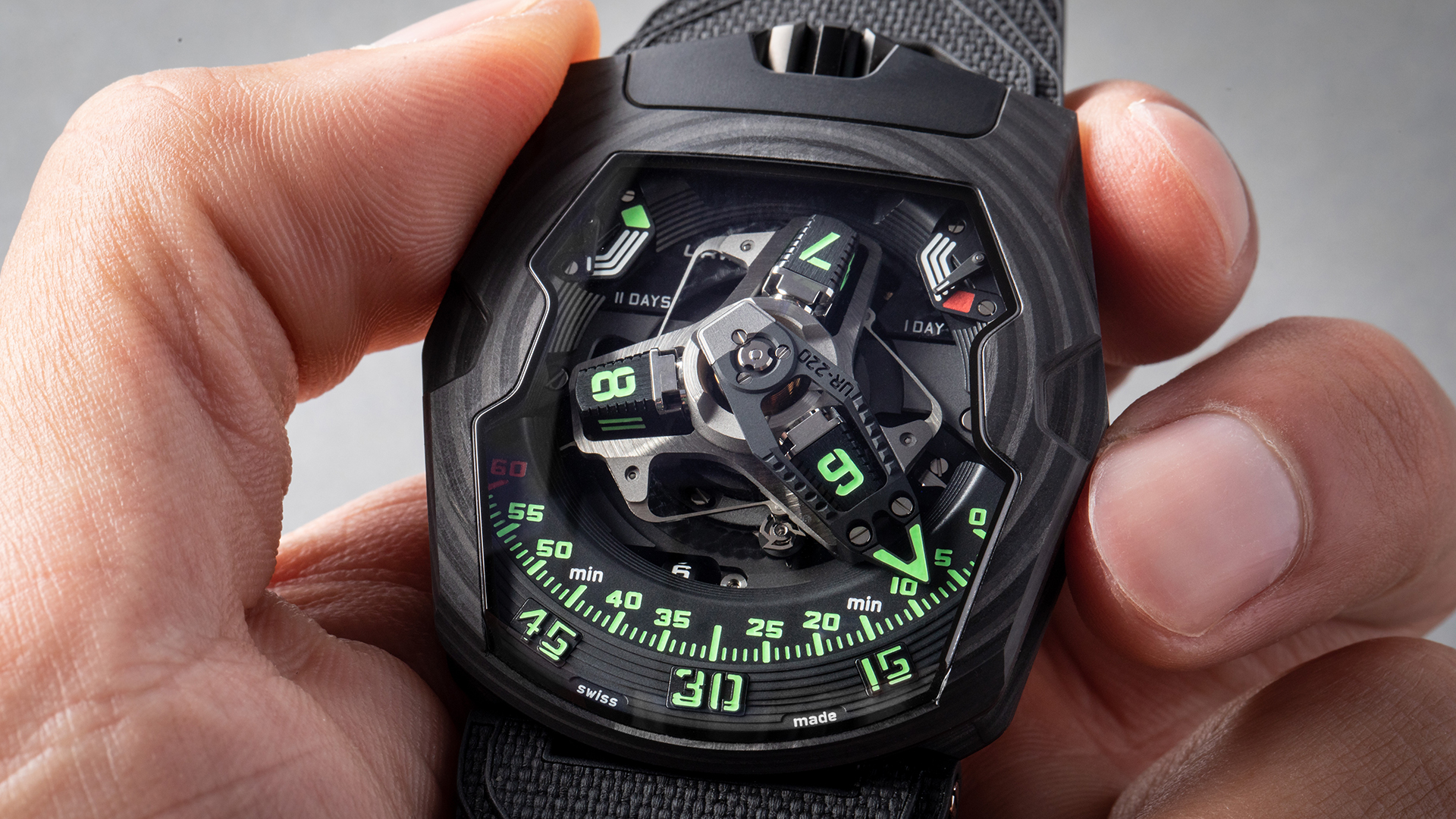 Few luxury watch brands capture the look and feel of science fiction as well as Urwerk. Even among the rarified and fantastical ranks of haute horlogerie, Urwerk has built a product line over the last several years that would feel more at home on the bridge of a Romulan Warbird than it would with anything else coming out of Switzerland. When the brand announced earlier this year that it would be discontinuing its signature wandering hours UR-210 collection, it left a gap in the lineup that enthusiasts were eager to see filled. Now, after several months of uncertainty, Urwerk has returned to the wandering hours concept with the revamped UR-220, known internally during development as the “Falcon Project.” While outwardly similar to the previous UR-210, nearly every element of the watch has been redesigned, from a slimmer, more ergonomic case to a movement reworked from the ground up. As a result, the Urwerk UR-220 “Falcon Project” continues one of the brand’s signature looks, while reinventing the design for a new decade.

For its first iteration, the Urwerk UR-220 is housed in a 43.8mm by 53.6mm lugless oblong case made of carbon thin ply composite. This multilayered material (in total, the case features 81 layers of ultra-thin carbon material) leads to a dark, striated look reminiscent of Damascus steel, with an even circular striping pattern. While the distinctive multi-sided shape of the bezel and sapphire crystal, as well as the 12 o’clock crown, is carried over from the UR-210, the UR-220 looks from initial images to have a slimmer and more rounded profile than its predecessor. While this is still a relatively thick watch at 14.8mm, this is still a full 3mm thinner than the UR-210. One of the UR-220’s party pieces is located on the caseback, where a small sapphire display window highlights the “oil change” counter. This is a rotary display tracking the number of months since the last service and a reminder of the recommended 39-month service interval. It’s an interesting way to remind owners of the importance of servicing and will likely make for a good conversation piece. What might become a less desirable conversation piece is the UR-220’s water resistance, as this complex case is only rated to 30 meters. 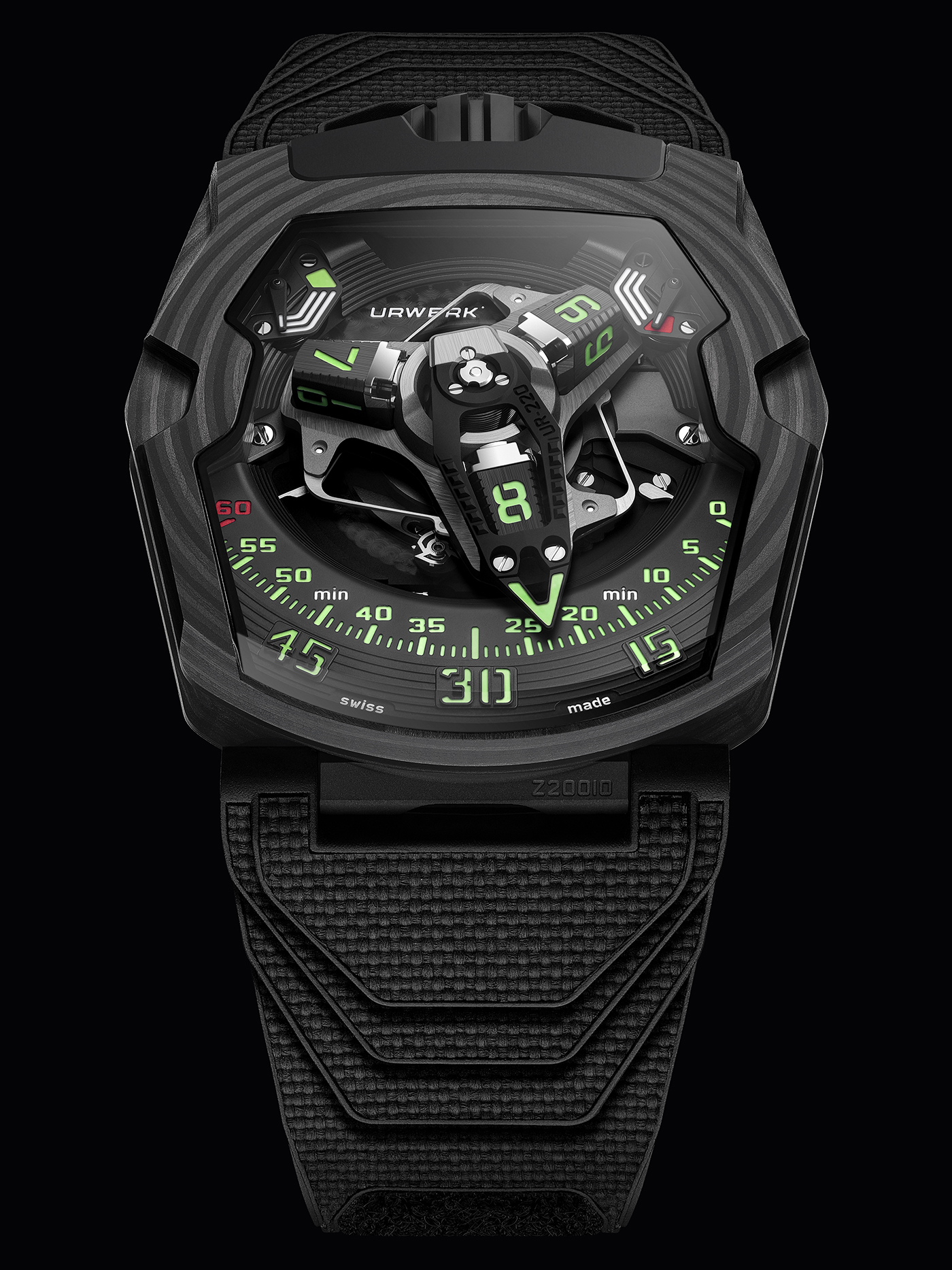 Like its predecessor, the real centerpiece of the Urwerk UR-220 is the skeletonized dial with its instantly recognizable “satellite” wandering hours display. While the general layout is carried over from the UR-210, initial images show the execution for the new line is narrower, more angular, and visually meaner, with each of the rotating hours markers along with the retrograde minutes hand dominated by new serrated edges. The typefaces used for numerals and dial text have also been substantially changed, with the UR-220 opting for a militaristic, angular stenciled look. Other than the typeface change, however, the retrograde minutes scale along the bottom third of the dial also receives a touch of ribbed surfacing detail. While this scale can be confusing at first glance, the combination of the large central pointer hand framing the current hour marker and indicating the current minute becomes intuitive quickly. At 10 o’clock and 2 o’clock, the UR-220 also features twin power reserve indicators, with the 10 o’clock model covering the entire 48-hour reserve capacity of the movement and the 2 o’clock indicator focusing on the final 24 hours of reserve. 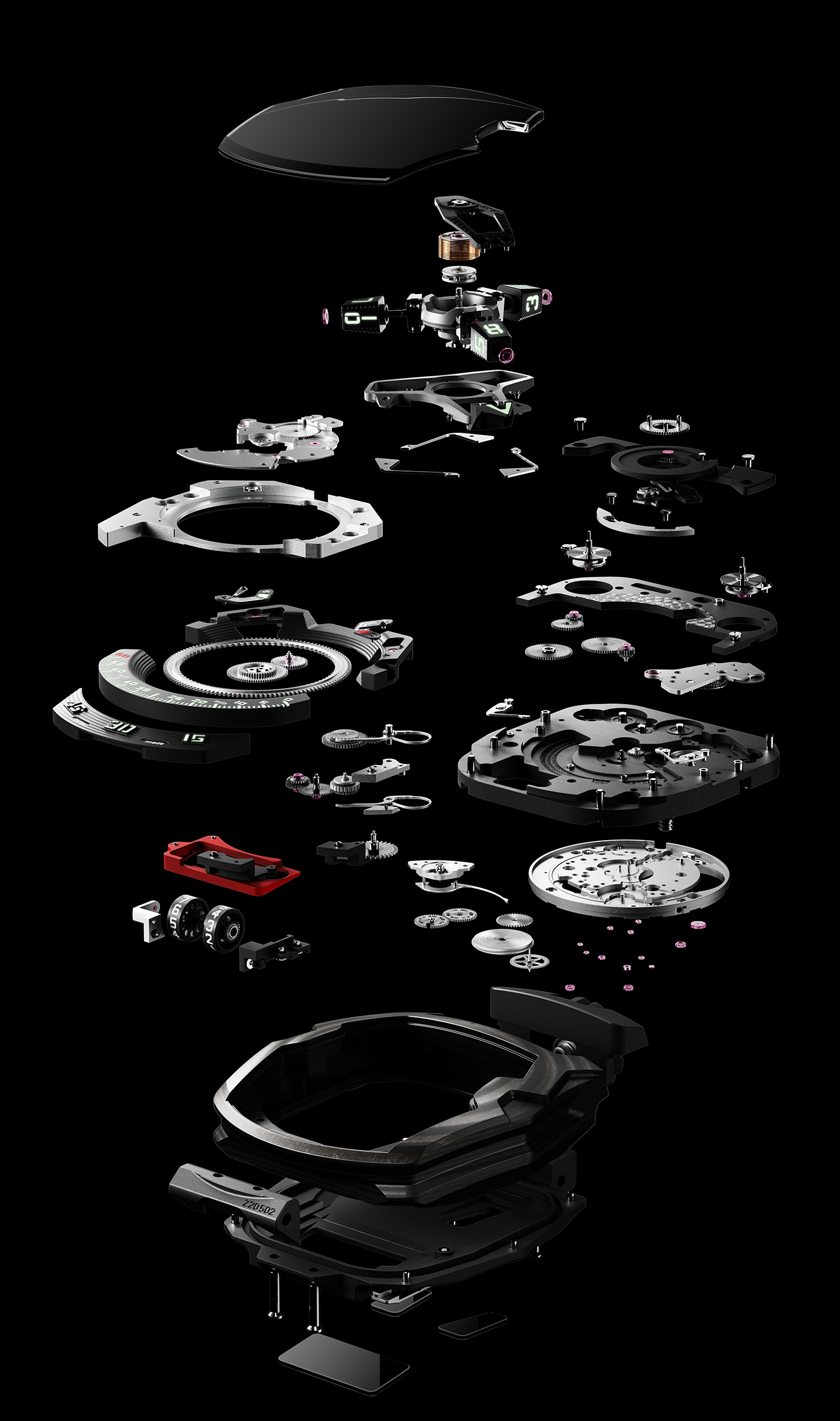 Despite more than a passing visual similarity to the UR-210’s movement, the in-house UR-7.20 hand-wound movement inside the UR-220 has been substantially changed from its predecessor. Beyond removing the automatic winding system found in the UR-210, the UR-7.20 also beefs up the power reserve capacity to 48 hours while maintaining a single mainspring barrel. Power reserve has traditionally been an Achilles heel for Urwerk due to the sheer mass of the wandering hours and retrograde minutes hands requiring extra torque to move, and while 48 hours at a 28,800 bph beat rate is not groundbreaking by any means this is a major step forward. 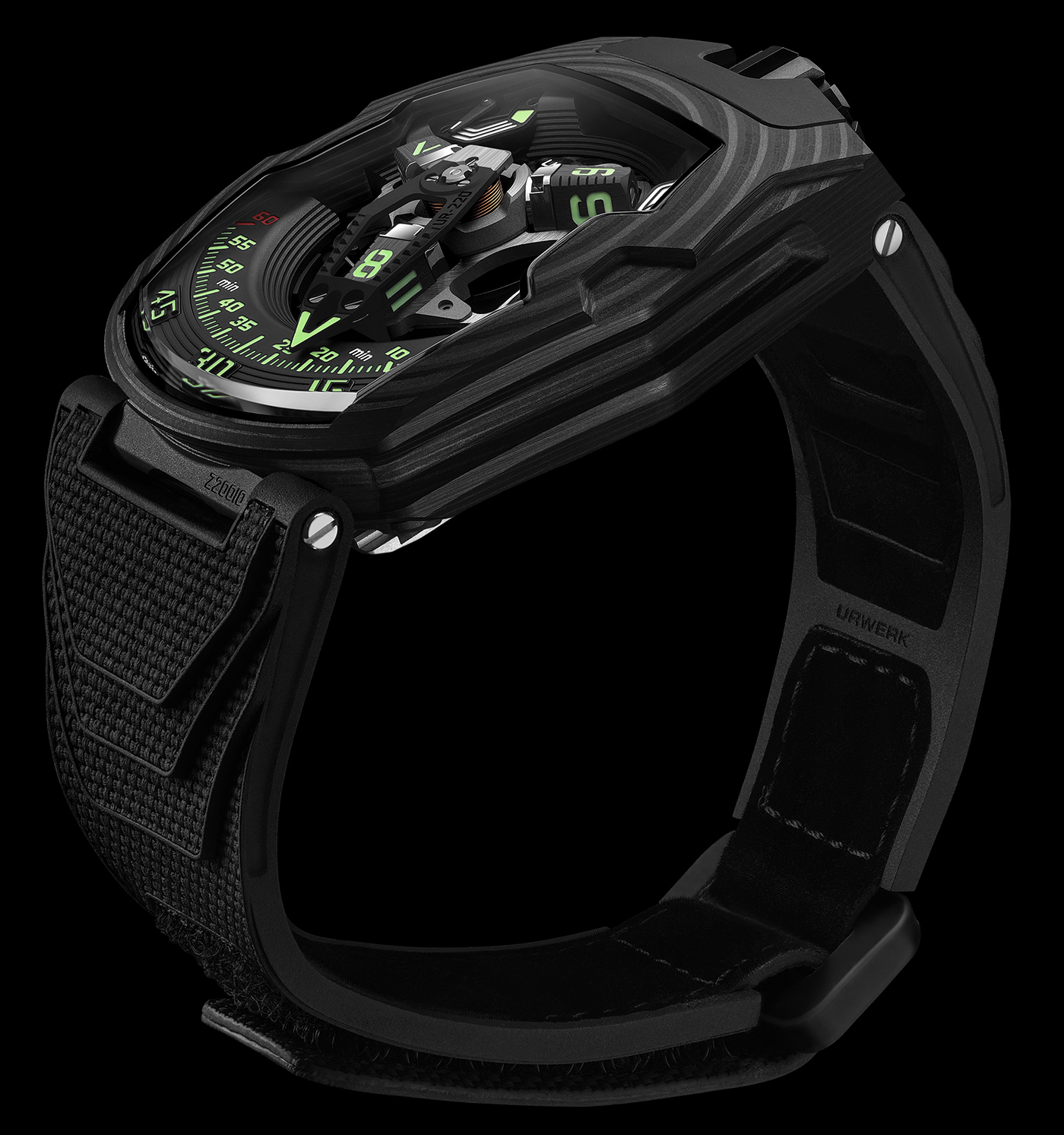 In keeping with the slimmer, more detailed, and more aggressive aesthetic of the UR-220 lineup, Urwerk pairs this new model with its first-ever rubber strap. There’s a wealth of visual detail here, from the angular scaled layers flowing into the integrated case to the woven sailcloth pattern of the main surface. Urwerk claims this strap has been treated with a Vulcarboné curing process for softness, and the strap features Velcro fastening for fast securing and removal. 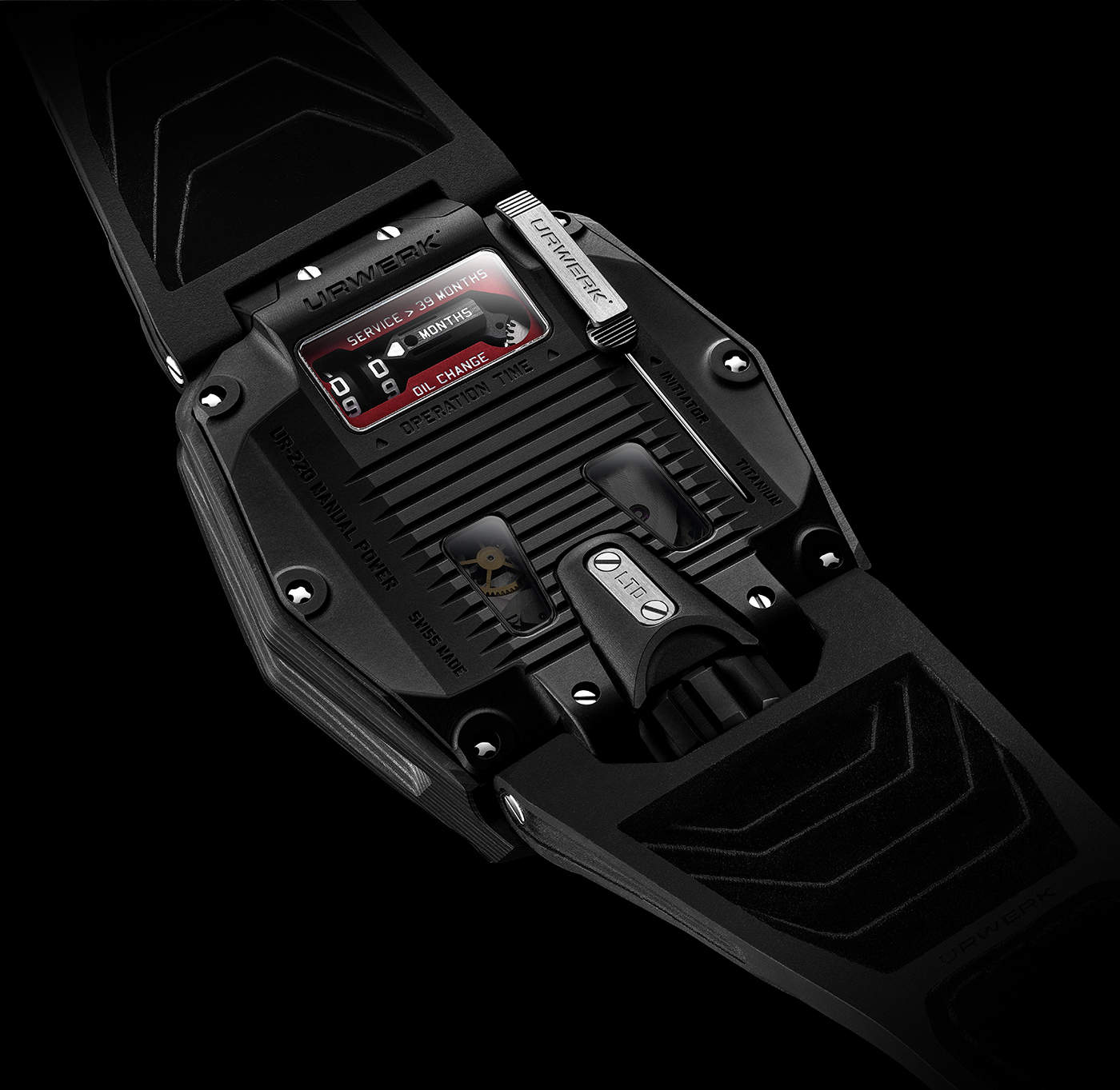 With the UR-220 “Falcon Project,” Urwerk has brought a robust set of refreshments to one of its signature lines, without compromising the technical sci-fi spirit of the series. The Urwerk UR-220 “Falcon Project” is available now through authorized dealers, with an MSRP of 145,000 CHF. For more information, please visit the brand’s website.