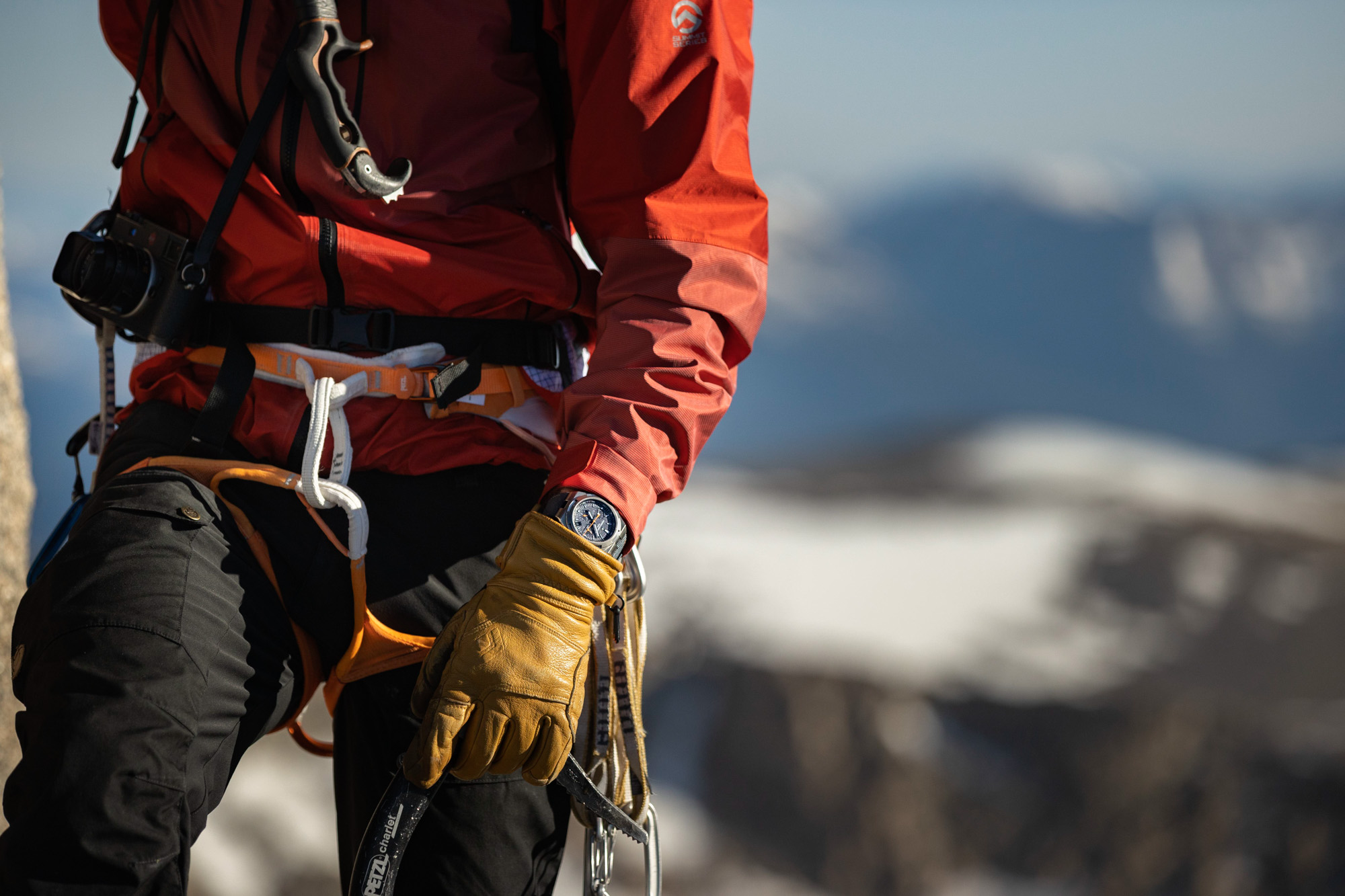 Well they did it. They finally did it. After nearly two full years of shrugging off questions and exhausting “will-they-or-won’t-they” speculation, Vacheron Constantin has made good on the titanium Overseas prototype worn by filmmaker and National Geographic photographer Cory Richards during the alpinist’s Mount Everest summit bid back in 2019. Granted, it’s not entirely the same watch – Richards’ prototype was full titanium and was fitted with tantalum reinforcements on the crowns and bezel, which were seated neatly between newly sculpted crown guards integrated in the 9 o’clock side of the case. This time around, these two new references are built using the same rugged titanium footprint but with a contrasting titanium Maltese Cross bezel instead of the harder tantalum — hearkening not the Richards prototype but rather the gray-dialed second generation Overseas “Deepstream” references from the early aughts, which were built around the same principle of mixing alloys to create a more capable, toolish aesthetic. So whatever you call it — a sequel, a sibling, or just a straight-up remix — these muscular new “Everest” references are every bit as sporty and stirring as the first time we laid eyes on the prototype. 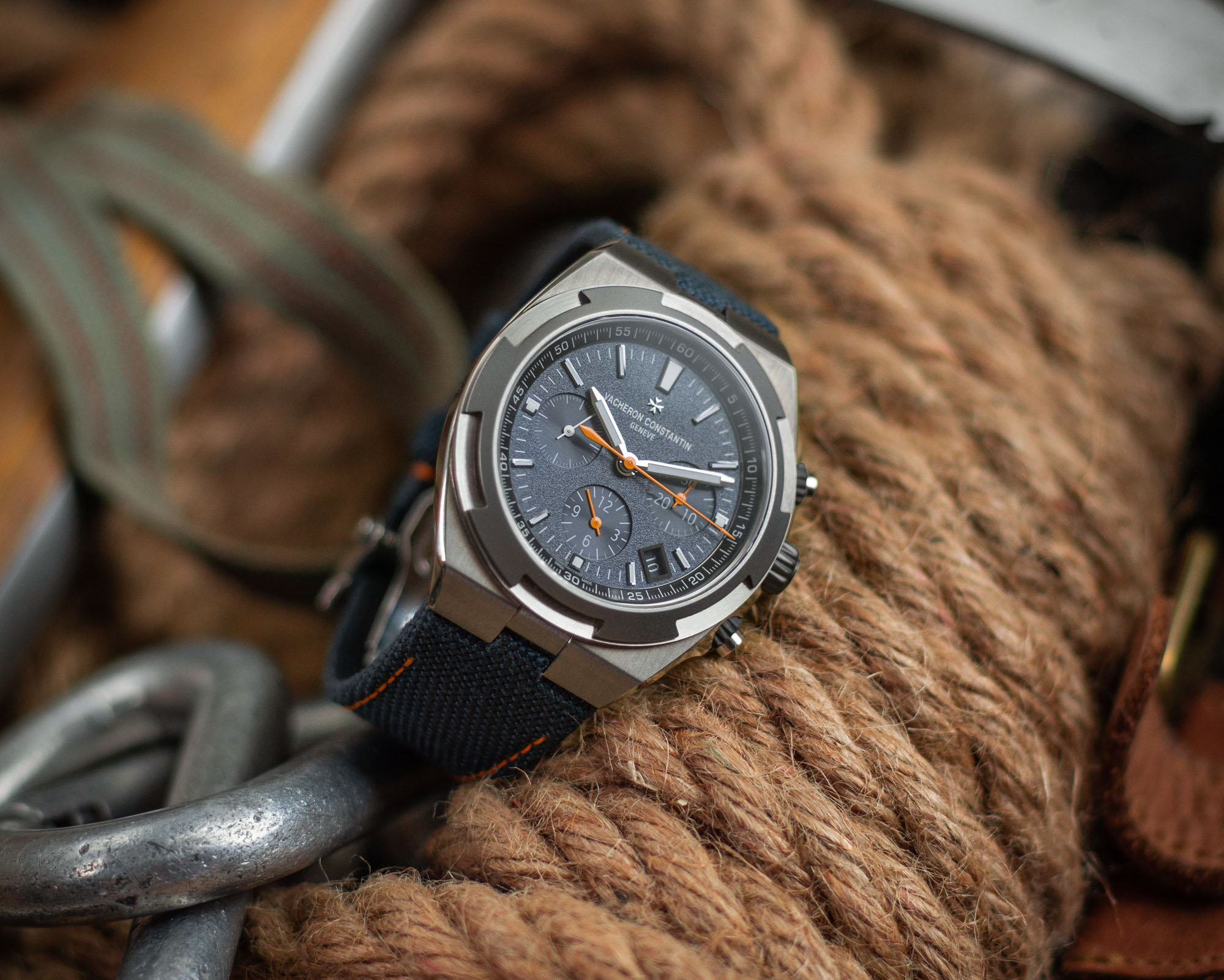 Subtle differences in case makeup aside, Vacheron was wise to maintain several of the other key elements that made the Richards prototype so fetching: namely the fully matte gray titanium bezel and crown elements, which effectively de-bling the entire frontal profile of the watch, granting it much more of an incognito-lux presence on the wrist. Furthering this effect is the deeply stamped dial, which uses a heavy textured graining to minimize reflections and keep the whole thing flying comfortably under the radar. But what was a darker gray and black dial on the prototype is now a lighter gray-blue, contrasting the dark 18k gold markers, the bright orange counters, strap stitching, and GMT & power reserve hands — tones that all nicely complement the earthier hues one might find around dusk way up in the high alpine. 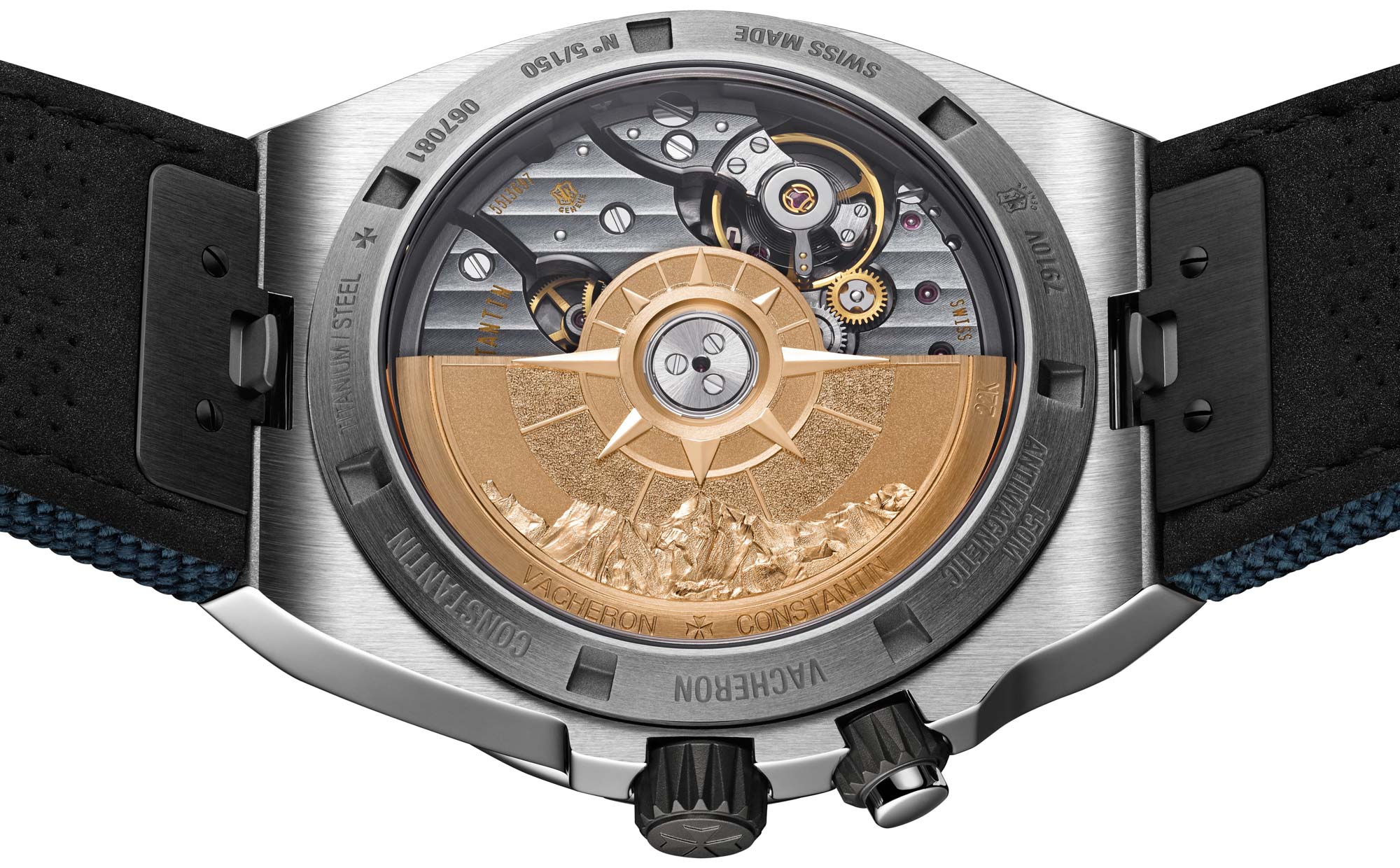 The flip side of both watches remains pretty consistent with the original prototype, with a solid 22k gold rotor bearing a view of Mount Everest, as photographed by Richards in one of his earlier expeditions. Also quite cool is how the movement plates and bridges have been treated with a special NAC coating, leaving them with a stealthy dark gray finish that neatly contrasts the bright gold of the rotor and other elements of the gear train. Both watches are powered by Vacheron Constantin’s own existing Geneva-sealed calibres — the cal. 5200/2 column wheel chronograph, and the cal. 5110 DT/2 dual time, with its independently adjustable hour hand and quickset date indicator at 6 o’clock, set by the pusher at 4 o’clock. It’s also a little easier here to see just how deeply seated the crown and pushers are into the case band, thanks to the new profile — it’s mostly from this view that you can see that this is an entirely new case, and not just the straight-sided case maintained on all three generations of existing Overseas watches. 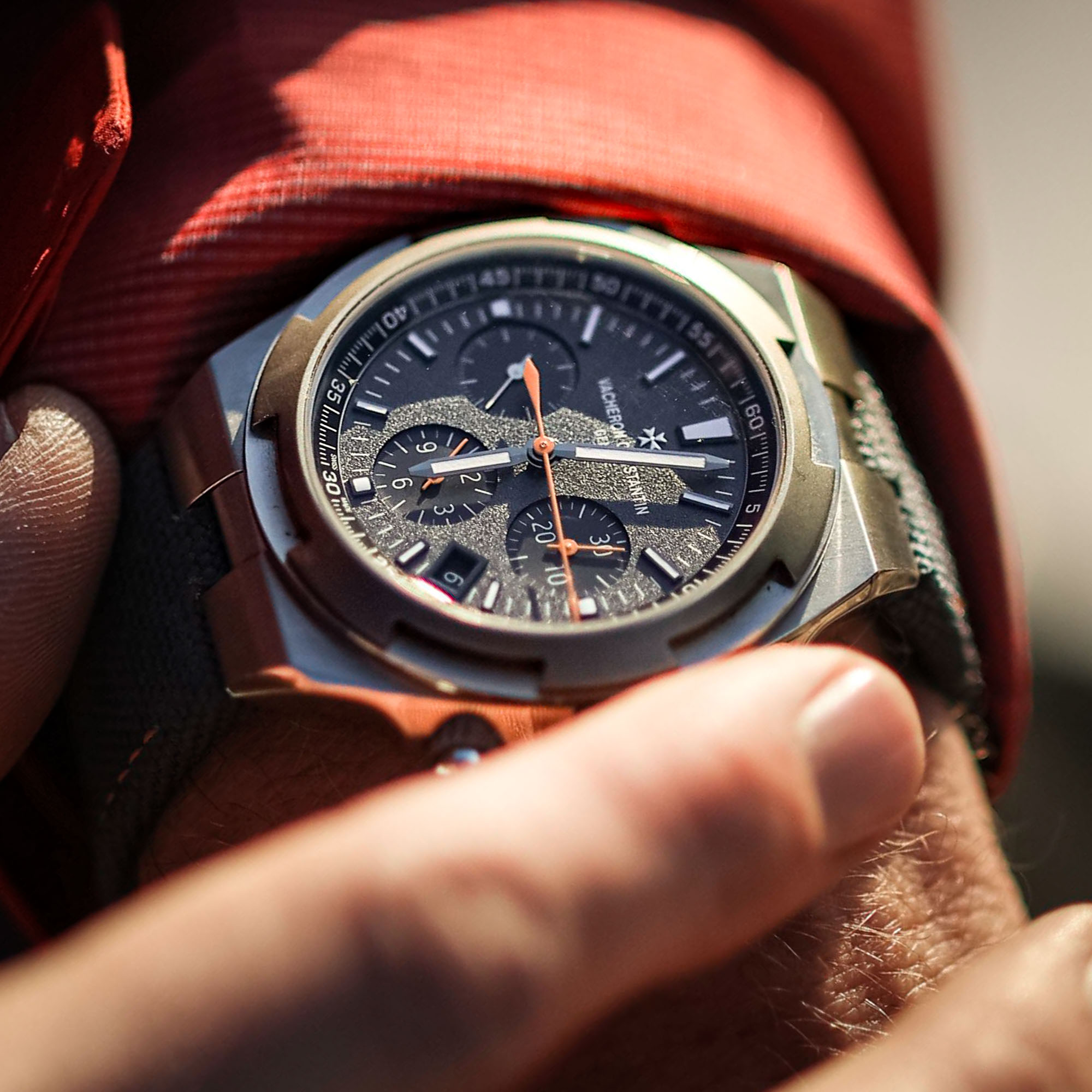 Now, here’s the difficult part. Both watches are quite limited, quite expensive, and reserved exclusively for Vacheron Constantin boutiques. The Everest Dual Time is the more approachable reference, with a price of $31,300 — which is a little over a 10% premium above the standard stainless steel variant, and that’s without the bracelet. No official word from Vacheron Constantin at this time as to whether or not a titanium bracelet will also be made available for this reference (as there was one floating around when the original prototype made the rounds), but one can probably safely surmise that given titanium’s complexity to machine and finish, and given the bracelet’s overall exceptional degree of finishing, as an add-on it would not come cheap. By the same token, the Everest Chronograph will set the collector back $37,000, which is approximately the same premium over the standard stainless steel column wheel-equipped Overseas chronograph. Either options are quite a lot of money for what’s ostensibly a very dressed-down traditional luxury sports watch, but with well-appointed crossover watches from old-world luxury brands still all the rage, at least consider it’s still a fraction of the price of the original one-of-one Richards prototype which hammered for a little over $100,000 when it was auctioned for charity by Philips at the end of 2019. For more information, you can take a deep dive on the Overseas collection at vacheron-constantin.com.