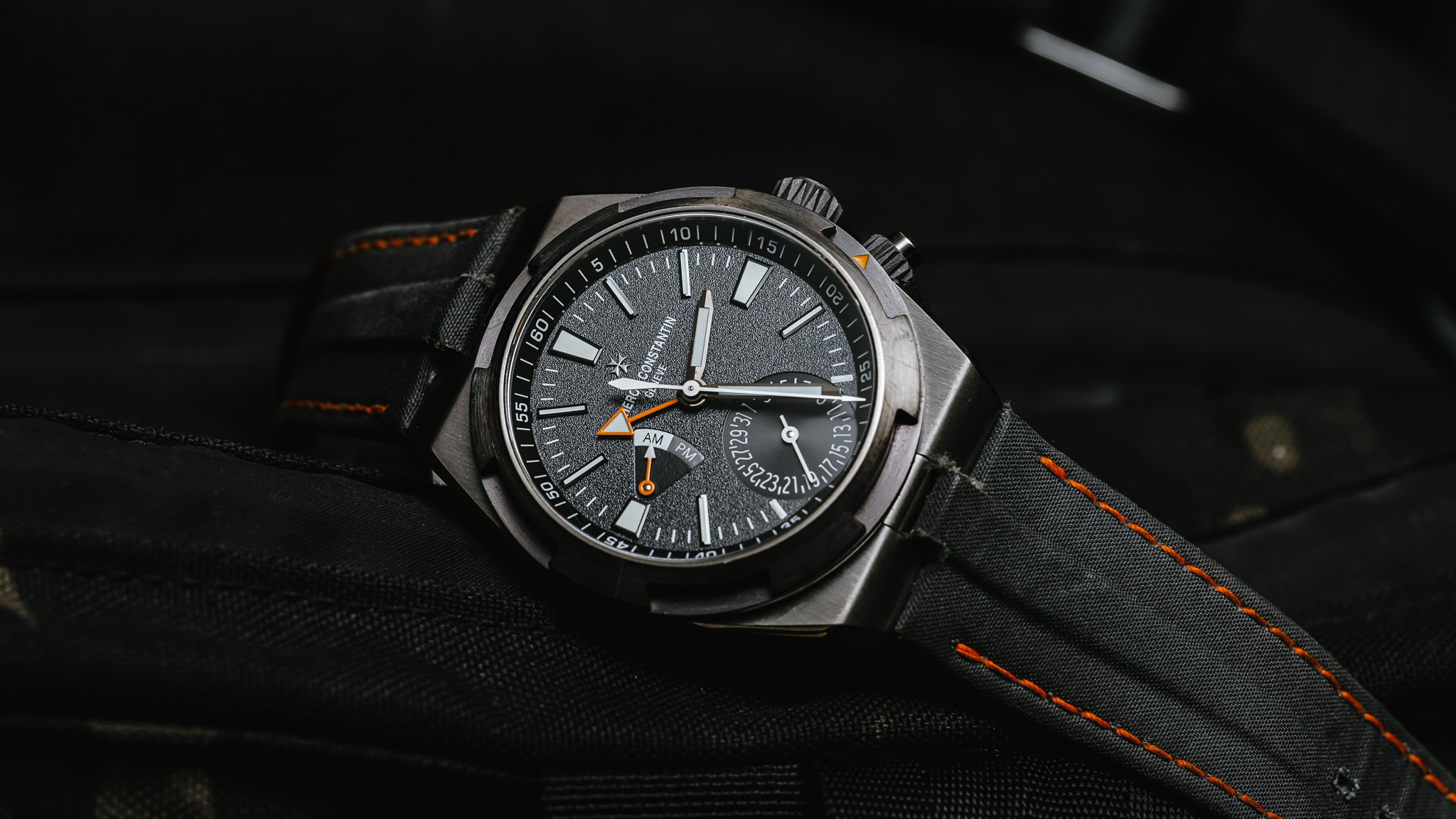 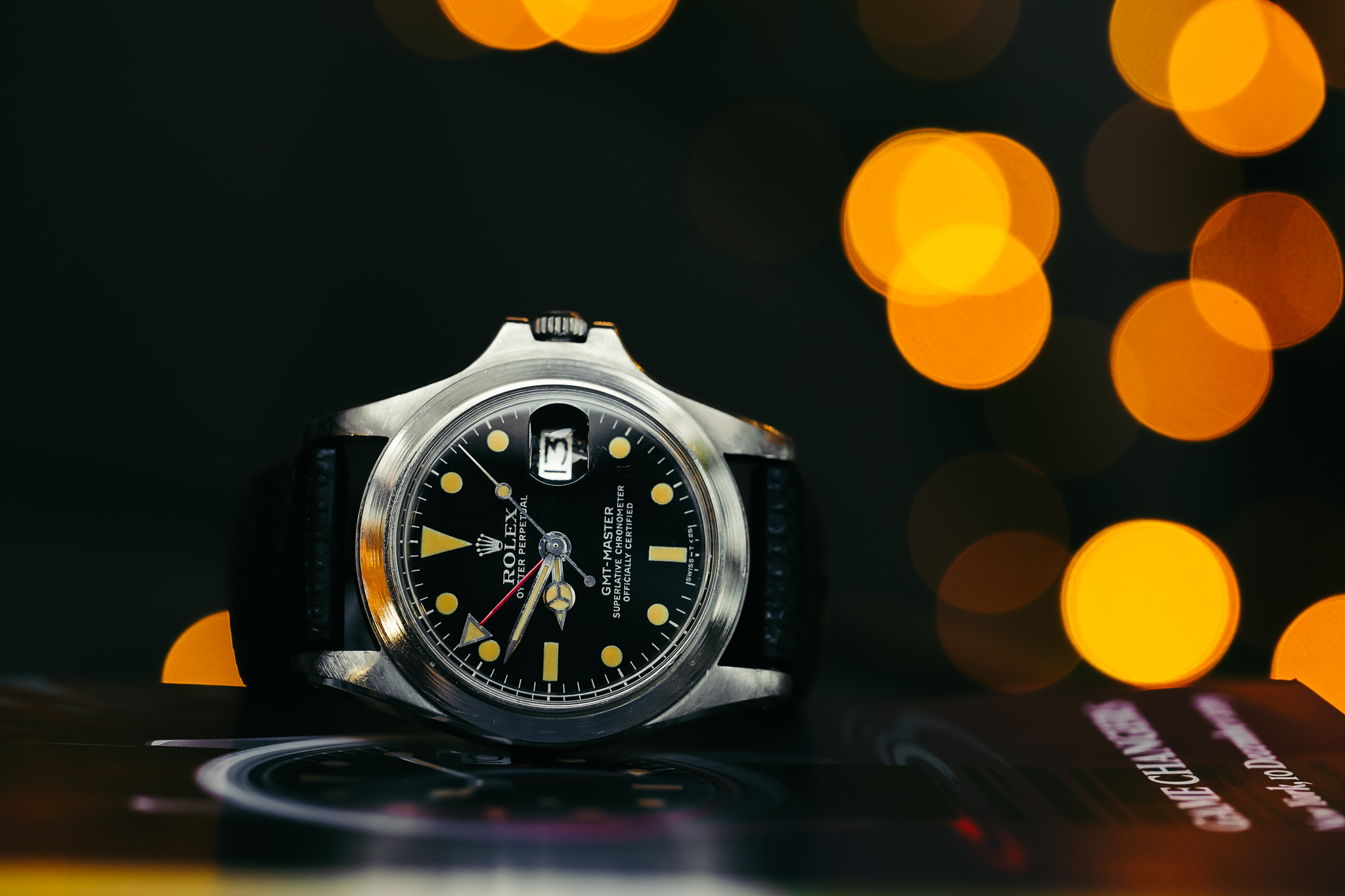 Sure, you might have heard that one of the last great “lost” watches of all time has just been found and is being auctioned off this December 10th by Phillips. Indeed, the remarkably well-preserved Rolex GMT Master worn by Marlon Brando in Apocalypse Now surfaced shortly after news broke of the record-breaking sale of the Paul Newman “Paul Newman” back in 2017. With that kind of provenance, it should come as little surprise that the Brando watch (sans bezel), together with a gold Rolex Day Date owned by Jack Nicklaus and a singularly unique Patek ref. 2499 are headlining the December 10th “Game Changers” auction, along with more than 70 other vintage and modern watches, each with its own unique stories and provenance. But after spending a recent evening at Stephen Silver Jewelers in Menlo Park with the aforementioned and a few other “game changers” also on world tour, we couldn’t resist a chance to pick out five of the auction’s sleepers that are absolutely not to be missed. 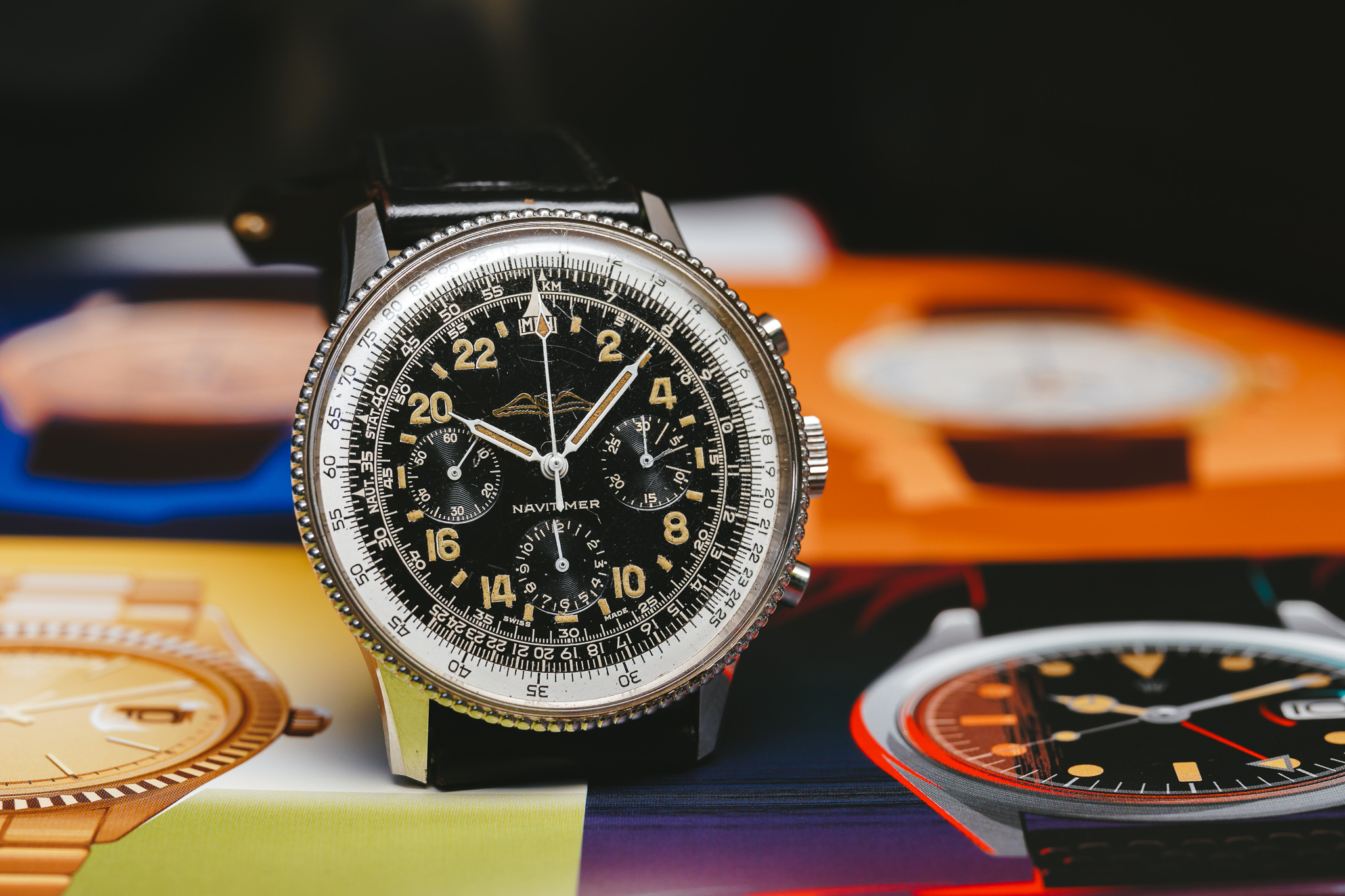 Phillips auctioneer Paul Boutros tends to choose his words pretty carefully, so when he called this “the most important Breitling to ever come up for auction,” we’re inclined to take note. By all appearances, the sentiment certainly seems on point: It’s a strikingly well-preserved early 1960s Navitimer 809 with Breitling’s signature slide rule bezel, and a 24-hour handwound chronograph movement — a configuration that carries the dual distinction of being designed with direct feedback by NASA’s earliest astronauts and, consequently, the first Swiss-made chronograph worn in space, most notably by astronaut Scott Carpenter. It’s not important solely because of those things, though — not even because it’s a rare 809 reference, rather than the more common earlier 806 reference Navitimers which were designed specifically for civilian pilots. It’s important because this was John Glenn’s personal watch. Glenn, of course, was one of the Mercury Seven: a team of military test pilots selected in 1959 by NASA to become the nation’s first astronauts. Glenn would then become the first American to orbit the earth, circling it three times in February of 1962. In short? It’s the first astronaut watch, worn by one of the first astronauts, and it just doesn’t get much cooler than that. 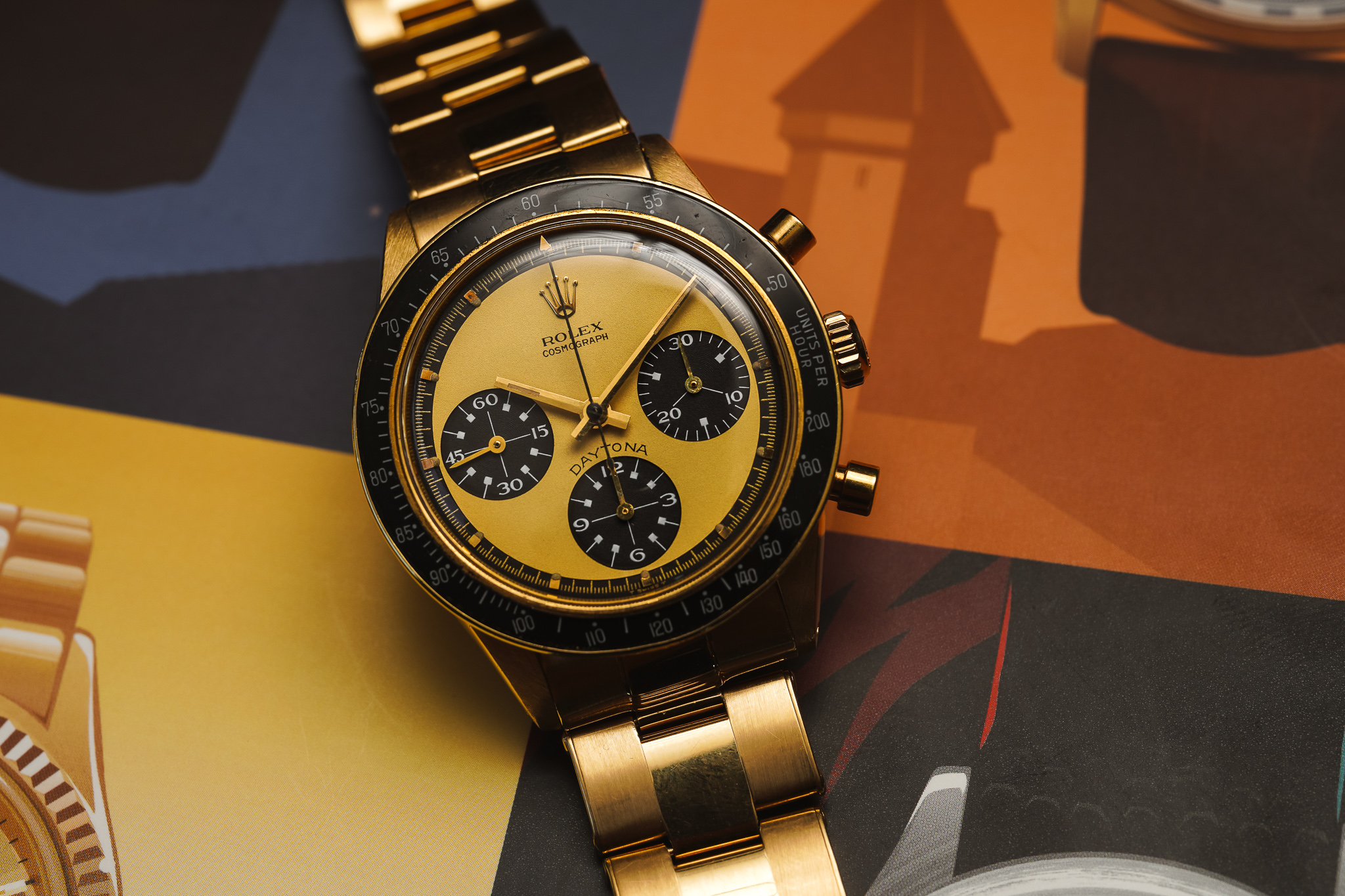 So, the most famous “Paul Newman” Daytona’s already been sold, but there are still a whole host of other interesting Paul Newman references to be explored now that the cat’s out of the bag. This “Game Changer,” in particular is an 18k gold 6264, coveted for its pump pushers and creamy yellow “lemon” dial — a particularly rare classification, as most gold Paul Newman Daytonas are seen with more metallic or champagne-colored dials. As usual with vintage Rolex, the real devil here is in the details — particularly those in the subdials, which use a high-contrast printed white color for the subdial squares and numerals in that classic Art Deco-style font that drives Rolex collectors crazy. A minor palette swap, for sure, but it does differ pretty dramatically from the tonal gilt printing found on the far more common references mentioned previously. Minute details aside, this thing is in gobsmacking condition and is just plain gorgeous. Like, drop-dead, refinance-your-mortgage gorgeous. Anyway, vintage gold watches aren’t exactly in short supply these days, but vintage gold watches that nail the game of tones while adding in the quirky provenance of the once-unloved, “exotic” Paul Newman dial and even include an official blessing of a Rolex service guarantee are about as rare as they come. 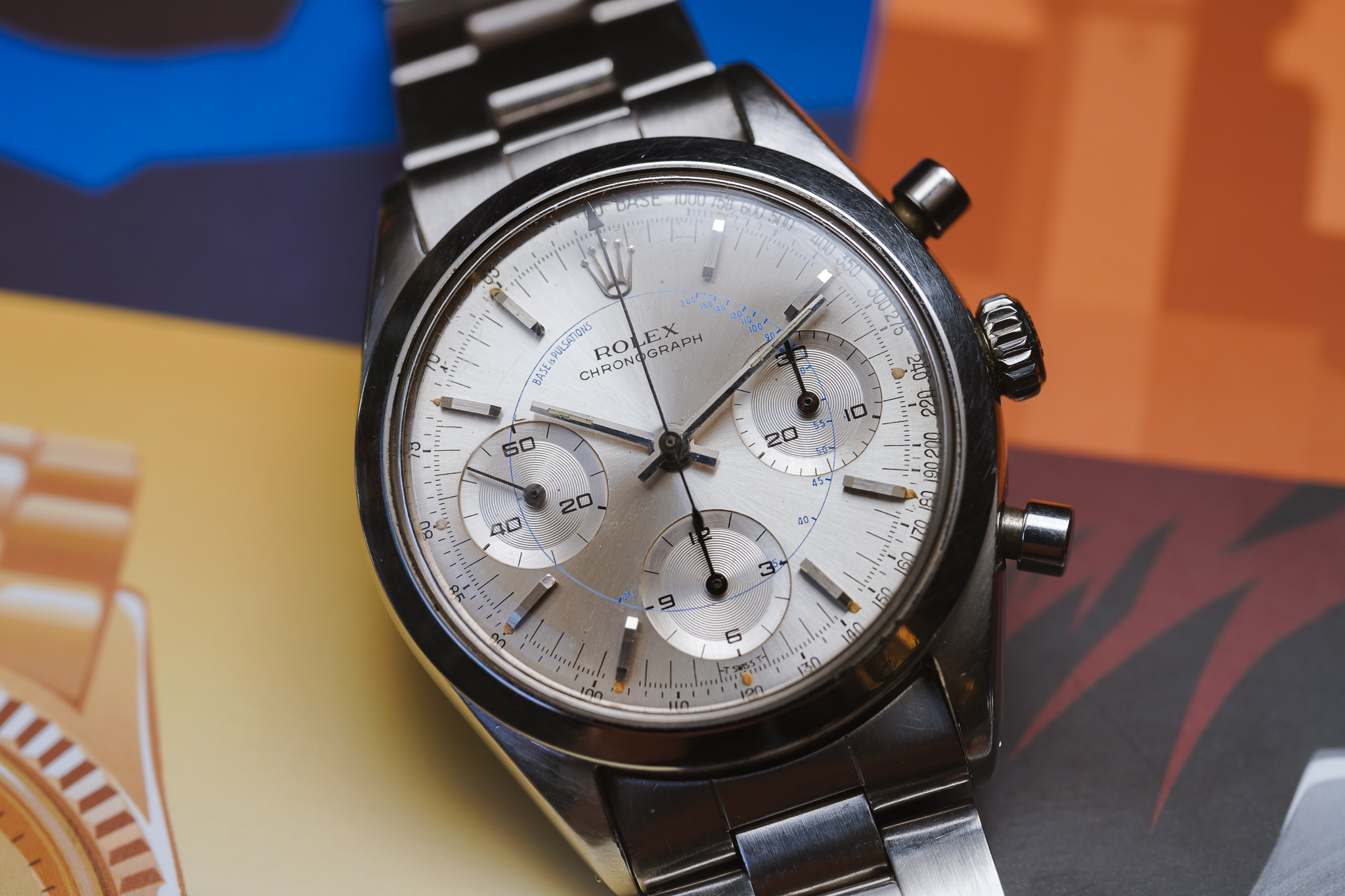 Speaking of hen’s teeth, not every rare vintage watch is one that exists in what is already understood to be the general pantheon of vintage Rolexes. Some are so rare that they defy even the history books themselves. Such is the case with this peculiar chronograph, which is one of only two publicly known existing references of its ilk: a lovely “pre-Daytona” reference from 1963 built for the American market, characterized by its silver sunburst dial with a light blue circular pulsometer scale circumnavigating its center and bisecting each of the chronograph registers. Bridging the gap between mid-century artistry and sport-casual modernity, it is simultaneously cool and quirky in a way that most “known” Rolexes are not, which is perhaps why we never saw more of these references again. It definitely makes one long for the days when the mightiest name in Geneva was a little more experimental. But for now, this impressively well-preserved specimen will have to do.

It’s hard to tell where Robert Downey Jr. ends and his Avengers character Tony Stark begins, but I honestly can’t think of a more fitting watch for either larger-than-life personality than an Urwerk UR-105. A hybrid of sleek science-fiction design and old-school haute horology worthy only of one who could have the stones to call himself “Iron Man” straight to the face of humanity’s greatest foe, this stealthy masterpiece (don’t miss David’s comprehensive hands-on review right here) hides the majority of its complex turbine winding system and innovative satellite time display under a sculpted titanium hood. Proof that this watch was built exclusively for the film to be worn by its pivotal hero, this reference bears a bold “ENDGAME” engraving on the underside of the hood. But the real boss detail here is a lot more subtle: flip the watch over, and just between the twin-winding turbines in place of a numbered serial on the caseback, you’ll notice it says “RDJ,” so you know this ain’t just any old film prop.

I’ll make no attempt to hide the fact that this isn’t just my favorite watch in the Game Changers auction, it’s my favorite watch of the year — and Vacheron Constantin only made one. Granted, they certainly put it to good use — on the wrist of National Geographic photographer and alpine climber Cory Richards, who wore it on a pioneering Mt. Everest summit attempt via a new route: the harrowing Northeast Ridge on the mountain’s Tibet side. Ultimately, adverse weather near the top prevented a successful bid, but it makes little difference to this Overseas prototype, which gets all the details right: an ultra-light titanium case reinforced with tantalum crown guards, an experimental Ventile cotton strap (this is the strap configuration worn on the mountain), a cool textured grey dial with blackened gold indices, and an orange 24-hour hand — the proverbial cherry on top of what feels like a love letter to the bygone era of analog exploration. It’s powered by the same Geneva Hallmark-certified 5110 DT calibre deployed in Vacheron’s other Overseas Dual Time references, but this one’s been finished with a 22k gold winding rotor engraved with a relief of Everest, taken from one of Richards’ own photographs.

The end result is so convincing in its execution that it actually feels strangely antithetical for Vacheron to be making a watch that represents such a stark contrast to the semi-precious, jewelry-like nature of its standard Overseas. Hell, this alone is probably what makes it so appealing to so many collectors, especially since no other member of the “holy trinity” has ever made an honest-to-god tool watch that could be taken seriously by any actual explorer. The real question here, though, is whether or not Vacheron plans to reproduce some variant of this edition for the rest of us. My gut says “yes,” but many industry insiders are already saying “no.” We’ll just have to settle this one when SIHH 2020 rolls around. 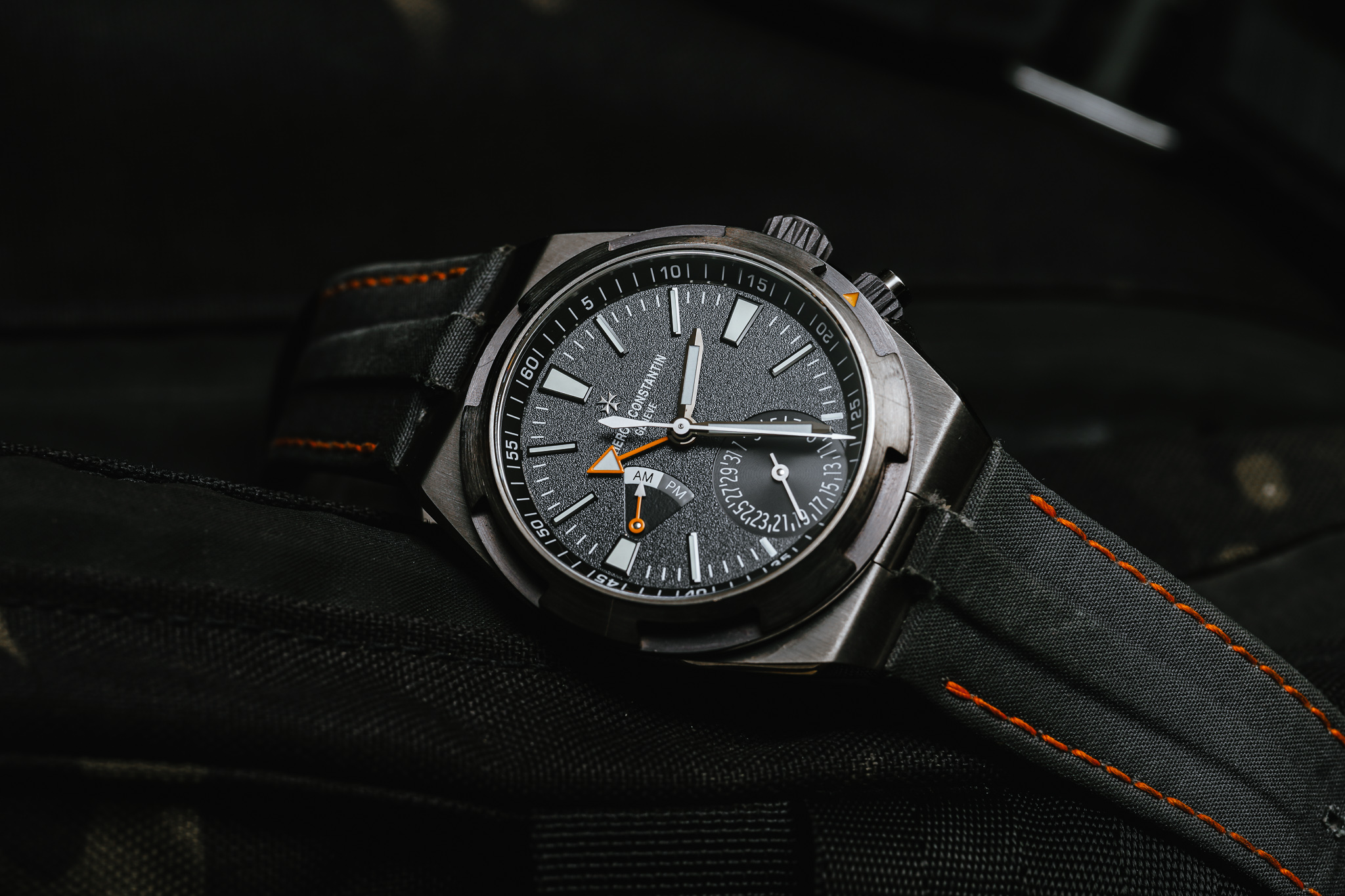 Discover the rest of the references being listed in the December 10th “Game Changers” auction right here at phillips.com.