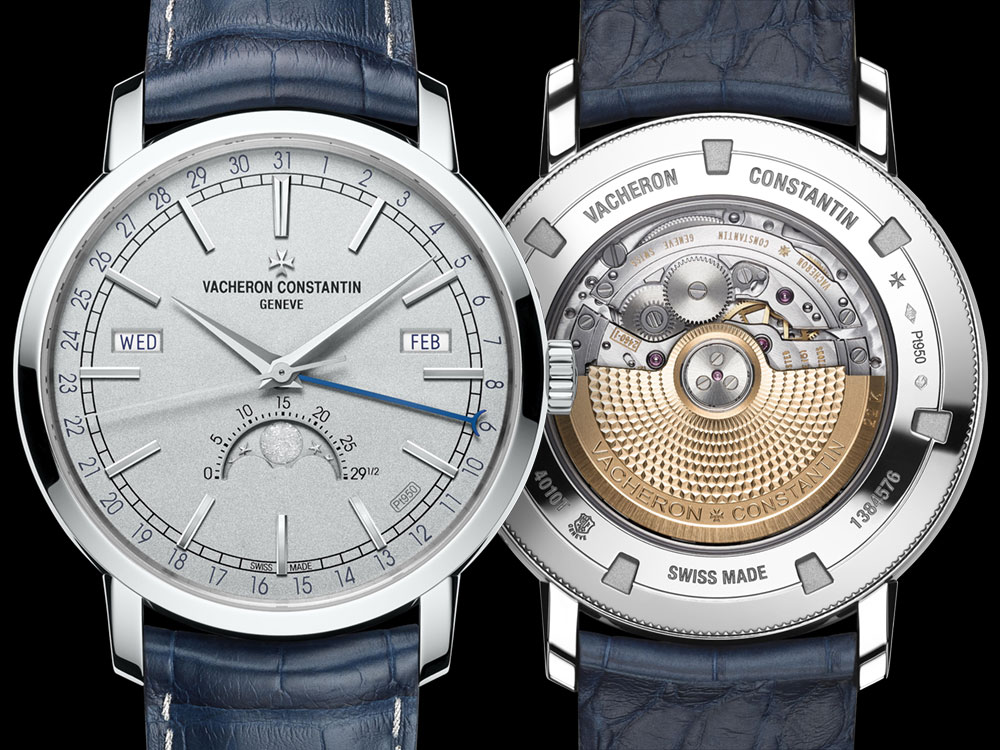 Geneva-based manufacture Vacheron Constantin have been releasing platinum dress watches as part of their Collection Excellence Platine since 2006. The collection has ranged from very simple models such as the time-only Patrimony from earlier this year, to the Patrimony Perpetual Calendar from 2016. The Vacheron Constantin Traditionnelle Complete Calendar Collection Excellence Platine watch offers a cumbersome name and some of the key functionality of the previous perpetual models at a less eye-watering, albeit still top tier luxury price point. 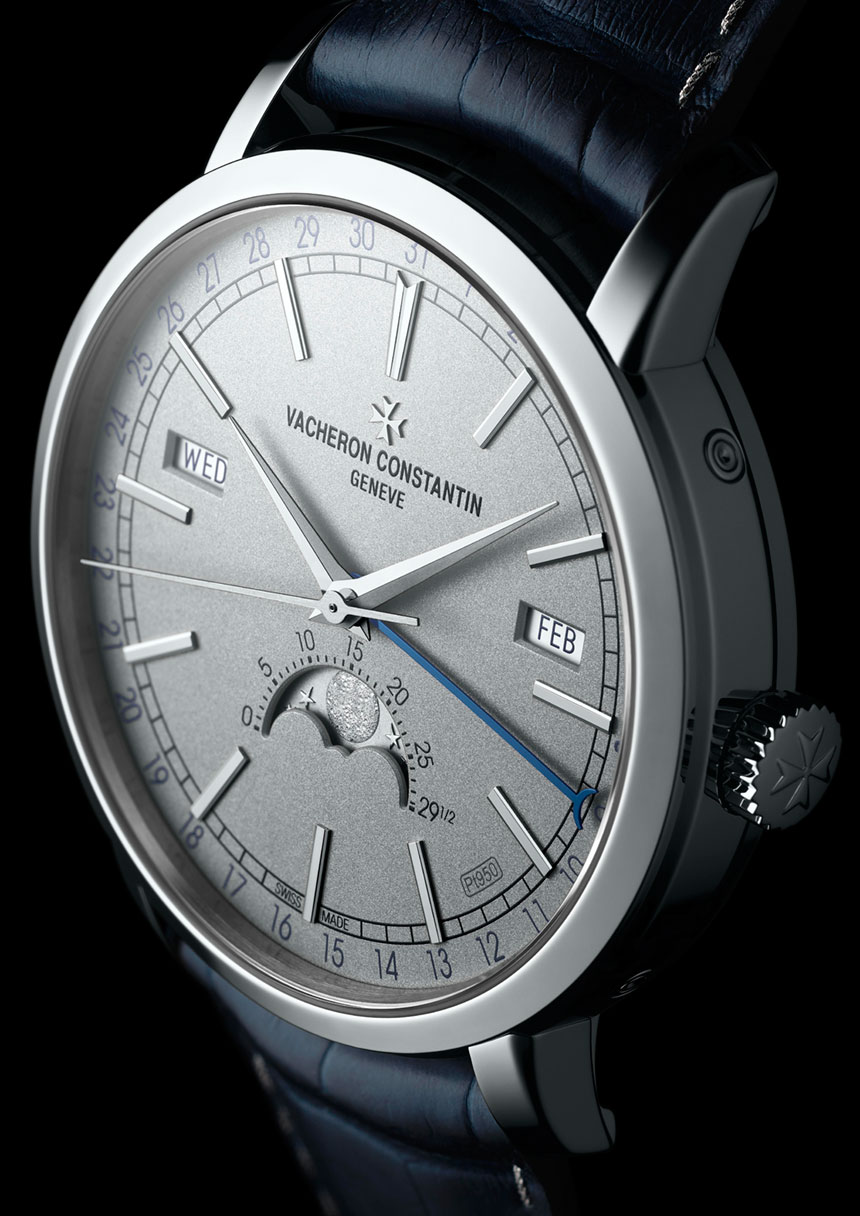 The use of platinum as a pinnacle precious metal is very much the focus of this collection. “Platine” in the model name and a not-so-secret “Pt950” signature on the dial at 4:30 give ample indication that this is most certainly not a steel nor even a white gold watch. Pt950 stands for “Platinum 950” and indicates both the dial and case is 95% platinum and 5% alloying metals, which is significantly purer (and thus more expensive) than an 18ct white gold case, which only uses 75% gold – though, to be fair, Pt950 is the industry standard alloy. As such, the “Platine” variant is as heavy as it can get, an attribute some find to be luxurious, while others to be annoying. 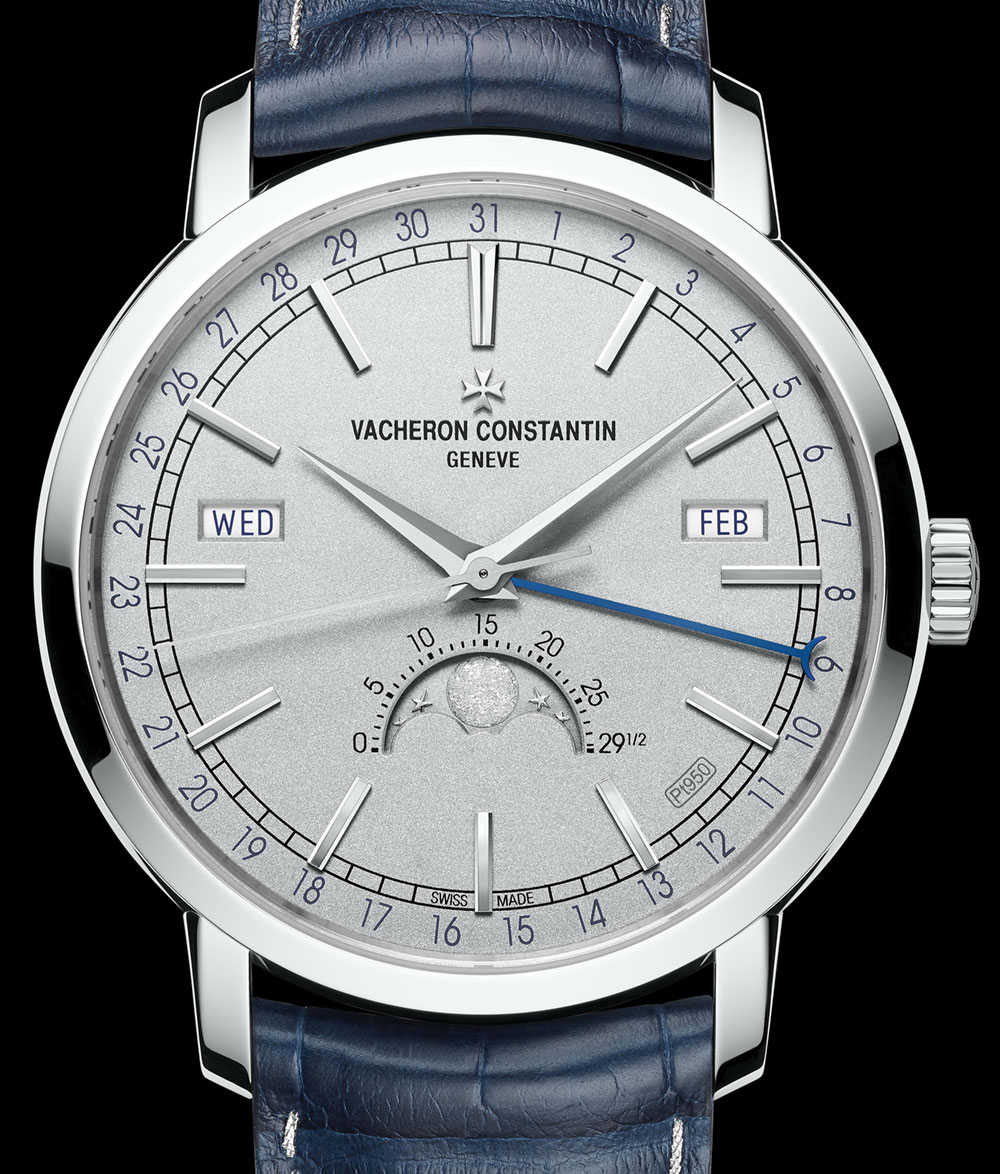 The dial of the Vacheron Constantin Traditionnelle Complete Calendar Collection Excellence Platine is quite clean and legible for a full calendar, thanks to the symmetrical placement of the apertures for the day and month above the 9 o’clock and 3 o’clock hour markers, in place of the more commonly used sub-dials. A blued hand for the pointer-style date further assists legibility and reduces dial clutter, keeping the overall design simple and elegant.

The dauphine-style hands, Maltese cross logo and “bâtons de Genève” hour-markers (a fancy name for sticks) are notably not made of platinum, but rather 18ct white gold. The main reason for this might be that the machines used to produce hands and indices are set up for gold and not platinum – such small pieces would be incredibly difficult to craft from platinum, possibly the most challenging metals to work with in the luxury watch industry. Still, at this price point it could have a been a small, but neat touch of added attention, that would have worked well with the Pt950 bloating on the dial. 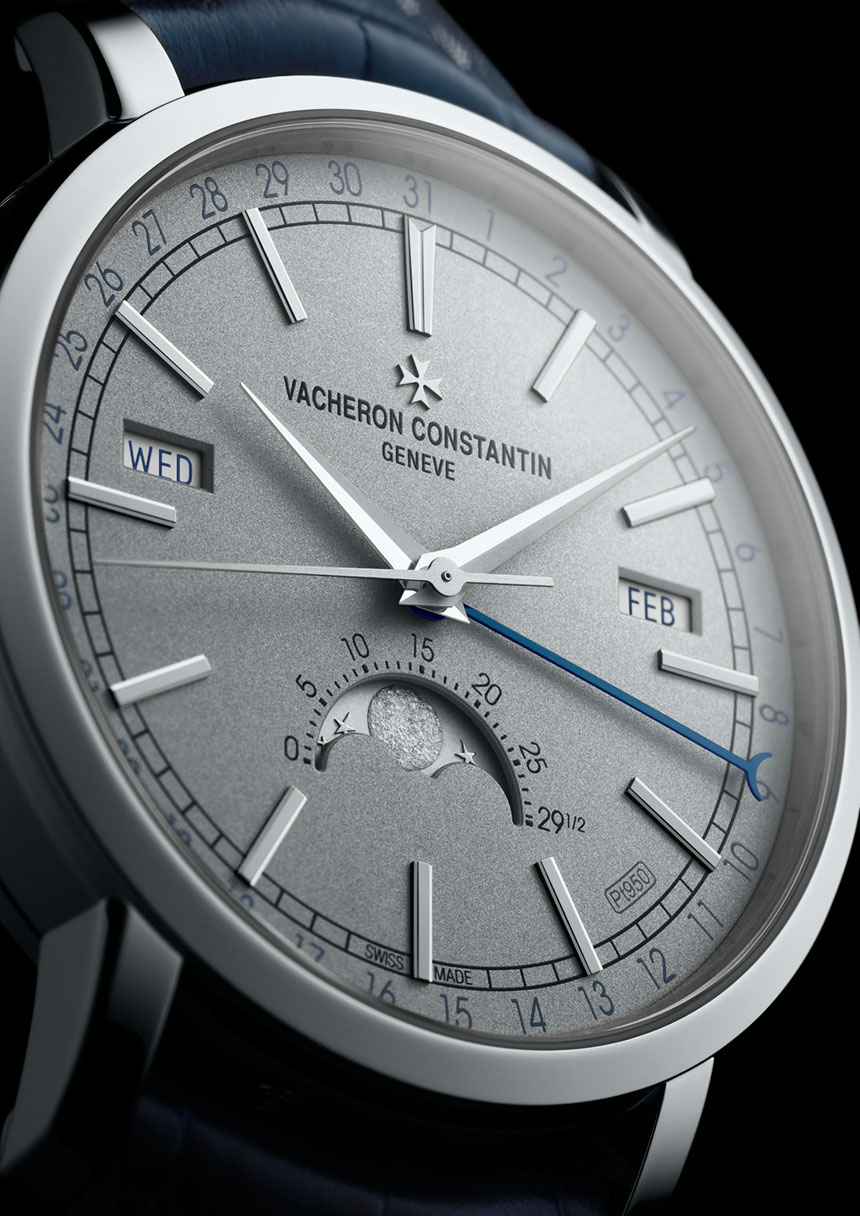 A railroad minute track runs the periphery of the dial, with a well-proportioned minute hand reaching all the way to said track and the hour hand sitting comfortably just inside the hour markers. Too often manufacturers compromise legibility with hands that are just a tad too short or too long, a minor qualm perhaps more aesthetic than practical in nature, but one we thankfully don’t have to quibble about with the Vacheron Constantin Traditionnelle Complete Calendar Collection Excellence Platine. The hands and hour markers are bi-faceted, which should provide a play of light and some visual interest on the otherwise sandblasted platinum dial. 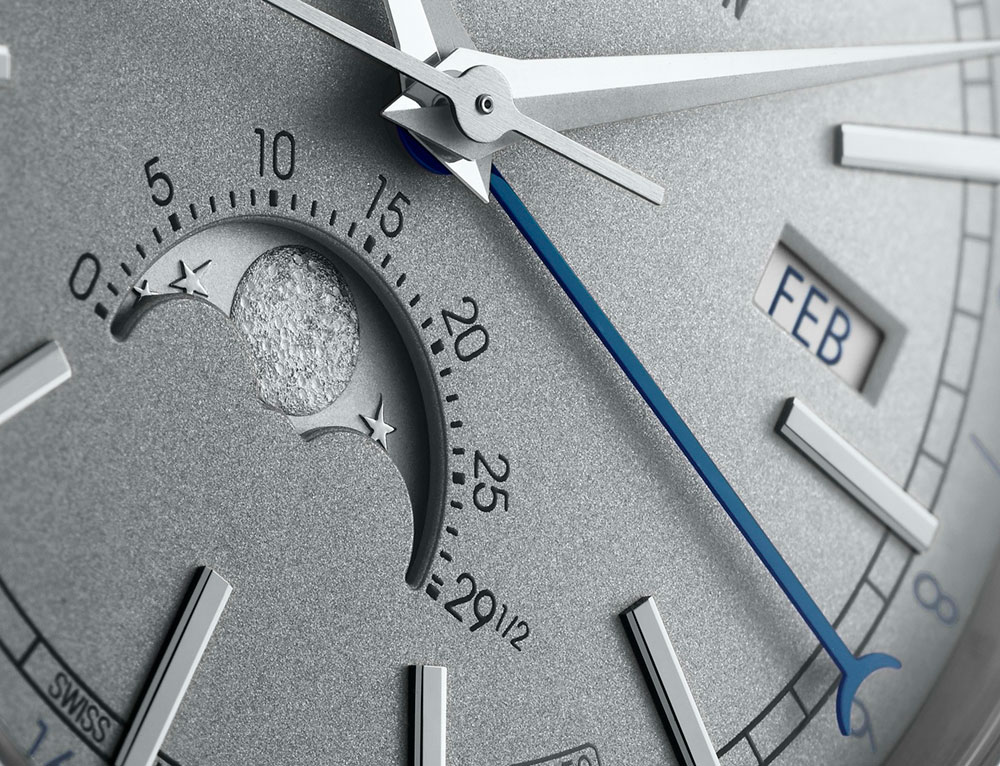 At prime position near 6 o’clock on this dial is the moon phase indicator, which uses a mechanism more precise than the standard ones, as it takes over 122 years for it to be off by a full day. We know that’s an arbitrary way of determining the accuracy of a moon phase display, but accuracy certainly isn’t the real reason for the popularity of this “poetic” display.

The moon face itself is made of platinum (like most aspects of this timepiece) and the indicator also displays the age of the moon in 5-day intervals. This is a rather unusual feature and provides a measurement of exactly how many days the moon has progressed through its 29.53-day cycle. The background of the disc is adorned with applied stars, presumably also in platinum although Vacheron Constantin haven’t specified as such. 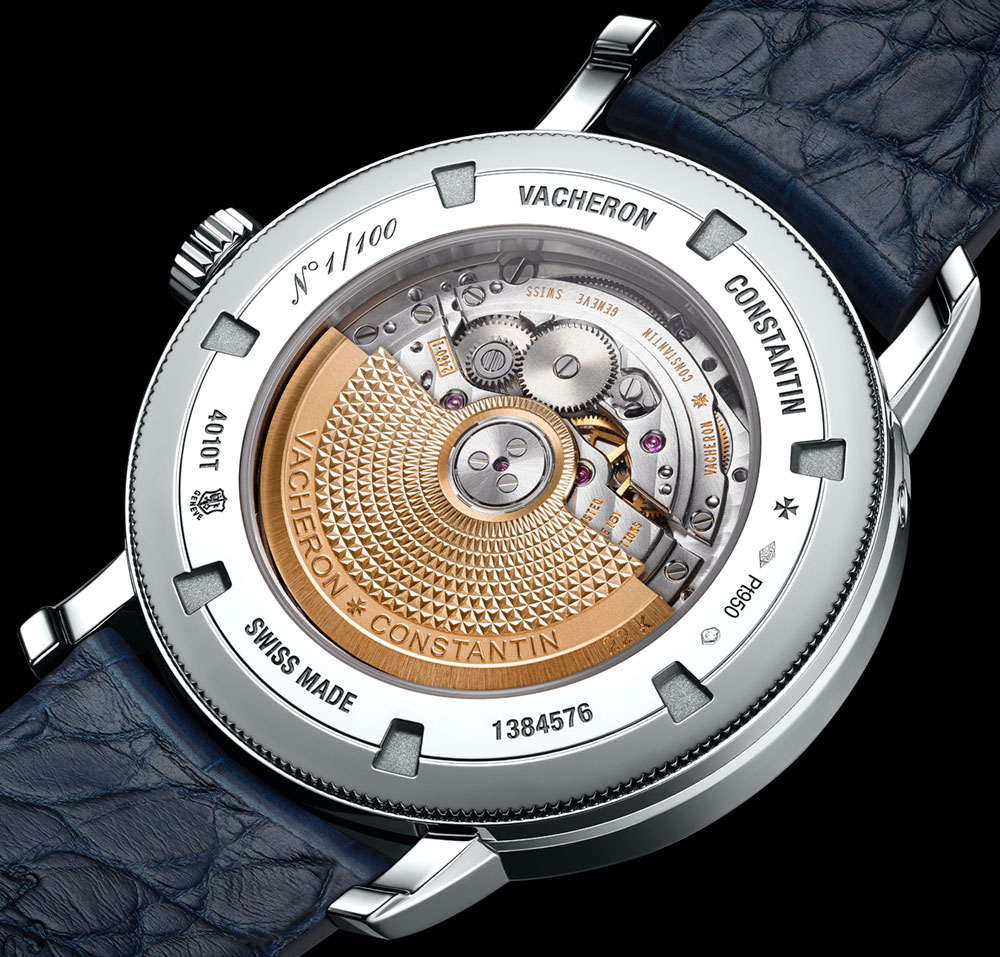 The case of the Vacheron Constantin Traditionnelle Complete Calendar Collection Excellence Platine Watch measures 41mm by 10.72mm, which should wear quite comfortably and easily slip under a shirt cuff. Water resistance is rated to 3 bar, or 30m, suitable for spilled drinks or a quick dash through the rain, but certainly not a watch you’d want to wear to the beach – it’s not as though platinum beach watches are otherwise a thing anyway.

The lugs appear to be nicely curved to hug the wrist, and attach the watch to the included dark blue Mississippiensis alligator leather strap. Speaking of the strap, the leather is hand-stitched using a combination of silk and platinum thread, and is secured with a half Maltese cross-shaped folding clasp in 950 platinum. When you read the sticker price at the end of this article, counting the number of times I’ve mentioned “platinum” might help make it easier to digest. 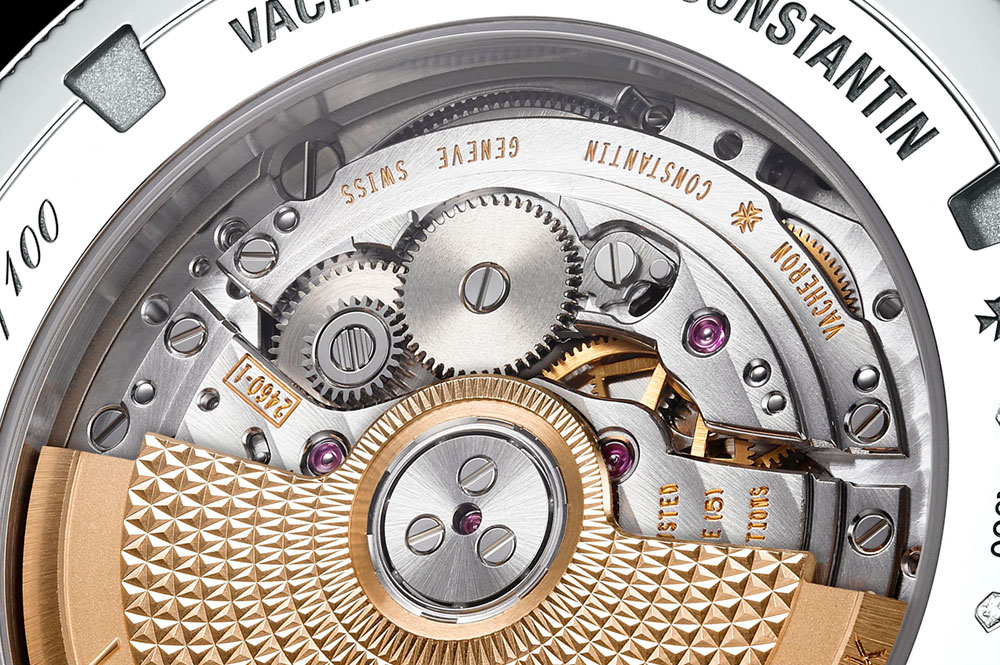 Through a sapphire exhibition case-back, the beautifully finished Calibre 2460 QCL of the Vacheron Constantin Traditionnelle Complete Calendar Collection Excellence Platine is revealed. This is a Hallmark of Geneva certified movement that meets all the exacting finishing standards required by “the Seal”, along with a 22ct yellow gold rotor which provides an eye-catching contrast from all the silvery white and blue accents. The movement oscillates at a modern 28,800vph, or 4Hz, is comprised of 308 components, and offers a 40-hour power reserve. For a complete calendar which can be fiddly to reset, I would have liked a longer power reserve, or an indicator to warn the wearer when the reserve is almost depleted. But provided the wearer is relatively active or keeps the watch on a winder, this shouldn’t pose much of a problem. 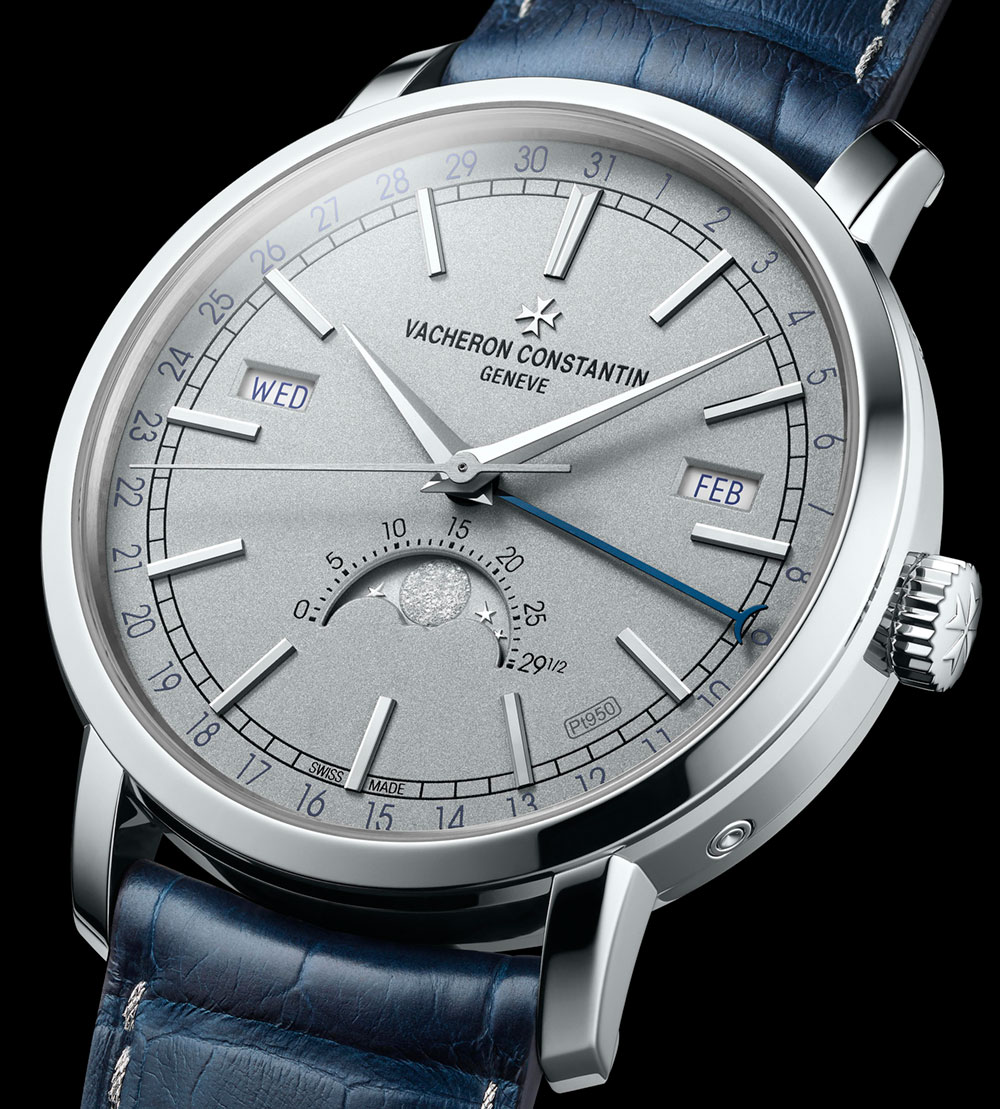 Vacheron Constantin aren’t presenting anything too innovative with this timepiece, but perhaps they don’t need to. The complete calendar complication offers a lot of the functionality included with their Perpetual Calendar models at almost half the price, which is a fair trade off for having to set the date every other month. As a limited edition run of 100 pieces, I doubt the brand will have difficulty finding buyers. The Vacheron Constantin Traditionnelle Complete Calendar Collection Excellence Platine watch, reference 4010T/000P-B345 has an asking price of $68,500. vacheron-constantin.com