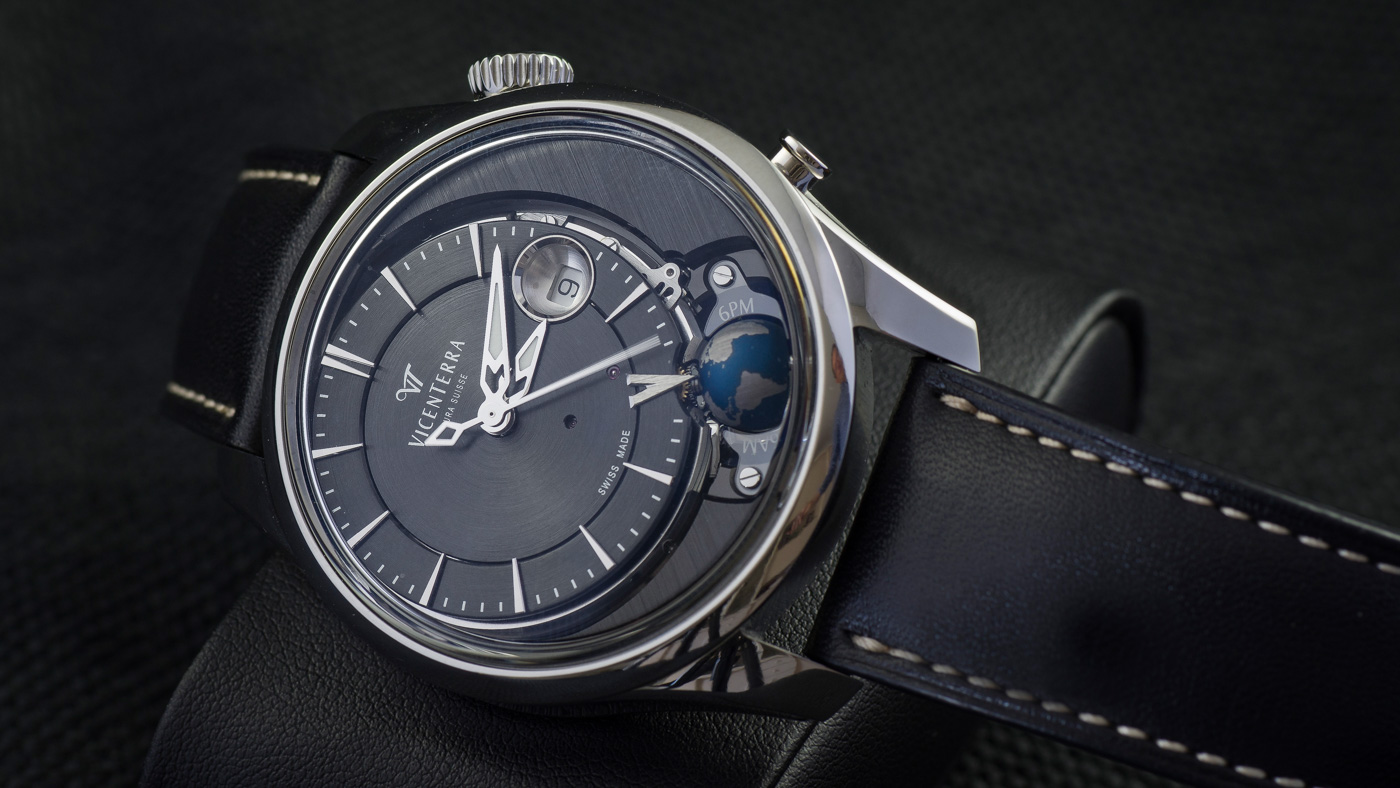 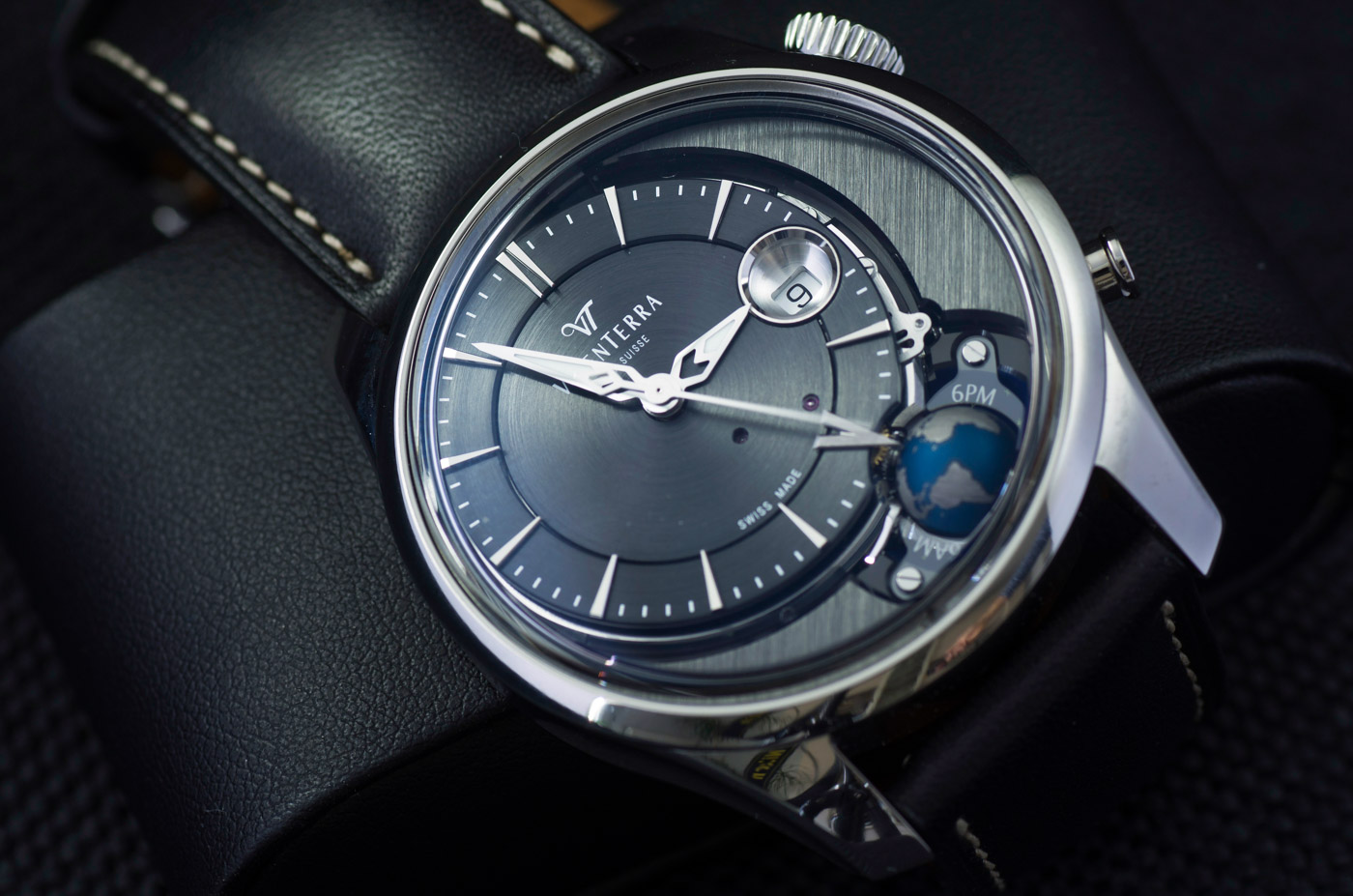 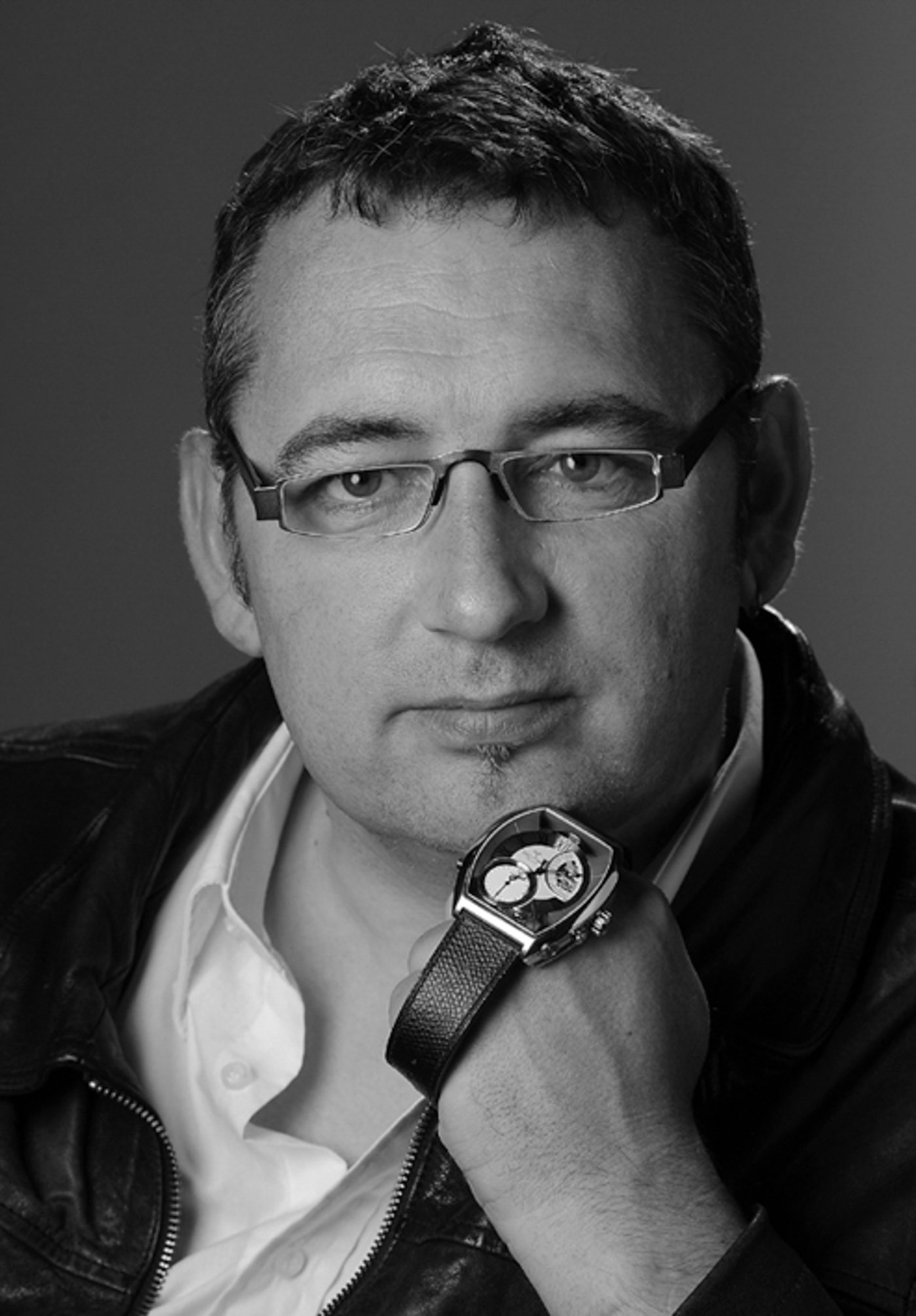 Vicenterra, conceived by the engineering-minded Vincent Plomb in 2005, is a genuinely Swiss independent watchmaker that thrives on its creative approach to watch and movement design. Following a career in micro-mechanics, Vincent began drafting his horological ideas in 2005. Years of refinement and prototyping later, 2010 saw the first Vicenterra timepiece emerge, followed by a range of special editions and, in 2017, the Tycho Brahe T2. 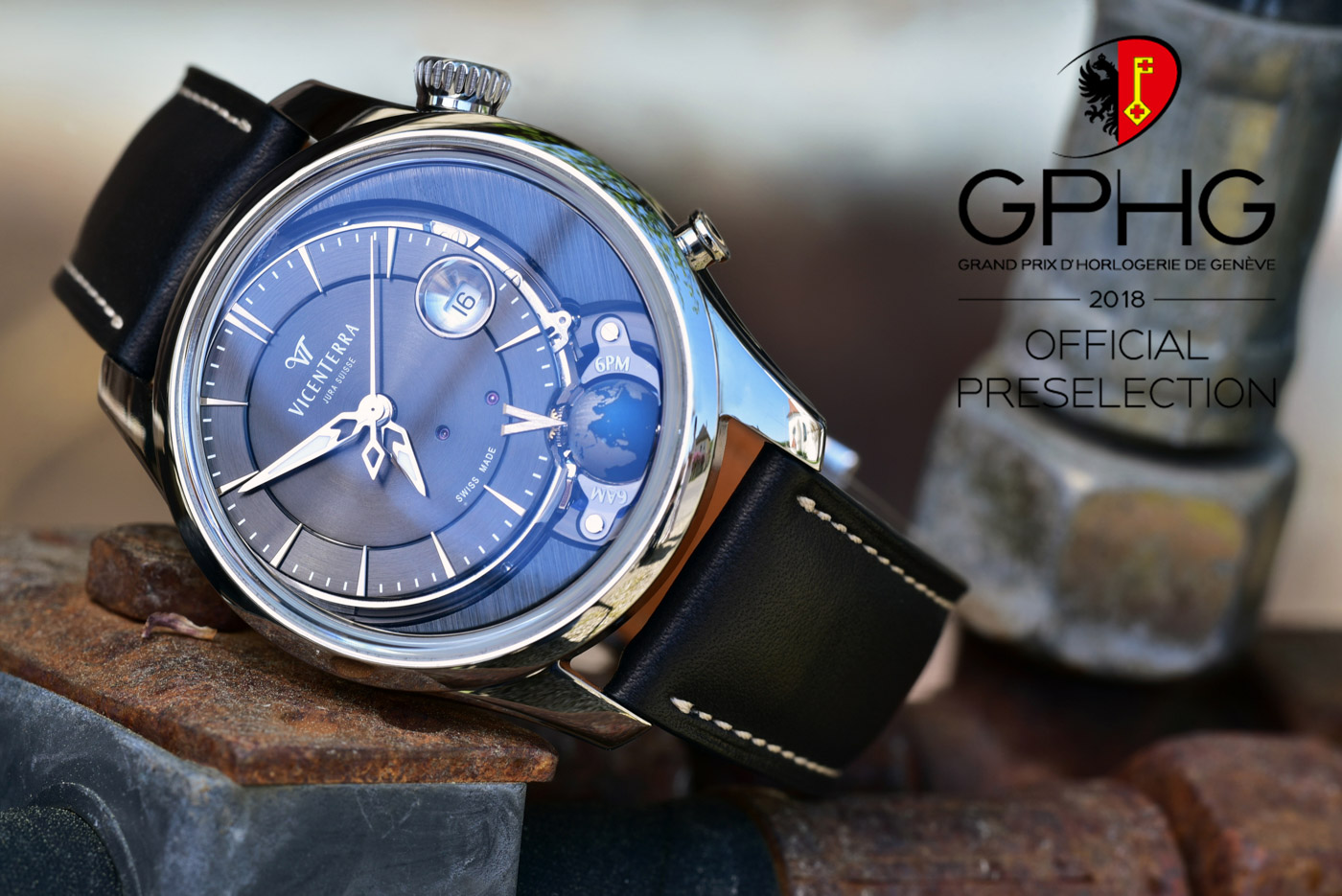 What’s special about the Vicenterra Tycho Brahe T2 is that it has taken the small manufacture’s defining components, such as its revolving, three-dimensional, beautifully crafted and ultra-lightweight globe, and placed it in a much more compact and yet more wearable package. Safeguarding the 7.50mm-diameter titanium globe is an elaborately finished titanium case that measures 42.80mm-wide, 51.64mm-tall (lug-to-lug) and a comfortable 11.70mm of maximum thickness.

The globe makes a full rotation around its axis in 24 hours but can also independently be adjusted in 24 increments with a pusher set into the case at its 4 o’clock position. As such, the titanium globe can serve as an indicator of a second timezone, or an AM/PM indicator of one’s local time. This is made possible by a V-shaped arrowhead that points at the center of the globe. Notably, this “V,” along with the uniquely shaped frame of the date window and the applied hour markers, is crafted from solid PD210 18k white gold. 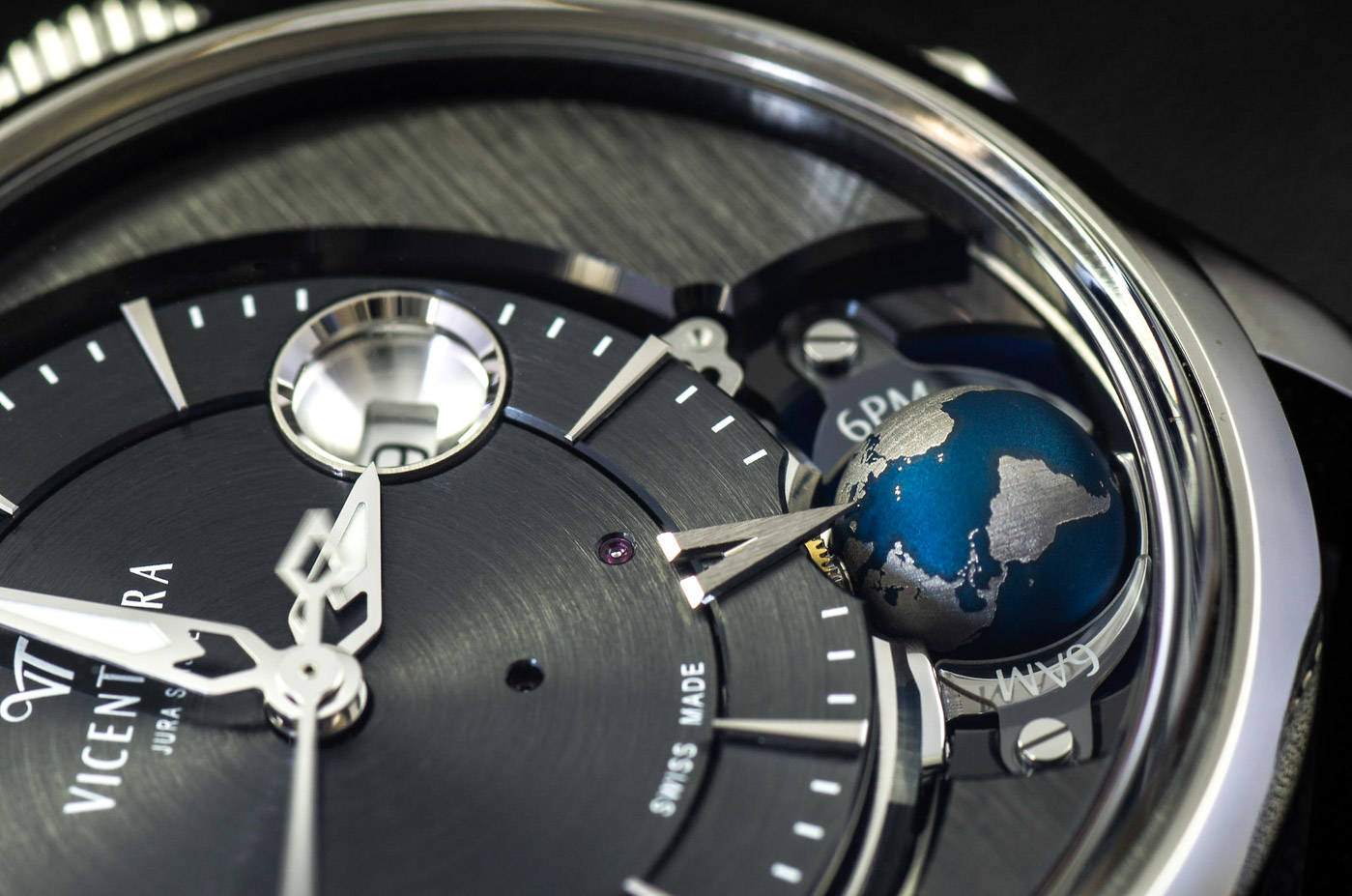 An Invitation To Travel

This watch is an invitation to travel — not just around the world but also within the world of watchmaking itself. Vicenterra has taken the concept of having this intricately made, three-dimensional, properly functional globe and placed it in a watch within the sub-$5,000 price segment. Based on a dependable and powerful ETA 2892 automatic caliber of “Top” grade, Vicenterra’s own unique modular system adds multiple levels of complication to this caliber.

Take as close a look as you wish: The details of the Top-grade ETA caliber with its bespoke winding rotor, the Swiss-made and beautifully finished titanium case, and every detail of the globe — revealed on the front as well as on the caseback by its dedicated sapphire aperture — is a most honest invitation into the world of Swiss independent watchmaking. 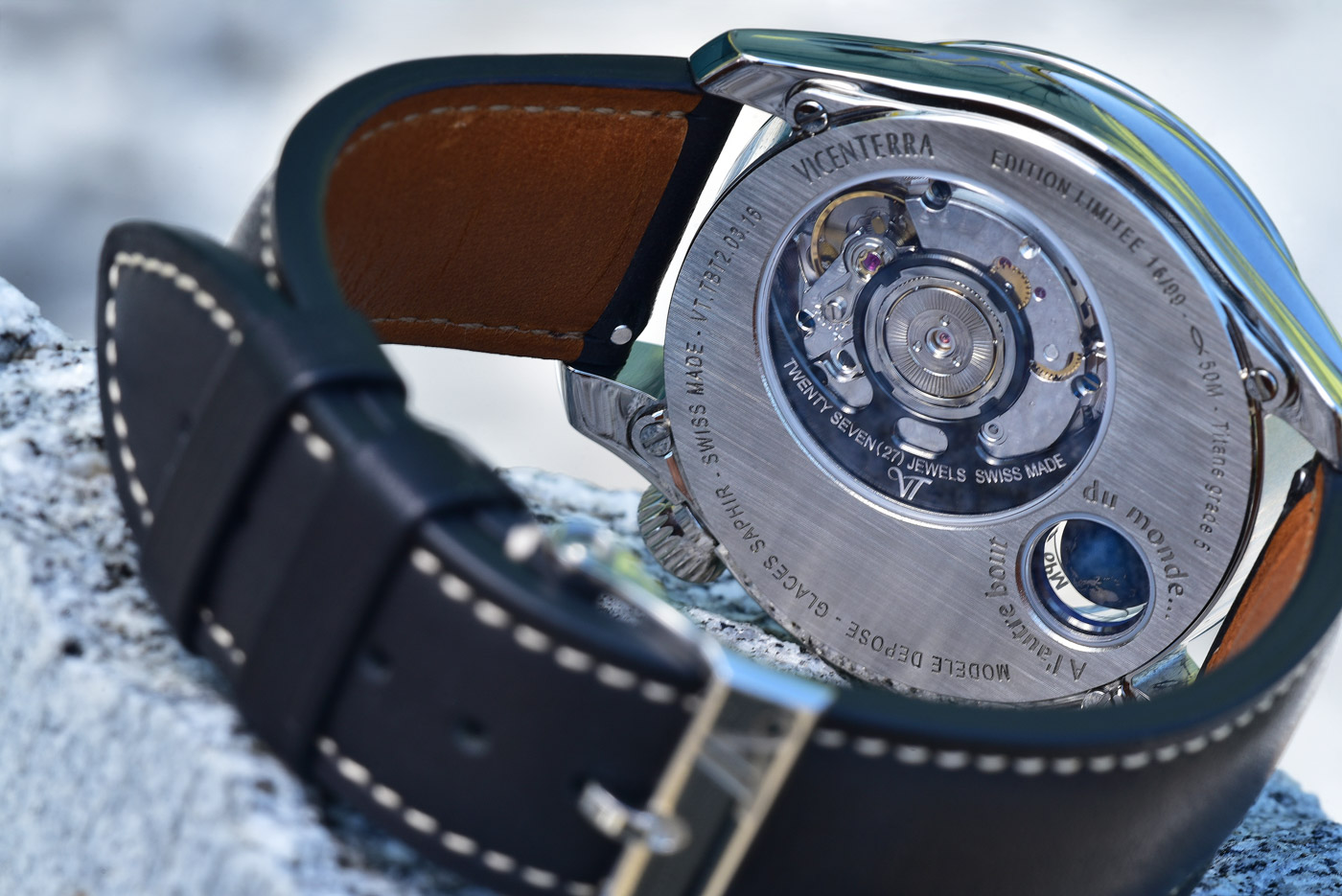 Vicenterra watches are designed in Boncourt, then made and assembled in the La Chaux-de-Fonds and Porrentruy areas. Each design is, therefore, more than 95% manufactured in the Swiss Jura by craftspeople and companies with exceptional know-how and expertise. In other words, Vincent’s creative concept and uncompromising focus on quality allows the Vicenterra Tycho Brahe T2 Anthra to serve as one of the finest examples of just how much is possible for a Swiss independent to achieve. 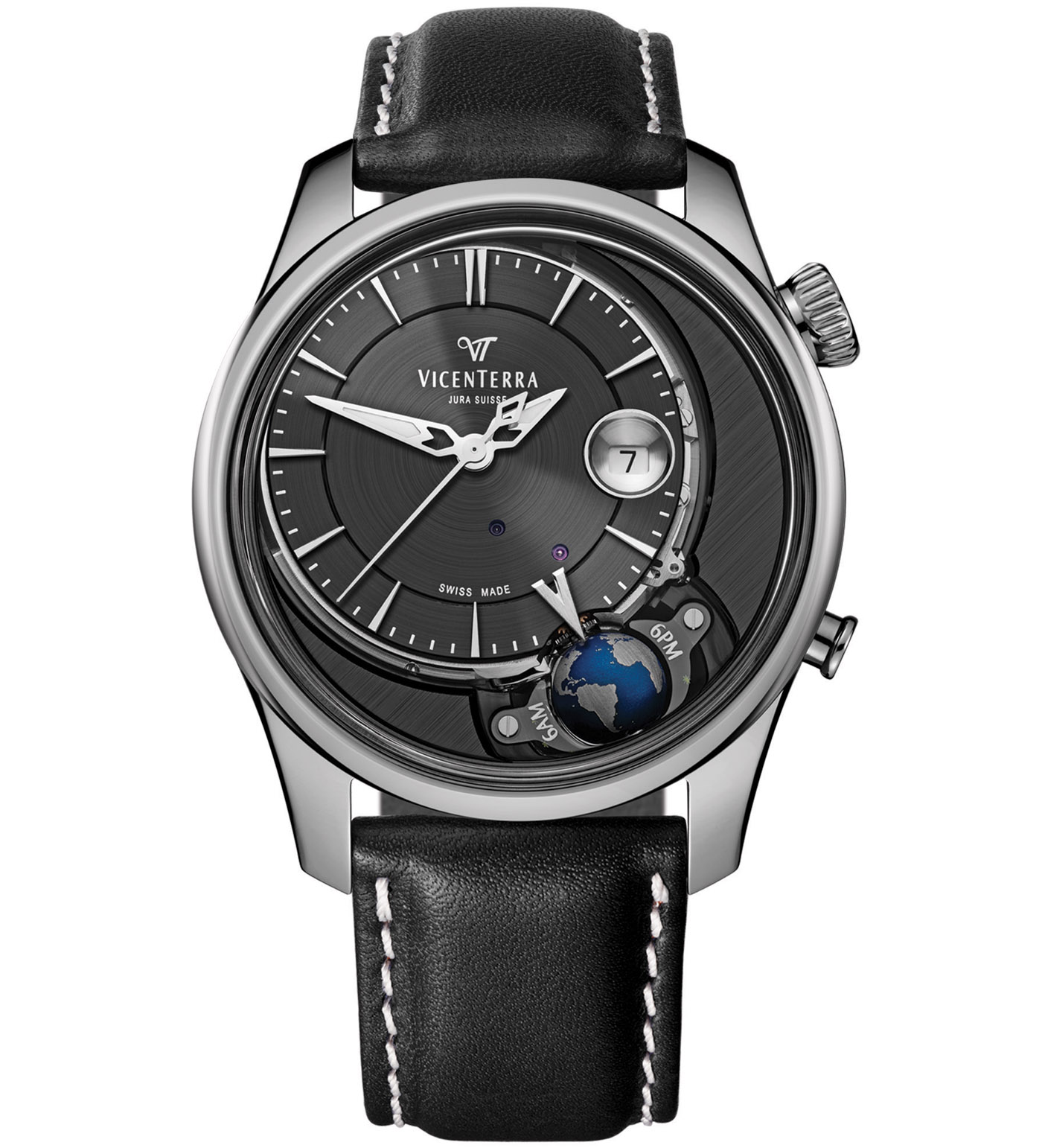 Despite its unique feature set, the Tycho Brahe T2 Anthra was designed to perform perfectly as one’s everyday watch. The compact and lightweight titanium case with its downwards turned lugs, combined with a supple calf leather strap and titanium pin buckle, all make for ideal long-term wearing comfort. Legibility is a core component of any well-made watch, and the Anthra continues to feature minute markers and large, luminescent hands over its dial, which appears to float free from its surroundings.

The rest of the front of the Tycho Brahe T2 Anthra is made up by dark rhodium plates that feature a 45° brushed decoration and long, sweeping, polished bevels. A play of textures, colors, and shapes renders the Tycho Brahe such a calming yet fascinating sight. 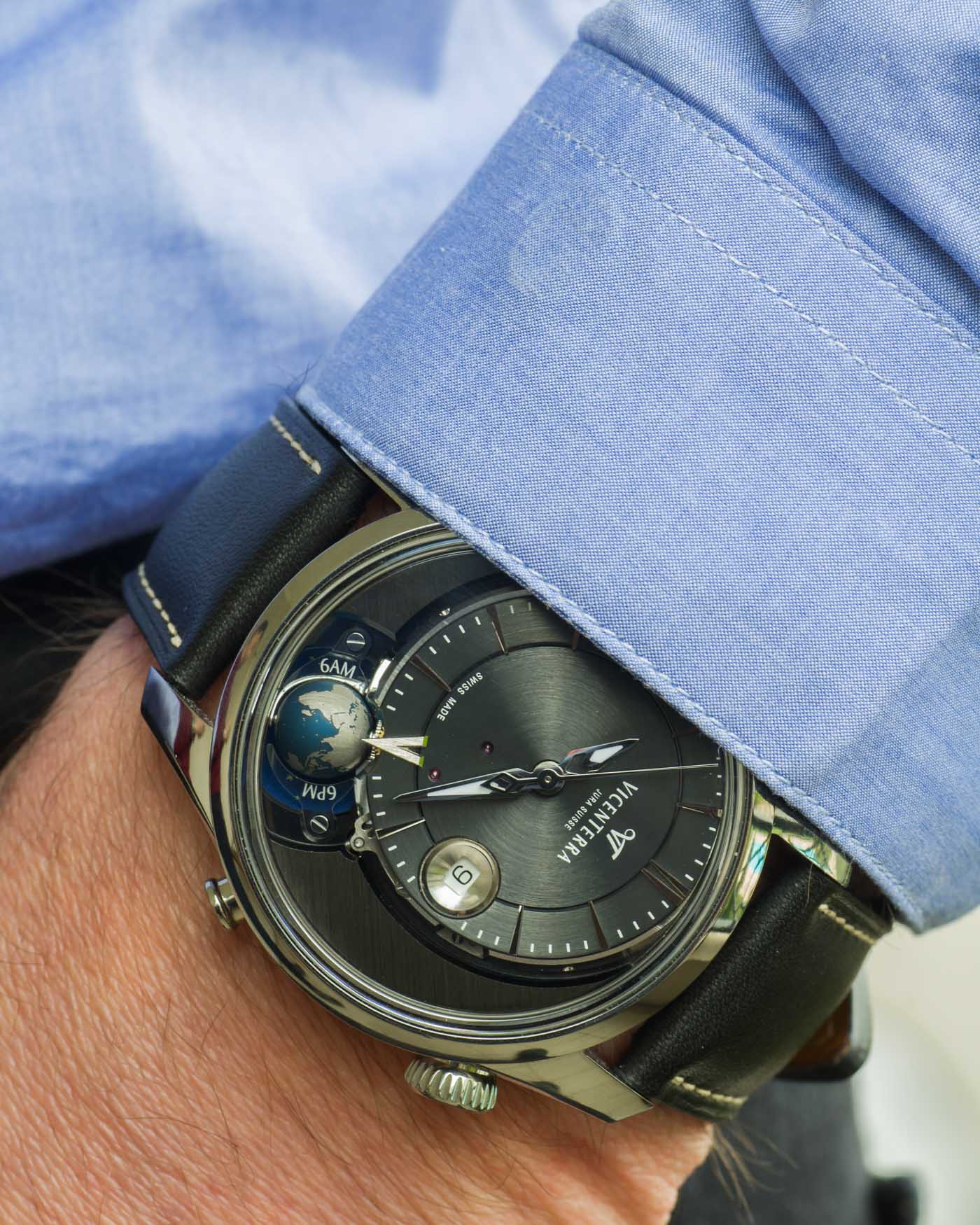 Pricing & How To Buy

Limited to 99 pieces and priced at CHF 4,814 (before tax), the Vicenterra Tycho Brahe T2 Anthra watch is a unique, yet already proven, proposition in the microcosm of truly creative and genuinely Swiss watchmaking. Vicenterra currently has representatives in New York, Montreal, Paris, Geneva, Cologne, Saint Petersburg, Singapore, Brisbane and Spain, but you may also order directly and learn more at vicenterra.ch.