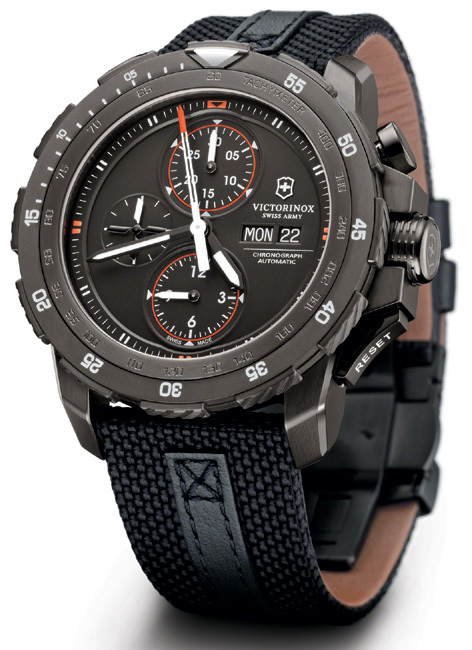 This is the newest watch from Victorinox Swiss Army, but I am not sure I recognize it as a Swiss Army watch. Over the last few years Swiss Army watches have been changing a lot. Not only in style, but also in terms of the types of watches they are offering. I mostly think of them as offering really nice quartz watches that are a great value for $300 -$500 bucks. But this Alpnach Black Ice Chronograph is a mechanical watch for close to 2,000 Euros. Does it make sense?

The trend at the brand has been “mechanical mechanical!” for a good set of years now. I don’t mind more mechanical offerings from Swiss Army, but I sure hope that doesn’t mean they are fully abandoning their quartz watch base. Good news comes from pieces like the “new” Swiss Army Original watch that offer a strong look and Swiss quartz movement for an entry level price of around $300. Swiss Army is really popular in the US and I just don’t want them to price themselves out of their own market by going full mechanical with watches from $1,000 – $2,000. The same people who are brand loyalists and want to go from a cheap digital watch to a nicely design steel Swiss watch aren’t gonna stomach a $1,500 piece like they are one at a quarter of that price. 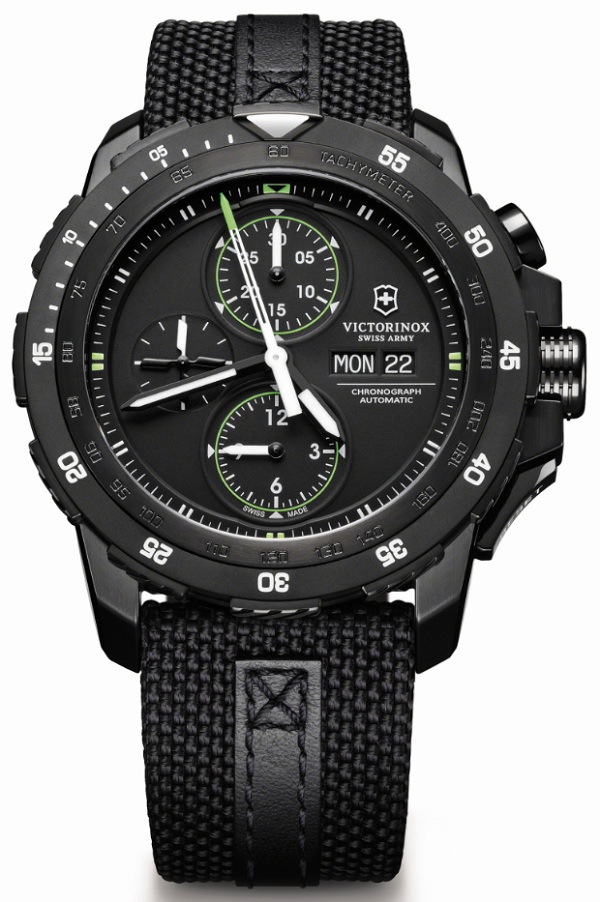 It isn’t just the price which makes it difficult for me to recognize this timepiece as a Swiss Army watch. It feels as though it is more concerned with image and looking macho than it does being legible and “active classy.” That just isn’t the Swiss Army watch that I know – that likes to mix sober legibility with a slick European design aesthetic. This watch even has one of those ridiculous names that we like to make fun of. “Black Ice Chronograph?” At least I know the Alpnach is related with rescue helicopters. With that little connection Swiss Army seems to borrow one of Hamilton’s less effective tactics seen in watches like the “X-copter” or whatever they call it. None of this design is really functional, but seems to suggest some abstract macho lifestyle. The 44mm wide steel PVD coated black watch is just a miss-mash of testosterone. It looks like a toy watch for 12 year-old boys playing army. Swiss Army is just plainly a more mature and refined brand than that. I don’t know what they are going for here.

Inside the watch is a Swiss ETA Valjoux 7750 automatic chronograph any Swiss Army enjoys using. Note the less than original (at this point) use of a propeller style subsidiary seconds hand. The seconds hand for the chronograph feels too large, and while I like the mix of black, white, and red colors, there doesn’t seems to be a purpose to the design. Oddly enough the dial feels both bare and cluttered at the same time. Legibility is fine – but nothing close to what I have come to expect from Swiss Army timepieces.

Reports indicate to me that Swiss Army has a new designer – who has been pushing stuff like this. If that is true then I get it. Someone new comes in and tries to mix it up a bit for better or worse. I just hope that they learn their lesson soon because watches like this simply aren’t going to attract the right customers and might just harm Swiss Army’s solid customer base that will not only feel luke-warm to this design, but will be alienated by the high price for such an underwhelming design that in my opinion lacks the brand’s true purpose and spirit. I want to see more nice affordable watches like the “Original” as well as more purpose built in to higher-end watches that genuinely feel like special upgrades from the brand’s bread and butter.