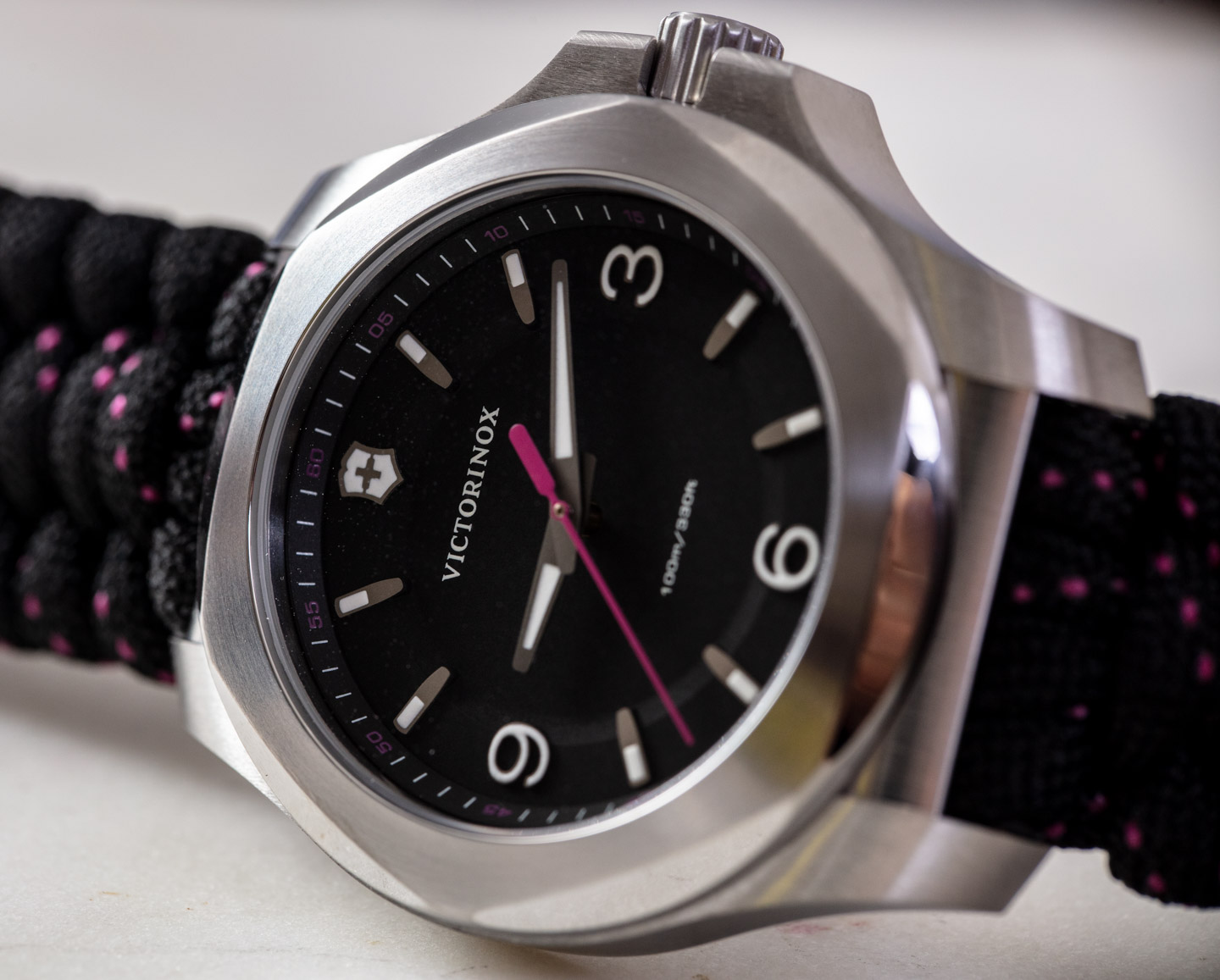 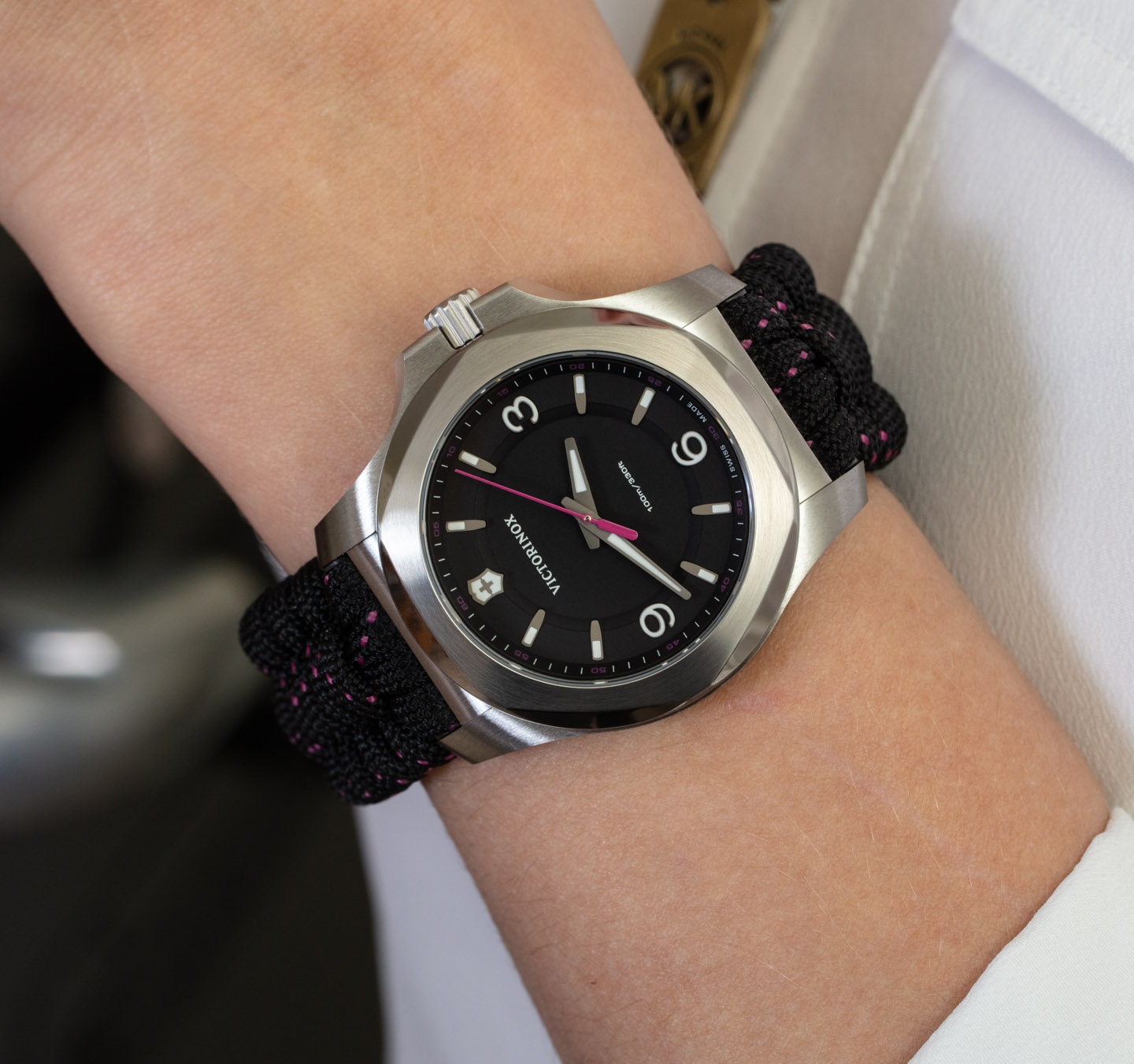 In fact, Victorinox Swiss Army claims that the new INOX V (I.N.O.X. V) is 33% thinner and also 32% lighter than the original INOX V models. Having had experience with the previous INOX V model, I can say that the new INOX V certainly feels different in the hand, even though all the things I’ve liked about the watch (style, durability, and dial boldness) remain. 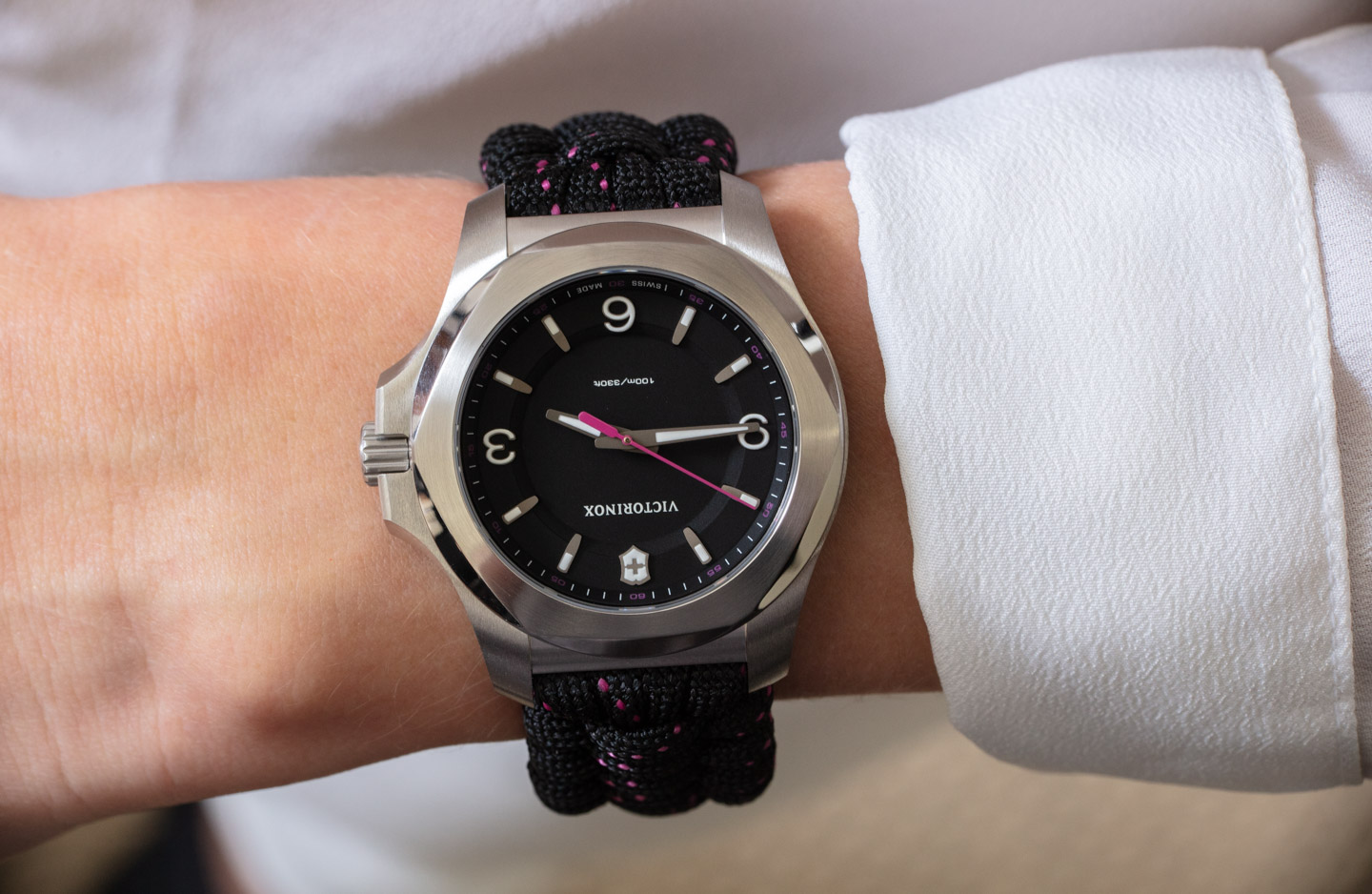 Victorinox Swiss Army maintains the same 100 meters of water resistance and sapphire crystal over the dial for this new generation INOX V collection. The company has also started to offer the popular paracord strap in women’s form for the INOX V, but the more traditional rubber strap option is also available, depending on the version. As seen, this is the Victorinox Swiss Army INOX V reference 241918, in natural polished steel with black and pink color accents.

Victorinox Swiss Army also includes a matching pink removable plastic case protector, which is a core part of the INOX collection (though I don’t know how often consumers use them). What I think is more appreciated in the kit is a strap extension. Even though the stock strap fits the wearer in the photographs well, the strap extension is necessary for women who have bigger wrists — and it is nice for Victorinox Swiss Army to include it with the kit. 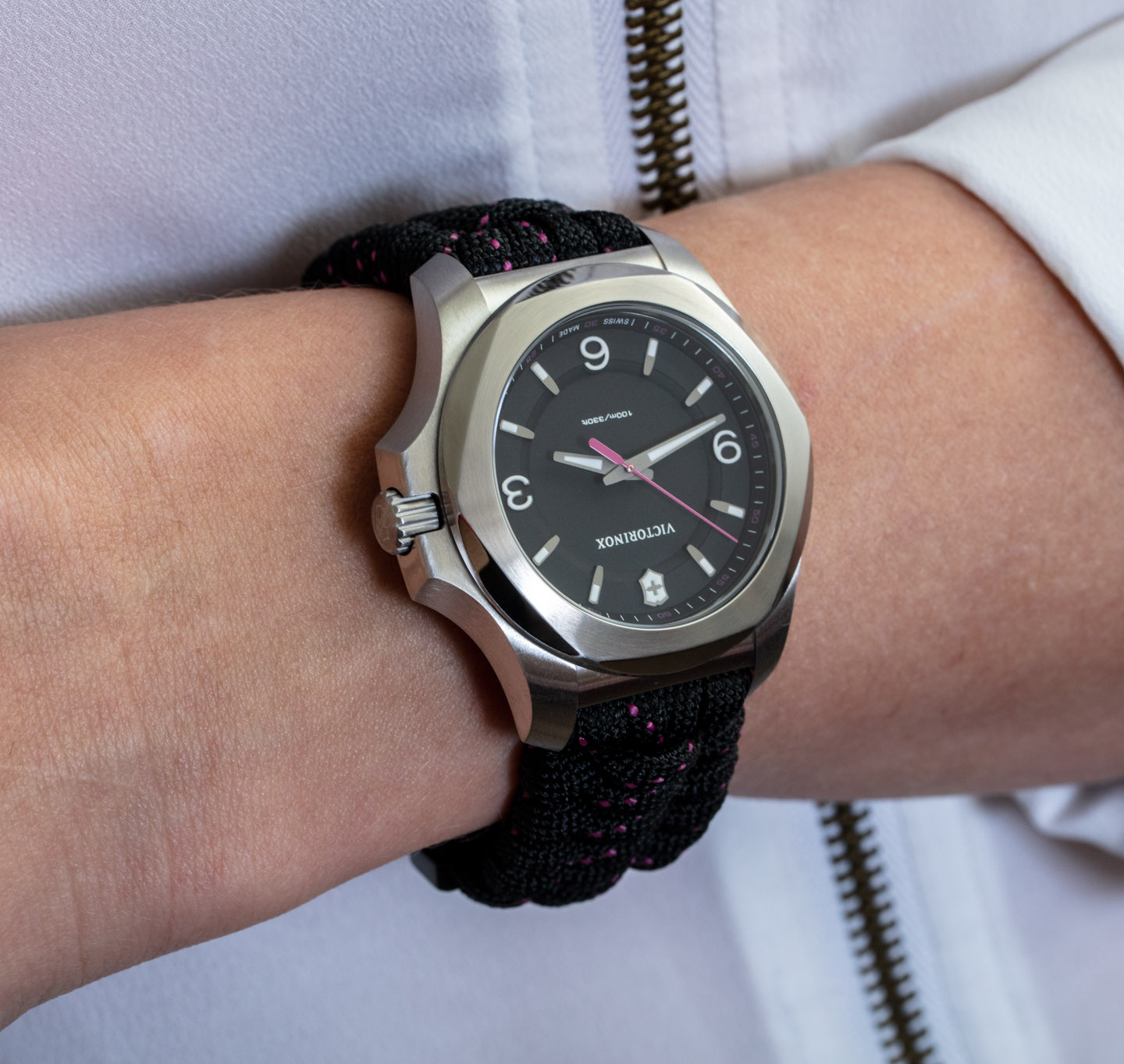 Paracord straps became popular as survival items because, in an emergency, the strap can be unraveled and the paracord string lengths can be used for various survival purposes. Later, the straps became popular for their look and likely suggestion that the wearer enjoys an active lifestyle. Last year, I reviewed the men’s version of the Victorinox Swiss Army INOX on a paracord strap (on aBlogtoWatch here), and I think the concept translates very well for a women’s watch.

One of the interesting ways Victorinox Swiss Army says it upgraded this modern generation INOX V is in the crown design. I’m not sure what is different, but apparently, at least some original INOX V wearers complained that unscrewing the crown could cause fingernails in close proximity to scratch the case, or possibly that operating the crown was causing some people’s nails to break. In any event, here is how Victorinox Swiss Army explains this watch model’s improvement: “enhanced scratch resistance on bezel and unscrewed crown to limit nail breakage.” 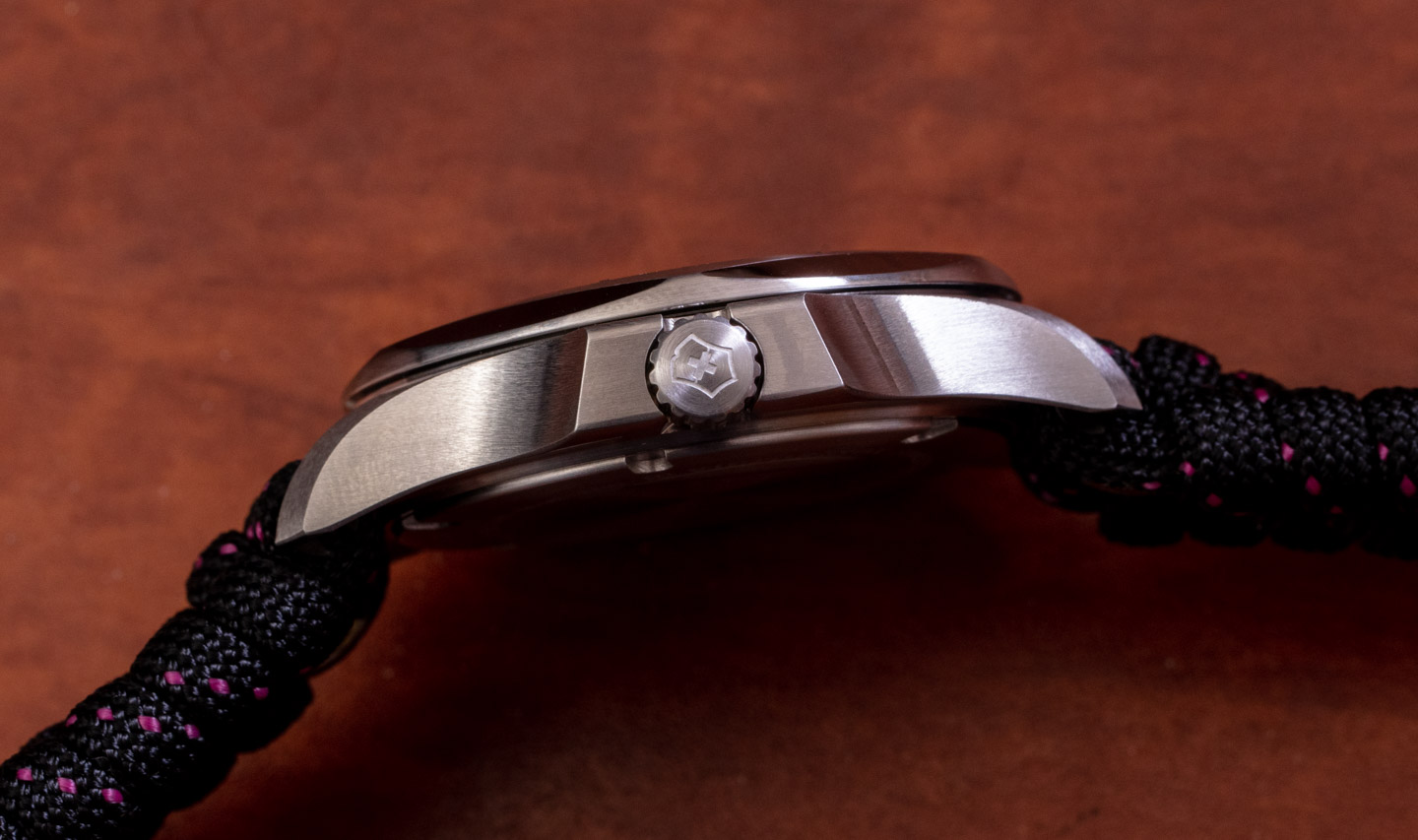 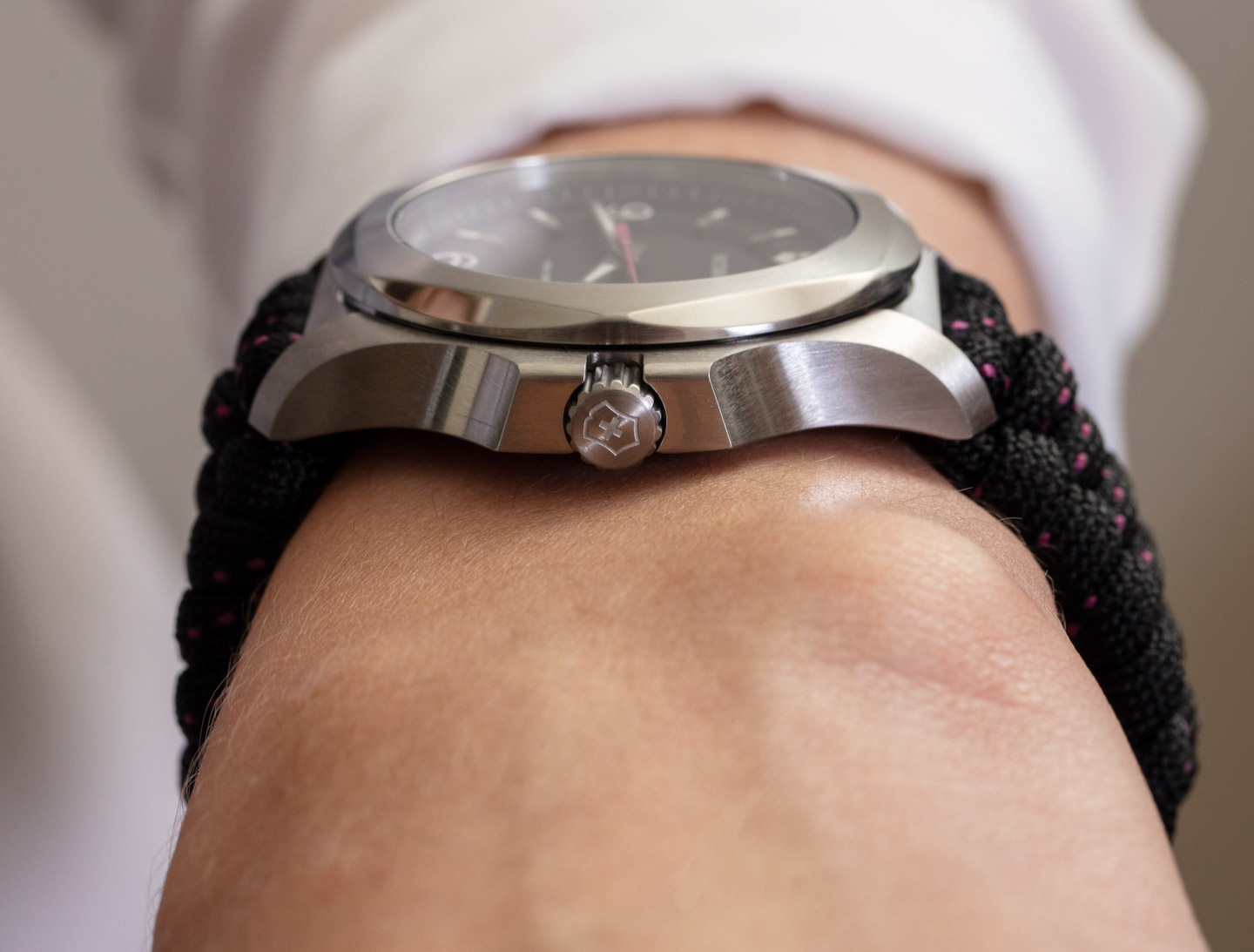 What I’ve always liked about the Victorinox Swiss Army INOX collection is its dedication to being a durable product while also being an attractive one. There aren’t too many “pretty” women’s sports watches that have as much character and utility as something like the Victorinox Swiss Army INOX V. The modern generation models get a cleaner dial that uses both excellent dial materials and polishes and very attractive proportions for the hands and hour makers. The way to immediately tell the difference between the older- and newer-generation INOX V watches is that the new generation models have a mixture of Arabic and baton-style hour markers. The INOX V dials also come in a few colors, while the 37mm-wide case comes in natural steel or a PVD-coated yellow-gold tone. 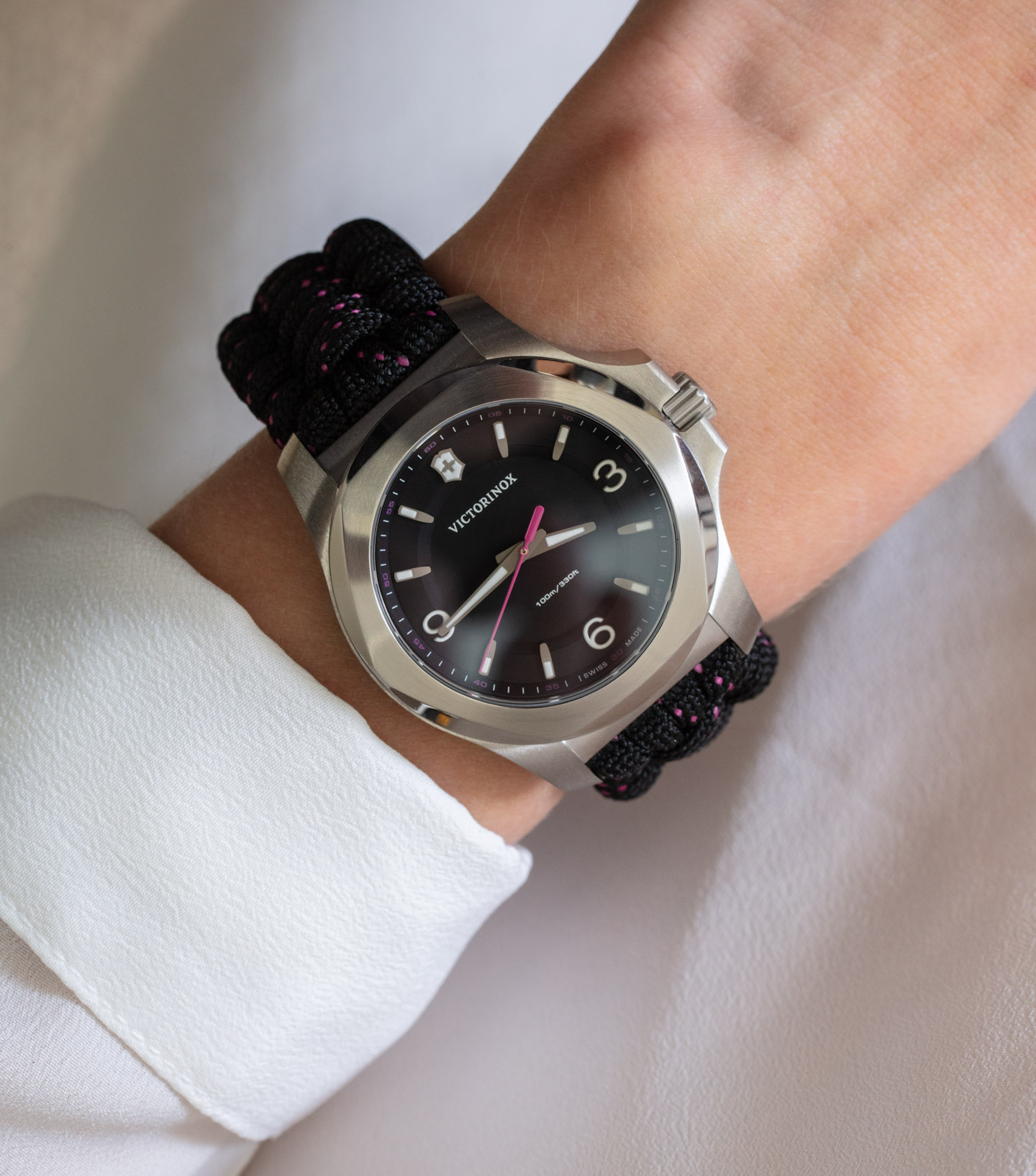 Inside the INOX V is a Swiss Made Ronda quartz movement. To keep the dial experience simple and attractive, the INOX V dial indicates only the time with seconds (no date window). It isn’t always the case (no pun intended) that a watch originally designed for men can also prove to be a good look for women when produced in a smaller size. That said, I think the differences (such as the thinness of the case and dial design) Victorinox Swiss Army created in the INOX V versus the core INOX for men (which itself comes in a few styles) give this women’s model a personality of its own. Pictured in this hands-on article is the Victorinox Swiss Army INOX V reference 241918, which has a retail price of $595 USD. On a rubber strap, the INOX V retails for  $550 USD. Learn more at the Victorinox Swiss Army website here.