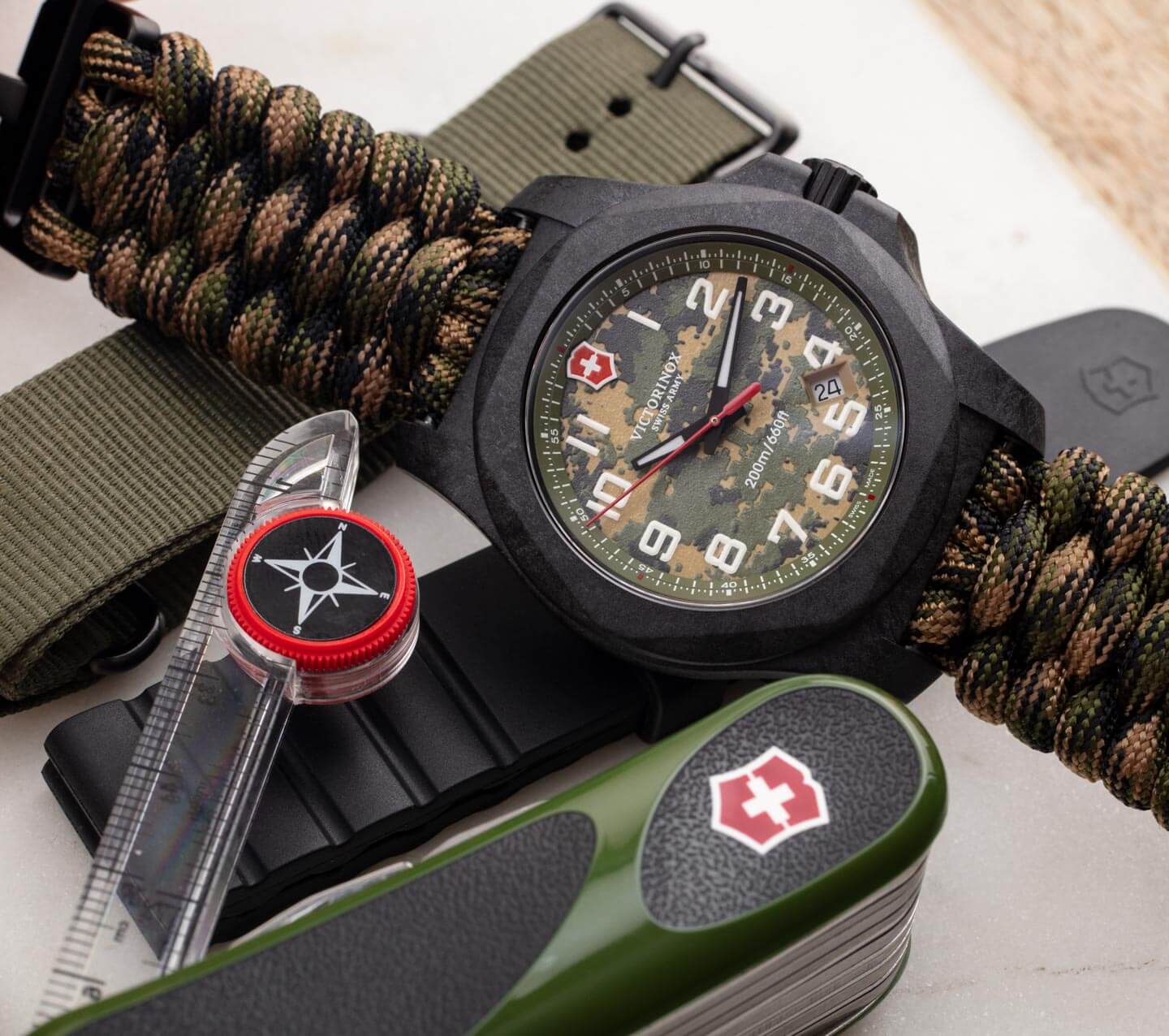 The indistinctively named INOX Carbon LE 241927.1 is one of the coolest new Victorinox Swiss Army watch sets in recent years and aptly captures an aesthetic that is currently popular. With more Americans (and people around the world) venturing to local nature in order to “get away” versus the traditional airport vacation, camping and military-style gear are ever-so-in. I’ve probably written more about the Victorinox Swiss Army INOX (aka I.N.O.X.) watches than anyone in the world, tracking the original debut of the attractive durable watches and then having seen the evolution of the line along with its many limited editions. The short story is that the INOX watch family has been very successful for Victorinox Swiss Army and continues to appeal to fashion and collectible watch enthusiasts around the world.

This particular INOX limited-edition watch comes with a black carbon case that replaces the steel or titanium construction of other INOX watches. “Inox” is actually a term for stainless steel. The carbon case is desirable because of its attractive organic texture, soft touch against the skin, and light weight. It also offers a relatively high level of shock resistance. The INOX watch collection is generally about high levels of durability. One way to think of the family would be like suggesting that it is the “G-Shock of Victorinox Swiss Army.” 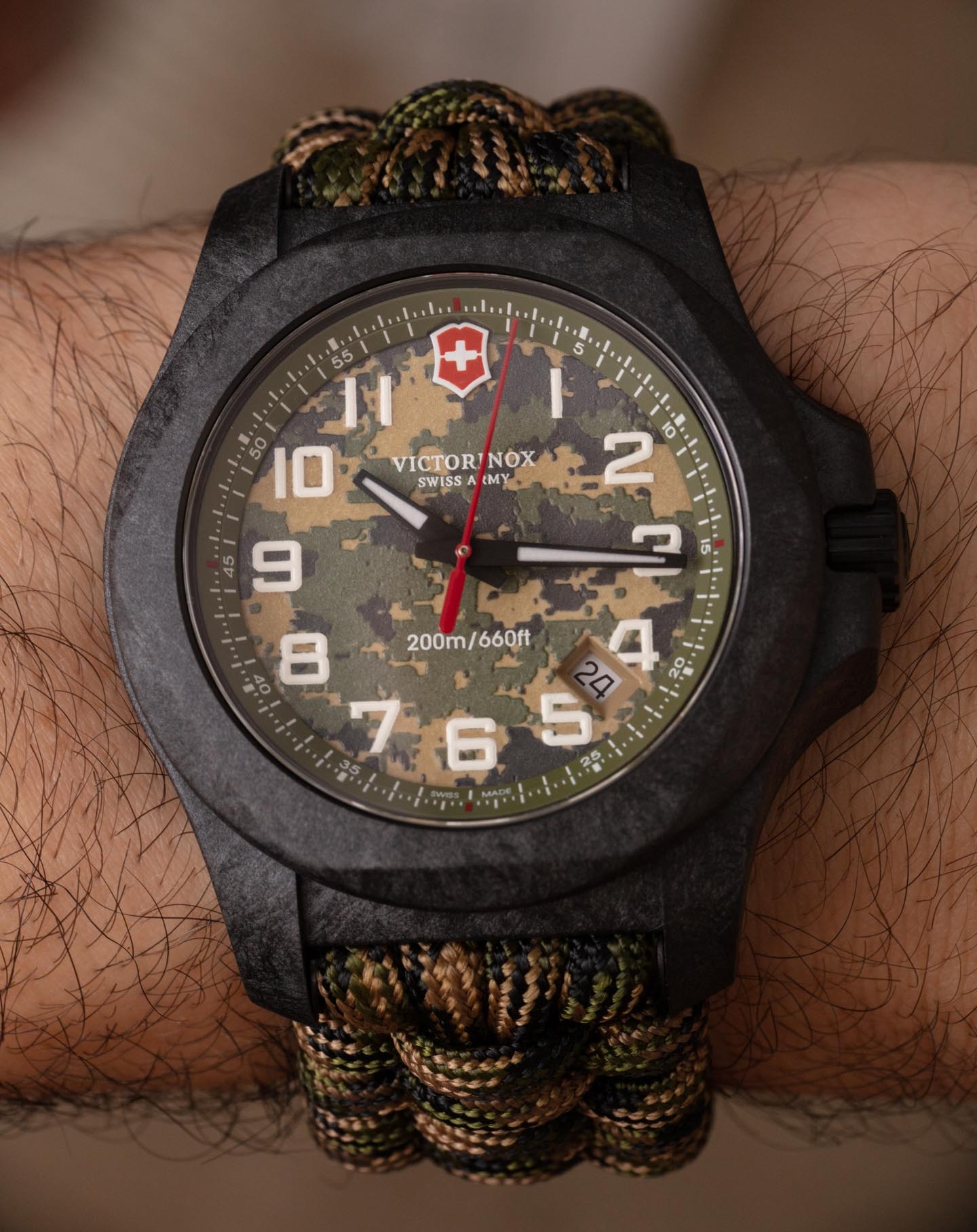 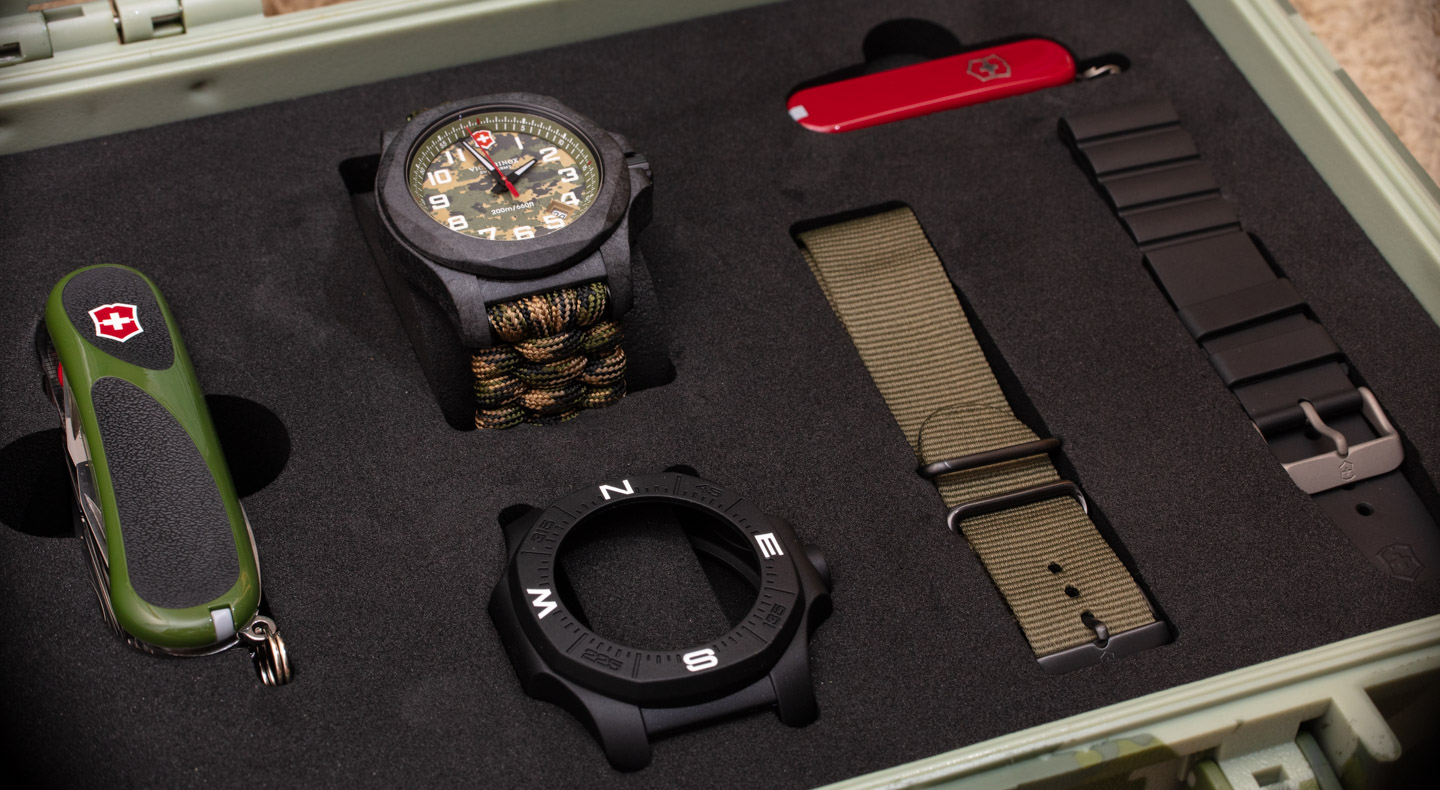 The 43mm-wide carbon case is, for this limited edition, given a new Arabic numeral-based dial and a woodlands camouflage theme. The dial is very legible given the decent contrast and is also evocative of the straightforward design of early Victorinox Swiss Army watches such as the “One.” Another special feature is the fully lumed dial that, when glowing, exposes the design of the camouflage pattern. Over the dial is an AR-coated sapphire crystal and the case is water-resistant to 200 meters. Inside this version of the INOX is a Swiss Made Ronda 715 quartz movement with the time and date.

What makes the Victorinox Swiss Army INOX Carbon LE 241927.1 watch really shine is the kit it comes with. First is the camo-patterned Pelican-style case. Unlike most INOX watches, it comes with three straps. It also comes with a matching camping Swiss Army knife (with compass) and an extra classic red Swiss Army knife for good measure. In 2017, Victorinox Swiss Army worked with Naimakka to introduce its first Paracord strap (and the carbon INOX case). Since then, the strap concept has been refined, and on this INOX Carbon LE model, the paracord strap is also a comfortable and easy-to-wear watch strap. The paracord is camouflage in style, and the kit also comes with a khaki green NATO-style strap, as well as a black rubber strap. Also included is a black INOX case bumper, which you can fit to the case if you want even more durability and environmental resistance. 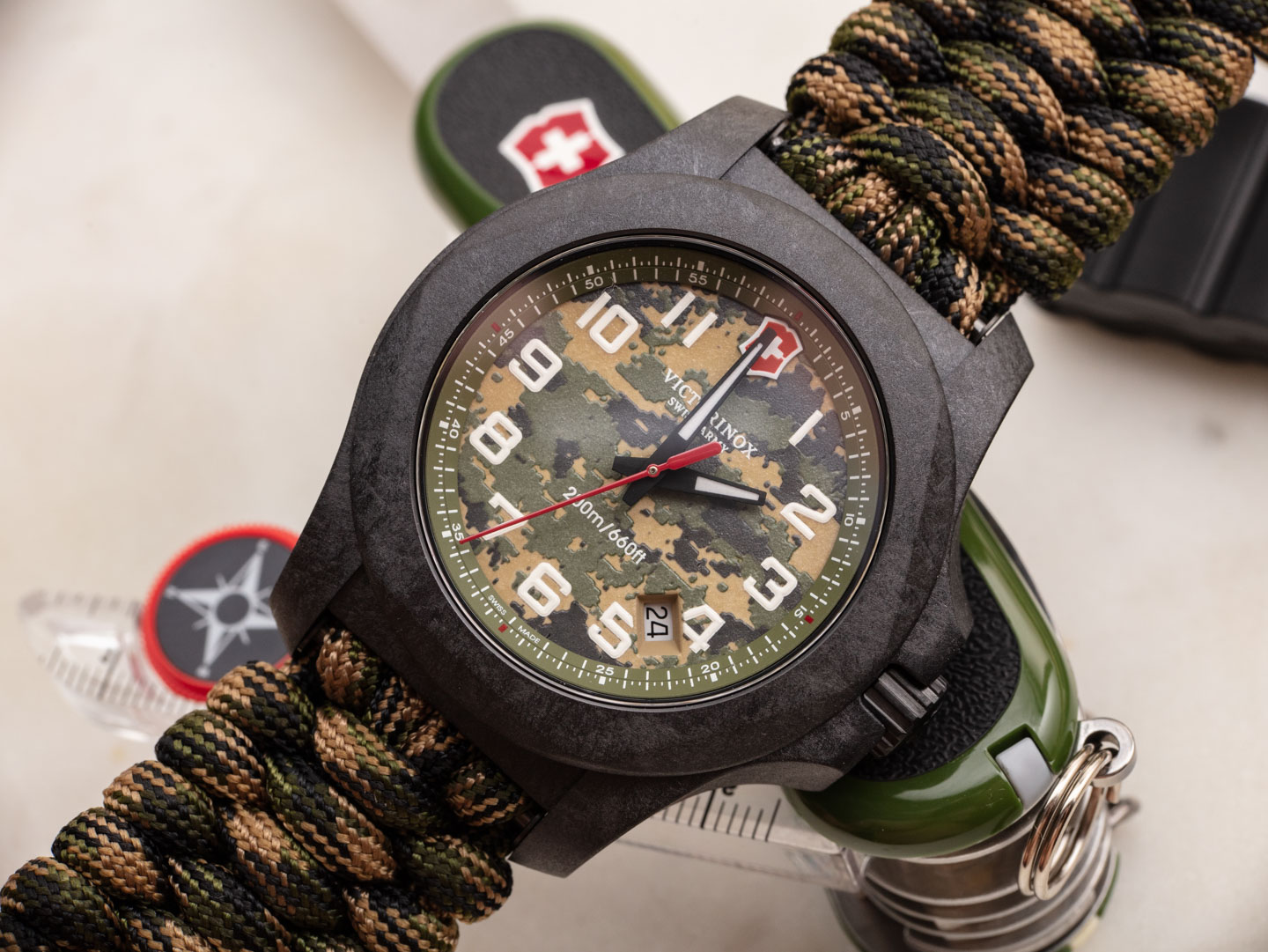 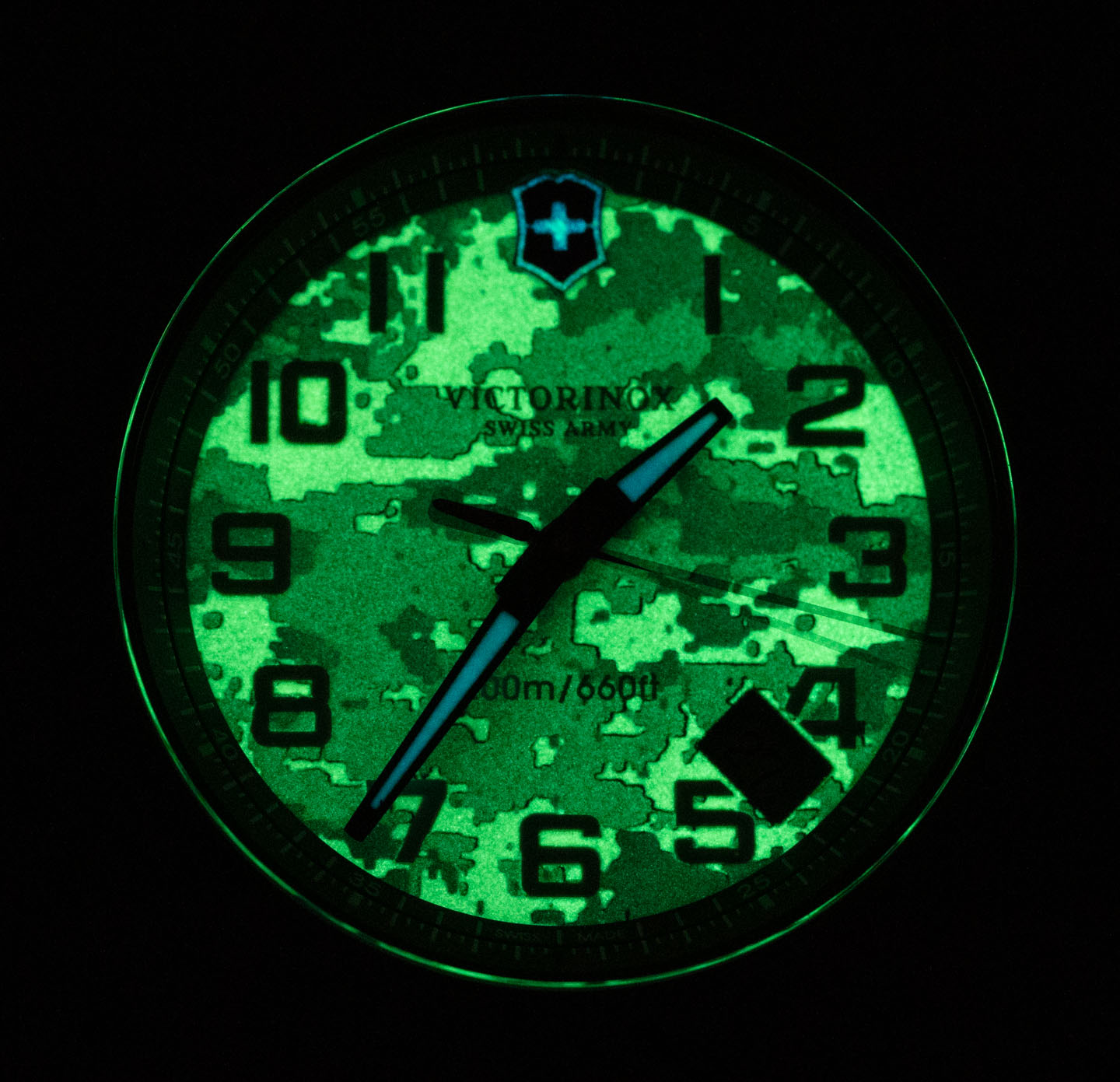 On the wrist, I found the new paracord strap to be a serious upgrade in comfort and convenience versus some of the older designs. In essence, the bottom part of the strap wears like a traditional strap, and the excess strap tucks in between the outer strap and your wrist. One can certainly say that making your product in camouflage is a cliché way of adding a new version. That’s probably true, but this is coming from a brand called Victorinox Swiss Army (so they get a pass, given current trends in fashion). Now, if only Victorinox Swiss Army can figure out a way to make tools pop out of the case. Limited to 1,500 pieces total, the Victorinox Swiss Army INOX Carbon LE reference 241927.1 watch is priced at $1,100 USD. Learn more or order at the Victorinox website here.