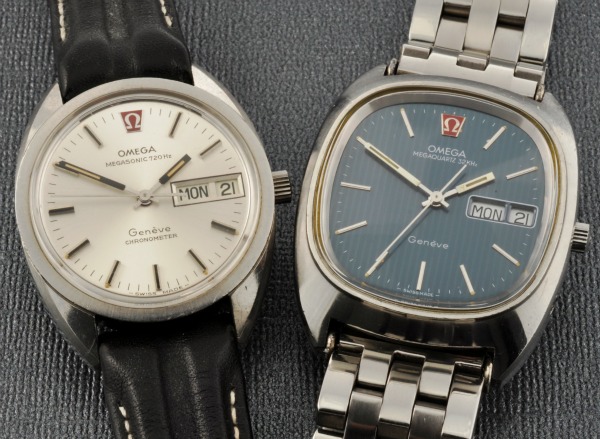 1973 was the year that Omega’s marketing department realized that the brand name contained the word ‘Mega’. The Basel fair of that year saw the launch of both the ‘Megasonic’ and the ‘Megaquartz’- an example of each watch is pictured above.

The MegaSonic 720Hz is a movement unique to Omega and at the time had the smoothest moving second hand, ever. It was designed by Max Hetzel, the creator of the first ‘Tuning fork’ watch (the Bulova Accutron) but it works in a very different way. It has a micro-motor which, in simple terms, is a 1.2mm ruby disc studded with magnets which is shaken between two ruby springs in a sealed, oil-filled box by the tuning fork. This causes the disc to rotate four times per second. This disc is not directly connected to the gear train or any part of the watch but rather uses magnetic gearing to pass on its motion as does some of the reduction gear train.

This is wonderfully mad way to build a watch movement and shows the lengths to which watch brands would go to embrace new technology. An illustration of how the movement works is shown in the clip below.

This staggering ingenuity was soon superseded by the watch launched alongside it – the Megaquartz. This was Omega’s first in-house analogue quartz movement, developed as an alternative to the expensive Beta 21 collaborative effort. It was created in modular form to allow the easy replacement of parts.

You have to wonder at the simultaneous launch of these two watches, one to be a gloriously innovative dead-end and the other to be the first wave of a horological revolution.